John Deere has over 100 years of expe­ri­ence with harvesters – and the first combine is already over 90 years old. To date, we have produced over 750,000 combines, including over 120,000 single rotor machines. This is a short story about a long tradi­tion.

Harvesters have a long history at John Deere. The company entered the reaper-binding industry as early as the begin­ning of the 20th Century. These machines cut the still green grain and bound the stems into bundles or sheaves. These were then collected and threshed six to 10 days later. With a reaper-binder, a person with four horses could harvest 2-2.8ha in a day. John Deere produced around 33,000 horse-drawn harvesters for mowing, raking and tying during the First World War. But the big step towards creating the machine that combines all harvesting steps was supposed to take a few more years.

John Deere’s first combine was still partly horse-drawn, but for the first time it incor­po­rated all harvesting methods in one machine – from cutting to threshing. The firm had care­fully consid­ered tack­ling this tech­nical and economic chal­lenge, as Charles N Stone, former managing director of the harvesting divi­sion, wrote: “Entering the combine busi­ness is a big under­taking. We are well advised that it is better not to enter the busi­ness at all than to enter it half-heart­edly.” 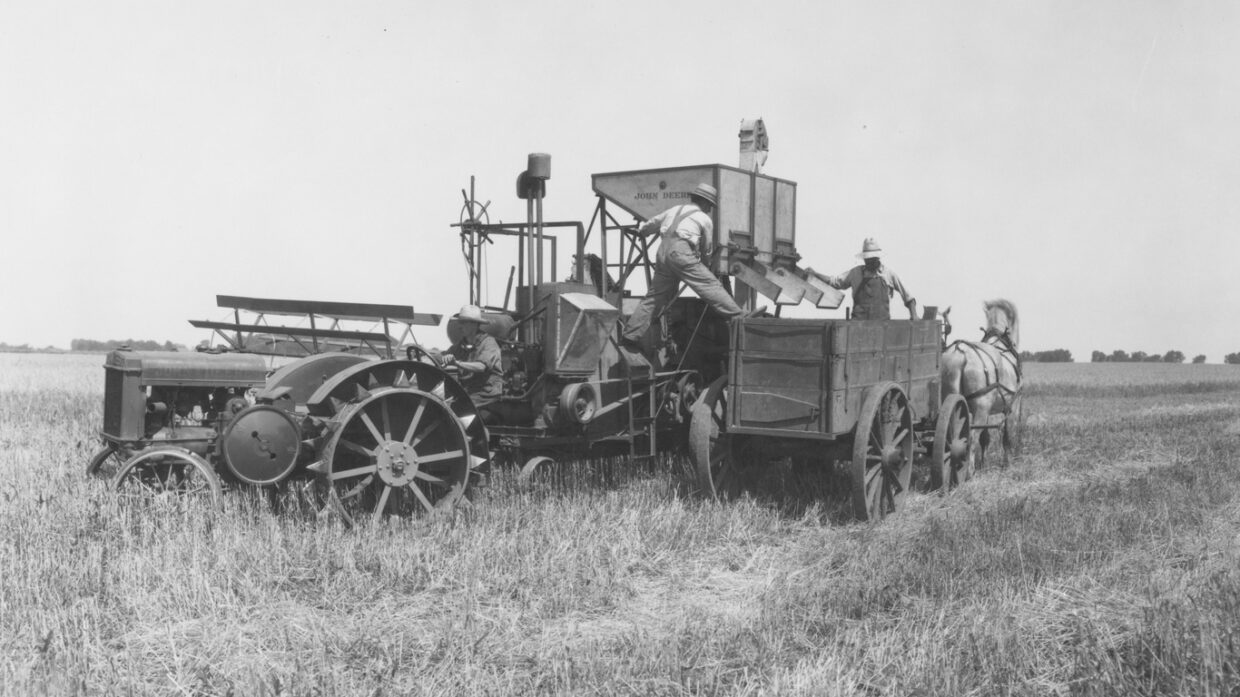 Inter­ac­tion between man, machine and horse: Combine No 1 inte­grated all harvesting methods in one machine for the first time.

The No 36 hill­side combine set the next major mile­stone. Since the machine could be used in many regions, it quickly conquered the market and stayed in the range until 1951 – although the No 36 was still partly drawn by horses. 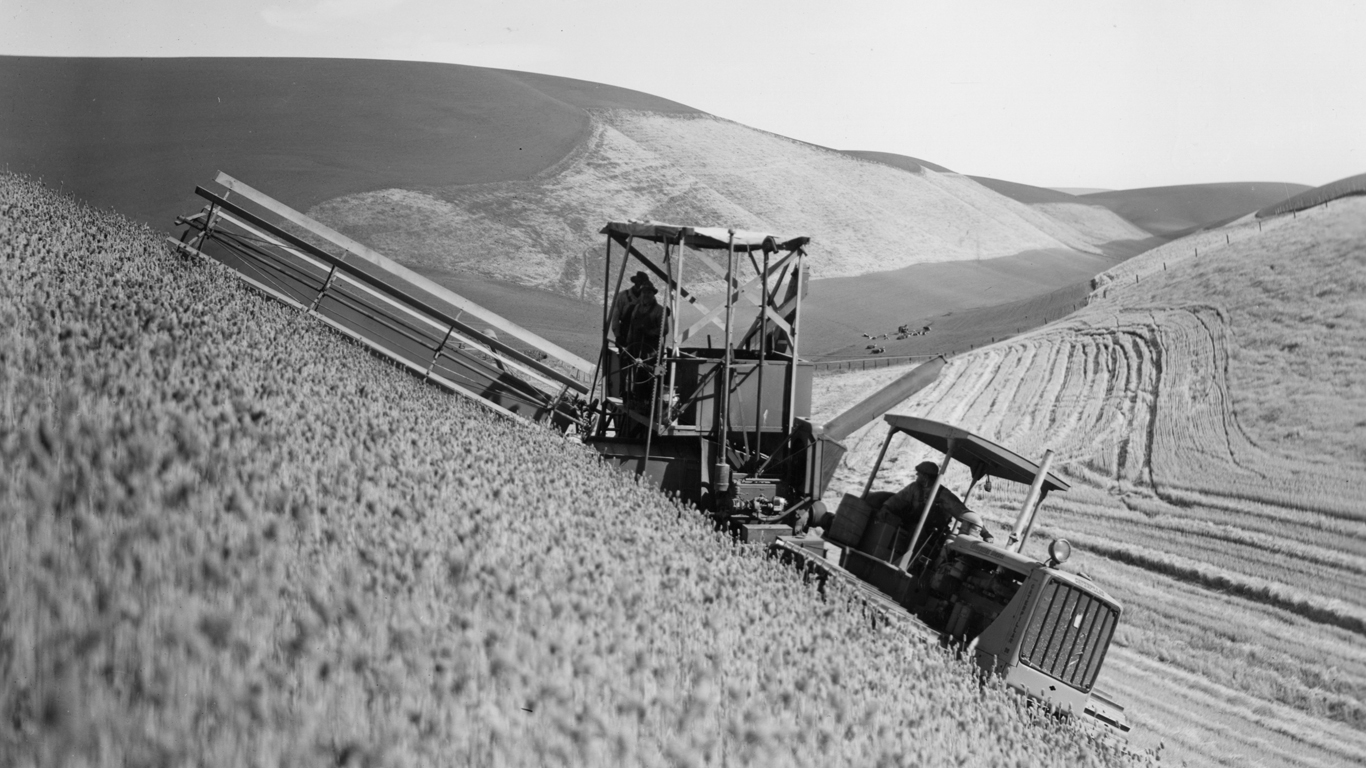 Because of the incline: The No 36 hill­side combine won over farmers in many regions and remained in the range until 1951. 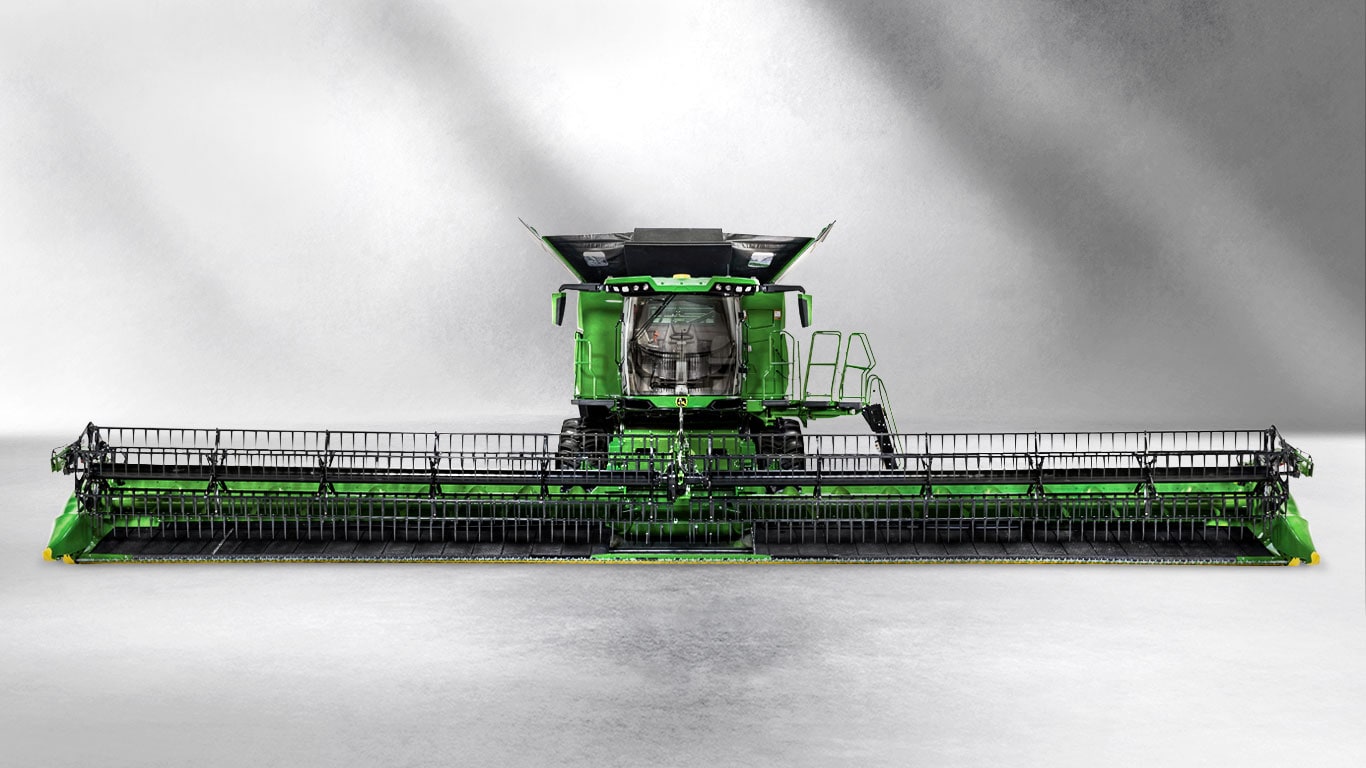 The real deal came 11 years after Model 36: Series 55 was the first self-propelled combine. And the first to place the oper­ator centrally at the top of the machine, with the grain tank and engine behind – an arrange­ment that has proven itself to this day. This setup ensured both a better weight distri­b­u­tion and a clean, quiet oper­a­tion. The selec­tive speed control, which allowed the oper­ator to regu­late the speed up to 17km/hr, was also inno­v­a­tive.

The fifties: The largest self-propelled machine

From 1954, the No10 corn head cutterbar allowed farmers to cut, skin and clean corn with one machine for the first time. This meant that up to 8ha could be harvested every day. And just three years later, John Deere launched the world’s largest self-propelled combine: Model 96. The machine, which was also avail­able in in a hill­side version, sold nearly 40,000 units by 1969. 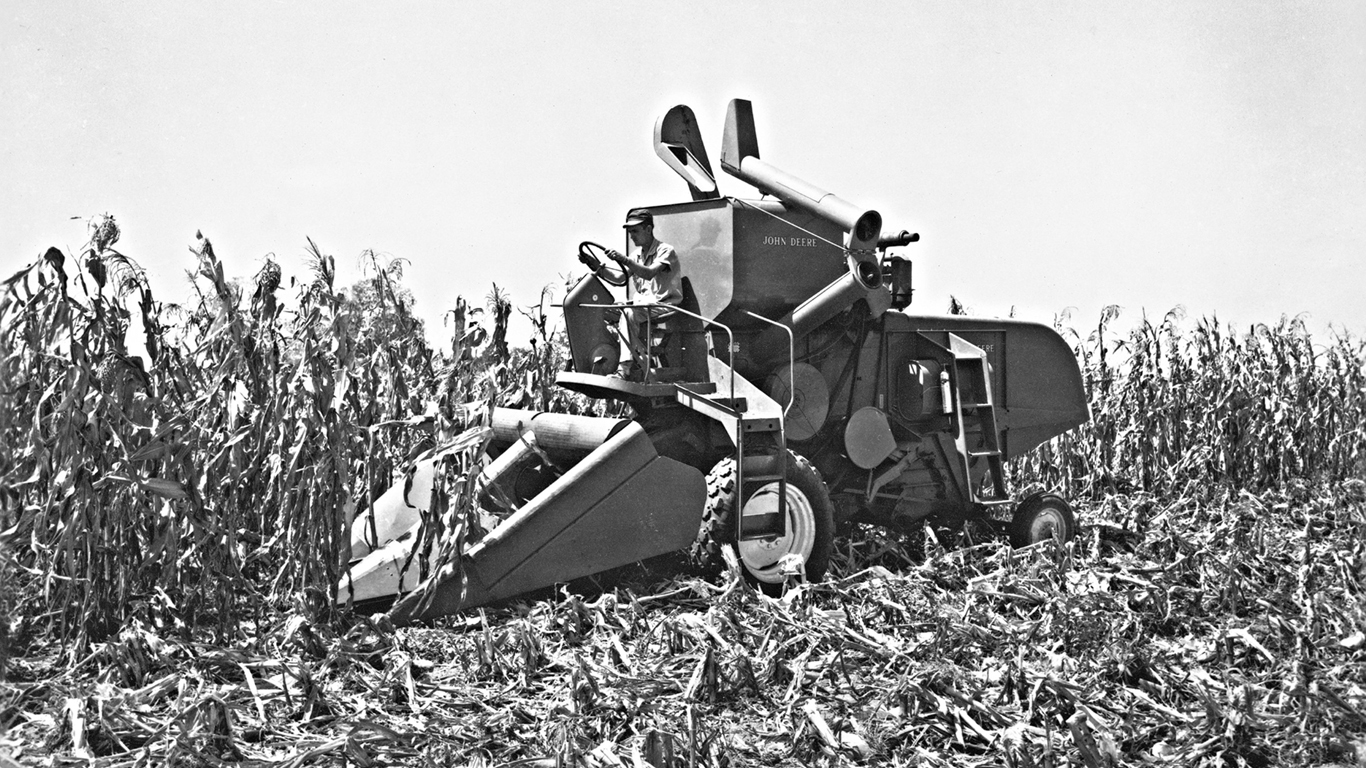 The first self-propelled combine from the 55 Series – shown here with a No 10 corn head cutterbar.

In the 1970s John Deere started intro­ducing five new combine models: A trailed model and four self-propelled models. What they all had in common was the use of the ”Quick Tatch” system, which made it very easy to change the different harvesting attach­ments for various types of grain. 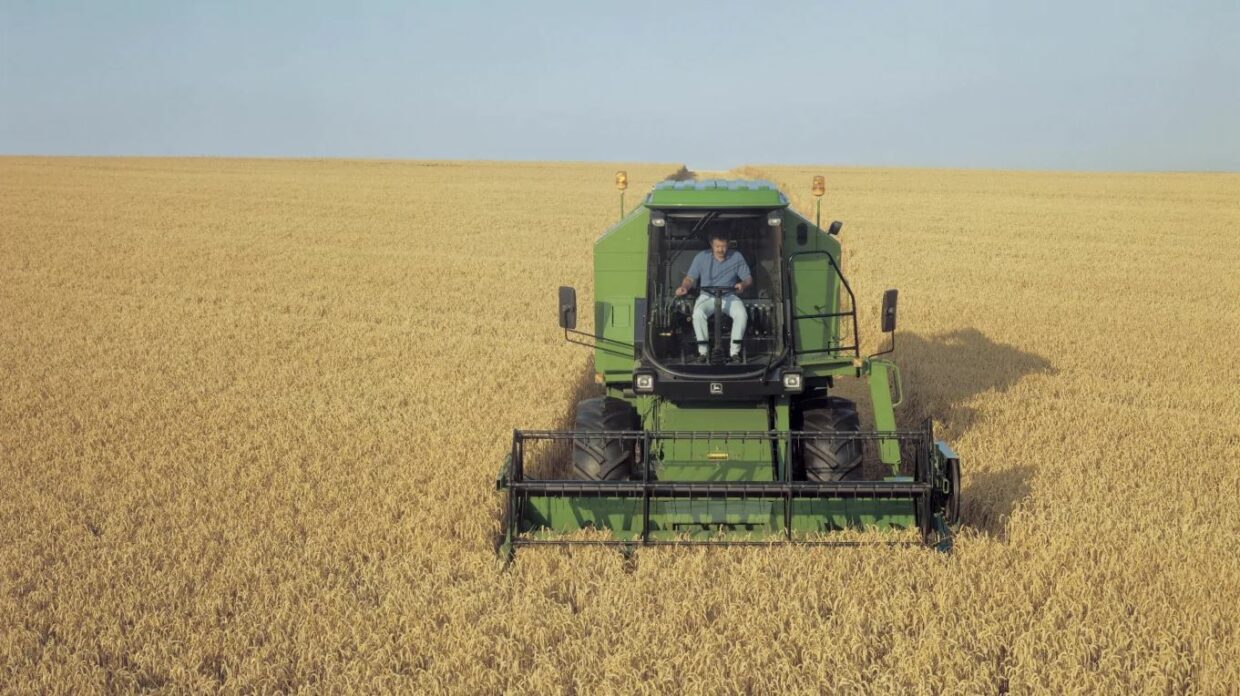 The one with ”trick without kink”. The T-Series from John Deere sets stan­dards in terms of crop flow.

In 1992, John Deere had another triumph in the combine market: The CTS was the first hybrid combine world­wide. When the patent protec­tion expired, all other manu­fac­turers followed suit. Shortly before the turn of the millen­nium, another perfor­mance boost followed with the STS single rotor combine: The Single Tine System enabled more throughput with less power consump­tion. 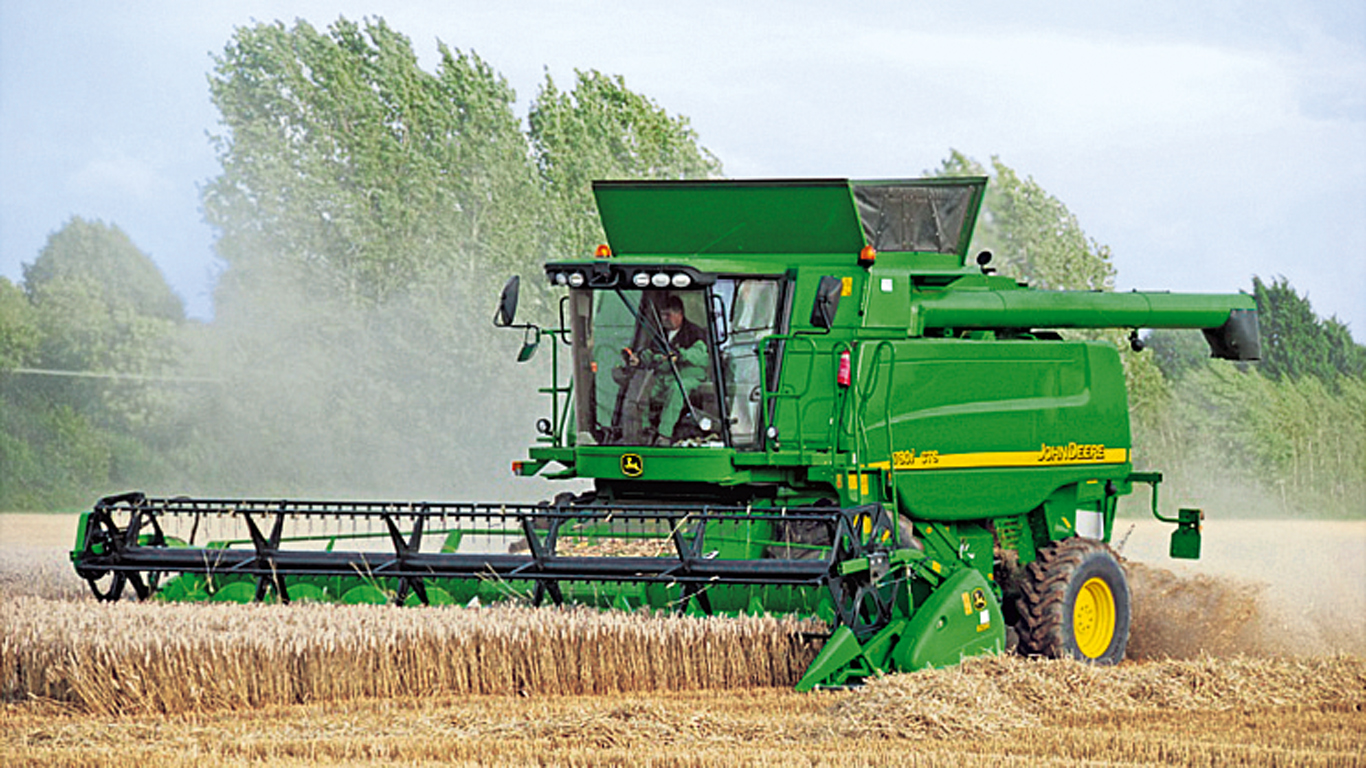 The first hybrid combine in the world: The CTS from John Deere. A role model for all other manu­fac­turers.

In 2007, the T-Series was launched with an extra-large, active sepa­ra­tion area and ”the trick without kink”; a new crop flow system above the turning drum for maximum straw and grain quality. This is still unique among straw walker combines. Along with the wide range of cutting units, the T-Series delivers outstanding threshing results on any terrain and any crop. Three years later, the 500,000th self-propelled combines came off the factory 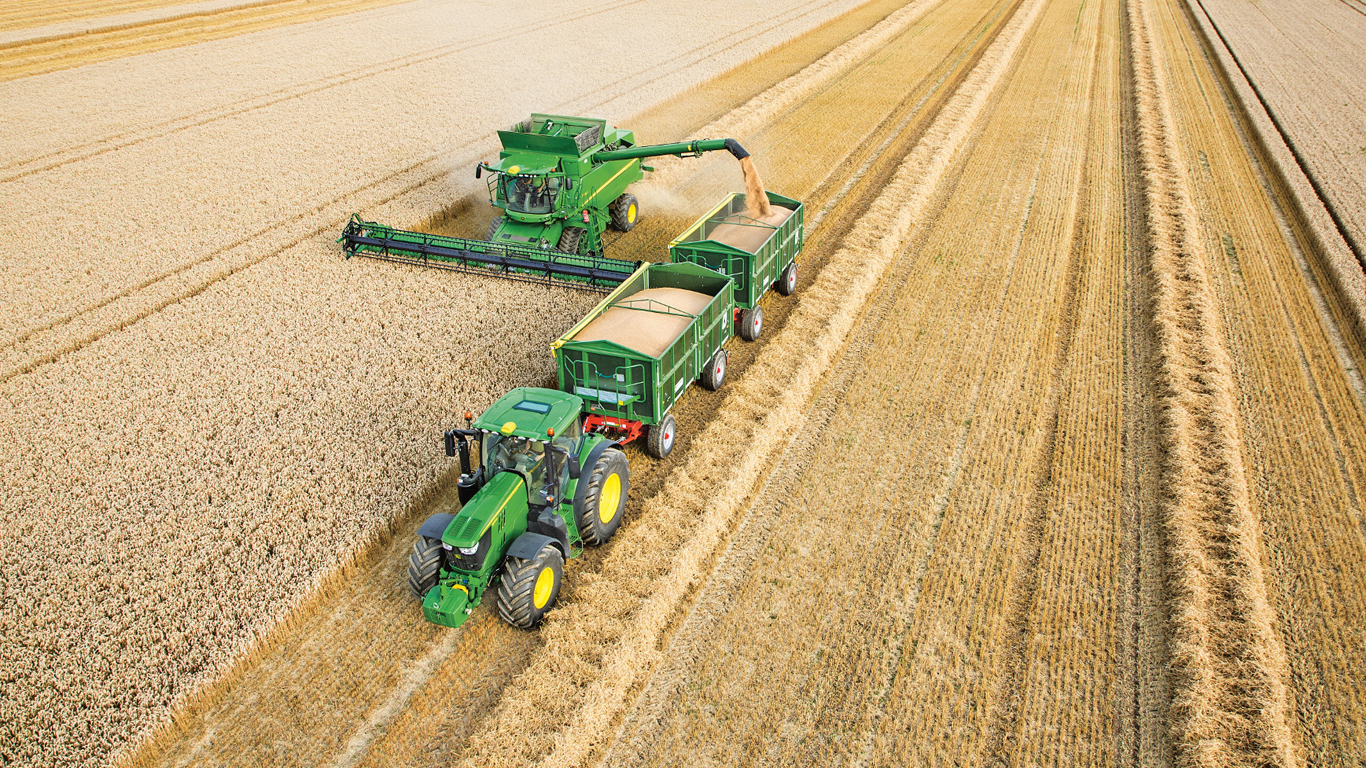 The one with ”trick without kink”. The T-Series from John Deere sets stan­dards in terms of crop flow.

In 2015, John Deere was awarded a silver medal at Agritech­nica for its Active Yield System; which auto­mat­i­cally cali­brates yield detec­tion, and for the ICA2; the auto­matic combine adjust­ment system with two cameras to monitor the clean grain and tail­ings eleva­tors for broken grain detec­tion. This tech­nology went into series produc­tion with the S700 in 2017. 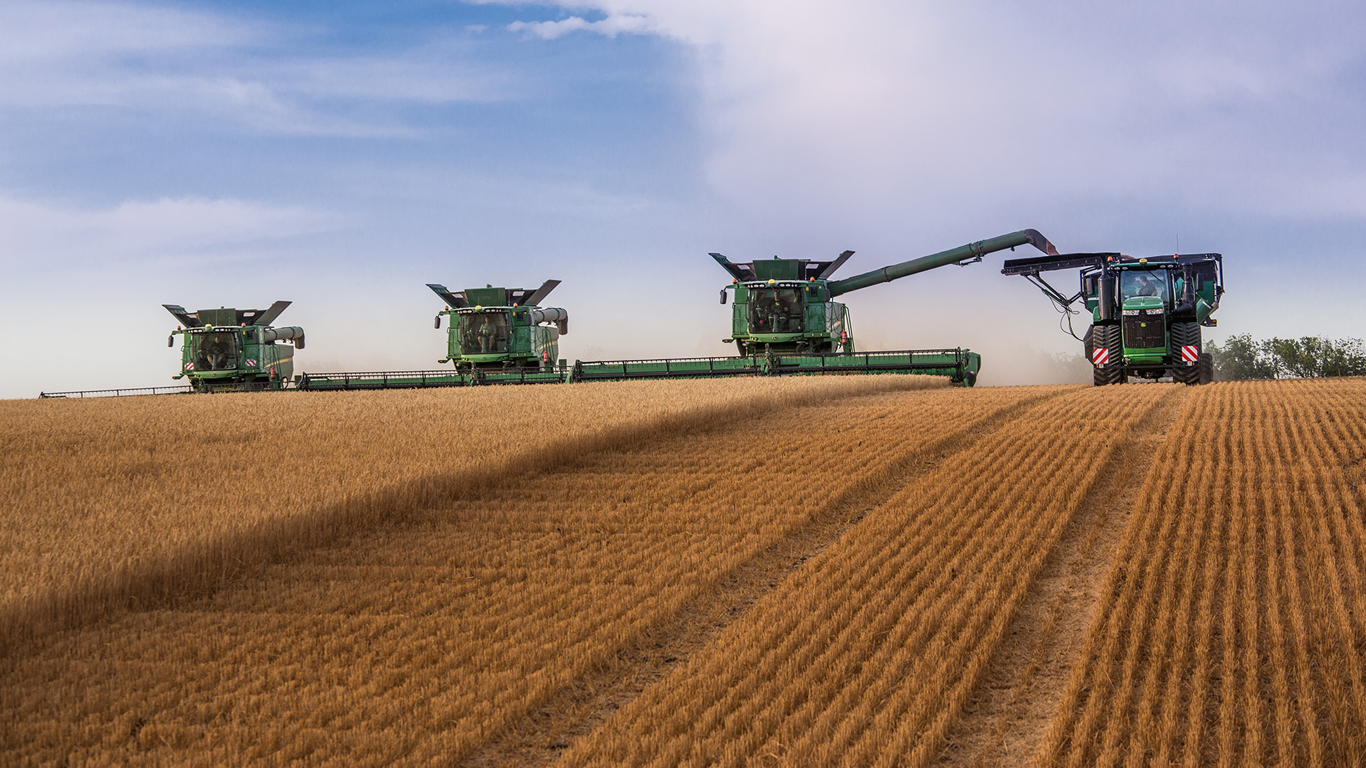 The S-Series comes as stan­dard with the award-winning Active Yield, auto­matic cali­bra­tion and ICA2 systems.