Cuba is allowing more and more private enter­prise and is seeking normality in its rela­tions with the US. Agri­cul­ture is also changing as a result.

Jorge Lorenzo looks over his pastures and fields in the province of Sancti Spir­itus, Cuba. Behind him, the big leaves of the teak trees that grow in the adja­cent forest rustle in the warm wind. “Marabú weeds grew every­where here, it took us weeks to rid the land of the bushes,” he says. The farmer pushes his hat back from his fore­head and strokes his checked shirt. “Now cattle graze here.” In addi­tion, on his 9ha Mr Lorenzo grows feed for his animals, as well as cassava, sugar cane, vegeta­bles and fruit. The 50-year-old also keeps chickens and pigs.

The dense, head-high Marabú bush must be pulled out by the root, or it will grow rapidly again after clearing. This mimosa plant, intro­duced from Africa, has over­grown on more than 1.2m ha in Cuba, mostly across the 6.3m ha of agri­cul­tural land. The bushes were able to spread when land use fell sharply due to the economic crisis of the 1990s, trig­gered by the collapse of the Soviet Union. The Caribbean island lost its main customer for the sugar produced over large areas – as well as its supplier of subsidised oil, fertiliser and pesti­cides. Trac­tors and harvesters stood still. Agri­cul­tural produc­tion plum­meted. Added to this was the tight­ening of the US economic embargo, which meant Cuba suffered from wide­spread food short­ages. 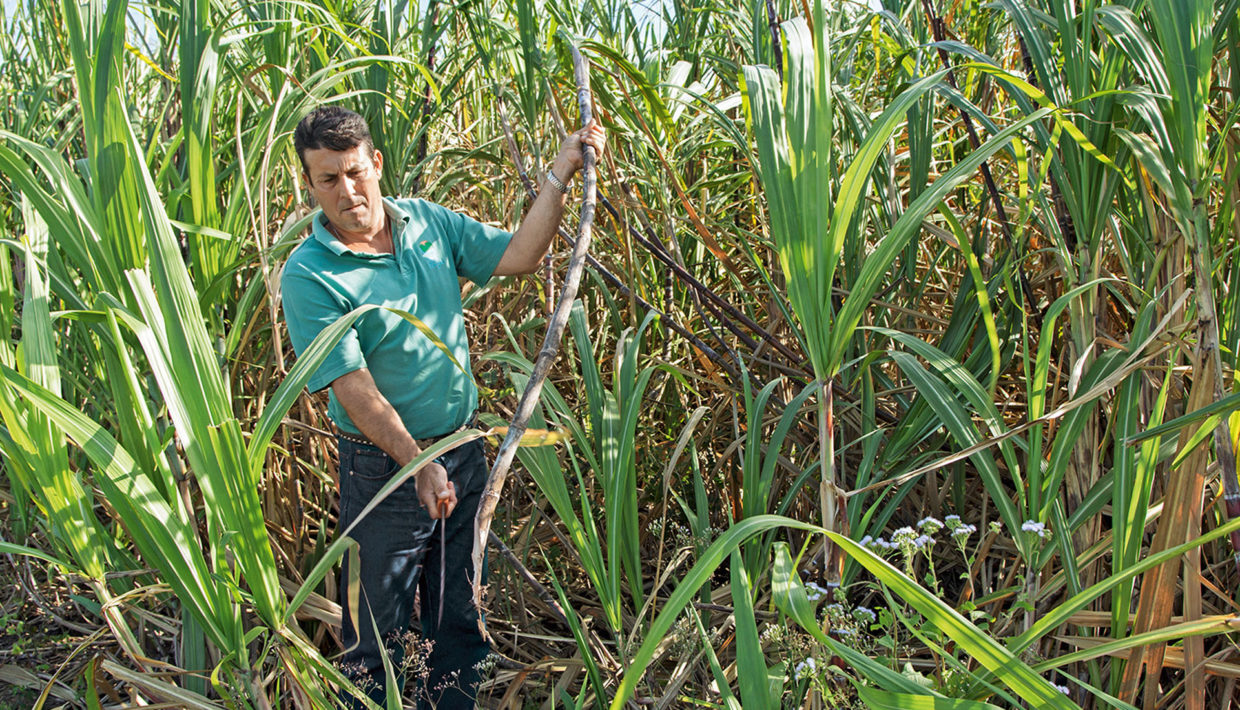 Concen­trate feed “Made in Cuba“ single-hand­edly harvested with the machete. 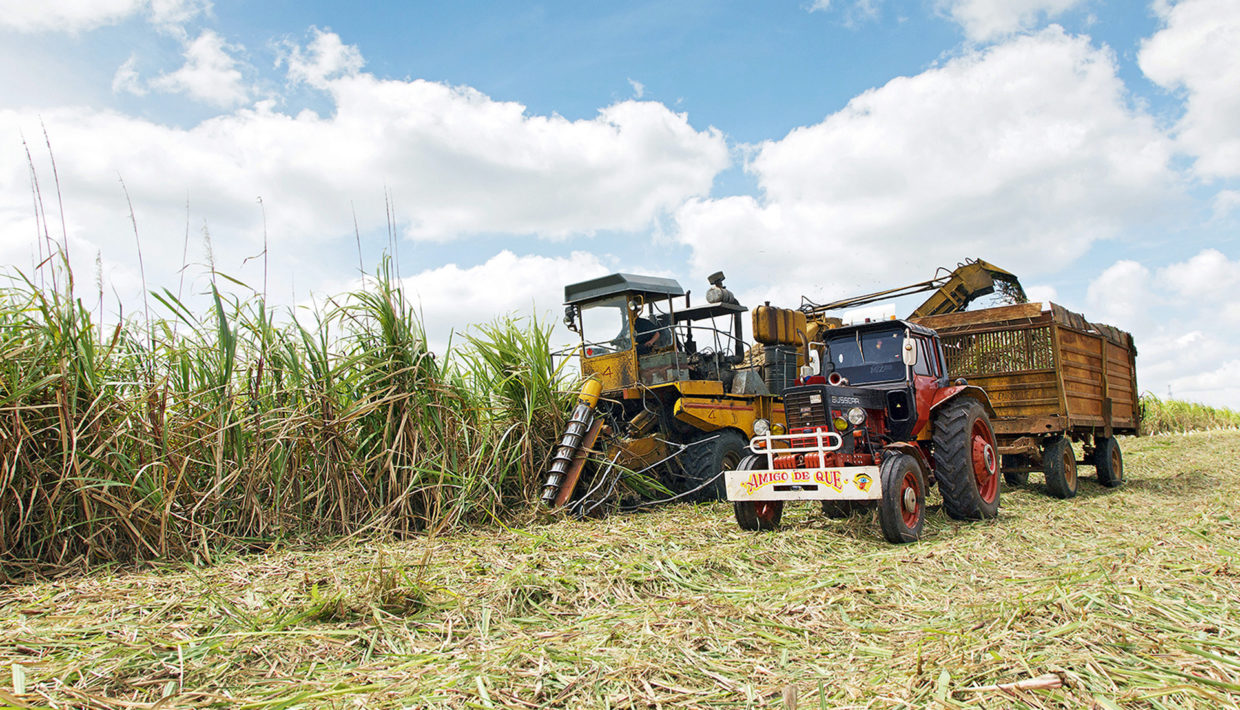 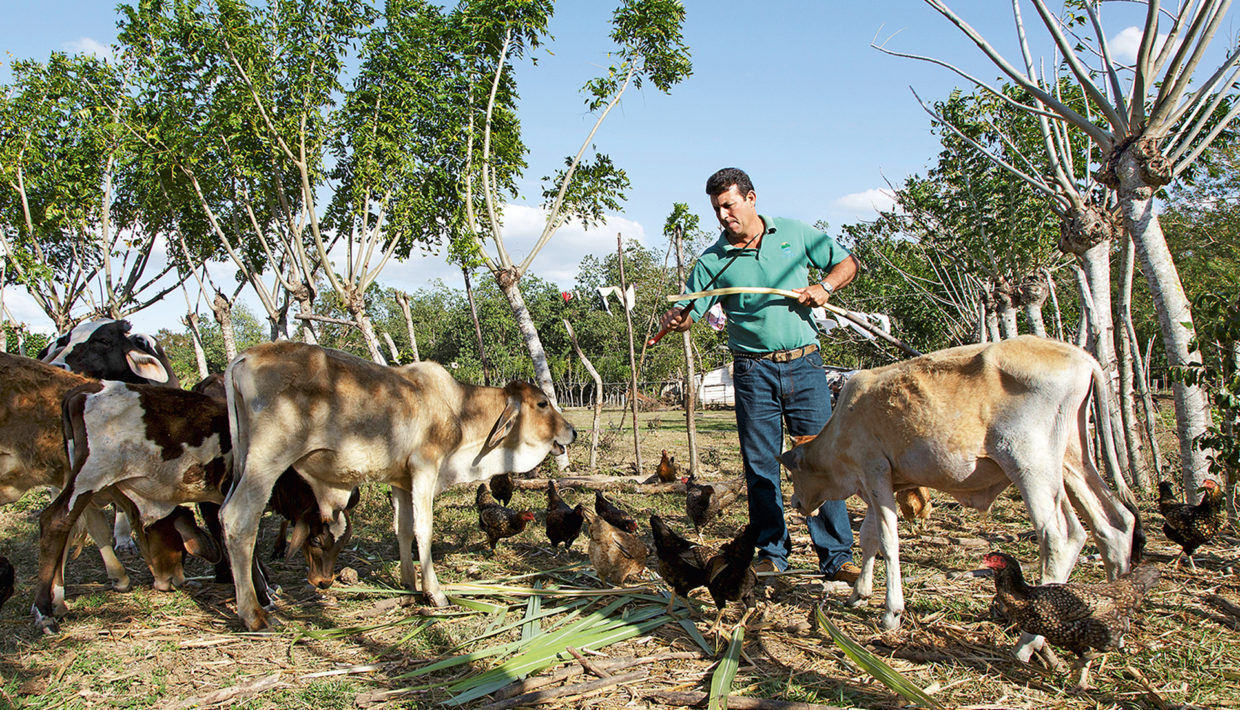 To increase the produc­tion of food in the country, even under Fidel Castro many of the large state farms were wound up, fields were made larger and the farms were organ­ised into large co-oper­a­tives. However, to this day these Unidades Básicas de Produc­ción Coop­er­a­tiva (Basic Unit of Co-oper­a­tive Produc­tion, UBPC) may not operate truly econom­i­cally inde­pen­dently; for a long time they had to sell their harvest at fixed low prices to the state. 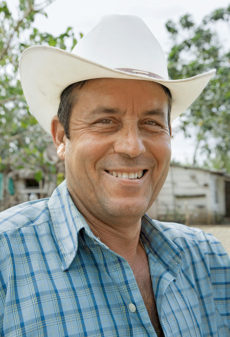 Only in 2008 was reform intro­duced under Raúl Castro, which allowed some­thing akin to private farming. Since then, vacant land has been awarded to indi­vid­uals. Initially, they got the land for a period of 10 years, however, today 20-year contracts are common.

“The doors are now open for us,” says Mr Lorenzo. He has been culti­vating his 9ha for about ten years, pays no levy and his turnover is taxed at 5%. This is not the only reason for his success. “We have repaid our loans and we have plenty of good food for the whole family.” The father of two shows off his vegetable field where chilli peppers, leeks, garlic, beans and toma­toes grow. “Every tomato makes me happy,” he says. All citi­zens have free access to educa­tion and medical care, and the state also provides them with basic foods such as rice, sugar, coffee and bread. However, this usually only lasts for one third of the month. And there is a lot missing in the govern­ment shops.

The cultivation of fruit and vegeta­bles for a family’s own consump­tion is there­fore of great impor­tance. On half a ectare Mr Lorenzo produces so much that he and his father Pedro, who helps him on the farm, are able to give the surplus to rela­tives and sell it to neigh­bours.

However, the family makes the most of its income by selling milk. Mr Lorenzo’s cows produce a compar­a­tively modest 1,000l per lacta­tion due to the limited grazing area. “9ha for 35 cows is too little, so I try to compen­sate for this with growing more forage crops,” he says. He is confi­dent he will be able to increase yields, but there is a limiting factor: There are no machines on his farm, as with most other small farms. If he needs a tractor, Mr Lorenzo must hire one from a service co-oper­a­tive. Aside from the farm, Mr Lorenzo is a forestry scien­tist, and he works full­time as a lecturer at the Univer­sity of Sancti Spir­itus. Although the farm income far exceeds his salary, he would like to keep his job. “The work at the univer­sity is very inter­esting.”

We have repaid our loans and we have plenty of good food for the whole family.

Jorge Lorenzo drives in his father’s Moskovich to the pig farm of Joel Matienso. He skil­fully swerves around the deep potholes on the narrow streets. The shock absorbers of the car, which still orig­i­nates from Soviet-produc­tion, groan. The red paint is dull and faded, a long crack perme­ates the wind­screen and the doors jam. But it runs – and provides a valu­able service in a country where hardly anyone can buy a private vehicle.

At the pig farm, Mr Matienso can now also afford a set of wheels – even if it is only two. He proudly strokes the tank of his beau­ti­fully cared-for MZ motor­bike, which was still coming off the produc­tion lines in Zschopau, Germany, in 1989. Despite its age, the machine cost the equiv­a­lent of almost £6,800. “I would never have been able to afford it before, nor the air condi­tioner and TV,” he yells hoarsely over the noise of his pigs and the shredder, with which his two employees are mincing cassava. The farm belongs to the family. “My grand­fa­ther lived here and farmed for his own needs.” But it was the burly civil engi­neer Mr Matienso who profes­sion­alised the oper­a­tion. In 2005 he started with 100 pigs, about ten years later there were already 300. He gets piglets, veteri­nary services and 60% of his feed from the state-owned company Empresa Porcina, to which he also sells most of his pigs. 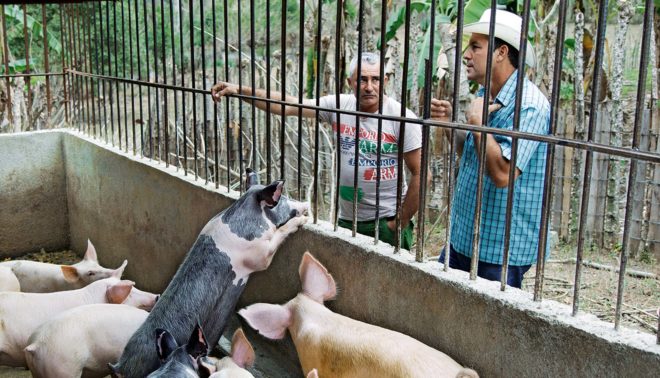 Joel Matienso and Jorge Lorenzo often discuss the future of farming in Cuba.

Mr Matienso sells some of his pigs to private customers, but the majority are deliv­ered to Empresa Porcina. Although the price is a third less than on the private market, he can sell larger quan­ti­ties. For this he has to live with the lack of resources and the short­com­ings of a centrally-controlled system. “Today they wanted to pick up 40 pigs but had no vans avail­able.” So the enter­prising farmer organ­ised one at his own expense so he could close the deal. Delivery prob­lems are also common with feed. “Then I have to buy some­where else and fire this thing up.” He knocks on a home-made corn mill. “We Cubans are inven­tive.”

Picture book Cuba. The car, however, belongs to a visitor; Mr Funes himself drives a Lada.

This inven­tive­ness also applies to Fernando Funes. The road to his Finca Marta farm in the province of Artemisa, east of the capital Havana, runs past large sugar cane fields, aban­doned factory farms and small fields that are ploughed with oxen. On the motorway horses and carts are a common sight along­side old Amer­ican road cruisers. 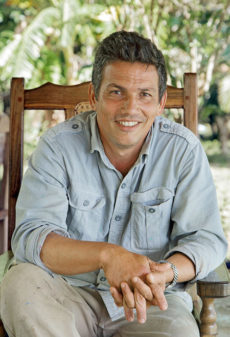 Out of neces­sity, the Caribbean island has becomea testing ground for a postoil future. Many farmers fertilise their soil with worm compost and protect their crops with extracts from the neem tree or tobacco pani­cles.

In this way Mr Funes, who studied agri­cul­tural s ciences at the Univer­sity of Wageningen in the Nether­lands, prac­tices organic agri­cul­ture. However, what is so special about his Finca Marta farm is the concept and marketing. “I have researched into and published papers on organic agri­cul­ture for 20 years, now I want to get some­thing going,” says the 48-year-old. In just four years some­thing amazing has happened on his 8ha. In terrace beds, lollo rosso, asparagus, toma­toes, mustard, carrots and radishes are all growing. Different vari­eties of fruit and vegeta­bles change according to season and climate.

The view from Finca Marta goes far beyond the hilly land­scape all the way to the deep blue sea off the Northern coast of Cuba, where the port and the special devel­op­ment zone Mariel have emerged in recent years. Mr Funes also sells his prod­ucts to tourist restau­rants in Havana. Some­thing like rocket is hardly ever seen in Cuba: For 1kg, he earns the equiv­a­lent of about £4. “With this income I can employ 20 people; and restau­rants can create count­less dishes with it that they sell for good money.” The organic farmer takes a drag on his cigar and smiles. “This way, everyone bene­fits.”

I have researched into and published papers on organic agri­cul­ture for 20 years, now I want to get some­thing going.

He also supplies a national hotel chain and some private house­holds. With the help of his own bee colonies, Mr Funes also produces several tons of quality honey per year, which he mostly exports via a state-owned enter­prise. “There isn’t any other way yet.” And his third pillar is hosting groups of v isitors from Canada, the US or Europe, whom the all-round entre­pre­neur shows around Finca Marta. 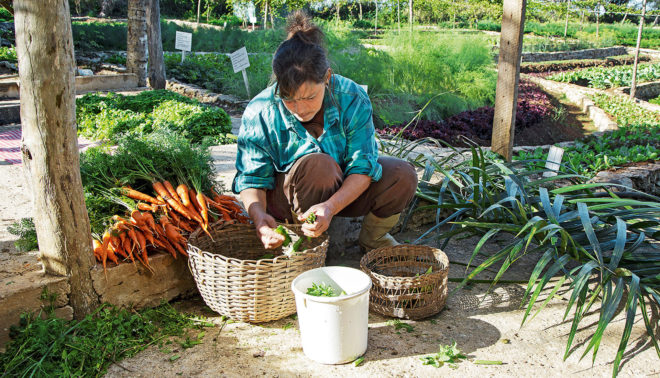 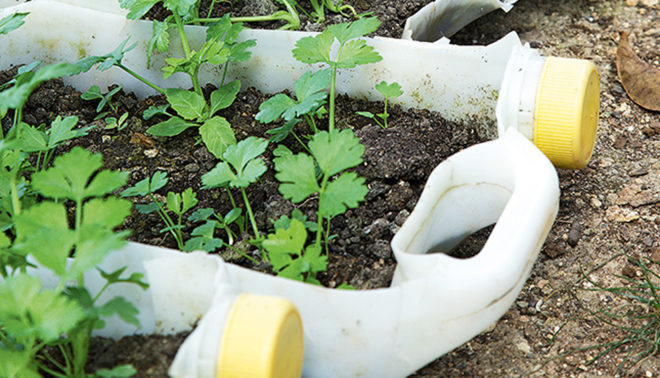 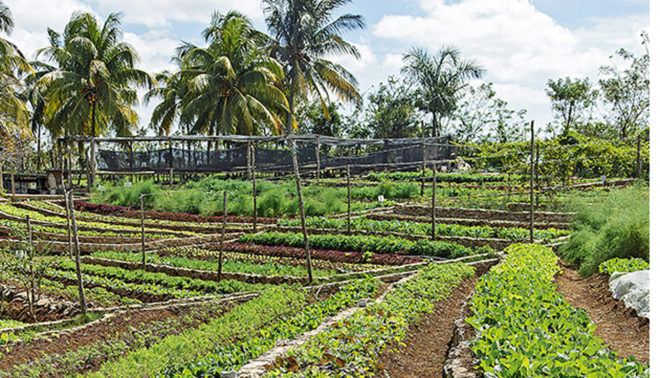 The demand for his prod­ucts is so great that Mr Funes wants to merge his oper­a­tions with some farms in the neigh­bour­hood to create an organic co-oper­a­tive that produces according to his methods. “Local author­i­ties are very recep­tive to the project.”

Private busi­nesses and small co-oper­a­tives generate the majority of food produc­tion in Cuba. Critics believe that the promo­tion of private agri­cul­ture is happening too hesi­tantly. In 2014, state-owned enter­prises held almost one third of agri­cul­tural land, but produced only 10% of the food. The result is that food and animal feed accounts for about 20% of the annual imports into the country. This is despite the fact that each of the 16 provinces has the poten­tial to be self-suffi­cient. The country there­fore needs a lot more – from these new farmers.

The curse of sugar

Shortly after the revo­lu­tion of 1959, Fidel Castro postu­lated that land should belong to those that farm it, not the landowners. The mono­cul­ture of sugar was to end, along with the related depen­dence on the US market. But soon after the country returned to the cultivation of sugar cane. This time it was for its new allies, the Soviet Union and other Eastern Bloc coun­tries. For many years, sugar provided half of Cuba’s gross domestic product. Although the feat proclaimed by Castro in 1969 of 10m tonnes a year was never reached, the country did increase its produc­tion from 4.95m tonnes in 1959 to 7.14m tonnes in 1990. After that it went down­hill. Acreage and yields fell rapidly. The low point was reached in 2011 with a crop of just over 1m tonnes. Since then, produc­tion has risen again slowly and the sugar sector is to be modernised. However, experts doubt whether this is good for Cuban agri­cul­ture.

The author thanks Dr. rer. agr. Harald Hilde­brand (Berlin) for his tech­nical advice.