Grazing manage­ment in the spot­light

Milk producers are under pres­sure from persis­tently low producer prices. At the same time, demand for more natural foods is rising. One solu­tion could be to focus more on grazing manage­ment. But just “opening the cowshed door and let the cows out” is not enough.

Euro­pean dairy producers have been under intense pres­sure in recent years, with low milk prices eroding prof­itability. Many have there­fore been looking to make more of their grass, in a bid to cut produc­tion costs. At the same time, there has been growing public demand for more natural, healthy food, and in some coun­tries proces­sors are paying a premium for grass-fed meat and dairy prod­ucts. However, in many parts of Europe the gradual change away from grazed systems has meant that knowl­edge has been lost; farmers are having to redis­cover how to get the most from pasture.

In the Nether­lands, meadow dairy prod­ucts are in such demand that grazing coaches are helping farmers change to grazing systems. Although grazing is far more wide­spread in the UK, producers are still pushing the bound­aries, with one farmer on Dart­moor mowing his grass before grazing it. Across the Channel in France, the two brothers Jean-François und Michel Conan show that converting to organic has boosted grass­land produc­tivity and resilience to drought. And in Germany – where grazing has become quite unusual- a research centre is helping conven­tional farmers to learn lessons from organic produc­tion. Regard­less of what drives this devel­op­ment, grass, if prop­erly managed, can deliver very high yields and high quality.

Nestled on the western edge of Dart­moor, Brins­abach Farm has been in the Batten family since 1559 – but there’s nothing old-fash­ioned about the way Bill and his son John manage their pasture. Milking 60 cross­bred cows near South Brentor, Devon, they are constantly striving to make the most of their grass­land. “I wanted to repli­cate the quality and yield of spring grass all year round, and thought that cutting it regu­larly might work,” says Bill. For the past eight years he has been mowing the pasture before grazing, and is thrilled with the results. “When grazing, our cows would eat 17kg a day, but with pre-mowing that increased to 23kg. As a result, peak yields from forage increased by 40%, to 35 litres a day.” John cuts the pasture once a day, and strip grazes the paddocks, moving the elec­tric fencing four times a day. “We want to moti­vate the cows to get up and eat again – it’s like going back for dessert.” 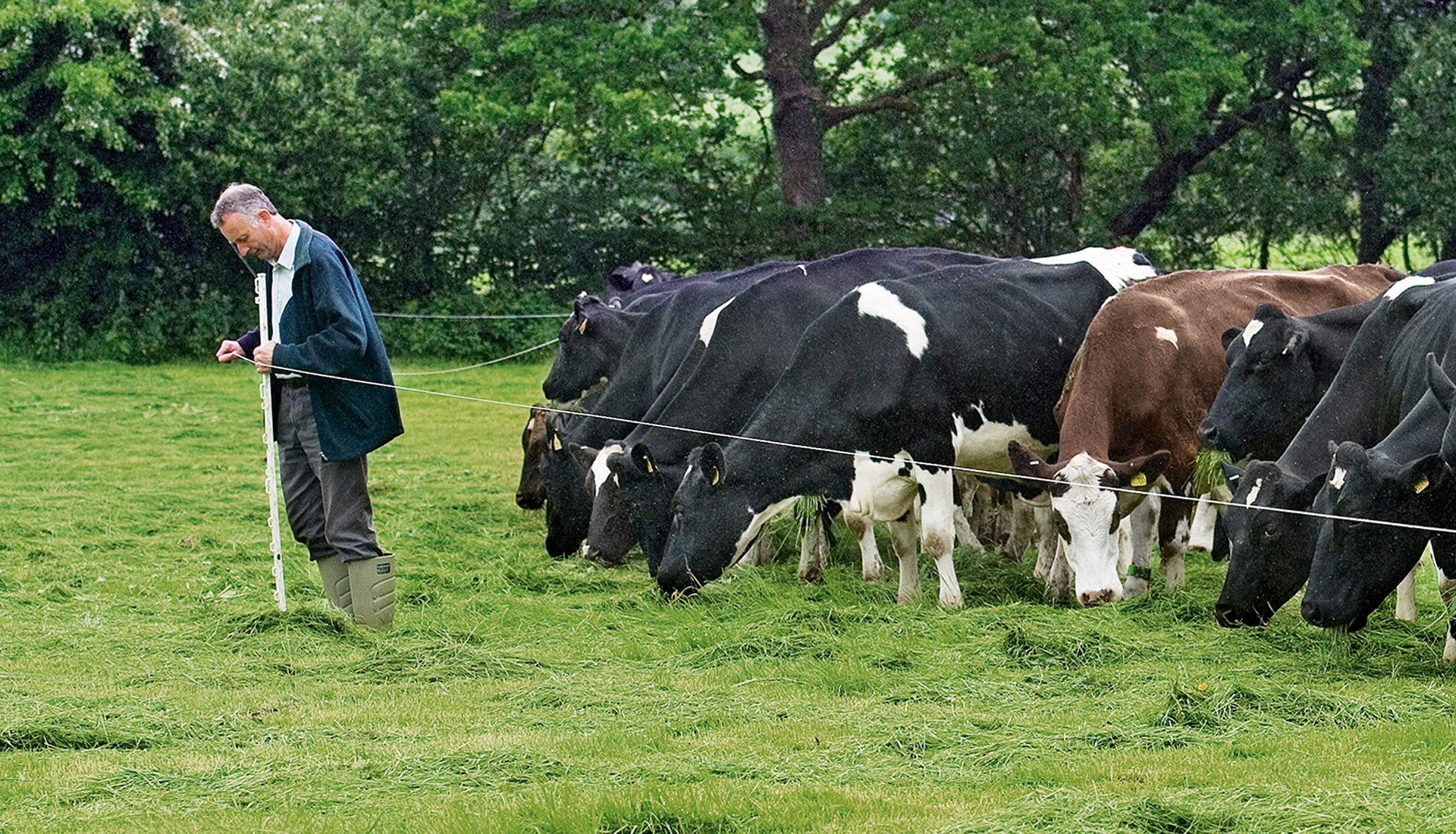 For six years Bill Batten has been feeding his cows freshly mown grass in the field. Their daily milk produc­tion increased by 27%.

Nether­lands: Support from the govern­ment

Even the govern­ment is backing the drive for grass in the Nether­lands, helping more than 800 dairy farmers to adopt grazing systems up until 2018. After a small dent, the number of pasture farmers rose again to 14,000 in 2018, the same level as in 2012. It supports the Stichting Weide­gang (Grazing Foun­da­tion), which was founded to promote grazing and help farmers with specialist meadow coaches. “Much knowl­edge has been lost, both by the farmer and the cow,” says foun­da­tion secre­tary Kees-Jaap Hin. “You cannot just open the cowshed door: Farmers have to learn how to manage their grass and cows have to learn how to graze again.” 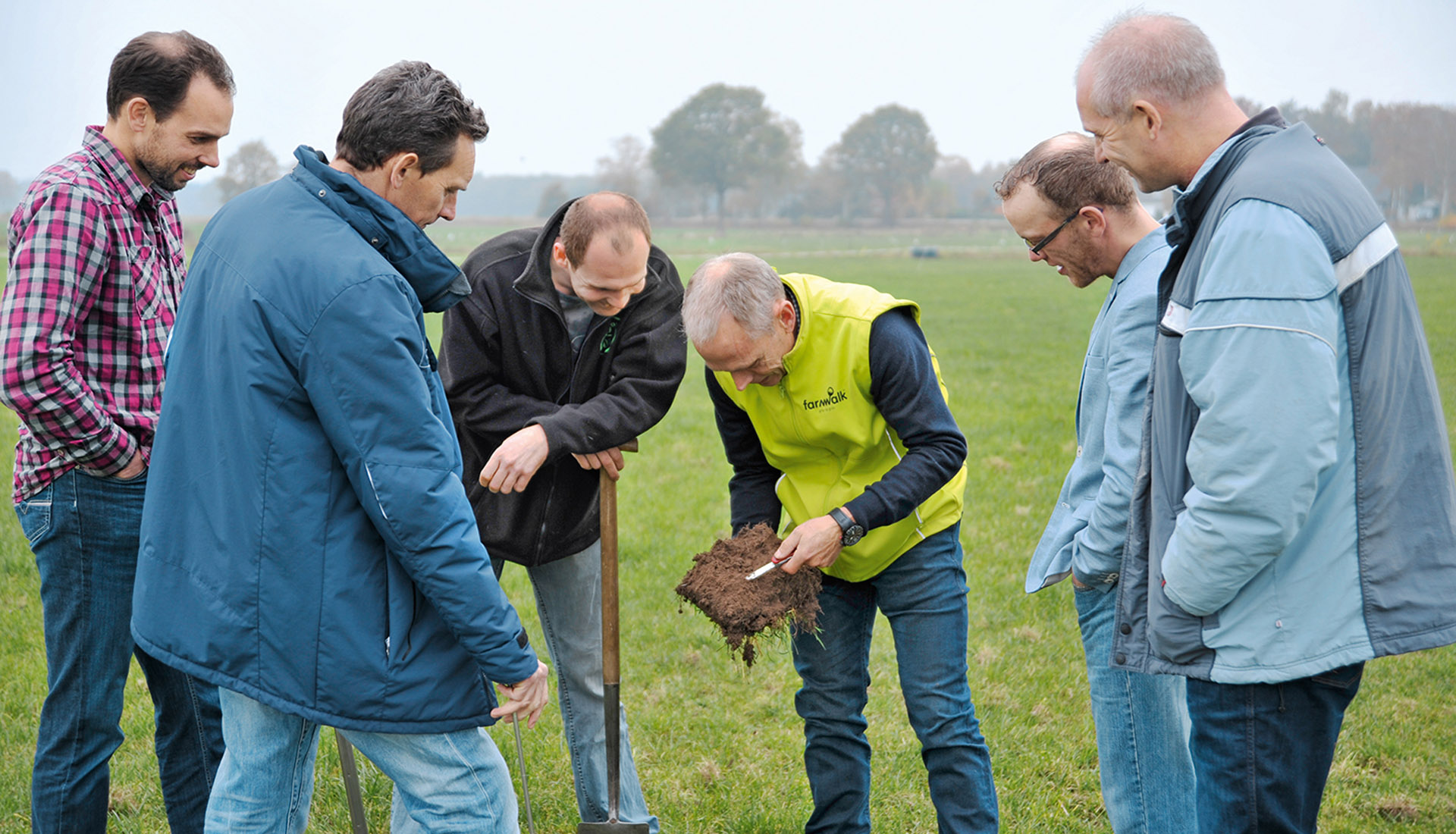 Back to grazing: In the Nether­lands the Stichting Weide­gang supports dairy farmers when converting to meadow milk produc­tion.

With around 70 meadow coaches around the country, farmers pay €375-1500 to get support throughout the grazing season. As well as one-to-one advice and help in drawing up a grazing strategy, they also attend farm walks to learn from other producers. “Every farm is different, so every outdoor grazing strategy must be different,” says meadow coach Henk Antonissen. Another reason for the grazing trend is the 1.5-2c/litre premium paid by some proces­sors for milk produced from cows that graze for at least six hours a day, 120 days a year. Super­mar­kets now ask specif­i­cally for the Weidezuivel (Grass­land Dairy) mark, with meadow dairy prod­ucts becoming the stan­dard on the shelf.

Two years ago, Wilbert Bertens returned to a grazing model at his farm near Breda, having housed his milking cows since 2006 when he intro­duced robotic milkers. Although his 155 Holstein cows had no problem finding the robot after turnout, feed manage­ment was more diffi­cult. “When the cows are inside I know exactly what they are eating,” he says. Initially, Wilbert kept on feeding the cows before turnout in the morning. “But when they went out they spent the whole day lying down chewing the cud,” he explains. That’s why he tried to feed them in the evening, but it was still diffi­cult to find a balance. “I just didn’t know how much they ate during the day: It seems easy on paper, but it’s a different story in prac­tice.”

Last year he decided to bring his cows back to the barn. “Because of the phos­phate regu­la­tion I had to get rid of my young live­stock. So I decided to concen­trate only on milk produc­tion. Having cows inside is the easiest way to do that. When they are outside, you just don’t know how much they eat and you don’t know the quality of the grass. Some­times there’s a lot of grass, some­times it’s dry, some­times it’s wet. Once, when it was very dry, the cows broke through the fence because they wanted to be in the barn. For me that was the moment when I decided to bring them back to the barn. Keeping cows outside is harder than I thought.”

The consumer wants the cows outdoors and it puts the sector in a posi­tive light.

But what about his idea of the grazing model? “It’s better for the consumer and our image to have the cows outside, but I think it’s better for the cows to be inside. That also applies to my yield. The average produc­tion is now around 10,500 l per cow per year instead of the previous 9,300 l. The milk factory’s grazing premium cannot compen­sate for that.”

In Germany, turning cows out to pasture has become quite unusual. However, in 2014, 51.5% of consumers said they wanted milk from grazed cows. There are no more recent surveys. But demand and supply have risen sharply since then. Currently, 100 million litres per year come from the pasture milk industry. The Univer­sity of Kiel has been carrying out research on organic farming since 1994, and its find­ings are just as rele­vant to conven­tional producers. It has found that grass­land farming lowers milk produc­tion costs, improves biodi­ver­sity and lowers dairy farms‘ CO2 foot­prints.

The team is currently working with Irish colleagues to develop a pasture manage­ment system for different land­scape types in Germany. This will be avail­able from 2021 both as an app and as an online program. Based on an appli­ca­tion from Ireland, it will fore­cast the daily grass growth rates of a farm based on data on weather, region, fertil­izer, soil, etc. The system will also be used as an online appli­ca­tion for the devel­op­ment of the new system. The aim is to provide the farmer with a deci­sion-making aid, for example about when the animals are put out to pasture, when they need to be reseeded or silage mown. 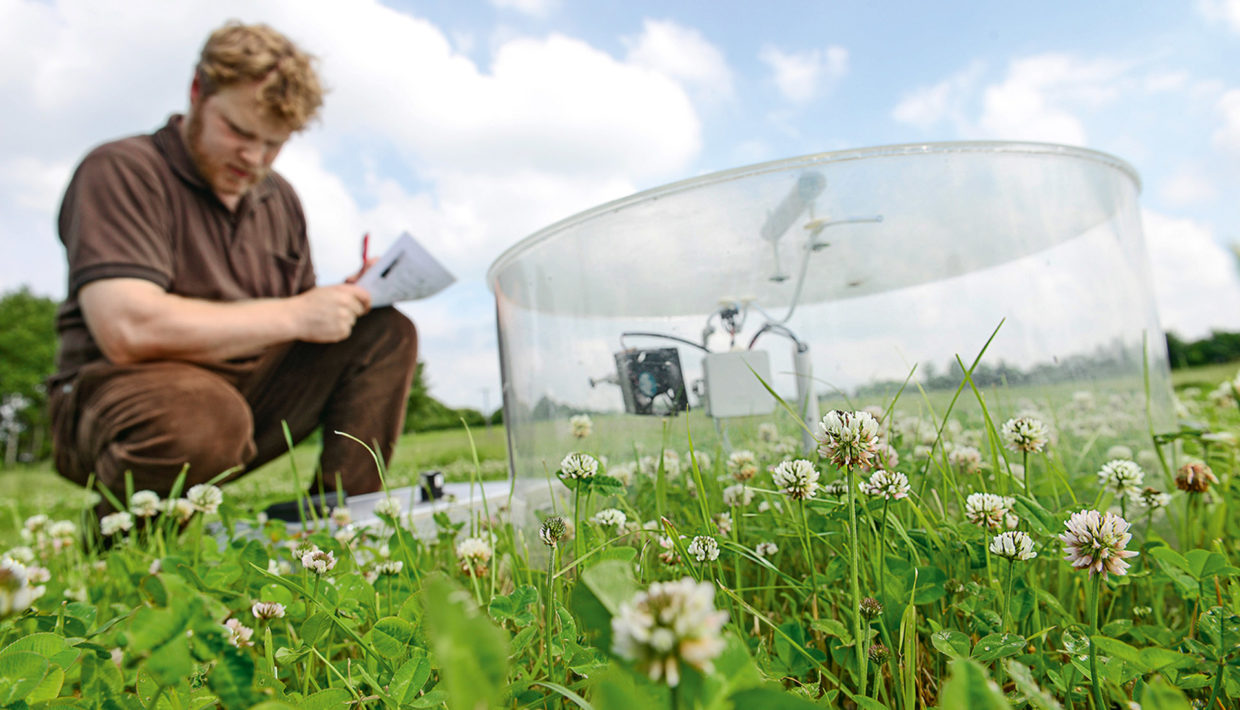 A testing instal­la­tion for climate gas emis­sions on a trial field at “Lindhof”. 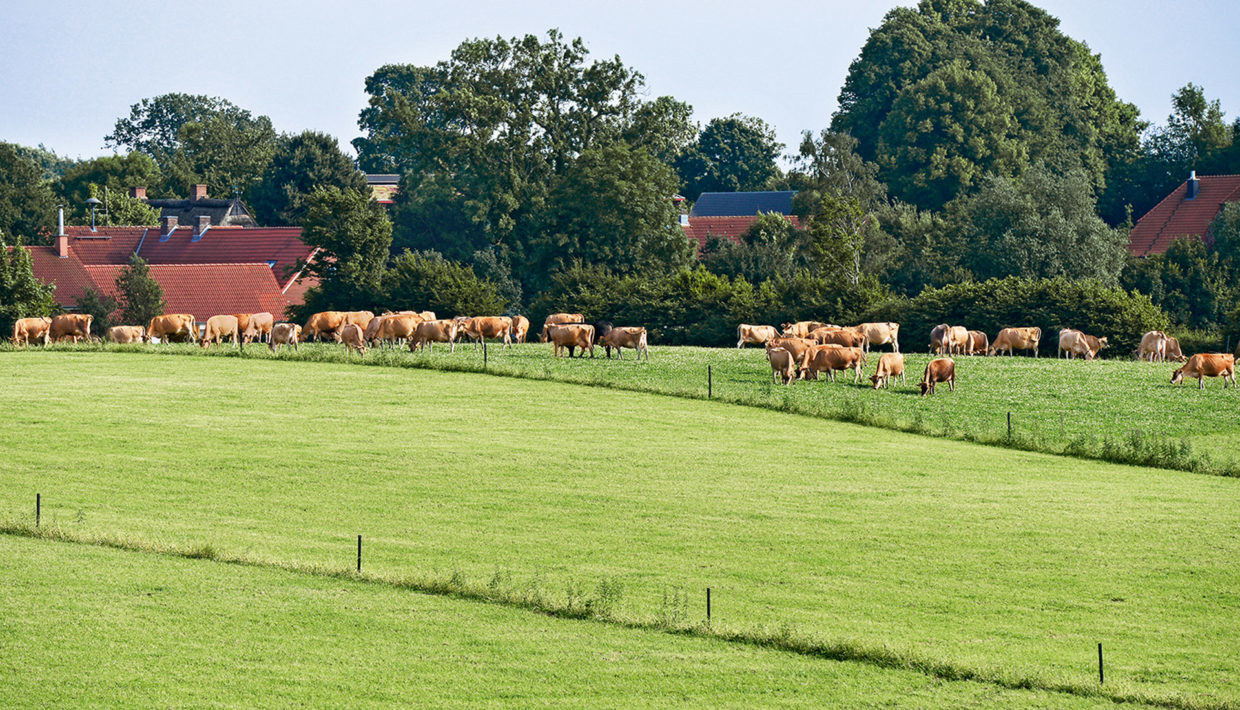 At the Univer­sity of Kiel’s trial farm, “Lindhof”, researchers study the economic and ecolog­ical benefit of grazing systems.

Lindhof – one of the university’s research farms – is studying the economic and ecolog­ical bene­fits of grass­land farming. It has found the best forage mix is high quality grass; to provide energy, with clover supplying the protein.”In the past, farmers used to let the grass grow as high as their boots, but now we only let it grow to about 10cm,” says scien­tific manager Ralf Loges. At this height, the cows can pluck up young grass with a single bite, reducing wastage and improving rumen effi­cien­cies. Research has shown that purchased concen­trates with an energy content of 10MJ cost around 47c, with maize silage of the same quality costing 25c. “With pasture feeding, the price can be signif­i­cantly below 20c.” The project is already producing food for thought. “The aban­don­ment of quotas and the drop in milk price have caused people to rethink things,” Ralf explains. “We see this in the increasing number of visi­tors we have, espe­cially conven­tional farmers.”

About 34% of the LNF is in grass, although the share of maize is increasing slowly as farms get bigger. At the same time, demand for organic milk is increasing. Organic milk produc­tion is expected to increase by 52% by the end of 2019 compared to 2017 produc­tion figures. At Bontul farm in Brit­tany, Jean-François Conan and his brother Michel converted to organic in 2009. As a conven­tional farm, the pasture — sown with peren­nial ryegrass and white clover — was poorly suited to the summer heat and the farm’s light soil. “The ryegrass only grew two months a year,” remem­bers Jean-François. 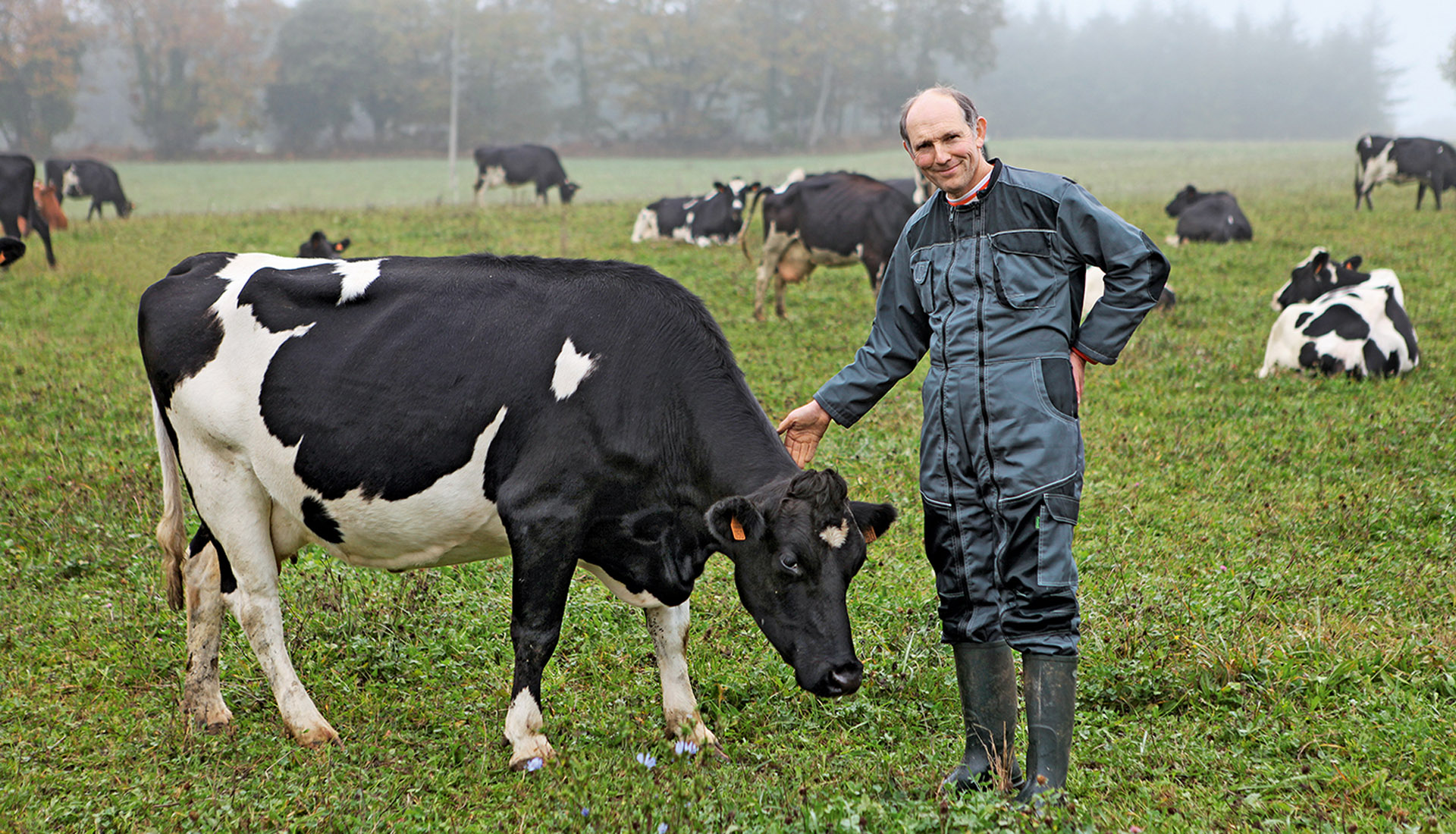 The first step was to plant a variety of plants able to effi­ciently draw nutri­ents and water from the soil. Meadow fescue and dactyl were added to the diploid and tetraploid peren­nial ryegrass, together with a little Timothy, blue­grass and chicory. Yields now average 6-8t DM/ha and Jean-François grazes it inten­sively on a rota­tional basis, leaving the whole herd less than 24 hours on one specific area. Jean-François has also intro­duced a four-way cross­breeding programme, using Holsteins for milk volume and Jerseys for milk quality and docility. Mont­be­liardes compen­sate for the Jersey’s small size, while Norweigian Reds offer high health and mobility.

Fertility is also an essen­tial crite­rion, as to make the most of the grass in spring, the cows must calve within a six-week period. “When making breeding choices, it is impor­tant to consider indi­vidual traits and not just breed perfor­mance.“ Today, all the farm’s economic indi­ca­tors are posi­tive: With milk produc­tion close to 4,600 litres/cow/year income from milk amounts to €180,000, roughly the same as the conven­tional system due to the organic bonus. Produc­tion costs are also markedly lower, with a feed cost of €35/1000 litres against a regional average of €58/1000 litres organic milk.