A passion for soils has seen one farmer achieve net zero without sacri­ficing yields, using tech­niques which could cut input use dras­ti­cally.

Farm manager Tim Parton has utilised biolog­i­cals (bacteria) and grass to enhance soil health and create a carbon sink at Brewood Park Farm, Wolver­hampton. Having always harboured a deep interest in soil, Mr Parton started to expand on his passion as early as the 1990s, but it was in 2009 – when he realised the farm needed to support itself without subsi­dies – that he really began to make changes. 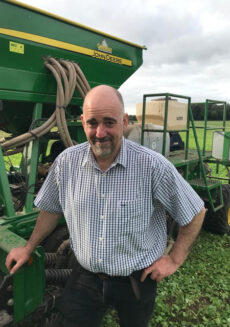 Farmer Tim Parton with his John Deere 750A no till drill.

“I class myself as a biolog­ical farmer,” he explains. “We haven’t used insec­ti­cides for six or seven years, hardly use fungi­cides or seed dress­ings and have cut fertiliser use. It’s about getting the correct nutri­tion for the plants, getting the soil to func­tion and the potas­sium to cycle.”

Having realised farming needed to improve soils to capture more carbon, Mr Parton first started trying to fix nitrogen in 2012 and began to play with strip tilling in 2015 before going to zero till. “As farmers, we cannot continue to use the excuse that there are 8bn people to feed – we can farm just as effi­ciently while regen­er­ating the planet along the way. Demanding more nutri­tion­ally dense food is some­thing everyone is respon­sible for – there is no planet B.”

When he started altering his farming method and looking into adopting biolog­i­cals he had to go and find the infor­ma­tion for himself. “There was no one to ask – espe­cially with biolog­ical farming.”

We haven’t used insec­ti­cides for six or seven years, hardly use fungi­cides or seed dress­ings and have cut fertiliser use.

Despite this, he was able to tap into some knowl­edge close to home on which to base his farming method. “My wife has a degree in neuro­science, and she had looked at why we fill people with drugs when they are ill and if some things could be done with nutri­tion. And plants are the same. I realised that if I could balance the plant nutri­tion right, they wouldn’t get ill – it was a real light­bulb moment. Fungi­cides are just treating the symptom and not the cause,” he explains.

Fungi instead of ploughing

“Soil gives us clean air, clean water and food. The way I farm now we aren’t disturbing the soil. I have the micro­fungi which can release nutri­tion for the plants. But the minute a plough is put through soil, it damages the ecosystem and then the minute there is a heavy down­pour of rain, the soil would run away,” he adds.

“Using your eyes and nose to sense and smell soil you can start to interact with it, under­stand it and know what’s happening within it. I combine using my own sense and science to manage it.” As a result of his changes at the 300ha predom­i­nantly arable farm, the land drains now run crystal clear. “Even in 2019 when we had such a lot of rain, we didn’t get flooding as the water was held where it should be.”

So what does Mr Parton do differ­ently? He grows milling wheat, winter oilseed rape, malting barley and lupins, as well as grass – which is a staple part of the rota­tion, providing haylage which Mr Parton sells to horse owners. “Grass is fantastic for seques­tering carbon and improving the soil.” On a three-year rota­tion, he usually has 49ha in grass, and 4ha of perma­nent pasture.

Another aspect is the use of cover crops. “We like to get cover crops in – the more vari­a­tion above the ground, the more below. All the while, it’s about trying to fix as much carbon as we can in the soil.” He believes farmers should always ask them­selves why they are growing a cover crop. “Are you trying to alle­viate compaction, improve soil health or get the biology ready for the next crop? Then it’s about finding the right plants to do the job.” He uses vetch, beans, rye, oats, radishes, oats, buck­wheat, phacelia, quinoa, sunflowers, kale and white, crimson and berseem clovers.

A key element of the current farming method is the use of biolog­i­cals. “I never knew nitrogen fixing bacteria were a thing before I began using them in 2012. Every­where I applied them I got an extra 1t/ha of wheat and cut back 40kg/ha of nitrogen.”

Biolog­i­cals are natural micro­bial strains from organic matter and micro-organ­isms which can be applied to plants to supple­ment the soil biology, improve nutrient uptake and protect against pests, disease and weeds. They can also help to restore soil health, improve water reten­tion, and assist in main­taining the soil’s micro­bial and carbon levels.

After this, Mr Parton started brewing the biolog­i­cals himself. “This was a simple process but where to apply them was the really tricky thing,” he says. By 2015 he knew he wanted to apply the biolog­i­cals right next to the seeds so he could get symbiosis. “This meant I needed to be able to seed drench right by the seed and there was nothing on the market that could do this.”

To tackle this, he worked closely with a friend to adapt his John Deere 750A drill. Together they came up with a pipe system to apply fertiliser and so he could companion crop. “We added two extra hoppers to the drill so now we can plant two or three crops at the same time in one pass. It was hard but it makes you focus when you know what you want to do. “Since I did that quite a bit of equip­ment has come onto the market and other farmers can get pretty much every­thing I have done ready built,” he says.

Mr Parton can now apply biolog­i­cals for £2.50/ha and has started to make his own compost, which allows for a greater vari­a­tion of microbes – bringing in a lot of different biology to the soil. One lesson learned is that biolog­i­cals are fair weather crea­tures. “They are fickle and don’t like extremes.” This means that they can be inef­fec­tive if applied when it’s too dry or cold.

As the crops develop through the season he takes sap and tissue tests and observes plant growth. From here he knows whether he needs to make a foliar appli­ca­tion of nutri­tion or biolog­i­cals to give the plant any addi­tional support. 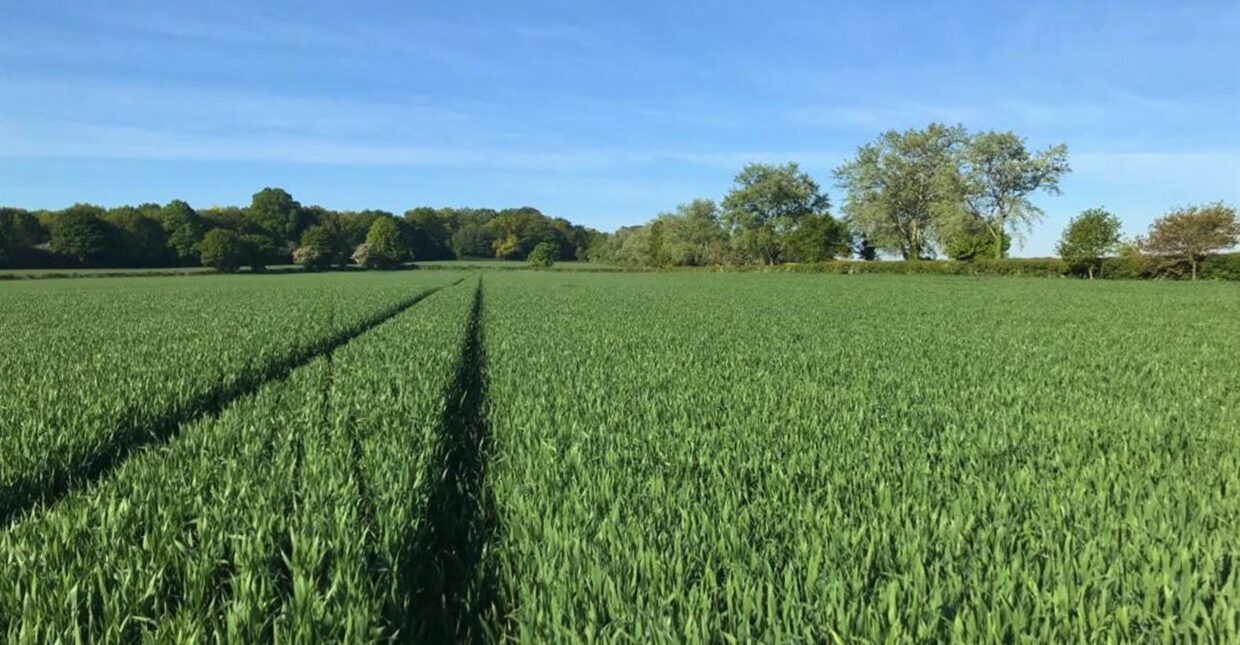 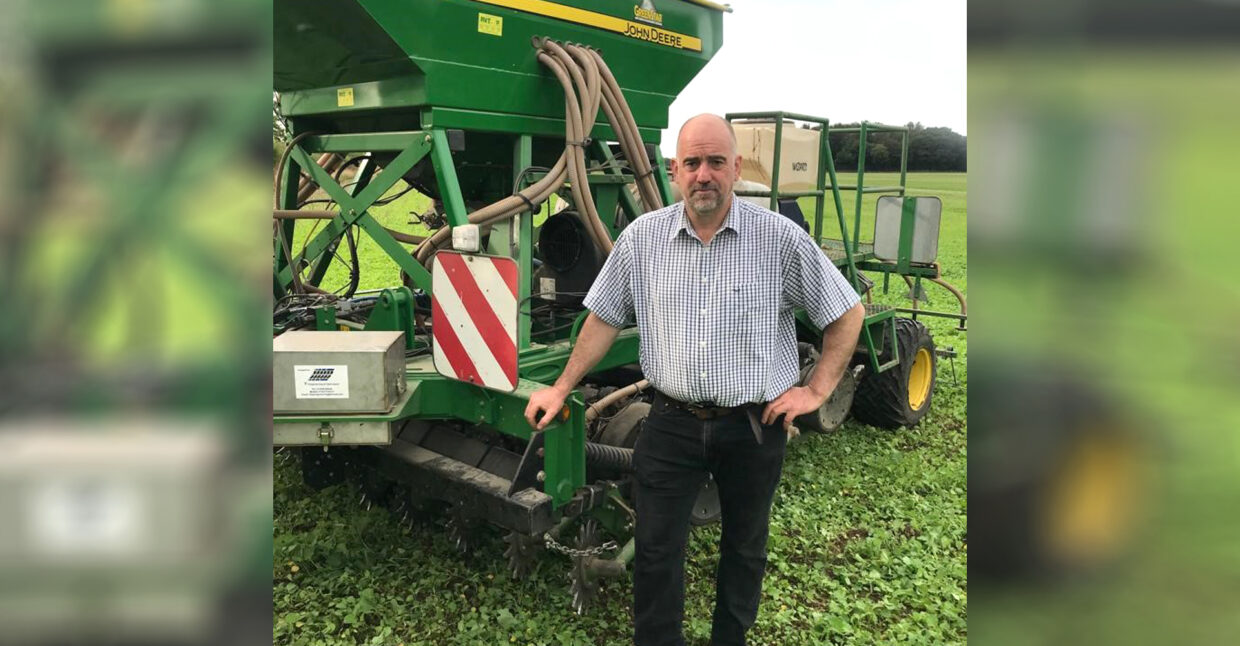 Parton has equipped its 750A seeder with two addi­tional hoppers for sowing mixed crops in one pass.

Though he minimises the use of inor­ganic inputs, he uses fertiliser where and when needed. “I am not a low input farmer; I do it as cheaply as I can but for the maximum yield,” he explains.

And as a result of his tech­niques, yields have remained stable, aver­aging around 9t/ha on the lightest land and 11t/ha on the heav­iest soils. “My soils are now gaining 0.2% organic matter per annum and in doing so are seques­tering a lot of carbon,” says Mr Parton.

When he assessed the farm’s carbon foot­print using the Farm Carbon Toolkit – a tool for farmers to measure, under­stand and act on their green­house gas emis­sions and improve busi­ness resilience – the results said the farm was burning 750t of carbon per year, but was seques­tering 10,000t. “It enables me to have carbon to sell which will be an income going forward.”

We have got to focus on looking after our soils – it’s every farmer’s most valu­able resource.

As a result of changing his farming methods his cost of produc­tion for wheat has fallen from £120/t 10 years ago to £55-£65/t now – and his machinery is lasting longer as it’s not being pushed as hard.

Every change he makes is to improve soil health, increase biodi­ver­sity and capture carbon, while simul­ta­ne­ously producing more nutrient rich, afford­able food in a prof­itable manner. “We have got to focus on looking after our soils – it’s every farmer’s most valu­able resource.”

The next big thing for Mr Parton is for the soil to produce its own nitrogen and to farm without the need for glyphosate. “To help with this I’ve had a crimper roller made. It’s 3m, split into 1m sections, each with a set air pres­sure to give the perfect crimp – so long as the crop is in flower,” he explains.

Although not everyone is as passionate about soils as he is, he feels that envi­ron­mental payments and better rates from banks – like the sustain­able farming bank Oxbury – could provide an incen­tive to go down the regen­er­a­tive farming route. “Prof­itable farming can live along­side a healthy ecosystem.”

As the farm is now beyond net zero, it has carbon to sell. Aware of the scope and poten­tial surrounding carbon credits, Mr Parton is part of a group of farmers which have started the Green Farm Collec­tive. Aimed at both citi­zens and busi­nesses wanting to invest in farms prac­ticing nature and carbon friendly farming, it will allow farmers to sell carbon and biodi­ver­sity credits. “The lower our carbon foot­print, the more income we’ll have.”

Humus loss, erosion, nitrates, pesti­cides in flowing waters and ground­water, as well as the desire for greening and the onset of climate change are giving broad support to inter­crop­ping. We present a portrait of twelve impor­tant types of catch crops. ﻿