Researcher Andrew Leakey is simu­lating atmos­pheric condi­tions for the next half of the century. The data obtained is supposed to miti­gate the conse­quences of climate change.

Sending soybean plants into the future to study their response to climate change. This is the basic idea behind Andrew Leakey’s exper­i­ment. “If you look at the liter­a­ture from the past 30 years, the conclu­sion is almost always the same: The rise in CO2 will improve soybean yields.” The Amer­ican researcher wants to deter­mine whether this is true in prac­tice in a so-called FACE facility. “FACE” stands for Free Air CO2 Enrich­ment. With this method, gas is released from nozzles which react to changes in wind speed and direc­tion. This makes it possible to simu­late atmos­pheric condi­tions likely in 2050 on test plots. 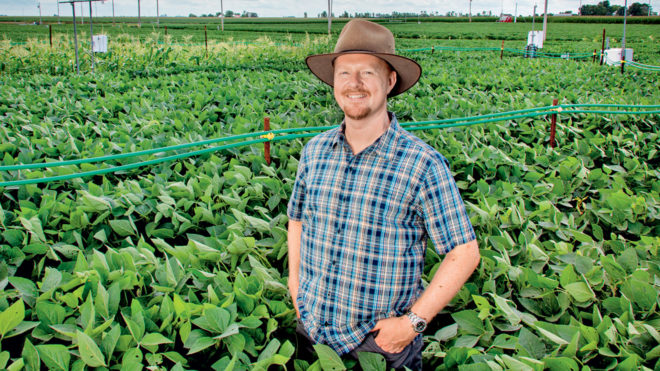 Andrew Leakey is a researcher at the Univer­sity of Illi­nois, USA.

In the first four rainy years of the exper­i­ment, CO2 did actu­ally boost produc­tion. In the following dry year, however, the fertil­i­sa­tion effect became a double-edged sword. “More carbon dioxide in early growth stages, when water is avail­able, means more photo­syn­thesis. When it gets drier later, however, more water is needed because of the larger leaf surface.” And this in turn led to a drop in yields. The find­ings suggest that yield declines in the Amer­ican Midwest could take place early on.

If you look at the liter­a­ture from the past 30 years, the conclu­sion is almost always the same: The rise in CO2 will improve soybean yields.

At the end of 2018, a study summarised the results of the 32 FACE facil­i­ties world­wide. While yields drop the closer you are to the equator, in northern lati­tudes soybeans, maize or wheat could benefit from the rise in CO2. “In some areas of Great Britain, for example, improve­ments in yields are likely to occur.”

However, in regions badly affected by climate change these nega­tive effects may be miti­gated. “On the posi­tive side we  now know the reac­tion mech­a­nisms of soybeans,” says Mr Leakey. The exper­i­ment will continue, since more data is urgently needed. Farmers and agron­o­mists need to better under­stand such mech­a­nisms in order to develop vari­eties or cultivation prac­tices that coun­teract the expected decline in yield. There is a lot at stake for Amer­ican soybean farmers, Mr Leakey recalls: “One third of the world’s supply of soybeans is produced here in the Midwest.”

In 2016, Alexandru Haita started to use John Deere’s web-based farming plat­form MyJohnDeere.com and the asso­ci­ated tool “Oper­a­tions Centre” to manage his farming oper­a­tion. And he has not looked back since.﻿