What would an elec­tric tractor look like if we didn’t have to think about the power supply anymore? Simon Pfaffmann from John Deere’s ETIC invites us to take part in a thought exper­i­ment – and explains how real this idea is.

The elec­tric drive system puts out a great deal of power and is very bene­fi­cial when it comes to automa­tion and autonomi­sa­tion – and it’s avail­able now. It’s ready to use in the field. What would be possible if we also had high-perfor­mance batteries as large as shoe boxes? This is the thought exper­i­ment I invite you to partic­i­pate in. Let’s completely rethink the tractor!/p>

If we can do that, many compo­nents will no longer be neces­sary: The cabin will disap­pear because the vehicle drives itself. Because it is elec­tri­fied, the tractor will no longer need a diesel engine, exhaust system, or fuel tank. If we take it a little bit further and get rid of the wheels, front axle, and main frame, all that is left is the heart of the tractor: Its rear axle. With that, we retain an effi­cient trans­mis­sion that drives the rear axle using elec­tric machines. We also keep the rear hydraulics, the PTO shaft, and the stan­dard­ised imple­ment inter­faces.

Let’s build our new tractor on this basis. Let’s first consider putting the tractor onto cater­pillar tracks. Then we add a reduc­tion gear and two elec­tric motors to the design, and the mechan­ical portion of the drive train is done. While the speed of the diesel engine and hydraulic pumps is always inter­de­pen­dent with classic trac­tors, we will sepa­rate the two systems in our tractor in order to make the drive train even more effi­cient. This means that one of the engines is purely respon­sible for the trac­tion drive, and the other is respon­sible for the rear PTO and the hydraulics system. Each of these machines puts out 250kw of power. This makes the perfor­mance of our tractor compa­rable to trac­tors from the 7000 or 8000 series. In this compact space, this is only possible because the elec­trical compo­nents are so compact and powerful, allowing us to stop worrying about the power supply. How is this supposed to work? We will get to that in a moment, be patient for a little longer!

How to get power to the ground

Our tractor has a John Deere inverter to supply power and control the elec­tric machines. A second inverter enables us to offboard power to an imple­ment. The next step is to then clad the drive train. Under­neath the chassis, there is a new brake system, various cooling circuits for the elec­trical compo­nents – among other things, as well as control compo­nents. 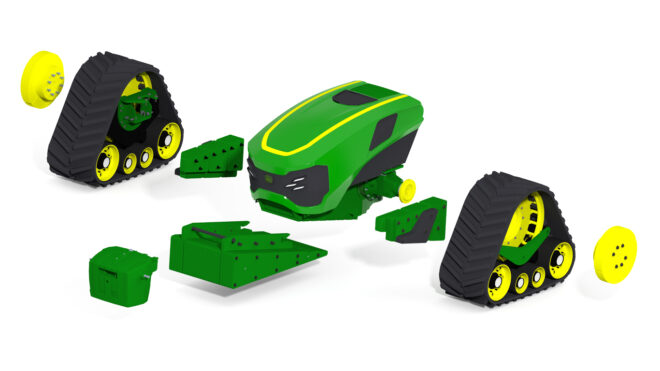 The ballast system is used to to make the tractor lighter or heavier depending on the job.

We can attach different weights so that the tractor drives its power into the ground. For this, we have devel­oped a ballast system for both the basic vehicle as well as the track. This allows us to decide if we want to make the vehicle heavy or if we need a lighter machine, depending on what the focus is: Heavy tillage or lighter tasks.

Without a front axle, the wheeled version of the tractor might tip over. To prevent this, the tractor forms a symbi­otic rela­tion­ship with the imple­ment when balancing. Here, the addi­tional axis is used as a second axle for the tractor.

This creates a form of artic­u­lated steering. Conven­tional machines can be used as imple­ments; only the inter­face needs to be adapted.So far so good. Now there is just the ques­tion of where the power for the tractor comes from? After all, the assump­tion we made at the begin­ning of this article about a battery the size of a shoe box is still a long way off. 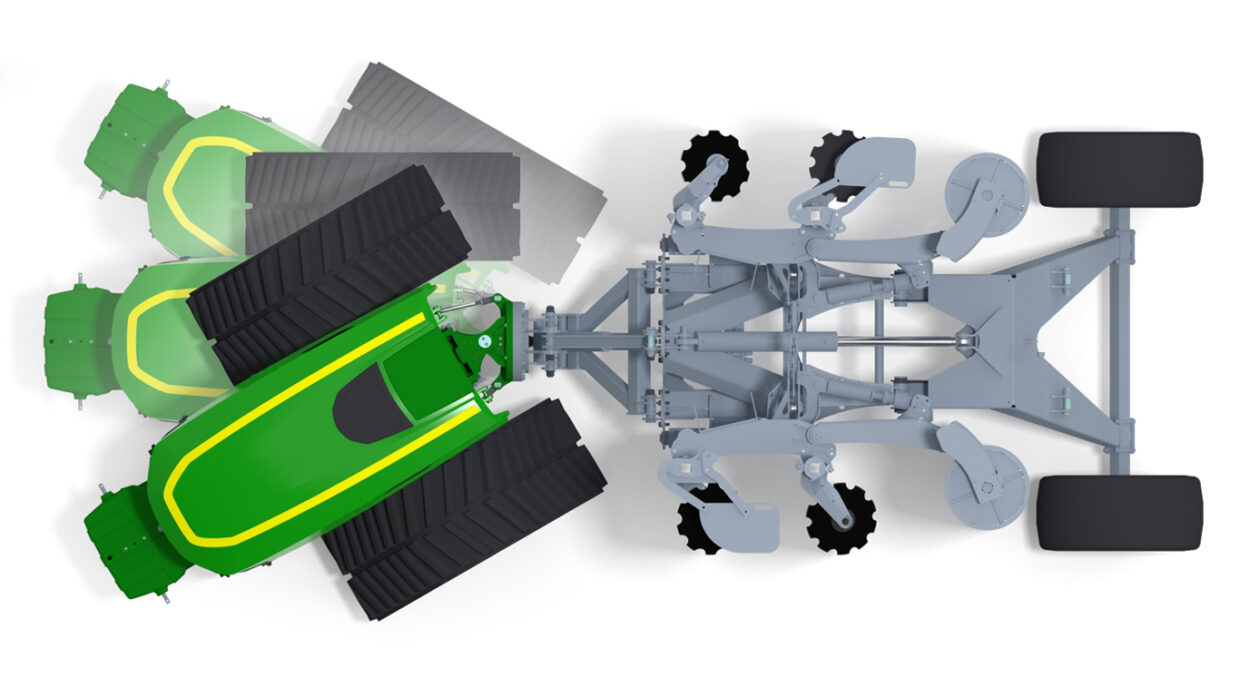 Tractor and imple­ment form a symbi­otic rela­tion­ship and can be controlled according to the prin­ciple of artic­u­lated steering.

Power from the edge of the field

The solu­tion for our proto­types is a power distri­b­u­tion vehicle based on the model of our GridCon tractor It is powered from the edge of the field using a cable. The power is then distrib­uted to the autonomous trac­tors from this vehicle using a cable. Trac­tors, as in plural? Exactly! Because this concept works very well when the tractor works in a swarm with other units.

This means that the power is used effi­ciently over a larger area once it is brought to the field. Thanks to advances in steering and autonomous driving, there are also no prob­lems with turning or driving on the field. And, in our vision, there is always a person standing at the edge of the field super­vising what is going on.

Our swarm tractor is certainly not a tech­nology that will go into series produc­tion within the next few years. That’s because there are still a few hurdles to clear, for example in the areas of infra­struc­ture, farm layouts, energy provider billing models, and laws and regu­la­tions. 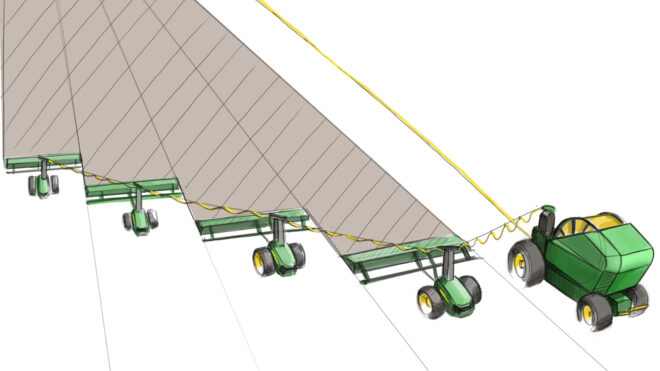 A power distri­b­u­tion vehicle supplies power to a tractor swarm with a cable.

Still, the project is very valu­able to us. After all, the cable tech­nology enables us to test elec­tric vehi­cles in the field over long periods without being slowed down by a dead battery. With these vehi­cles, we can theo­ret­i­cally work 24 hours a day in the field, gaining insight the entire time. It is aston­ishing to see the ideas that come to you when watching from the edge of the field as a swarm unit drives over it.