Precision Farming“The goal is to treat every indi­vidual plant!”

Digi­tal­i­sa­tion is crucial for agri­cul­ture and its sustain­ability ambi­tions, according to Stefan Stahlmecke, regional director of intel­li­gent solu­tions at John Deere, speaking at the Digital Farming Confer­ence in Berlin. But what does this mean for farmers? We ques­tioned him to find out more.

What chal­lenges does agri­cul­ture face glob­ally?

World popu­la­tion is esti­mated to reach 10 billion people by 2050 which will lead to a 50% increase in demand for food. More animal prod­ucts will be needed in the future and up to 70% more plant-based food will have to be produced – on the same or perhaps even less land. In Germany alone, the equiv­a­lent of 73 foot­ball fields of agri­cul­tural land is lost every day.

This increased produc­tion has to be managed with fewer workers because qual­i­fied personnel are in short supply. A farm with 2,500 ha, which is not uncommon in the USA, South America, and Eastern Europe, culti­vates up to 100 million tonnes of crops which create signif­i­cant labour demands. 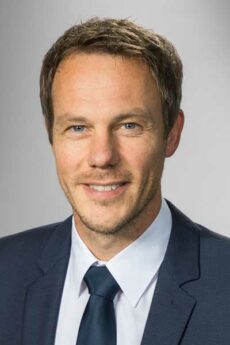 What does this mean for farmers today?

Farmers are culti­vating larger areas, but it still comes down to each indi­vidual plant. Providing it with the right amount of nutri­ents, keeping it free of fungi and insects, and ulti­mately harvesting it safely.

And it can feel like a race against time. During planting or sowing, the farmer has about 10 days to put the seeds into the ground and missing this window will have a nega­tive impact on the yield. During the growth phase, weeds can grow up to 10cm per day leaving farmers with little time to apply crop protec­tion and prevent the weeds from taking nutri­ents away from the crop. Farmers spend around 60-70% of a crop’s produc­tion cost on seeds, fertiliser, and crop protec­tion chem­i­cals.

In short, this means a signif­i­cant number of impactful deci­sions must be made throughout the season. So how can farmers achieve the goal of increasing produc­tion and the quality of food while reducing arti­fi­cial inputs like fertiliser and pesti­cides? 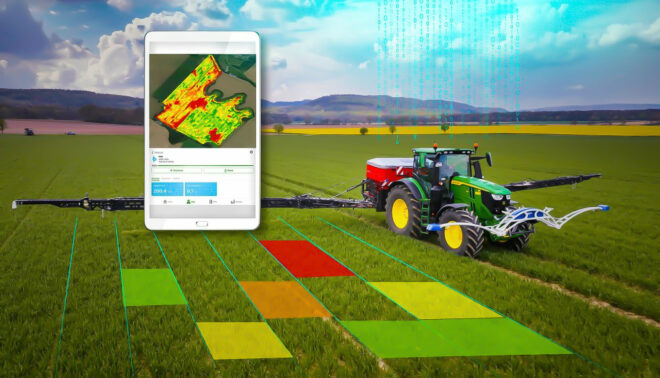 The goal of modern agri­cul­ture – agri­cul­ture 4.0, the fourth agri­cul­tural revo­lu­tion – is to respond to the needs of each indi­vidual plant to opti­mise crop inputs and outputs. But the reality is that, on some farms, crops are treated as fields and viewed as homo­ge­neous units – sown, fertilised, sprayed and harvested in a uniform manner.

However, our sector is working hard to change this prac­tice and preci­sion farming methods have been imple­mented on many farms.

What is the next step towards an Agri­cul­ture 4.0?

Site-specific cultivation of fields is more precise than tradi­tional methods and better responds to the needs of the crop – but it’s still a long way from indi­vidual crop treat­ment. Higher preci­sion methods, enabled by digi­tal­i­sa­tion, can achieve the goal of treating crops on an indi­vidual plant basis and help farmers to maximise produc­tion while becoming more sustain­able.

The picture demon­strates the zone concept, a high preci­sion method, and shows a tractor with a sensor attached to the front and a mineral fertiliser spreader at the rear. The sensor, equipped with a multi­spec­tral camera, measures the chloro­phyll content of the crops and esti­mates the amount of biomass. This is then trans­lated into a nutrient require­ment and the amount of fertiliser being spread can be adjusted according to the needs of the crops in the zone.

And appli­ca­tion rates can be deter­mined even more precisely if, for example, histor­ical biomass maps, recorded by satel­lites, are used to compare histor­ical and the real-time status of the indi­vidual zones. 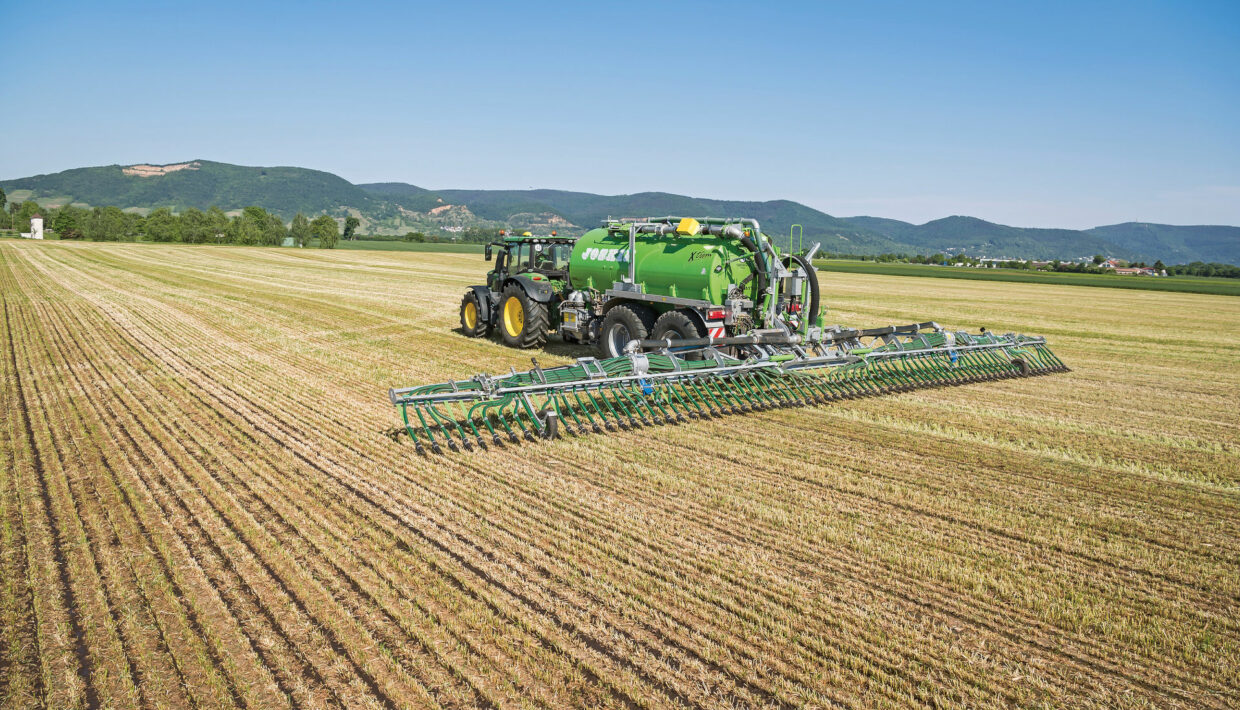 With the help of NIR tech­nology, liquid manure can be applied almost as accu­rately as mineral fertiliser.

What role does the sensor tech­nology play in this?

In another example of zone fertil­i­sa­tion, the mineral fertiliser spreader is replaced by a slurry tanker. Near-infrared (NIR) tech­nology can be used to measure ingre­di­ents such as nitrogen, phos­phorus and carbon dioxide (CO₂), allowing liquid manures like slurry to be used almost as precisely and specif­i­cally as mineral fertiliser. Another advan­tage is that it cuts down on CO2 emis­sions.

With all the high-tech, is there still room for mechan­ical weed control?

Yes, and rows can be treated indi­vid­u­ally. Weeds can be mechan­i­cally managed with a hoe, which is guided precisely between the rows by using a camera and a double-acting cylinder on the tractor’s draft link. The system makes it possible to move between rows quickly and achieve a similar level of produc­tivity as when spraying.

However, hoeing the soil will still produce a level of carbon emis­sion and demon­strates how finding the perfect solu­tion is not always easy. 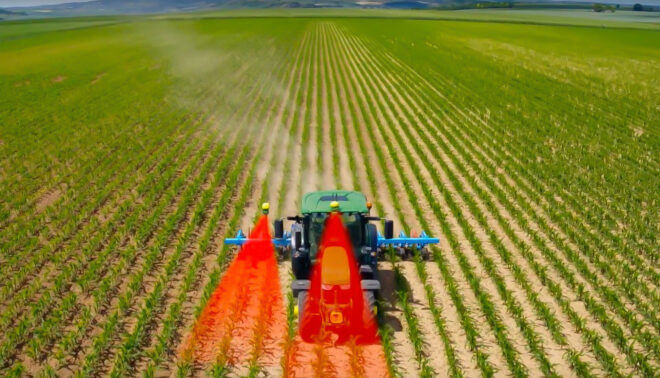 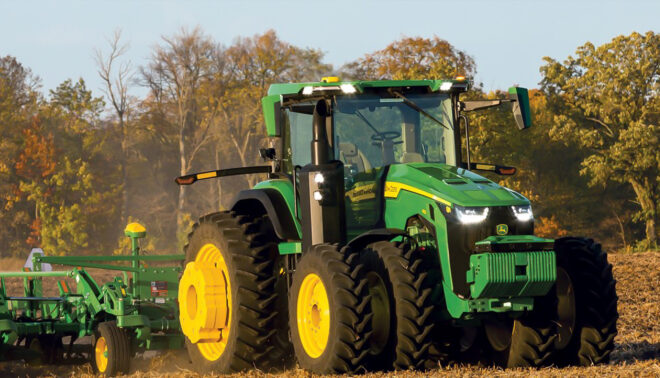 The first sensor-controlled fully autonomous trac­tors are now being used in the USA.

Let’s take a look into the future. What is possible?

One example is a self-propelled sprayer fitted with 36 cameras that can take pictures of indi­vidual plants and iden­tify them as a weed or a crop plant. This is achieved by a compar­ison of real-time images to a bank of images within the technology’s soft­ware. Plants iden­ti­fied as weeds can then be target sprayed by indi­vidual nozzles, avoiding spraying the crop. A system like this can reduce herbi­cide use by up to 90%.

And how will machinery be oper­ated in the future – will the farmer aspect be replaced?

There are already fully autonomous trac­tors equipped with six special cameras that recog­nise the envi­ron­ment and accord­ingly till the field without anyone in the cab seat. These machines are equipped with a lot of tech­nology and sensors.

But trust is impor­tant; our industry has to earn it and that doesn’t happen overnight, but trust is the essen­tial prereq­ui­site for autonomous systems. It doesn’t mean farmers will no longer have field tasks in the future, but instead they’ll be able to devote them­selves to other tasks, and we can help them make deci­sions with greater certainty.

Digi­ti­sa­tion creates new oppor­tu­ni­ties for farmer and contractor Rainer Eich­horn, supporting his work in the fields. Since last summer, he has been using the John Deere Oper­a­tions Centre, organ­ising field­work across 1,100ha of land better than ever before.﻿