Tractors“Of course, a heavy tractor can be gentle on the soil”

Heavy does not always mean high pres­sure on the ground. Simon Schowalter, product marketing manager of large trac­tors at John Deere, explains why this is the case and how the 8RX tracked tractor makes use of it.

Mr Schowalter, can large and heavy trac­tors protect the soil?

Yes of course, it’s not a paradox. The 8RX, which weighs 20t, and I, weighing around 85kg, have some­thing in common: The exact same contact surface pres­sure. That means: The machine exerts the same pres­sure measured in kg per square centimetre on the ground as I do, simply because the tractor has a dispro­por­tion­ately large contact area.

This is the theory. Is this also confirmed in prac­tice?

We presented the RX8 as a specialist in soil protec­tion 18 months ago at the last Agritech­nica. We have used these past one and a half years very inten­sively to back up this claim with the help of data from the field and inde­pen­dent experts. We tested 8R trac­tors in different config­u­ra­tions on a wide variety of soils in various coun­tries and conducted many soil pres­sure measure­ments. One of the most inter­esting results we found was when measuring the pene­tra­tion resis­tance into the soil, which can be used to deter­mine whether the soil is loose or compacted. The result: In the tracks of the 8RX, the water could seep away more than three times faster compared to an 8R with single tyres.

This means: Less soil erosion and leaching of nutri­ents from surface run-off as well as better infil­tra­tion, even in periods of drought, and thus a better water and nutrient supply for the plants. All of this leads to more yield, more biomass, and more CO2 seques­tra­tion. This is not only good for the envi­ron­ment, but also for the farmer’s wallet. If we get 3% more yield in tradi­tional wheat, this results in an addi­tional profit of over €50/ha (£43/ha) for the farmer. 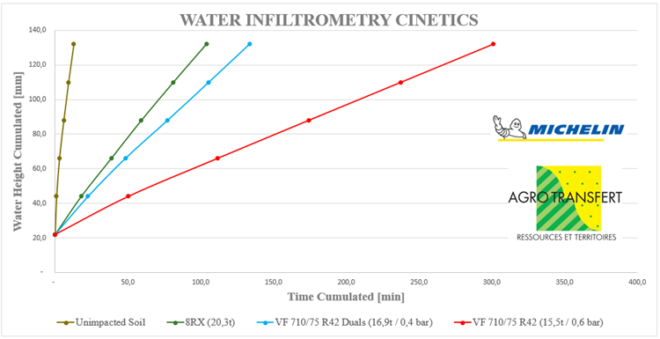 The dual tyres also performed well in the tests. Are they a good alter­na­tive?

That’s correct. Dual tyres are a good solu­tion. In America, this is no problem at all. There are wide roads, much less traffic and only lax traffic regu­la­tions. In much of Europe, it’s a different story. You can’t just drive through the village streets with parts sticking out that are over four metres wide – you’re just not allowed to do that.

In the mean­time, there are also new tyre concepts, for example using lower tyre pres­sures, which enables a larger contact area. Are modern single wheel tires an alter­na­tive?

Modern VF tyres and espe­cially tyre pres­sure adjust­ment systems are defi­nitely a valu­able contri­bu­tion. This is great for machines which constantly switch between road and field. However, with the load capacity of the tyres, there are limits. These machines do not come close to the level of a dual-tyred machine and the 8RX. Our measure­ments clearly show this, as do the track depths in the field.

Tires cause a signif­i­cantly larger wedge of soil that the tractor pushes in front of it. This increases the rolling resis­tance.

Does the track depth have a signif­i­cant effect in prac­tice?

Absolutely! The deeper the tractor sinks, the more ground is “pushed” in front of the tyre or must be crossed. This leads to higher rolling/traction resis­tance, which in turn increases fuel usage. This is different with the flat tracks of the crawler gears, where fuel savings of over 20% can be achieved.

Well, we have already seen it in some demos and the measure­ment data from Michelin also testi­fies to that. We got very similar results on three different soils. The higher the trac­tion force the greater the benefit. Four instead of five litres per hectare – that’s the state­ment. The 20% fuel savings have been achieved here at a trac­tion force of 7,000 daN. The machines do not always operate under maximum load, but these trac­tors mainly do the heavy tillage, where full trac­tion is required. 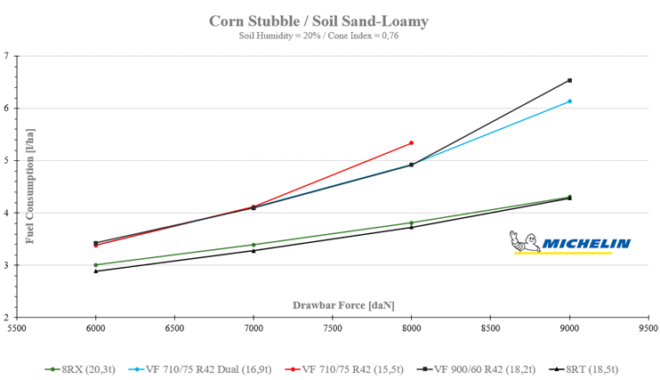 Is the good result only achieved on flat areas?

No, not just on flat areas. A large part of this saving is also due to the rarely occur­ring slip­page. Tractor wheels typi­cally mesh with the ground with 12-16 lugs: the 8RX with 44. As a result, wheeled trac­tors typi­cally have slip­page values of 8-12% – in prac­tice, often beyond 15%. Tracked trac­tors have typi­cally 1-3% slip­page values. That’s a 10% increase in produc­tivity.

In addi­tion to prof­itability, sustain­ability is playing an increas­ingly impor­tant role. How is the effi­ciency reflected in CO2 equiv­a­lents?

That can be calcu­lated quite easily. Depending on the capacity util­i­sa­tion of the machine and the number of hours it is used in the year, savings of around 20t per machine and year can be esti­mated.

Soil compaction can reduce yields by up to 20%. Mathias Stet­tler and Roger Stirn­i­mann from the Univer­sity of Applied Sciences for Agri­cul­ture, Forestry and Food Economics explain what happens during this process and how it can be miti­gated.﻿