A dream team in Provence

Lavender and einkorn wheat are a dream team. This pairing makes the farmers of Provence happy, as well as their customers all over the world.

French Provence is at its most beau­tiful in summer when the lavender flowers. The moun­tain village of Simiane-la-Rotonde, north­east of Apt, in the Luberon region is known as an impor­tant center of lavender-growing. 70% of all of the essen­tial lavender oil made in France finds its way through the village. Nicolas Landel is convinced that “the best lavender in France grows here”. He is farm manager at Young Living and over­sees the French side of the US company special­ising in essen­tial oils.

In Provence there are 50 farmers growing lavender on around 2,500ha, as well as, on a smaller scale, other herbs such as hyssop, rose­mary or clary sage for the company. The farms are located within a radius of 150km from Simiane-la-Rotonde.

This coop­er­a­tion began 28 years ago. The Amer­ican farmer Gary Young visited Provence and a friend­ship began between him and Nicolas’ father, Jean-Noël Landel. “My father had a distillery and contact with the farmers. They were initially skep­tical about working with the Amer­ican.” Then the sales markets began to weaken, but Young continued to pay good prices to the farmers for good quality lavender. “This laid the foun­da­tion for what is still a good working rela­tion­ship today,” explains Mr Landel. 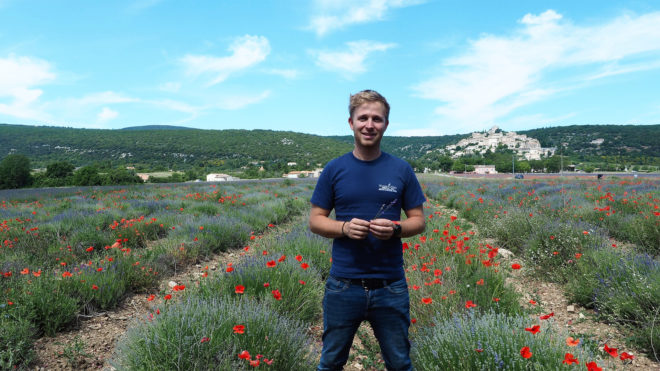 Nicolas Landel is convinced that “the best lavender in France grows here”.

Philippe Gail­lard (25) is one of these lavender farmers. With his 60-year-old father he runs the farm “Les Maure­lieres”, a few kilo­me­tres outside Simiane-la-Rotonde. The farm has an area of 125ha, 100ha of which are currently used to grow lavender. In the next three years another 50ha will be added, of which the first 25ha will be planted in 2020. An “ideal area for growing lavender,” says Mr Gail­lard, describing the coun­try­side he calls home.

We live here in an ideal area for growing lavender

Lavender likes it to be sunny and dry and grows at alti­tudes between 600 and 1,400m, and best between 1,000 and 1,200m. “Les Maure­lieres” is situ­ated at 850m and the Luberon region has always been a tradi­tional lavender-growing area. Lavender has also been part of the Gail­lards’ agenda for several gener­a­tions. “That’s prob­ably a good 200 years old,” Mr Gail­lard says, pointing to an old stone wall on his farm. Their trac­tors stand right next to it. The cultivation of lavender used to be a lot of manual work, but today it is mech­a­nised.

In organic cultivation, as with Philippe Gail­lard, the lavender is culti­vated in rota­tion with einkorn wheat. Lavender grows in the field for 10 years, with the sole addi­tion of organic fertiliser. In the first year it does not yet produce any yield, but produces 60% from the second year, and from the third year the plant reaches its full size. After the 10th year the root­stocks are removed and einkorn wheat crops, or, in the case of the Gail­lards, clary sage or hyssop as well, follow for three to four years. 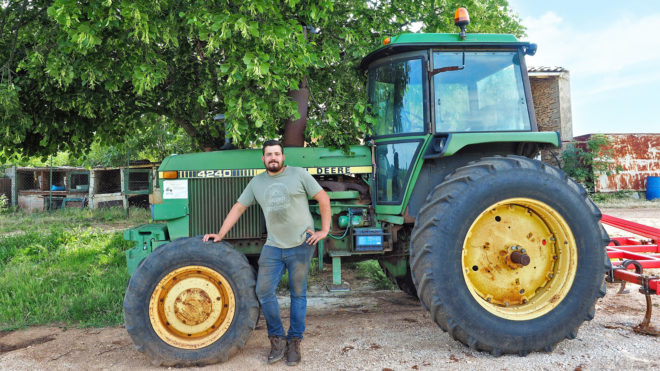 This John Deere 4240 has been at work for 40 years. “Without it, we wouldn’t be where we are today,” says Mr Gail­lard. There are three more trac­tors from John Deere on the farm, the most recent one a 6125B.

Some farmers drive their sheep out to the fields to eat the weeds. They don’t like the smell of lavender, so they leave it be. Philippe Gail­lard, however, fights weeds mechan­i­cally.

Until 40 years ago, the Gail­lards had their own distillery for the extrac­tion of essen­tial oils on the farm. Nowa­days it is often more effi­cient to share the work. The farmers work in coop­er­a­tives. Some need trac­tors or machines, others, like Gail­lard, give their harvest to distil­leries. One of them is not far from Simiane-la-Rotonde.

Benoît Cassan manages this distillery. He is in his early 40s and a farmer himself and is already a fourth-gener­a­tion lavender-grower. His farm has an area of 200ha. Already at the age of eight Benoît Cassan was in the field with his father and grand­fa­ther, cutting bouquets by hand. When Gary Young came to France looking for farmers to help him, the Cassans were there from the start. Mr Cassan says he has gained a lot from the coop­er­a­tion over the years. “Most of all, I’ve learned to appre­ciate my work.”

Over five weeks each summer a total of 300 people from all over the world get to expe­ri­ence this appre­ci­a­tion: they take part in a programme that goes by the motto “From Seed to Label”. They get to know the land­scape and farmers, visit Benoît Cassan’s distillery, and a grain mill, learn more in lectures and help in the fields. There they learn how to cut bouquets with a special sickle, just like in the old days, or how to weed. Today the lavender is harvested by machine. It is done using a tractor with a special mower deck that runs along­side and leads to a very deep tipper. The group also gets to see this in action.

In the field next to the lavender there is a very short grain with thick ears: einkorn. Petit Épeautre, small spelt grain, as it’s called in the vernac­ular. It was once the most impor­tant cereal on the barren Provencal soil. Einkorn tradi­tion­ally follows lavender in crop rota­tion. Thanks to organic cultivation, this old type of grain has never completely disap­peared. 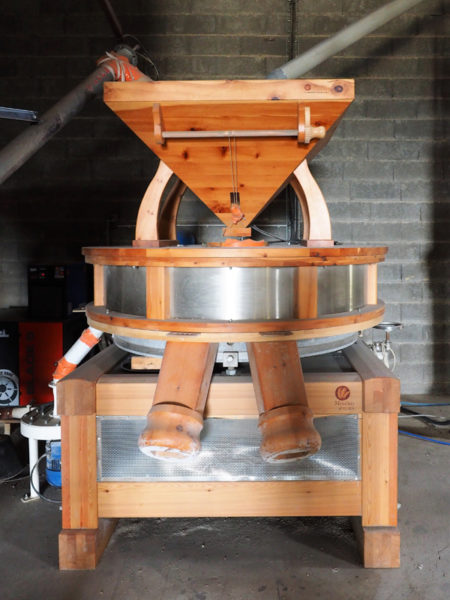 With its low gluten content einkorn is not very suit­able for making bread. However, it has a very good nutrient spec­trum, for instance with amino acids.

Einkorn does not need fertiliser or plant protec­tion measures even in these unfavourable habi­tats and is also good for soil quality. In the past, growing einkorn was thus often an economic way of improving soil fertility. Due to the long growth phase – einkorn is sown in September and harvested in August of the following year – the grain forms very long roots. So it is very robust and can handle dry periods and freak weather well.

The number of farmers putting einkorn back into crop rota­tion is increasing. In 2019, for example, €200,000 (about £170,800) were invested in two new grain silos with a capacity of 600t each. They stand in the farm­yard of Jerome Reynard (42) in Sault, only 15 minutes from Simiane-la-Rotonde. The farmer himself culti­vates 300ha, of which 100ha are intended for lavender, einkorn and clary sage, with other grains grown on the rest of the acreage. He oper­ates two grain mills and various plants for rinsing, cleaning, sieving, shelling and sorting the einkorn. “We feed the bran, which is produced during grinding, to the pigs,” explains Reynard during the tour of the farm. The pods – a by-product of shelling – are mixed with lavender flowers to fill pillows and sold all over the world.

Gael Boeglin, who is respon­sible for the tech­nical main­te­nance of the systems, and Cyril Cornabe as quality manager work in the ware­house. Sacks filled with einkorn are deposited in a bay, each one holding one tonne. “The grain can easily be stored for up to a year,” explains Cyril. For over­seas deliv­eries, for example, a truck trans­ports the grain to the port of Marseille, two hours away. One month later the order is in the US. Today, einkorn is avail­able as flour, baking mix, granola, whole grain, and also processed into noodles. 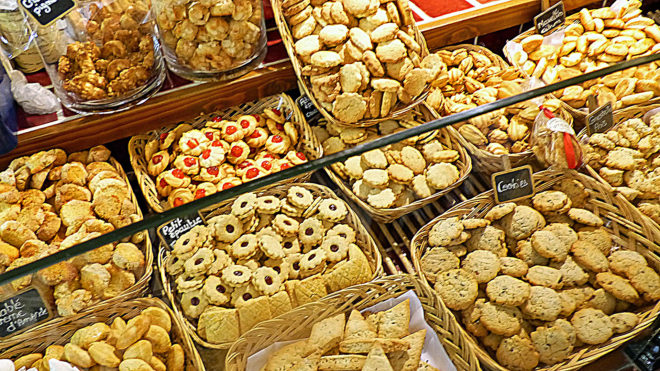 The small bakery, “Barret”, on the main road of Simiane-la-Rotonde boasts an impres­sive variety of einkorn prod­ucts.

The old grain variety, einkorn, is on-trend. For example, it is said to be easier to digest for people with gluten intol­er­ance. Demand is rising, and not only abroad. Einkorn wheat is also expe­ri­encing a revival in France. Even the small bakery, “Barret”, on the main road of Simiane-la-Rotonde boasts an impres­sive variety of einkorn prod­ucts. Nicolas Landel recom­mends the Boulan­gerie Au Pierrot d’Antan in Rustrel, half way along the road back to Apt. Fine-food lovers from far and wide make the pilgrimage to this place.

Einkorn grows along the road that takes you, while lavender blos­soms on the sloping slopes, right up to the top. There they are again: the dream team. “Simply an inge­nious crop rota­tion,” says Mr Landel. “One of the reasons why the farmers in this area are so proud is because they are able to continue a tradi­tion.”

Einkorn (Triticum mono­coccum) belongs to the oldest arable crops in Central Europe and has been culti­vated since at least 3,000 BC. Einkorn was wide­spread until Roman times. Later, it was almost completely replaced by bread wheat and durum wheat and only clung on in moun­tainous regions with barren soils. Laying claim to a total area under cultivation of around 1000ha, it is only of minor signif­i­cance in Europe today (mainly in Austria, Italy, Hungary and France). The cultivation of Einkorn has never been aban­doned completely in Provence, where it has tradi­tion­ally followed the lavender as part of crop rota­tion.

Einkorn has been cele­brating a come­back for about a decade. Once more, we can appre­ciate its merits: it is hardy, makes few demands on the soil, and copes well with periods of drought. It also contains very little gluten and is easily digestible. In Haute-Provence, farmers have joined forces to promote the cultivation of einkorn. Since April 2010, the variety native to Haute Provence has carried the EU “Protected Geograph­ical Indi­ca­tion” seal.

When Russia is mentioned, most people think of cher­nozem soils and vast wheat fields. Few people are aware that buck­wheat reveals a great deal about the Russian soul. This becomes clear at the very latest when you sit down to eat. Because Russian cuisine without buck­wheat is unthink­able. ﻿