Turnout in the Flint Hills

Each spring truck­loads of cattle from as far away as Mexico are brought to the Flint Hills, the last remnant of tall­grass prairie in North America to graze on the rich early-growth grass – a major logis­tics effort for farmers and forwarders.

There’s a peaceful tran­quility to the endless rolling land­scape of the Flint Hills that’s a little misleading. Take a spring­time drive down the inter­state highway that slices through this eastern Kansas grass­land and you’ll see scat­tered groups of stocker cattle (animals weighing 180 to 270kg) grazing lazily in lush green pastures. However, go behind the scenes, on the narrow black­tops and dusty rock roads that serve North America’s last stretch of tall­grass prairie, and you’ll witness the turmoil of turnout in the Flint Hills.

Turnout is how locals refer to the 20-day period in the spring when cattle from more than 1,000 miles (1,600km) away flood into the Flint Hills to graze on the rich, early growth of the native grass. Thou­sands of semi-trucks, each hauling 100 cattle or more, growl over the hills and through the scat­tered cow towns around the clock to deliver nearly a million head to their summer-grazing home.

“Turnout gets a little crazy,” said Pat Swift, manager of Live­stock Dispatch in Cotton­wood Falls, Kansas. “I load about 75 trucks a day, and there are three or four other guys in town doing just as many. On bigger pastures, some that are up to 4,500 acres (roughly 2000ha) in size, there can be 25 to 30 trucks lined up waiting to unload cattle.”

Mike Holder, district Exten­sion agent for Chase County, Kansas, puts this annual under­taking in perspec­tive. “There are 2,900 people who live in this county, and farmers and ranchers here raise about 2,000 cows through the year. But over about 20 days, usually starting in late April, more than 1,000 trucks bring in 120,000 stocker cattle, and we’re only 10% of the Flint Hills,” he says of the numbers.

“Timing is crit­ical,” said Cliff Cole, manager of the Ranch Manage­ment Group that over­sees seven Flint Hills ranches with an inven­tory of more than 50,000 cattle. “We need to get as much weight on our cattle as possible, and that means getting pastures stocked on time. It’s like harvesting wheat or planting corn – every day is extremely valu­able.”

“The cattle come from every­where,” added Swift. “Many are right out of Mexico, others come from grazing on winter wheat fields in Kansas, Okla­homa, and Texas. Some cattle come from the Corn Belt, where they grazed on corn stalks, and others out of Tennessee, Alabama, and the south­east. It takes every live­stock hauler we can find to get the job done.” 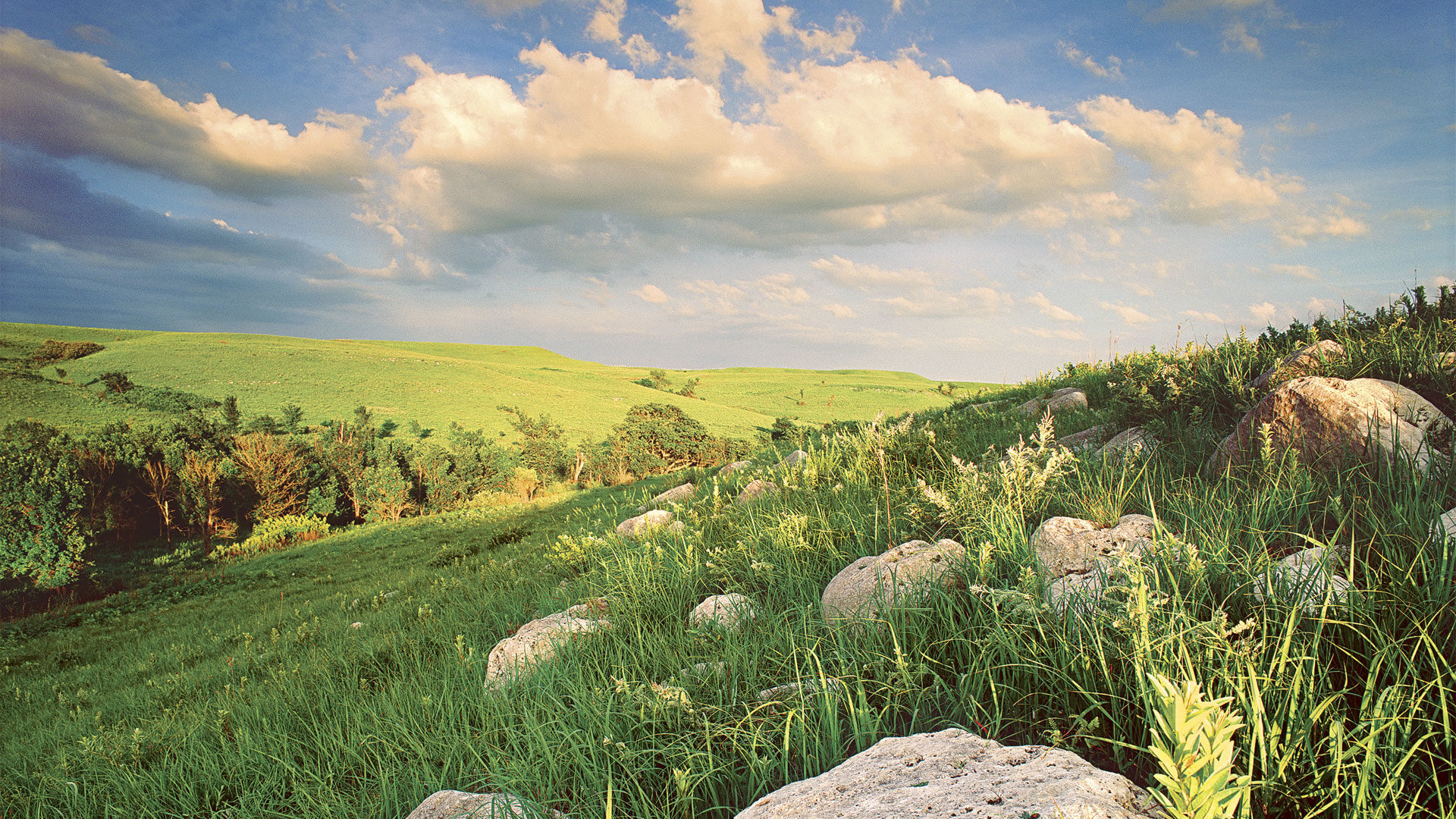 Trucks haul cattle to the Flint Hills today for the same reason train cars and trail drives have brought them over the past 150 years. It’s unques­tion­ably the most effi­cient and econom­ical place in the world to add weight to cattle. In the early spring, the native bluestem (Andro­pogon gerardii) pasture is so high in protein and minerals that the daily rate of gain on year­ling steers rivals that of feeding corn, but at a signif­i­cantly lower cost and with much less labour. “It’s truly amazing grass,” says Taylor Grace, a fourth- gener­a­tion Missouri rancher whose family has pastured cattle in the Flint Hills for nearly three decades. “In central Missouri, our cattle gain 1 to 1½ pounds a day (0.5 to 0.8kg/day), but send them to the Flint Hills from April to September and they gain 2½ to 4 pounds a day (1.2 to 2kg/day).”

At the Henderson Ranch, near Warsaw, Missouri, Grace helps growing cattle gath­ered from local cow/calf producers. “In April, we send several thou­sand head to graze on pastures we rent in the Flint Hills, either in double­stock or full-season programs. Pasture rent is heavily influ­enced by the price of corn, and ranges from $70 to $130 (€60 to €115) per animal,” he said.

Three decades ago, range manage­ment special­ists at Kansas State Univer­sity devel­oped an inten­sive early stocking program that trans­formed both the calendar and the cash flow on many Flint Hills ranches. The tradi­tional season-long program has cattle on the grass for 150 days at a stocking rate around four acres (1.6ha) per animal. In contrast, inten­sive early stocking takes advan­tage of the fact that the greatest gain is in the first part of the season. After mid-July the grass quality declines as nutri­ents are trans­ferred to the roots.

Holder explained that by doubling and even tripling the tradi­tional stocking rates, cattle are ready to move to feed­lots, typi­cally located in western Kansas, Nebraska, Okla­homa, and Texas, after grazing just 90 days. Research studies found the more inten­sive approach resulted in the produc­tion of an addi­tional 35 pounds of beef per acre (40kg/ha).

“So many ranches have shifted to inten­sive early grazing that the bedlam has gotten nearly as bad when cattle come off the grass in July as when they go on it in April. And, since they weigh 200 to 300 pounds (90 to 140kg) more than when they came, it actu­ally takes even more trucks to haul them out,” said Holder. 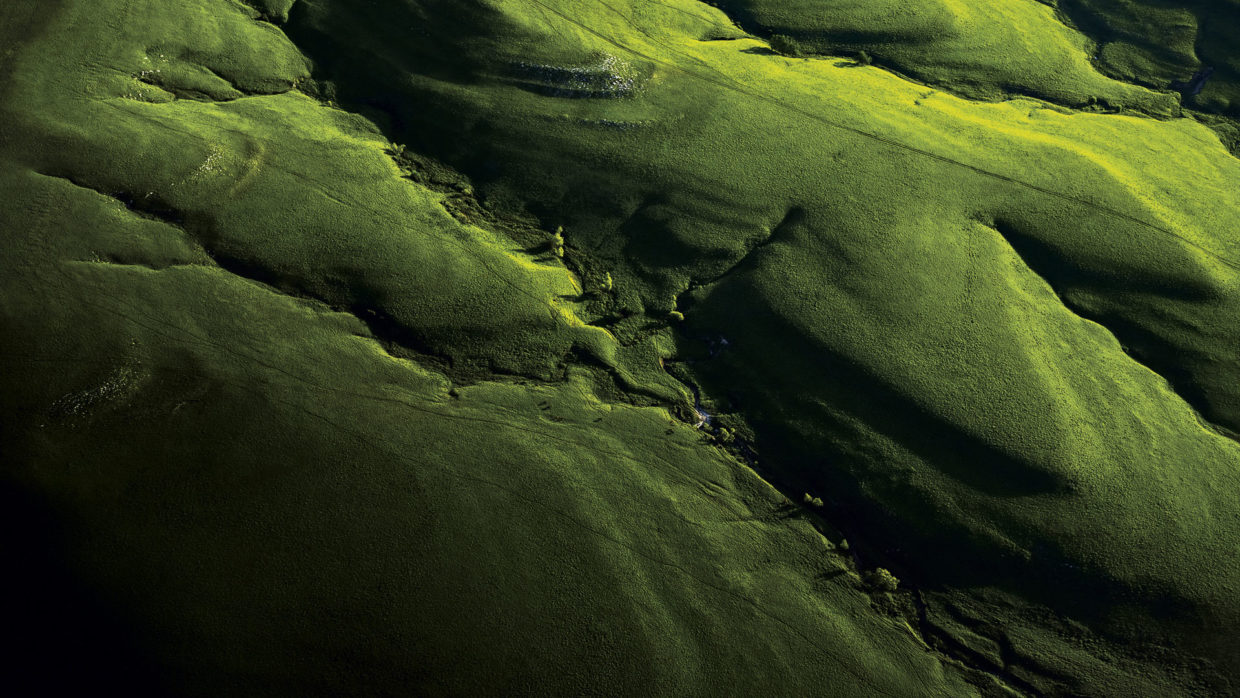 A spring­time carpet of grass lures a half-million grazing cattle. 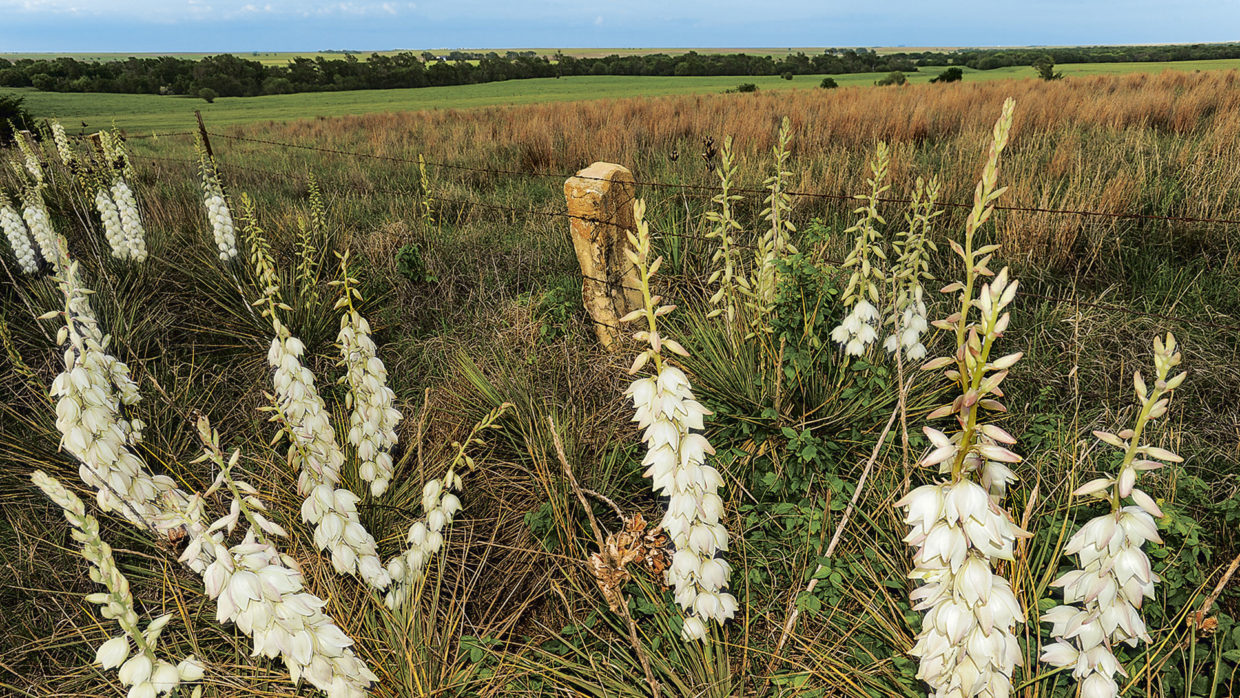 The Flint Hills are home to more than 700 different wild flowers. 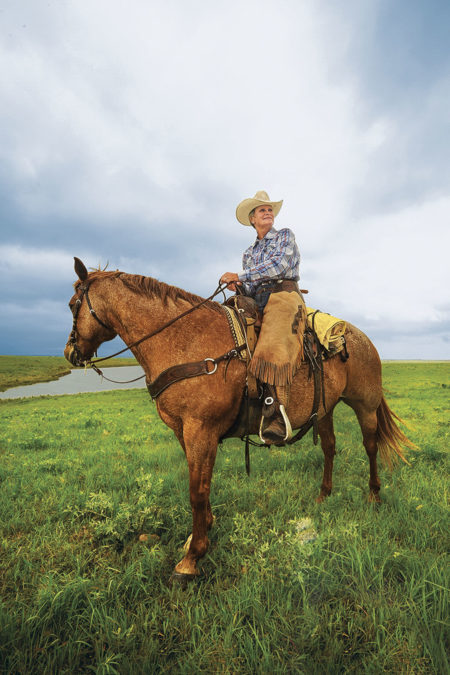 Volun­teers like Bobby Godfrey help explain the tall­grass culture to visi­tors at a recent Symphony in the Flint Hills.

Three features are largely respon­sible for the beauty and the bounty of the Flint Hills: shallow topsoil, fire, and a grazing culture. The first of those, the imbedded layers of shale and lime­stone that the first home­steaders encoun­tered, spared 4.5m ac (1.8m ha) of the grass­land from their ploughs, the fate that befell the rest of the orig­inal 150m ac (60m ha) of tall­grass prairie.

Fire has long been a crit­ical part of the Flint Hills’ ecosystem. Regular burning, whether due to light­ning, native Amer­ican Indians, or today’s ranch managers, has been a proven way to boost produc­tivity and also ward off the weeds and woody species that would other­wise turn the prairie into a wood­land.

“Mother Nature used fire to take care of the grass hundreds of years before cattle got to the Flint Hills, and we’ve learned to do the same,” said Ryan Arndt, a third-gener­a­tion rancher from Emporia, Kansas. Kansas State’s Clenton Owensby says steers grazing on pastures burned at the begin­ning of spring growth of the domi­nant tall­grass species will gain 32 pounds (14.5kg) more than on an unburned pasture. “Fire removes the old dead grass, allowing the soil to warm which spurs soil micro­bial activity and nutrient uptake. Also, burning releases nutri­ents in the old mate­rial and destroys woody growth,” he said.

Smoke as part of life 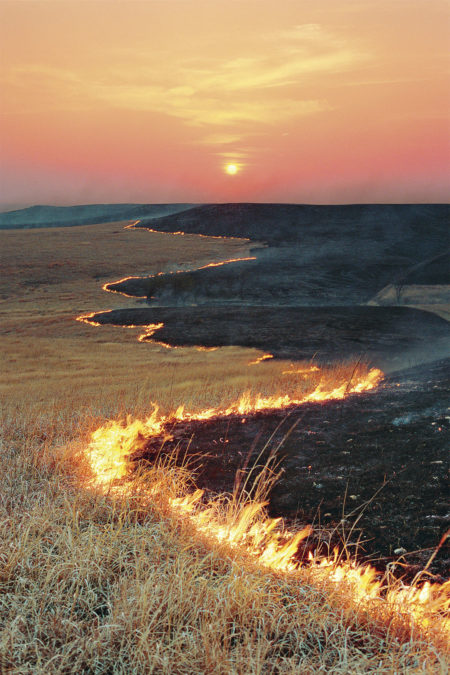 Prescribed spring burning and proper grazing are crit­ical to manage­ment of the tall­grass prairie.

Fire also creates smoke, and exces­sive amounts of it have raised air quality concerns in commu­ni­ties down­wind from the Flint Hills. Two years ago, the ranching commu­nity worked with the US Envi­ron­mental Protec­tion Agency (EPA) and state health offi­cials to develop a volun­tary Smoke Manage­ment Plan in response to those concerns. “The plan has helped some,” said Holder, “but when we burn a lot, like it looks like we will this spring, I’m afraid we could still have prob­lems. Ranchers, and those outside the industry who have studied the tall­grass ecosystem, under­stand that fire is a natural evil, and a little smoke is part of life out here.”

In 1867 a steer was worth about $2 in Texas, but $40 if it could be deliv­ered to Chicago. This huge profit poten­tial spurred the legendary cattle drives to the Flint Hills, where cattle were fattened before being shipped east. “Large tracts of land, unbroken by roads and other devel­op­ment, make seasonal grazing effi­cient,” said Holder. “There’s a desire among many fami­lies to keep ranches together through gener­a­tions. There’s also tremen­dous interest for current ranches to grow and for outside investors to put new ones together.”

There’s also tremen­dous interest in telling the story of the Flint Hills. Each spring, ranchers take turns hosting a grass-roots perfor­mance by the Kansas City Symphony. This Symphony in the Flint Hills gives local volun­teers a chance to share the beauty and explain the chal­lenges of their ranching lifestyle with a crowd largely from nearby cities of Wichita and Kansas City.

In similar fashion, the recently opened Flint Hills Discovery Center, in Manhattan, Kansas, uses an elab­o­rate array of exhibits and programs to aid visi­tors in under­standing the ecosystem of the tall­grass prairie. “The Flint Hills are truly unique,” says Arndt. “I feel it when riding home by the light of the moon after moving a string of cattle to a new pasture.”