The Columbia River is the largest river in North America in terms of the volume of water flowing into the Pacific. With over 26m tonnes of grain moving through it, it is the third largest trans­port corridor for grain.

With an almost imper­cep­tible nudge of the joystick, 4,500hp of tugboat muscle revs quietly as Captain Steve Coles lines up the Ryan Point with an anchored barge. The new tugboat is the pride and joy of the trans­port company Tide­water, as it was designed to be able to turn on the spot. Mr Coles, who has spent 38 years on the Columbia River, controls the boat with ease. It requires both power and a light touch to master these waters as they rush towards the Pacific at 8.5m litres/second.

Mr Coles and his four-person crew have already picked up two barges carrying 3,000t of grain each in Pasco, Wash­ington and brought an empty natural gas barge to Pacific Ethanol in Boardman, Oregon (see map). A few yards further down­stream, they are picking up a barge of empty steel containers that carry Vancouver, Washington’s solid waste to a land­fill site on the other side of Boardman. Freight trains stretching for miles trans­port grain from North and South Dakota, potash from the Prairies and even Ford cars from Detroit to ports in the North West Pacific region for export. The trains may reach their desti­na­tion long before Mr Cole’s ship does, but he only needs about one litre of diesel per tonne of wheat to get the tugboat the 170 miles from Boardman to Port­land. 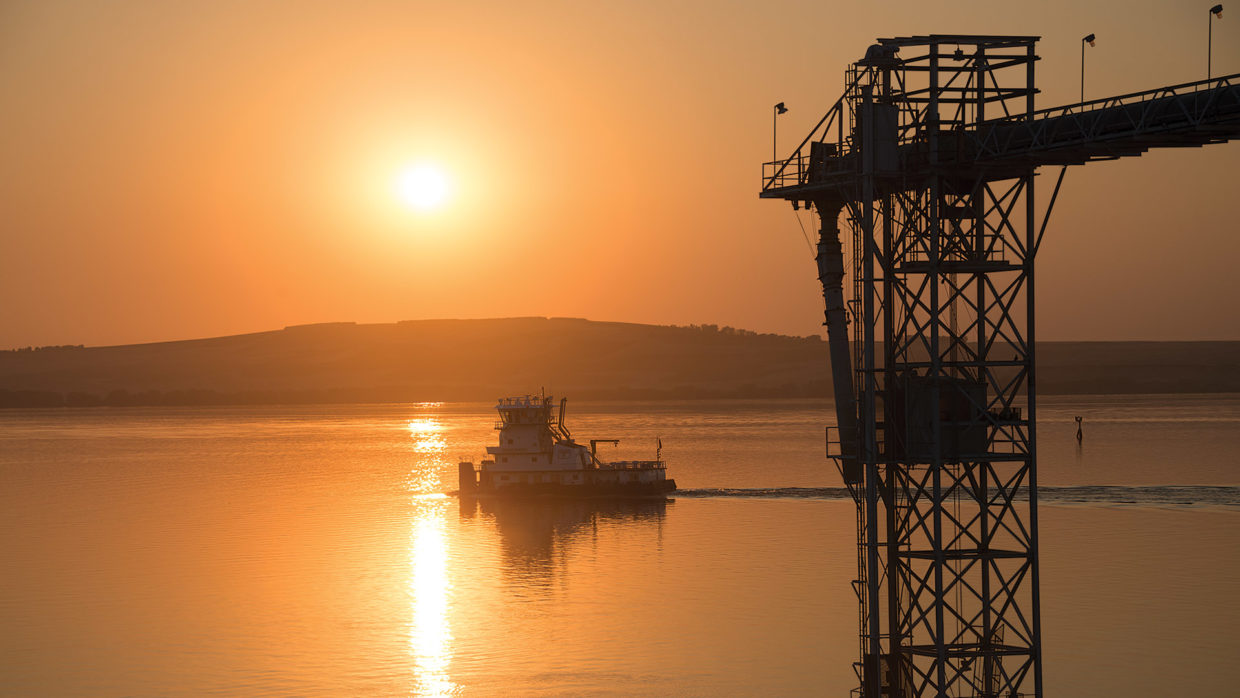 The Ryan Point enters the port of Morrow to pick up a barge loaded with wheat.

Down­stream from Boardman, the Ryan Point will pass through three of the five dams on the Columbia River, past hydro­elec­tric turbines that used to supply the area’s aluminum smelters and aircraft facto­ries with elec­tricity during World War II. Now they supply energy to enor­mous server banks by the river to keep the internet working and the digital world moving along.
Gazing through his window nine metres above the surface of the water, Mr Coles looks out on the khaki-coloured hills of Morrow County, Oregon. Along the horizon are the circular sprin­kler systems that draw 1% of the Columbia’s water to trans­form the desert into a fertile land for growing pota­toes, onions, mint, vegeta­bles and alfalfa. Behind him, on the north bank, vine­yards cling to the steep slopes.

This place, also known as “River Mile 270”, is roughly in the middle of the almost 465-mile (750km) long Columbia River system (which includes its largest trib­u­tary, the Snake River). It is a micro­cosm of every­thing that makes Amer­ican rivers and the land­scape around them so magnif­i­cent, fasci­nating, and yet chal­lenging. On the river there are boats, barges, fishing skiffs and speed­boats. This region not only grows agri­cul­tural crops, it processes and ships them too. Data is stored and of course, livings are earned.

Vancouver, Wash­ington, is a trans­port hub for US exports of grain to customers in the Asia-Pacific region.

Maize from Midwest farmers is processed in Boardman into biofuel which is trans­ported to Port­land, Oregon, via the Columbia.

Because of favourable soils and climate condi­tions the banks of the Coumbia river are prime loca­tions for growing wine grapes with a very special flavour.

The Morrow County grain growers export their grain harvest to their customers world­wide through the Port of Morrow on River Mile 270.

The Port of Morrow is incred­ibly diverse, according to Kristin Meira, exec­u­tive director of the Pacific North­west Water­ways Asso­ci­a­tion. “They are not doing a little of every­thing. They’re doing a lot of every­thing.” A plethora of different compa­nies processing every­thing from pota­toes to cheese to data have estab­lished them­selves here in a 3,200ha area on a network of roads, rail­ways, pipelines and power­lines. Along­side a conven­tional power plant that converts natural gas into elec­tricity, one of the compa­nies is exper­i­menting with biofuel, while another is distilling corn grown in the Midwest into ethanol. Together with the port, these compa­nies pay out around US$500m (£383m) in wages every year to more than 8,400 employees.

Gary Neal, the port’s general manager, points out that Morrow boasts the third-highest average income anywhere in Oregon. Some­thing that could help Boardman and the other neigh­boring commu­ni­ties to hold on to the next gener­a­tion through chal­lenging and well-paid jobs. “You don’t need to move to a metro­pol­itan area to get a job in tech,” Mr Neal says. For elec­tri­cians, lab tech­ni­cians, plant tech­ni­cians and other tech­nical profes­sions, the region around Boardman – which has been isolated for so long – is now a popular place to come and work. 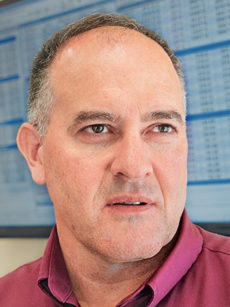 Just 12 to 18 hours by barge from the export termi­nals around Port­land, mile 270 is also a strategic place to be. “The river gives us just a great trans­porta­tion tool that’s safe, it’s reli­able, and it does such a great job in helping us get the crop out of the inte­rior and into the export chan­nels,” says Kevin Gray, general manager of the local agri­cul­tural co-oper­a­tive, Morrow County Grain Growers. Both red and white wheat is trans­ported from a 60-mile radius to the river, and is even­tu­ally exported, primarily to Asia.

The river gives us just a great trans­porta­tion tool that’s safe and reli­able.

The agri­cul­tural co-oper­a­tive can store up to 27,000t of grain at the Port of Morrow and has already laid the ground­work to expand a further 16,000t. This will make it possible to trans­port maize from freight trains in the Midwest and load it directly onto barges.

Next door to the Morrow County Grain Growers, Pacific Ethanol unloads a train of Midwestern maize every 10 days, says manager Daniel Koch. The company distills this into biofuel and ships it to refineries in Port­land by barge. Every day, 25 truck­loads of wet distillers’ grains supply feed to around 100,000 cattle in a 50-mile radius of Boardman and corn oil is trucked to poultry farms in Oregon and Utah. The effi­cient trans­port of maize and ethanol, as well as the region’s bustling buyer market for by-prod­ucts are crucial reasons to minimise the carbon inten­sity, Mr Koch notes.

Thanks to the irri­ga­tion lines that trans­port the river water to farm­land, a successful potato and vegetable industry has been estab­lished in the Columbia Basin. Farmer Jake Madison from Echo, Oregon says water is the differ­ence between producing a US$250 (£191) dryland wheat crop every other year and harvesting vegeta­bles and onions that can gross US$14,820/ha (£11,347/ha).
The life­line that ensures Madison’s boun­tiful harvests is a 20m long pipeline and canal system that trans­ports the river water to his farm. Applied spar­ingly using 86 centre pivots and other irri­ga­tion systems, he is able to opti­mally divide the water between his fields. 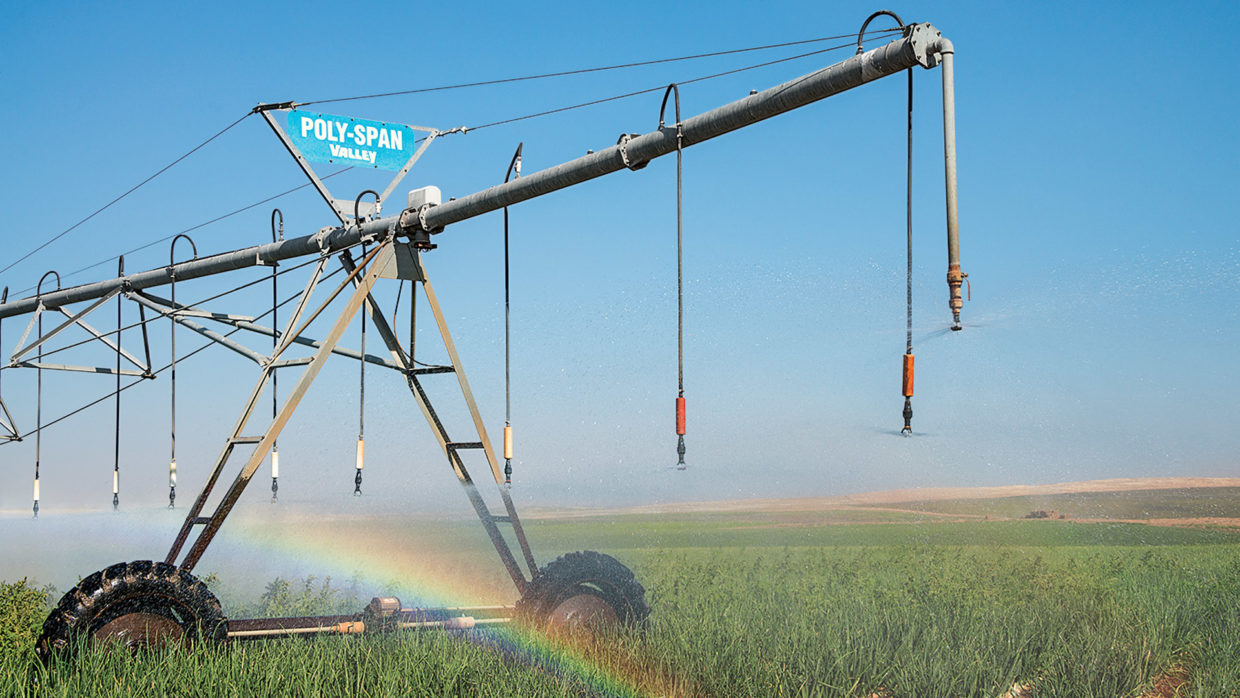 Farmer Jake Madison from Echo diverts river water through a sophis­ti­cated irri­ga­tion system to his fields to supple­ment the annual rain­fall of around 178 mm.

Since his father secured the last unre­stricted water rights to get access to the Columbia in the 1990s, the Madisons have been refining the farm’s water conser­va­tion programme. Mr Madison explains that the yield poten­tial of each crop is analysed, along with the amount of water needed to achieve this. Seeding popu­la­tions, fertilisers and watering sched­ules are opti­mised to make the most of the water avail­able. 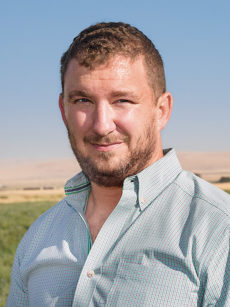 Tech­nology takes care of the of the rest. Real-time neutron mois­ture probes, drop tubes on the pivots, and pres­sure regu­la­tors have signif­i­cantly reduced water consump­tion. Today Mr Madison consumes just over half of the total water used when the farm first started irri­gating. “We can actu­ally grow better quality crops with less runoff,” he explains.

We can actu­ally grow better quality crops with less runoff.

Mr Madison’s oper­a­tion also plays a key role in the port’s envi­ron­mental sustain­ability and local agri­cul­tural economy. He is among a number of others who are using partially treated indus­trial water from the port’s indus­trial plants to supple­ment his irri­ga­tion rights on non-vegetable crops. “It’s got a pretty good nitrogen load to it and it’s liquid, so we can grow crops on it,” he says. “It’s a least-cost alter­na­tive to having them just treat it and dump it back in the river. With this addi­tional water and nutrient supply, we can continue with our crop rota­tion and even expand it.” 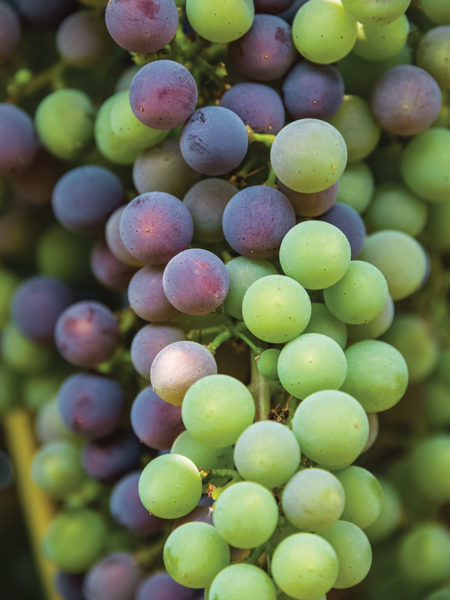 In total, the water from the port is spread across about 4,856ha, making it one of the largest areas in the country to take advan­tage of indus­trial water in this way, and at the same time be of enor­mous benefit to the regional agri­cul­ture. “When you have a region that gets about 180mm of annual precip­i­ta­tion, most places really need the water for irri­ga­tion anyway,” Mr Neal says.

The Columbia River has always trans­ported much more than just freight. Thanks to the soil deposits left by glac­iers, the floods that formed the course of the river, and the wind that follows the river inland, the region’s wine cultivation is really booming. Wine­maker Brit­tany Komm at Precept Wine says that the grapes on the north bank of River Mile 270 make excel­lent wine that strongly reflects the local condi­tions.

“The river is the reason this is such a great growing site,” she says. “We are warm-to-hot in the summer. Around harvest, we cool down just enough to allow for extended hang time, which lets the grapes develop flavour, colour, and sugar.” According to Ms Komm, the wind blows in an ideal direc­tion up for the vine­yards, so the grapes get thick skins that give deep, dark colors and a lot of tannins.

Back in Boardman, the port oper­ator and its tenants decided to share the local features of interest with the public and carry out profes­sional marketing. They created the SAGE Centre (Sustain­able Agri­cul­ture and Energy), that is a magnet for more than 20,000 visi­tors annu­ally, with exhibits ranging from a French fry processing to scale models of barges.

The visi­tors are fasci­nated by the Tide­water exhibit, which high­lights the effi­ciency of barges. A four-barge tow can trans­port 12,500t of grain – the equiv­a­lent of 140 rail cars or almost 500 trucks – with fewer acci­dents and lower emis­sions. “We move between 3m and 3.3m tonnes of grain a year,” says Bruce Reed, COO of the ship­ping company Tide­water. “If all that grain had to move on another mode of trans­porta­tion, it would certainly clog up the high­ways.” 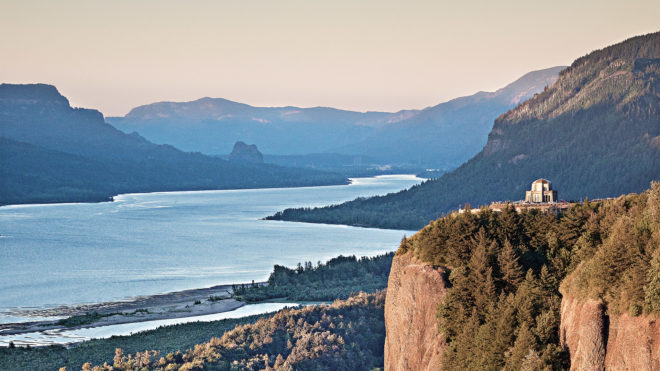