A guide to low carbon farming

Agri­cul­ture is a contrib­utor to green­house gas emis­sions world­wide, but the adop­tion of low carbon prac­tices can turn this around.

Over the past 200 years farming has released carbon dioxide into the atmos­phere, explains Tom Tolputt, mixed farmer and consul­tant. “Modern farming prac­tices such as deep tillage, fertiliser and pesti­cide appli­ca­tion release a lot of green­house gases. Nitrogen fertiliser produc­tion is very carbon dioxide heavy and a recent study has shown it actu­ally burns carbon out of the soil.”

However, there are ways of building soil health and organic matter such as reducing tillage, changing grazing prac­tices, intro­ducing peren­nial species into arable rota­tions, and limiting the use of harmful chem­i­cals.

If we can put 0.1% of organic matter back into the soil a year, this will sequester 8.9t/ha a year of carbon back into our soils.

“If we can put 0.1% of organic matter back into the soil a year, this will sequester 8.9t/ha a year of carbon back into our soils,” says Mr Tolputt. “Which also builds the ability to access and hold nutri­ents and will also improve soil biology and drought resis­tance.”

Ploughing and deep tillage bring soil to the surface. “In this process carbon is released from the soil to the air and the envi­ron­ment for the mycor­rhizal is destroyed.”

Reducing tillage keeps the mycor­rhizal in place to func­tion and mobilise phos­phate to the plant. “If there is a need for ploughing in a rota­tion apply a mixture of molasses, mycor­rhiza, tricho­derma and bacteria as a spray on an estab­lished seedbed to encourage good biolog­ical activity in the soil. This will give the bacteria and fungi a food source to repop­u­late the soil and help the soil biology.”

A soil pit should be dug to estab­lish compaction levels and then subse­quently every three years to under­stand the impact of the reduc­tion of tillage. “The move to reduced or zero till in conven­tional systems will help in preserving soil carbon.”

Growing cover crops or keeping a crop growing in the soil at all times keeps the soil biology alive. “It’s not a well-known fact but each plant pushes down 30-40% of the energy it photo­syn­the­sises in the form of root exudate – which is full of nutri­ents and feeds the soil biology. With bare ground the bacteria in the soil are not being fed, and so start to die off release carbon.”

The more diver­sity above the soil is rela­tive to the number of ecosys­tems being fed in the soil.

“There are no mono­cul­tures in nature and different plants will support different bacteria in the soil – for example bras­sicas don’t support mycor­rhiza in the soil very well, whereas oats or peren­nial crops do.

Also deep rooting crops like cocks­foot or chicory will push sugars and exudates further into the soil and support more ecosys­tems as well as seques­tering carbon.

As a signif­i­cant amount of a plant’s energy is returned back to the soil, this helps support the bacte­rial and fungal networks which then provide nutri­ents back to the plant; a form of symbiosis.” 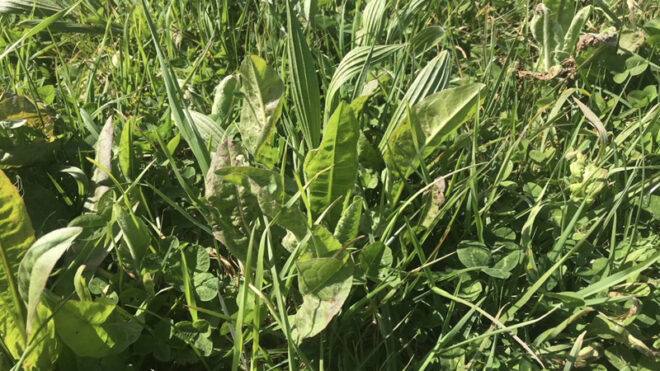 A diverse ley will provide different levels of the soil with nutri­ents.

Detri­mental prac­tices including heavy culti­va­tions, spraying fertiliser in high doses such as urea or ammonia – these should be avoided. Try to make sure the nitrogen used is slower release; nitrogen sulphate or combined with a source of humate or alter­na­tively substi­tuted for liquid appli­ca­tions. “The appli­ca­tion of urea or harmful forms of nitrogen can effect on the soil carbon and bacteria.”

Tailoring the rota­tion to the local climate means crops require fewer inputs to grow success­fully, advises Mr Tolputt. “For example wheat is more suited to drier climates and fodder beat and oats are more suited to a costal envi­ron­ment.”

Step 6: Consider animals in the rota­tion

A more tradi­tional rota­tion involves grazing animals on peren­nial crops. “These deep rooting crops help to build soil biology, soil nitrogen and sequester carbon – this reduces the amount of nitrogen required for the next crop.”

Holistic grazing, where animals are rota­tion­ally grazed and moved onto a new paddock every 24-72 hours, creates a symbi­otic rela­tion­ship in which the animals graze, digest and defe­cate – providing nutri­ents and bacteria back to the soil.

Typical crops which could be included for a grazing ley are, cocks­foot, chicory, plan­tain, red and white clover and trefoil. “Including these mixes in grazing or cutting leys will increase drought toler­ance and increase carbon seques­tra­tion within the soil, adding to a greater poten­tial carbon benefit.”

Water is one of the essen­tial foun­da­tions of agri­cul­ture. How will its avail­ability in Europe develop in the future? Our info­graphics provide an overview.﻿