Poplar trees: A wind­break for crops

In Germany trees in the fields have a repu­ta­tion for nega­tively affecting crop yields. A recent study in the south-eastern German State of Bavaria has now shown this is true, but only in the imme­diate vicinity of the trees. Outside of this vicinity, oat, wheat, and clover grass yields actu­ally increase because of the favourable micro­cli­mate the trees help to create.

“We farmers and foresters hold the key not only to stop­ping climate change, but to cooling down the earth’s atmos­phere,” Sepp Braun states emphat­i­cally. The key that the organic farmer from Pulling in the Bavarian district of Freising describes isn’t to be found in his hand, but in his field: Trees. Although he started planting three-row poplar strips every 60-80m across his fields in 2008, Mr Braun hasn’t expe­ri­enced lower yields. Wheat, oats and clover grass all produce the same average yield across a hectare including tree strips as on culti­vated neigh­bouring land without. This was the conclu­sion of a research project enti­tled: “Devel­op­ment and testing of an agro­forestry system combining organic agri­cul­ture and short rota­tion forest”. 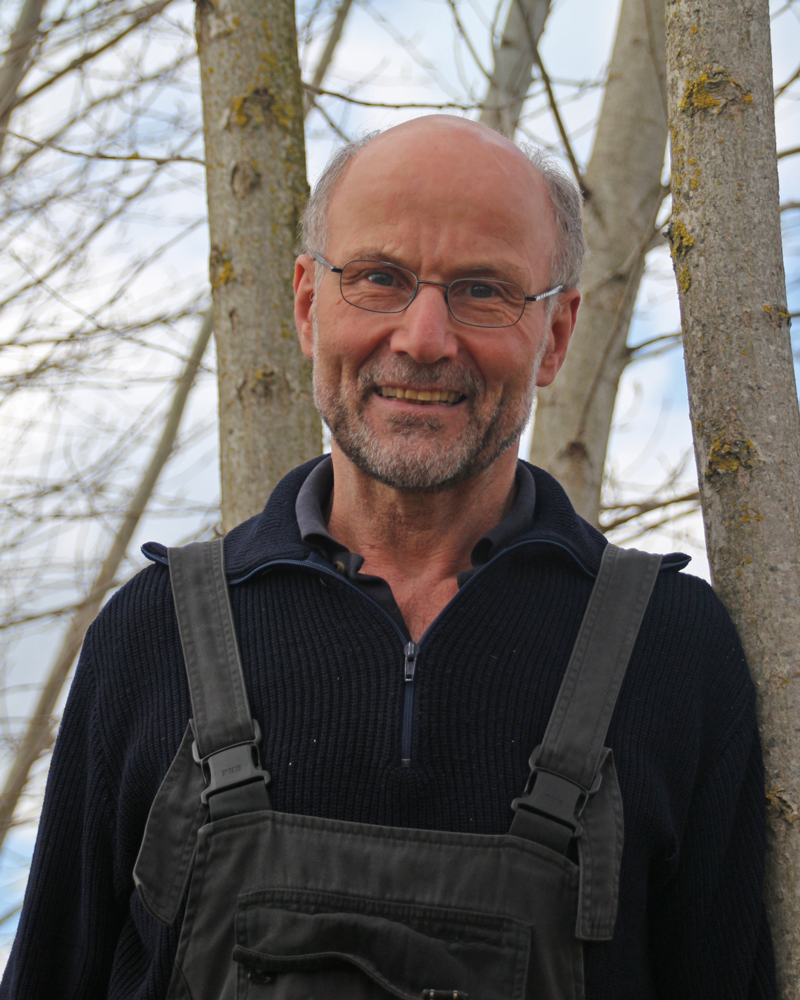 But how does it work? It’s true the silvo-arable systems where woody plants like trees and shrubs are grown along­side arable crops are helpful or even neces­sary for agri­cul­tural produc­tion in many parts of the world. But in Germany, a country which has so far been subjected to favourable climatic condi­tions for agri­cul­ture, these systems struggle to gain support as they are said to reduce yields. After all, the roots of trees don’t just stop growing at the boundary to the field.

We hold the key not only to stop­ping climate change, but to cooling down the earth’s atmos­phere

Poplar strips – a new source of fuel on the farm

A no-plough organic farmer, Mr Braun has worked in forest gardens, perma­cul­ture, and agro­forestry for many years. It was the lack of expe­ri­ence with energy wood from agro­forestry systems in organic farming in Bavaria that saw him launch the study, for which he later made his own field avail­able and planted his second energy wood system. With the timber he produces, he produces his own energy and has since become energy self-suffi­cient.

The two types of hybrid balsam poplar, Max 1 and Max 3, were first planted as cuttings which kept the initial invest­ment costs low. Mr Braun planted 30-40m long strips 60-80m apart in the middle of a 1.2ha field in a 1.25 x 1.5m forma­tion of three double rows, posi­tioned at right angles to the main wind direc­tion. The 10m wide tree strips took up 13% of the arable land in the field.

But the biggest chal­lenge in the first years was keeping vole damage and weed growth to a minimum without the use of herbi­cides. After that, there was not much to do until the first poplar harvest seven years down the line. Fertiliser was not neces­sary, as balsam poplar doesn’t react to the appli­ca­tion of nutri­ents in the soil, according to trials carried out by the Bavarian State Insti­tute of Forestry (LWF). 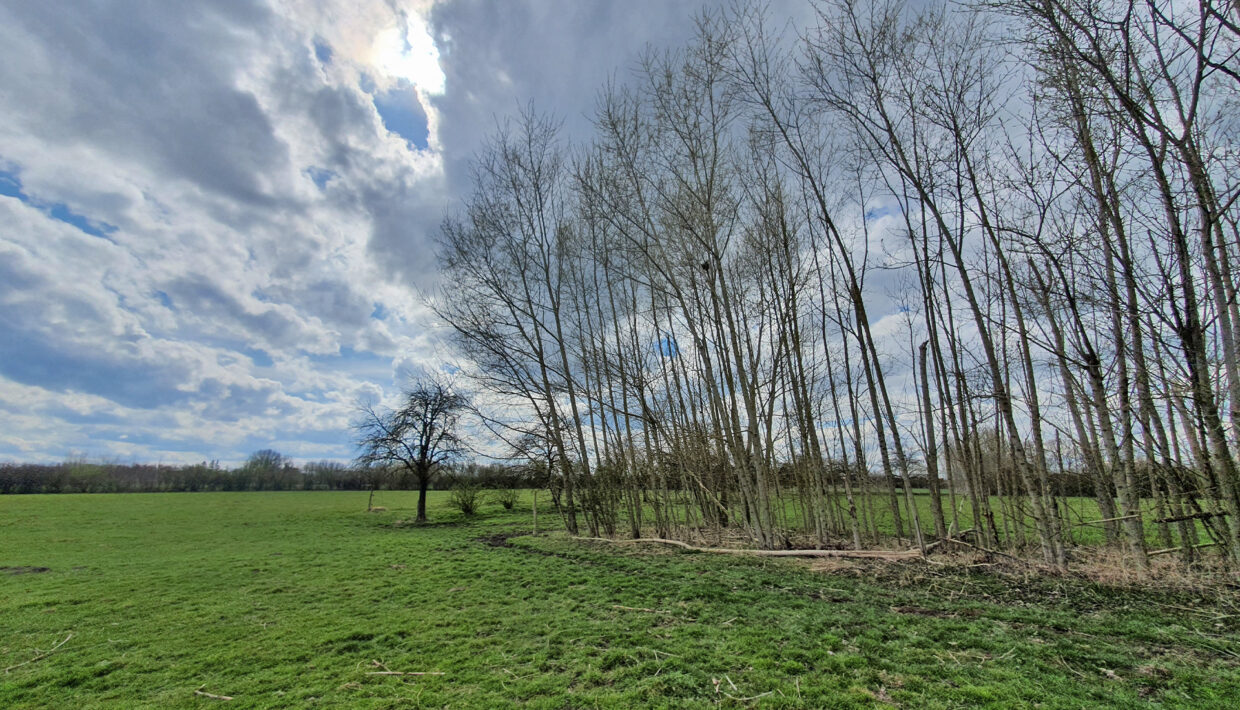 The balsam poplar hybrids stand in strips in the middle of a field in a group of three double rows across the prevailing wind direc­tion.

Annu­ally, researchers measured the yield of oats, winter wheat and clover grass that grew in the field next to the tree strips. Results revealed that the yield decreased in the imme­diate vicinity – five to 10m around the poplars. But outside of this, the addi­tional yields recorded compen­sated for the loss. By calcu­lating the average annual yield for the field, they found there was no signif­i­cant differ­ence in yield between the area with tree strips and the neigh­bouring field without. And the trees didn’t reduce the grain quality nor the total energy output of the clover-grass mixture to the extent that it impacted on commer­cial use.

Although this may mean little at first, the signif­i­cance of these find­ings can be explained prac­ti­cally: The tree strips reduce wind speed and posi­tively influ­ence the micro­cli­mate. Directly behind the tree strips, the rela­tive wind speed dropped to about 40% and 50m from the poplars, it was 20% lower.

What is an agro­forestry system?

Agro­forestry is a system that combines the use of trees and shrubs with crops or live­stock, with the aim of bene­fiting from the posi­tive inter­ac­tions that take place between its compo­nents. Agro­forestry systems are consid­ered to offer numerous envi­ron­mental advan­tages when compared to complete clearing methods, espe­cially in trop­ical rain­forests. Against the back­drop of climate change, the systems are now also gaining popu­larity in Europe. It is a revival of the prac­tice more than anything else, because agro­forestry systems are nothing new. In partic­ular, silvo-pastoral systems which combine live­stock farming with forestry, were tradi­tion­ally very common on the Euro­pean conti­nent. Wood pastures are still often used as sites for live­stock to graze. In modern Euro­pean agro­forestry systems, walnut or energy wood strips are often planted in arable fields to make a silvo-arable system. In contrast, fodder hedges – often hazel or willow – for cattle or small rumi­nants, like sheep and goats, are still rela­tively unknown.

The researchers suspect the reason of the uneven spatial distri­b­u­tion of yields is the compe­ti­tion for light, and protruding branches that made precise soil cultivation near the poplar strips more diffi­cult. “Yields are lower in the areas shaded by trees, this is of course not the same for all crops. But these losses in yield are compen­sated for by the overall improved growth in the area,” Mr Braun explains.

The organic farmer and other project partic­i­pants suspect the advan­tages of tree strips for increasing yield would become much clearer in other loca­tions. Freising bene­fits from a favourable micro­cli­mate, with little wind, less sunlight than the south of France and good quality soils. The micro­cli­mate at the site does not over-compen­sate for the reduced yield around the tree strips. But the more favourable the micro­cli­mate is, the lower the gains from agro­forestry. “We have shown that tree strips do not reduce yields at such sites and that is a good result,” Mr Braun finds. 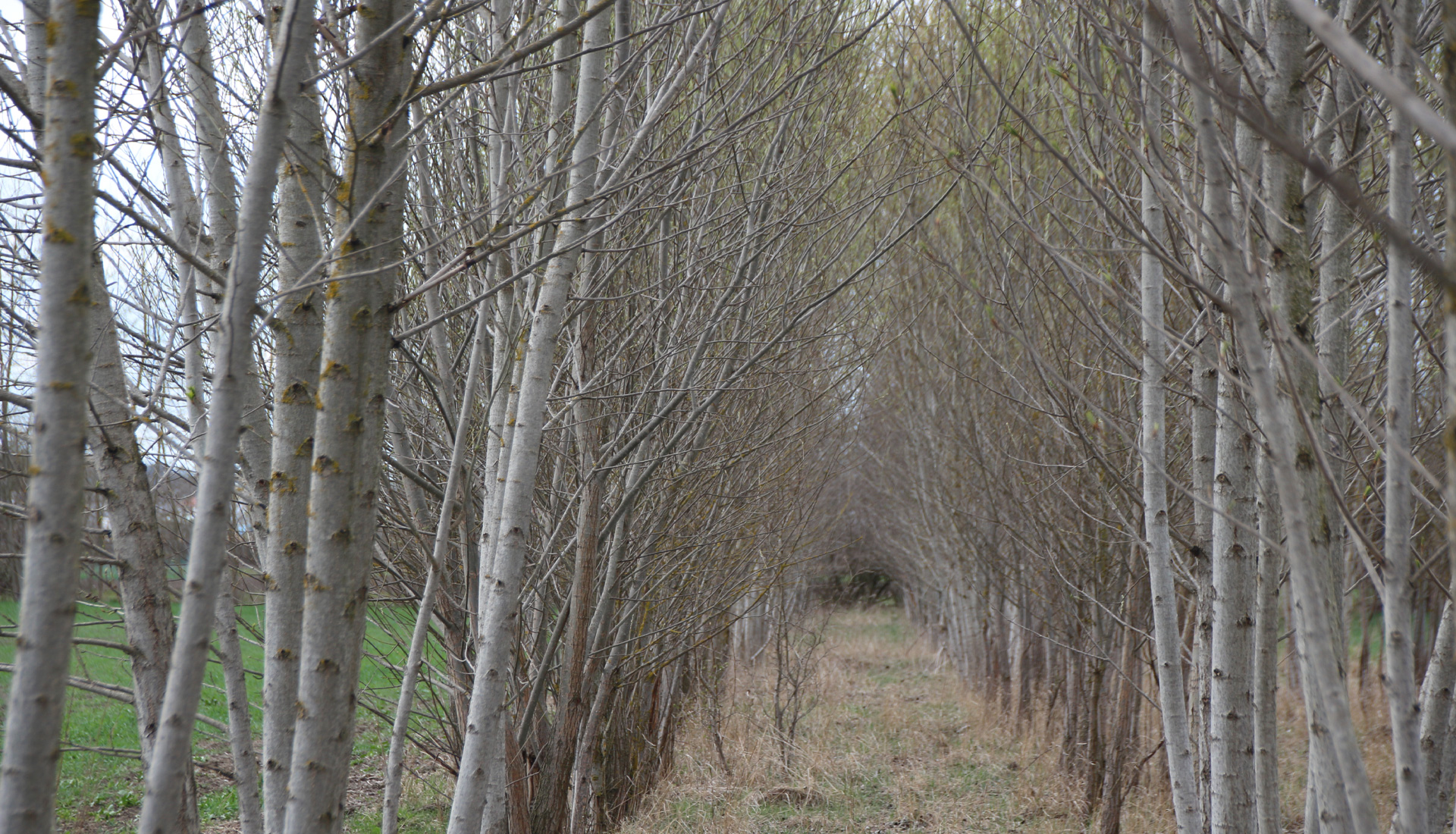 A study from Bran­den­burg supports the assump­tion that agro­forestry systems are partic­u­larly useful in places with less favourable micro­cli­mates. On large areas with light, sandy soils at risk of wind erosion, the addi­tion of energy wood strips increased sugar beet yields. Agro­forestry systems also seem to favour higher yields in dry years. For example, the authors of a northern German study measured higher winter wheat yields in a trial agro­forestry system than in a tree­less control site in the dry year of 2012. They suspected the more favourable weather condi­tions created in the agro­forestry system were a possible cause of the differ­ence in yields at the two sites. However, the exact effect on arable crop yields varies according to tree species, planting density, age of the trees and crop type, among other factors.

According to a Belgian study, strips of two- to seven-year-old poplars had little effect on the yield of forage maize, pota­toes, winter wheat and winter barley. Around the 15- to 48-year-old decid­uous trees, however, the researchers observed yield losses, espe­cially in the cases of maize and pota­toes.

Anyone who wants to plant energy wood strips in organic farming faces one chal­lenge: Keeping weed growth to a minimum without the use of herbi­cides, only this way can the poplars really take off in the first few years. In the Bavarian trial, several different weed regu­la­tion possi­bil­i­ties were tested: The appli­ca­tion of a self-degrad­able mulch film based on maize starch as well as camelina, white clover, winter rye or yellow clover as nurse crops. With all vari­ants and even without weed control, the poplars grew success­fully, so the use of camelina, winter rye and white clover as nurse crops is recom­mended.

As a result of rising energy prices, Mr Braun has found producing his own wood and energy is a worth­while venture. He also expects agri­cul­ture to be included in carbon trading. If so, tree strips, which remove and store CO2 from the atmos­phere, would generate addi­tional income.

However, under no circum­stances should farmers plant energy wood with the inten­tion of getting a super price for the chips in seven years’ times, warns Dr Frank Burger from the LWF. Raw mate­rial prices, including wood chips, fluc­tuate too extremely for that to happen. So, it is impor­tant to inte­grate the use of wood into the busi­ness, for example as wood chips or wood fuel. “That way, I am not reliant on the price of crude oil. If suddenly the price of heating oil drops to 20c/litre (17p/litre), selling the wood is no longer worth­while, but I just must put up with it,” says Dr Burger. 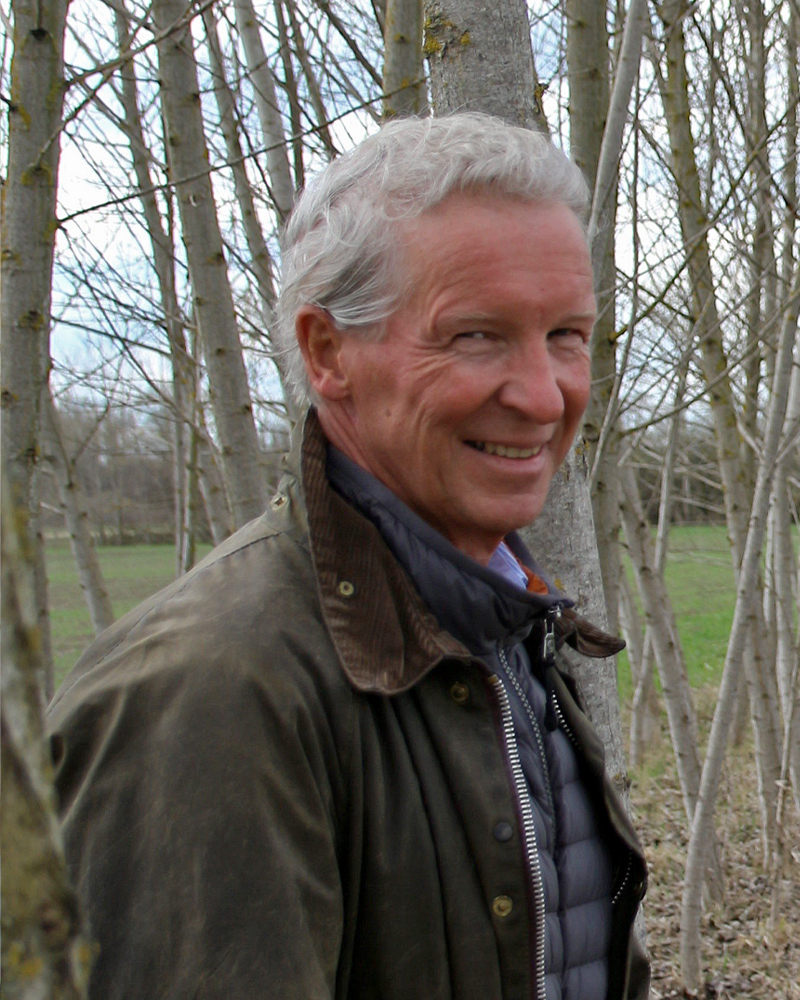 The Agro­forestry system can produce energy for me free of charge.

The deci­sion to plant your own energy wood strips needs to be care­fully consid­ered. Once the trees have been planted, they should be left to mature and should not be cleared prema­turely, other­wise it isn’t worth­while planting them in the first place. Only after several crop rota­tions do the costs of planting and clearing the energy wood strips pay off. “If, after eight years, I think about uprooting the system again, I would be throwing money down the drain. As soon as I have repaid the costs of the initial invest­ment, the system produces energy for me free of charge,” explains Dr Burger.

Other bene­fits of poplar

In any case, energy wood strips will prob­ably not become the new cash cow on the farm. But with lower initial invest­ment costs, they require little main­te­nance once in the ground. They do not neces­sarily nega­tively affect crop yields and can increase them under certain circum­stances. The wood also helps to reduce oper­ating costs on the farm. Char­coal, produced during gasi­fi­ca­tion, can be used to improve soil health, another advan­tage. In addi­tion, the poplar strips enrich biodi­ver­sity which makes the farm more resilient. 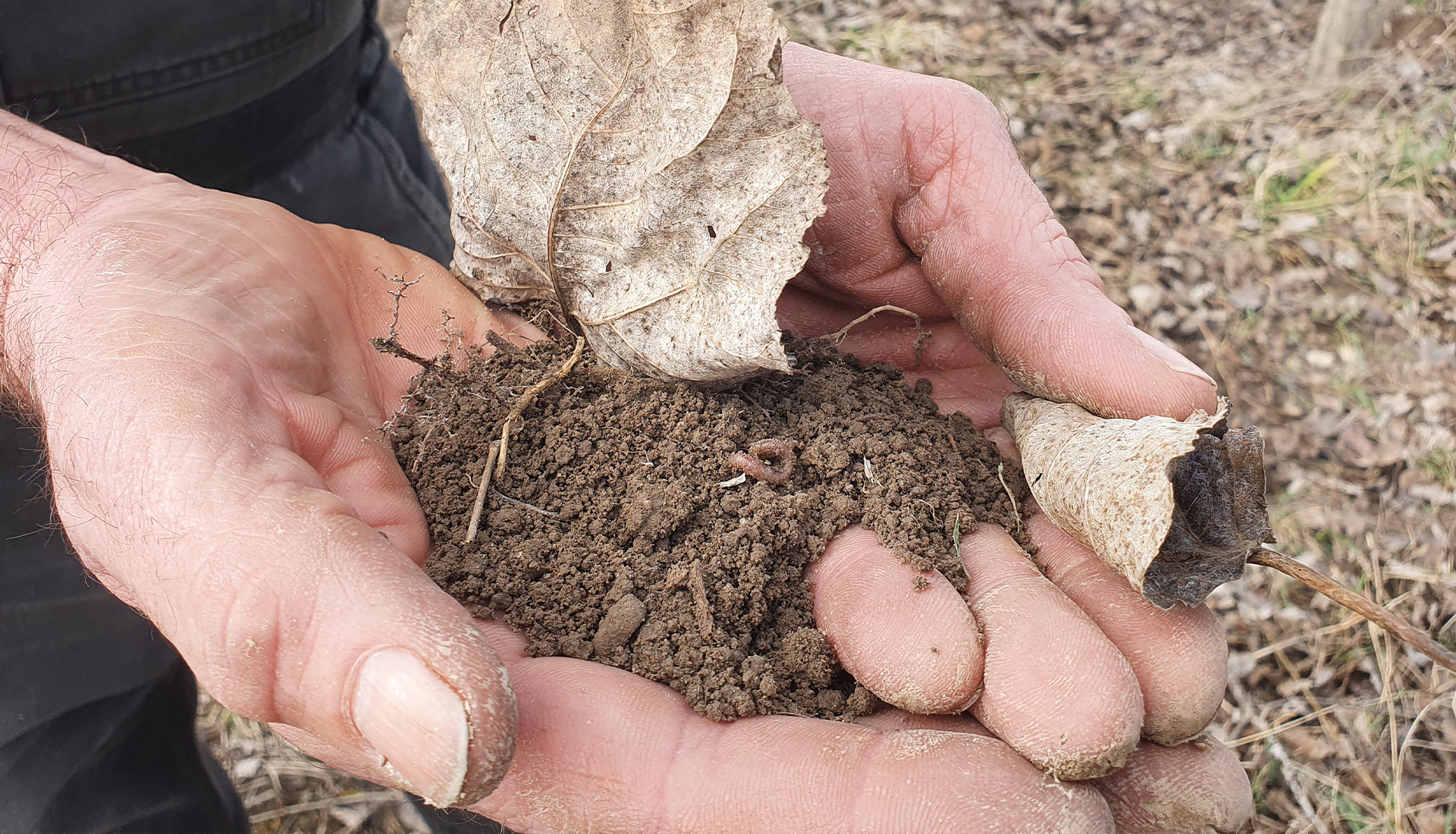 Trees leave good soil. The leaves, roots and earth­worms under the poplars make for a good humus.

Even earth­worms feel at home under the poplars. In the poplar strip, Mr Braun’s dog only has to dig a little before the earth­worms can be seen wrig­gling about on the surface of the soil. “The earth­worm biomass is much higher under the poplar than under a beech tree,” explains Dr Burger, who has tagged along to see the field with the farmer. Mr Braun is already dreaming of the soil quality the poplars will leave behind after their 40-year spell in the ground. “You can’t quite believe the quality of humus the leaves and roots add to the soil,” he says. He is convinced the agri­cul­ture sector will simply not be able to do without agro­forestry systems in the long run. And chal­lenges like climate protec­tion, water conser­va­tion, species protec­tion, soil conser­va­tion and drinking water protec­tion make them a neces­sity. 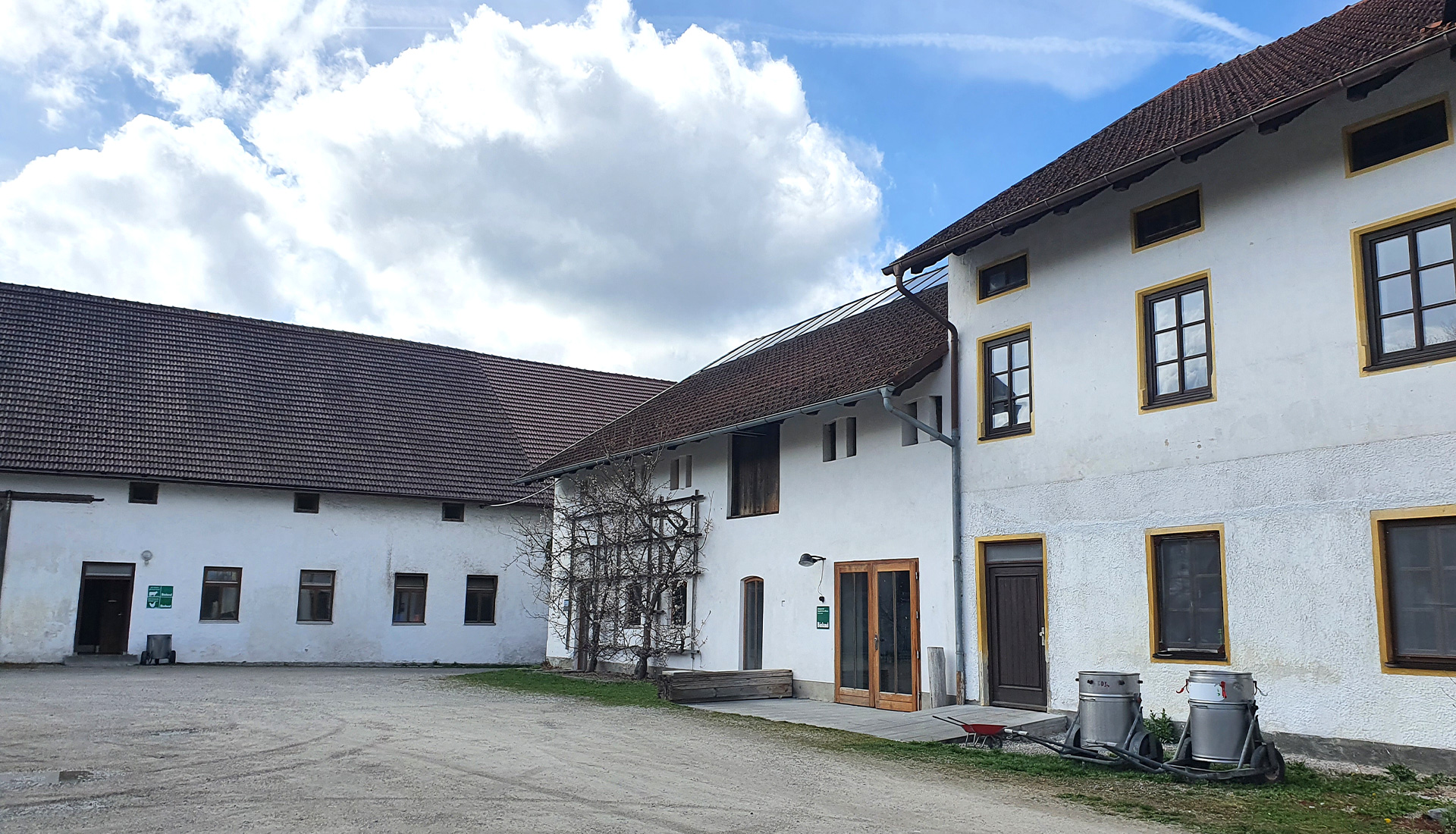 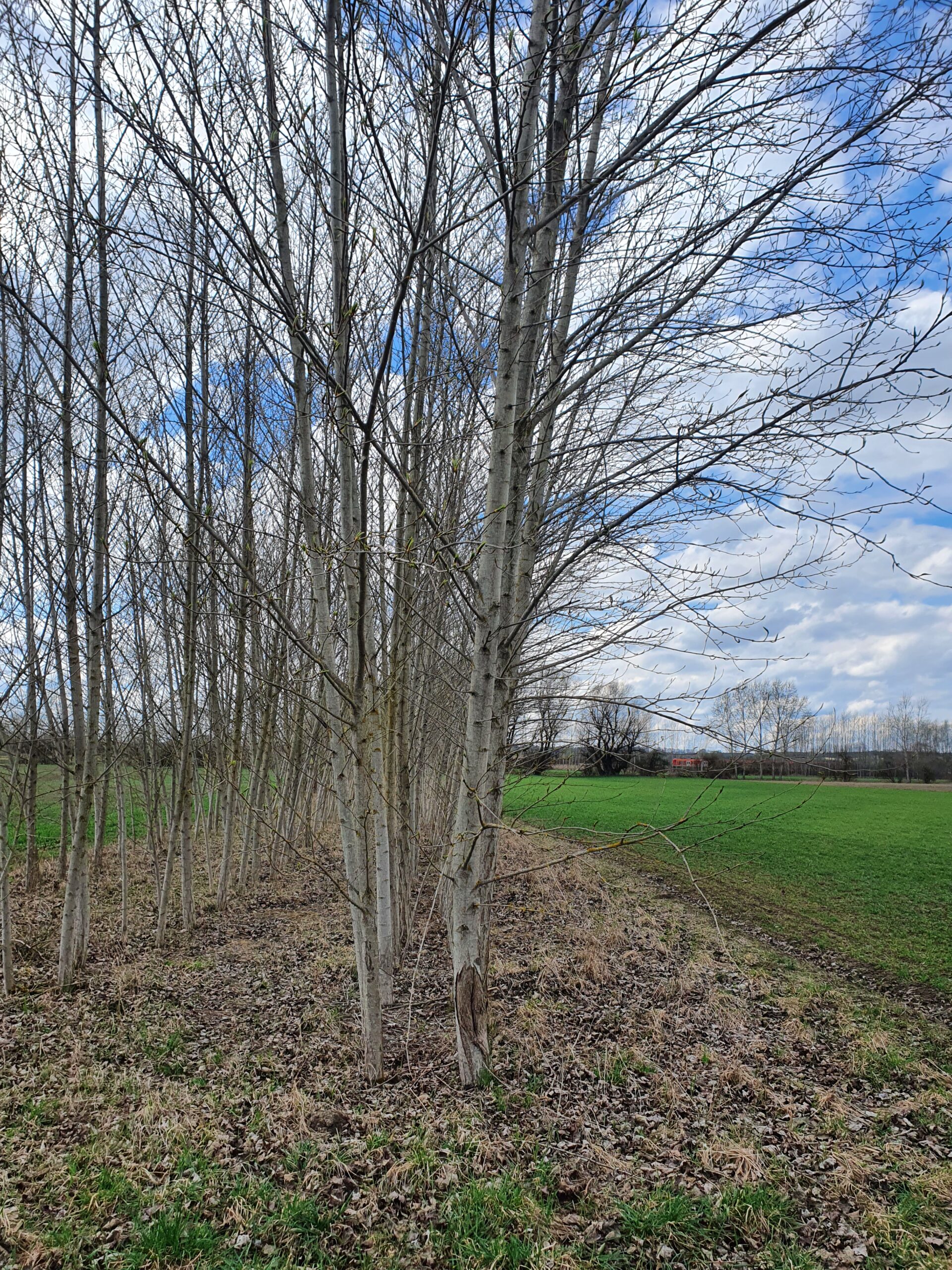 Even the most passionate of lobby­ists wouldn't dream of claiming that biochar alone could save the world. But in inter­ac­tion with other factors, aspects and agents, biochar may well contribute to long-term carbon seques­tra­tion and soil revi­tal­i­sa­tion in the future. ﻿

Disman­tling the envi­ron­mental myths surrounding grass-based British dairy farms has become a passion for one wife and husband team in north Wilt­shire.﻿