Even the most passionate of lobby­ists wouldn’t dream of claiming that biochar alone could save the world. But in inter­ac­tion with other factors, aspects and agents, biochar may well contribute to long-term carbon seques­tra­tion and soil revi­tal­i­sa­tion in the future.

Biochar is produced by the high temper­a­ture carbon­i­sa­tion of mate­rials like wood and cellu­lose residues, turning them into finely divided carbon. It’s a prospect that is currently a source of great inspi­ra­tion – including in agri­cul­ture. For example, this spring, Mathis Block, a milk producer from Schleswig-Holstein, started building a biochar produc­tion facility on his farm in Oster­rade. “If not now, when,” says the 34-year-old about his bold invest­ment of around €1m (£867,310), which he is making together with his brother Steffen.

Although the brothers also consid­ered building a biogas plant, they decided against it in the end; instead, they wanted to try some­thing new. And as it is with new things, many ques­tions still remain unan­swered. Where does the biomass mate­rial come from? Who will buy it or how can it be used on your own farm­land? How is it processed? Further changes in the price of carbon credits will be another impor­tant aspect in deter­mining whether the project will ulti­mately be a commer­cial success. 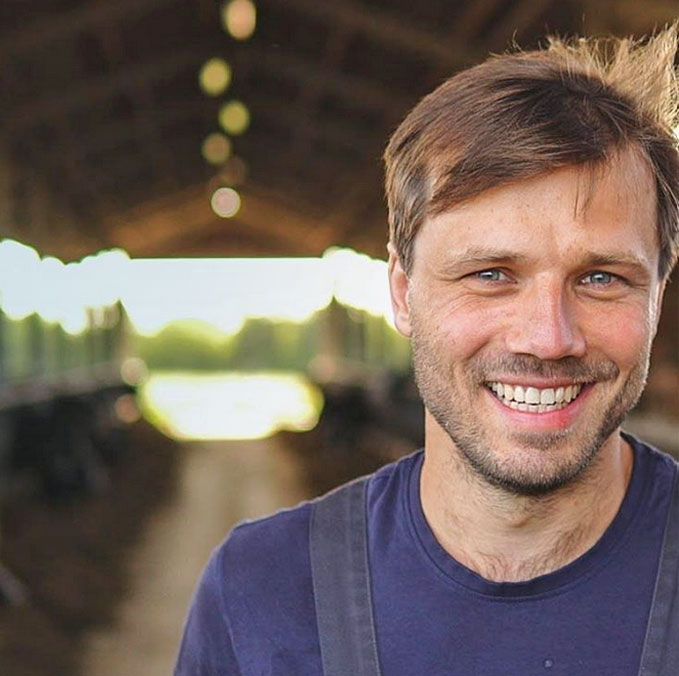 We want to feed the system with wood chips from the region.

As a result of the Paris Climate Agree­ment and the EU’s target to decar­bonise the entire economy by 2050, increasing revenues are beck­oning through the sale of carbon credits. According to the current market defi­n­i­tion, one tonne of biochar captures and stores exactly 3.6t of carbon dioxide.

Carbon certifi­cates are already traded on global plat­forms like the Finnish puro.earth, in which the Nasdaq, the largest elec­tronic stock exchange in the USA, recently joined as the main investor.

Rosy prospects for the produc­tion of biochar

There is no need to look into a crystal ball to see that the Block brothers’ prospects are good overall, perhaps even bright. In fact, the price of carbon credits has doubled within the past 12 months. This is not partic­u­larly surprising, because CO2 tax, ambi­tious climate protec­tion targets and global conflicts have greatly increased pres­sure on the use of fossil fuels, so there are hardly any limits to dreams about upward market trends.

Regard­less of the Euro­pean and global back­drop, however, the thoughts of a farmer like Mr Block do not revolve around the big picture on a daily basis, but first and fore­most around what is happening on his own farm. In fact, the milk producer already uses biochar as a dietary supple­ment for his 300 cows, albeit in small doses. He’s not yet used it on his grass and maize fields, however, although he is certainly consid­ering this as an option in the future.

For the time being, he wants to feed the carbon­i­sa­tion plant, which will soon be on the farm, with wood chips from the region, some of which are currently being shipped to Denmark. “We want to make use of what’s avail­able region­ally,” says Mr Block, empha­sising the impor­tance of local value creation. For him, this is an approach that he can imagine working in other areas, too. Every village equipped with its own decen­tralised biochar produc­tion plant? 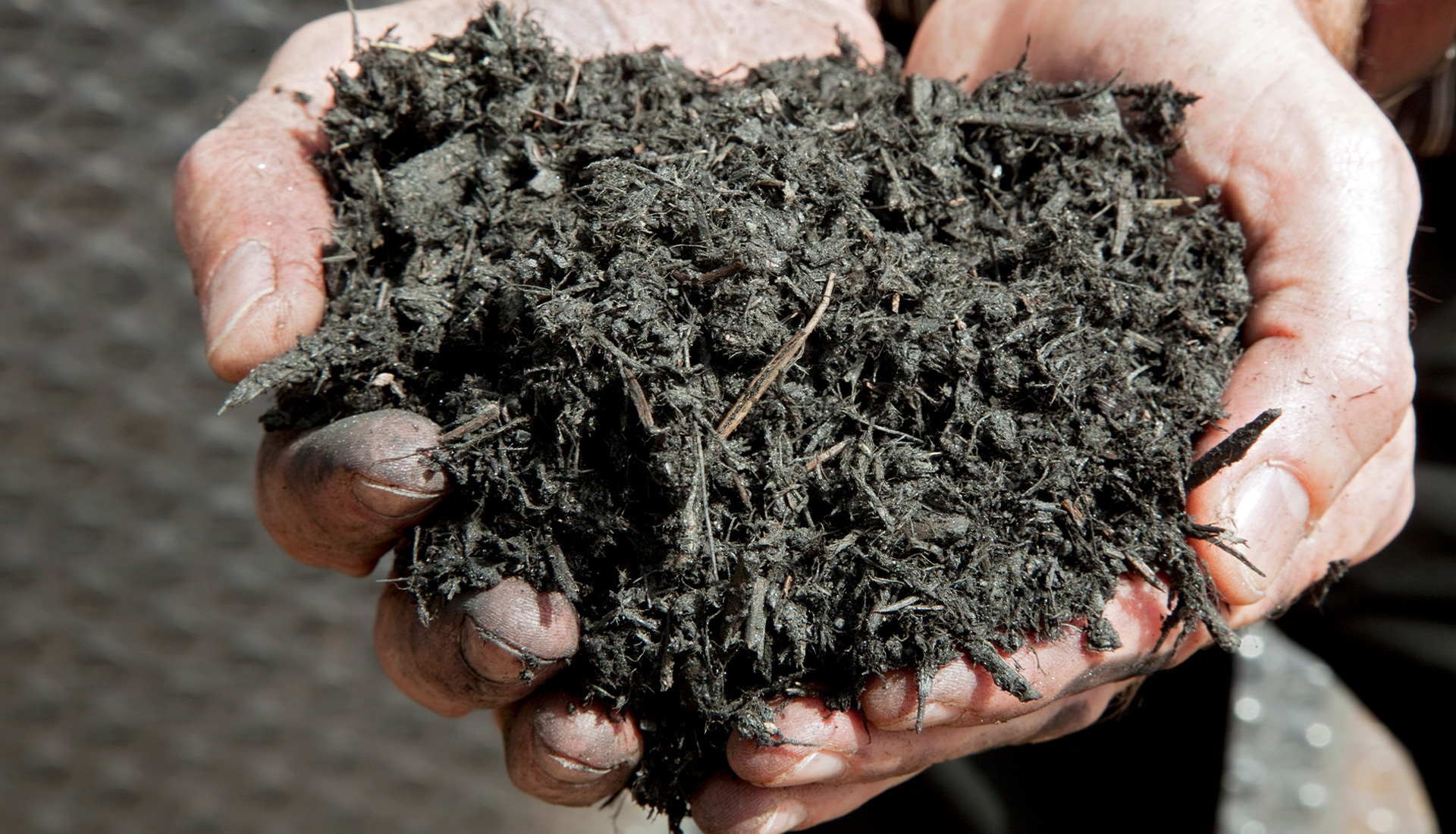 A handful of biomass: Biochar, usually produced as fine coal dust, is mixed with compost, diges­tate, dung or soil to create a fertile soil substrate.

However, many are scep­tical about whether this will always make sense. “We have, in part, left natural cycles behind in agri­cul­ture, so healthy processes no longer take place to their full extent,” notes farmer Thomas Hell­mann. He runs the consulting company “Effek­tive Mikroor­gan­ismen West­küste” (Effec­tive Microor­gan­isms West Coast) on the side, providing biolog­ical tools to beef farmers, pig breeders and biogas plant oper­a­tors.

His vision: The revi­tal­i­sa­tion of ecolog­ical processes in animals, plants and soil. For this purpose, he uses various microor­gan­isms, as well as rock flour and biochar. “For me, biochar is one tool among several,” says Mr Hell­mann. “It has special prop­er­ties that trigger good effects in some cases.” However, he ques­tions whether it makes sense to use biochar as a saviour where the soil biology has been suffering for a long time under years of arable farming. 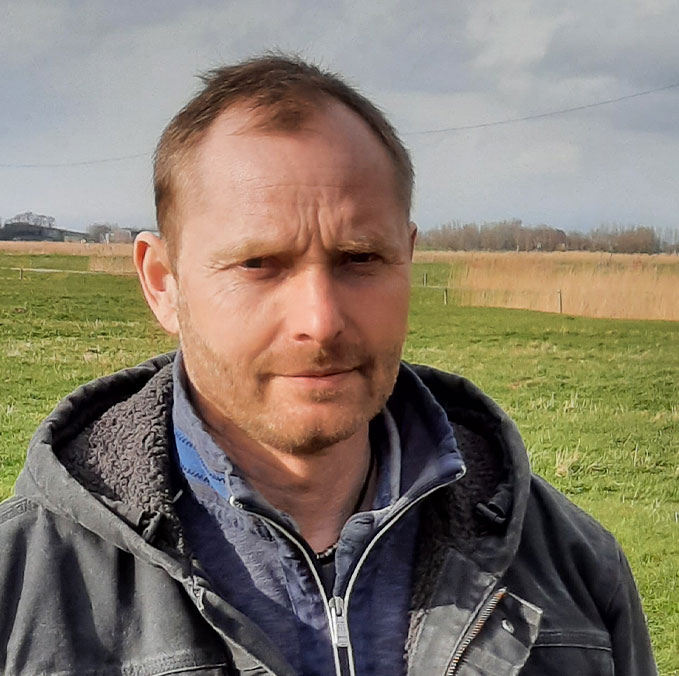 In some cases, in agri­cul­ture we have opted out of natural cycles.

He thinks not. Never­the­less, carbon farming is high on the agenda. In general, this refers to the long-term build-up of humus, and one special aspect is the storage of carbon, e.g., by incor­po­rating biochar into the soil. New networks and initia­tives are forming every­where in Germany and abroad, gaining in impor­tance under the umbrella term of regen­er­a­tive agri­cul­ture. In insider circles, the special prop­er­ties of biochar have been empha­sised for many years, espe­cially its enor­mous ability to capture and store nutri­ents and boost water-holding capacity.

Far-sighted players like those from Hengst­bacherhof in Rhineland-Palati­nate carried out impor­tant pioneering work with the devel­op­ment of their own Terra Preta, a fertile soil mixture of biochar, composts, and other compo­nents, but were hit hard by the reality of “real earth farming.” “The better-known Terra Preta became, the higher the price of suit­able biochar,” admits pioneer Joachim Böttcher. “You need 10-15% by volume of biochar for Terra Preta. In the past, good-quality biochar cost €250/t (£217/t) but today it costs €500 to over €1,000 (£434-867). It’s just too expen­sive.”

In fact, the past decade has seen a whole series of entre­pre­neurial belly flops in the pioneer market, despite media focus on the highly prized effects of Terra Preta, the “black miracle soil” whose origins lie in the Amazon. However, for a long time neither the qual­i­ties of biochar nor the energy balances of carbon­i­sa­tion or pyrol­ysis tech­nolo­gies were partic­u­larly impres­sive. 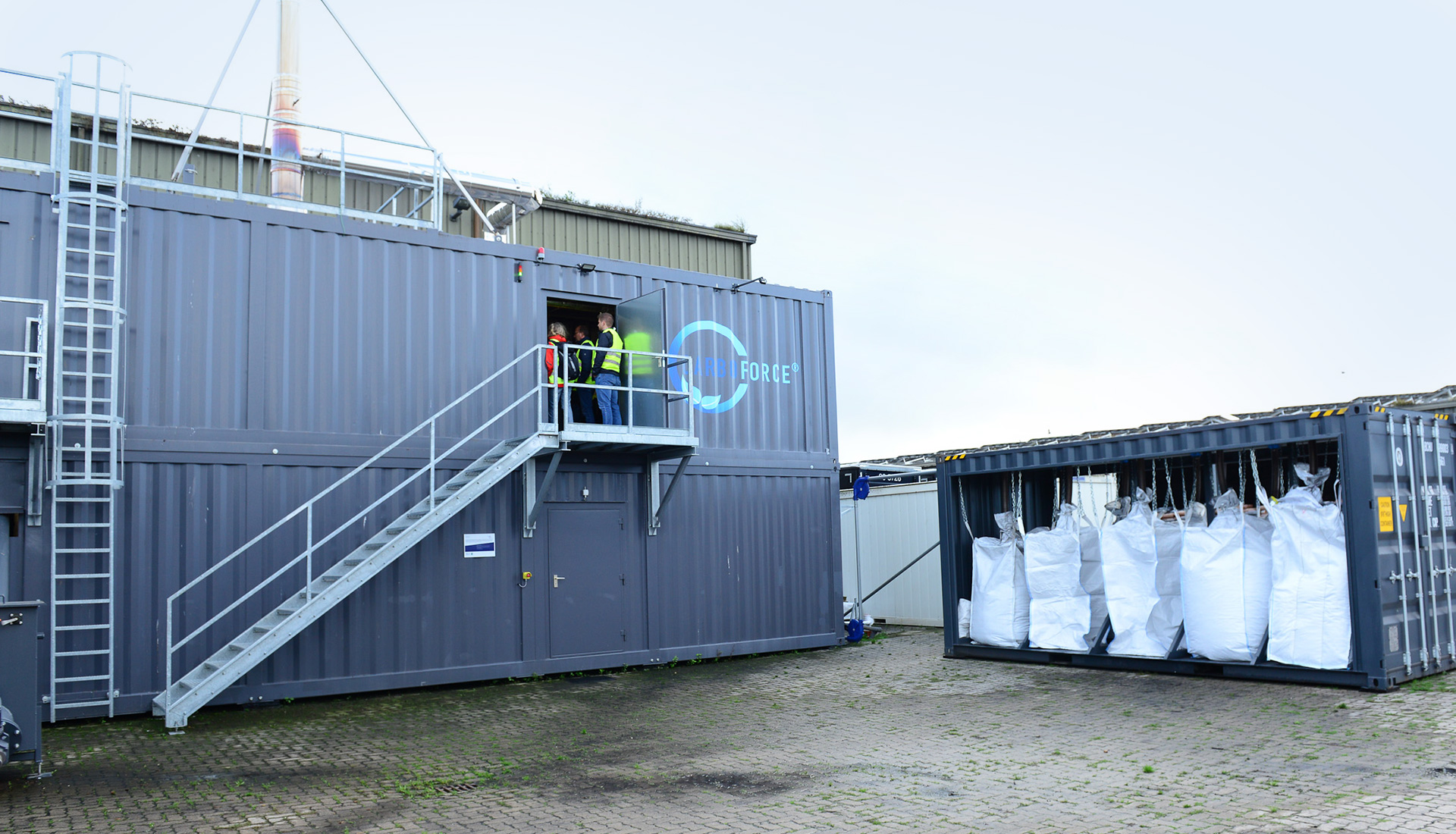 Now, however, these prob­lems seem to have been over­come. “The tech­nology has advanced in leaps and bounds,” says Kai Alberding, CEO of Carbo-Force, which manu­fac­tures char­ring equip­ment. It belongs to the small circle of plant manu­fac­turers in Germany, which also includes BioMaCon GmbH in Rehberg, Lower Saxony, and Carbon Terra GmbH from Augs­burg.

Carbo-Force built its first plant at Abfall­wirtschaft Rends­burg-Eckern­förde GmbH. Since the summer of 2021, the carbon­i­sa­tion plant there has been processing woody waste frac­tions (shredded bent­wood supplied by a local contractor) into fine-grained coal dust, which is then collected in big bags at the end. Demand is higher than supply, the latter being reported at around 750t. The input for this is around 2,400t of woody dry matter. 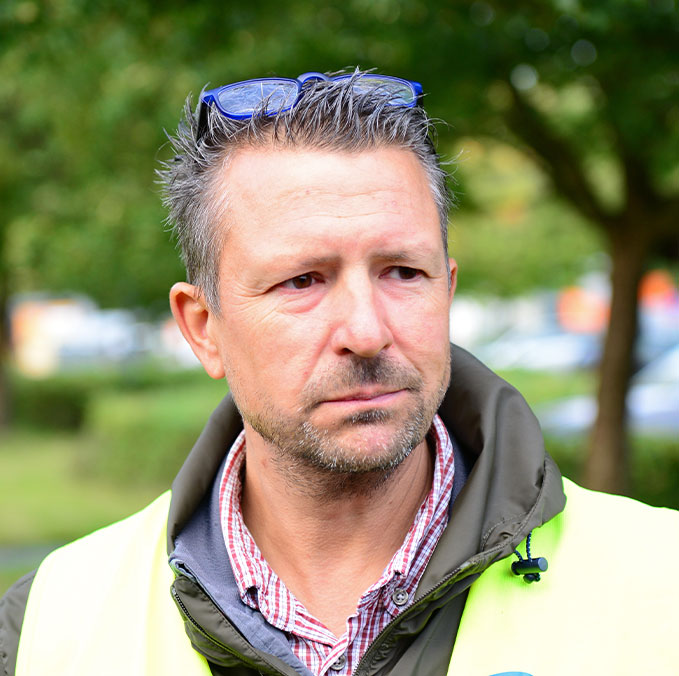 With our tech­nology, we can produce addi­tional energy from residual mate­rials.

The carbon­i­sa­tion plant is housed, rather unspec­tac­u­larly, in a 40-foot container. Anyone who looks inside quickly realises how tech­ni­cally complex char­ring fresh biomass into biochar can be. The process oper­ates at temper­a­tures of 750-800⁰C. “We have accu­mu­lated over 15 years’ expe­ri­ence in the devel­op­ment of inno­v­a­tive carbon­i­sa­tion processes,” explains co-managing director Malte Graf. “Based on conven­tional pyrol­ysis, we have devel­oped a new process with partial oxida­tion, and opti­mised it further for use in prac­tice.

“While the pyrol­ysis processes used so far consume enor­mous amounts of energy through indi­rect heating via heat exchangers, our tech­nology makes it possible to produce addi­tional energy from the residual mate­rials.” In view of the rapid rise in energy costs, this is certainly a growing source of income. However, the largest turnover by far is achieved through the sale of biochar, which is quite liter­ally being snatched out of Carbo-Force GmbH’s hands. 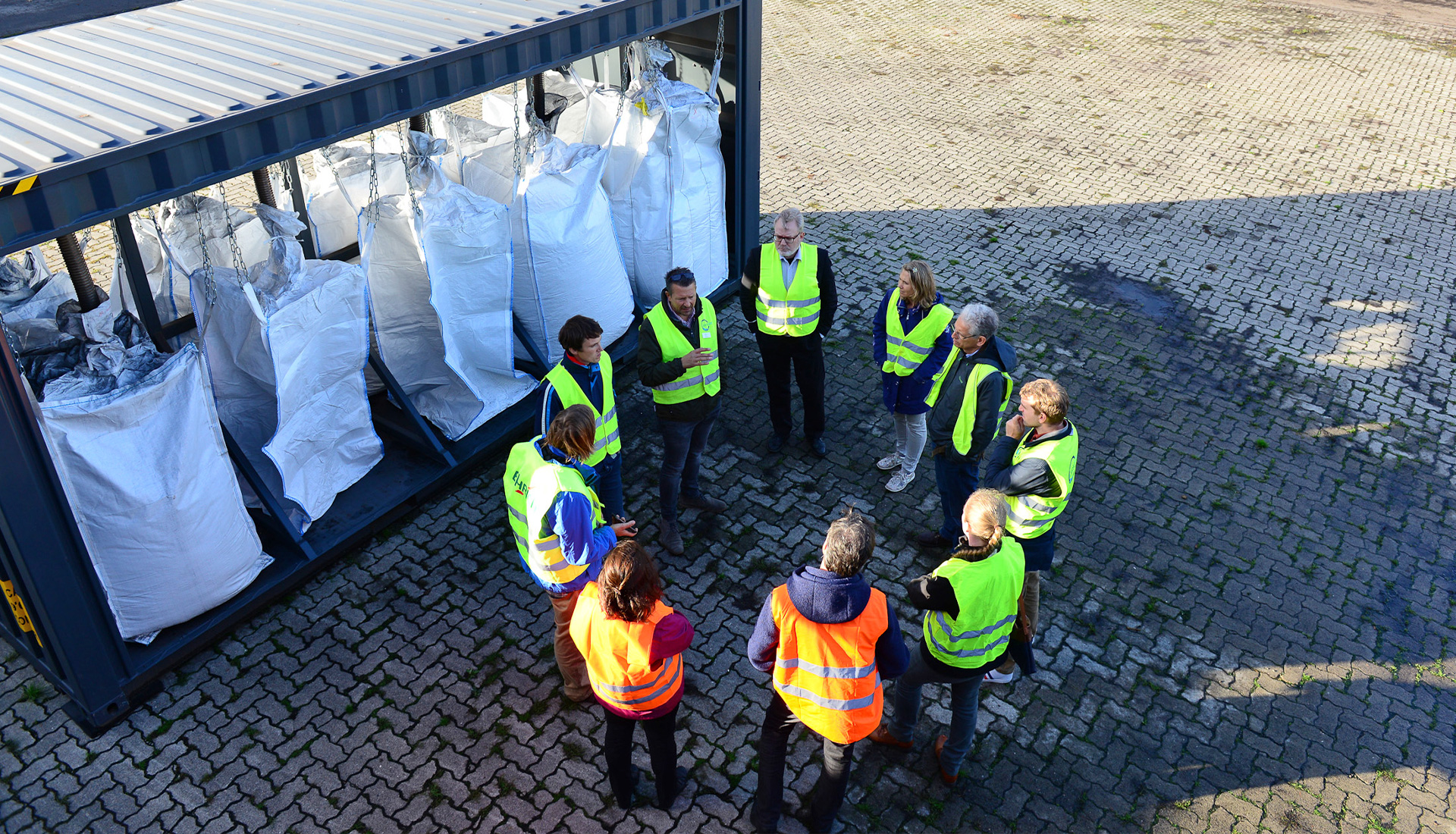 But as is always the case in real life, every­thing has its limits. The euphoria over wide­spread carbon storage may make dollar signs flash before some traders’ eyes, but it is far from enough to win over all agron­o­mists and farmers. Some even warn of coun­ter­pro­duc­tive processes.

Biochar is not a panacea for agri­cul­ture

And, in a letter to the editor of an agri­cul­tural journal, farmer Volker Bosse from Nien­burg (Saale) has metic­u­lously calcu­lated that with a common C:N ratio of 12:1, a signif­i­cant amount of nitrogen would be needed even with an annual humus buildup of 0.1%. There­fore, in his view, given the current fertiliser prices, carbon farming is a not the golden ticket it may appear to be.

That remains to be seen. It is impor­tant to note, however, that the increasing pres­ence of biochar in agri­cul­ture will not be a panacea; and certainly not if polluted biomass frac­tions are charred. Because even biochar is not chem­i­cally stable for eter­nity; at some point, no one really knows exactly when, the carbonised mate­rial can also desta­bilise again, so that pollu­tants could diffuse into the envi­ron­ment. 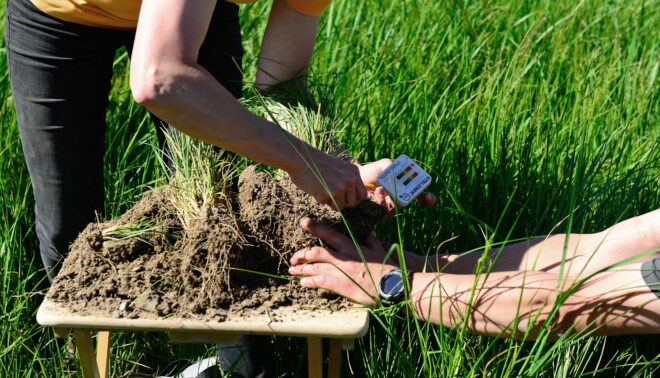 Soil seminar with Dr Sonja Drey­mann on a farm in Northern Germany. 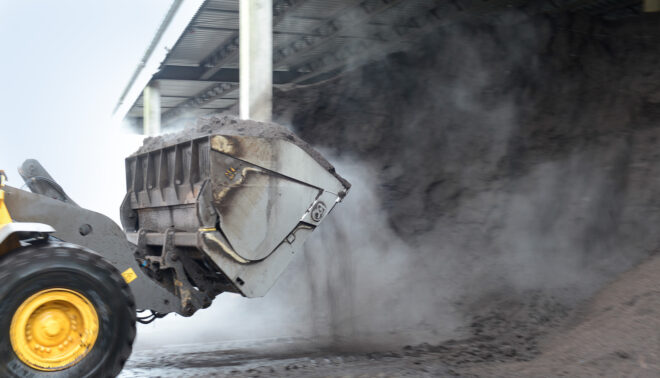 There­fore, caution is advised, but this does not rule out the use of good biochar. On the contrary, the topic is embedded in a world­wide rethinking of how the sensi­tive plan­e­tary skin, our soil, can be tilled in a sustain­able and envi­ron­men­tally protec­tive way. A complex matter that offers no simple answers. Thus, each site requires indi­vidual consid­er­a­tion, as Christoph Thomsen, a member of the board of the Leon­berg-based trade asso­ci­a­tion “Pflanzenkohle”, which was founded in 2017, is well aware.

Mr Thomsen is also project manager of Humus­reich Schleswig-Holstein, which aims to convince farmers of the many bene­fits of adding humus to their soils. “Although there are many recom­men­da­tions on manage­ment methods from existing humus-building initia­tives (espe­cially from Austria), this approach cannot be trans­ferred 1:1 to northern Germany,” says Mr Thomsen, who is trying to build knowl­edge among farmers via various infor­ma­tion events and advo­cates agri­cul­tural climate services. “In the process, we can support farmers who want to get into humus building with climate protec­tion certifi­cates.”

Biochar is usually made from plant residues in the absence of air at temper­a­tures between 380 °C and 1000 °C. It is used as a soil improver and a carrier for fertil­izers, as well as an aid for composting and nutrient fixa­tion of liquid manure. When used as a soil improver it is assumed that biochar has poten­tial to offset carbon dioxide emis­sions. In combi­na­tion with other compo­nents such as bones, fish bones, biomass waste and faeces, biochar is part of the Terra preta. In addi­tion, it is also used as a feed addi­tive and dietary supple­ment.

For British farming to reach net zero by 2040 more carbon needs to be captured: But the topic of carbon seques­tra­tion has become too high level and farmers need to bring it back down to earth – quite liter­ally. ﻿

Digi­tal­i­sa­tion is crucial for agri­cul­ture and its sustain­ability ambi­tions, according to Stefan Stahlmecke, regional director of intel­li­gent solu­tions at John Deere, speaking at the Digital Farming Confer­ence in Berlin. But what does this mean for farmers? We ques­tioned him to find out more.﻿