Albanian agri­cul­ture has plenty of chal­lenges, but the sector still has great poten­tial. It is one of the largest producers in the world of medi­c­inal and spice plants. But while many farmers are hoping that the country joins the EU, if and when that will happen is still uncer­tain.

Ilir Gjolaj is squinting as he surveys his fields in north-western Albania. A tractor is ploughing through the stony ground, throwing up a trail of dust as high as a house behind it. In the distance, Lake Skadar glit­ters in the sun in front of the bare moun­tains of Montenegro. “Unfor­tu­nately we barely had any rain this year,” says the 40-year-old. With his part­ners from the company Agro-Map, he is growing sage, lavender, corn­flowers and various other medi­c­inal and spice plants. Yields are normally 2-4t/ha. This year they aver­aged just 1.5t/ha.

But despite that, Mr Gjolaj has done well. He bought his first hectare here in Koplik 13 years ago. For €200 (£178). Since then his family has come to own 30ha. “Every­body thought I was crazy then, because I was putting my money into a pile of stones, nobody wanted to go into farming.” Mr Gjolaj chuckles: “Now many people want their land back.” 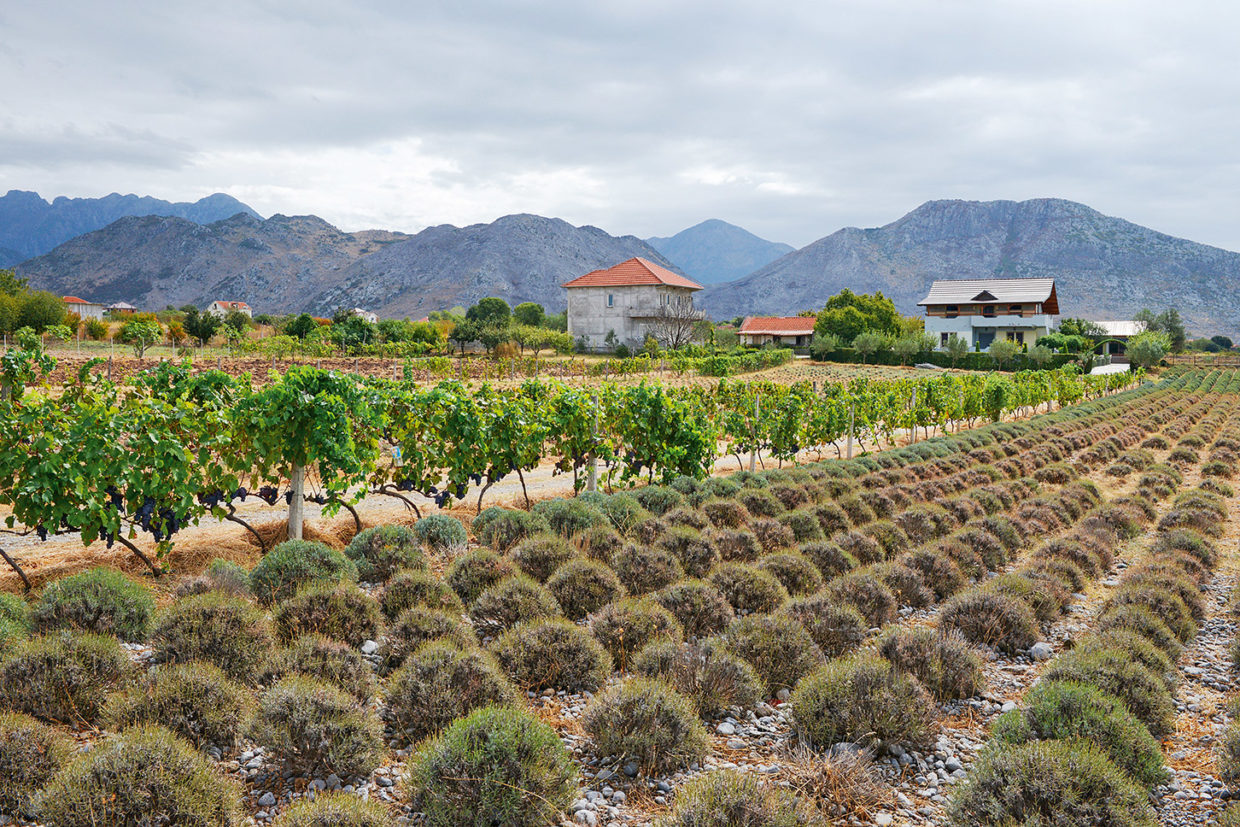 More and more farmers are growing medi­c­inal and spice plants, instead of collecting the plants in the wild. 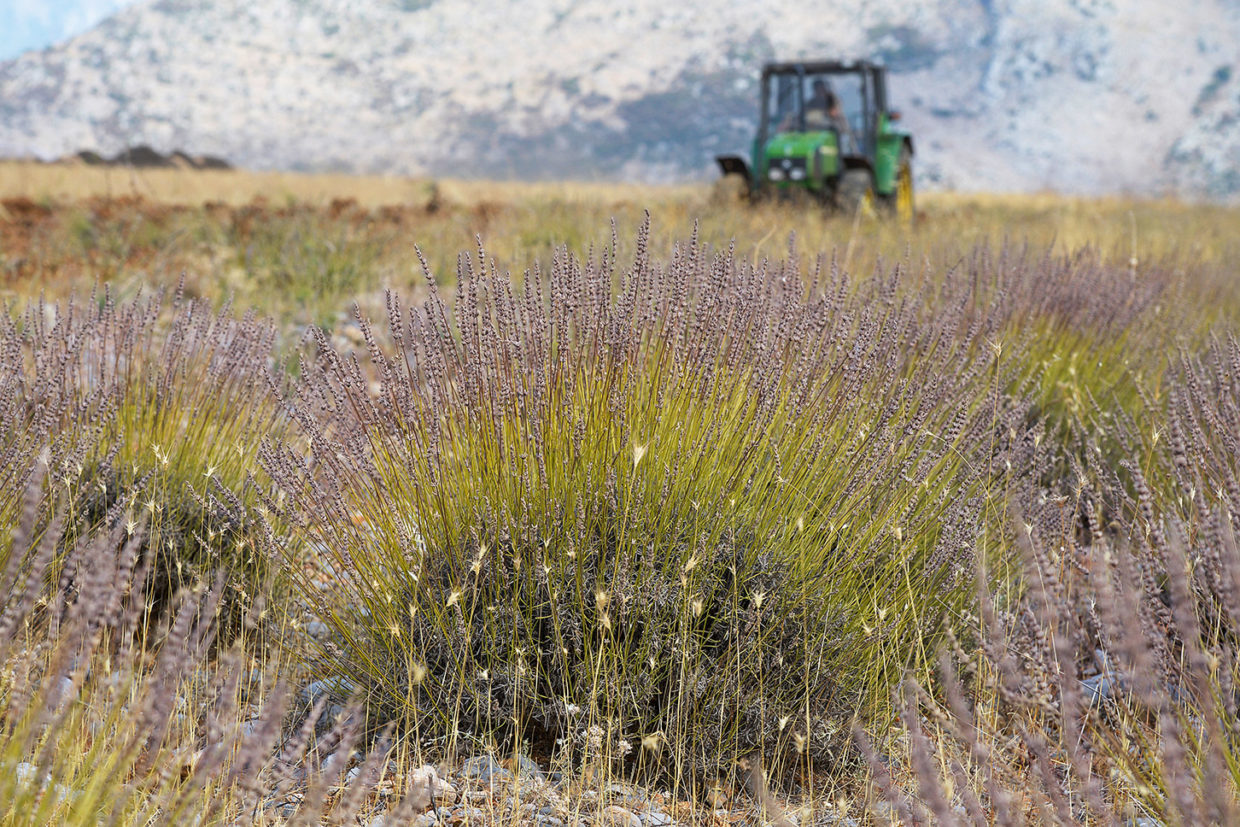 Lavender is mainly used in the cosmetics industry. 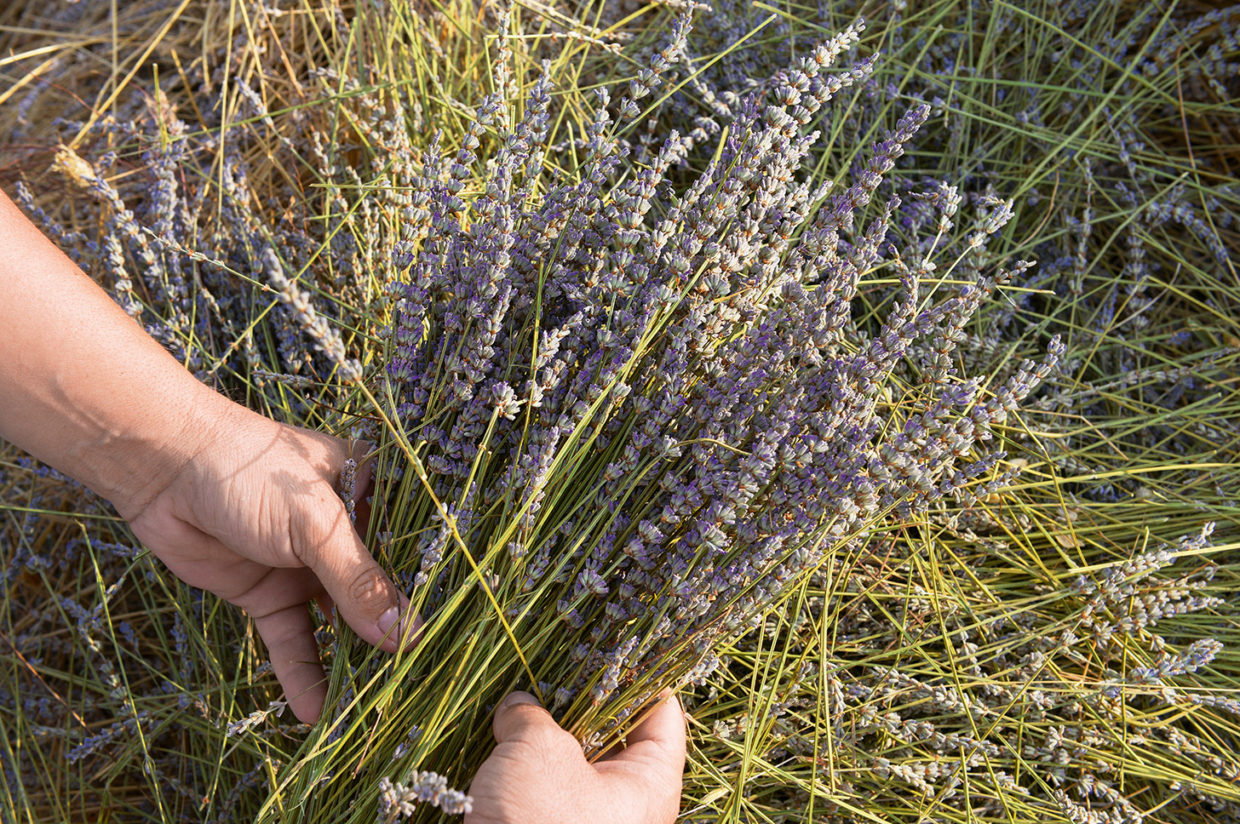 In addi­tion to the harvested crop yield, the level of essen­tial ingre­di­ents is impor­tant. 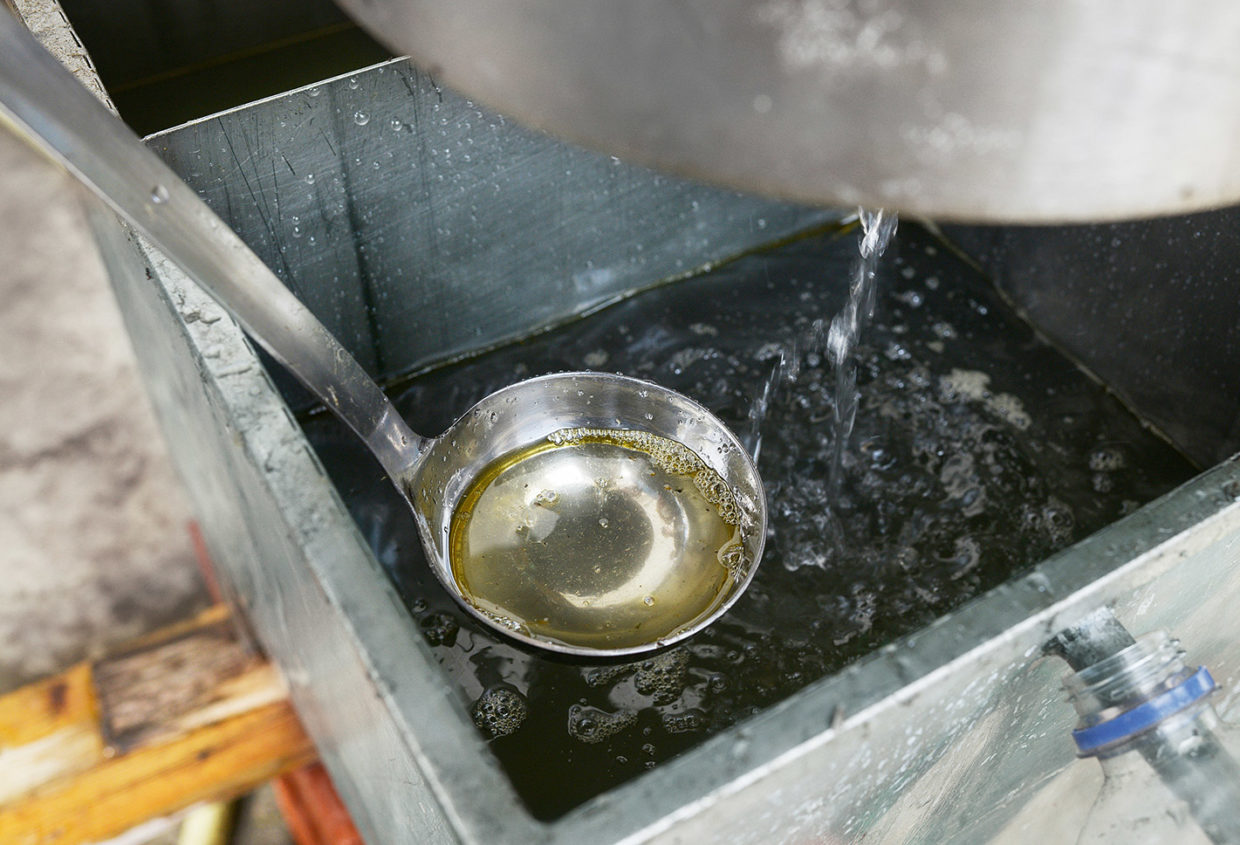 After distilling, there is only a little oil left, so the quality is even more impor­tant. 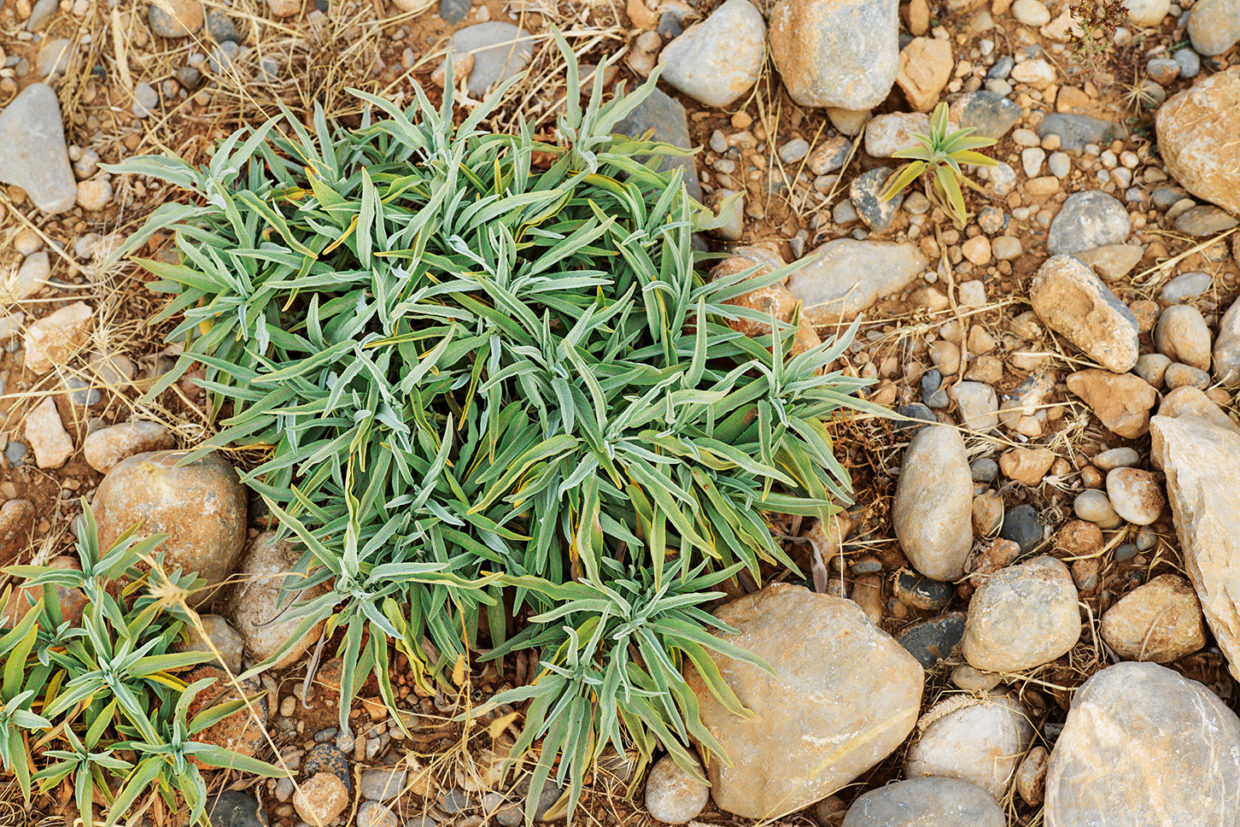 Market-orien­tated agri­cul­ture has not existed in Albania for long. The fall of the Iron Curtain coin­cided with the fall of the commu­nist regime here. However, there was then a long period of polit­ical insta­bility. The Albanian parlia­ment only managed to pass land reform in 2006. Each person received about 0.4ha, so a family of six would get 2.4ha. Haggling on a huge scale began. Land was exchanged, sold, and awarded with hand­shakes as well as with under­hand tactics. There were, and even today are barely any land titles.

Every­body thought I was crazy then, because I was putting my money into a pile of stones.

The hold­ings are small, with an average size of just 1.2ha, and of the 300,000 hold­ings in the country, only a fifth operate commer­cially. Because half of the popu­la­tion of Albania lives abroad, many owners don’t use their land, so a quarter of the arable acreage lies fallow.

The trea­sure of the Albanian economy lies in the moun­tains: Wild herbs.

A lot of poten­tial

For Mr Gjolaj, success didn’t just fall in his lap. Initially, he tried to make it abroad, working in Italy and starting a small retail busi­ness. Then he returned. “One second on the field connected me straight away with the centuries-old roots of my family, who always worked the land here.”

Medi­c­inal and spice plants have a tradi­tion in the Koplik region as they suit the chalky ground, since the abun­dance of stones store heat. The plants contain a lot of useful substances, and Albania is one of the largest producers of these plants in the world. Wild harvesting provides a great deal, and Albania has many different species that can only be found here or in very few other coun­tries. Harvesting sage, juniper berries, thyme or lemon balm offers people in the outlying regions a good seasonal income. But over the past 10 years, the plants have also increas­ingly been culti­vated.

Because of high demand, there has been a boom. In the region of Koplik, the area of sage and lavender alone is now thought to have grown to 4,500ha. With labour costs of €7-10 (£6-9) a day, Albania is very compet­i­tive, since culti­vating medi­c­inal and spice plants requires a lot of manual work. The saplings must be planted by hand, and then weeds need to be removed regu­larly, because the plants only grow slowly. They are also harvested by hand. 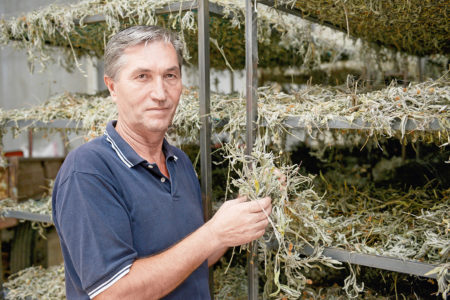 Xheladin Zekaj inspects lavender and sage plants in a storage and drying hall which he shares with other producers.

Even during the period of commu­nism, medi­c­inal and spice plants were culti­vated in the region and exported. “At that time this took place on a maximum of 2,000ha,” says Agro-Map producer Xheladin Zekaj. “Corn, tobacco and wheat were grown on the rest of the acreage. The 58-year-old is standing not far from the area under cultivation by Agro-Map in a barn that he uses together with other farmers for storage and drying.

In total they culti­vate sage and lavender on 150ha. Plants are laid on shelves to dry. Sacks are all around, filled to over­flowing with lavender, shim­mering with purple. It smells like a beauty store. “When I started farming in 2006, there were very few of us,” the trained agri­cul­tural econ­o­mist remem­bers. He was active for a long time in the district’s public admin­is­tra­tion. Back then, a tonne of dried lavender with stems would sell for US $3,500 (£2,685), and sage for $1,800 (£1,381). “Today we don’t even get half that.”

When I started farming in 2006, there were very few of us.

The large supply forced prices down. To add to that, further processing isn’t always up to stan­dard and imported plant matter is being used. Farmers used to pick their cuttings from the best wild plants in the moun­tains. But increas­ingly they have been using vari­eties imported from France or Bulgaria. “They may grow faster, but they contain fewer ingre­di­ents and are more suscep­tible to drought than the local vari­eties,” says farmer Agim Rama, who grows spice and medi­c­inal plants in the region. However, he is committed above all to obtaining and devel­oping local vari­eties. In recent years he has bred his own variety of sage from these local vari­eties.

However, that is not going to solve one major problem for growers of spice and medi­c­inal plants: Just a few exporters and proces­sors control the market. That is why Mr Gjolaj took the bull by the horns 10 years ago and invested in his own distilling machine, which was initially a second-hand Soviet model. Now, with his two part­ners from Agro-Map, he has acquired a new one. 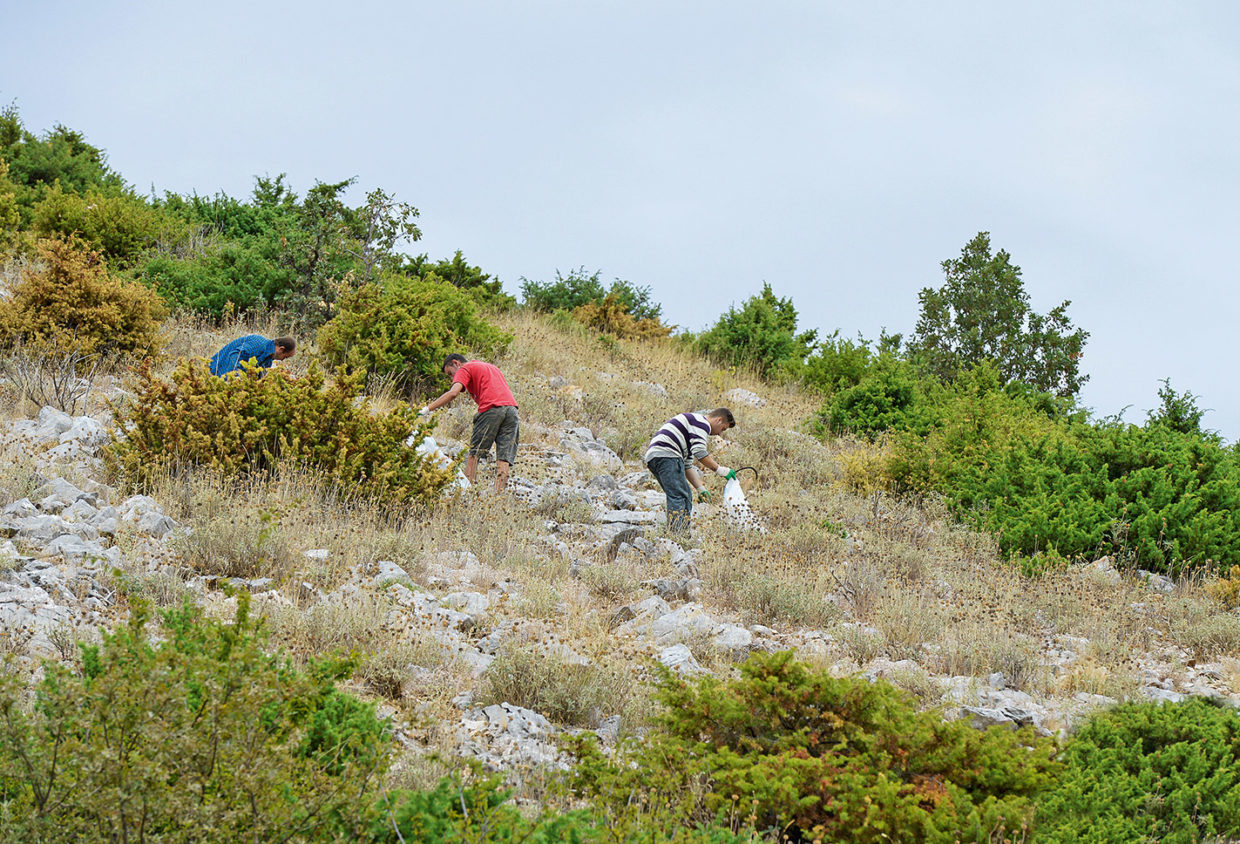 Collecting wild herbs in the moun­tains at Berat. 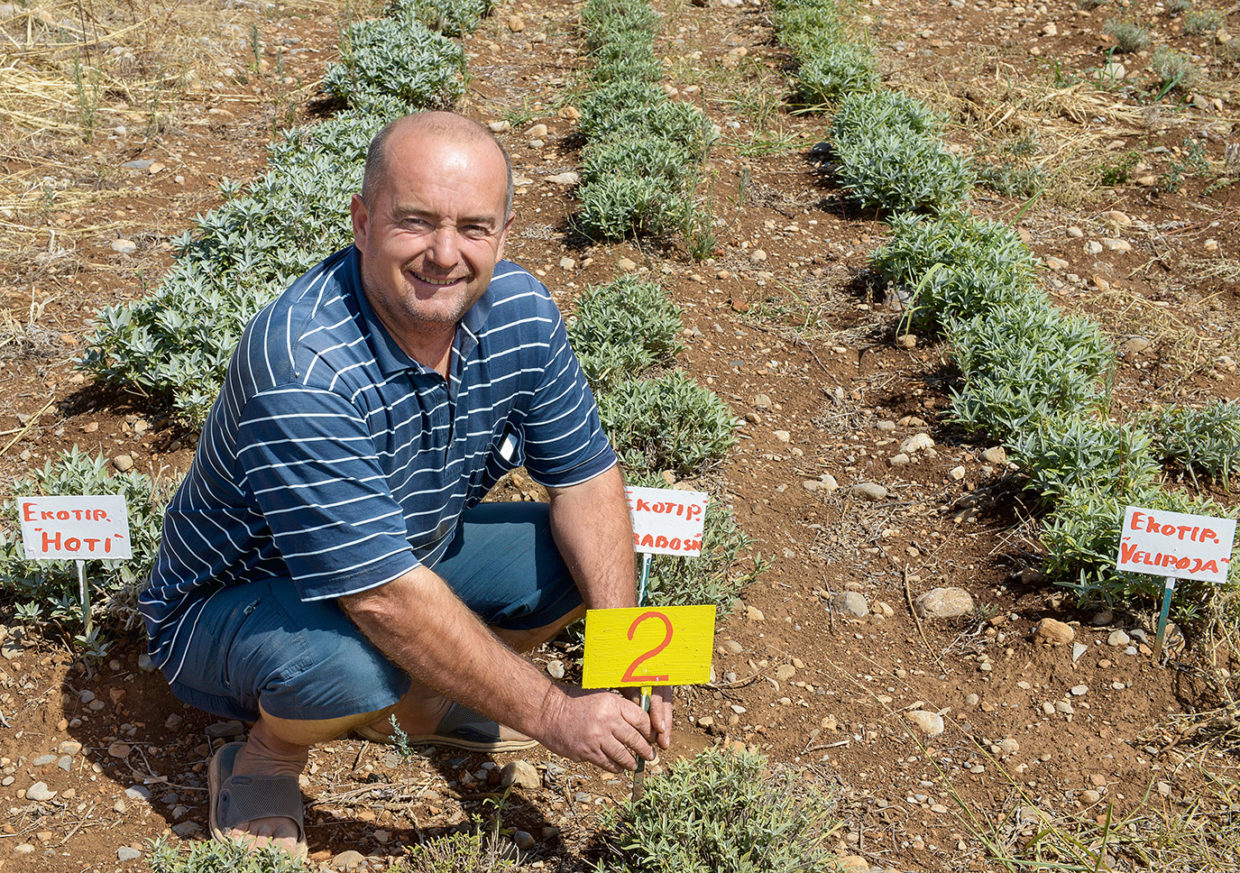 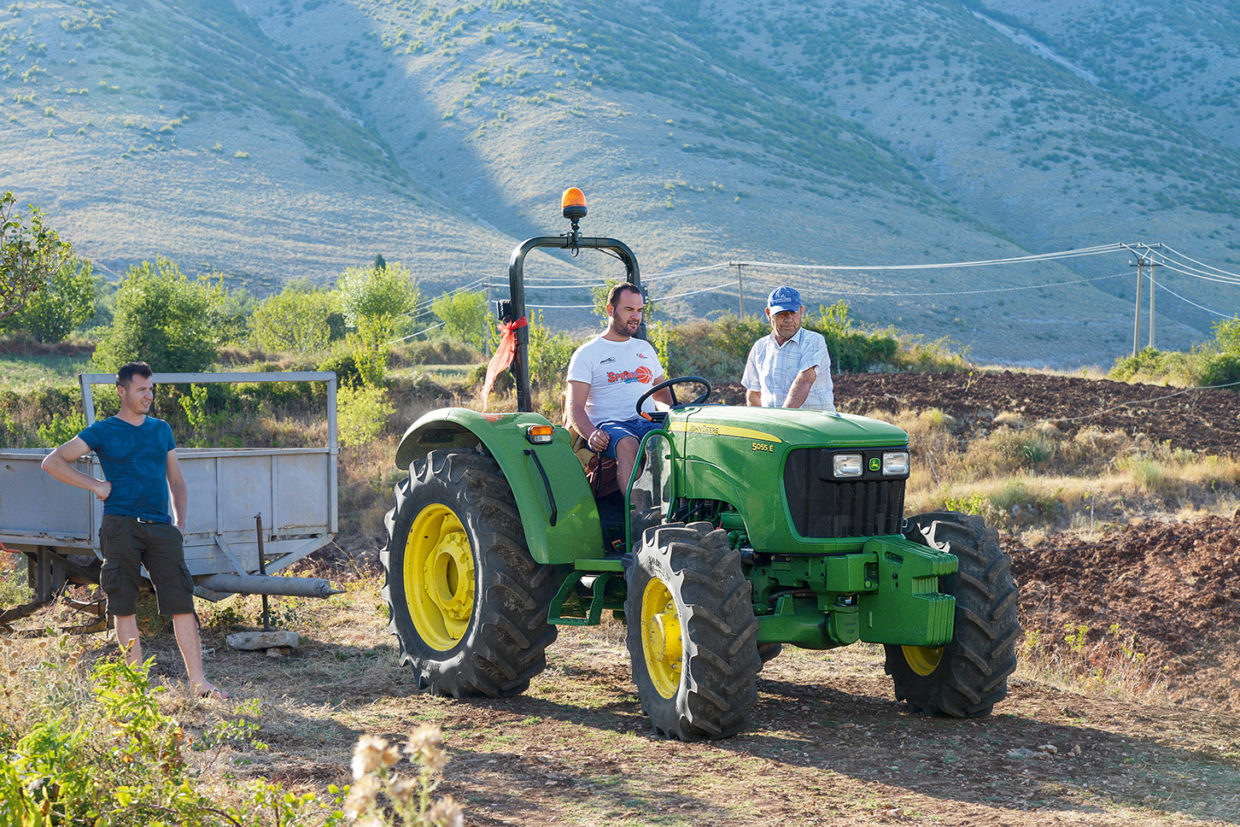 With the help of a new tractor, the Metka family want to increase their culti­vated acreage. 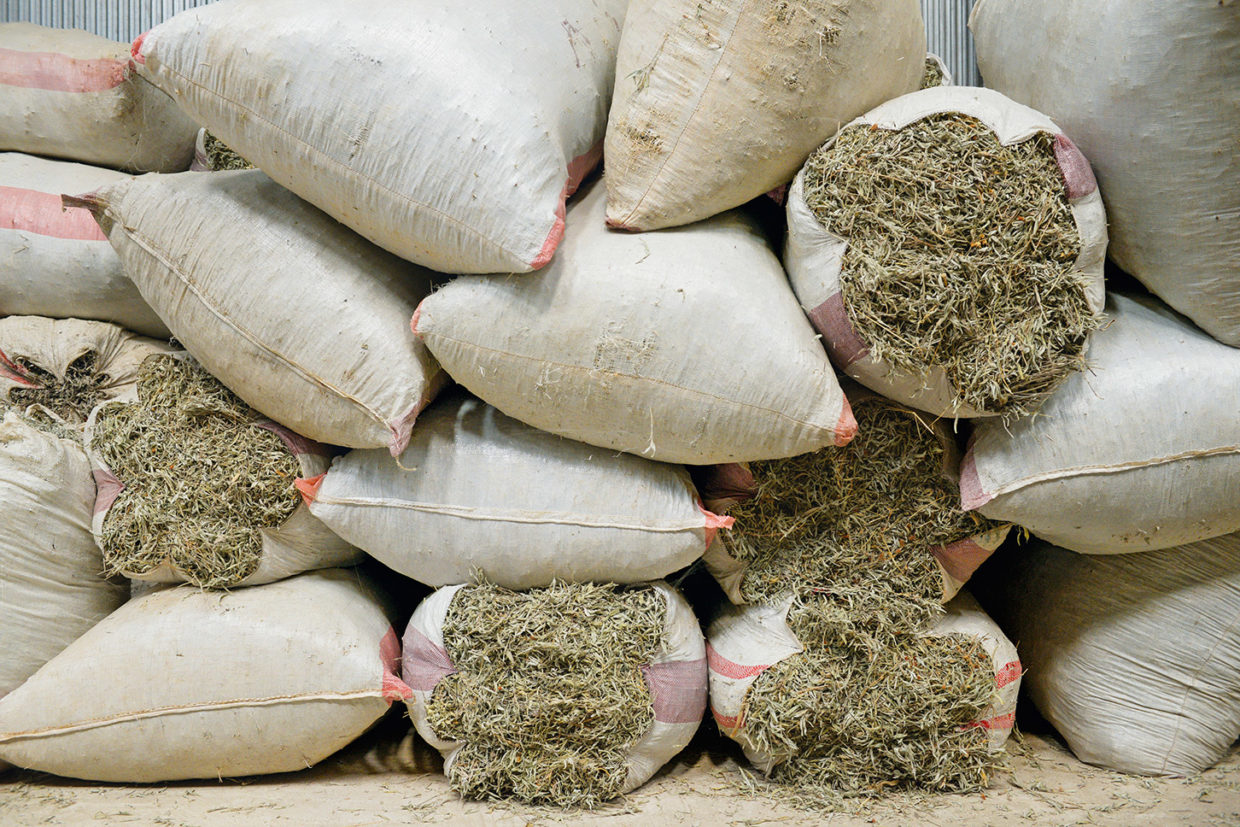 Storage with a fragrance. Albania is one of the largest sage producers in the world. 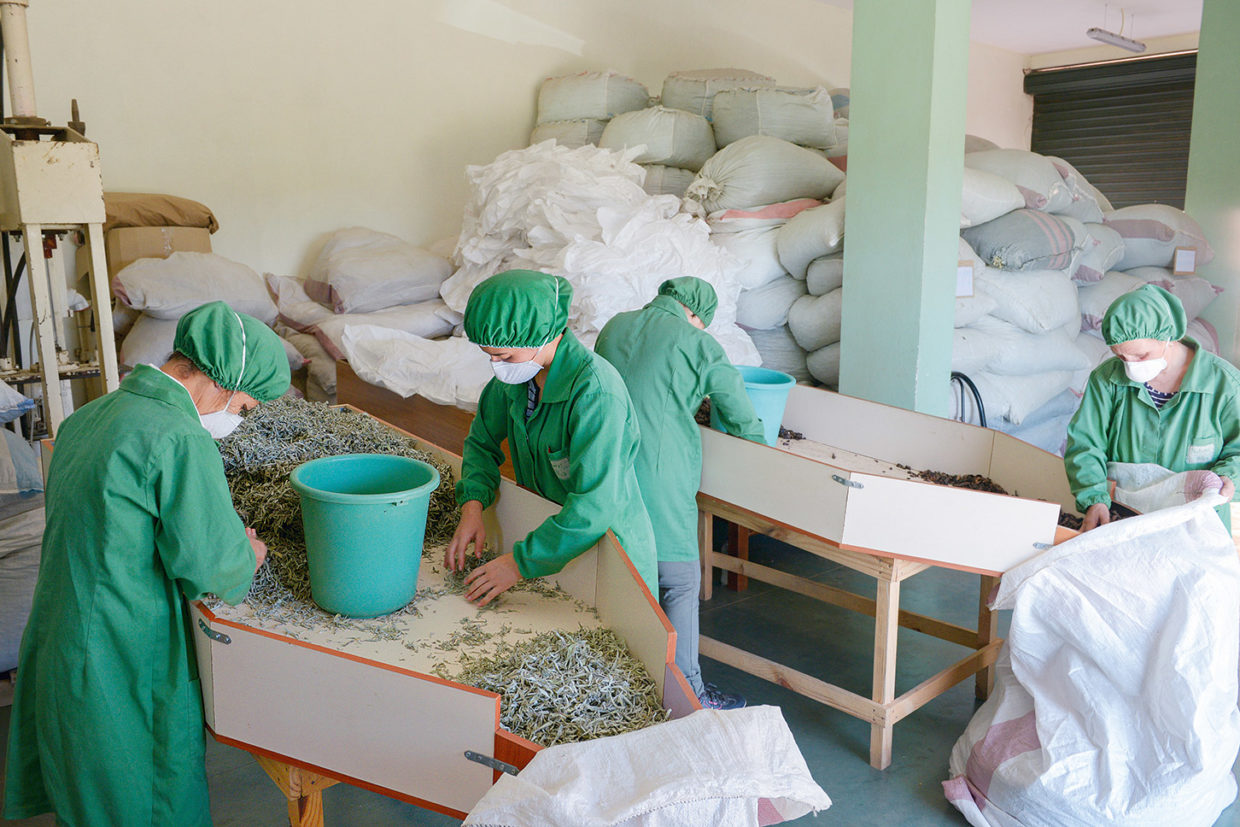 It runs with a quiet whisper in a draughty hall – a delib­erate choice so that the employees don’t breathe in too many vapours. “The new machine gets the entire oil content out of the plants, the old one didn’t even manage half.” The yield is low though, with the oil drip­ping into a plastic bottle that hangs from the machine’s huge hopper.

A tonne of Helichrysum produces just 1.5 to 2 litres of oil, and lavender produces 6-10 litres. So how can that pay off? With prices of up to €1,500/litre (£1,335/litre). That is how much cosmetics compa­nies or phar­ma­ceu­tical producers pay for these concen­trates – if they are of good quality. Agro-Map has invested in that quality. The young company could not rely on any help from the state or banks for this. It had to raise all the invest­ments by itself, so profits are imme­di­ately rein­vested. “Luckily the demand for high-quality oils is very good,” explains Shkelqim Karaj, one of the two other Agro-Map part­ners. He studied agri­cul­tural sciences in Tirana and at the Univer­sity of Hohen­heim, Germany, where he now teaches. 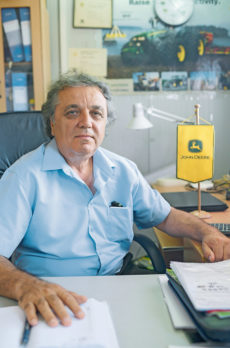 John Deere dealer Xhorxhi Marku is convinced that all Albanian farmers would profit from a Euro­pean member­ship.

Albania has been a candi­date to join the Euro­pean Union since 2014, and Mr Gjolaj and Mr Karaj would welcome its member­ship. Exporting their prod­ucts, for which they already have to meet EU stan­dards, would become much simpler. There would be supportive invest­ments, subsi­dies and struc­tural support for agri­cul­ture. They also hope that all producers would then have to work to the same condi­tions. “All of our almost 40 employees are offi­cially regis­tered, but we have to compete with hold­ings that pay no taxes on their workers what­so­ever,” says Mr Karaj.

Many farmers and food compa­nies in Albania see the situ­a­tion simi­larly, whether they are dairy farmers, dairy proces­sors, beekeepers, or fruit and vegetable growers. They are not worried about compe­ti­tion with low-priced prod­ucts from abroad. That has been here for a long time already. Since Albania joined the WTO, Albanian producers have had to contend with goods from Greece, Italy, Mace­donia and Serbia; all coun­tries with highly subsidised agri­cul­ture. But in Albania not even the fuel for farmers has become cheaper. Even the many small­hold­ings are hoping for better support, although it will be partic­u­larly hard for them to meet EU stan­dards.

Joining the EU would open up new prospects, including for mech­a­ni­sa­tion.

Xhorxhi Marku also has great expec­ta­tions for joining the EU. For many years he has been running an agri­cul­tural machinery busi­ness in Tirana with his son, where they sell John Deere trac­tors. The office is located on the road to the airport, with a work­shop building and spare parts ware­house nearby. However, the only evidence of the planned new company building so far is the foun­da­tions, as construc­tion was blocked by the author­i­ties for no clear reason.

Albania is placed 83rd on Tran­parency International’s Corrup­tion Percep­tions Index. But Mr Marku is unde­terred. “We have good land and a climate that allows us to harvest fruit and vegeta­bles throughout most of the year. Joining the EU would open up new prospects, including for mech­a­ni­sa­tion.” Mr Marku is already bene­fit­ting from Albania’s status as a candi­date country. A program by the Danish and German govern­ments to modernise the Albanian agri­cul­tural sector is providing farmers with invest­ment aids and credit for trac­tors. Some of them are his customers.

The dealer takes us to meet Agim Metka’s family, who work a farm of almost 6ha in the moun­tains of the southern Berat district. The journey there goes past cherry plan­ta­tions and small corn fields. It’s not rare to see farmers working with sickles and piling the corn on donkeys’ backs. It has only been a few months since Mr Metka and his three sons started working with a new John Deere 5055 E. The first big job that they used it for was in the extremely dry summer. “We were able to water the fields and as a result save the harvest,” explains Mr Metka’s 30-year-old son Engiell. Right now they are ploughing one of the fields to sow cereals. “We don’t have to wait for the contractor any more and with that we also save on costs.”

Soon the family wants to lease an addi­tional 10ha. “Then hope­fully my sons won’t need to work as harvest workers in Greece any more,” says the father, raising a glass of fruit schnapps that they have distilled them­selves. You have to try one. To hospi­tality. And to the future. 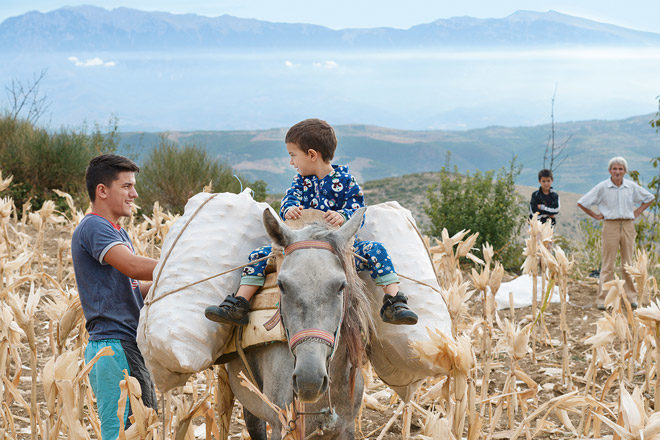