Precision Farming“Fertiliser should ideally be 100% effec­tive.”

Agri­cul­tural contractor AIS Schier has been focusing on core fertiliser and lime appli­ca­tions for many years. General manager Holger Schier describes how they even out the pH value of a field and why this approach is a good starting point for preci­sion agri­cul­ture.

Mr Schier, you have been working in preci­sion liming for 15 years. Is a highly vari­able pH typical for new customers?

There is always vari­ability but it doesn’t always present in the same way. It can be towards a lower or a higher range, so from 4.5 to 5.5 or, for example, 5.3 to 6.5. But the gap can be much wider – even from 5 to 7. The starting points can be very different.

What factors lead to this vari­ability?

The causes are the same as those which contribute to vari­able soil struc­ture, nutrient avail­ability and yield. On the one hand, the cause may lie in the history of the land. Parts of the field may have been culti­vated differ­ently. For example, some farmers may have used lime in the past where neigh­bors didn’t, and these fields have since been merged.

Another factor is the topog­raphy of the land. Nutri­ents accu­mu­late in the dips and there will also be incon­sis­tent water holding capac­i­ties across the field. In some areas this leads to greater yields and higher nutrient with­drawals which, in turn, increase the natural decline in the pH value due to the loss of basic cations. 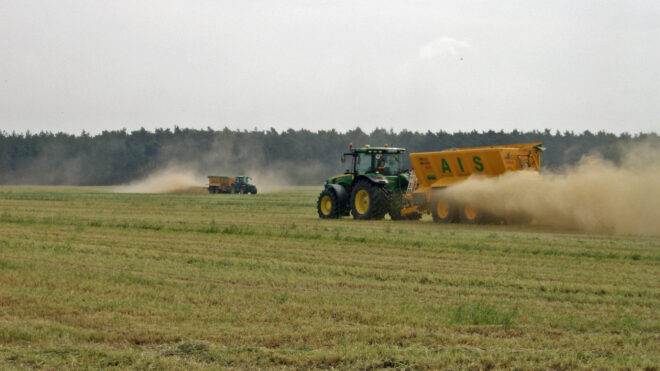 Holger Schier and the Streumaster company have worked for a long time on opti­mising the site-specific liming tech­nique.

If we assume that the average pH value is not too far out and that the vari­ability isn’t too great, is it still worth investing in preci­sion liming?

Let’s use a vari­ability of between 5.5 and 6.5 as an example. Here, I would look to average about 4.5t/ha of lime if I spread consis­tently and calcu­lated all pH values as an average. However, if I look closely, I will see that where the pH is 5.5 I need to spread 8t/ha, and where it is 6.5, 2t/ha would be required. The vari­a­tion in the amount of lime needed then becomes clearer.

If I spread 4.5t/ha across the whole field, I wouldn’t be able to opti­mise the pH in the areas that need a lot of lime. And I would be adding lime to areas where the pH value is already good. So preci­sion appli­ca­tion makes sense. Based solely on the quan­tity of lime, the costs are the same. It’s only the appli­ca­tion map that makes a price differ­ence and then we are talking about €1.50/ha.

When do you class the pH value as uniform and how long does it take to get there?

It can take between five and six years, because we can’t change the pH value too abruptly. If a field has a value of between 5.8 and 6.5, we spread between 1.5 and 5t/ha, for example. After two or three years we will be seeing a more uniform result, possibly between 6.0 and 6.5pH. After another couple of years we will be getting closer to constant values.

That said, we also have farms which reached an optimal range five to six years ago but now see dispar­i­ties, some­times between 6.1 and 6.5. However, there is only a differ­ence of 1.5-3t/ha in the quan­tity of lime applied. 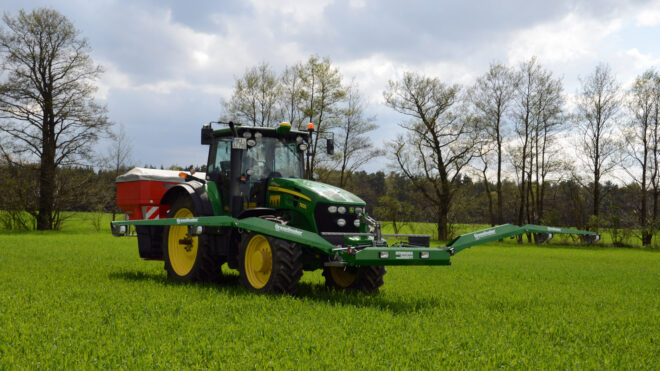 The contractor concen­trates on nutrient supply and soil improve­ment: lime and base fertil­i­sa­tion, appli­ca­tion of manure, and for a few years site-specific N fertil­i­sa­tion.

So you can’t just stan­dardise the pH and then go back to fixed appli­ca­tion rates?

It does some­times happen that a field reaches a really constant pH value. But this is very diffi­cult to main­tain over a long period because lots of factors work together. Leaching and yields are not the same in every spot and with those come a corre­sponding loss of nutri­ents.

The next point is organic fertiliser, partic­u­larly slurry. Even if applied by a contractor, it does not mean that every area receives the same amount of nutri­ents unless you are working with an NIR sensor. When you look at the values from these sensors the differ­ences seen within slurry are crazy; some­times 50% vari­a­tion. This means we always need to adapt lime appli­ca­tions to the circum­stances.

You are assuming that no other fertiliser is applied site specif­i­cally; this would be another way of balancing the soil para­me­ters. So why rely on preci­sion liming instead of preci­sion fertiliser? Or do they comple­ment each other?

Preci­sion fertiliser is certainly not a bad choice and we offer it as for phos­phate and potash. We have also been using a biomass sensor to vari­ably apply nitrogen in real-time for several years now. But in my opinion, you need to follow a kind of ranking order. Every specialist will agree that you need to start with liming, followed by P&K before it’s finally time for nitrogen and micro-nutri­ents. I don’t want to start with things that can’t really do their job effec­tively when the pH value is too vari­able. The other measures don’t help much in this case.

You also need to think about the costs of liming vs phos­phorus or potash fertiliser. My first port of call needs to be a method that is feasible using simple means and with manage­able costs. If we were to find an area with bad pH, 5.2 for example, and apply phos­phate to it, it won’t be absorbed at all because it imme­di­ately becomes fixed in the soil.

So in terms of yield, it is better to first ensure a constant pH than to compen­sate for nutrient defi­cien­cies in certain areas?

At a pH of 5.2, the effect is so strong that the crop can only use 50-60% of nitrogen fertiliser applied, for example. With the current fertiliser regu­la­tions in Germany, and looking ahead to future regu­la­tions, farmers need to keep an eye on their nitrogen and phos­phorus use. The fertiliser we use should be capable of 100% effi­cacy, but it only works if the pH is optimal across the board. 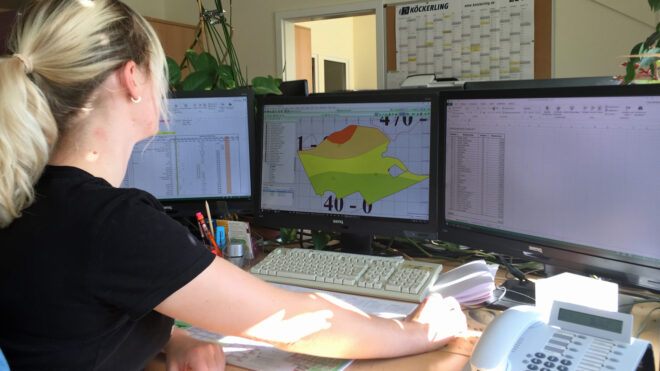 AIS Schier collects data itself and creates the appli­ca­tion maps. In addi­tion, the company offers data analyses for all areas of agri­cul­ture.

How many farms does AIS Schier carry out liming for, and what size do they tend to be?

More than 100 farms, both small and large in size. We have some farms that have around 20-30ha but our largest customer has over 8,000ha. Of course, that doesn’t mean that we lime all 8,000ha in one year. Last year we were spreading 15,000t of lime, which trans­lates into an area of about 15,000ha. I would say that a quarter of our customers are now in the optimum pH range.

What is the economic gain of a tailored lime approach?

I expect it’s around €60/ha thanks to fertiliser savings, increased yields and grain quality. However, this figure does not come from a scien­tific study, but rather from our own assess­ment based on expe­ri­ences with our customers.

How, in terms of agri­cul­tural tech­nology, does preci­sion lime spreading work?

The basic idea is to use GPS control and an ISOBUS connec­tion that you’ll be familiar with from other appli­ca­tions. When it came to using maps, however, it took us a long time to find tech­nology that we could always rely on. We had a lot of discus­sions with our current spreader manu­fac­turer and they fine-tuned the machines until it worked. The chal­lenge of vari­able lime appli­ca­tion is keeping the speed of the spreading discs constant. In a new sub-area of the field, the weight on the spreading discs can change very quickly.

In the past we often had an issue with the speed drop­ping off, which led to a smaller working width and poor distri­b­u­tion. This problem was solved by improving the settings of the hydraulic motors and of the entire hydraulic system. The system has been designed so that the spreading discs can with­stand this change­able load. The vari­able appli­ca­tion rate is ensured by the feed rate of the scraper floor. The speed of the chain adjusts the rate of appli­ca­tion. 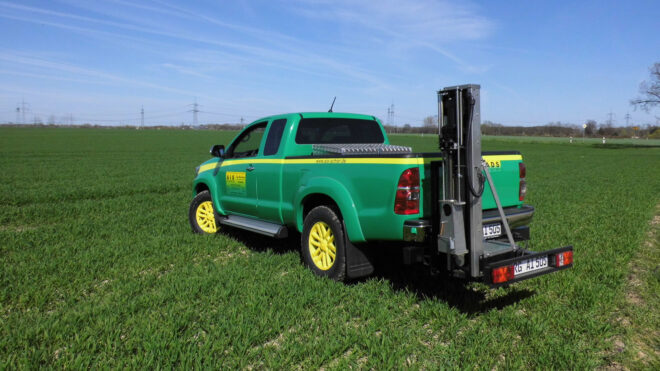 Which vari­ables go into the appli­ca­tion maps?

We prepare the appli­ca­tion maps ourselves using a fleet of five pick up trucks with GPS and computer tech­nology. Soil sampling is done using a grid size of about 3ha. The maps then have grid cells of 24x24m which matches our typical working width of 12m. We currently only create appli­ca­tion maps based on the pH value, but in the future we will also need to take differ­ences in the soil into account. Before we start spreading lime appli­ca­tion maps are discussed with the farmer or farm manager. During this conver­sa­tions we take the final deci­sion about appli­ca­tion rates, timing and fields.

Up until now, it was assumed that every field contains just one type of soil, but this is rarely the case and it means you have to pinpoint your approach. That’s why we are now exper­i­menting with a soil scanner which will allow us to find different soil zones. In areas where the soil is softer and sandier, we could set the pH value even lower. Where the soil is better quality, we can set it higher. All of this infor­ma­tion could be added to the appli­ca­tion map.

“12 years ago we had very vari­able pH values. Since then, however, the values within a field only vary by a maximum of 0.5 and we only need to make small adjust­ments. The key factor is the GPS-controlled sampling. Only with this tech­nology is it possible to accu­rately see how the condi­tions change. Every­thing is saved digi­tally and eval­u­ated throughout the year. As well as liming, we have also started preci­sion P&K appli­ca­tions. I think it’s really impor­tant to look after the soil over the long term to achieve even nutri­tion. That was our goal and it’s worked very well with this tech­nology. In the medium term we saw a 10-20% increase in yield, so it clearly works. Also, I think that now, where we have a level pH, we’re spreading more cost effec­tively because we really only have to balance the pH in specific areas.”