On a test site at the Univer­sity of Halle, crop cultivation endurance tests have been running for more than 140 years. Created by Julius Kühn in 1878, several plots of the ‘eternal rye crop’ have been grown in a field ever since, providing guid­ance for future agri­cul­tural prac­tice.

The build­ings of the 37 hectare test field are getting a bit old. On the wall hangs a black and white portrait of the founder of the agri­cul­tural trials. Dr Julius Kühn died in 1910 and has, since 2008, been the name­sake of today’s Federal Research Centre for Culti­vated Plants (JKI), based in Quedlin­burg. 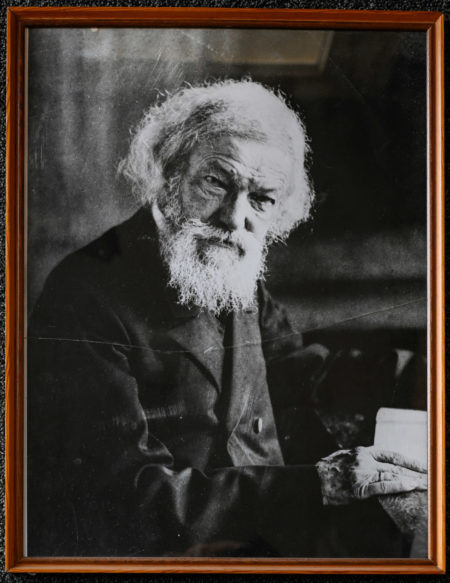 Prof Dr Julius Kühn was one of the most impor­tant pioneers of applied agri­cul­tural science in the mid 19th century.

Dr Kühn, remem­bered as a pioneer, acquired the site, which at the time lay far outside of the city, with a view to giving his agri­cul­ture students a better under­standing of both theory and prac­tice, in the spirit of Humboldt’s universal teaching: Theory in lectures, prac­tical study and exper­i­ments on live plants in the test plots.

This means his students, who had come to Halle from all corners of Europe, moved back and forth between the uni build­ings and test fields. This was the mid 19th century, when agri­cul­tural science was completely unchar­tered terri­tory. Whether or not, back in 1878, Dr Julius Kühn had set his sights on estab­lishing 6,000m2 of multi-plot rye fields that would keep the exper­i­ment going into the 21st century is unclear, but that doesn’t change the fact that these rye plots have survived the First World War, the Nazis, the Second World War and and the fall of the Iron Curtain.

This means rye has been grown, unin­ter­rupted, on the same site for an unbe­liev­able 142 years. This is why it has been dubbed “Eternal Rye Crop­ping” in agri­cul­tural circles.

Station leader, Dr Helmut Eißner, walks along the narrow path that his famous prede­cessor, Dr Julius Kühn, prob­ably also frequented in the mid 19th century. On the edge of the plot, only a few hundred metres further away, you can see Halle’s large depot. A few minutes’ walk from the admin­is­tra­tion building, he stands in front of the second oldest plant endurance exper­i­ment in the world. Only in Great Britain, at the Rotham­sted Research insti­tute, just north of London, are there endurance tests that are even older. “Here, we have five different vari­ants of organic and mineral fertiliser and one unfer­tilised area,” he explains. While it is only the begin­ning of March and the winter rye has not yet been planted, the differ­ences from plot to plot are fairly easy to see.

The results from the “Eternal Rye Cultivation” show that we can use our soils sustain­ably and produc­tively in the long term. That works.

Halle’s endurance test continuum is remark­able. The long-term measure­ment data alone, such as harvest yields and soil samples from the respec­tive endurance fertiliser tests, have great value in terms of explaining ecolog­ical change processes. If harvest yields are then compared with climate data, this endurance test provides valu­able infor­ma­tion about the corre­la­tion between the soil, the crop and the atmos­phere. Even the corre­la­tion between plant compounds and the supply of nutri­ents in the soil was under scien­tific obser­va­tion at this site for a long time. Today, however, this is not the case, as Dr Eißner, who has been respon­sible for the testing station since 2001, regret­fully admits. 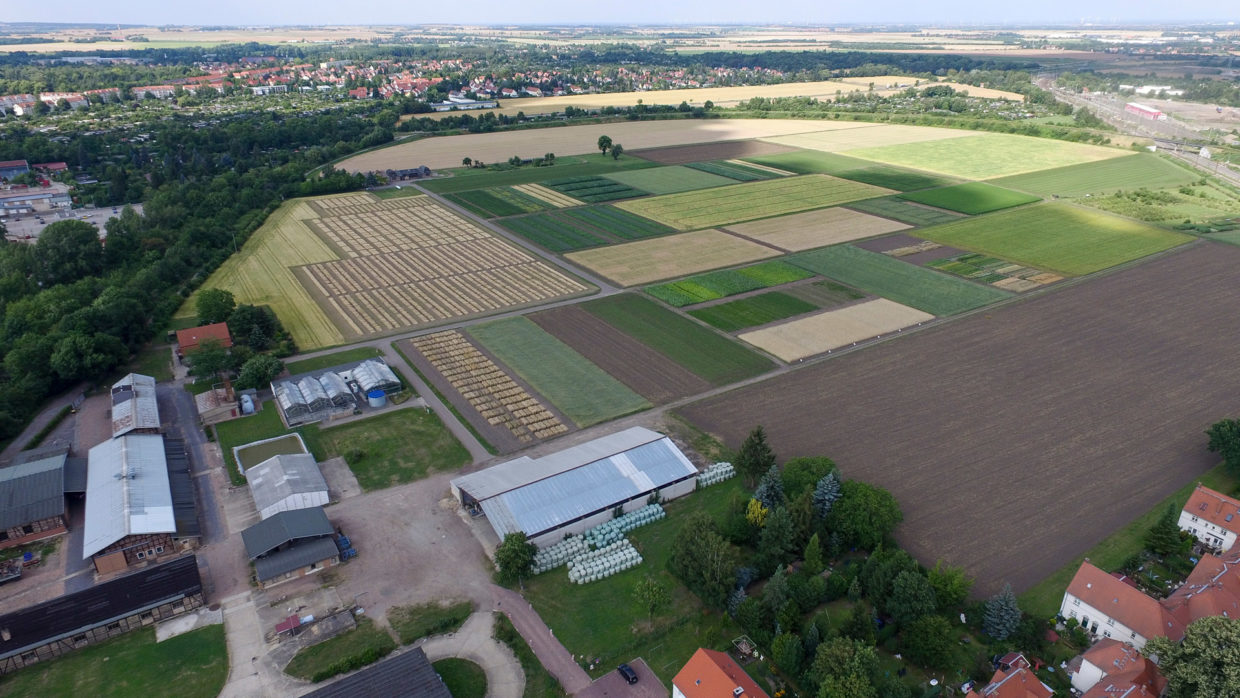 The agri­cul­tural teaching and testing insti­tute of the Univer­sity Halle from above: The site was previ­ously located far out of the town, whereas the town has now grown and moved closer. (© LVS Halle, 2016) 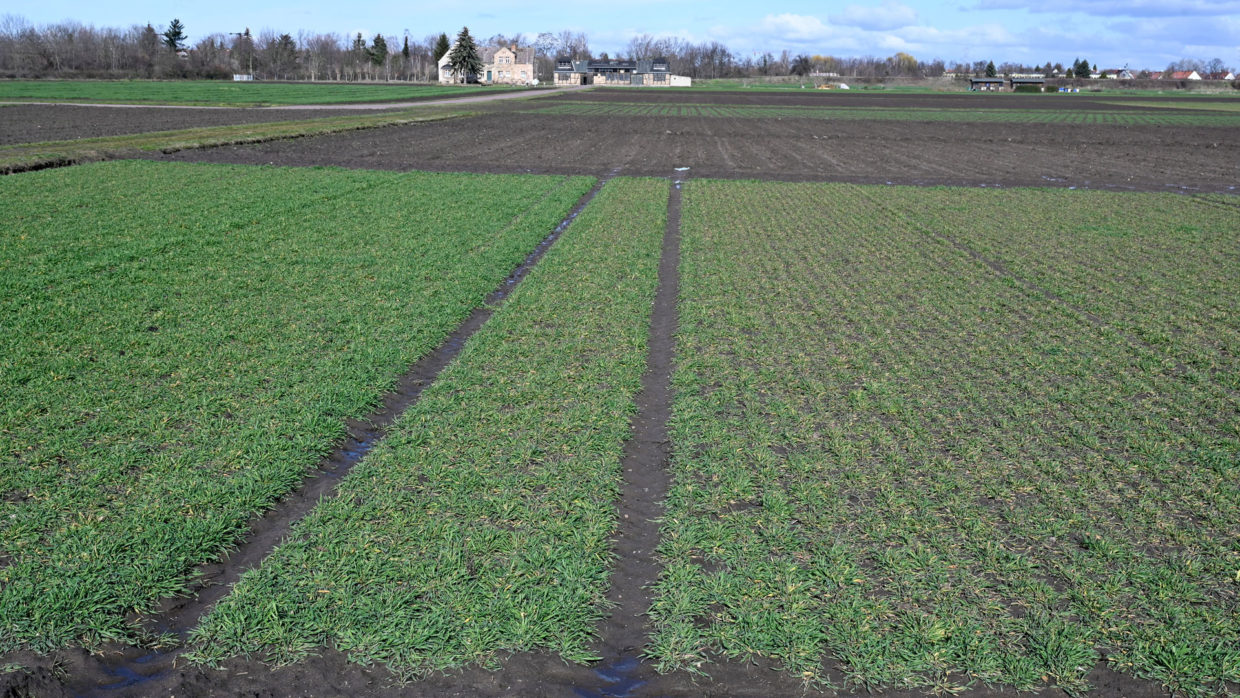 At the faculty, rye trial fields with different fertil­iza­tion methods are inves­ti­gated. 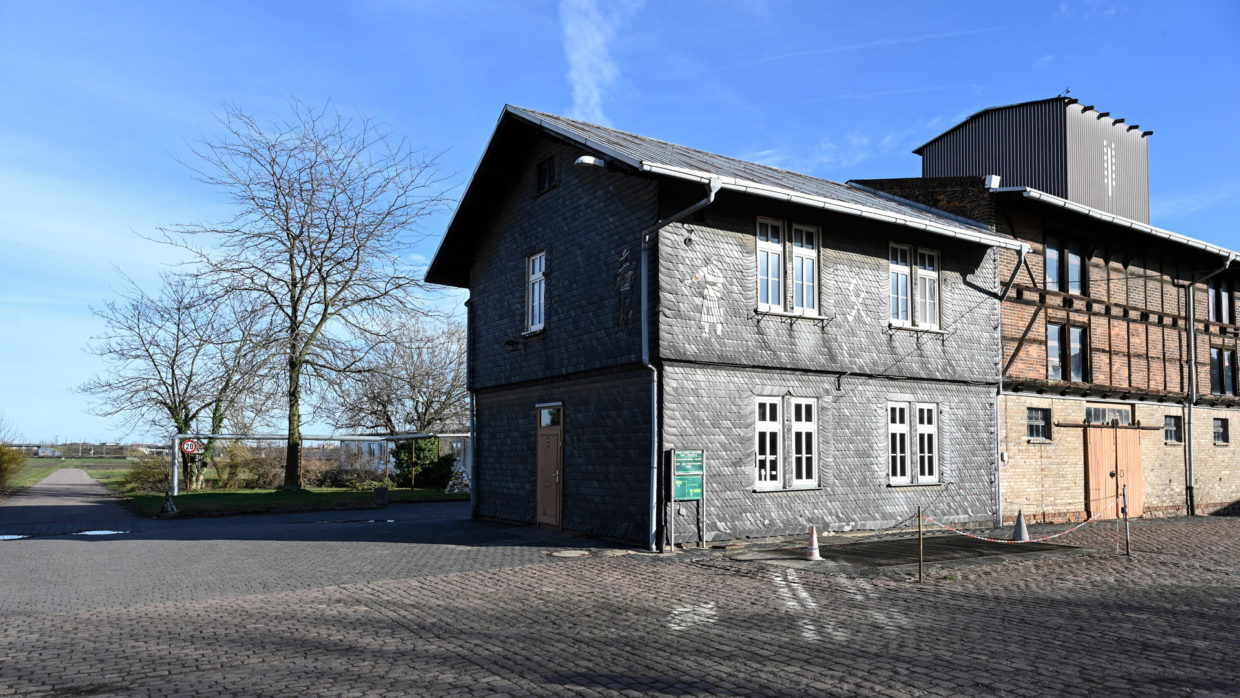 A building of the teaching and exper­i­mental station.

Even non-scien­tists recog­nise rela­tively quickly the impor­tance Halle’s historic soil has for plant research. It repre­sents a unique archive of the cultural history that has been afforded special protec­tion by the state of Saxony-Anhalt since 2007 as a monu­ment for “Eternal Rye Crop­ping”. However, there is a lack of finan­cial resources to allow good research continue. To garner these resources, politi­cians and the research land­scape must be galvanised, a feat which has, however, not always been achieved in the past, Dr Eißner concedes.

Never­the­less, it keeps going, says Dr Eißner, who is at the end of his long career, which he began with a degree in agri­cul­ture at Halle and will end super­vising the test field at the Univer­sity. In the eighties, he was promoted to soybean cultivation at the Leipzig Trop­ical Insti­tute. He worked on endurance field tests in Santa Clara in Cuba and was in Nicaragua from 1990, where he also worked on exper­i­ments at the National Univer­sity for Agri­cul­ture on the outskirts of the capital, Managua.

“As farmers, every­thing we do with the soil is also reflected in the harvests”, says the doctor of agri­cul­tural science, about the compar­a­tive fertil­i­sa­tion exper­i­ment. The plot that has never been fertilised still delivers a return of an extrap­o­lated 1.5 – 1.7t/ha after almost 150 years of monocrop­ping. “Whether or not we now fertilise organ­i­cally or with minerals is rela­tively insignif­i­cant to the soil.” states Dr Eißner. “However, these returns were higher in dry years with manure fertil­i­sa­tion because the water reten­tion ability of the soil increases with more organic fertilisers.”

Espe­cially impres­sive in the Eternal Rye Crop­ping is the compar­ison between the unfer­tilised plots and a plot that was treated with manure from 1893 to 1953, but has not been fertilised since then. Although there has now been no organic fertil­i­sa­tion for almost 70 years, the effect of it is still palpable. “The return has been constant, at 0.5t/ha, across the unfer­tilised area for years,” reports Dr Eißner. “The soil has a very good memory,” he adds, looking crit­i­cally into the future. 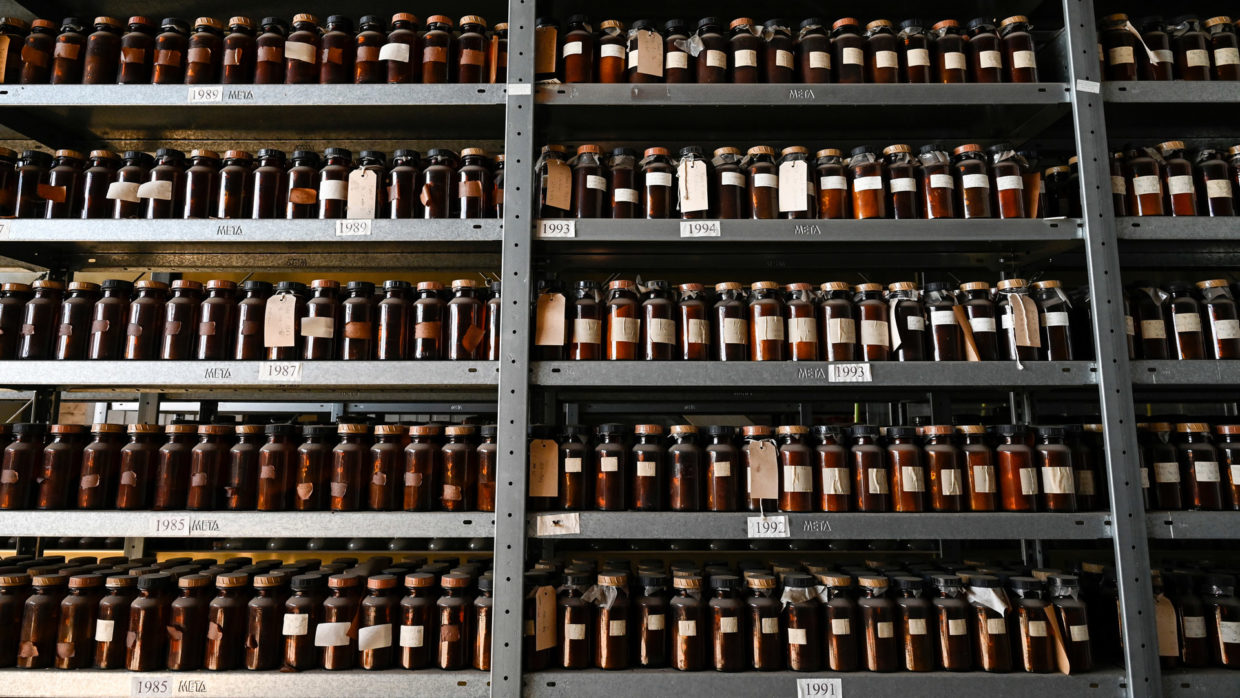 The plants are one thing, the soil another. In the Wohlt­mannschen shed, there are count­less soil samples which have been taken for the rye endurance test in recent years. 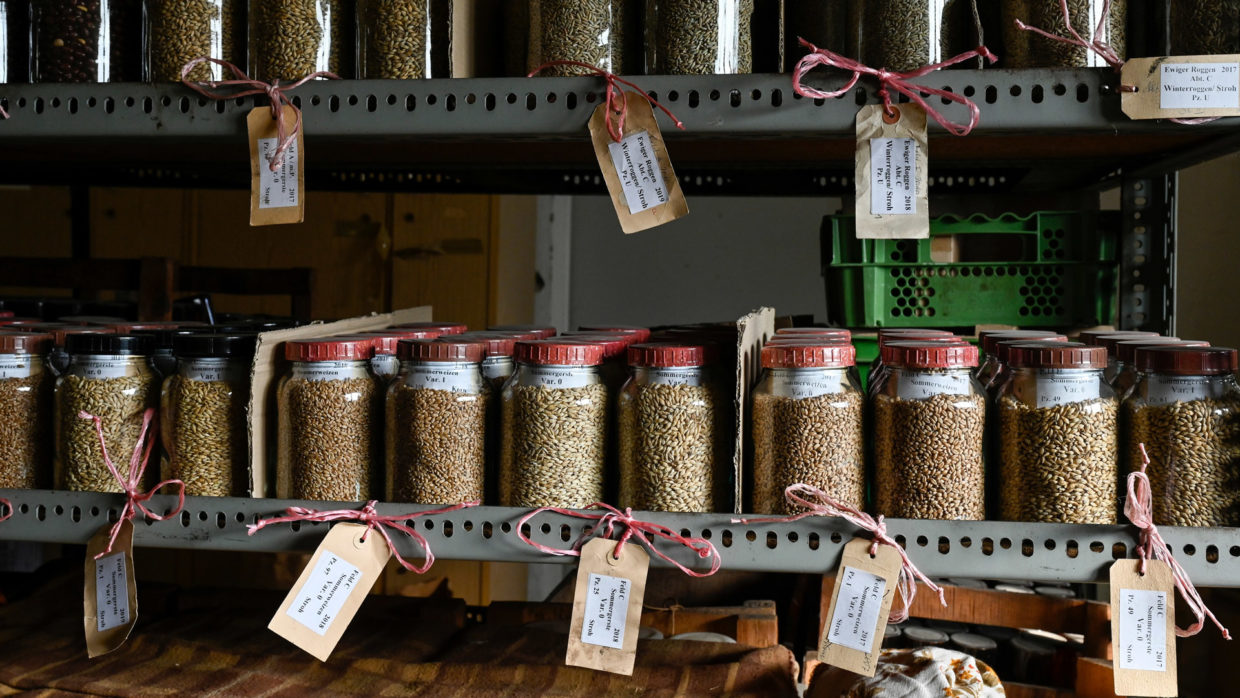 From the test plots to the shelf: Grain samples from the last century are avail­able for research. 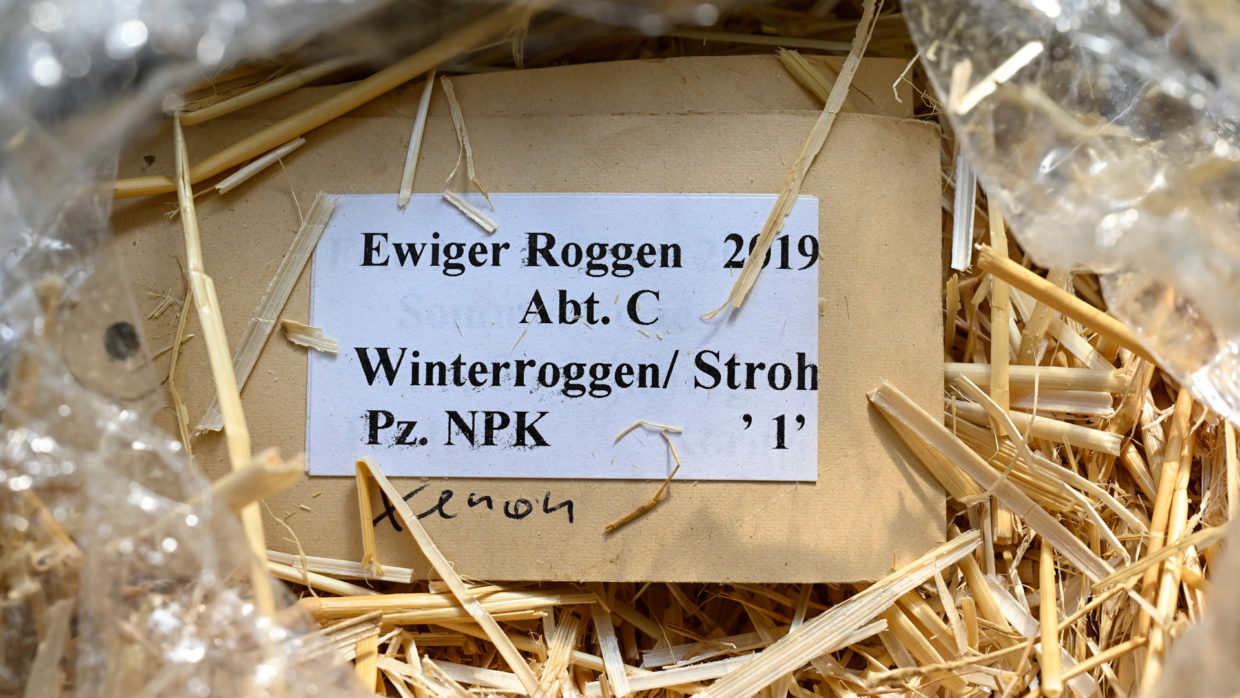 This also applies to straw samples. 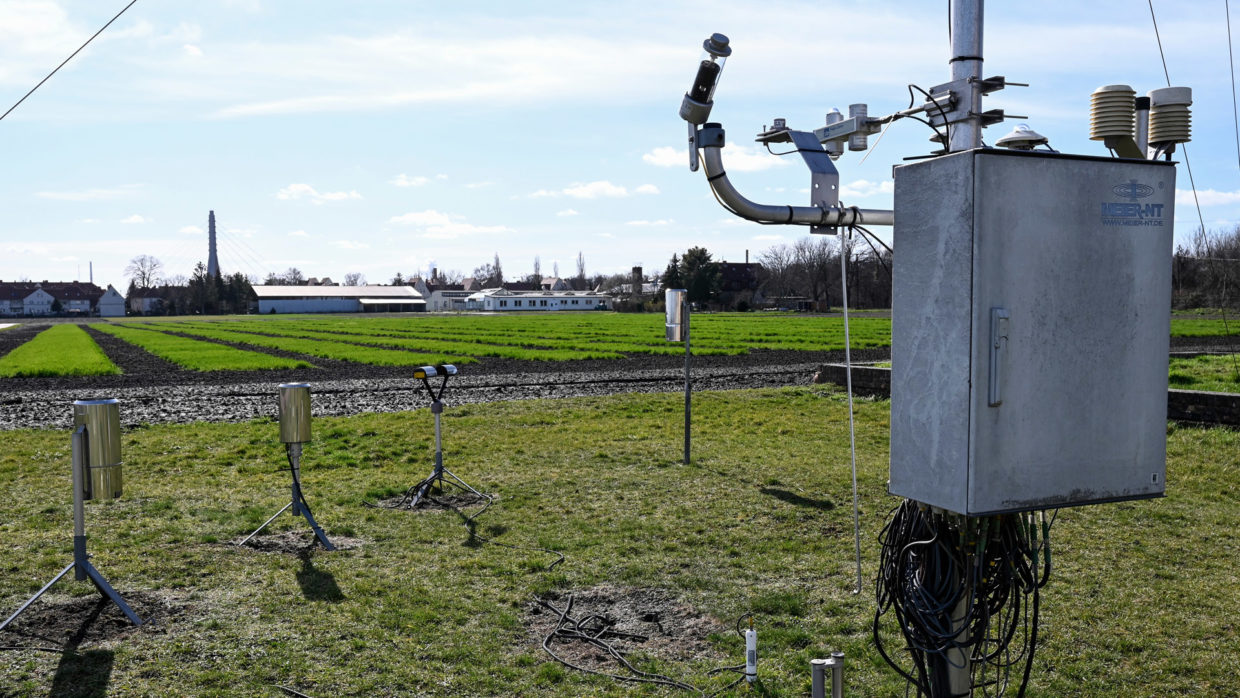 A measuring station at the wheat fields of the exper­i­mental station.

The gener­a­tions after us will have to deal with the conse­quences of the current soil usage. “Ulti­mately, I learned what a respon­si­bility it is to work with the soil here on the endurance trials fields,” says the 65 year old. Can badly treated soils be repaired? Dr Eißner is some­what evasive. “We have no choice, no alter­na­tive. If we want to hold on to exten­sive agri­cul­ture in Germany, it must also be possible for us to put things right. The soil is repairable but it doesn’t even need to be damaged in the first place.”

All farmers certainly share this view. And there­fore it would not only be prefer­able, but in fact absolutely neces­sary that “Eternal Rye Crop­ping” not only be continued as an orien­ta­tion aid for agri­cul­ture, but poten­tially even broad­ened. The histor­ical data on Eternal Rye Crop­ping provide impor­tant scien­tific input for discus­sions on all future ques­tions about climate change and its effects on agri­cul­tural produc­tion.

Inter­view with Dr Helmut Eißner, head of the teaching and testing station at the Univer­sity of Halle. 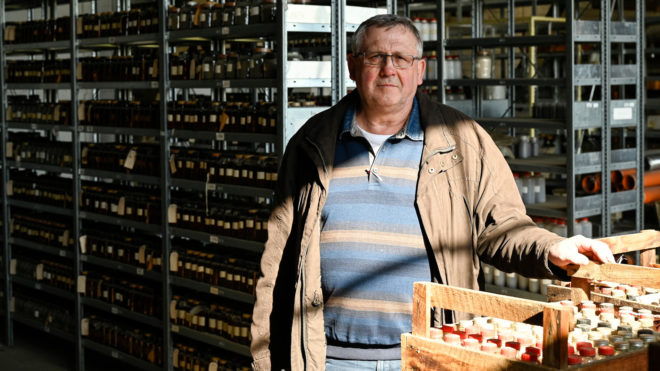 If we take a look into the future, will the long-term “Eternal Rye Crop” (Ewiger Roggenbau) trial still exist in 2050?

I am firmly convinced that the “Eternal Rye Crop” trial will always exist. Whether other long-term fertiliser trials will continue until then is debat­able. If they indeed still exist, they are likely to instead be in the form of direct sowing trials, which dispense with tillage to avoid disrupting the soil.

What conclu­sions can agri­cul­tural researchers draw from the “Eternal Rye Crop” trial in rela­tion to the antic­i­pated change in climate?

If the average temper­a­ture at the trial loca­tion increased by 2°C and the rain­fall distri­b­u­tion remained at a similar level as today, would this have a posi­tive effect on the rye?

If it turns out that global warming makes summers only slightly warmer but winters signif­i­cantly warmer, it would be ok. However, all infor­ma­tion indi­cates that winters will be wetter and summers will be drier. There­fore, growers are also working on vari­eties that are ripe by mid-June.

What research topics will be inter­esting for the future?

In Germany, we have been talking about agri­cul­ture almost exclu­sively in the context of exten­si­fi­ca­tion and envi­ron­mental protec­tion for over 20 years. But the main ques­tion is still produc­tivity. This ques­tion is all the more perti­nent if you know that many trop­ical soils cannot be used as produc­tively and sustain­ably as those at our lati­tudes.

What insights does the “Eternal Rye Crop” trial offer you in this regard?

The find­ings of the “Eternal Rye Crop” trial do show, however, that we can produc­tively and sustain­ably use our soils in the long term. It works. Both with mineral fertilisers as well as organic fertilisers.

It’s up to us whether or not they’re compat­ible. To achieve this, there is no doubt that we need circular-flow thinking and action that lasts for gener­a­tions.

It is partic­u­larly hard to assess the damage caused by compaction in deeper soil layers. But research data and statis­tics indi­cate a consid­er­able impact on agri­cul­tural produc­tivity.﻿