Soil compaction is a well-known problem, but its impact is often under­es­ti­mated and diffi­cult to assess. And it is a growing concern for farming stake­holders.

At the end of November it is bitterly cold in this corner of the French départe­ment Aisne. Frédéric Sabreja, sugar beet grower, inspects the field. The weather is dry – hope­fully it will remain so. “Last year we finished harvesting the beets in cata­strophic wet condi­tions,” he recalls. “The trailers were buried to their axles in mud. They left such ruts that while ploughing a few days later, the tractor almost bottomed out.”

Similar condi­tions in recent years are a concern to members of the machinery co-oper­a­tive Cuma (Co-opéra­tive d’utilisation de matériel agri­cole) of Chalandry, of which Mr Sabreja is pres­i­dent. It affects both the soil struc­ture and crop yields, notes his colleague Nicolas Mallèvre, who accom­pa­nies him that day on a tour of their fields. “Even if it’s not extreme compaction, we see the yield differ­ence: Wheat after rape­seed yields 8-9t/ha, compared to 5t/ha after sugar beet. The later sowing after beets does not account for all of that differ­ence.”

Compaction issues are increas­ingly worrying producers in the North of France, espe­cially with more frequent weather hazards, on natu­rally sensi­tive soils and with crops where excep­tion­ally heavy machinery is involved, such as sugar beet and pota­toes. However, the problem does not stop at the borders. The Nether­lands, Germany, Austria: On a global scale, Europe as a conti­nent has the biggest soil struc­ture prob­lems in the world.

“When 70t machines are working on sandy silt soils in heavy, wet condi­tions, that scares me,” says Mr Mallèvre. “A sugar beet harvester can compact the soil down to a depth of 1m. Earth­worms had better have strong shoul­ders to unpack that!” These concerns are shared by other members of the Cuma co-oper­a­tive, partic­u­larly given the end of sugar beet quotas. The 20% increase in local sugar refinery produc­tion and the resulting extended harvest sched­ules make it increas­ingly diffi­cult to control harvesting condi­tions. So in 2017 the Cuma members decided to invest. 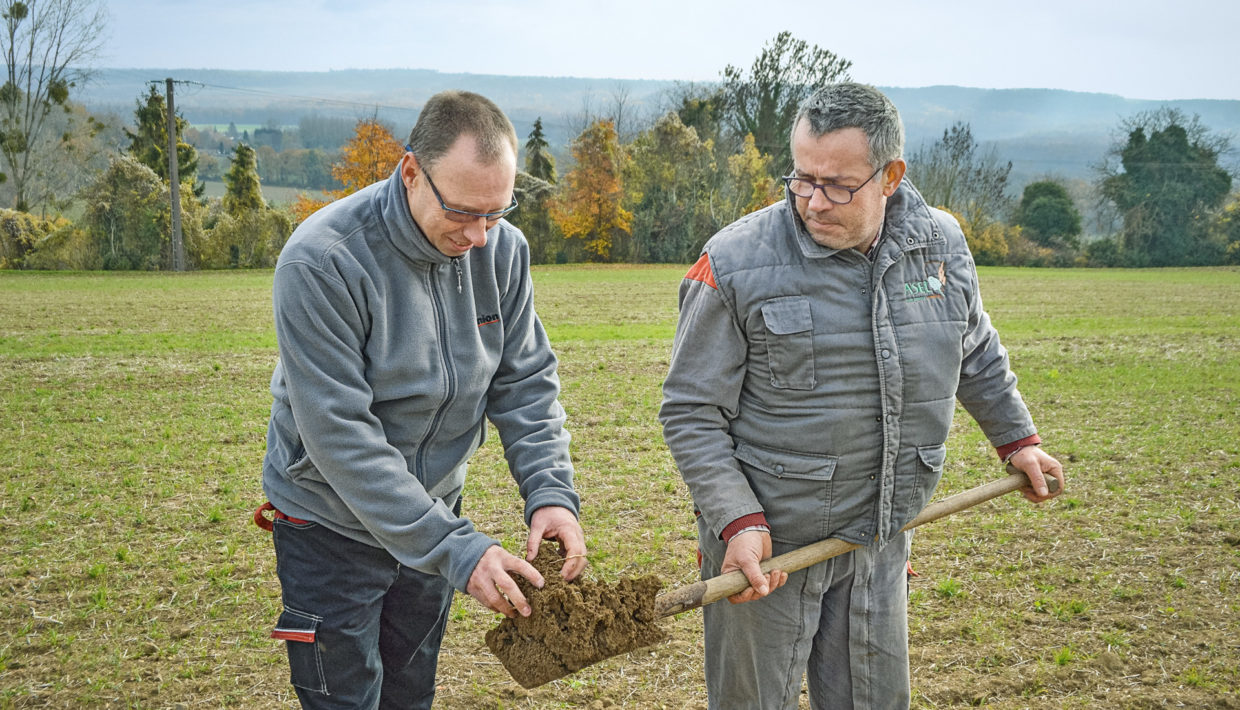 Chalandry, France: Members of the Cuma co-oper­a­tive mainly grow sugar beet, wheat, rape, and maize. For all of the members, protecting the soil is an impor­tant factor. 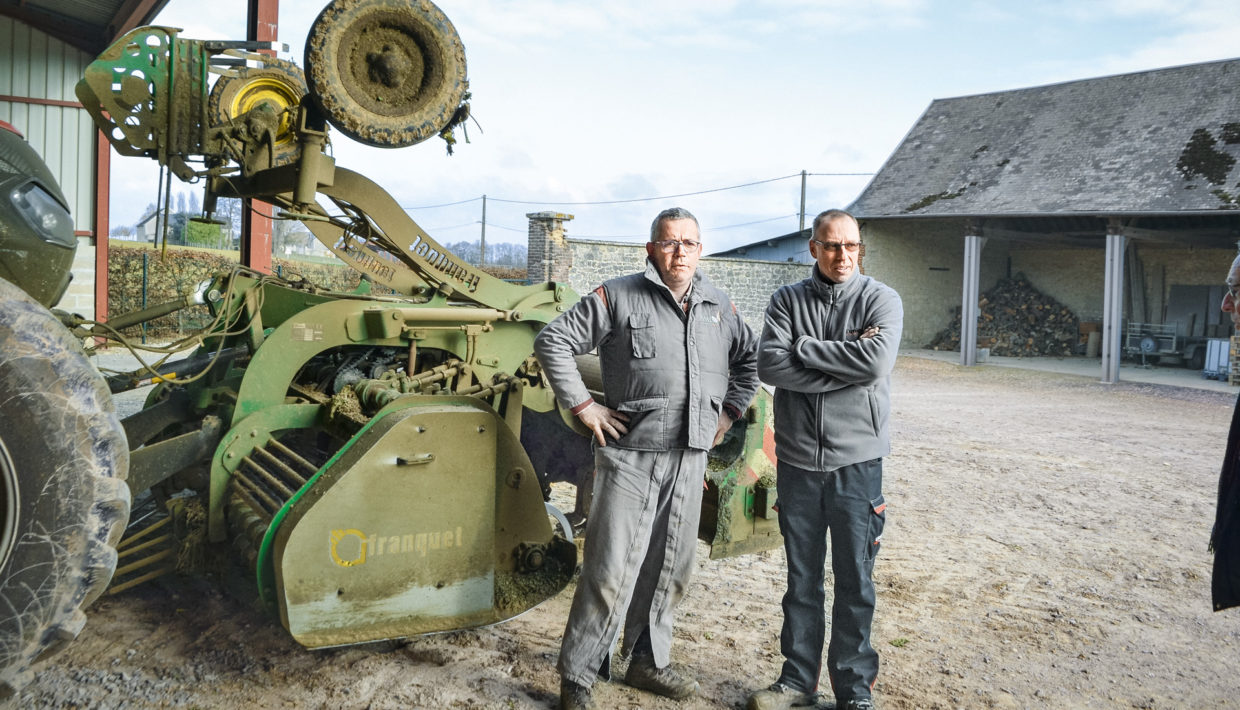 In order to make their own deci­sion on when and how to harvest, Nicolas Mallèvre (left) and Frédéric Sabreja invested in their own tractor-harvester combi­na­tion for sugar beet. 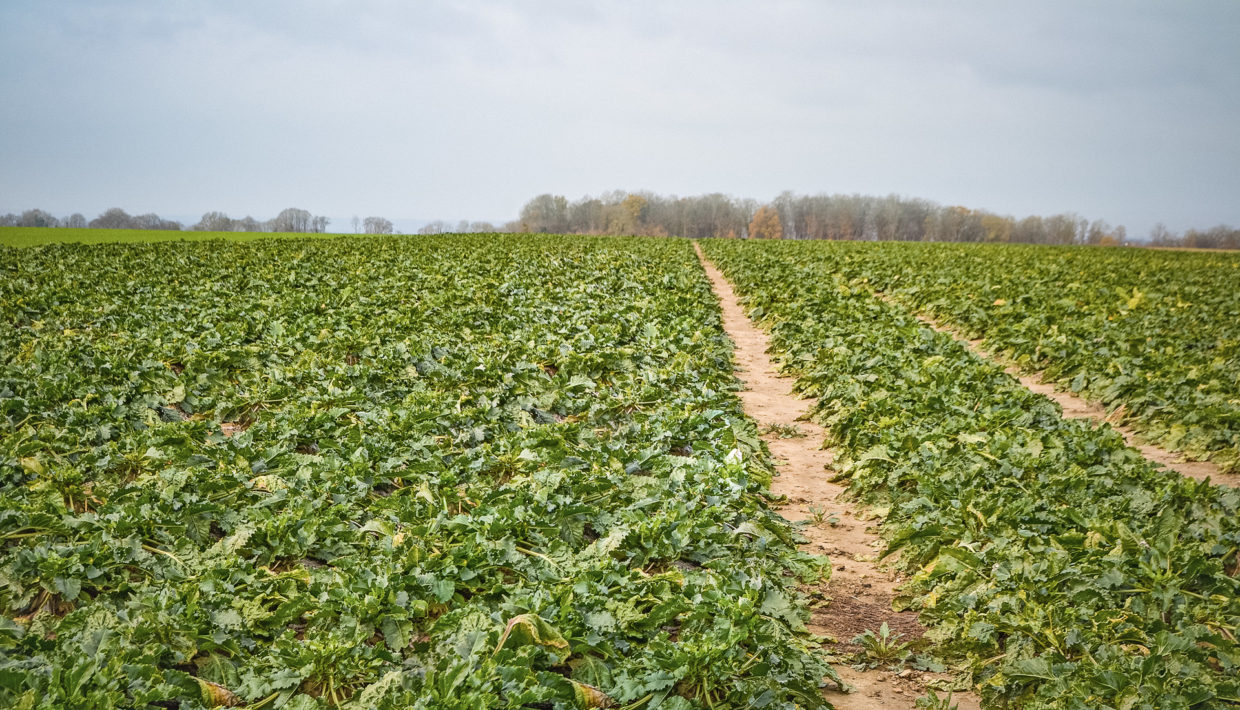 A total of 1,200 ha are managed with jointly purchased machines. Six members share the beet harvesters.

How far does it go down?

“We switched from contracting self-propelled beet harvesters on our 130ha of sugar beet to using a tractor with a front attach­ment to cut the foliage and a drawn beet harvester,” reveals Mr Sabreja. “This allows us both to reduce the weight on the soil and, since we own the equip­ment, to harvest in the best possible condi­tions.” The tractor-harvester combi­na­tion has a net weight of 17t and Ultra­flex tyres are inflated to 1.5 bar to spread the load. Having already adopted preci­sion tech­nolo­gies like auto guid­ance and section-controlled appli­ca­tion, members are now thinking about switching to remote tyre infla­tion systems.

“The number of axles is directly related to the depth of compaction, so we try to have as many as possible on the machine’s chassis,” notes Mr Sabreja. In addi­tion, two rows of beets are sacri­ficed during sowing to allow for wide wheels to pass through.

“We do compact the soil, but try to stay as shallow as possible,” says Mr Mallèvre, pointing at the beau­tiful beet field that stretches behind him. In other words: Compaction is linked to so many vari­ables that it can’t always be avoided. It is there­fore more a ques­tion of control­ling the risk. “If you compact deeper than 30cm, it’s too late. Mechan­ical action is inef­fec­tive: Only deep frost, drought, or time will enable the struc­ture to improve again.”

We need to opti­mise as much as we can, to make farm oper­a­tions sustain­able.

Cuma’s invest­ment in the new harvesting system was logical – but the co-oper­a­tive still needs to stay econom­i­cally viable. The increase in beet produc­tion has been accom­pa­nied by falling sugar prices, while oper­ating costs keep increasing. “Five years ago, we made €500/t (£438/t)”, says Mr Sabreja. “Today, we make €350/t (£306/t). There is no room for error: We need to opti­mise as much as we can, to make the farm oper­a­tions sustain­able.”

Fellow farmers are gener­ally well aware of the risks of compaction, he adds. But, for the time being, many do not see avoiding compaction as a way to increase yields. However, Mr Sabreja expects this issue to become more promi­nent in the years to come. “I think the impact is not yet notice­able enough.”

Soil compaction in a nutshell

What happens in compacted soil? The dimin­ishing size of the pores and cavi­ties begins to adversely affect the exchange of air and water as well as plant rooting. In the absence of a vertical pore system, soil respi­ra­tion (O2 intake and CO2 removal) is no longer guar­an­teed, and water tends to stay on the surface. When there is an air capacity of less than 10% or a hydraulic conduc­tivity of less than 10cm a day, the oxygen defi­ciency will impact the micro-organ­isms and thus the forma­tion of humus. At the same time, plant roots find it more diffi­cult to access nutri­ents, which ulti­mately hampers yield.

How severe is it?

350 km to the North, Louis Claessens, contractor in the Dutch village of Heino, describes the situ­a­tion in almost iden­tical terms. “The problem: Compaction is not some­thing you see. As contrac­tors, we leave the land nice and flat, which means it is impos­sible to see tracks that might have devel­oped below the surface. But the soil has actu­ally become so compacted that water cannot escape.” 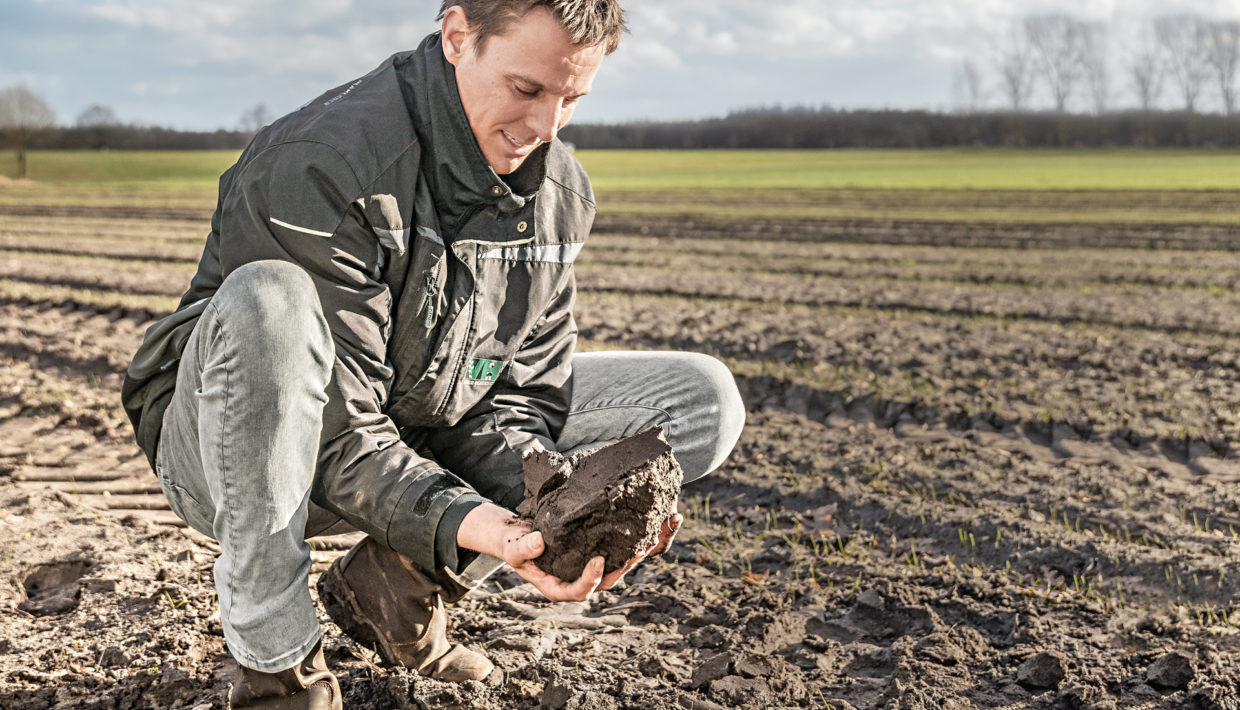 Louis Claessens is a contractor in the Dutch village of Heino. 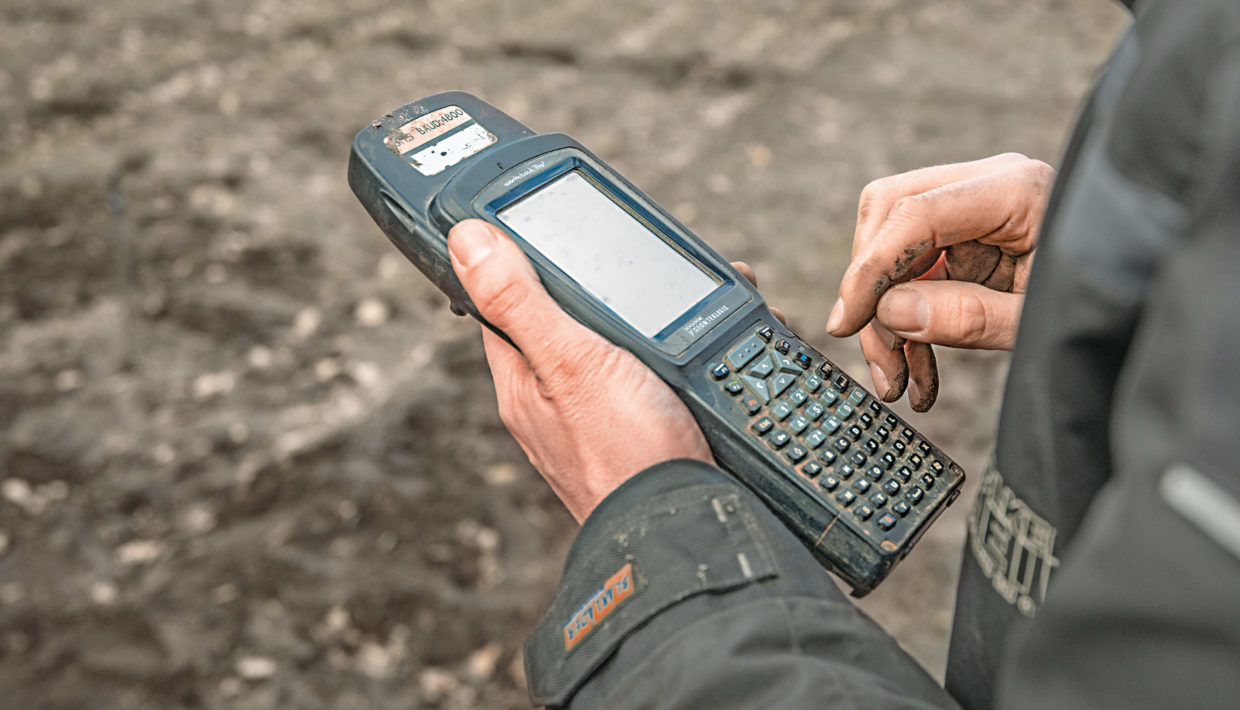 For the contractor busi­ness Volk­erink Heino analysing the soil... 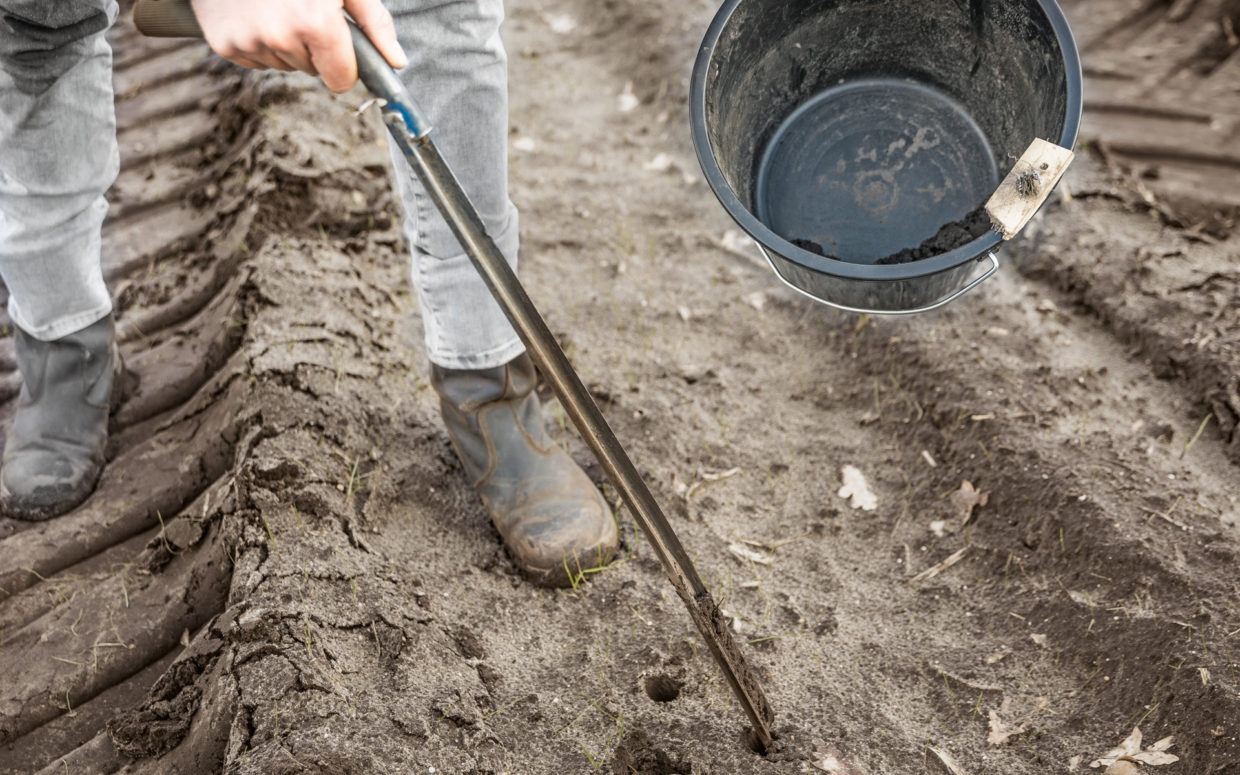 ...and advising clients to minimise compaction is an impor­tant part of the busi­ness strategy.

Passionate about agronomy, Mr Claessens purchased the contracting busi­ness ‘Volk­erink Heino’ in 2009. It was a diffi­cult time to start: The after­math of the 2008 finan­cial crisis was still being felt, and the risk was signif­i­cant. Hence the idea of differ­en­ti­ating himself with services focused on soil analysis and preser­va­tion. “My strategy is to fully utilise the poten­tial of the clients’ produc­tion system. When they make money, so do we.”

In order to show his clients how serious the risk of soil compaction is, he recently organ­ised a field demon­stra­tion, running 14 tests with different types of machines, chassis and tyres. “I wanted to visu­ally demon­strate the impact that the wheel pres­sure has on the soil. Here, dairy farms do not care very much about soil quality.”

The weight of the machine does not neces­sarily have a nega­tive impact on the soil.

At Volk­erink Heino, reducing poten­tial soil compaction drives each invest­ment deci­sion. The Van der Molen eight-wheeled chassis was installed on the 16m3 slurry tanker as well as on one of the trailers. Tyre pres­sures are set at one bar and the load at the wheel remains below the 3t level. Mr Claessens also uses a plough that allows the tractor to remain on the unploughed surface. “In terms of compaction, contrac­tors bear the bulk of the respon­si­bility,” he says. “It’s up to us to do some­thing.” 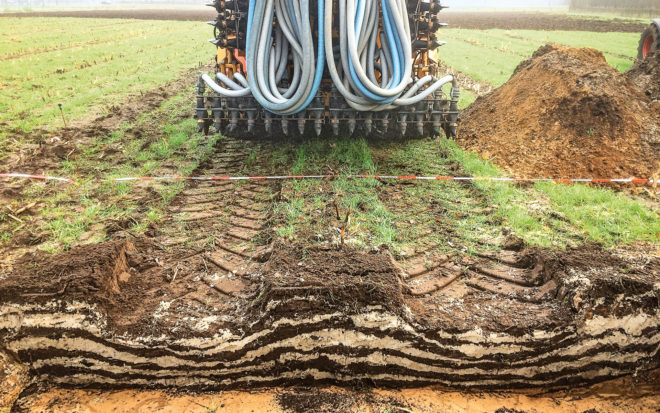 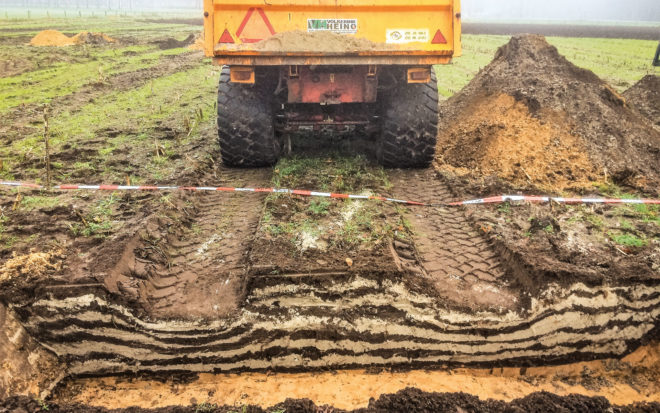 One thing is certain: Preventing compaction will be more of an issue in the years to come, against a back­drop of increasing machinery weights. “However, the weight of the machine does not neces­sarily have to have a nega­tive impact,” says Mr Claessens. “Every­thing comes down to weight per wheel: It is better to carry 16m3 on eight wheels than 10m3 on two.”

Tech­nical inno­va­tions are under way which, coupled with existing preci­sion tech­nolo­gies, should help farmers and contrac­tors to apply methods which allow the soil to breathe, and the plants to take root prop­erly.

So how do you iden­tify compaction? According to soil expert Philip Wright, farmers should first look for areas where the grass or crop is performing badly – is it lying wet or yellowing under stress? “Having iden­ti­fied problem areas, dig a hole in a good area of the field to get a feel for what the soil struc­ture should be like, and then dig in the bad areas – you’ll be able to feel and see the differ­ence straight away.” Dig a series of holes to at least 1.5-2 spade depths, then prise off some soil on a non-smeared face. It should break away verti­cally; if it frac­tures into hori­zontal slabs that’s an indi­ca­tion of compacted layers. Look at the mois­ture in the soil profile, he adds. If there is a wet layer over a dry layer, water isn’t getting through. Also check the soil colour and smell, pres­ence of worms, and root growth. Are the roots growing right down or reaching a layer and then stop­ping? All of this will help to iden­tify the level and depth of compaction, so you can decide how to deal with it.

Crop roots can support and improve soil struc­ture – and dry or frosty weather can offer natural improve­ment through shrinking and cracking, says Mr Wright. “There is a temp­ta­tion to go in with a deep subsoiler or plough, but that will cost more in fuel, disrupt the natural soil struc­ture and poten­tially do more damage. You need to iden­tify the limiting factor in the soil and do just enough to alle­viate it – use the metal just enough to allow the roots to do the rest of the job.”

Prof Rainer Horn qual­i­fied as a professor of soil science in 1981 and from 1998 to 2017 he held the chair for soil science at Kiel Univer­sity, Germany. His scien­tific inter­ests are soil physics and soil ecology with a partic­ular focus on phys­ical land degra­da­tion.﻿

Compaction is an issue that is often discussed in rela­tion to arable land – but it can also be a problem in grass­land. Olivia Cooper speaks to soil expert Philip Wright to find out more.﻿

Many farmers consider contracting as an option to spread their over­heads and generate addi­tional income. It’s also a poten­tial route into agri­cul­ture for new entrants. But it’s not easy, so what should prospec­tive contrac­tors know to make them top of their field?﻿