Geot­hermal, solar and wind energy, methane extracted from manure to produce high-quality natural gas and elec­tricity – there is plenty of green energy in a valley in the middle of the US desert.

If you’re looking to get off the grid, you might want to head for Beaver County, Utah. It’s a high-desert desti­na­tion about halfway between Las Vegas and Salt Lake City, 200 miles from each, and things get pretty sparse out here.

The 10,000 acres of range­land that Tammy Pearson and her family members operate on the western flanks of the Mineral Moun­tains is surrounded by rugged scenery. It looks little different than what cowboys saw on the 19th century range.

With one excep­tion, that is. About 1,500 acres (600ha) of the Pearson range is covered with solar panels, and the elec­tricity they gather trickles north­ward to the Inter­moun­tain Power Plant in Delta, then flows to Cali­fornia. There’s a ready market waiting for this renew­able energy; even the social media giant Face­book has signed up to buy elec­trons that orig­i­nated on the valley floor near the town of Milford.

The Silicon Valley for renew­able ener­gies

Silicon Valley is the epicenter of U.S. tech­nology; the Milford Valley rapidly is becoming the epicenter of renew­able energy to help power that tech­nology. Irri­ga­tion water allows an area of the valley that locals call Milford Flats to flourish with alfalfa, as well as some small grains and even some corn grown for silage. Inter­twined with the flats—and with the large, commer­cial agri­cul­ture taking place there—are a number of leading-edge alter­na­tive energy efforts. 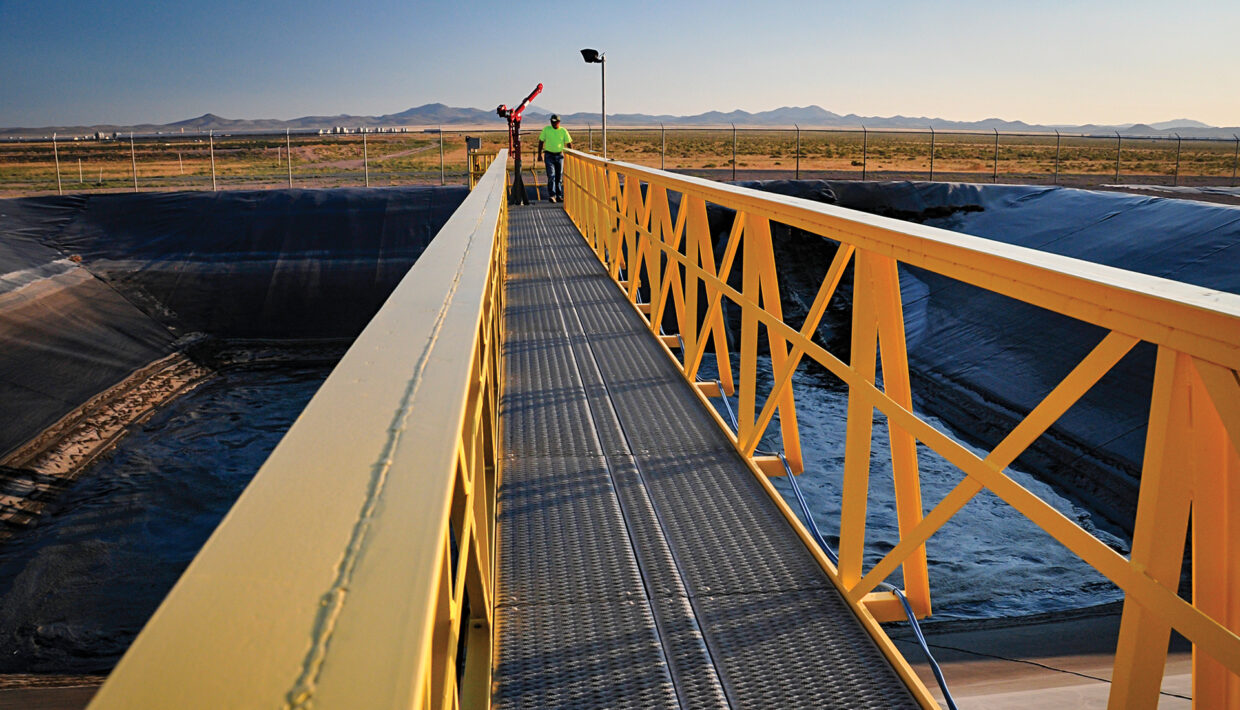 Manure collec­tion is the first step in the process of a manure-to-methane. Methane powers gener­a­tors that produce elec­tricity.

Geot­hermal, solar, wind, elec­tricity from manure, methane captured to make renew­able natural gas—all those forms of “green” energy are featured in the valley. “We have become a sweet spot for renew­able energy,” says Pearson, who also serves as a Beaver County Commis­sioner. “We have become quite a pocket of oppor­tu­nity. You will see more going on in our county with renew­able energy than anywhere else in Utah—maybe more than anywhere else in the nation.”

Compen­sa­tion for elec­tricity fed into the grid

There’s little ques­tion that solar energy is red hot in the valley. Net metering plans have opened up the oppor­tu­nity for some area farmers to site indi­vidual solar projects in the dry corners of their pivot-irri­gated fields. The sun shines 320 days a year here. That means energy can be collected even during winter months and applied to the power grid to offset the cost of pumping water from deep wells to irri­gate adja­cent fields. 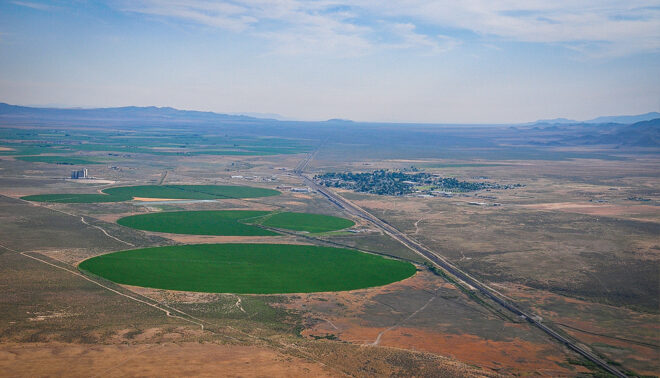 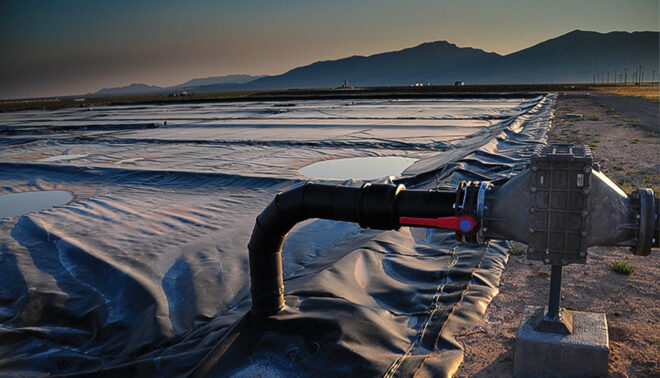 That abun­dant sunshine also lures in larger commer­cial solar projects. Four major projects are in oper­a­tion or under construc­tion in Beaver County, and the expanse of panels has become a feature of the land­scape. The rule of thumb commonly cited in the valley is that an 80 MW solar farm covers 700 acres of land. The latest solar farms are 100 MW or more. That’s a signif­i­cant amount of land. But in this part of Utah, range­land is measured by acres per cow, not cows per acre. And compa­nies try to install the panels in areas where grazing is least produc­tive.

Providing a big boost to the renew­able energy scene is Smith­field Foods, a $15 billion global food company, the largest pig producer in the United States, and the world’s largest pork processor. Smith­field has a signif­i­cant pres­ence in Beaver County, oper­ating a large pig produc­tion system with head­quar­ters in Milford.

Smith­field has been involved in some aspects of renew­able energy in the Milford area for years; Beaver County has about 180 wind towers, making it Utah’s largest wind farm, and the majority of those sit on land leased from Smith­field. The company also supplies manure from one of its pig finishing sites to a company that collects methane and burns it to generate 3.2 MW of elec­tricity. 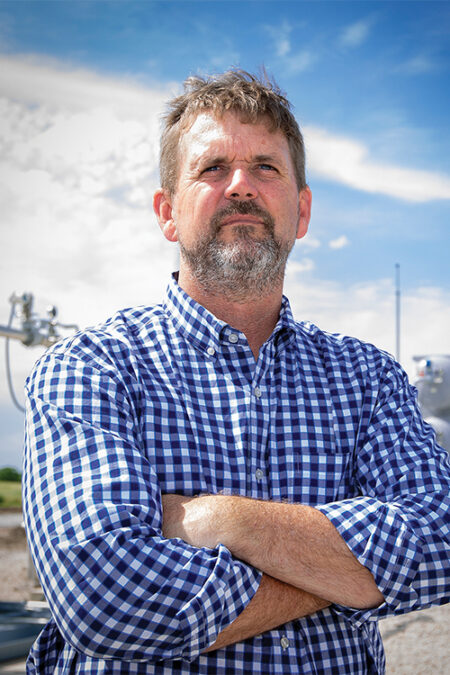 Renew­able energy has really moved onto the front burner for Smith­field, however, in recent months with its bold foray into renew­able natural gas (RNG). That effort helps the company take a big step toward its industry leading goal of reducing its U.S. green­house gas emis­sions 25% across the entire Smith­field supply chain by 2025.

“That’s an aggres­sive goal,” says Kraig West­er­beek, senior director of Smith­field Renew­ables. “Up to 40% of our emis­sions are from manure manage­ment activ­i­ties, so we had to address that to meet our green­house gas reduc­tion goal.”

Smith­field had recently found success with RNG on its Missouri farms; through a joint venture that retro­fitted some of those facil­i­ties to capture, scrub, and inject RNG into the national pipeline system that carries natural gas.

When Smith­field recently added 26 wean-to-finish contract sites in Utah, RNG was in the plan from the begin­ning. Methane is captured under a 100-mil thick HDPE lagoon cover at these sites north of Milford. A network of under­ground pipes collects methane from all 26 sites and sends it to a central processing facility that removes impu­ri­ties. Once the gas makes pipeline quality stan­dards, it travels through a five-mile pipeline to an inter­con­nect, where it is compressed to 1,400 psi and injected into the Kern River pipeline that termi­nates in Bakers­field, Cali­fornia. Gas from the Milford RNG project began flowing in late summer of 2020 as the new digesters began to produce biogas.

This area is a model for how agri­cul­ture and renew­able energy can work together. This is really a remark­able place.

West­er­beek points out that the Cali­fornia market offers a big demand for RNG, where it is used exten­sively to fuel vehi­cles such as light indus­trial trucks and bus fleets. Since RNG collected from a pig farm has the lowest carbon foot­print, it demands the highest price in the Cali­fornia market. But he also sees RNG as a great fit for the Milford Valley. “This area is a model for how agri­cul­ture and renew­able energy can work together,” he says. “This is really a remark­able place.”

When it comes to renew­able energy in the Milford Valley, geot­hermal is poised to take the deepest dive. Geot­hermal energy has been tapped in this region for years. The Blun­dell Geot­hermal Power Plant near Milford was the first elec­tric-gener­ating geot­hermal plant outside Cali­fornia when it went online in 1984. 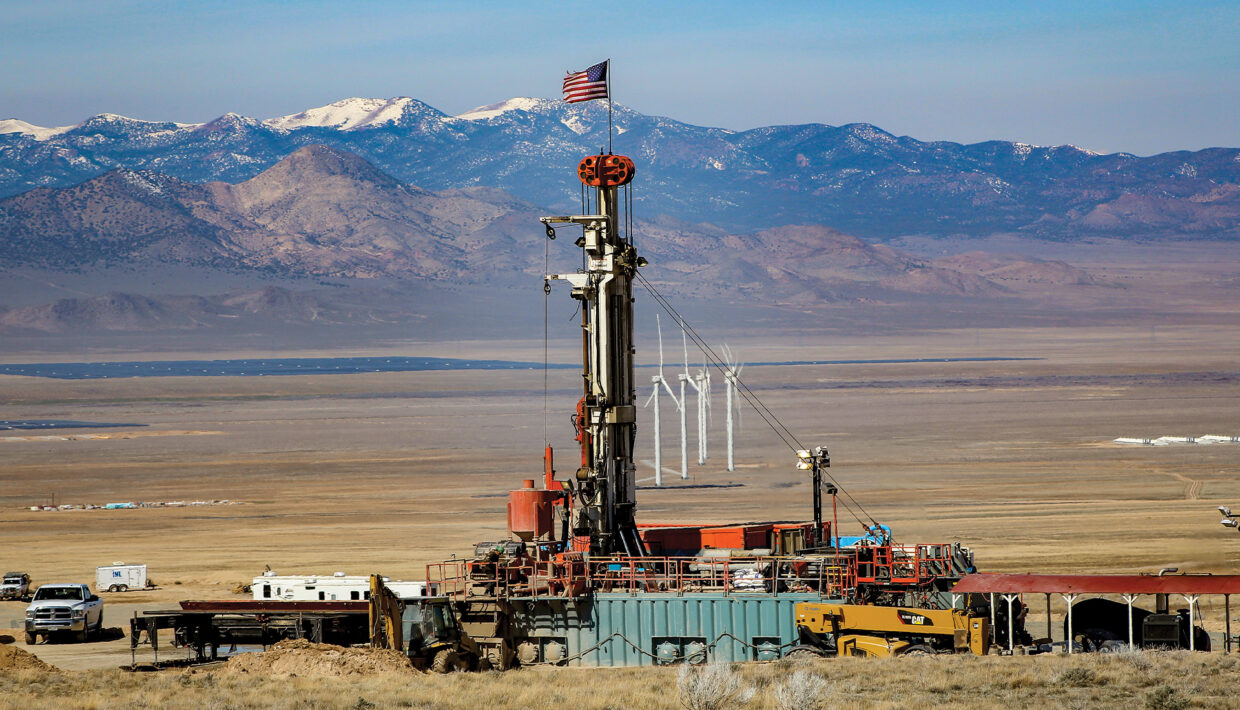 Looking to crack the code on geot­hermal energy, scien­tists at FORGE are preparing to drill 11,000 feet into the earth to improve tech­nology used in enhanced geot­hermal systems. (Photo | Garth Larsen)

But there’s a geot­hermal project in the valley, not designed to produce power, but to iden­tify break­throughs in enhanced geot­hermal system tech­nolo­gies. Directed by the Univer­sity of Utah, it’s called the Fron­tier Obser­va­tory for Research in Geot­hermal Energy, or FORGE.

Prin­ciple inves­ti­gator Joseph Moore believes the key to energy inde­pen­dence may have been under our feet all these years. Scien­tists say that capturing only 2% of the thermal energy that exists a couple of miles down in the earth would provide 2,000 times the annual energy used in the U.S.

So Moore and his FORGE team are hoping to crack the code on how best to collect that energy. “Our idea is to drill deep, nudge open frac­tures in the granite, and recycle water that flows through the 400-degree rock, collecting heat like a radi­ator,” he says. “This isn’t just some­thing that would work in the West. Similar geology is found all over the world.”

If researchers at FORGE are successful, they may use the insights from Milford to revo­lu­tionize the planet’s power grid. “Geot­hermal is the ulti­mate renew­able energy source,” Moore says. “It is safe and clean, and it has a very low envi­ron­mental foot­print. And it is avail­able 24 hours a day.”

Tech­nology has boomed in popu­larity over recent decades – its advance­ment hailed as the making of a fourth agri­cul­tural revo­lu­tion. But while preci­sion tech­nology has a sleek­ness in design it is far from vanity gadgetry and offers producers an insight into sustain­able data.﻿

Lick the salt, take a shot, bite the lime. Tequila! This might be a more typical asso­ci­a­tion with the alco­holic deriv­a­tive of the agave plant, but in the contin­uing search for alter­na­tives to fossil fuels, one research project has grown it to produce bioethanol.﻿