Lick the salt, take a shot, bite the lime. Tequila! This might be a more typical asso­ci­a­tion with the alco­holic deriv­a­tive of the agave plant, but in the contin­uing search for alter­na­tives to fossil fuels, one research project has grown it to produce bioethanol.

The need for alter­na­tive green energy fuels is contin­u­ally increasing as pres­sure mounts to cut green­house gas emis­sions and the demand rises. So what makes the agave plant more suit­able for producing bioethanol than it’s maize corn and sugar­cane alter­na­tives?

With a low water require­ment, the agave plant is able to grow in semi-arid condi­tions without irri­ga­tion. “Agave is an envi­ron­men­tally friendly crop that we can grow to produce ethanol-based fuels and health­care prod­ucts,” says Daniel Tan, asso­ciate professor at the Sydney Insti­tute of Agri­cul­ture. “It’s heat and drought tolerant and can survive Australia’s hot summers.” 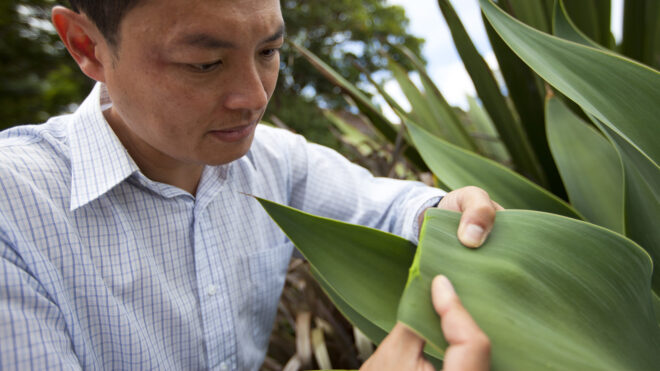 Prof. Tan believes agave has poten­tial as a biofuel.

According to Dr Xiaoyu Yan, senior lecturer in energy and envi­ron­ment at the Univer­sity of Exeter, bioethanol derived from agave is supe­rior to that from maize corn and sugar­cane in terms of water consump­tion, quality, green­house gas emis­sions and ethanol output.

Working together, and along­side colleagues from the Univer­sity of Adelaide, Prof Tan and Dr Yan conducted the first compre­hen­sive life­cycle assess­ment and economic analysis of bioethanol produced from an agave field exper­i­ment in north Queens­land. “Our analysis shows a bioethanol yield of 7,414l/ha per year is achiev­able with five-year-old agave plants.”

Though the study concluded that sugar­cane yields more, at 9,900l/ha per year, its envi­ron­mental impact through fresh­water eutroph­i­ca­tion (88%>), marine ecotox­i­city (53%>) and water consump­tion (69%>) was higher than agave. 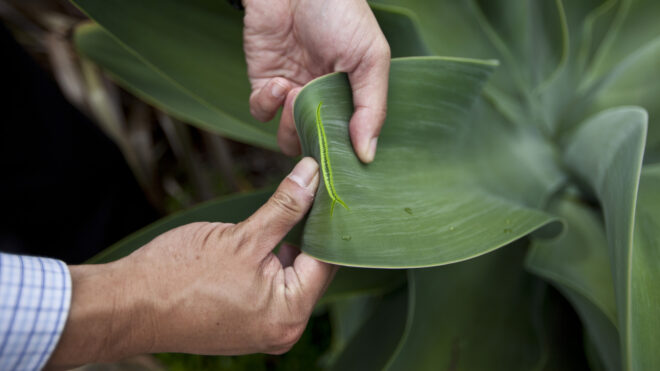 Agave grows in semi-arid condi­tions and is drought tolerant.

Agave grows even in dry soil

“This shows agave is an economic and envi­ron­mental winner for biofuel produc­tion in the years to come,” said Prof Tan.

“Agave is an economic and envi­ron­mental winner for bioethanol produc­tion.”

Unfor­tu­nately, the economic analysis has suggested that the first gener­a­tion of bioethanol produc­tion from agave is not currently commer­cially viable without govern­ment support, explains Prof Tan. “However, this may change with emerging demand for new ethanol-based health­care prod­ucts, such as hand sani­tisers.”

Though the study exclu­sively looked at growing agave in Australia, a variety of the plant has been grown in parts of southern Europe since the mid-16th century, indi­cating there could be poten­tial for it to be grown for bioethanol in other parts of the world in the future.