A Come­back in East Africa

Halters, twine and rope: Farmers from across the world rely on prod­ucts spun from the natural fibre, sisal. Until the late 1960s, Tanzania was the leading producer of sisal world­wide. But then the successful advent of synthetic fibres resulted in a prolonged slump. Now this versa­tile natural fibre, and thus northern Tanzania, is expe­ri­encing a new boom.

This man is a phenom­enon. Most men of his age would be enjoying a well-earned retire­ment – but not him! When he left the state-run Tanzania Sisal Authority almost 30 years ago, he imme­di­ately began his own adven­ture with sisal. He purchased an aban­doned sisal plan­ta­tion at the foot of the Usam­bara Moun­tains in northern Tanzania for a cheap price. The 1,750ha site was covered with weeds growing rampantly, many of the agave plants were old and gone to seed and no longer fit for sisal produc­tion. Now the sisal plan­ta­tion is all up and running again. More than 300 employees are now culti­vating and processing the prickly green leaves of the Agave sisalana plant, of which the fibres were once famously known as the “white gold of Africa”. 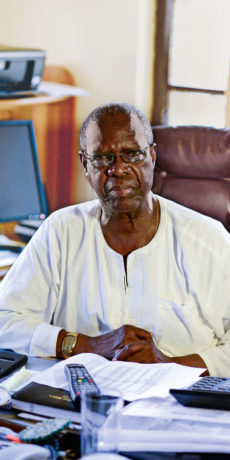 Demand for sisal is growing

The talk is all about Damien Ruhinda. He is over 80 years old but looks more like 60. “Yes, sisal is a tough thing”, he says, in the small office of D. D. Ruhinda & Company Limited in Tanga. “Firstly”, he says drily, “selling is no problem, it’s the produc­tion which is the real chal­lenge.” But his mission goes beyond his own private commer­cial objec­tives: He wants to play his part in returning sisal fibre, which was once Tanzania’s most impor­tant export, to its former glory.

But to achieve this goal, Tanzania’s entire sisal industry, from the plan­ta­tions to the down­stream processing oper­a­tions, still has a long way to go. Of course the outlook is not bad now because inter­na­tional demand for the natural fibre is growing again. In addi­tion to the domestic market, Mr Ruhinda refers to customers in the Arab coun­tries and China, as well as in Europe.

The bulk of sisal exports currently go to the Arab coun­tries, where large quan­ti­ties of the fibres are used as struc­tural mate­rial in plaster construc­tion work. Another portion goes into world­wide carpet produc­tion, and it is also used in agri­cul­ture and ship­ping – sectors in which, after many years of decline, world­wide demand is also picking up again. For example, ship­ping organ­i­sa­tions in Australia and New Zealand are seeking a ban on the use of synthetic ropes because they are not biodegrad­able and hence pollute the seas. 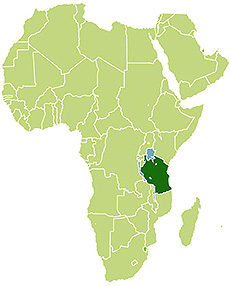 Tanga is a relaxed, almost sleepy looking trop­ical port city on the Indian Ocean where mosques and Chris­tian churches are peaceful neigh­bours. From here, the sisal produced in northern Tanzania is exported over­seas. During colo­nial times, the golden fibres were carried to Tanga by rail – but this era is long gone. The old goods station now looks more like a neglected indus­trial museum than a func­tional trans­port hub.

Selling is no problem, it´s the produc­tion which is the real chal­lenge.

Today the raw fibres and yarns from the plan­ta­tions and spin­ning mills are ferried to the port city in trucks. “Mkonge ni Tanga, na Tanga ni Mkonge” is written in large letters on the sign in front of the building from the British colo­nial period, which houses the Tanzania Sisal Board. Trans­lated from the national language, Kiswahili, this means: “Sisal is Tanga and Tanga is sisal”. 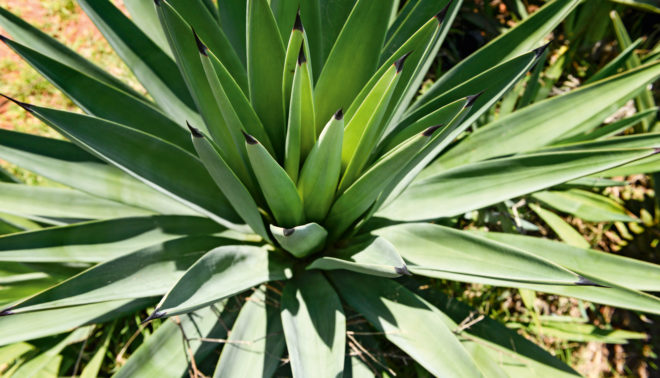 View from above – a young sisal plant (Agave sisalana). 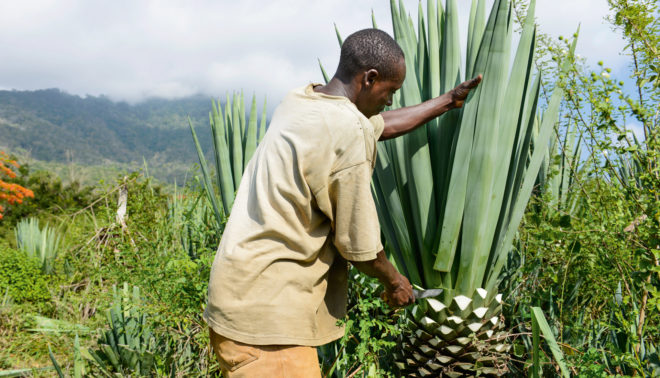 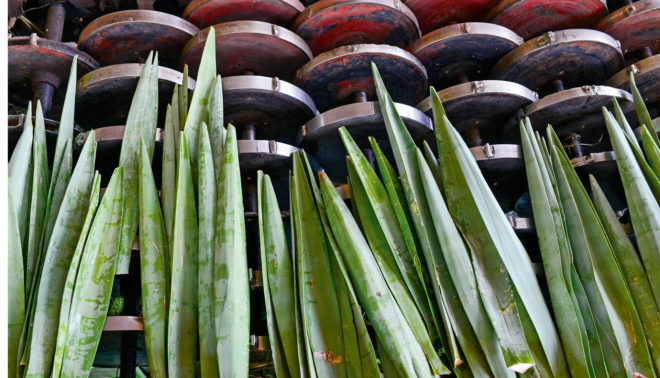 Freshly harvested sisal leaves are rolled into a machine that sepa­rates the fibres from the plant meat.

This under­scores the huge impor­tance that this resur­gent raw mate­rial once had for the city and the surrounding region. In the 1960s for example, there were still 100,000 people working in the sisal industry; culti­vated on 500,000ha of land. Today, according to Yunus A. Mssika, sisal is currently regu­larly harvested on about 43,000ha. “Our efforts are focused on increasing this number signif­i­cantly in the coming years,” adds the young man from the Tanzania Sisal Board, in which more than 40 sisal-producing compa­nies are organ­ised.

Outdated tech­nology is holding back produc­tion

Mr Ruhinda dampens the euphoria a bit. “Wishes are often the father of ideas,” he says in an old hall where he wants to construct a new spin­ning mill to increase the company’s own pro duction capacity and income. “Above all, we lack capital in Tanzania,” declares the grand seigneur, pointing to the old, used spin­ning machines bearing the name “Fibre Mack­high Good Machine”, manu­fac­tured in 1967. A handful of employees wearing boiler suits are slowly and painstak­ingly restoring the old spin­ning machine.

“It’s diffi­cult to obtain such machines at all, because the demise of the sisal fibre industry also affected the machinery manu­fac­turers,” Mr Ruhinda explains. “For example, there isn’t actu­ally any inno­va­tion in constructing sisal processing machinery, so we are forced to rely on tech­nology which, while proven, is out-of-date.” 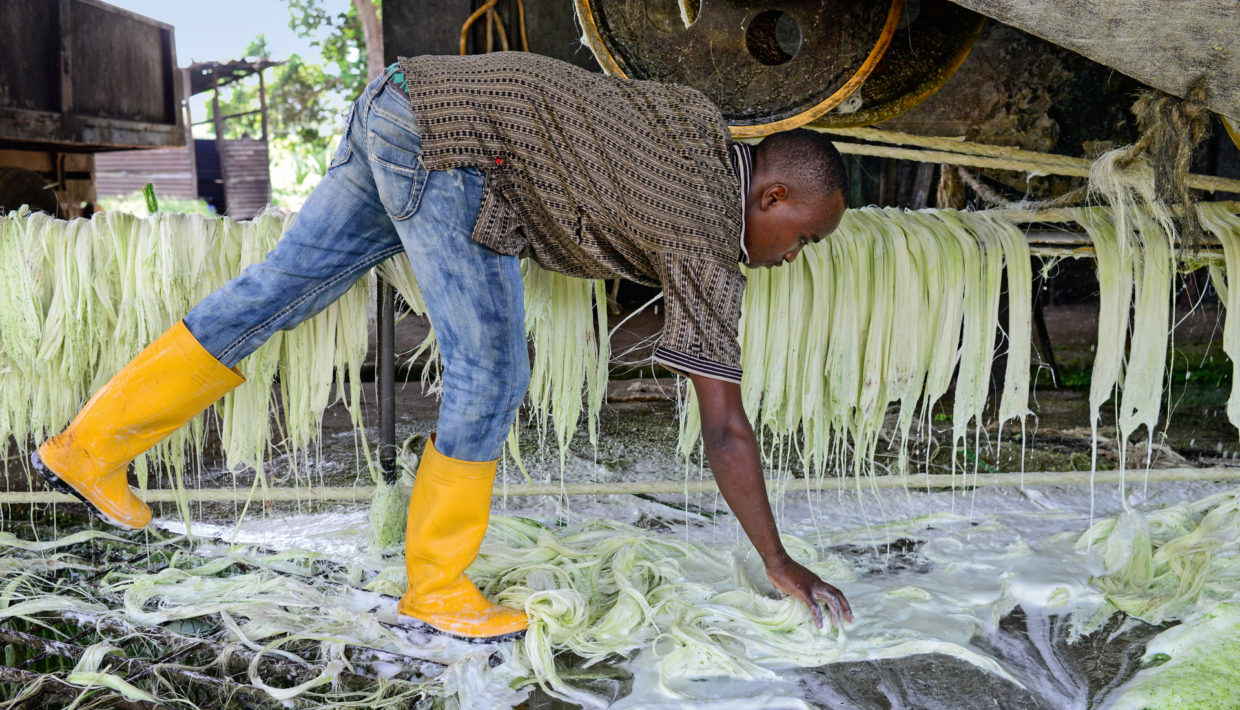 The machine squashes the sisal leaves, thereby sepa­rating the fibres form the other plant mate­rial. 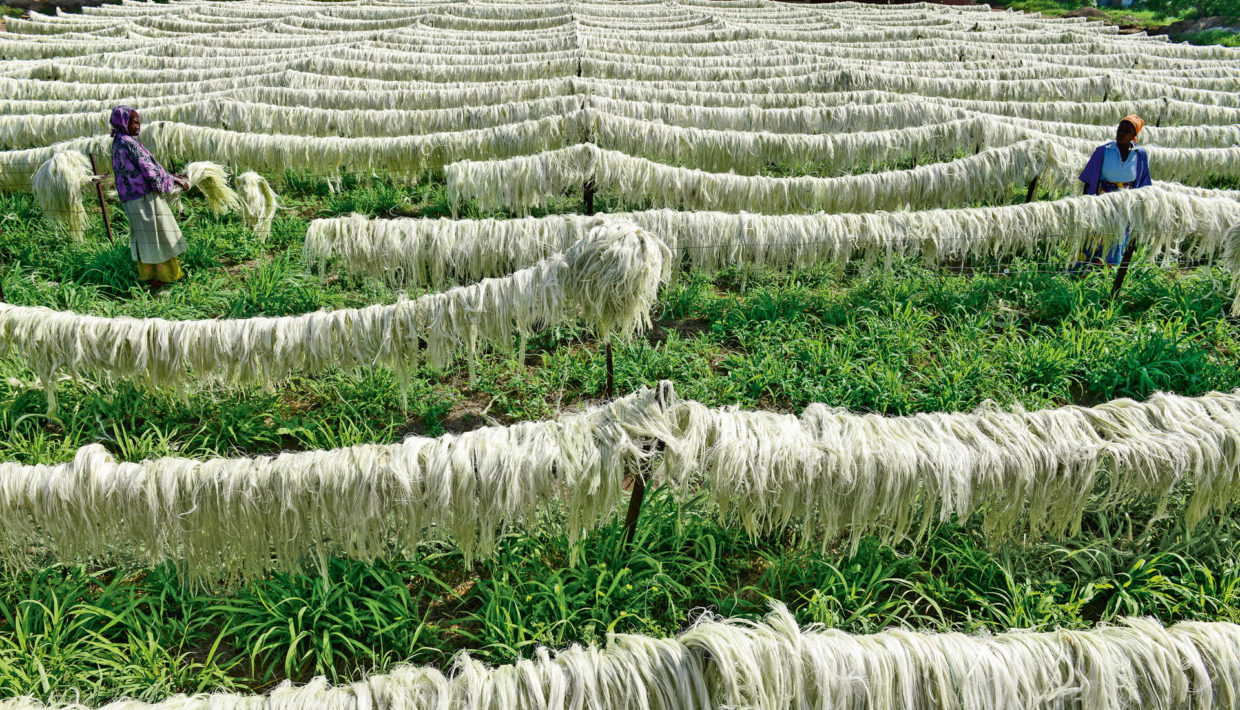 Workers are hanging up the sepa­rated fibres for drying on open-air racks. 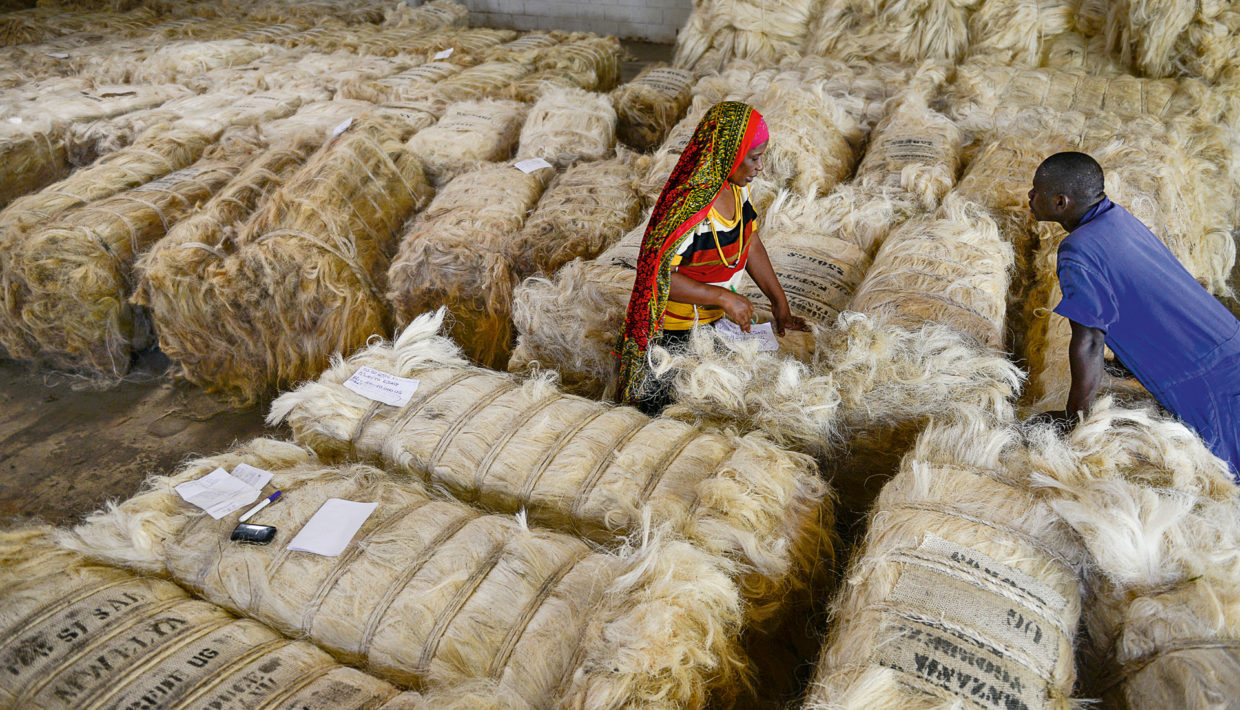 After combing out the residues, the fibre is pressed into large bales and trans­ported for further processing. 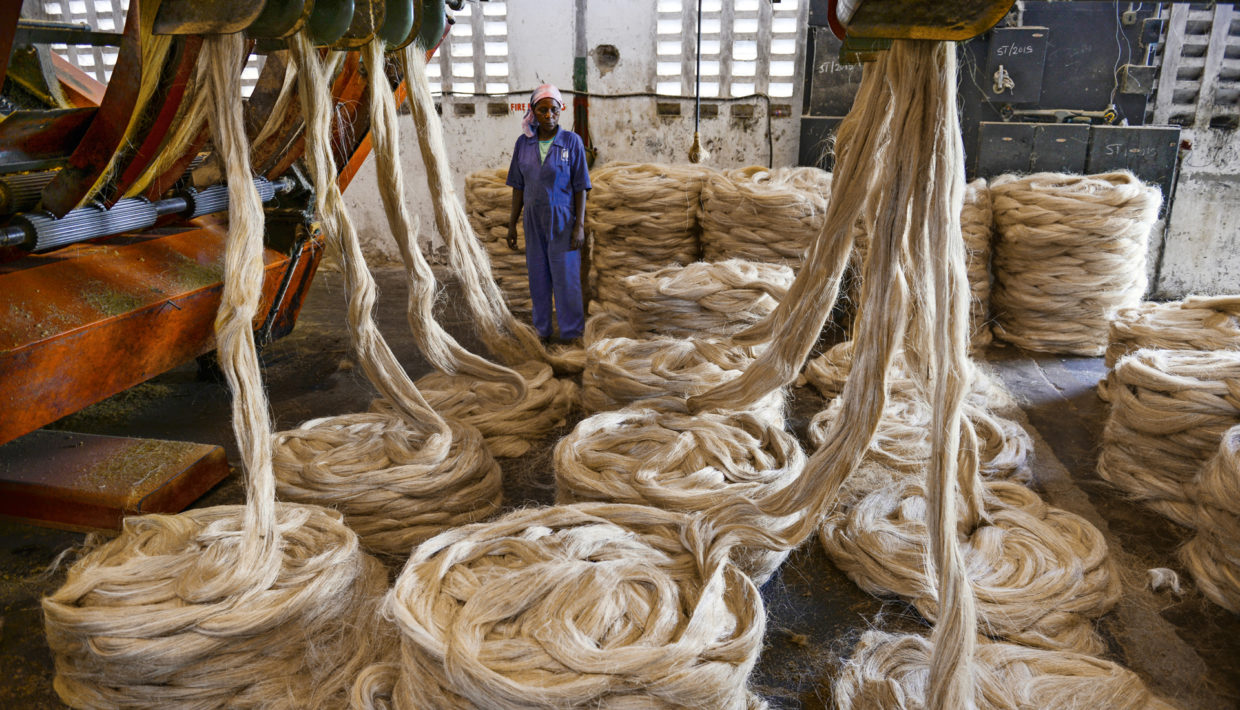 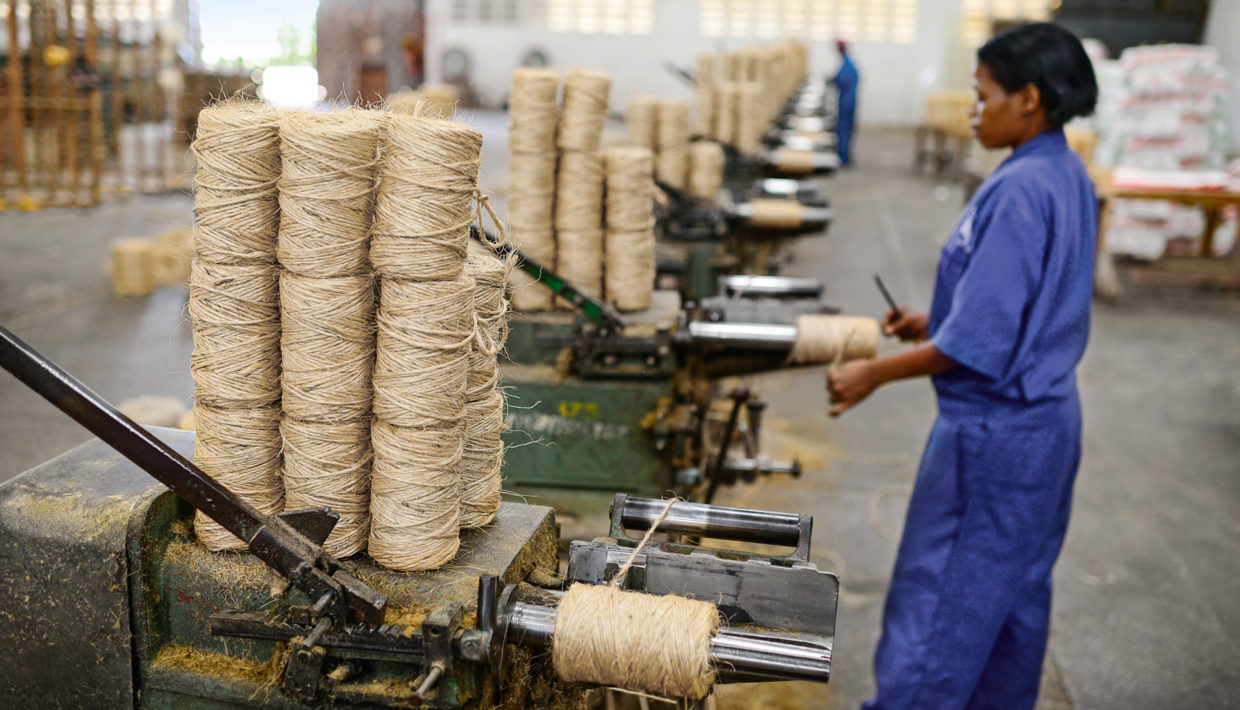 Among other things sisal fibres can be turned into high-quality and envi­ron­men­tally-friendly twine and rope. 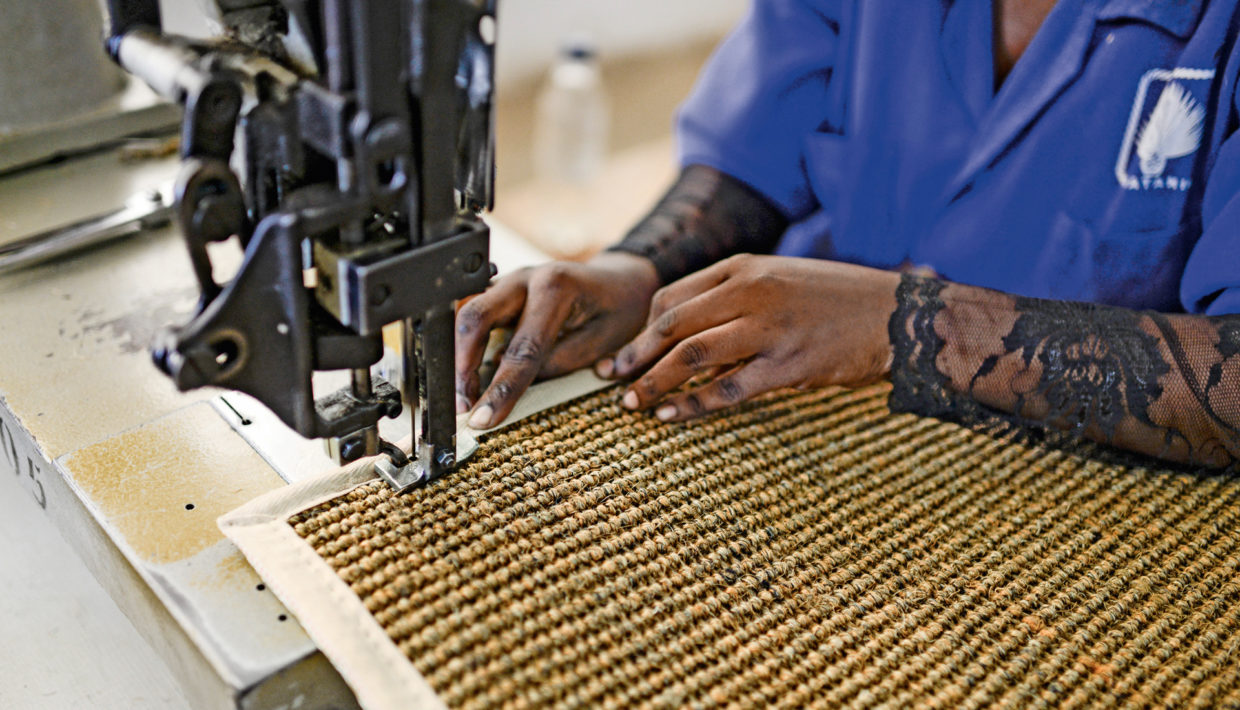 Floor mats and carpets made of sisal bring nature into the living room. 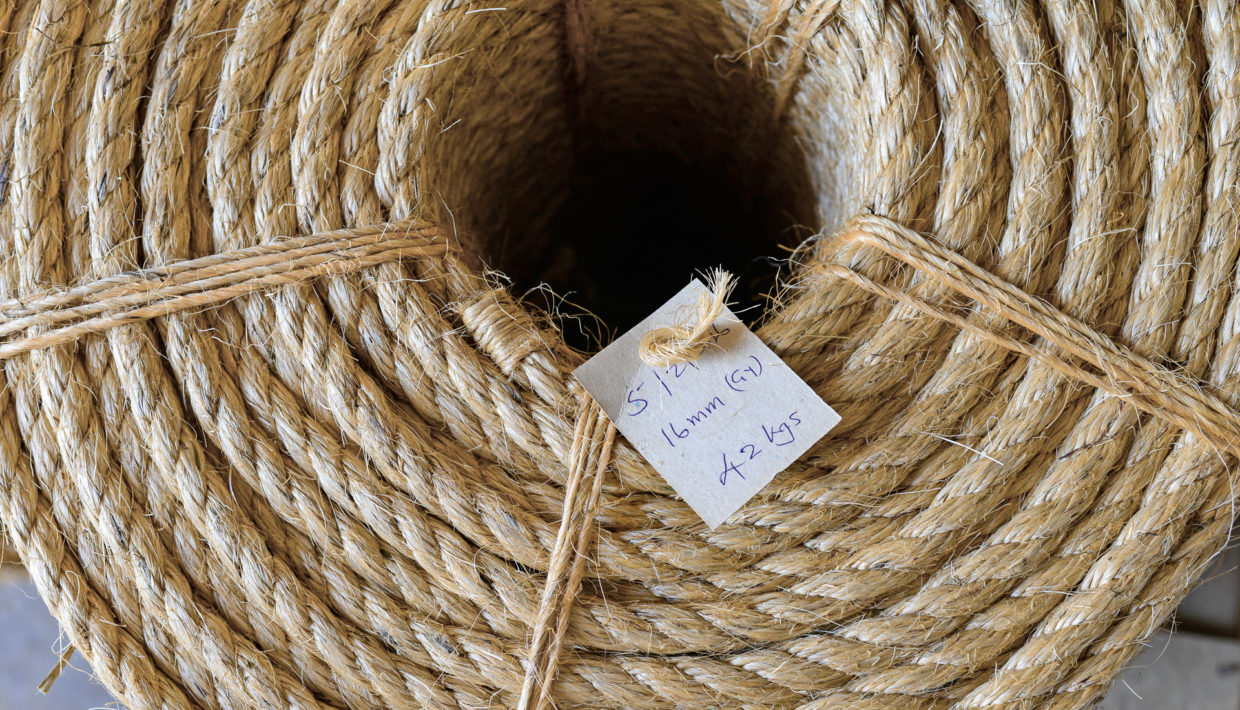 An impor­tant market for sisal is the produc­tion of biodegrad­able rope for naval purposes. 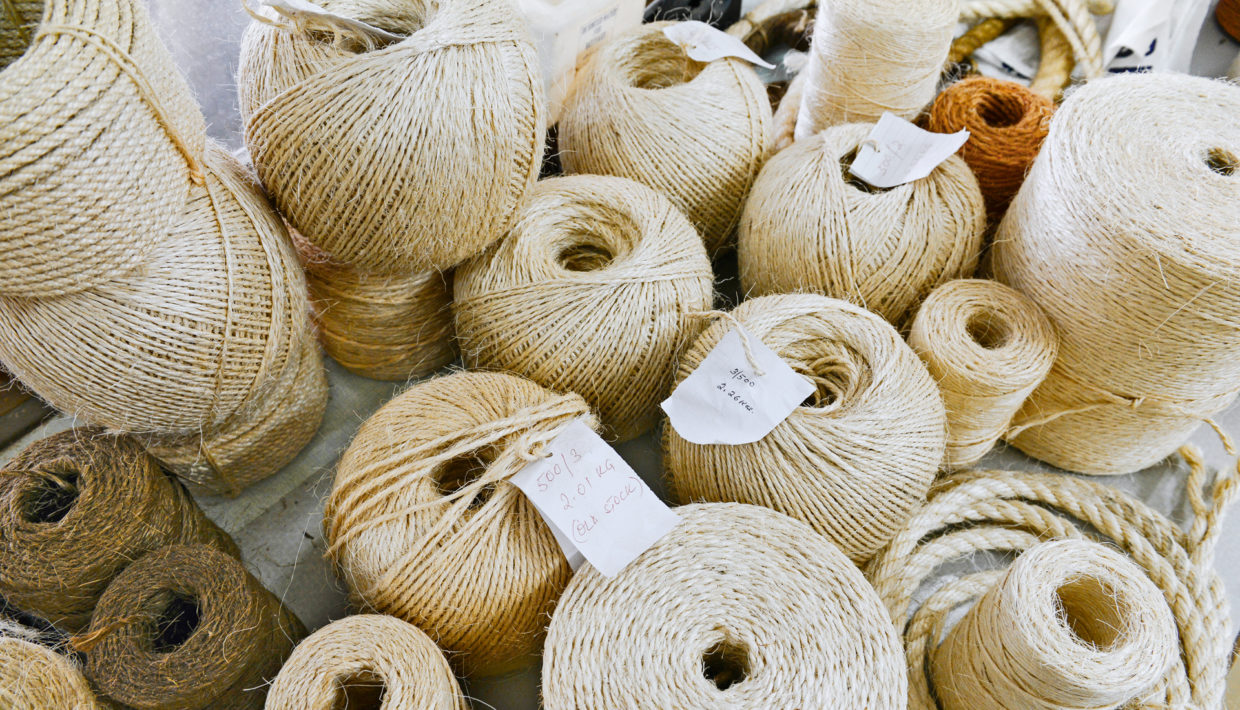 And there is more to sisal than securing large ships to the quay­side – it even serves as fine thread for textiles.

Mean­while, the machines in the factory halls of Tancord (1998) Ltd. are spin­ning and weaving inces­santly on the outskirts of Tanga. “We are producing carpets, mats and ropes,” observes the general manager, Hamisi Maige. “We mainly supply the domestic market but we also export to Kenya, Mozam­bique and South Africa,” Mr Maige continues. “We would love to export over­seas as well. But for that we need inno­va­tion to refine the fibres, which is tech­ni­cally possible, but the convic­tion to invest in research work in this area is clearly still lacking. So we remain at the same level of processing as in the time of Euro­pean colo­nial rule.”

Another impor­tant factor, Mr Maige continues, is that the prod­ucts gener­ating income from sisal cultivation should not be limited to the produc­tion of fibres. “The fibres only account for 4% of the whole plant. In future, we must put the remaining 96% to better use, for example by gener­ating biogas,” he says. “The extrac­tion of active substances from the agave plant for use in phar­ma­ceu­tical prod­ucts is also conceiv­able and, what’s more, agave juice can also be used to brew spirits.”

A journey into the past 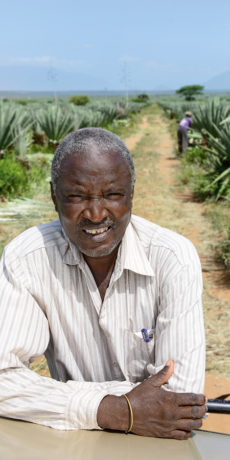 A few hours’ drive inland, south of the Usam­bara Moun­tains on Mr Ruhinda’s Mkum­bara Sisal Estate, the moun­tain peaks are still covered by the morning’s high fog. With the help of many hands, freshly harvested sisal leaves are lifted out from trucks and placed on a conveyor belt which leads directly into the decor­ti­cator (a fibre-strip­ping machine) which is elec­tri­cally driven using large belts. It beats the fleshy lance­o­late leaves with iron mallets. While the sap flows down­wards through a channel, the freshly strung golden fibre emerges from the other side of the machine.

Men wearing old shoes stand in the frothy sap gath­ering bundles of fibres and loading them onto a cart. After defi­bra­tion, women hang the moist fibre bundles on waist-high lines where they fade and dry within hours under the scorching sun. The fibre is then brushed by a machine. At the end of the processing chain, a press compresses the fibrous mate­rial into bales weighing 100kg or 250kg.

Mean­while, dili­gent harvesting is taking place on the plan­ta­tion. A light wind provides some welcome cooler air to about 100 men and women who carry out their hard work in high temper­a­tures. “We harvest around 5t every day,” explains the manager, Khalidi Mgundo, in an area of the plan­ta­tion that is laid out in a square and symmet­ri­cally crossed by paths for trans­port. The manual harvesting is a very precisely planned system. The agave plants are planted in rows which are 2m apart from each other, with a gap of 1m between plants within the rows.

If the soil is supplied with a suffi­cient quan­tity of nutri­ents and water, then a harvest of up to 3t/ha is possible.

Only the expe­ri­enced harvesters know which leaves are already ripe for cutting. One of them is Nuru Waziri, a woman who has been doing this work for more than 10 years. With great skill, she cuts off the spiky leaves, which are about 1m long and arranged in a rosette around the trunk. She works her way along the rows quickly and lays the cut spec­i­mens on the ground between the rows. The second stage in her work is to pick up 30 leaves and bind them into a bundle. She carries this from the rows of plants to the trans­port path, where she stacks the bundles into square piles. A pile is complete when it contains exactly 110 bundles and it then has a volume of one cubic metre. 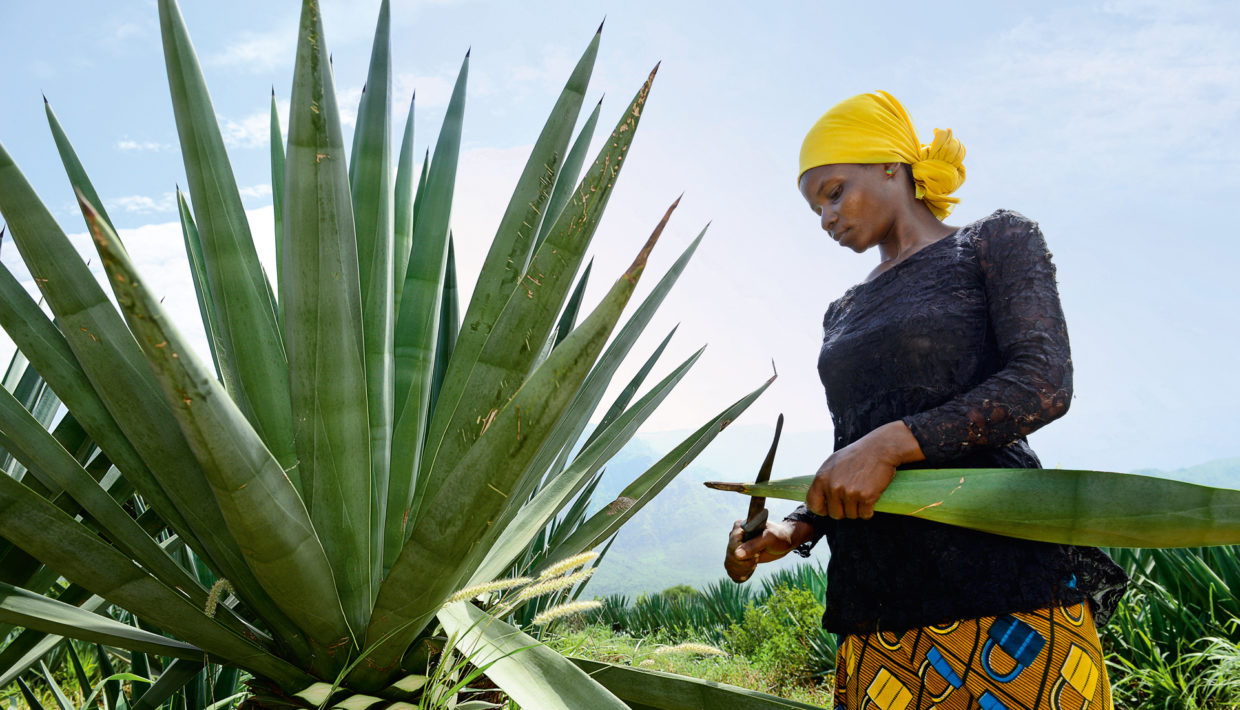 Routine at work – for more than 10 years farm worker Nuru Waziri has been cutting the prickly sisal leaves. 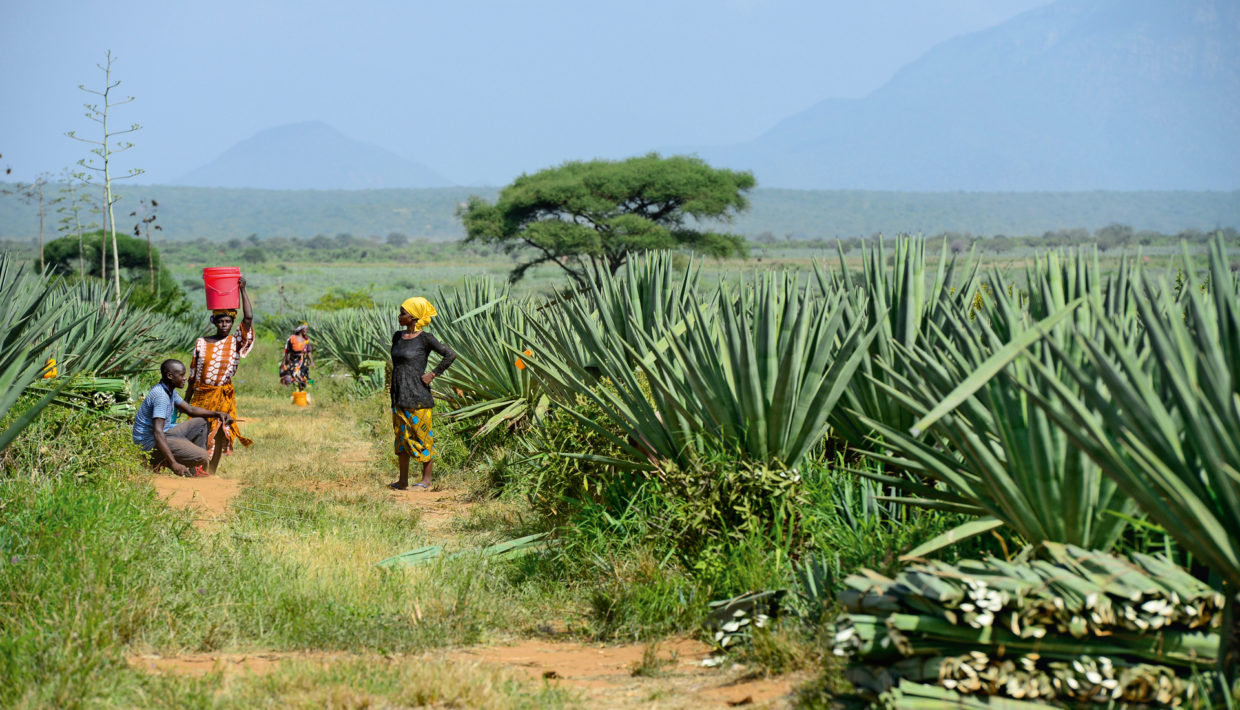 Sisal as far as the eye can see. On the Mkum­bara Sisal Estate plan­ta­tion the metre-high peren­nial fibre plant covers thou­sands of hectares of land. 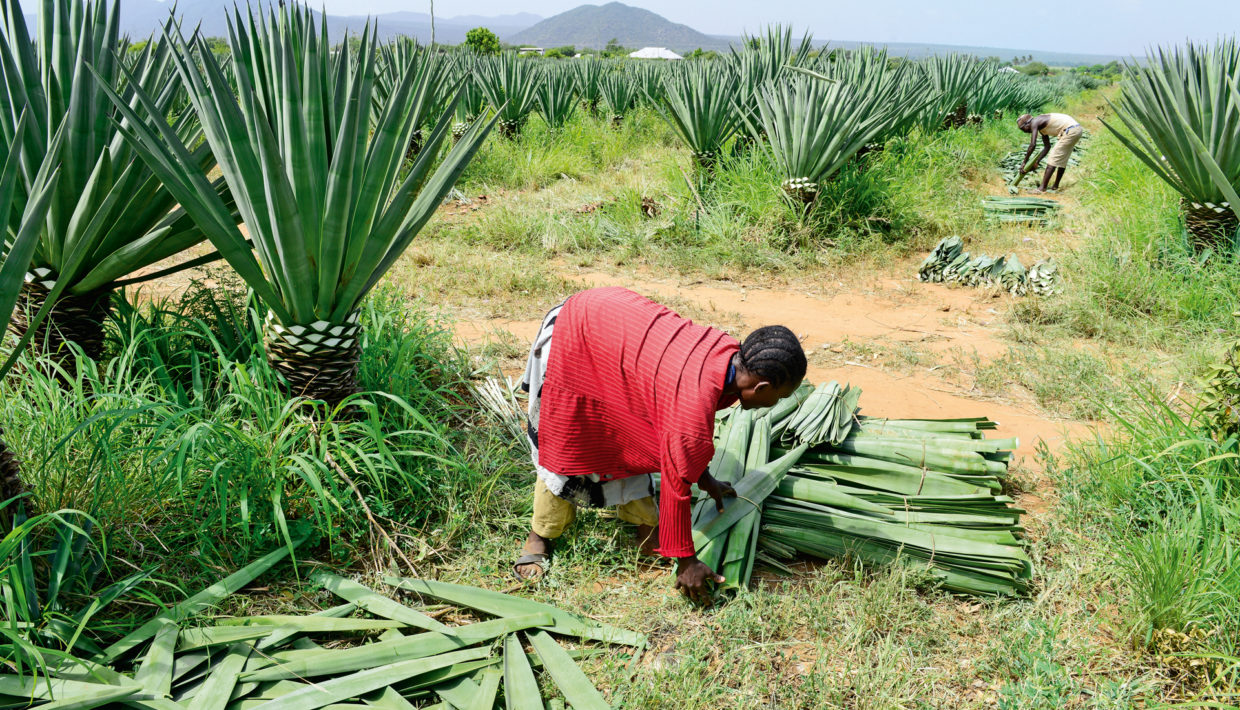 After cutting the long, meaty leaves they are packed in bundles of 30. 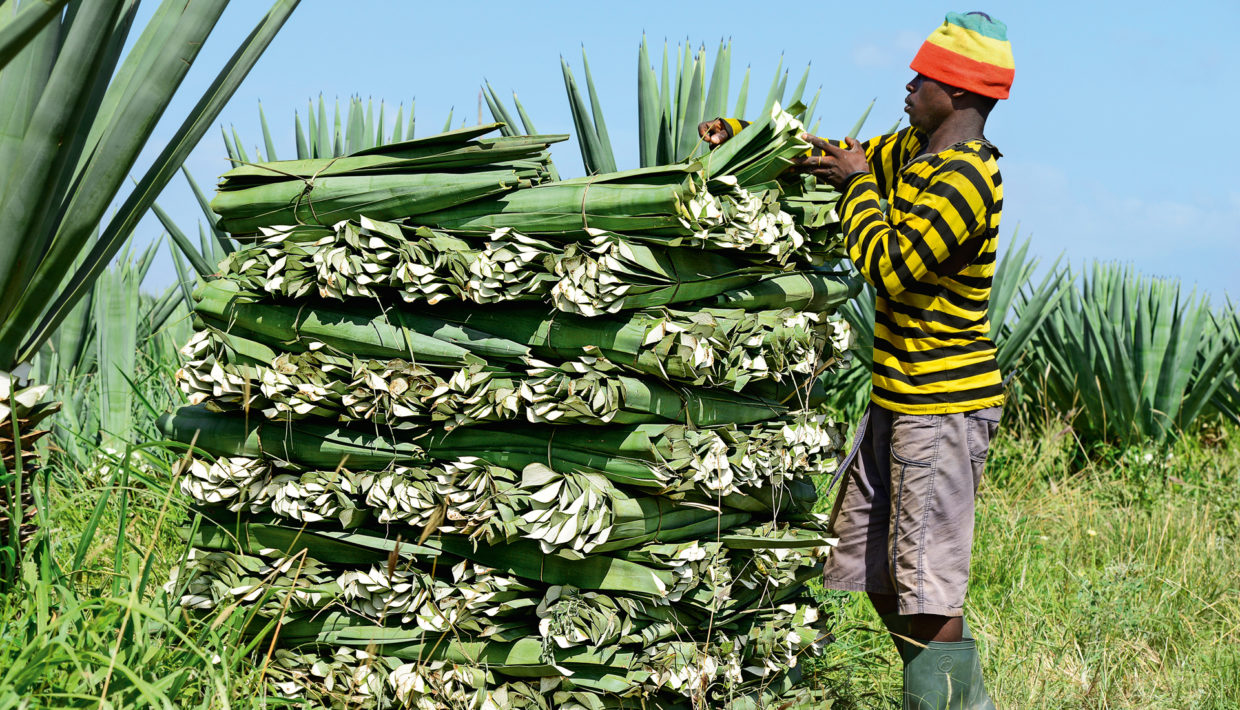 One stack consists of exactly 110 bundles. A tractor-trailer team trans­ports the stacks out of the plan­ta­tion.

The sisal crop from the once state-run Mkum­bura plan­ta­tion has now recov­ered, nearly 25 years after the work on the plan­ta­tion was resumed. However, some of the agave plants are already past their peak yield, which occurs after about 12 to 15 years. They have to be replaced by new seedlings, of which the leaves can be cut for the first time after a four-year growth period. For long-term growth, Mr Mgundo has planted about 200ha with seedlings.

“To date, we have been harvesting about 1-1.5t/ha each year on average,” he explains. “Fortu­nately we haven’t had any prob­lems with insect damage, or fungal or viral diseases, such as Korogwe leaf spot disease, and if the soil is supplied with a suffi­cient quan­tity of nutri­ents and water, then a harvest of up to 3t/ha is possible.” The doors and windows are open. Mr Mgundo desk is in the middle of the room. The daily logs; listing columns of produc­tion figures and weighted down with large shells, are flut­tering in the wind. A picture with symbolic char­acter: Sisal cultivation south of the Usam­bara Moun­tains is expe­ri­encing tail­winds.

Tradi­tional uses for sisal fibres include carpets, door­mats, ropes, cords, cables, nets, bags and yarns. The fibres also have various uses in the construc­tion industry (insu­lating mate­rial, fibre­boards, struc­tural mate­rials for plaster building sections and roof tiles). Sisal fibres are increas­ingly being used to make fibre composite mate­rials as they are lighter than fibre­glass. Fabrics made from sisal are also used for polishing wheels – because they clean but don’t scratch. In addi­tion, owing to its special prop­er­ties, sisal is a useful addi­tive in pulp produc­tion for special papers.

Turkish agri­cul­ture has lots to offer. With prod­ucts such as hazel­nuts, figs or sultanas, Turkey is a global leader in produc­tion. Looking at the whole industry shows an impres­sive variety of prod­ucts, whereas many regions concen­trate on growing only one specific crop.﻿