From hazelnut to cotton

Turkish agri­cul­ture has lots to offer. With prod­ucts such as hazel­nuts, figs or sultanas, Turkey is a global leader in produc­tion. Looking at the whole industry shows an impres­sive variety of prod­ucts, whereas many regions concen­trate on growing only one specific crop.

Blue shim­mering light settles in the early evening over the moun­tains of the Cumayeri region in the Düzce province. Hazel­nuts are thriving wher­ever you look. After several days of rain, farmers have put back the hazelnut harvest again. Another two dry weeks and the harvest will be over in this region by the end of September. To the right and left, you can see workers on the slopes, harvesting from the multi-stemmed, dense and high-growing bushes. Lots of hands are on deck, gath­ering together the hazel­nuts which have fallen onto the humus-rich ground in order to trans­port them to the harvester with a suction device. The Findik Maccina, which means some­thing similar to hazelnut machine, sepa­rates the nuts pneu­mat­i­cally by agitating them away from their brown-leaved shells. Small leaf frag­ments are flung high into the air whilst the hazel­nuts are tossed into the jute sacks. The air smells nutty and earthy.

105 FARMING FAMILIES AND ONE MOSQUE

A gravel path leads to the Ak family’s farm in Üvez­beli. Shortly before, hazel­nuts from a neigh­bouring farm were laid out on some open ground to dry. The small neigh­bour­hood is around 500m above sea level, houses 105 farming fami­lies and has a mosque. Jusuf and his son, Vedat, greet us warmly.
Next to a shed, in front of which there is a tractor and their own Findik Maccina, which the family also uses for contract work at other farms, freshly-picked beans from the garden have been laid out to dry. Behind their house, the wall of which features a large poster of the Turkish pres­i­dent and the roof has a large satel­lite dish, there is a small stable, in which a cow, a heifer, two bulls, and a calf are housed. 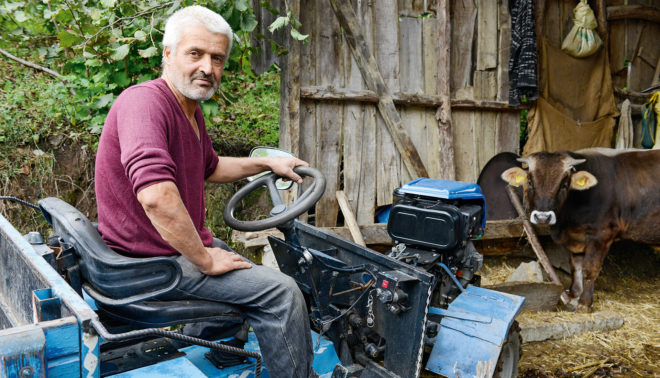 But back to the hazel­nuts. They are the Ak family’s source of income, which is also the case for many thou­sand Turkish farmers in the moist summer warmth of the moun­tainous Black Sea region, which extends for almost 1000km from Düzce to Trabzon. More than 60% of hazel­nuts produced across the world are grown here.
Jusuf’s brother, Mehmet Ak, is also active in this sector. As well as his farm, he also runs a hazelnut collec­tion point oppo­site the mosque. Large jute sacks are stacked in storage. Farmers arrive with trac­tors and full trailers; private producers bring smaller quan­ti­ties. Every sack of hazel­nuts is sampled. Appear­ance, flavour and mois­ture are eval­u­ated here. Mehmet Ak sits happily behind a large desk, drinking tea, and decides on the price.

The village Üvez­beli is located in the Turkish Black Sea region, where 60% of the global hazelnut harvest is grown. 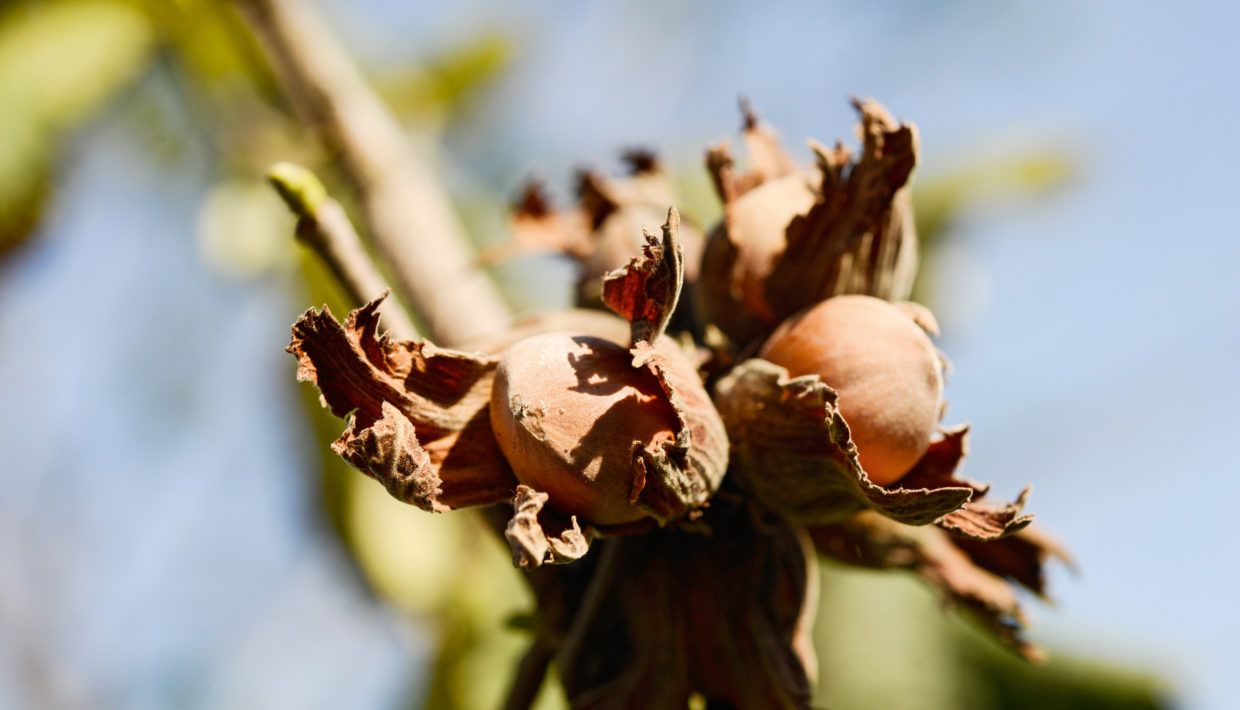 Hazel­nuts from Turkey are popular all around the world. 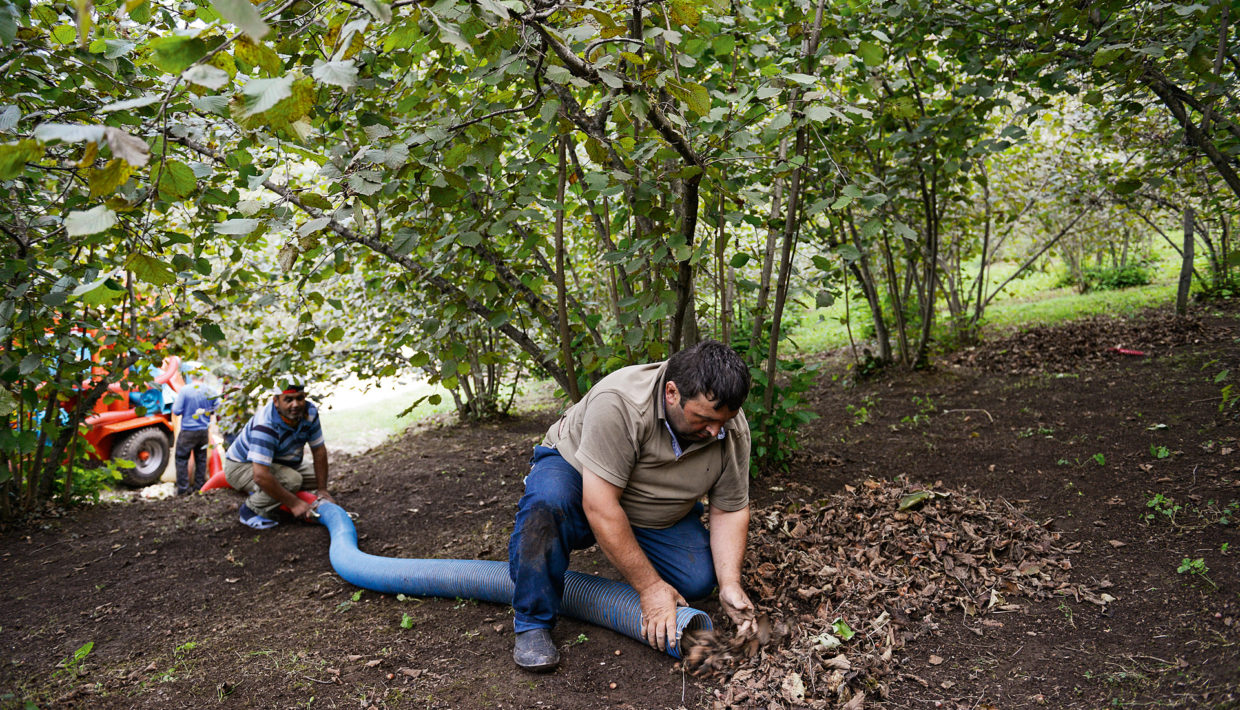 Harvesting with suction pipes: The hazel­nuts are sucked into the mobile harvesting machine where the skin is removed from the nut. 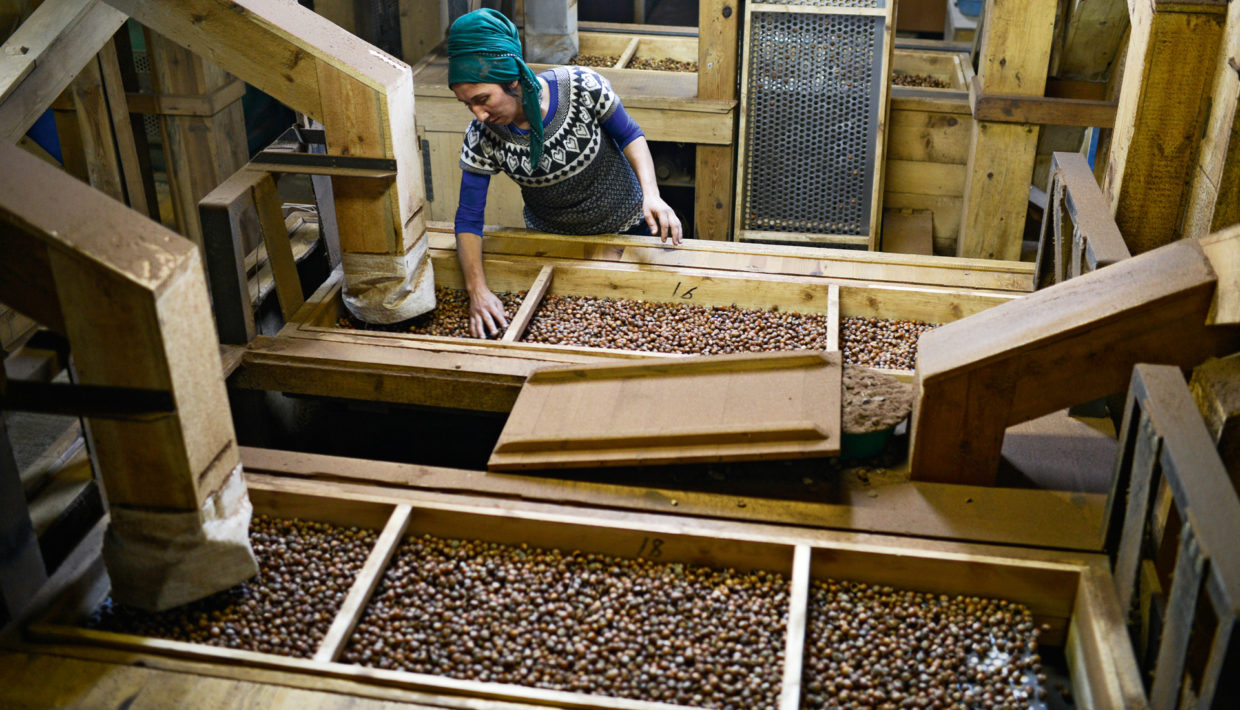 Shaking and sifting: After cracking, the hazelnut is cleaned and sorted by size. 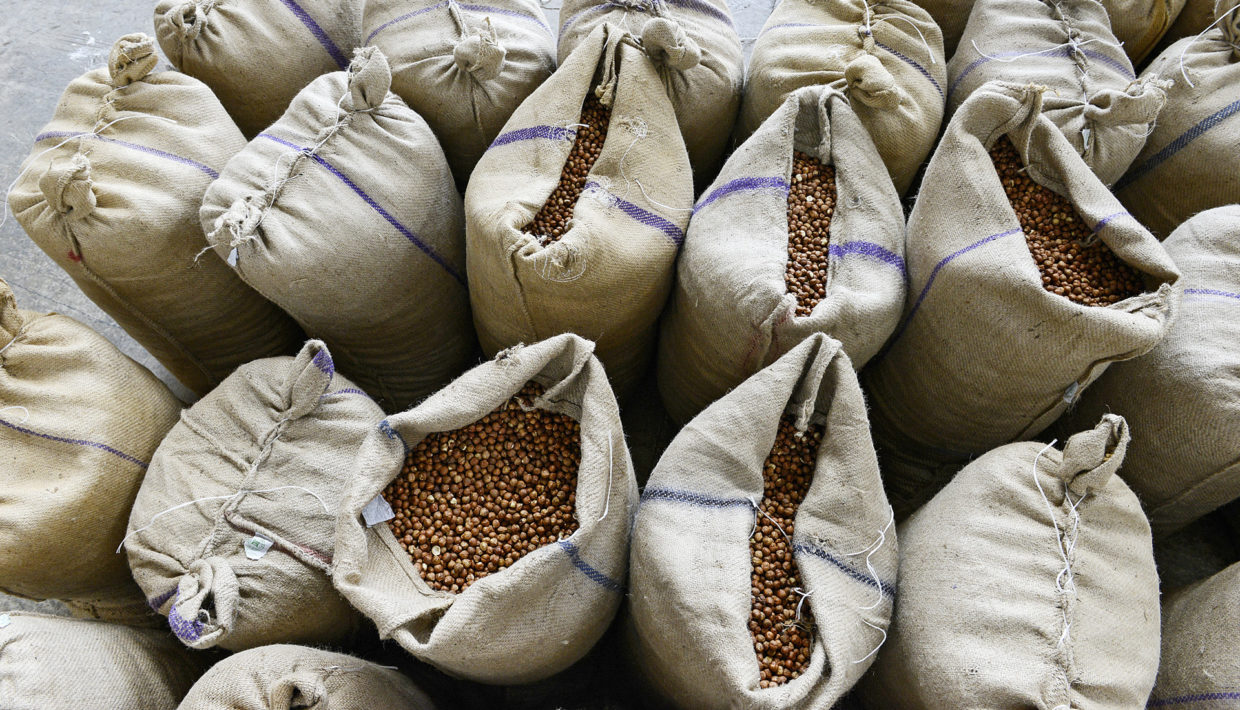 Cracked, cleaned, and packed by size - Hazel­nuts before being trans­ported to retail shops or for further processing.

MANISA IS FAMOUS FOR SULTANAS

Around 600km further to the south-west, in the province of Manisa, hazel­nuts are not impor­tant at all. Here, several types of fruit vari­eties like grapes, cher­ries, peaches, melons, as well as vegeta­bles, spices, grain maize and cotton domi­nate farming in the wide valleys, which are surrounded by snowy moun­tain ranges in winter. Temper­a­tures are higher here than in the Black Sea region, there is much lower rain­fall and not much succeeds without irri­ga­tion. While the cotton harvest starts in October, grain maize is harvested in the surrounding area of Manisa in September. This is the same on Ahmed Havaleoglu’s land. A lorry is waiting at the edge of the field to trans­port the gold-yellow harvest to the mill. Neigh­bouring fields are home to vines and there is a small field for growing melons. The melons were sown by farmer Ismail Keskin from Haci­haliller, which is to the south east of the town of Manisa, into the stubble at the start of July.

By the basket load sultanas are trans­ported from the field to processing loca­tions.

In addi­tion to wheat and pump­kins, Keskin is also planting grapes. The light and seed­less grapes from the sultana vine are used for the produc­tion of sultanas, a special type of raisins for which the Manisa region is famous. The differ­ence between raisins and sultanas lies only in the drying method. In contrast to raisins, sultanas are not dried in the sun for so long. There­fore they have a lighter skin. The lighter, the better. Some producers there­fore dip the grapes in a solu­tion made from potash and plant oil, which dissolves the fine waxy layer on the skin and accel­er­ating the drying process.

Primarily female Kurdish workers spread the harvested sultanas out to dry in the already-harvested wheat and pumpkin fields. After five to 10 days, the women collect the fruits together, which have lost around 85% of their mois­ture and shake them by the basket load into stationary sieving machines, which sepa­rate the sweet harvest from the stalks and leaves. Conveyor belts move the puri­fied sultanas onto lorries, where the harvest helpers share them out with shovels.

WITH MACHINES RATHER THAN BY HAND 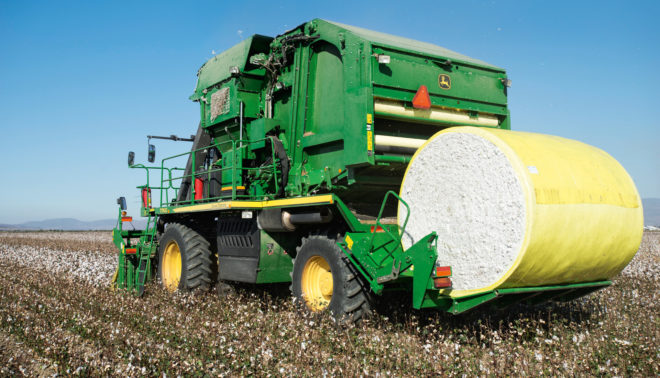 While the produc­tion of sultanas, chilli, table grapes, okra (lady’s fingers) and melons is over­whelm­ingly still cared for by family farms, the cotton sector is controlled by larger enter­prises. In the Menemen area, north of Izmir, lots of cotton is grown. The 26 year-old İlker İyiu­y­arlar runs a John Deere deal­er­ship with his father and uncle, as well as growing 300ha of cotton. Picking by hand, which is still widely prac­tised in the cotton region around the town of Sanli­urfa, 1300km further to the east, was almost completely mech­a­nised here some years ago. Modern cotton harvesting machines are lined up ready to use on their own land, but also to do contracting work.

The cotton is sepa­rated from the seed in their own de-seeding facility. This fetches, continues İyiu­y­arlar “with piles of 28 to 30mm, good prices on the cotton market in Izmir.” He did not go for organic farming “because the stan­dards are high and starting this way of farming would only be worth it if prices were twice as high.”

Organic cotton farming would only be worth it if prices were twice as high.

The crop rota­tion is answering more to the economy than to the fertility of the soil. Only after five years of cotton is another crop planted, which is gener­ally wheat. Even if İyiu­y­arlar chooses to continue his current growing strategy, things will be changing soon in terms of energy supply. The family is plan­ning to build a photo­voltaic system, which will be installed onto a 1.5ha sized area of roofing. “With this, we will be able to take care of a large part of our own energy use,” he says, looking forward to the new era. 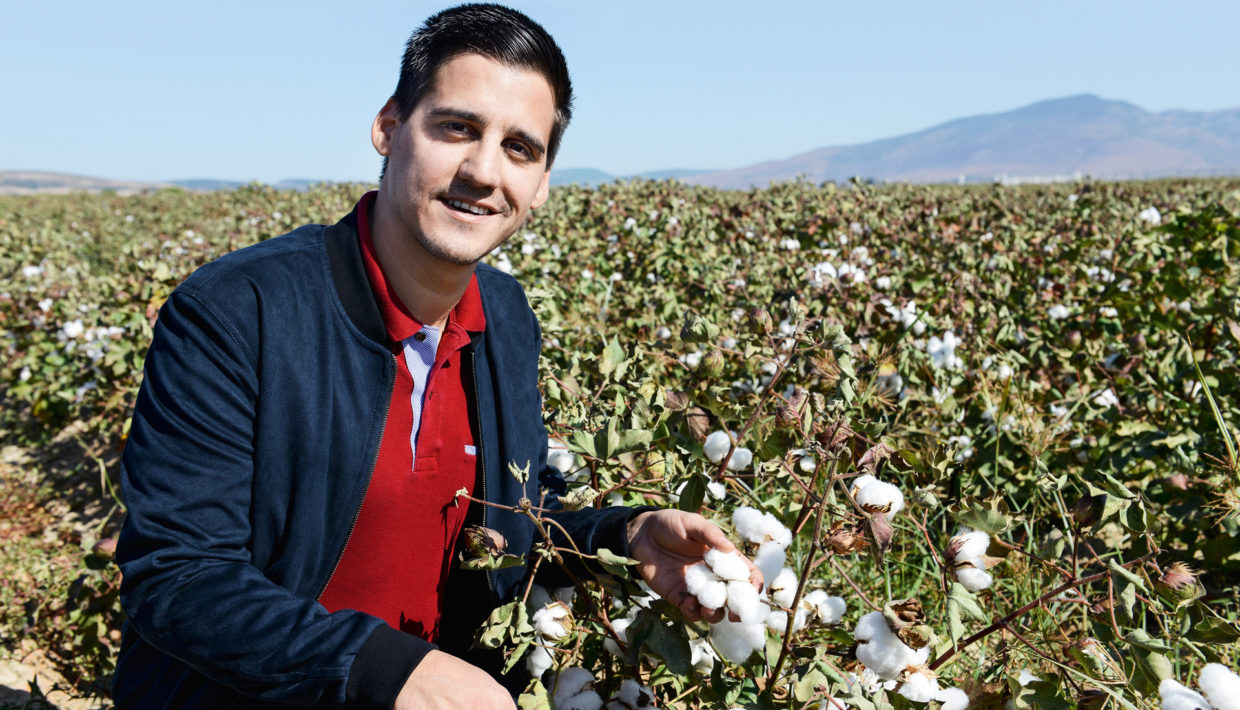 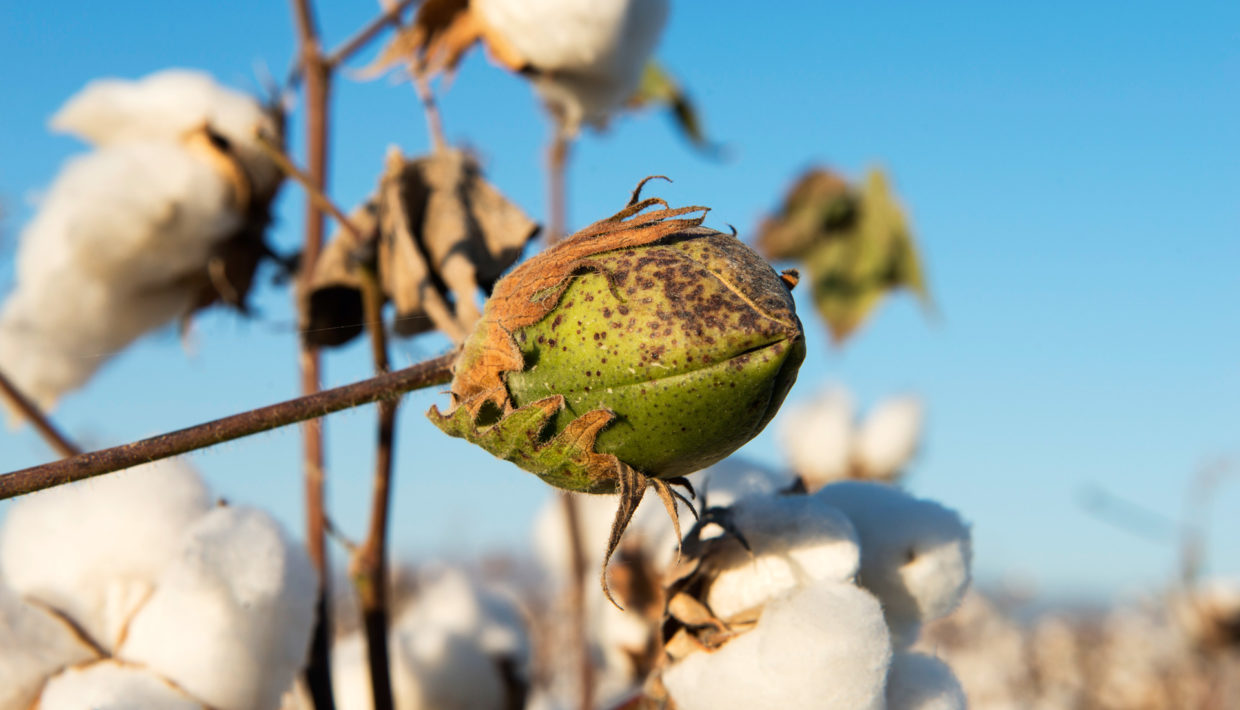 Only when the fruit capsule is ripe and bursts open the cotton fibre can be harvested. 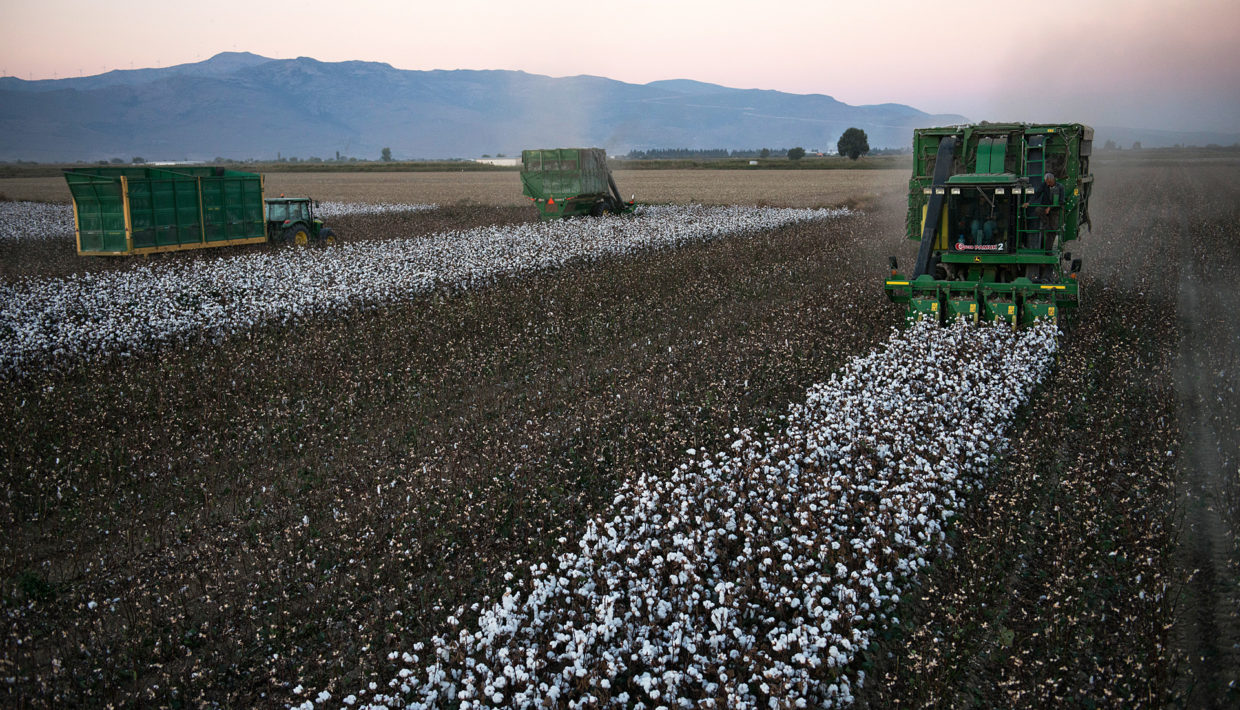 A John Deere cotton picker at work on the fields of Genel Pamuk in the region of Menemen.

Busi­ness people such as İyiu­y­arlar ensure that agri­cul­ture provides a strong economic support for the Turkish national economy. Nearly 25% of all workers find employ­ment in the agri­cul­tural sector, which forms almost 10% of the Gross National Product. However, urban­i­sa­tion is also signif­i­cant here: Now, almost three quar­ters of the popu­la­tion live in towns. Lots of small oper­a­tions do not have someone to inherit the farm and thus there is a very dynamic trend of struc­tural change towards larger compa­nies.

The fatty hazelnut is a perma­nent crop culti­vated over many years. On some Turkish farms, hazelnut fields can date back 80 to 100 years. However, the produc­tivity of the shrubs decreases after 40 to 50 years, which is why many famers dig up their hazelnut shrubs when they reach this age and plant again. The hazelnut requires well-aired and humus-rich soil and thrives partic­u­larly in places which are warm in the summer and moist. Both the weather, as well as the age of the plant, the height above sea level and the variety all influ­ence the produc­tivity of the harvest, which varies from between 400kg up to 3t/ha.

When Russia is mentioned, most people think of cher­nozem soils and vast wheat fields. Few people are aware that buck­wheat reveals a great deal about the Russian soul. This becomes clear at the very latest when you sit down to eat. Because Russian cuisine without buck­wheat is unthink­able. ﻿