Green Energy on the Farm

Methane, biomass, solar panels: there is no shortage of resources on farms for producing energy locally. From Picardy to Provence, things are picking up steam.

Converting waste, byprod­ucts, or biomass into energy to heat build­ings or green­houses is not a new idea, but the improved self-suffi­ciency is still attrac­tive. In the depart­ment of Aisne, the Mascourt farm has chosen anaer­obic diges­tion, on the initia­tive of Sébastien Mascourt, who is passion­ately committed to this project.

“Having already farmed pigs and about 250ac, in 2004 I started thinking about how to sustain the struc­ture of the farm, which I manage together with my sister and brother-in-law. I made a bet on energy tran­si­tion and explored all the poten­tial that there was on the farm. For a pig farm, there are not very many solu­tions besides thermal energy.”

After gaining approval from the local plan­ning authority, in 2014 Sébastien set up his cogen­er­a­tion-anaer­obic diges­tion plant, with a capacity of 250kW. He made the choice to treat the 12,000t of manure from his pig farm to heat the new green­houses that he has built on the farm. Green­houses in Picardy? For growing what? Red berries! The young farmer didn’t hesi­tate: he used about 2.5ac of the land for green­houses to produce 44t of berries a year and recruited 15 people to help with the harvest between April and November.

“By pooling our three activ­i­ties relating to pigs, straw­ber­ries, and anaer­obic diges­tion, we have created synergy effects and large-scale energy economies.”

The farm shop sales are negli­gible, the majority of the fruit going to a commer­cial plat­form in Laon, a nearby town. “I still keep a bit of the direct sale, which allows us to have some contact with customers and explain how we produce the fruit, with prac­ti­cally no treat­ment.”

The project is going well; the farm produces straw­ber­ries for local sales outlets over six months, with seven vari­eties in total. They are grown above ground, with no treat­ment besides essen­tial oils to prevent diseases, and the collecting baskets are weeded by hand. It’s not quite organic, but it’s close. Addi­tion­ally, Sébastien sowed wild plants, like sain­foin and melilotus, around the green­houses to attract bees and other polli­na­tors to the straw­berry plants.

Over half of the green­houses are heated by the anaer­obic diges­tion unit and the hot water that it produces. After two years of oper­a­tion, Sébastien calcu­lates that it will take another five years for the equip­ment to pay itself off. In total, four million euros have been invested over five years and today 22 people work on the farm. 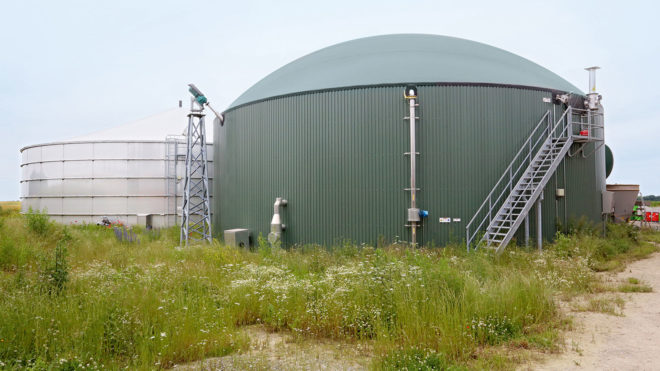 In Picardy, the Manscourt collec­tive farm is putting all its efforts into anaer­obic diges­tion through cogen­er­a­tion, from live­stock manure but also from all sources of organic waste avail­able in the area of the farm.

He already plans to build a grain store on the farm and he hopes to increase his capacity by doubling the number of his live­stock and to convert more manure into fuel. His dream is to triple or quadruple the plant’s capacity and to achieve complete energy self-suffi­ciency. “Today, our three activ­i­ties relating to pigs, straw­ber­ries, and anaer­obic diges­tion are inter­de­pen­dent. By pooling them, we are creating synergy effects and large-scale energy economies.” 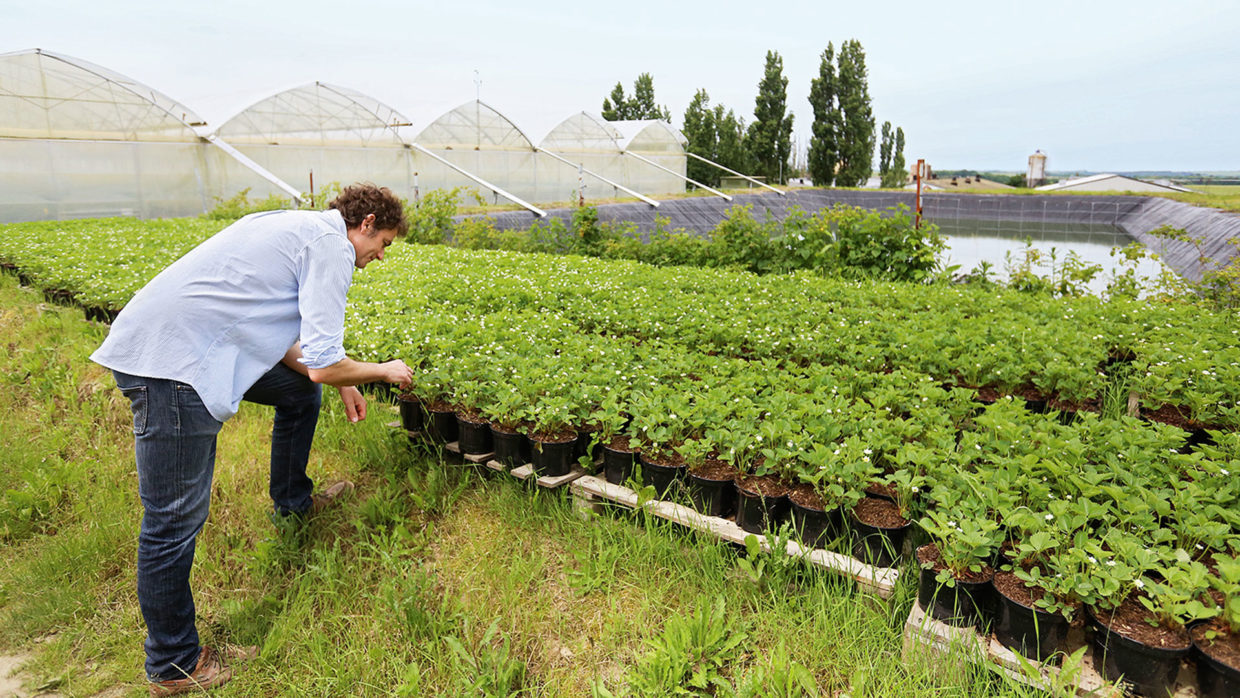 With his passion for producing straw­ber­ries, Sébastien Manscourt breeds the finest vari­eties of the plants himself.

Another energy sector is taking root, and that is miscanthus. One of the latest successes involves heating the Abbey of Ourscamp in Oise with 30ac of the plant produced locally by two farms very close by. The miscanthus supply has been contracted for 15 years. The farmers seeded it in 2015 on plots that were far from the farms and diffi­cult to access, where grain crops were not very prof­itable.

This outlet allows them to diver­sify their activity, secure a stream of revenue and recover the invest­ment in planting rhizomes. The reli­gious commu­nity of Ourscamp has installed its new 400kW miscanthus heating system, replacing the old oil heaters, to heat four build­ings and three houses. This saves the abbey €60,000 per year in fuel and avoids 230t of CO2 emis­sions per year. By way of compar­ison, those are the same emis­sions as 120 new diesel vehi­cles (183g CO2/mi, 9,630mi/year) produce.

Further south in Drôme, Jacques Vail­lant is also exploring every source of energy self-suffi­ciency. This former physics teacher has many ideas that he is trying to get out into the rural world. In Montéléger, he has set himself up on a former farm surrounded by just over 5ac of land. “I have been trying to elim­i­nate my carbon foot­print for 12 years,” he says. All means of doing so are good: insu­lating your home with wood wool, small wind turbines, water heater and solar panels, not to mention planting miscanthus to power a plant furnace.

Anaer­obic diges­tion is a natural process of decom­po­si­tion of organic mate­rial, leading to the produc­tion of biogas, which can put to use in multiple ways:

“Today I have done away with fossil fuel completely by insu­lating the walls and using the miscanthus heather. I planted this grass myself at two feet per square meter. It’s worth noting that this crop is not inva­sive at all. Instead it’s econom­ical, sustain­able, and easy to grow.” Giant miscanthus, also known as elephant grass (Miscanthus gigan­teus) is sterile. And when it is fall, we see pani­cles appear that do not contain seeds: that means it is not consid­ered an inva­sive species.

On Jacques Vaillant’s farm, the miscanthus is grown on just under two and a half acres and is harvested in March when the stems are well dried out. Yield (dry matter) is 4.8 to 5.7t/ac/year on average. Once ensiled, the harvest is stored under cover, before going straight into the boiler, supplied by an auger. 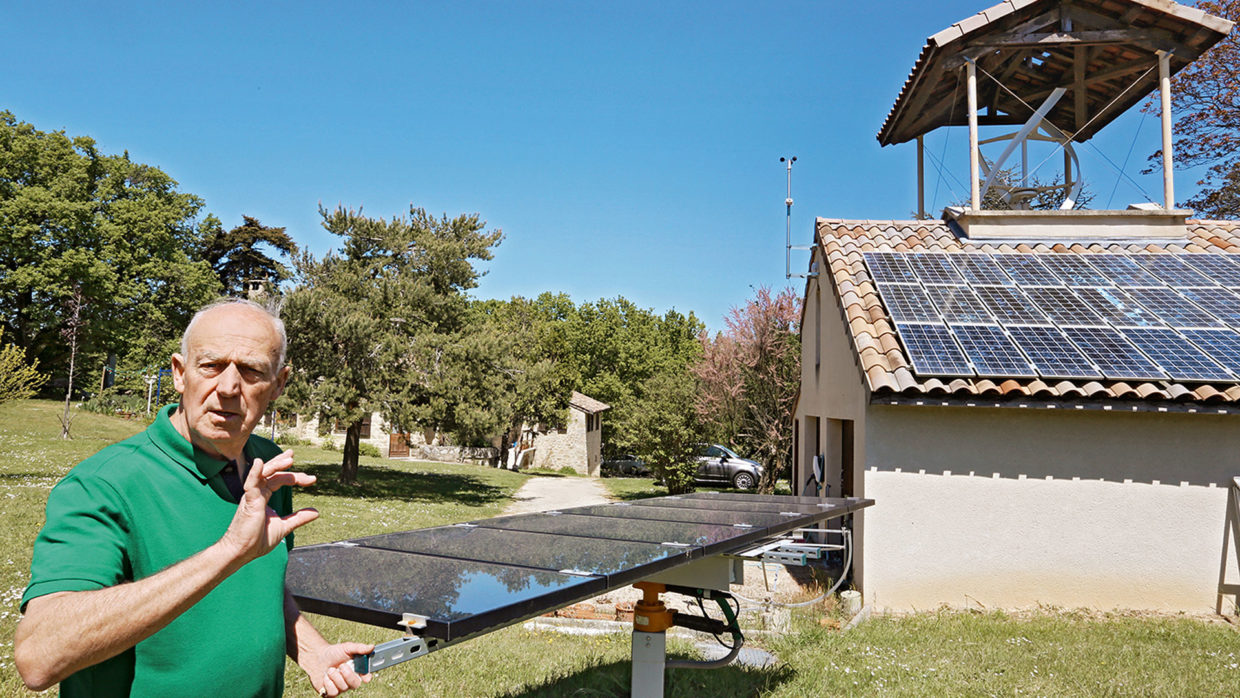 All renew­able energy is worth using. Jacques Vail­lant tests different types of solar collec­tors on the roofs of build­ings: 10sq.ft. of sun in Drôme produce around 1kWh. 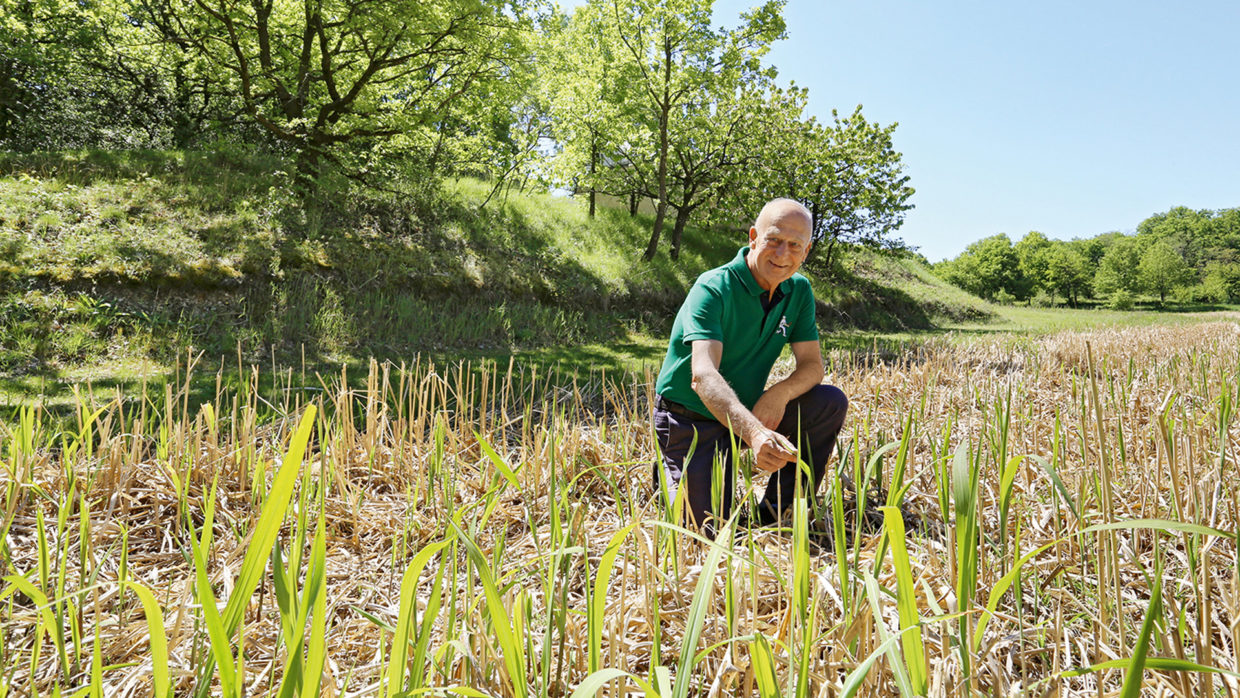 According to Jacques Vail­lant, miscanthus is a sustain­able crop that provides a renew­able source of fuel in most climates, for example here in the Rhône-Alpes region.

Jacques Vail­lant regrets not having found a suit­able boiler in France. In the end he imported it from Austria. “This agri­cul­tural boiler allows us to burn any primary agri­cul­tural mate­rial. All we need to do is make a lining, since the acids produced by the combus­tion attack the internal surfaces. The clinker also has to be elim­i­nated with a grille. Finally, the quan­tity of air needs to be care­fully regu­lated by an oxygen probe placed at the exhaust.”

Always willing to share his expe­ri­ence, the retired teacher has set up an asso­ci­a­tion in Drôme in order to promote the benefit of miscanthus for housing. “I think that with a little over an acre of miscanthus, anyone could heat their home. And a farmer can also use it to run his drying facil­i­ties and build­ings”, he adds. “We need to move to renew­able energy and for everyone to manage to limit their carbon emis­sions to less than 2t/year… other­wise our world is headed for disaster!”

There are multiple upsides to dry-harvested miscanthus: