Returning to the new normal one step at a time

They often occur without warning and tear life apart at the seams: Major crises. The Hübl family – a farming family from the Black Forest in Germany – had such an expe­ri­ence when a fire destroyed most of their prop­erty. Strong commit­ment and unex­pected help carried them through the cata­strophe.

At the entrance to Buchhof, a tiny village near Horb am Neckar, it is surprising to see the modern facade of a house that is still unin­hab­ited. It seems strange in this rural setting. The owners also find it odd. They never would have exchanged their old house, into which they had poured such heart and soul, for this new one. But a fire in the summer of 2019 changed every­thing: Within a few hours, the Hübl family’s farm equip­ment, barn and home burned to the ground.

The farmers and their three chil­dren had to leave their home behind. What remained was a lot of work. 80ha of arable land and 70ha of grass­land still had to be culti­vated. The 500 laying hens, 150 dairy cows and their offspring also had to be looked after. But the family also gained some­thing from this: The assur­ance that they could count on others in times of need.

Machines, house and grain store were in flames

It was the first day of the 2019 grain harvest. The chil­dren were playing in the garden or were out in the field with the adults. Fred­erik, the middle son, spotted the fire in the straw. Thomas Hübl has to swallow the lump in this throat when he thinks about how his son called out to him. Shortly after­wards, Thomas and his wife Diana stood power­less before the flames. 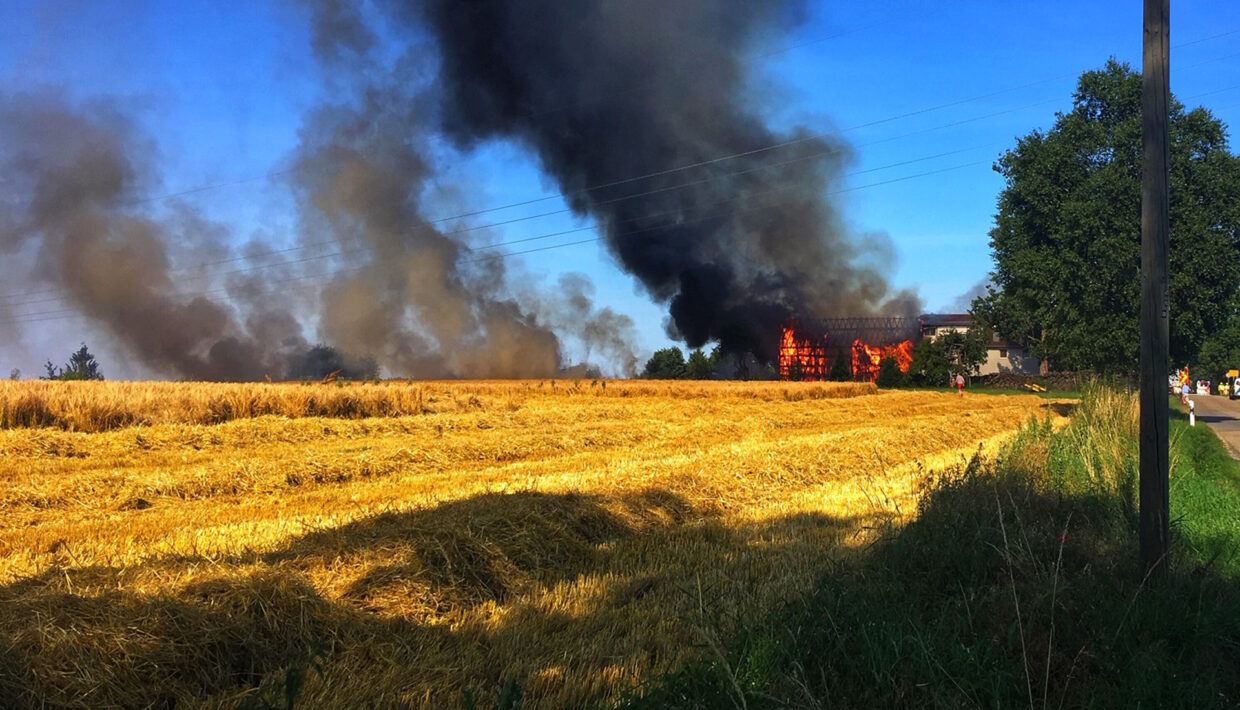 The column of smoke could be seen for several kilo­me­tres. 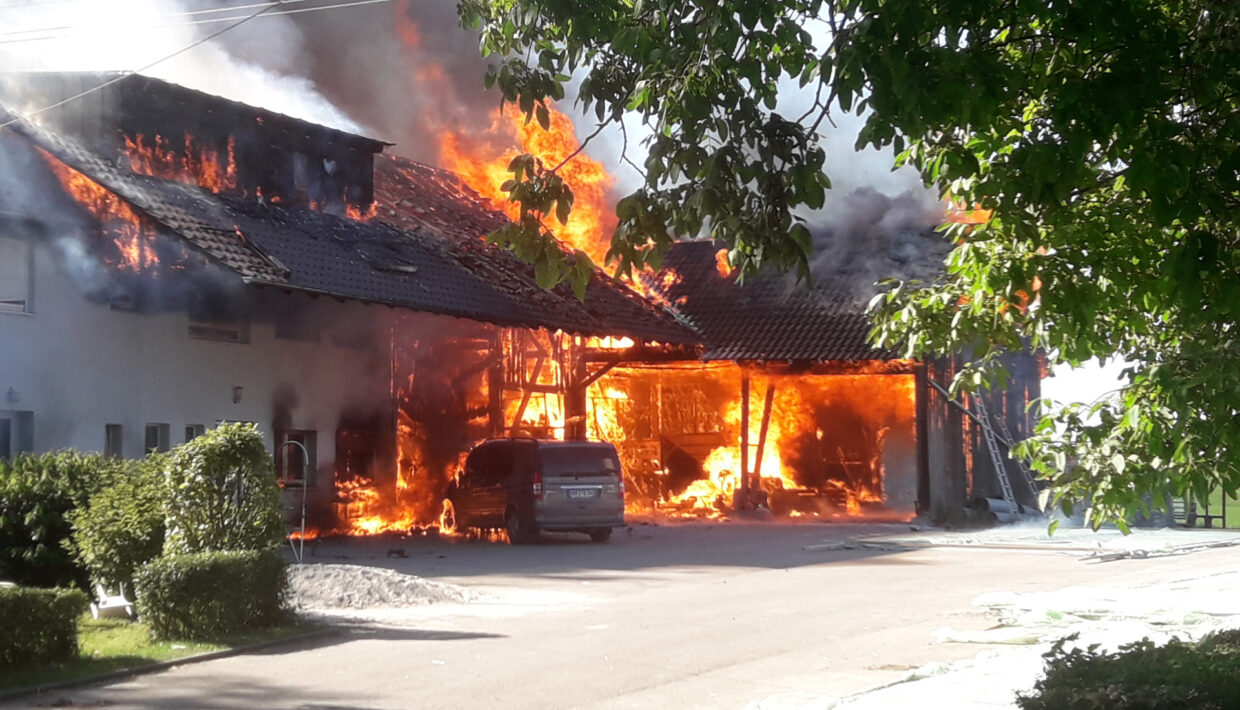 The grain store and the agri­cul­tural equip­ment... 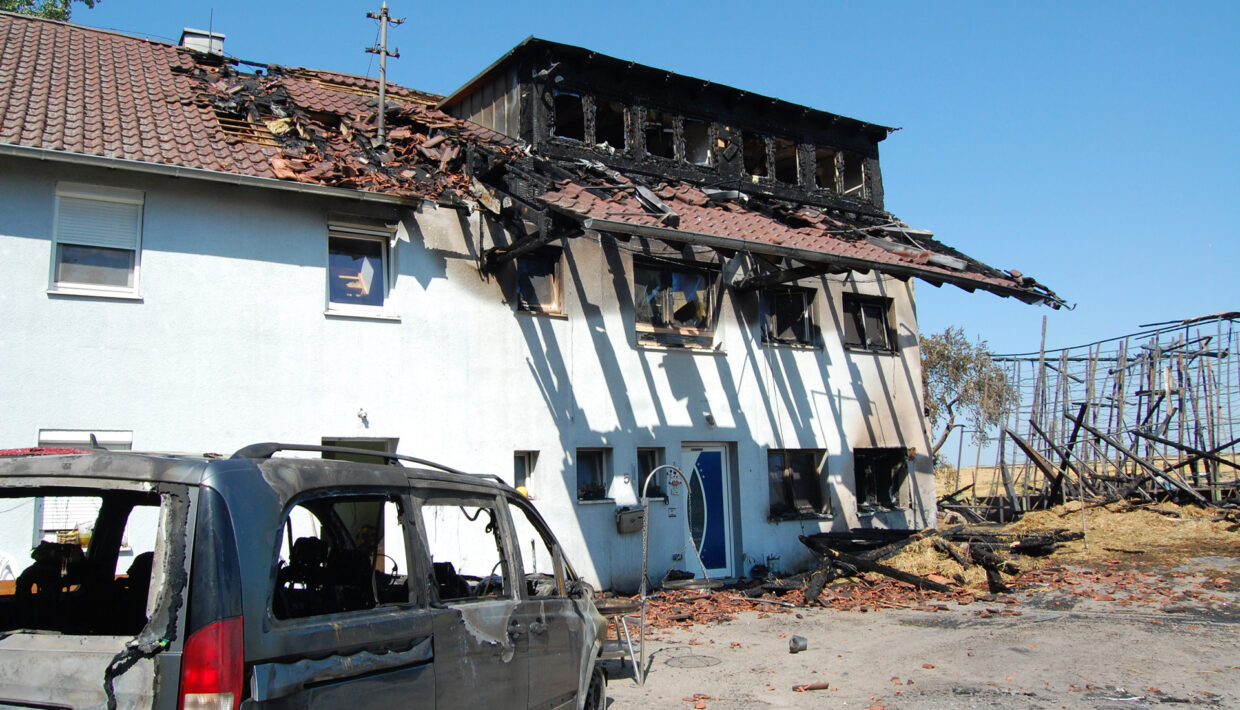 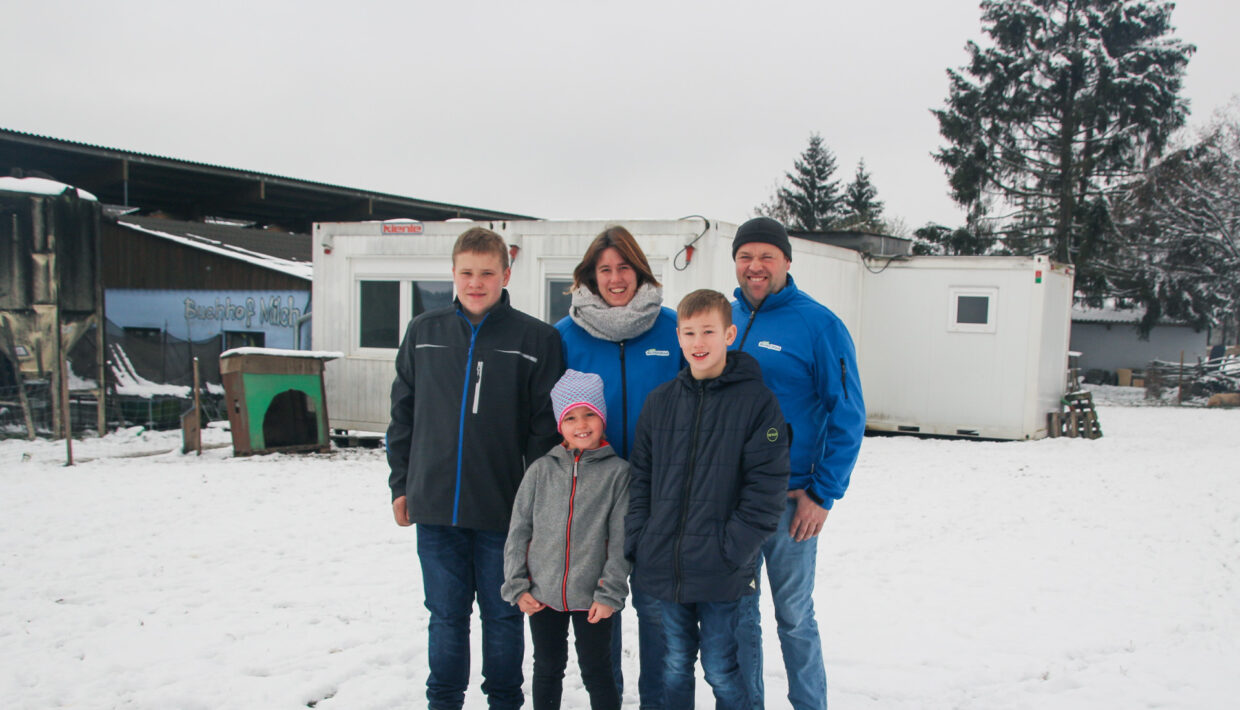 A porta­cabin right next to the cowshed bridges the time until the new house is built.

The firemen arrived just seven minutes after the emer­gency call. They were unable to prevent the house, the grain store and the agri­cul­tural equip­ment from falling victim to the flames. Car tyres were exploding in the heat. What a disaster. ”I almost went crazy,” recalls Mrs Hübl. They were at least able to save impor­tant docu­ments from the burning house.

Soon the newly harvested barley field behind the barn caught fire. One of a cousin’s sons was still busy combining there. With pres­ence of mind, he quickly drove the combine to the other end of the field and fetched the plough. He then ploughed back and forth across the field. ”A police­woman was contin­u­ously stop­ping him in the process,’, Mrs Hübl recalls. ”He shouldn’t have been driving around in the fire. But he knew what he was doing. So he continued to drive it around to stop the source of the fire.”

The full extent of the damage was revealed the day after the fire broke out. The grain store, including grain cleaning and drying equip­ment, was completely burnt. Front and rear mower decks, rakes, bale wagons and fork­lifts, along with many small devices, had to be disposed of. The family car and a quad bike were also gone. During this diffi­cult time, the agri­cul­tural machinery manu­fac­turers helped out with loaned equip­ment so that the farmers could continue to run the busi­ness.

Although the house was still standing, it could no longer be saved. The Hübls were over­whelmed. In addi­tion to the usual farming busi­ness, they now had to deal with the insur­ance company and the processes that follow. A friend’s father recom­mended a profes­sional adviser who would take care of the insur­ance process in the inter­ests of the family. A good invest­ment with an esti­mated damage of almost €1m.

Help from all sides

One good idea was having the pastor who, at the request of the farming couple, assisted the grand­par­ents and chil­dren in partic­ular. ”Many people feel hesi­tant to use this service. But it is really good,” affirms Mrs Hübl.

Rela­tives and friends took over many tasks as a matter of course to relieve the family. One of the friends opened a dona­tion account on the night of the fire. The daughter’s kinder­garten donated clothes, and the oper­ator of a mill donated basic cooking equip­ment. ”I never thought that we would have such strong support in the commu­nity and that there would be such great sympathy,” says Mr Hübl.

We had a lot of sympathy and strong support from friends and helpers.

The eldest son’s class organ­ised a big cake sale. ”The teacher told me that she had never seen the students like this – how they all stuck together. Everyone tried to give their all to help us,’, recalls Mrs Hübl.

Friends and helpers pitched in

Friends and helpers even finished combining the barley. They were even able to bring the straw dry from the field. ”They did all that for us,’, the farmer says, still touched. In the begin­ning, the couple often felt they had no strength left. But the fact that so many people supported them helped them to stay strong during the crisis.

Back to the new normal

For the first few weeks after the fire, the family split up to stay with rela­tives. At some point, however, it was time to look for a new place to stay. The Hübls wanted their family life back. They no longer felt at home anywhere. Mrs Hübl wanted to eat together with her family at the same table again. ”And maybe a flower to go with it,’, she says. So she came up with the idea of renting a porta­cabin that would fit next to the cowshed.

Today, on this cold winter day, Mr and Mrs Hübl are sitting in the kitchen of their porta­cabin. Here, the flair of a construc­tion site is combined with a living room atmos­phere. Cold white recessed lights illu­mi­nate the flower arrange­ments on the table and the grey-blue floor. The huge Christmas tree defies the sparse ambi­ence. Children’s colourful draw­ings are hung on one wall, and family photos on another.

Rela­tives donated supplies for the porta­cabin, and a furni­ture store donated mattresses. ”There were so many people who were worried,” says Mrs Hübl, over­whelmed.

To this day, the cause of the fire is still unknown. It wasn’t until four months after the fire that the family received a small advance payment from the insur­ance company. The fire set the farm back by about five years. They were still lucky: They had sold the grain from the previous year just a few weeks before the fire. But they would now have to invest – in a new grain store, for example. The new plans are already in place, but the insur­ance company is still processing the claim. This is not uncommon: It can take up to two years to pay out. 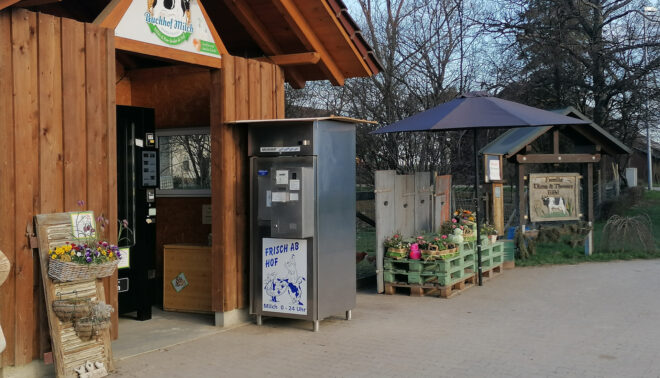 Farm shop for pota­toes, eggs, milk, canned sausage, pasta and flowers – as a result of the Corona pandemic, busi­ness is booming.

Crowds of customers directly at the farm

Despite this gruelling situ­a­tion, the family is not wallowing in self-pity. Instead, they are eager to help others in need. After all, unity is not a one-way street. For example, a florist from Nord­stetten had to close her busi­ness during the pandemic. At Easter and Christmas, she was allowed to supply flower arrange­ments and bouquets right next to the farm shop, and thus bene­fitted from the wave of customers during the pandemic.

The Hübls are also known in the village because they are involved in the fire brigade, the fool’s guild, and the marksmen’s and sports clubs. And also, of course, because their three chil­dren go to school. Never­the­less, they never would have dreamed that they would be so well known. The couple agree that it would have been very diffi­cult without outside help. ”It gave us psycho­log­ical support,” says Mrs Hübl. A family busi­ness also brings people together.

Larger range in the farm shop

Despite the uncer­tain finan­cial situ­a­tion, the Hübls are already making plans to sell a larger range of prod­ucts in their farm shop. So far, they have been selling pota­toes, eggs, milk, canned sausages and pasta. As a result of the Covid pandemic, busi­ness is booming. Eggs are constantly sold out. That is why expanding the chicken coop is in the works – that is, only if the insur­ance process finally comes to an end. 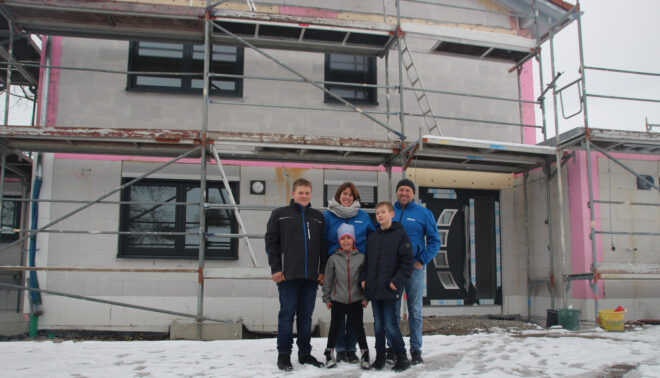 The Hübl family wants to get back to normal everyday life as soon as possible. Having your own house is a big step in the right direc­tion.

Even the new resi­den­tial building is already in place. It was built by a construc­tion firm and still feels strange. The Hübls had built much of the old resi­den­tial building them­selves. But there was no time for personal contri­bu­tion. ”We want to live in a house again as soon as possible,” empha­sises Mr Hübl. What’s missing now for a really good feeling about moving in is a clear state­ment from the insur­ance company.

But the silver lining is approaching. And until then, the family is recharging their batteries and regaining energy with rela­tives, acquain­tances and friends. ”Others go on vaca­tion in the summer,” explains Mrs Hübl. ”But our unity is worth much more than that! Nobody can take that away from us.”

As soon as the Covid situ­a­tion allows, the family want to have a big party to cele­brate this unity: For the fire­fighters and all the other helpers. ”Everyone should see that we’re doing well and how impor­tant mutual aid is.”

Check insur­ance poli­cies every few years. Often, the stated values for build­ings and the like are no longer correct. It is also helpful if the insur­ance covers costs of external experts or special­ists. Ideally, the insur­ance should cover more than just one year of oper­a­tional fail­ures, break­downs, down­time and other losses. This is because it can take a long time before the insur­ance pays out, and the business’s hands are tied for this period.

During the corona crisis, farmers are seizing the oppor­tu­nity to open up new busi­ness areas. We have collected three exam­ples from three coun­tries.﻿

The tradi­tional free­hold is no longer the only form of owner­ship in Danish agri­cul­ture. One alter­na­tive consists of the Go-Gris I/S part­ner­ship in eastern Jutland, which is owned in equal shares by three young and two senior farmers.﻿