High welfare pig produc­tion isn’t always about free-range systems. With growing demand for ethi­cally produced but inex­pen­sive pork, high welfare indoor systems could be the way forward for the industry.

This article was first published in “The Furrow” in April 2016.

The modern consumer is a demanding one. We want top quality food, produced to the highest welfare stan­dards, at the lowest possible price. For today’s farmers, that presents a consid­er­able chal­lenge. But one pig producer in Dorset is striving to meet those demands, and has found a system that could be rolled out across the industry.

Robert Lasseter cut his farming teeth producing outdoor pigs in the rolling green hills made famous by Victo­rian novelist Thomas Hardy, author of Far From the Madding Crowd and Tess of the d’Urbevilles. “I bought a small herd of pigs and was selling 70kg porkers off a few rented fields,” he says.

But outdoor pigs did little to enhance this Dorset idyll, turning the green fields into muddy brown deserts popu­lated by corru­gated tin arks. “I could never answer the ques­tion: Why keep a wood­land animal that likes damp shady condi­tions in an open field where the only shelter is a tin hut?” 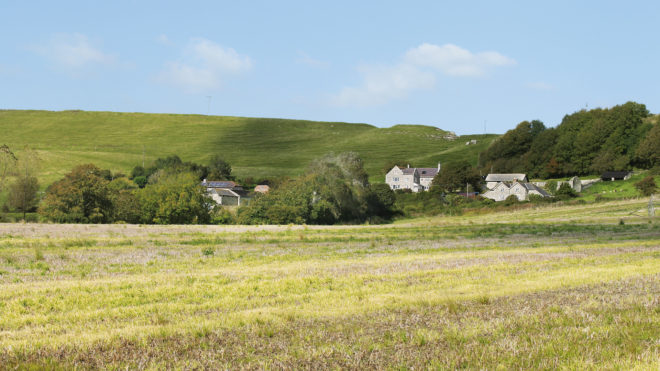 Corton Farm is based in Thomas Hardy country, which looks pret­tier with its green fields than muddy outdoor pig ranges.

So in 2007, when Mr Lasseter moved the herd to Corton Farm at Friar Waddon, he became one of the UK’s few indoor pig producers approved under the RSPCA’s Freedom Food scheme. This paid him a 7p/kg premium for pork produced to high welfare stan­dards – and since then he has contin­u­ally devel­oped and honed his system to maximise produc­tivity, prof­itability and pig welfare.

In 2014 Mr Lasseter made his biggest invest­ment yet – and if it catches on it could trans­form the lives of millions of pigs each year. After inten­sive research and study tours, he decided to replace his farrowing crates with new farrowing pens that provide a far more natural envi­ron­ment for the sow and her piglets and meet the RSPCA’s upgraded stan­dards.

“To me, it’s the differ­ence between caged hens and those in a colony system,” he says. “I don’t like the idea of moth­er­hood behind bars: The inter­na­tional pig industry is coming in for a lot of flack, and I think we need to change the way we farm.”

Farrowing crates were first intro­duced in the 1960s as a way to reduce piglet mortality. Although extremely effec­tive, Mr Lasseter believes their days are numbered, as newer free farrowing systems offer a higher welfare alter­na­tive. 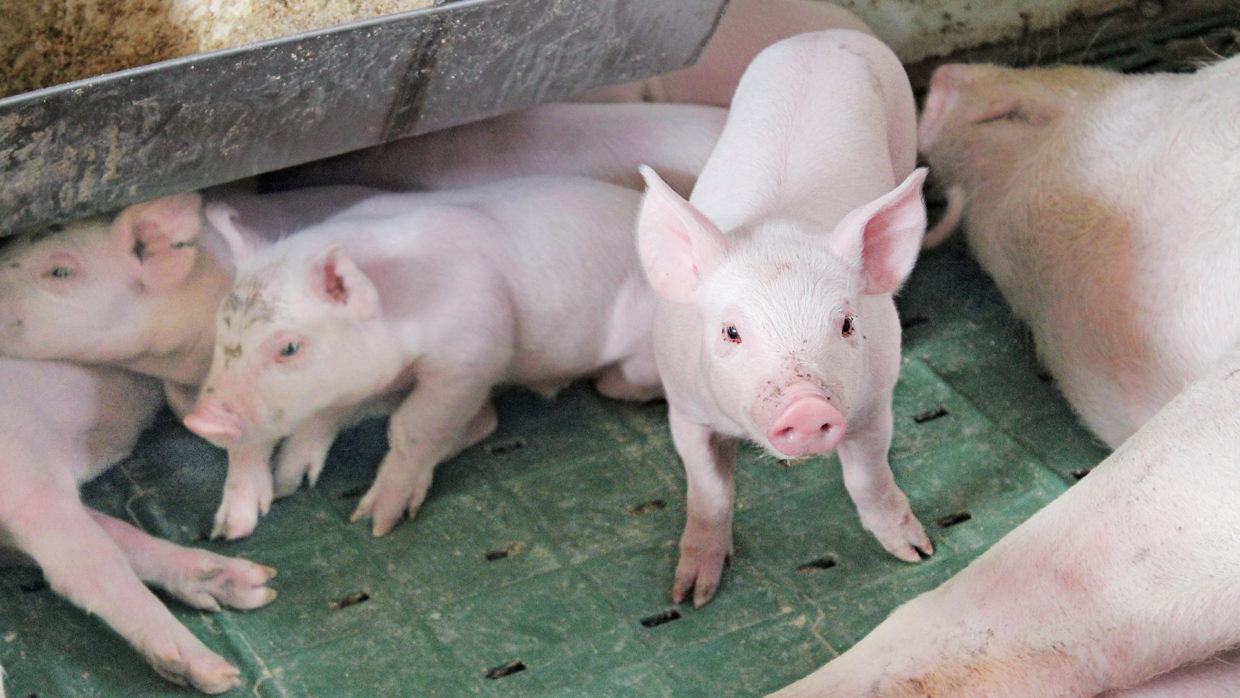 Free farrowing could be the system of the future, allowing sows to express natural behav­iour while protecting the piglets.

“I went to look at a number of different free farrowing systems, and learnt a lot from the pioneering farmers’ successes and mistakes,” he says. “Even­tu­ally we trialled 18 360° pens in an existing Finrone building, and after a few improve­ments invested in two batches of 26 pens.”

A major advan­tage of the 360° pens, from the farmer’s perspec­tive, is that they fit on the same foot­print as conven­tional crates. However, the floor may need to be replaced to ensure it’s strong enough to support the sow, as – unlike in crates – she has the space to turn around, move about and exhibit more natural behav­iour.

The pens have sliding bars that offer protec­tion to the piglets, as well as heat mats and an area for creep feed that Mr Lasseter designed himself. Open grids mean the sows and piglets can see their neigh­bours, while a lever-oper­ated crush can isolate the sow for any manage­ment required.

The pens are bedded with shredded paper over the slatted floor, with ad-lib food provided through manual feeders. “It’s been a really steep learning curve, but we’re now weaning the piglets an average of 1kg heavier at 26 days, which should mean we can finish them at least a week earlier,” he says. 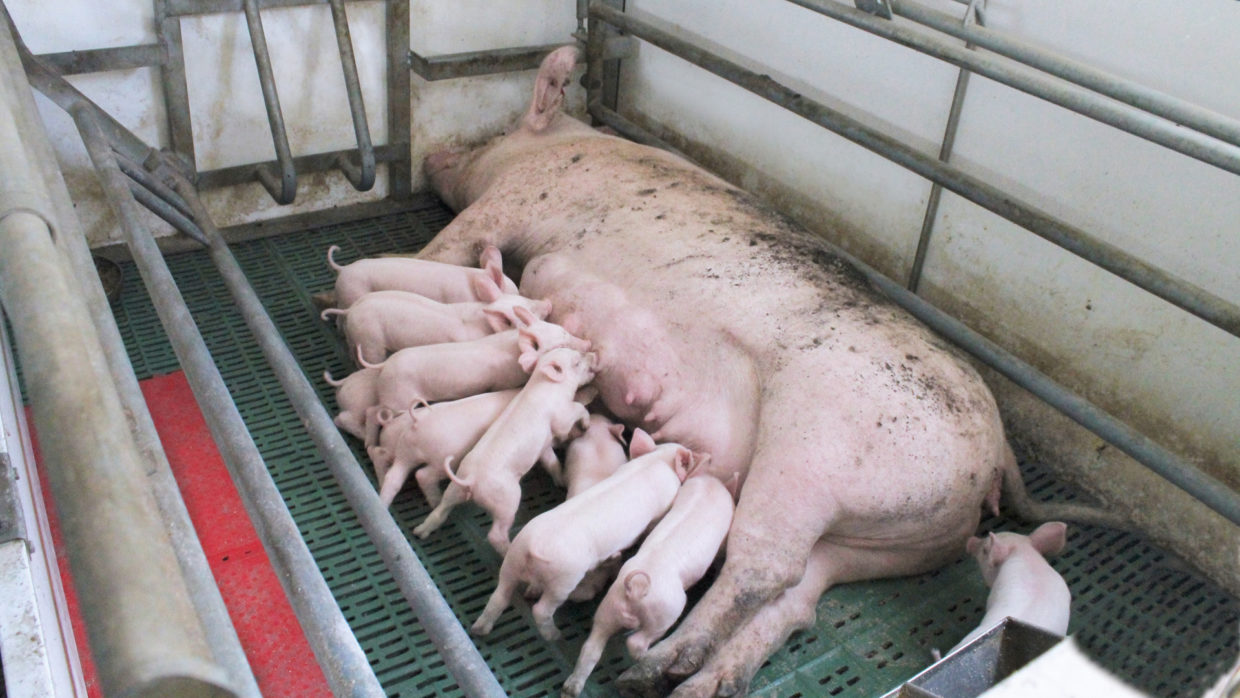 Weaning weights have improved signif­i­cantly as the sows are happier and the piglets have better access to their teats, boosting milk yields.

Mr Lasseter attrib­utes the heavier weaning weights to the sows being more relaxed and the piglets having better access to their teats. “Happy animals do better. I think the piglets are suck­ling more, which is making the sows produce more milk. The sows are eating a huge amount more and really seem a lot happier.” He is also working with the AHDB levy board and research facility FAI Farms on trials using CCTV for the Co-op super­market to study best prac­tice and sow behav­iour in the 360° pens.

Because the pens are more spacious, the staff can get in with the sows and piglets, rather than having to do every­thing behind bars. “That’s really initi­ated a rela­tion­ship with the sows that we didn’t have before. They’re very quiet and don’t see us as a threat, which is really impor­tant.”

I think the whole industry will be moving to free farrowing in the future – the 360° pen is the most impor­tant devel­op­ment since the farrowing crate.

Working indoors is also far nicer than dealing with the change­able British weather, he adds. “Although we’re short of labour right at the moment, we’re all a lot less stressed. Working with the sows now is a real plea­sure.”

The sows remain in the pens for 26 days after farrowing, after which the piglets are weaned and moved into a converted cattle shed. As they grow they are moved again into straw-bedded pens housed in a large general purpose building, before being finished at about 80kg dead­weight. Mr Lasseter keeps replace­ment gilts in groups, and uses Regu­mate to synchro­nise them before arti­fi­cially insem­i­nating them. “We’ll AI them twice and then turn them out with a boar.” 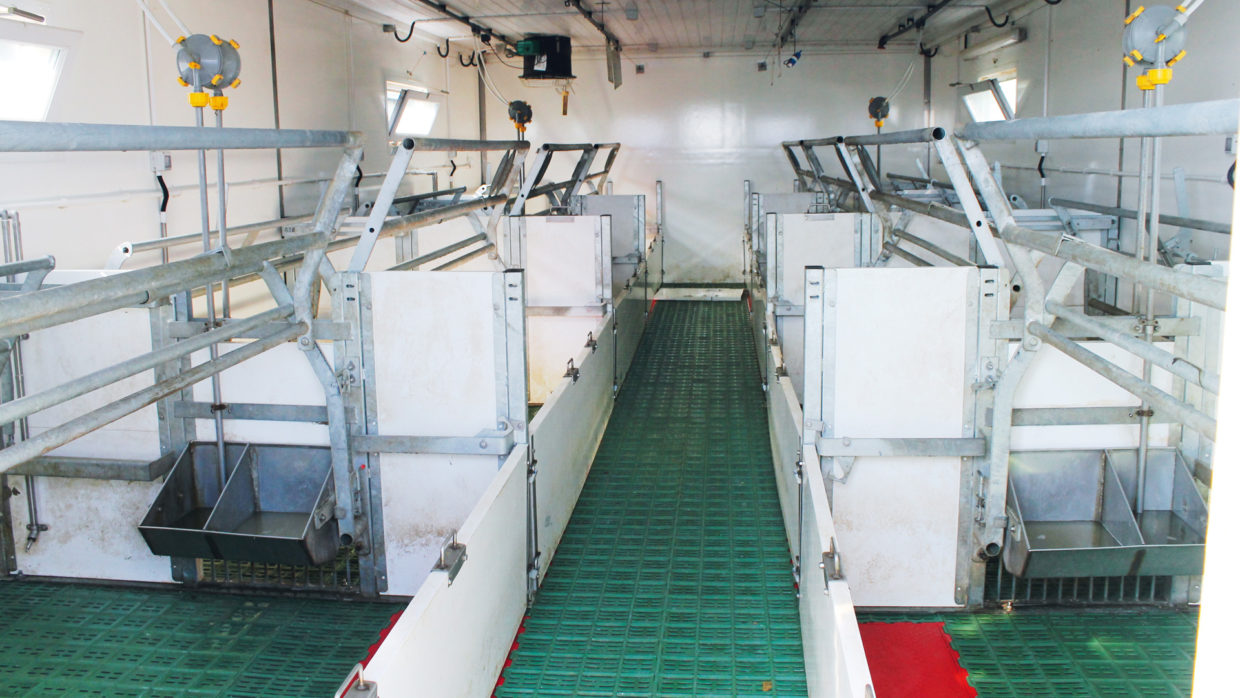 The sows farrow in three-week batches and the all-in, all-out system followed by disin­fec­tion has reduced expen­di­ture on vacci­na­tions.

After their first litter, Mr Lasseter keeps the young sows together in outdoor pens to elim­i­nate any bullying by older sows. “That makes a massive differ­ence – we no longer get any second parity drop-off in produc­tion. They then join the main indoor sow herd after their second litter.” To keep costs down, Mr Lasseter produces all of his own cereals and straw, growing 130ha of winter wheat, winter barley and spring barley, with spring beans as a replace­ment to bought-in soya.

“I want to produce as much of my own feed as possible, but I do buy in some creep and grower feed as I don’t seem to be able to create a diet that’s good enough for pigs up to 20kg. If you can get them off to a good start it makes a huge differ­ence.”

Mr Lasseter weighs all of his piglets at weaning and again six weeks post-weaning. “We used to just weigh an average group, but now we’re weighing every litter and we’ve realised that some sows are producing twice as much pig meat as others,” he says. “We always selected our gilts from sows using number of piglets born alive and weaned, as well as fertility – now we’re adding in litter weights as well.”

The new farrowing pens are also revealing the sows’ true genetic poten­tial, with some weaning 15 piglets, and a top 26-day litter weight of 145kg. “We had no idea that some sows had the poten­tial to do that. And the poten­tial of our gilts looks even better, so there’s plenty more to come,” says Mr Lasseter. In a bid to further improve produc­tivity, he is serving more sows over a slightly extended period, and has upped his replace­ment rate to bring gilts through more quickly. “We’re also selecting gilts with 16-18 nipples in pref­er­ence to those with 14.” 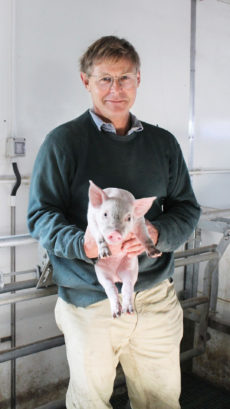 The sows farrow in batches three weeks apart for ease of manage­ment, and the all-in, all-out system followed by cleanout and disin­fec­tion means Mr Lasseter has been able to reduce expen­di­ture on vacci­na­tions. “I like simple systems – plus all the jobs on the farm must be able to be carried out by a girl. You’re doubling your poten­tial work­force, and women are really good with the young stock. I really like having a young work­force because they have bags of enthu­siasm and loads of ideas.”

It is essen­tial sows have only one type of farrowing pen so they can learn the system, he warns. “This makes it a more diffi­cult finan­cial chal­lenge to change from crates, but unless all are changed the bene­fits for staff and sows won’t come through.”

arm, but when it comes to profit in pigs it’s all about the numbers. When prices are low you can lose a lot, but when they are good you can recoup a lot and rein­vest, which is what we did in 2014,” he adds. “Our return on invest­ment in the farrowing pens will be 10 years or more, but I think the whole industry will be moving to free farrowing in the future – the 360° pen is the most impor­tant devel­op­ment since the farrowing crate.”

There are many types of hunger. If we want to feed the world, we should not only pay atten­tion to the quan­tity but also to the quality of food.﻿