There are many types of hunger. If we want to feed the world, we should not only pay atten­tion to the quan­tity but also to the quality of food.

Every eighth person in the world goes to bed hungry every day. According to esti­mates by the Food and Agri­cul­ture Orga­ni­za­tion (FAO), which belongs to the United Nations (UN), this is 821 million people. Most of the hungry are at home in Africa. About three-quar­ters live in rural areas – where food is culti­vated. Theo­ret­i­cally, enough food would be avail­able if the distri­b­u­tion were fair and the only cause of hunger. According to the FAO, food produc­tion would have to increase by at least 60% by 2050 if the esti­mated 9 billion people living there were to be satis­fied.

The FAO defines hunger as when the daily energy intake over a prolonged period remains below the level required for a healthy body. The minimum food intake required is assessed by this UN organ­i­sa­tion at approx­i­mately 1,800 calo­ries per day. But hunger is not only the result of too few calo­ries; it has various forms.

According to the German aid organ­i­sa­tion World Hunger Relief (Welthunger­hilfe), based in Bonn, there are three different types of hunger:

For some time now, scien­tists, led by Professor Hans Konrad Biesalski of the Univer­sity of Hohen­heim, near Stuttgart, have been pointing out that malnu­tri­tion, which is also referred to as hidden or silent hunger, is a major problem. The three staple foods of rice, maize and wheat cover about 80% of the daily calorie require­ments of one third of the world’s popu­la­tion, but they lack micronu­tri­ents such as vita­mins, minerals, trace elements, essen­tial fatty acids and amino acids.

of the daily calorie require­ment cover the three staple foods rice, corn and wheat for one third of the world’s popu­la­tion.

Nutri­tion expert Prof Biesalski warns us not to see world hunger simply as an insuf­fi­cient quan­tity of food. If malnu­tri­tion starts in the mother’s womb, this has a nega­tive impact on the phys­ical and mental devel­op­ment of a child. With increasing poverty, the hidden hunger of malnu­tri­tion is also becoming more common in highly devel­oped coun­tries like the USA and in Europe. People with little money to spend rely mainly on energy-rich or fatty foods. This results in poorer people becoming over­weight – as para­dox­ical as this may seem at first sight, as a conse­quence of malnu­tri­tion. 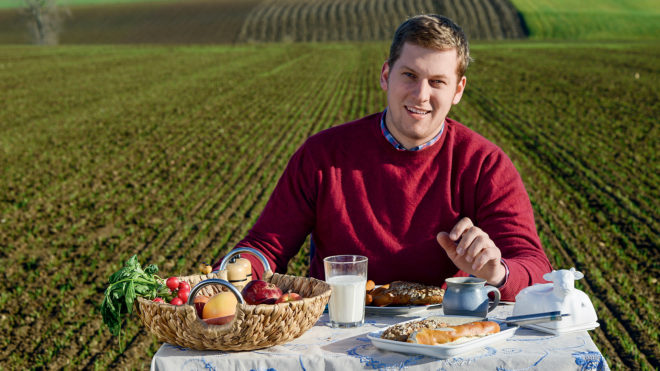 According to the FAO, food produc­tion would have to increase by at least 60 % by 2050 if the esti­mated 9 billion people living there were to be fed.

Professor Ismail Cakmak, of Sabanci Univer­sity in Istanbul has taken up the cause of fighting against malnu­tri­tion by improving the diet of people by adding more micronu­tri­ents, which also include trace elements. When this agri­cul­tural scien­tist discov­ered about twenty years ago in Anatolia that zinc defi­ciency was the cause of stunted growth in cereals, resulting in declining yields, this caused a minor sensa­tion. Before that time, the link between the zinc-defi­cient soils of Anatolia and diseases in plants and humans had not been explained.

Although Prof Cakmak has been involved in the inter­na­tional Harvest Zinc Fertil­izer Project since 2008, there is still much work to be done. Almost half of the world’s grain crops suffer from zinc defi­ciency. This results in smaller harvests with a lower zinc concen­tra­tion in the grain, and conse­quently also in grain-based foods, as the 55-year-old explained at a confer­ence of the Insti­tute of Applied Plant Nutri­tion (IAPN), a collab­o­ra­tion project of the Univer­sity of Göttingen in Germany and the German fertiliser producer K+S Kali. With the devel­op­ment of better fertil­i­sa­tion methods and the breeding of new vari­eties of crops which can absorb more zinc from the soil and store it in their grain, Prof Cakmak hopes that it will be possible to further improve the situ­a­tion in Turkey and in devel­oping and emerging coun­tries.

Less well known than zinc, the trace element sele­nium is found in humans in all our tissues and is a building block for about twenty types of proteins. It is also partly respon­sible for keeping our immune system healthy. Despite its impor­tant bene­fits, most people know nothing about it, even though sele­nium-enriched vegeta­bles are sold in the UK. When the major retailer Wait­rose offered sele­nium-enriched bread, consumers responded with less enthu­siasm than had been hoped for. People simply did not realise what health bene­fits they might derive from this.

Not only people but also animals can be affected by sele­nium defi­ciency. This is a partic­ular problem in the upland and hill farming areas of the UK, where the soils tend to have an even lower sele­nium status than in the lowlands. James Evans, a Shrop­shire beef and sheep farmer, started giving extra sele­nium to his live­stock ten years ago, using rumen boluses that also contain cobalt and iodine. “We saw a huge differ­ence in our breeding perfor­mance due to reduced numbers of retained cleans­ings and increasing fertility.”

Blood testing and forage analysis accu­rately tell farmers when their live­stock are lacking in sele­nium. Vet Harriet Fuller, based in Here­ford­shire, says: “Farmers are gener­ally providing adequate supple­men­ta­tion but we do still come across live­stock where we diag­nose sele­nium defi­ciency as the cause of infer­tility.” Ms Fuller favours boluses and drenches over mineral licks, but has also seen good results from fertiliser. “Boluses can last up to six months, covering the whole of the grazing period. Drenching might be best for lambs because they might not be on the farm long enough to warrant boluses. But mineral licks give uneven use: some will take a lot and some won’t take any.”

Although iron occurs very commonly in nature – this element makes up 28% of the Earth’s mass and more than 5% of the Earth’s conti­nental crust, many people only have very low levels of this trace element in their bodies. In Europe this is five to ten percent. Chil­dren and preg­nant women are partic­u­larly at risk because they have a higher require­ment for iron for their blood orma­tion. Iron is impor­tant for the synthesis of the red blood pigment (haemo­globin).

Although iron is promi­nently repre­sented in nature, many people suffer from anaemia caused by iron defi­ciency. In Europe this is five to ten percent.

Iron defi­ciency can also occur in plants, even if this trace element is present in the soil in large quan­ti­ties. The pH value of the soil is a crit­ical factor in this. The more alka­line the soil is, the less iron will be received by plants. The iron occur­ring in a water-insol­uble form in the soil must first be chem­i­cally modi­fied by plants before it can be trans­ported into their cells. The most commonly used strategy of plants affected by iron defi­ciency is to release protons through their roots into the soil to acidify it around their roots so that the iron will dissolve better. Grasses such as maize, wheat and rice have an addi­tional strategy They emit so-called phytosiderophores which form a neutral complex with the iron, which is then drawn in by a specific trans­port system into the root cells.

Farmers have three main ways of combat­ting iron defi­ciency in plants: Iron fertil­i­sa­tion around the leaves or roots of the plants, cultivation of suit­able vari­eties or cultivation of mixed crops. According to the Univer­sity of Minnesota in the USA, when oats are planted as a mixed culture, this will improve the iron supply for soya beans, because the oats prevent a surplus of nitrates and exces­sive damp­ness of the soil.

An inte­grated approach is essen­tial

Farmers are at the begin­ning of the food chain. They have a respon­si­bility for feeding the popu­la­tion. If, for example, they grow their crops on land which is poor in nutri­ents, the prod­ucts can hardly be better than the soil they grew in, even if profes­sional cultivation methods are applied. To prevent this from happening, consul­tants, researchers and industry are requested to support farmers. Politi­cians also must not remain idle, because impor­tant issues such as the nutri­tion of the popu­la­tion are the concern of a govern­ment which aims to ensure that all its citi­zens have access to food in suffi­cient quan­ti­ties and of a good quality. Finally, the consumers them­selves have respon­si­bil­i­ties too. If eating habits lead to diet-related diseases, a rethink of these habits is required.

Fresh players in the market and new factors influ­encing pricing mean grain prices are fluc­tu­ating signif­i­cantly more than in the past. When selling their grain, farmers there­fore need to focus on good risk manage­ment.﻿