Fresh players in the market and new factors influ­encing pricing mean grain prices are fluc­tu­ating signif­i­cantly more than in the past. When selling their grain, farmers there­fore need to focus on good risk manage­ment.

Olaf Stammer still remem­bers a time just 10 years ago when a farmer would be proud to sell for 15 cents more than his neigh­bour. “After the 2007-2008 season and the onset of major price increases, it took me some time to adapt,” admits the farmer from Bad Schwartau in Northern Germany. “And I am still learning some­thing new every day.” In order to simplify input purchasing and stream­line the process for trading and selling its prod­ucts, this family farm teamed up with three neigh­bouring grain producers to form a joint-stock company. Together, their oper­a­tion covers 720ha, with storage capacity for 5,000t of grain and Mr Stammer managing sales oper­a­tions.

Today, Mr Stammer uses a secu­rity strategy, while also main­taining a system to enhance sales perfor­mance. “When I first started trading, I was moving big batches – as time went on, I started to break things up as much as possible. Since then, I’ve some­times sold stock in tenths or twelfths. This allows me to feel more secure and to stay on top of the market,” he explains. “In contrast, if I were to sell the harvest in quar­ters, and then the market rebounded just after the deal, that could mean in retro­spect I would have made a poor sale.” 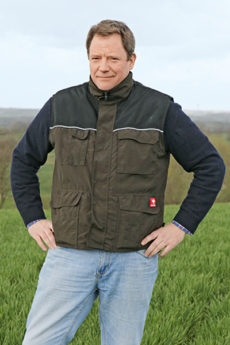 The farm company works with several merchants: Contracts are drawn up in the spring, but most of the grain goes out at a fixed price between December and the following harvest. “What makes it diffi­cult is that there will always be new situ­a­tions and atyp­ical years, so it’s impor­tant to be able to react and adapt.” Mr Stammer also empha­sises how impor­tant it is for farmers to famil­iarise them­selves with the futures market. This makes marketing and selling the grain much more complex – but also better-informed. Although in the not-too-distant past the farmer’s job was simply to: “Look after his fields and his live­stock,” today the job requires an aware­ness of global affairs going well beyond the imme­diate profes­sional envi­ron­ment.

In addi­tion to infor­ma­tion about global stocks, the state of crop produc­tion, exchange rates and input costs, Mr Stammer also considers it neces­sary to keep an eye on polit­ical devel­op­ments, as protec­tionist lean­ings halfway around the world can have a short-term effect – posi­tive or nega­tive – on the Matif commodity futures exchange in Paris.

About 200km to the east, Roland Marsch trades crops grown by his two sons, one in Jarmen in the German state of Meck­len­burg-Vorpom­mern with 1450ha (cereals, rape­seed and sugar beet), and the other in Estonia with 1,400ha. “It’s always diffi­cult to fore­cast how markets are going to develop,” says the farmer, who worked in the grain trade for six years. “My rule of thumb is: When prices are rela­tively good in compar­ison with previous years, you have to sell, without hesi­ta­tion and in small quan­ti­ties. Trying to get the best possible price for 100% of your crop would be danger­ously spec­u­la­tive.” 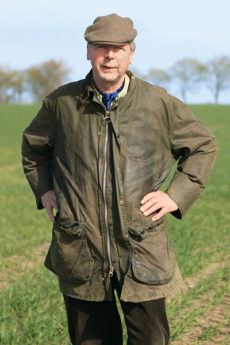 He cites the 2015-16 season, during which an expected price rise failed to mate­ri­alise, and he was forced to sell a large portion of his harvest during a down­turn, with the market occa­sion­ally bouncing back via a few very short-lived bright spells. Taking such a strategy in an overall bear market allowed him to get the most out of a tricky situ­a­tion: “Successful trading is also about courage; taking action even when prices don’t seem that attrac­tive.”

Trying to get the best possible price for 100% of your produce would be danger­ously spec­u­la­tive.

In order to remain prof­itable, every strategy must take into account the internal organ­i­sa­tion of the farming oper­a­tion, warns Mr Marsch. “We have a lot of contracts, but we also make an effort to have only one buyer per crop so as to stream­line delivery costs as much as possible. Resources, both human and mate­rial, must be put to the best possible use as part of an overall sales strategy,” he explains. “And of course, working with greater quan­ti­ties allows us to better manage quality para­me­ters via scaling measure­ments.”

Clear objec­tives and strategy for marketing

Patrick Bodié, head of “Mes Marchés” (My Markets) at the Chamber of Agri­cul­ture in Aube, France, says it is impor­tant for each farmer to find the approach that works for him. For example, even though average prices may turn out to be lower than fixed prices, they may still be prefer­able when the farmer is having diffi­culty in making selling deci­sions. “In such cases, farmers are better off dele­gating sales oper­a­tions to their grain storage co-oper­a­tive.”

In a more general sense, Mr Bodié also recom­mends limiting the amount of time spent gath­ering infor­ma­tion, and instead keeping an eye on the big picture. “Too much constantly- changing infor­ma­tion can stifle our ability to take action. Successful sales are not all about industry exper­tise, as some people mistak­enly think. Of course, you do need to know the market and the commer­cial tools involved, but the most impor­tant thing is to define a strategy and set objec­tives.” It’s essen­tial to estab­lish a spread­sheet of key values, including the profit threshold, based on fixed costs and expected revenues, as well as the farm’s histor­ical buy/sell prices. Based on the objec­tives in ques­tion (such as secu­rity or opti­mi­sa­tion), the strategy will then set the next steps for upcoming seasons. “You have to be able to look down the road, and set your­self a pricing perspec­tive over the next two years.”

Main­taining a simple and effi­cient approach to tackle the complexity of market mech­a­nisms is the tactic favoured by Éric Collot. He heads a 112ha arable oper­a­tion near Prunay- Belleville (Aube), including wheat, spring barley, sugar beet, alfalfa, rape­seed, and phar­ma­ceu­tical plants. “The hardest thing about grain trading is knowing when to pull the trigger,” he says. “You can’t let your­self be taken in by the prices. I use the average price of my sales from the last three years as a basis, and I sell every­thing that falls above that. I start from the idea that the costs from the last three years are rela­tively consis­tent with my struc­tural costs, and I know what level of prof­itability I’ve had at those prices.” 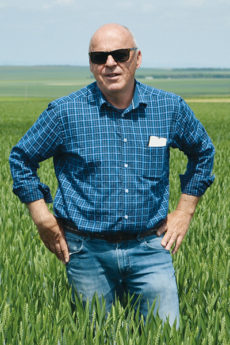 With wheat yields highly stable, Mr Collot (who stores most of his own grain) only sells at fixed prices. Having invested in the markets for the past 14 years, he retains futures trading options to benefit from price rises, but rarely goes through part­ners for this, instead prefer­ring to main­tain his own futures market account.

You can’t let your­self be taken in by the prices.

“In 2016, I had pre-sold 60% of my wheat before harvest, because I noticed signif­i­cant economic patterns that pointed to a price drop,” he explains. “Due to very poor weather, that 60% ended up repre­senting almost the entire harvest.” Mr Collot’s intu­ition allowed him to come out of this diffi­cult season in the black, with an average reduced net price of €170/t. Despite the loss of income due to lower wheat yields, the farm was able to secure a modest profit in the 2016-2017 season thanks to the price achieved and the diver­si­fi­ca­tion of produc­tion. “Weather patterns in recent years have made it harder for us to control the quan­ti­ties, protein levels, and specific weights. We must there­fore try to stay on top of as many aspects as we can in order to secure our revenue streams: Firstly in terms of prices, and also via very careful manage­ment of all the other economic factors.”

Although futures markets will always carry a certain level of unpre­dictability, they do offer greater trans­parency and thereby poten­tially fairer prices, insists Mr Bodié. He contends that farmers now under­stand this, noting that demand for training in these subjects is growing. A survey carried out by the Aube Chamber of Agri­cul­ture between 2010 and 2016 showed that grain prices were the top factor in deter­mining profit margins, ahead of cost opti­mi­sa­tion and yield. Still, the commer­cial envi­ron­ment has changed consid­er­ably over the past few years, and those who fully under­stand the market and are actively involved in trading will be best placed to capi­talise on this.

At the same time, we are also seeing a boom in deci­sion-making tools. There are now a wide number of options not only for securing revenues in a diffi­cult climate, but also allowing users to save or invest. “It’s also possible to see a silver lining in increased price changes,” hints Mr Bodié. “On the one hand it’s seen as risky, but it can also be viewed as an oppor­tu­nity.”

Price is not only deter­mined by weather any more 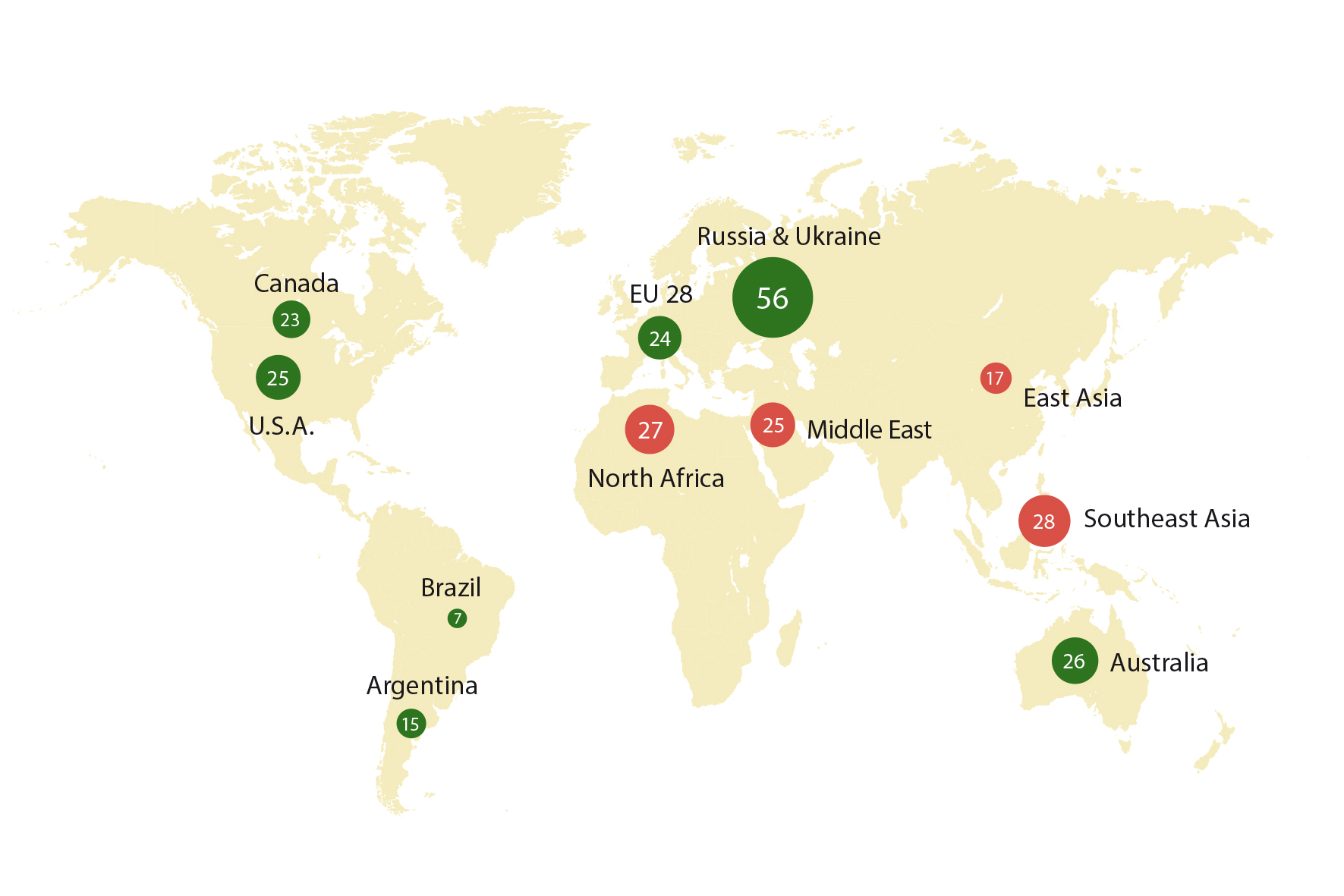 What does the inter­na­tional grain market look like right now, and what devel­op­ments are to be expected in future? “Russia, the Ukraine and eastern Euro­pean coun­tries have become much more domi­nant in the supply of grain to the global market,” says Jack Watts, lead analyst at AHDB – the UK’s grain levy board. At the same time, rising invest­ment and the adop­tion of GM crops have propelled Latin America onto the scene.

Although the US and Europe remain the top-flight producers, the envi­ron­ment is becoming more and more compet­i­tive. “We are more reliant than ever on emerging economies, which creates a lot more uncer­tainty as these have less trans­parent markets with more erratic weather, currency and politics.”While global supply is still sourced from a handful of major exporters, import demand is becoming much more diver­si­fied. The key markets are in north Africa, while the Middle East and Saudi Arabia are emerging importers; the Saudis in partic­ular are looking to increase imports to preserve their water resources, explains Mr Watts. Asian demand is also increasing, linked to its growing middle classes and west­ern­i­sa­tion of diets.

Chinese demand for fodder crops has soared in recent years, but the rest of the world’s ability to increase produc­tion to meet this demand has been under-esti­mated, he adds. Chinese policy also led to a rapid increase in self-suffi­ciency; so much so that policy then changed again to run down the large maize stocks. “China report­edly holds 40-50% of the world’s wheat stocks, but nobody really knows.” Chinese demand will certainly continue to increase, but it will be diffi­cult to fore­cast by how much, given the lack of govern­ment trans­parency.

In terms of produc­tion, Russia and Brazil remain the ones to watch. “Produc­tion has increased signif­i­cantly but the infra­struc­ture for exports has not kept up, creating a number of bottle­necks and disrupting grain flow,” says Mr Watts. With the world now in a period of rela­tively low grain prices, invest­ment to improve that infra­struc­ture is unlikely to be forth­coming.

Jan Peters is the founder of the infor­ma­tion service agrarfax.de (today owned by Land­wirtschaftsverlag GmbH). He is a corre­spon­dent for the specialist publi­ca­tion Agrarzeitung and provides agri­cul­tural infor­ma­tion on a daily basis to Reuters Hamburg, Dow Jones Newswire London, and VWD Frank­furt.﻿

There are many types of hunger. If we want to feed the world, we should not only pay atten­tion to the quan­tity but also to the quality of food.﻿