Tinned toma­toes are not consid­ered a big money busi­ness. But despite this, one Italian producer has managed to achieve success by focusing on quality and fair condi­tions for its farmers. So what has been Mutti’s recipe for success?

The harvester ploughs through a field full of ripe toma­toes with aston­ishing preci­sion. Sat behind the wheel, Marco Fran­zoni glances back and forth between his rear-view mirrors, displays and conveyor belts, adjusting the speed of the harvester’s feed and the conveyor belts with levers and knobs as he goes. Ahead of him, the machine gobbles up all the plants in its path, before spit­ting out weeds, stalks and roots out of the back onto the field.

Mean­while, two workers are busy sepa­rating out the damaged toma­toes, stones and chunks of earth from the pile. The healthy toma­toes are rolled over a conveyor belt and into a trailer driving along­side the harvester. But how do the toma­toes survive the whole oper­a­tion unscathed? “These toma­toes are not like the typical salad toma­toes avail­able on the market,” explains Santa Vittoria, a strongly built farmer with a beard to match. “For our tinned toma­toes, we grow robust vari­eties with thick skin and low, bushy plants.” 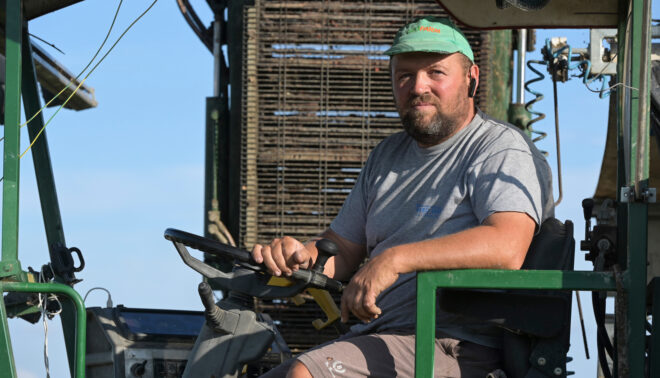 A man committed to quality: Marco Fran­zoni is constantly working to improve his toma­toes.

Summer in northern Italy is tomato season. Truck­loads filled with tonnes of the plump fruits exuding the scent of ‘Passata di Pomodoro’ are trans­ported from Italy’s ‘Food Valley’ to large facto­ries in the surrounding area every summer. Here the toma­toes are boiled down, at times concen­trated, and tinned by the millions. The area around the city of Parma is better known for its ham and hard cheese. Parma ham and Parmesan cheese both bear the name of the picturesque univer­sity city set on the banks of the Parma river. But tinned toma­toes? Although it’s a given that no bolog­nese or salsa is complete without them, until recently hardly anyone had paid much atten­tion to the cheap product and where it came from.

Tinned toma­toes from Italy haven’t always got the best repu­ta­tion, espe­cially due to concerns that toma­toes and puree used in prod­ucts were actu­ally being sourced from China and labelled as being “Made in Italy”. Now consumer rights activists, chefs and TV show panel­lists are taking to tasting and rating a whole host of different tinned tomato brands. The frequent winner: Mutti from the Italian province of Parma. Mutti has worked its way up to the top of Italian food market thanks to the quality and sustain­ability of its toma­toes, and despite its produce costing quite a bit more than its competi­tors. Mutti’s prod­ucts have now firmly cemented their place on super­market shelves across a total of 95 coun­tries. 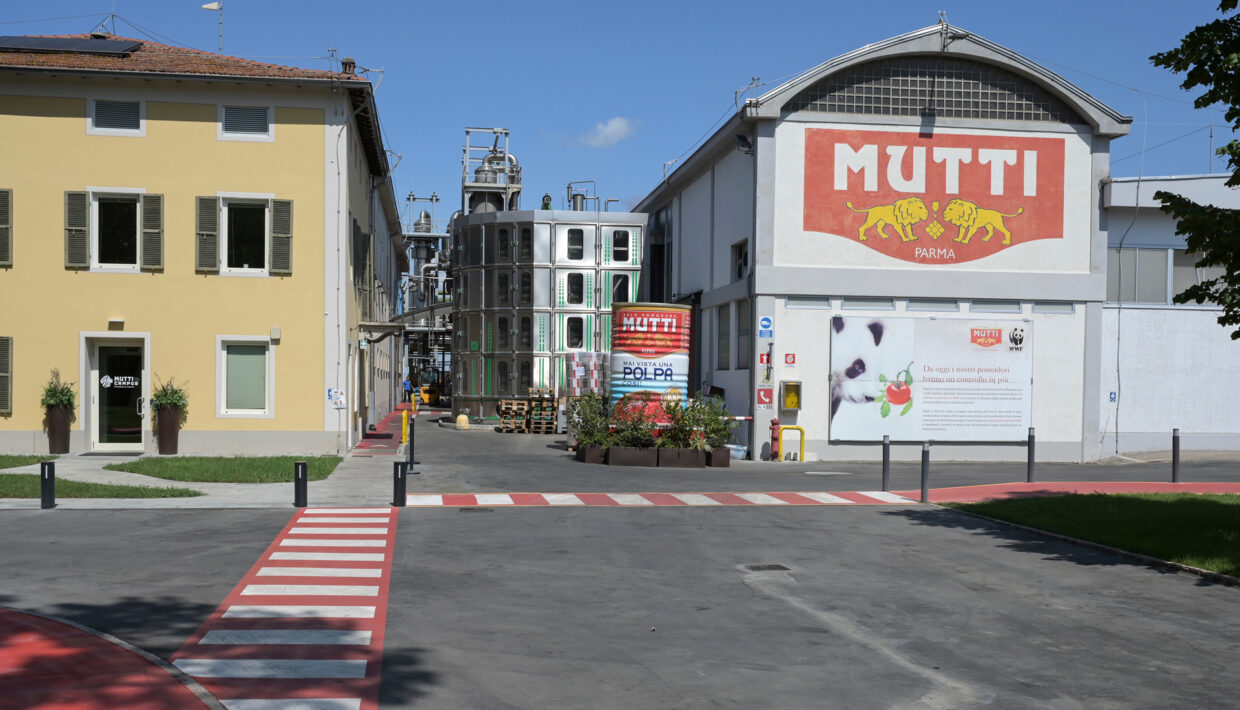 Around 850 farmers grow produce for Mutti in and around the area surrounding its main factory in Parma. One of them is Mr Fran­zoni. He sets aside one seventh of his 350ha of farm­land to tomato cultivation. The rest is used to grow wheat or grass for his cows to graze. When he started out, Mr Fran­zoni also supplied other compa­nies. Now he works exclu­sively for Mutti. “They place a great emphasis on quality, I like that,” he grins. “They take pride in their work.”

Mutti not only pays its farmers 10% above the season­ally fixed average price, but it also awards annual prizes to suppliers who deliver the best quality produce. In the north of the country, that adds up to some 40 farms every year. At the end of the harvesting season, the best of the farmers chosen receives a gold medal and an addi­tional cash bonus.

Mr Fran­zoni has already been crowned the winner of this pres­ti­gious award, worth several thou­sand euros, no less than five times. “I have mostly invested the money I have won in equip­ment.” If he wins again this year, Mr Fran­zoni wants to buy a GPS system for his planter so that he can work with even greater preci­sion and conserve more resources.

I have won the quality award for my toma­toes five times. I mostly invest the bonus money in new equip­ment.

The dark side of the tinned tomato busi­ness

It was and remains the farmers and harvesters who bear the brunt of dumping prices for tinned toma­toes. In the north of Italy, sowing, care and harvesting are all done by machines, apart from the few workers employed to sort through the crop collected by harvesters. In the south, it’s a different story. There, toma­toes are still harvested by hand, often by under­paid undoc­u­mented migrants. Recently, the death of a Malian harvest worker while at work in the field due to exces­sive heat in Apulia caused outrage across the country.

Until six years ago, Mutti had an agree­ment with its 200 contract farmers in the South of the country to ensure fair wages, suffi­cient breaks and an insur­ance program for the harvest workers. “But we found that it was not possible to reli­ably monitor these condi­tions were met,” says Ugo Peruch, the company’s agri­cul­tural director. Since then, Mutti has only worked with farms that produce by machine, even in the South.

Research and digi­tal­i­sa­tion for the future

In addi­tion to paying its farmers fairly, Mutti supports them further by investing in research, training and a digital learning plat­form. The company’s efforts are primarily focused on saving resources, in partic­ular water. The intro­duc­tion of drip irri­ga­tion, the opti­mi­sa­tion of irri­ga­tion times and cycles, and equip­ping farmers with special measuring devices to record data on their crop’s micro­cli­mate have enabled water savings of up to 30%. 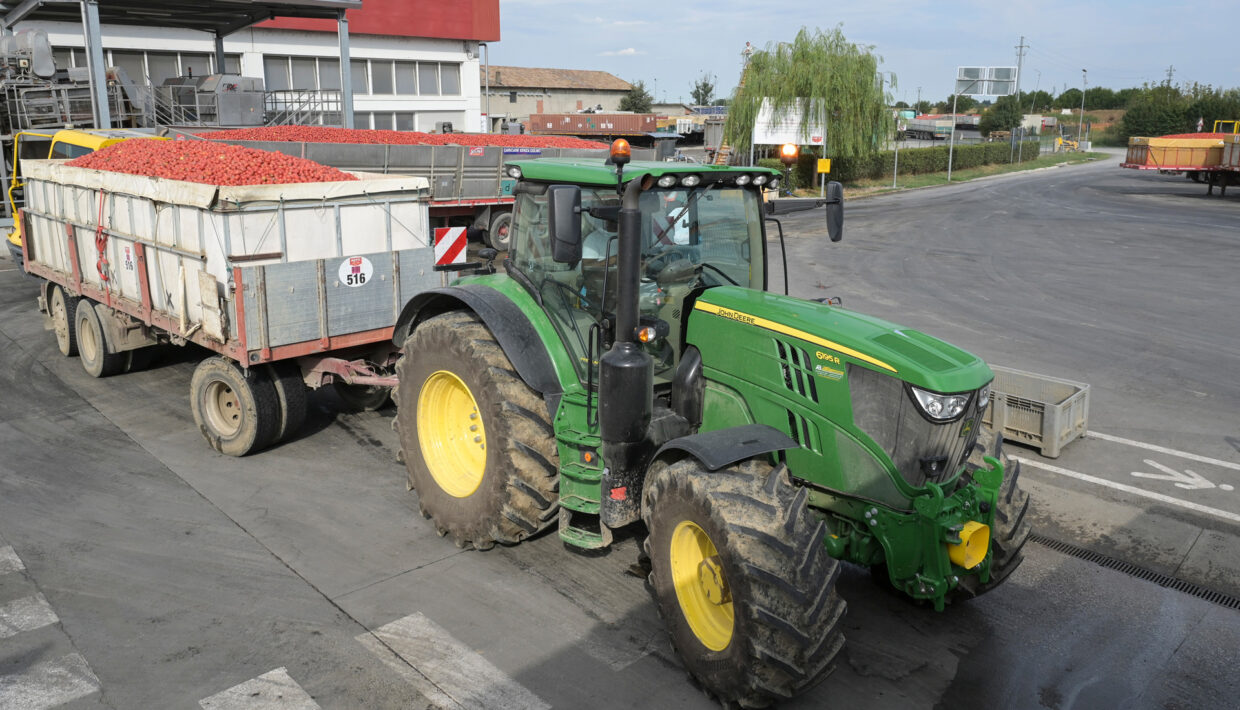 In addi­tion, pesti­cides have been reduced by 10%. “We want to consid­er­ably reduce our pesti­cide use even further,” explains Mr Peruch. Good toma­toes make tasty sauces. That much is clear. But first, they have to be processed correctly.

In the factory court­yard, truck­loads of toma­toes parked bumper to bumper are ready to be weighed and undergo the first quality checks. The factory processes 300 loads a day. That’s 7,500t, enough to fill 2.5 million tons of toma­toes. In just 10 weeks of harvesting, Mutti has the task of filling its thou­sands of square meters of ware­house space to ensure it has suffi­cient stock to last the year.

From turf to tin in just a few hours

The trailers of toma­toes are first rinsed with water. Down water­falls, in slowly turning drums, through canals and under sprin­kler systems: The toma­toes rush into basins the size of swim­ming pools. While they are rinsed, plant debris, stones and unripe or damaged produce are contin­u­ally sepa­rated from the good toma­toes, both by hand and with the help of sieves and optical sensors. The healthy toma­toes are then placed in a waterbed, where they make their way inside the factory via wide trans­port routes. There, the washing and sorting process continues. 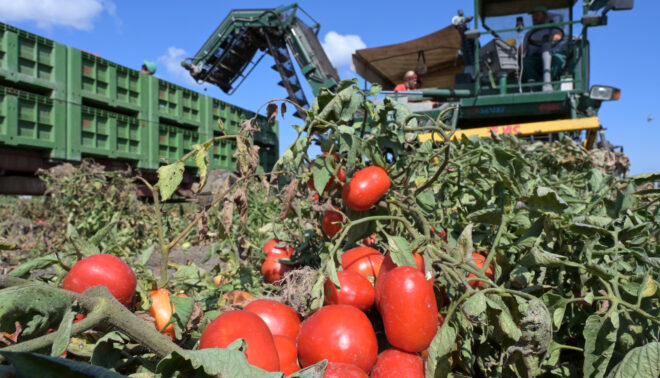 Although the toma­toes have already been sorted in the field, a fifth of the total quan­tity deliv­ered to the factory goes to biogas plants or feed troughs. The remaining toma­toes proceed to the next stage of processing. In a patented process, the toma­toes are pressed at low temper­a­tures before being turned into pulp, passata, pizza sauce or puree. Exactly how this is done remains a company secret. In any case, heat is only applied to the toma­toes at a later stage and only for some prod­ucts. Less than three hours after their arrival at the factory, the tinned toma­toes and tomato puree tubes made of only the ripest toma­toes are ready for the super­market shelves.

“Our careful prepa­ra­tion of toma­toes is one of the main reasons why they taste so good,” says CEO Francesco Mutti. The 53-year-old busi­ness tycoon is sat at a glass table, behind which stacks of Mutti tins from across the ages recount the history of the family busi­ness – now in its fourth gener­a­tion of family lead­er­ship. Your atten­tion is imme­di­ately drawn to Mr Mutti’s striking grey side­burns. The top button of his shirt collar is undone, his suit jacket and tie hang on a rack in the corner. Mr Mutti’s style is casual and dynamic. He can initiate change and inspire other people to try out some­thing new.

Bringing the factory to the field

For a prime example of Mr Mutti’s ability to initiate change you needn’t look any further than his so-called Instant­Fac­tory. This novel concept is located on a gravel car park, only a few hundred meters from Mr Franzoni’s tomato field. The small mobile factory of containers steams and hisses away as it gets to work.

Nicolas Jacoboni is the chief engi­neer in charge of getting the new plant up and running. In his safety shoes, he hurries back and forth between feed chute, tanks and steam gener­ator, tightens hoses and checks pres­sure gauges. He stops for a moment in front of a control glass. At this point, all that can be seen is hot water running through for ster­il­i­sa­tion purposes. A short time later, deep red passata is shooting through. One last look at the circuits and temper­a­ture indi­ca­tors on the display, before Mr Jacoboni nods with satis­fac­tion. “Once the system is up and running, it does all the work by itself.” 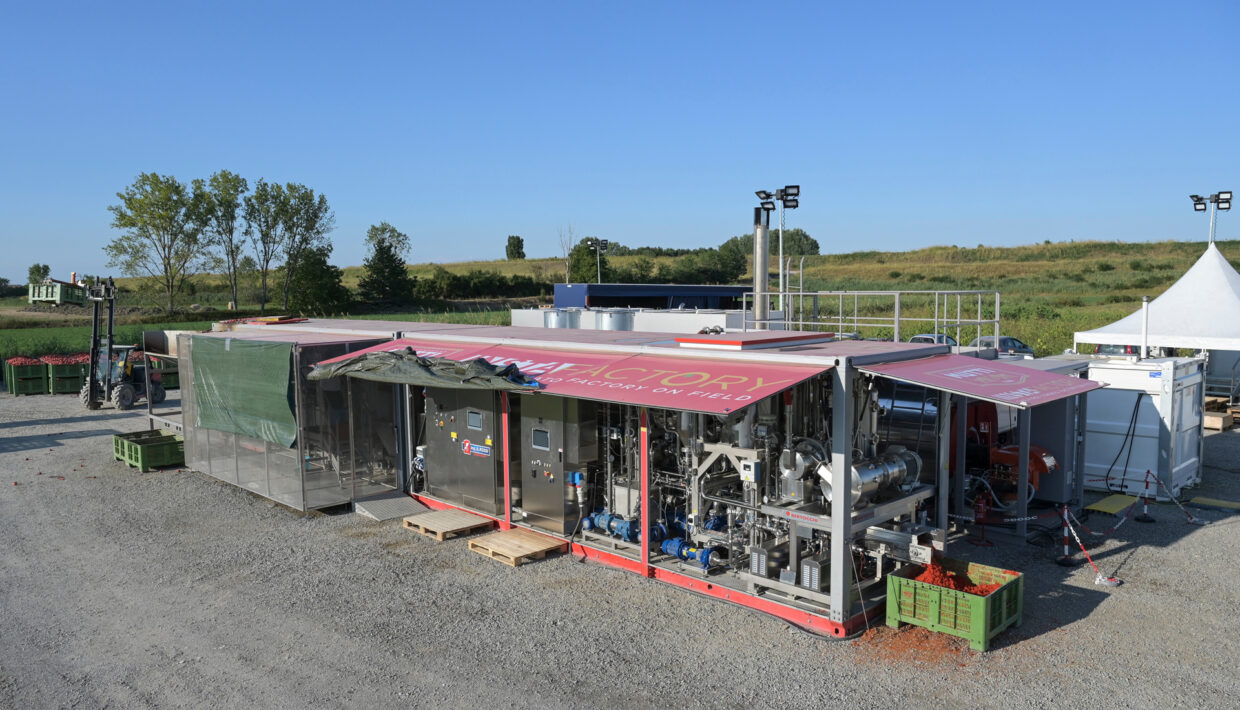 The fold-up factory. The Instant­Fac­tory stops for just a few days next to Marco Franzoni's field. 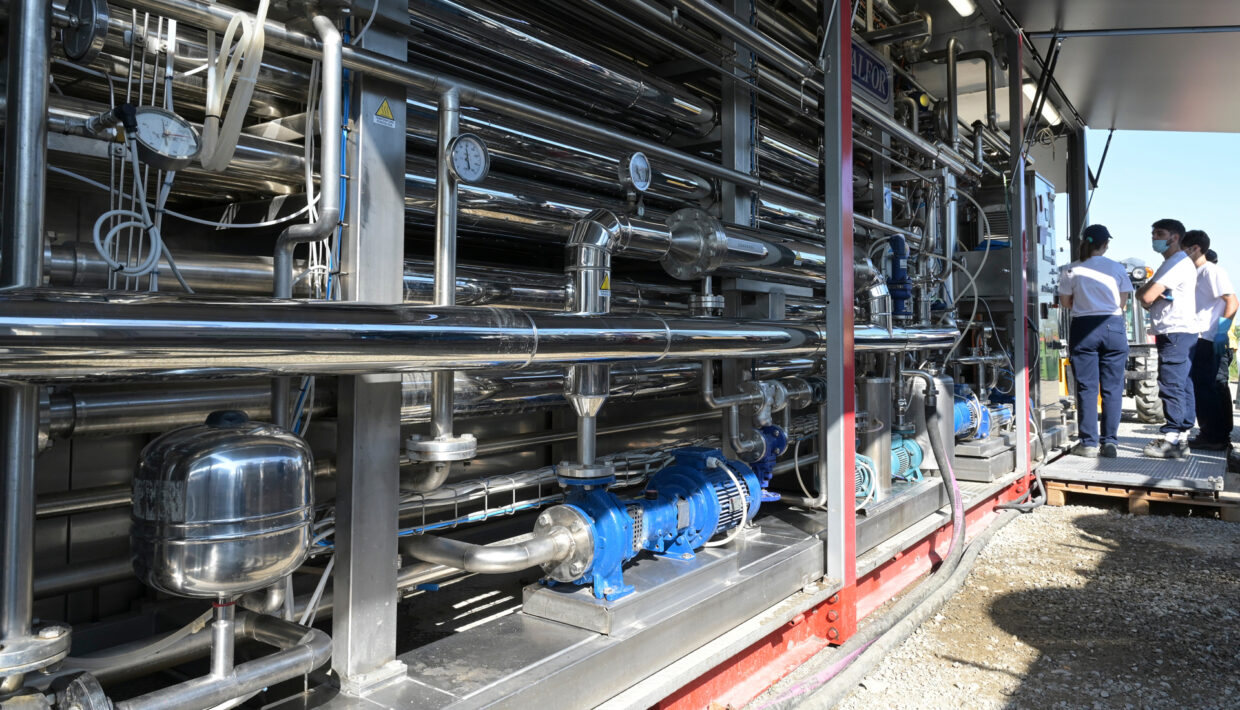 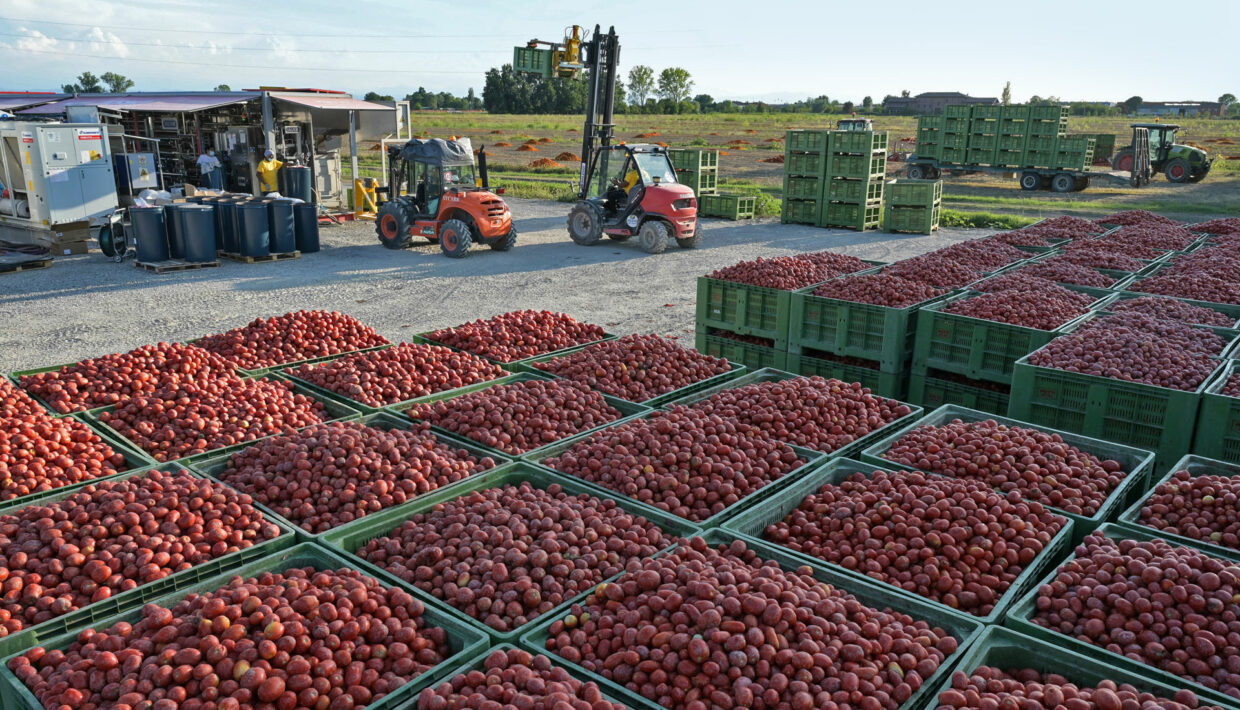 It doesn’t get any fresher than this. Even the more deli­cate tomato vari­eties can be processed in this way. And the process also saves on trans­port. But above all, the passata is produced in small quan­ti­ties that can be assigned to indi­vidual farms, in accor­dance with the nature of their soils and the respec­tive micro­cli­mate, similar to a Terroir wine. The quan­ti­ties of tomato passata produced are corre­spond­ingly small, at least by Mutti’s stan­dards. One million bottles of the so-called Passata sul Campo will appear on the Italian market this year. In Germany, the number is just 25,000.

In the evening, the Instant­Fac­tory continues its work under flood­lights. While Mr Fran­zoni has long finished for the day and lies in bed, there is no respite for the machines. The remaining toma­toes that weren’t turned to passata during the day are packed in large boxes at the edge of the gravel car park. Fork­lifts drive back and forth, emptying them into the InstantFactory’s feed chute. Mr Fran­zoni will be back in the morning and set to work once again, driving his harvesting machine through his field full of ripe toma­toes.