Do you drive a John Deere 6 series tractor from the Mannheim factory? Then you will be partic­u­larly inter­ested in this article, because we are going to take you on a tour of the factory and show you how our trac­tors are built.

Every three minutes a John Deere tractor rolls off the produc­tion line in Mannheim, Germany. On the modern, 380m-long final assembly line, it takes just under 4.5 hours to assemble a turnkey tractor from around 30,000 indi­vidual parts. Up to 147 medium-sized trac­tors of the 6M and 6R series are produced daily, all of which are pre-ordered by their future owners.

Our customers also follow this produc­tion process with interest. Prior to Corona some 20,000 visi­tors from Germany and abroad came to the largest John Deere factory outside the USA. On peak days, up to 250 people visited the factory in Mannheim and the cab factory in Bruchsal, says Heiner Ehmer, our director of the John Deere Forum. “We have a total of 11 factory guides with whom we can cover seven languages in order to welcome our guests into the world of our tractor factory.”

Mannheim is one of 70 John Deere facto­ries in 19 coun­tries. The produc­tion methods and quality manage­ment are the same for all loca­tions.

A tractor’s life begins with frame produc­tion. The robot needs about three minutes to assemble a frame. Nine basic types are produced. A unique selling point of Mannheim trac­tors is the steel bridge frame. It ensures high stability and enables easy instal­la­tion of various compo­nents. 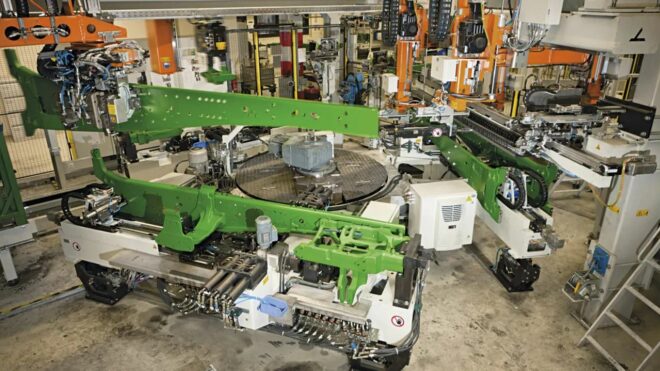 The nine different basic types of steel bridge frame are assem­bled by robot.

We attach great impor­tance to manu­fac­turing all main compo­nents ourselves. For this reason, the company has its own trans­mis­sion produc­tion facil­i­ties in Mannheim and in the Spanish plant in Getafe, among others. Synchro­nous and power­shift trans­mis­sions as well as the double clutch trans­mis­sion (Direct Drive) are specially produced in Mannheim. All vari­ants run along a 250m-long assembly line, at the end of which all func­tions of the trans­mis­sion are tested. The brakes, 3-point hitch and hydraulic systems are also assem­bled in this area. 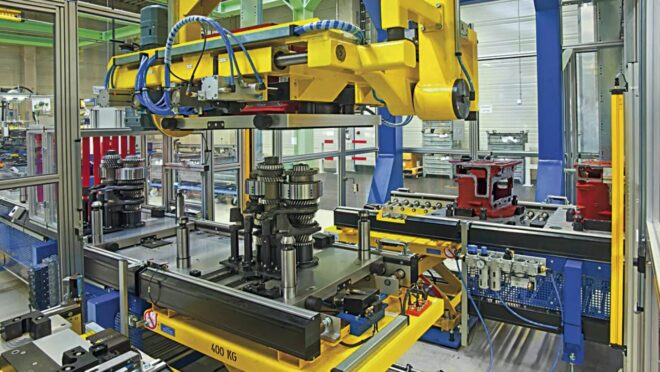 The trans­mis­sions are produced in different vari­ants on a 250m-long assembly line.

The Mannheim plant produces around 350,000 gears annu­ally for the tractor models built here. Compo­nents like hous­ings, shafts and axles also belong to the trans­mis­sion. Every­thing is produced with the help of 45 machine groups with more than 300 produc­tion machines. 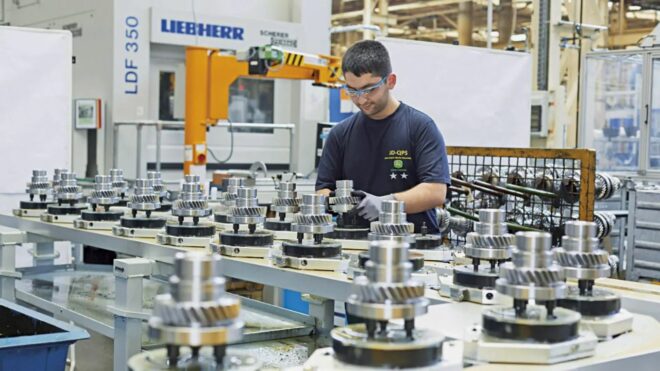 Around 350,000 gears are installed annu­ally at the John Deere factory in Mannheim.

Grad­u­ally the ‚skeleton‘ of our Deere fills out. When the frame is connected to the rear axle trans­mis­sion unit, the engine with the radi­ator and the emis­sion control system is next to be put in place. The heart of the trac­tors comes from our engine plant in Saran, France. Around 100,000 engines of between 95 and 250hp (four or six cylin­ders) are built there every year. 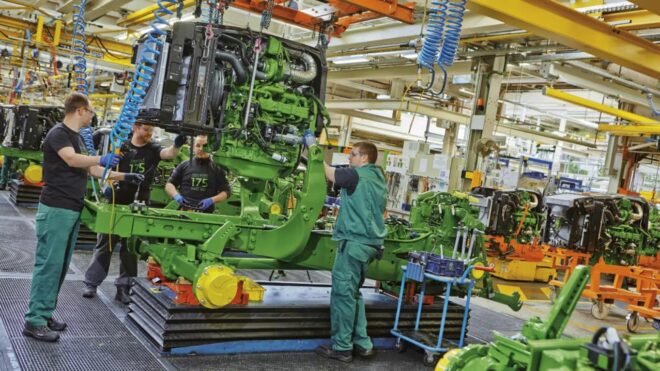 The heart of a John Deere tractor is the engine from the factory in Saran, France.

Weddings are part of our daily routine in final assembly. In tech­nical jargon, this means when the cab is joined to the chassis. About 40 bonds between the driver’s cab and the engine or trans­mis­sion ensure a perma­nent connec­tion. As John Deere’s cab and tractor produc­tion are synchro­nised, the cabs only arrive shortly before from our factory in Bruchsal, just under 50km away. In total, more than 30,000 cabs are built there every year (2017: 30,000 units). 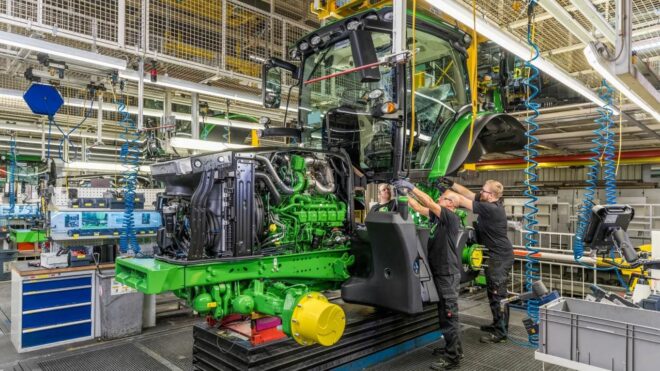 Every tractor assembly process also includes a wedding, where the cab is ‚married‘ to the chassis.

All elec­tronics are programmed before the tractor is ready for oper­a­tion. As manual testing is no longer possible due to the complexity and scope of today’s elec­trical and elec­tronic systems, we have intro­duced a test system (ECOS) which currently tests around 200 func­tions on the tractor. 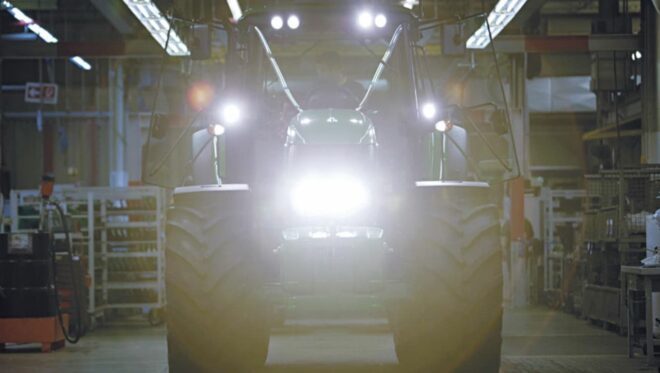 The tractor is started for the first time just before it passes through the func­tion test cab. This is where, among other things, cali­bra­tion of the brakes and steering, as well as input of the engine manage­ment program, takes place. After the test, the wheels are mounted. When the tractor is ready to drive, the elec­tronic park lock is tested on a ramp. It is in this area that our Deere also receives its front weights and other fairing parts. 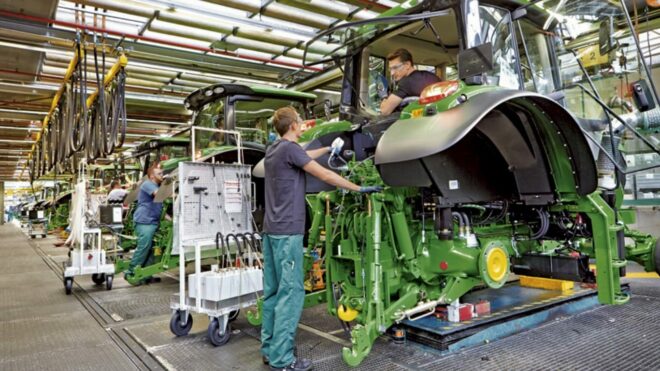 After checking the elec­tronics, the brakes and steering are cali­brated and the engine manage­ment programme is entered.

Every 45 seconds a tyre is auto­mat­i­cally mounted on a steel rim – with the first tyre-fitting system in Europe. A total of 540 different tyres and 120 rims are avail­able. For wheels on trac­tors with driving speeds of 50km/hr, what is known as ‚matching‘ takes place. This means that the mark­ings for the highest and lowest points on the rims and tyres are brought together so that the tyres run round evenly. 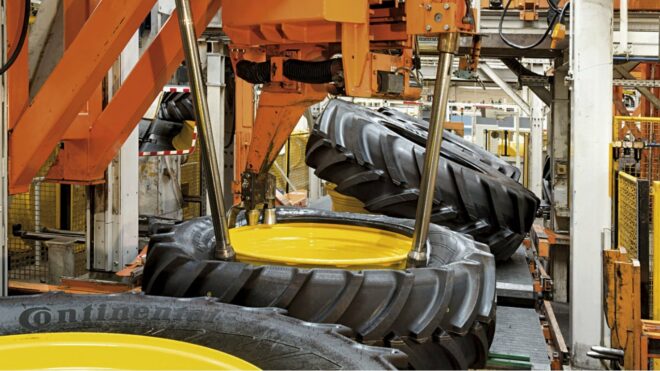 A tyre-fitting machine, the first in Europe, mounts a tyre on a steel rim every 45 seconds.

9. The driving and load test

A special feature in the tractor industry is our online test. Every tenth tractor under­goes a prac­tical driving and load test for 30 minutes. The measured data is directly eval­u­ated in terms of perfor­mance, consump­tion and func­tions. This is one of the reasons why our John Deere trac­tors run so reli­ably. 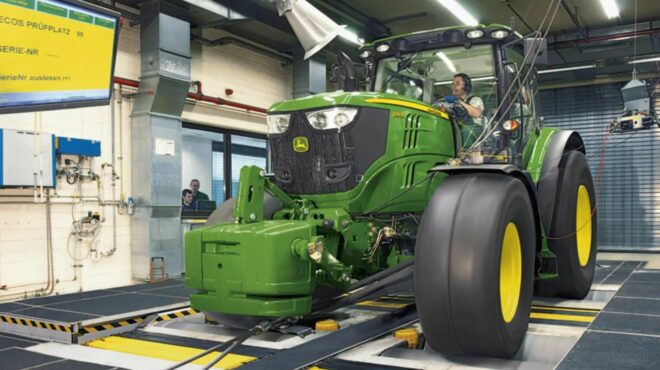 After assembly, every tenth tractor under­goes a driving and load test on the online test bench.

10. On the way to the customer

Every week Ro-Ro (Roll-on, Roll-off) ships trans­port around 360 John Deere trac­tors from the Rhine port of Mannheim to Rotterdam or Antwerp. From there, the trac­tors go to their respec­tive desti­na­tion port. Every week a deep-sea vessel travels to the USA, for example. Up to 50% of Mannheim’s trac­tors are shipped, the other half being trans­ported mainly by truck within Europe. 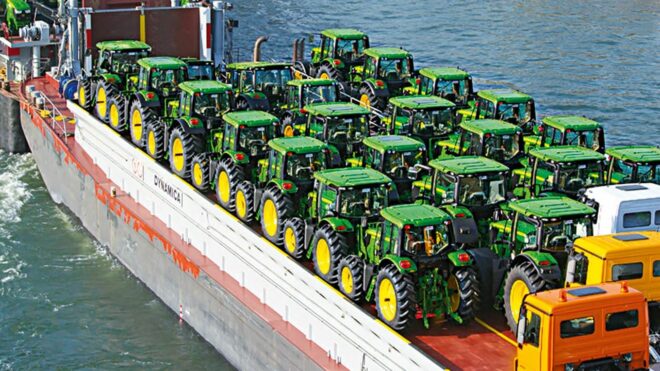 Ro-Ro ships trans­port around 360 John Deere trac­tors per week from Mannheim to the seaports of Rotterdam and Antwerp.

Zambian farmer Stephen Chinyama depends on several means to make a good living. We offer a sneak peek into a day in the life of a man running his family busi­ness with acumen, good risk manage­ment and a talent for impro­vi­sa­tion.﻿