Zambian farmer Stephen Chinyama depends on several means to make a good living. We offer a sneak peek into a day in the life of a man running his family busi­ness with acumen, good risk manage­ment and a talent for impro­vi­sa­tion.

Stephen Chinyama is sitting on a wooden stool in the shade of a tree. Satis­fied, his gaze wanders over his farm. He looks over the simple, recently plas­tered stone houses, the tractor, trailer with irri­ga­tion tank and the fire­place where the women cook Nshima. This corn porridge is the national dish in Zambia. The maize used for Nshima grows right next to the yard. ”When my father started out, there were still bushes and wild animals here,” says the farmer. Today, the area in the Southern Province, around the city of Mazabuka, is the agri­cul­tural centre of Zambia.

A sea of sugar cane grows in fields that seem to stretch to the horizon. It is culti­vated by contract farmers and Zambia Sugar, which runs a large sugar factory here. The subsidiary company of Asso­ci­ated British Foods not only produces most of Zambia’s needs, but also exports to numerous neigh­bouring coun­tries and to Europe.

When my father started out, there were still bushes and wild animals here.

Apart from sugar cane plan­ta­tions, thou­sands of small and medium farmers work here. Just like Mr Chinyama, who inher­ited the farm from his father around 20 years ago. ”Back then we had three cows and 20ha of land.” Today, he owns 60 cattle. In addi­tion to his own 20ha, he culti­vates around 30 leased hectares, growing maize and cotton as well as some peas and peanuts. The farmer feeds his large family well.

Between his own farm and a contractor

This, however, does not happen overnight. Mr Chinyama has many irons in the fire. Between June and November, he works other farmers’ fields using his tractor. Last year that accounted for over 300ha and 270 farmers. With the income earned he was able to pay off the tractor. ”But you have to start servicing it in good time, so that you can still work your own field.” He also earns money as a cotton seeds repre­sen­ta­tive for the Dutch company Louis Dreyfus, for which he also culti­vates cotton himself.

Mr Chinyama delivers the milk from his cows to a local dairy and used to sell beef locally. However, for some time now, he has been trans­porting animals to the Copper­belt in the North. Zambia’s indus­trial region is the largest copper mining area in Africa. ”The slaugh­ter­houses there pay a much higher price because of the high demand,” he says with a grin. ”After finding this out from a dealer, I went there myself to make contacts – it’s been going well ever since.”

Time for field work. Today, the family wants to sow cotton. One of the sons starts up the tractor, which sways over deep potholes and past neigh­bouring farms. Mr Chinyama waves in greeting and shouts out a few words here and there to those he passes. 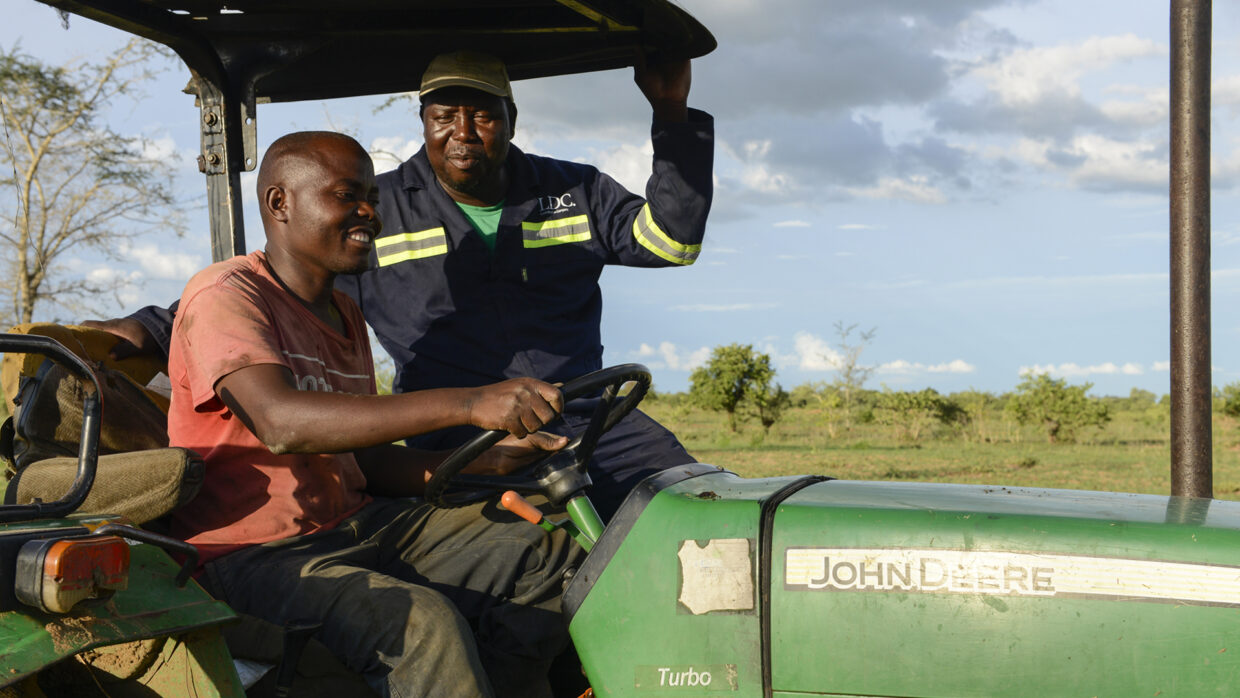 Stephen Chinyama uses his tractor to work other farmers' fields between June and November. 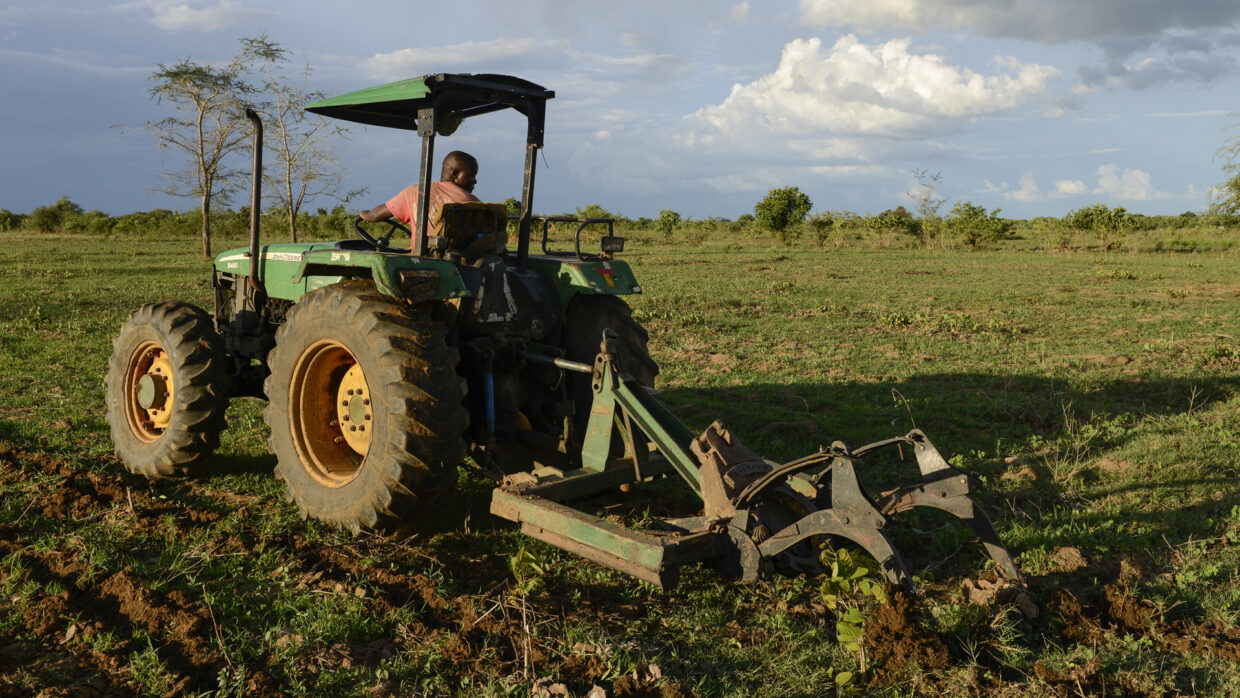 Chinyama's son works his way through the field with a culti­vator. 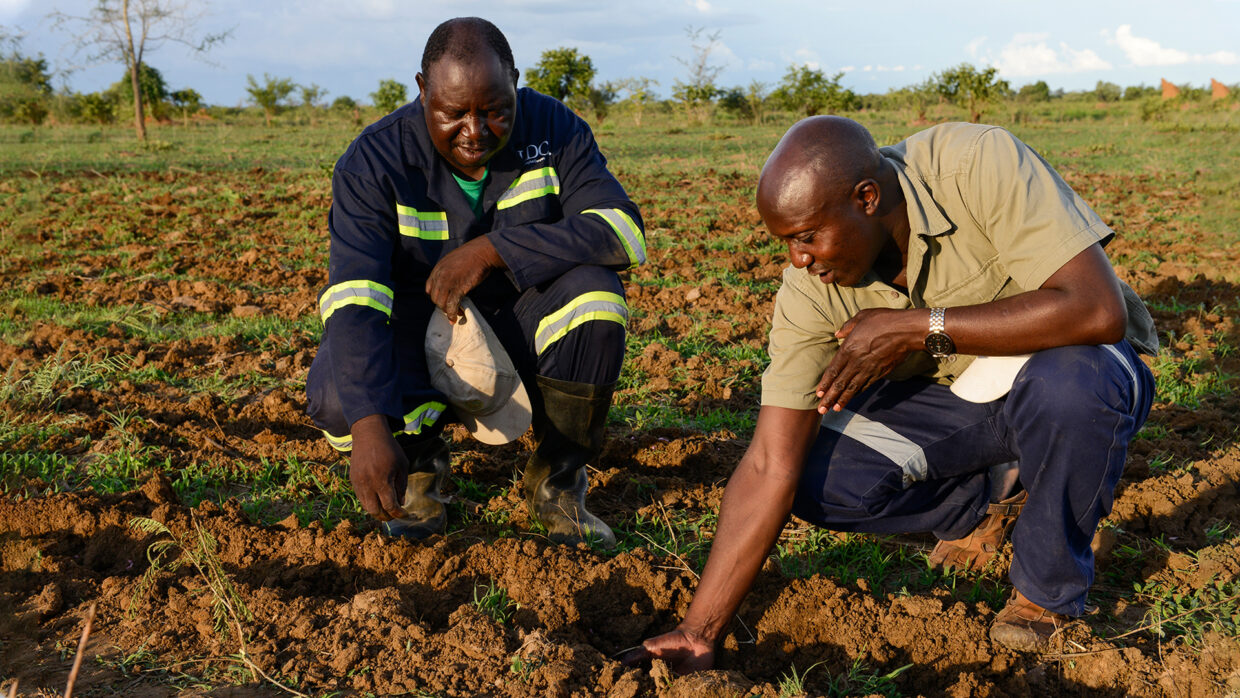 The culti­vator is already prepped so a little later, the tractor works its way through the field row by row. The resourceful farmer has not used a plough for a long time, since the Conser­va­tion Farming Unity intro­duced him to the concept of conser­va­tion agri­cul­ture. The organ­i­sa­tion from the capital of Lusaka, supported by UK Aid, trains around 200,000 farmers in Zambia each year using an inno­v­a­tive method orig­i­nally devel­oped in the USA. 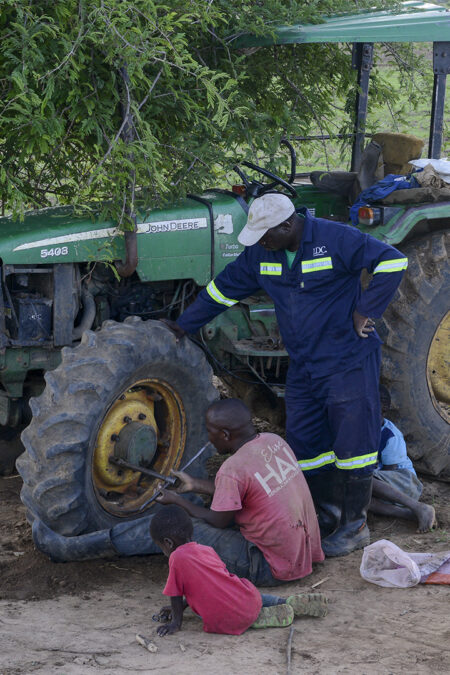 The prin­ciple idea is to move the soil as little as possible. ”When sowing, we carve the soil only a hand’s width and about eight inches deep,” explains Mr Chinyama. ”The rest of the soil remains untouched, which protects it from erosion, dehy­dra­tion and exces­sive compaction.” As a demon­stra­tion, the farmer steps onto the field’s springy ground with his rubber boots.

Organic mate­rial remains in the soil and decom­poses to release nutri­ents. But above all, the method helps to store mois­ture in the soil. This allows sowing a few weeks before the rainy season starts, even without arti­fi­cial irri­ga­tion, some­thing that hardly any small and medium farmers in Zambia have. ”My corn will already be knee-high when the first rain falls, when the others are only just begin­ning to sow.” Mr Chinyama was able to some extent double his yields with the help of this method. This is partic­u­larly in evidence with cotton, his cash crop.

The tractor stops. Flat tyre. Mr Chinyama’s two sons set to work with an iron bar, a foot­ball pump, a few thorns from an acacia tree, and stones from the field. After levering the mantle down, they mark three small holes in the tube using the thorns and roughen the surface with the stones. Mean­while, one of them walks to the next village to buy a patch and glue. It takes a good hour until the tractor is ready to be driven again.

No spare tube or tyre? ”Far too expen­sive, this one still works.” Mr Chinyama shrugs his shoul­ders and looks at the tractor that has resumed its work. Behind the vehicle, a few women from the family scatter cotton seeds into the channel carved in the ground by the field culti­vator. After­wards, they sweep soil over the sown ground using broken-off branches. Mr Chinyama may own a tractor, but without the manual labour of the whole family, the farm would not func­tion.

After every­thing is once more running according to plan, Mr Chinyama sets off for his next job. To settle the accounts, he has an appoint­ment with the head of repre­sen­ta­tion for Louis Dreyfus. Dominic Garapa greets him with a wide smile. In front of the simple stone house with a tin roof which serves as a ware­house and office, workers load the last bags of seeds onto a pick-up truck. ”We’ve deliv­ered seeds to to over 1,000 farmers,” explains Mr Garapa. ”Now the ware­house is empty.” The sacks of cotton will pile up here only after harvest in a few months.

We’ve deliv­ered seeds to to over 1,000 farmers. Now the ware­house is empty.

In the office there is a desk, a chair and a worn armchair. There is no computer. Using a ruler, a ball­point pen and carbon paper, Mr Garapa keeps a record of the inputs and outputs. ”Stephen Chinyama is our best man.” Despite the ongoing drought that has plagued southern Africa for a good two years, most farmers have sourced seeds again.

On the one hand, this is due to the fact that Mr Chinyama and a large number of his customers were able to limit losses thanks to conser­va­tion agri­cul­ture. On the other hand, many farmers have taken out contin­gency insur­ance. For this they receive new seeds on loan. ”When are you finally going to lower prices,” Mr Chinyama asks with a wide grin. Both laugh. 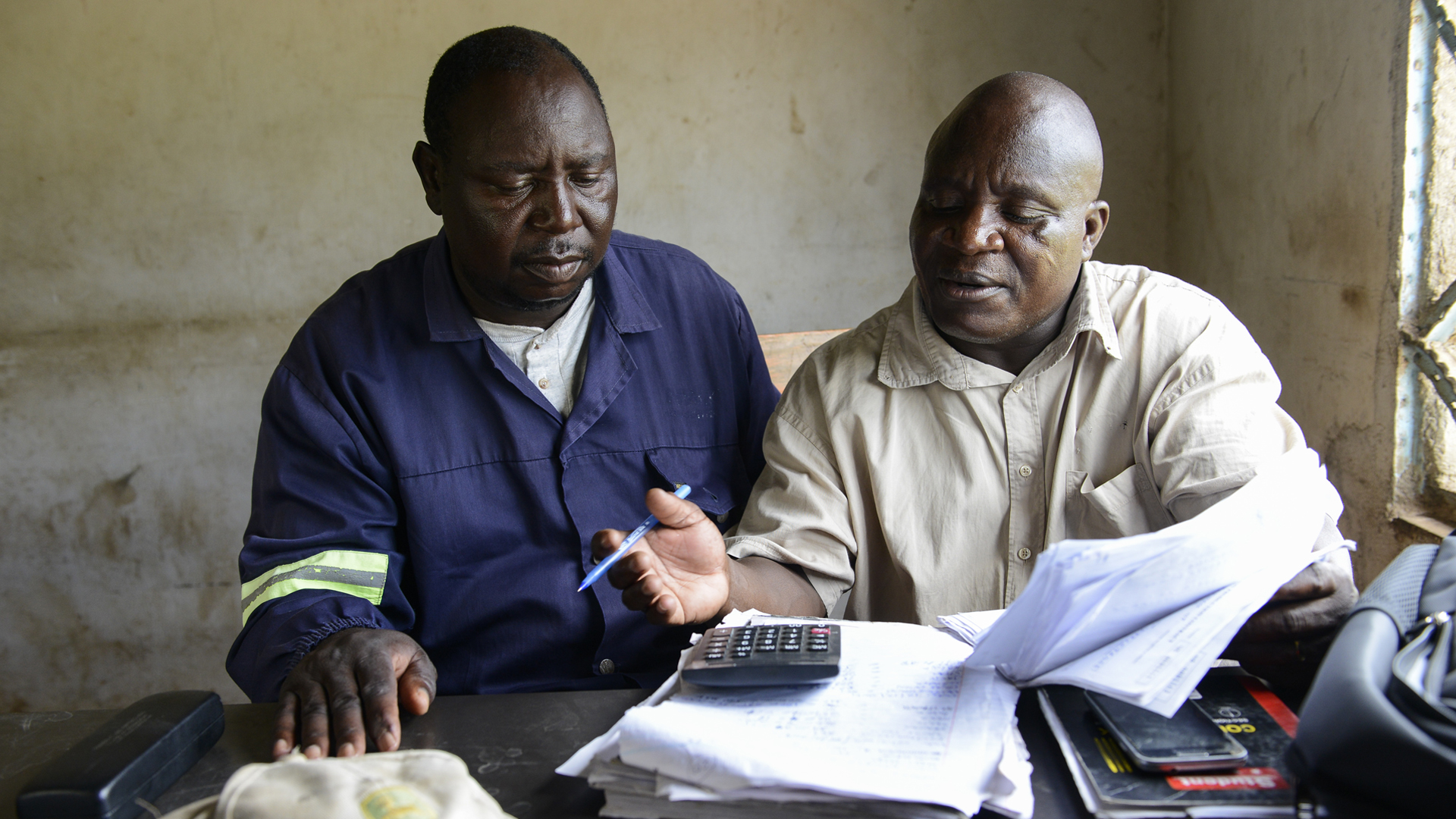 Using a ruler, ball­point pen and blue paper, Dominic Garapa (right) keeps a book about the entrances and exits.

His next appoint­ment is less enjoy­able. In Mazabuka, he wants to ask once again whether the subsidy payments from the govern­ment have been received. The city is booming. There are super­mar­kets, banks, restau­rants, work­shops for agri­cul­tural machinery, hauliers, dairies and seed dealers. One of them is Arnold Kwapu. He too welcomes Mr Chinyama in a friendly manner. But unfor­tu­nately he once more cannot give him seeds and fertiliser. The money from the govern­ment has still not arrived. 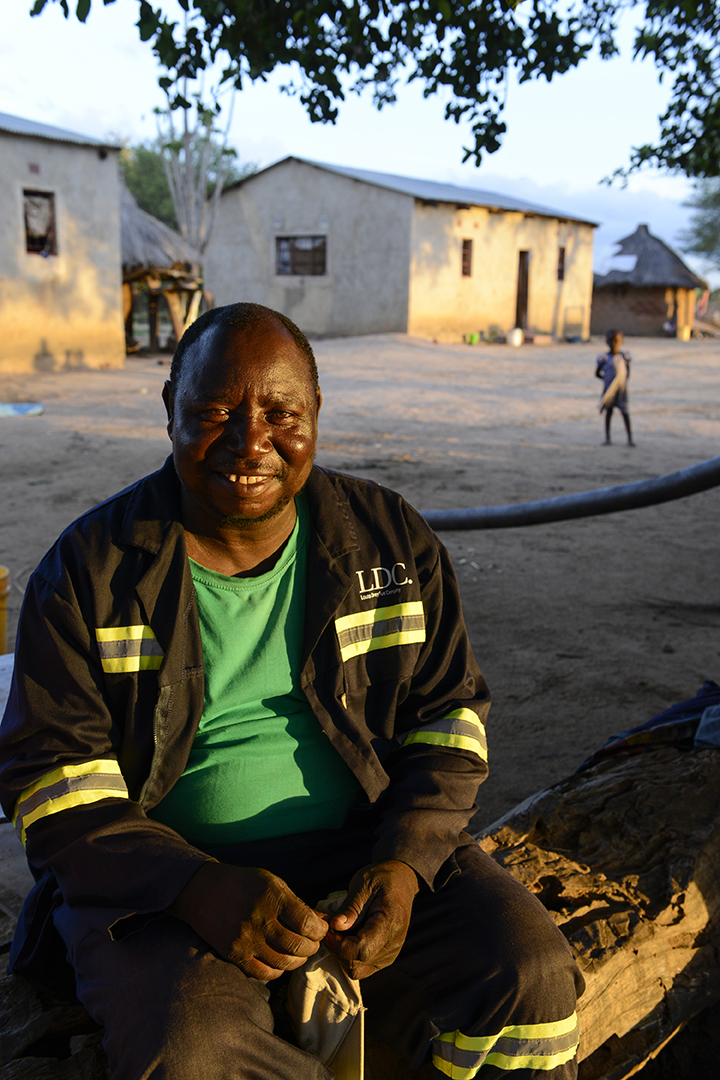 Stephen Chinyama is used to diffi­cul­ties. In the evening he has his good mood back again.

This pays for two-thirds of the invest­ment costs for maize cultivation, providing the farmer has already paid his own third. ”I did it ages ago.” Mr Chinyama is outraged. To promote maize cultivation, the govern­ment has promised nearly €25m (£22.6m) a year. ”The money seems to have disap­peared else­where,” says the dealer with resig­na­tion. ”But the farmers can’t wait, they have to sow and fertilise now.”

There are 2.5m small and medium farmers in Zambia. Around 80% of the country’s food grows on their fields. ”But the govern­ment doesn’t care about us.” Mr Chinyama’s expres­sions grows grim. Many of his plans and ideas fail because of poor finan­cial condi­tions, espe­cially high bank interest rates of 25-30%.

Mr Chinyama was only able to buy his tractor thanks to a cheap loan from the dealer arranged by the the Conser­va­tion Farming Unit. Like other neigh­bours, he would like to invest in irri­ga­tion to grow vegeta­bles for the local market. But how to finance it?

By evening, Mr Chinyama has recov­ered his good mood. He is used to diffi­cul­ties. ”That was a normal day today.” He sits again on the wooden stool in the yard. The tractor with the patched tyre stands under the tree. Nshima simmers on the fire. The setting sun casts long shadows of land­scape on the wall of one of the stone houses. After dinner, Mr Chinyama goes to bed early. After all, there’ll be a lot to do again tomorrow.