A new “Preci­sion Farming Free DLC” game for Farming Simu­lator 22 will be released on April 19. Benedikt Dahme and Markus Stein­müller from the John Deere gaming team have tested the free game expan­sion and reveal which new features make the sim even better.

Be honest, how long has the basic version of Farming Simu­lator 22 been on your PC?

Markus: Since day one, of course! The antic­i­pa­tion for the latest version of the simu­lator was huge, so we in the John Deere gaming team pre-ordered Farming Simu­lator to get it as soon as it came out. 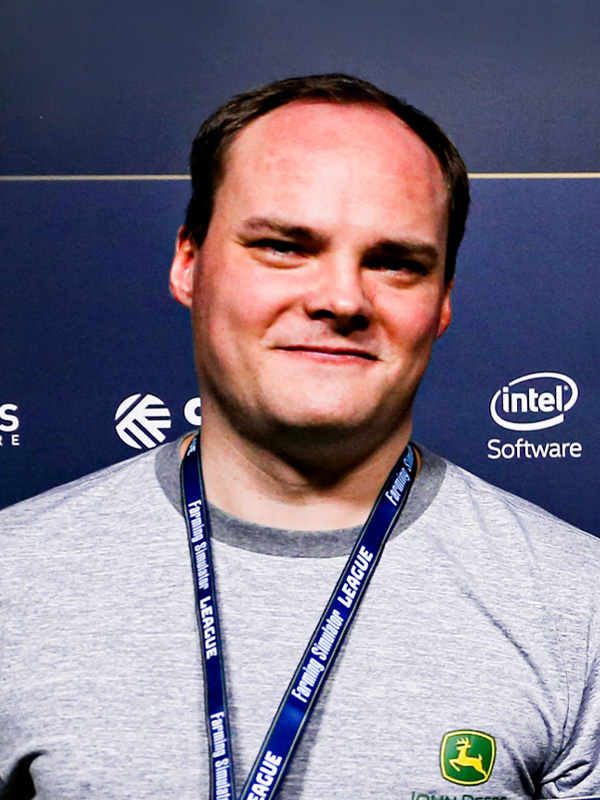 Markus Stein­müller is a member of the John Deere gaming team and has already had some “aha” moments thanks to the Preci­sion Farming exten­sion.

Ben: It was released at midnight, so we even took the next day off to really get into the simu­lator – just like in the old days, when we had much more time for these things.

What was your first impres­sion of the game?

Ben: We were really happy to see that Farming Simu­lator is even more real­istic now. Now entire produc­tion chains are shown and I can do much more than just feed my animals and run a biogas plant. For example, I can now make sure that my sugar beet is turned into sugar. Or, for grain, I can track the produc­tion chain in much greater detail.

Markus: These inno­va­tions in the game mechanics are a real win. You also notice that the devel­oper GIANTS Soft­ware has tweaked a lot of small things when it comes to graphics and sound, so the overall impres­sion is even more real­istic: Bales look even more like bales and machine and nature sounds seem a lot more real­istic. There are also other new features like the change of seasons, which players of previous versions will know from mods.

As members of the JD gaming team, over the past few weeks you have also been able to test the Preci­sion Farming expan­sion, which John Deere is helping to develop. What’s new there?

Markus: The new Preci­sion Farming upgrade builds on the last one, avail­able for Farming Simu­lator 19. So it contains all the features from the older version which have since been further improved. This includes different soil types, yield maps, prof­itability calcu­la­tions, and the ability to work accord­ingly by sub-area. 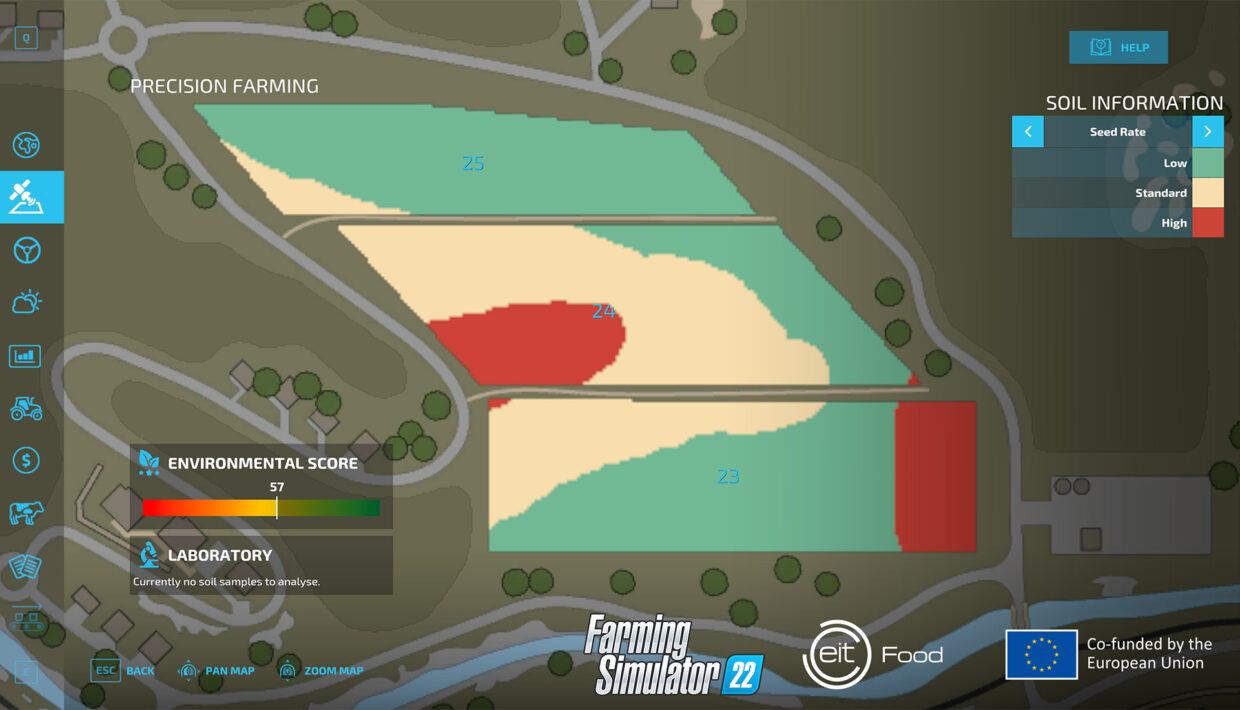 With the help of a prepared seed rate map ... 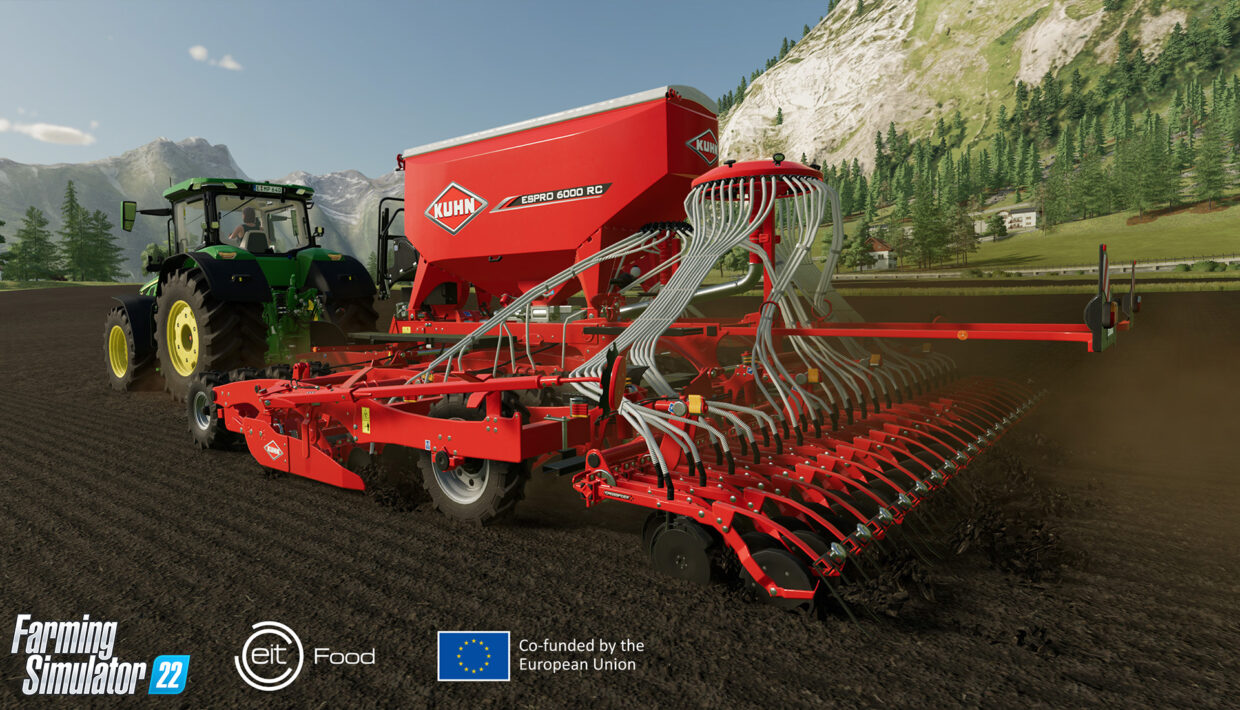 Ben: New addi­tions include more options to manage land in a more sustain­able and data-driven way. To start with, we have site-specific weed control with spot spraying and then real-time analysis of liquid manure during appli­ca­tion, as well as the possi­bility of better dosing mineral fertilisers. There is also a new envi­ron­mental rating system which shows players how the way they farm affects the envi­ron­ment. 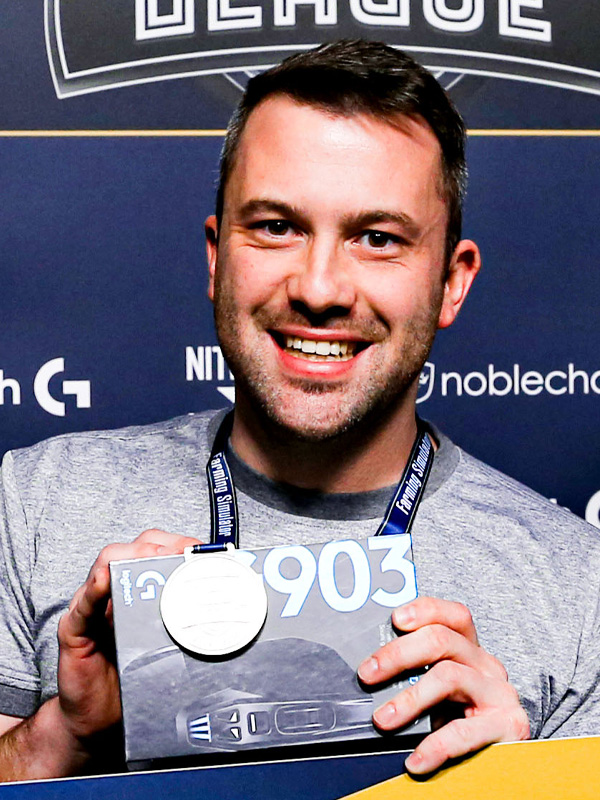 Benedikt Dahme is also part of the John Deere gaming team and espe­cially appre­ci­ates the realism of the Preci­sion Farming exten­sion.

How does Preci­sion Farming DLC change the gaming expe­ri­ence?

Ben: For me, the DLC takes the game­play to a whole new level. This is mainly due to the new features which make the game even more real­istic. And if you’re playing together as a team like we are, the envi­ron­mental rating system adds another nice compet­i­tive element to the game: You start to wonder why the other person has a better score, and then, most impor­tantly, how you can also improve.

Markus: Exactly. I’ve already had a few ‘aha’ moments just like that. Compared to the other testers, I found that I was much worse at effi­ciently spreading liquid manure without an NIR sensor. This is then visu­alised on an easy-to-read map. Another time, I felt that mechan­ical weed control with a large hoe was surely the most sustain­able way of working. Then, when I didn’t get the full envi­ron­mental score by doing that, I looked to see why that might be. The expla­na­tion: With the mechan­ical hoe, I drove across the field signif­i­cantly more often, inter­fering with the soil more than I would with spot spraying. This causes more erosion. The simu­lator makes corre­la­tions like these really clear. 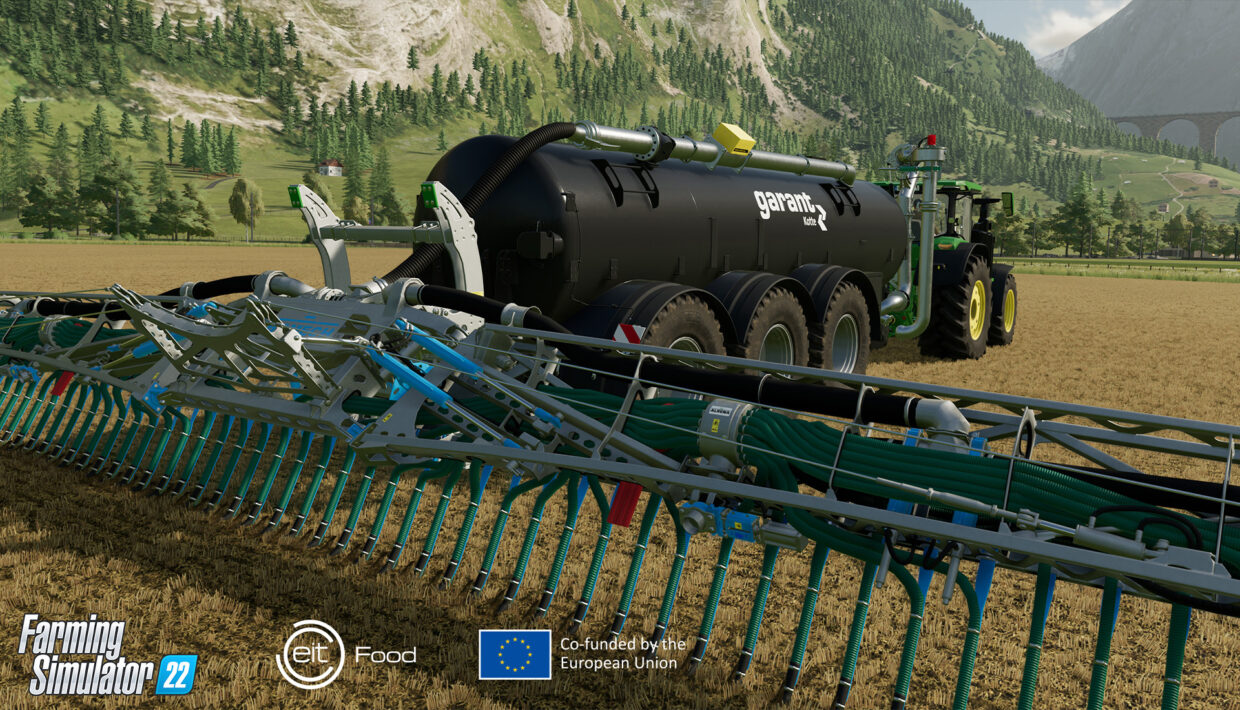 With the NIR sensor, plant nutri­ents in liquid manure can be used more effi­ciently in the Preci­sion Farming DLC Farming Simu­lator. 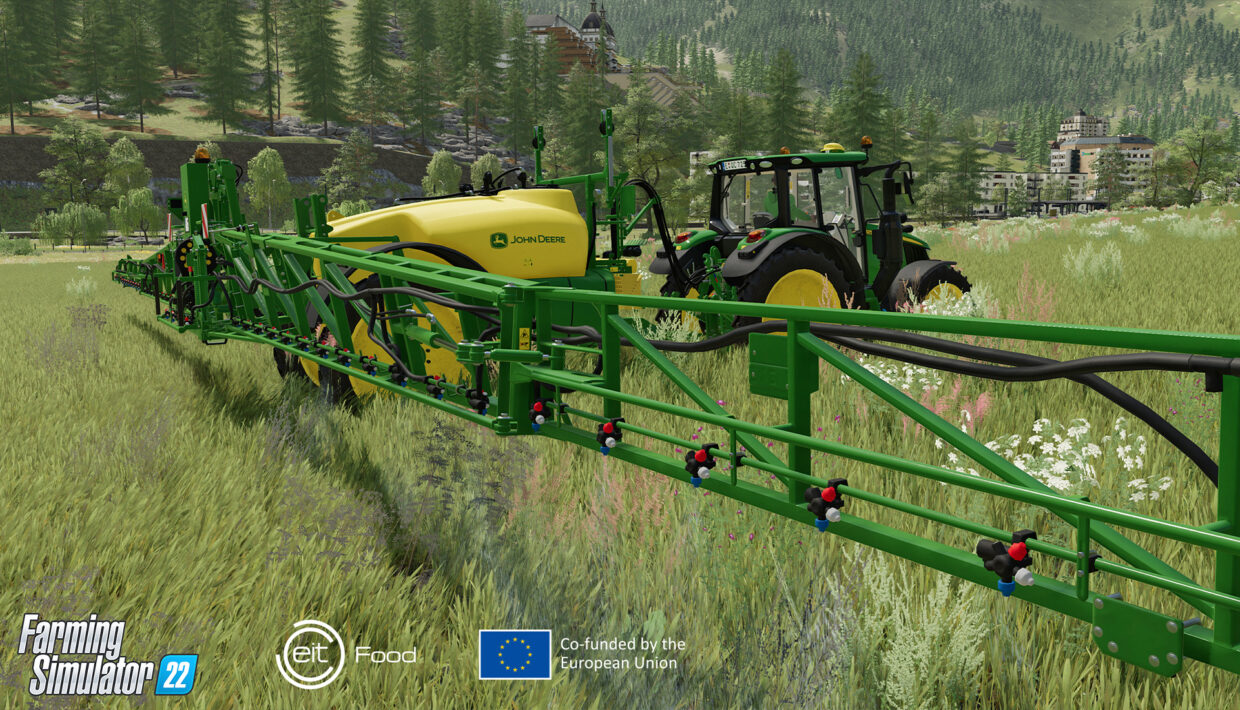 Preci­sion Farming DLC makes the simu­la­tion even more real­istic. How impor­tant is that to you?

Markus: It’s great when the simu­lator gets more and more real­istic, but too much realism can also be off-putting. For example, there used to be mods for ground condi­tions. But you couldn’t play with it without studying the hefty manual. That’s the beauty of the Preci­sion Farming upgrade: There are lots of tips but you can also switch to auto mode if you want to get started more easily – so realism that’s fun, really.

Ben: I agree. I would always say “the more real­istic the better”. But if it then gets too compli­cated to use, the fun is over quickly. That’s exactly what the new Preci­sion Farming mod won’t do and that’s what makes it so good.

The Preci­sion Farming exten­sion is avail­able for free from April 19 2022. You can down­load it directly to a PC or a games console. With more than one million down­loads, the first version of Preci­sion Farming Free DLC for Farming Simu­lator 19 was a great success. With the next gener­a­tion, GIANTS Soft­ware not only offers the general public the oppor­tu­nity to expand their knowl­edge of modern agri­cul­ture, but also brings sustain­ability to fore­front in the popular video game.

Preci­sion Farming Free DLC has been jointly devel­oped by John Deere and GIANTS Soft­ware, the devel­oper of the most successful farming simu­la­tion series. This was achieved in co-oper­a­tion with the Univer­sity of Hohen­heim, Univer­sity of Reading, the Polish Academy of Sciences and Spanish agri-food co-oper­a­tive Grupo AN. The devel­op­ment was largely financed by EIT Food, the world’s largest food inno­va­tion network, which is supported by the Euro­pean Insti­tute of Inno­va­tion and Tech­nology (EIT). The goal of EIT Food is to improve knowl­edge of modern agri­cul­ture in society.

Agri­cul­ture is gener­ating more and more data, and more and more farmers are engaging in preci­sion farming. Insightful facts and figures on the topic of digi­tal­i­sa­tion.﻿