Nowa­days, when it comes to weed control, farmers have a number of new, sustain­able and effi­cient agri­cul­tural tech­nolo­gies at their disposal. Apply the agtech correctly, and farmers can strike the perfect balance between meeting their legal require­ments and economic targets as well as improving agri­cul­tural sustain­ability.

High yields provide growing popu­la­tions with the food they need and farmers with the income they depend on. However, high yields can only be achieved by ensuring that crops reach full matu­rity and are protected against weeds. Such a task demands that farmers give equal consid­er­a­tion to effi­ciency, sustain­ability and prac­ti­ca­bility when choosing the right cultivation methods for their crops. Modern tech­nolo­gies and effi­cient farming prac­tices help farmers to apply crop protec­tion agents in a much more targeted and precise manner, bene­fiting not only the envi­ron­ment but also their own wallets.

One of these exciting new tech­nolo­gies now avail­able to farmers is site-specific (or selec­tive) weed control, based on the so-called offline method. In the first stage of the method, detailed infor­ma­tion is gath­ered about the exact condi­tion of a field and the weed popu­la­tion living there. The farmer can then use this infor­ma­tion to apply herbi­cides in the most targeted way possible.

We use the drone to take pictures to iden­tify differ­ences in vege­ta­tion and work with the infor­ma­tion.

The agtech start-up Humming­bird offers a prime example of how this weed control method can work in prac­tice. The UK-based start-up flies compact drones over fields to produce detailed maps of the crop popu­la­tion. Hendrik zu Knyphausen, vice pres­i­dent of oper­a­tions and head of Germany, Central and Eastern Europe at Humming­bird, explains: “By using the drones to take satel­lite images, we can recog­nise vari­a­tions in the vege­ta­tion. We then draw on this infor­ma­tion to produce prescrip­tion maps to facil­i­tate crop protec­tion.”

Once the drone has completed its flight, a clear picture emerges as to where in the field too many weeds have accu­mu­lated, according to the damage threshold prin­ciple of Inte­grated Pest Manage­ment, and which areas have been less affected. Humming­bird expert Mr Knyphausen explains: “The farmer can then see straight away whether or not it is neces­sary to spray a given area with a uniform appli­ca­tion rate, and can selec­tively apply herbi­cides according to the weed inci­dence. To draw on this infor­ma­tion and apply it ‘in the field’, the next step is to create a prescrip­tion map to facil­i­tate site-specific product appli­ca­tion. The map can then be uploaded directly from the Humming­bird soft­ware to the John Deere Oper­a­tions Centre.” From there, the map is trans­ferred wire­lessly or via USB flash drive to the sprayers in the field. 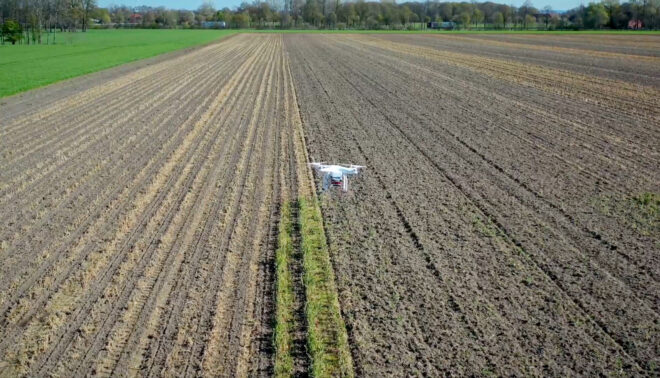 Once the drone has completed its flight over the field, ... 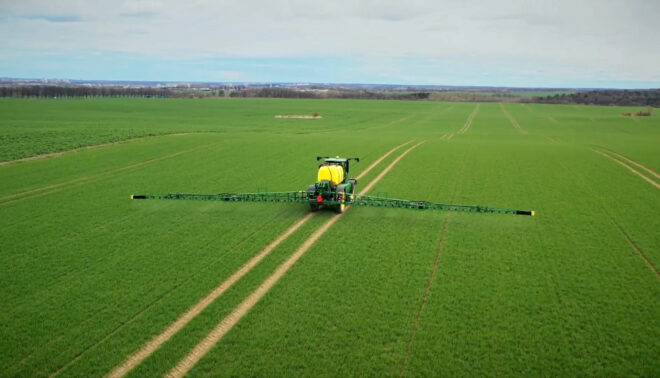 ... results in a picture from which it becomes clear where there are too many weeds in the field and which areas are less affected.

Once they have received the prescrip­tion map, the sprayer oper­a­tors then auto­mat­i­cally apply the crop protec­tion agent by precisely pinpointing the areas of the field where the weeds are present. Various John Deere tech­nolo­gies also do their bit to support tech­no­log­ical weed control efforts. The use of GPS tech­nology to auto­mat­i­cally control boom sections and indi­vidual nozzles ensures that crop protec­tion agents are only applied to the neces­sary field areas. The tech­nology also prevents large spray over­laps, which minimises the risk of over­dosing fields and saves on crop protec­tion agent at the same time. Ultra­sonic sensors also help ensure that boom sections are always at the correct height and incline over the crop, guar­an­teeing that the spray is opti­mally applied to the desired crop target area. This means that even small undu­la­tions in the field no longer pose a problem to spray accu­racy, and spray drift is minimised.

Hoe and sprayer working in unison 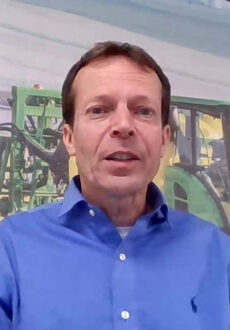 Even though the sprayer will undoubt­edly continue to be indis­pens­able in the future, it is by no means the only tool at a farmer’s disposal. Espe­cially in classic row crops, the hoe can be an effi­cient alter­na­tive or even supple­ment the use of sprayers. Here it becomes clear that, weather and soil condi­tions permit­ting, the hoe repre­sents a non-chem­ical solu­tion for weed control between rows that doesn’t endanger crop popu­la­tions. Jørgen Aude­naert, crop protec­tion specialist at John Deere, explains how even greater preci­sion can soon be expected from the humble farming tool. “The hoe defi­nitely has a lot of poten­tial and, at John Deere, we are also working hard to improve the produc­tivity and accu­racy of the tech­nology – after all, in the past, it has been the compar­a­tive inac­cu­racy and lower area output of the hoe which has often been an obstacle to its wider use.

“Together with Monosem, we are working on deliv­ering high-preci­sion hoeing tech­nology by combining camera and GPS posi­tioning tech­nology. This enables us to precisely posi­tion hoeing tools between crop rows, while main­taining active control of both the tractor and the imple­ment. With an increase in tractor driving speed from 8 to 16km/hr, we are achieving signif­i­cantly higher speeds than are typi­cally seen in mechan­ical weed control. The fully auto­mated tractor speed control ensures that the user achieves maximum produc­tivity along­side high control success and minimal crop damage.”

Jørgen Aude­naert is an expert in spraying tech­nology. For almost 25 years he has contributed to many tech­no­log­ical break­throughs like data collec­tion, arti­fi­cial intel­li­gence, sensor tech­nology and pulsing nozzles. He expects spraying tech­nology to further advance in the future, "but regu­la­tions will be deci­sive."﻿