Preci­sion farming can make farms more effi­cient, sustain­able and economic. But with the multi­tude of possi­bil­i­ties, the ques­tion often arises: “Where to start? We show exam­ples of three farmers who have dared to take this step and tell you how they did.

Auto­matic guid­ance and preci­sion tech­nology are finding their way onto many farms as the range of prod­ucts and services on offer becomes wider and more diverse. But how to get started? Three farmers tell us how they began, the obsta­cles they had to over­come, and what encour­aged them to stay engaged and carry on.

Close to the Teutobur­ger Wald in northern Germany, the Vogel­sang Farm fits harmo­niously into the land­scape. Tradi­tional brick build­ings, in some places, clearly bear the weight of their years. Behind this humble exte­rior, however, lies a highly advanced farm with regards to using preci­sion tech­nology. “It all started in 2010 with a StarFire receiver,” recalls Stefan Vogel­sang, 33, who runs the 160ha farm with its 1,000 pigs and 180 dairy cows. “My dealer gave it to me on a trial basis for a year. I was completely won over by the accu­racy of the guid­ance and immersed myself in its tech­nology and appli­ca­tion. This then led me to get an ISOBUS inter­face for the sprayer.” 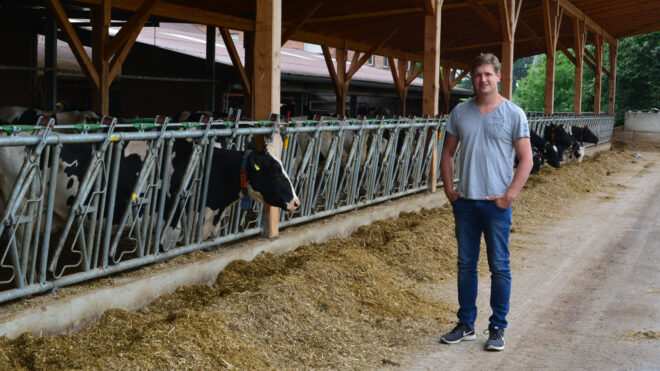 Some 10 years later, preci­sion farming prac­tices have been extended to most of the field work on the farm. From vari­able rate drilling and crop protec­tion prod­ucts to site-specific fertiliser and precise harvesting, all tasks are directly docu­mented via JDLink and with the help of yield maps the results are analysed.

When applying nitrogen fertiliser, Mr Vogel­sang uses real-time biomass measure­ment: A Next­farming GreenSeeker mounted on the front of the tractor measures the chloro­phyll level, and from there, the nitrogen require­ments of the plant are esti­mated. First, he defines the minimum and maximum doses along­side his fertiliser strategy. Then the centrifugal spreader adapts the dosage by adjusting the posi­tion and speed of the discs. “During the first pass across the field, the plants that are less green receive the most nitrogen, while during the final appli­ca­tion, nothing is spread on plants that are starting to ripen,” explains Mr Vogel­sang. Over the past three years he has also applied manure – which, due to the different types of animals kept on the farm, has widely ranging nutrient content – at vari­able rates with the help of an NIR sensor.

Since 2019, Mr Vogel­sang has adjusted the amount of lime spread according to the specific require­ments of the soil. Growth regu­la­tors are also applied at reduced rates where cereals show signs of stress, so as not to further impede their devel­op­ment. It remains to be seen what the impact on yield will be, but the benefit of preci­sion tech­niques is partic­u­larly clear when it comes to drilling. “We use biomass maps from the previous crop and vary seed rates accord­ingly. As a result, we are using 10% less seed.” Logi­cally, preci­sion drilling also influ­ences the produc­tivity of the plots, since the plants share the soil resources better, says Mr Vogel­sang. “This means more energy in the plant.”

Every­thing started with the StarFire receiver.

When getting started, it is impor­tant not to under­es­ti­mate the time required to fully under­stand and get the digital part of the equip­ment up and running, he advises. “Prac­tice makes perfect. Don’t be afraid to read the instruc­tions right through to the last page. I spent so many hours config­uring the guid­ance of my old John Deere 6910 to make sure drilling worked perfectly… Then, three days later, when the manure had to be incor­po­rated into the soil with a disc harrow, every­thing had to be repro­grammed. Now all I have to do is press a few buttons and I get the results I want.”

On the other side of the Channel, Bedfordia Farms, with 2,100ha of crops and 33,000 finishing pigs, is one of the pioneers in preci­sion farming in the region. All machines are equipped with Auto­Trac RTK, and the farm is in the process of intro­ducing controlled traffic farming (machine guid­ance on prede­fined reoc­cur­ring tram­lines) for all its work. Manure is applied at vari­able rates according to in-field soil vari­ability, based on different sources including soil samples, elec­tro­mag­netic conduc­tivity measure­ment, and yield maps. 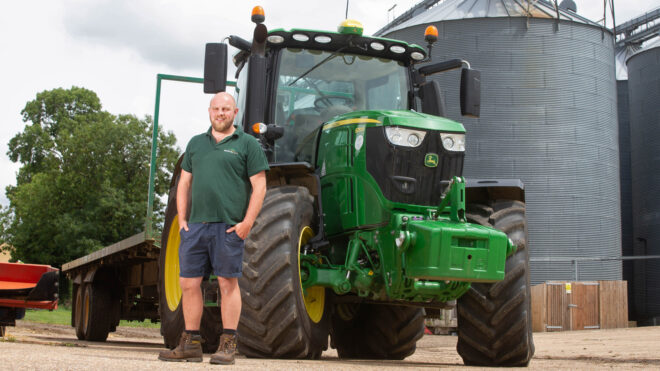 Jonathan Ibbett is co-managing director of “Bedformia Farm”, one of the pioneers of preci­sion farming in his region.

The farm produces high-protein milling wheat, so precise nitrogen supply is key; it is measured and adjusted directly via an on-board sensor (Yara N Sensor). Wheat features heavily in a six-year rota­tion (wheat, wheat, rape­seed, wheat, wheat, beans). Jonathan Ibbett, the assis­tant arable mananger, studied at the pres­ti­gious Harper Adams Univer­sity. Preci­sion farming was part of the course, but as he explains, it is primarily learned “on the job”. The only condi­tion: “An interest in tech­nology. And you must also have an interest in making marginal improve­ments – analysing data and under­standing where you went wrong.”

Mr Ibbett started vari­able rate seeding in 2014. “But we didn’t have a clear plan. We stopped after two years and went back to flat rate as it was easier.” In 2018 he moved back into vari­able rate seeding with support from Agrii. They decided to base the sowing on NDVI vege­ta­tion index maps, yields and historic field knowl­edge, and since then crops have started to become more even. “You’ve got to be open and accept your limi­ta­tions,” he says. “There are better people to point you in the right direc­tion if you know the right ques­tions to ask.” And here’s another impor­tant point to remember: “There is a lot of tech­nology out there which won’t give an evident return. If you’re trialling that tech­nology, you need to have a good plan for it. And once you’ve adopted some­thing get as much out of it as you can.”

One of the next steps will be through compiling all the avail­able data. “We want to find the most prof­itable areas of the farm and farm them well, and use the less prof­itable areas for exten­sive manage­ment or envi­ron­mental manage­ment schemes.” In the more distant future, the Bedfordia team would like to use the wealth of infor­ma­tion to “bring yields closer to the genetic poten­tial of plants”.

By recording every input, along with soil temper­a­ture and mois­ture, it is possible to see where poten­tial is drop­ping off, says Mr Ibbett. “You should be able to track the health of your plant and get ahead of the game – predicting and treating diseases before they become an issue.”

In Brit­tany, the agri­cul­tural contracting company (ETA) Elorn has recently embarked on preci­sion farming. In this case, the impulse came from the firm’s customers. “With seven employees, we carry out all services from sowing to harvesting within a radius of 20km,” says Kevin Quiv­ouron, who took over the company in 2013. 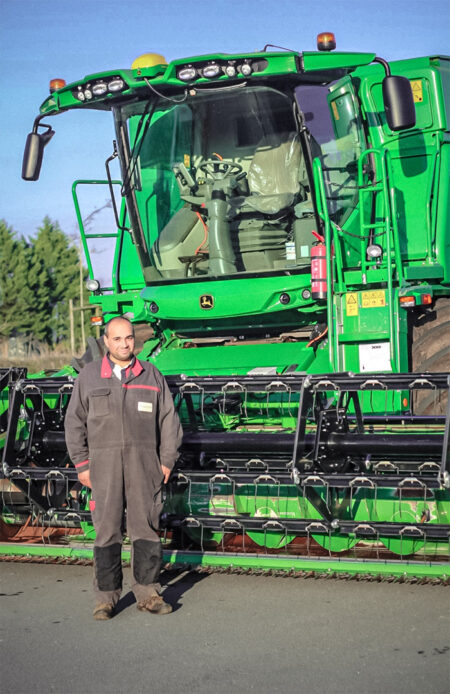 “I started in a rather atyp­ical way,” he says. When buying his fifth combine in 2017, Mr Quiv­ouron went for the option of yield and mois­ture measuring to offer added value to his customers. The feed­back was posi­tive: “Many customers told me this helped them to better know and under­stand their fields.” Elorn has there­fore opened partner accounts for its customers on MyJohn­Deere. “They quickly pointed out to me: You have the tools to check yields, you should think about preci­sion farming.”

My customers asked me to try vari­able rate appli­ca­tion.

In 2019, the company there­fore acquired a new fertiliser spreader and customers now provide satel­lite biomass maps via their co-oper­a­tive. “On 20% of our harvested acreage nitrogen fertiliser is spread at vari­able rates, and that percentage will increase next season.” After a year, the result is clear. “In some areas, we got up to 1t/ha more yield in rape­seed and 2t/ha in wheat. Even if this gain is also linked to soil quality, yield maps show that the improve­ment is related to more uniform plant devel­op­ment,” says Mr Quiv­ouron. “This is confirmed by tests we have conducted with and without vari­able fertiliser rates.”

Vari­able rate seeding is another part of the project. On the hilly land of Brit­tany, the soils are very mixed, and this is really felt at harvest time. “We have prob­lems with germi­na­tion and seedling emer­gence. Vari­able seed rates should help to achieve better results.”

A need for contin­uous training

As employees were expe­ri­encing diffi­cul­ties with the new equip­ment, the entire team partic­i­pated in training at the deal­er­ship. “There’s so much stuff in consoles today, it’s hard to know how to operate it all,” says Mr Quiv­ouron. “Creating a guid­ance track is not diffi­cult but defining the perimeter of a plot was a bit more compli­cated for the employees. Even­tu­ally we will have no choice but to organise further regular training within the company because every new machine has a little more tech­nology.”

In France, where there is a shortage of qual­i­fied drivers, this devel­op­ment compli­cates hiring, notes the entre­pre­neur. “We need to look for employees with a higher level of educa­tion and computer literacy.”

So where should farmers new to the tech­nology begin? “Based on my expe­ri­ence: Don’t try to save when buying the steering system, other­wise you’ll get frus­trated with the result and stop. I made that mistake at the start. You have to make a reason­able invest­ment; you’ll notice the differ­ence imme­di­ately and this is what will create the desire to go further.”
Mr Quiv­ouron also puts the cost of guid­ance into perspec­tive: “As long as the farm has several trac­tors, the actual invest­ment per machine is reduced since a system like Auto­Track can be switched from one machine to another.”

What was previ­ously only possible with different indi­vidual soft­ware tools, the John Deere Oper­a­tions Centre is combining into one easy-to-use solu­tion: All work oper­a­tions in the palm of your hand – on your desktop, tablet, and smart­phone.﻿

A lot has happened on farms in recent years in terms of digital moderni­sa­tion. Although it is diffi­cult to predict where all these complex devel­op­ments will lead, new options are emerging for many farms to meet future chal­lenges. ﻿