A lot has happened on farms in recent years in terms of digital moderni­sa­tion. Although it is diffi­cult to predict where all these complex devel­op­ments will lead, new options are emerging for many farms to meet future chal­lenges.

All is peaceful and quiet in Ignatz Heeremann’s cowshed. The new open building boasts both optimal temper­a­ture and humidity, with a sensor above the slatted floors perma­nently moni­toring methane and ammonia levels. The elec­tric feed robot makes its rounds silently, pushing up the grass silage, which has been checked for protein content, pH and other nutri­tional para­me­ters by photo­elec­tric sensors directly at the silage clamp.

A total of eight milking robots, driven by renew­able energy, carry out their job according to pre-programmed input. The milk flows abun­dantly – so does the data. It flows into the control centre, where two employees per shift check the produc­tion of the 400-strong dairy herd both metic­u­lously and conve­niently via several screens. The health of the animals is also indi­vid­u­ally moni­tored: Body temper­a­ture, weight, various blood and hormone values as well as the acid compo­si­tion in the rumen are just a few of the para­me­ters which are trans­mitted in real time to a data­base and graph­i­cally processed in a sophis­ti­cated way using clever soft­ware. 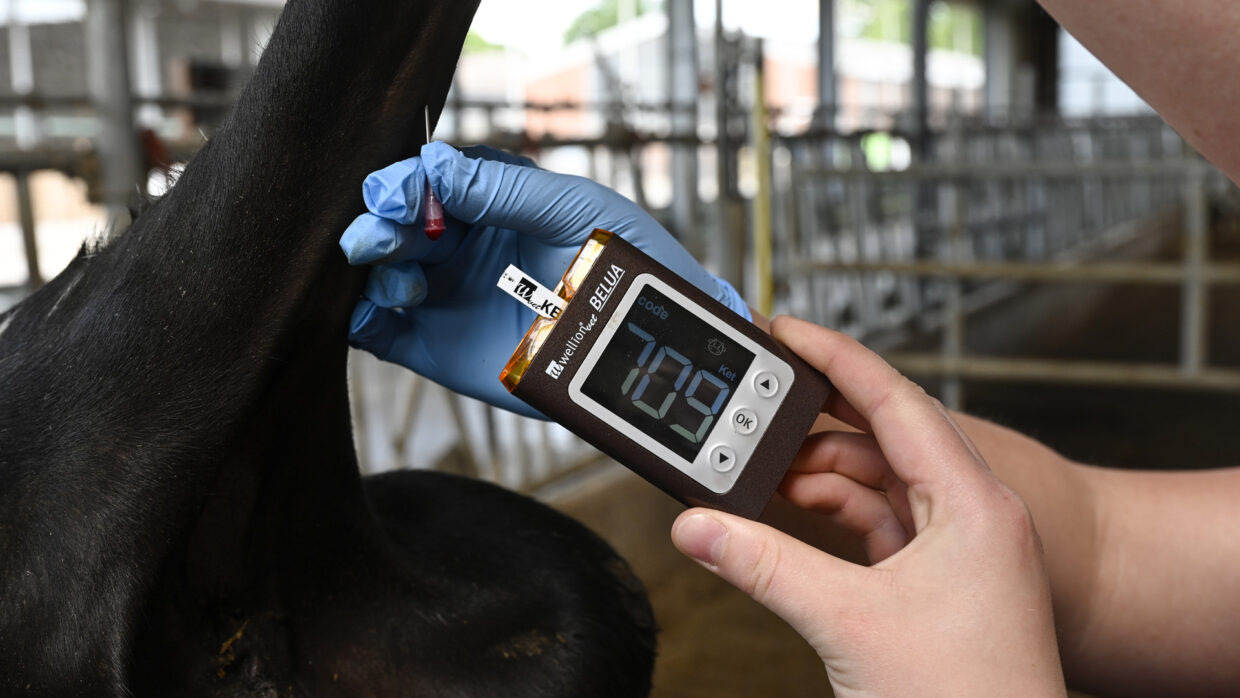 The future of modern dairy farming?

Welcome to the ‘brave new world of cattle sheds’. Is this what the future of modern dairy farming looks like? Who knows exactly, but in any case the devel­op­ment is proceeding at a fast pace; because the situ­a­tion described in the ficti­tious barn by the ficti­tious farmer Heere­mann is already, at least in part, already common prac­tice in many barns. So the ques­tion is no longer whether digi­tal­i­sa­tion will take place in live­stock farming and broader agri­cul­ture, but rather how and at what pace it will take place.

A study published in spring 2020, jointly commis­sioned by the Federal Asso­ci­a­tion for Infor­ma­tion Tech­nology, Telecom­mu­ni­ca­tions and New Media (Bitkom), the German Farmers’ Asso­ci­a­tion and the German rural devel­op­ment agency Renten­bank, demon­strates just how far German agri­cul­ture has actu­ally come in terms of digi­tal­i­sa­tion.

Some 500 German farmers took part in the survey, which revealed that more than eight out of 10 farms already use digital tech­nolo­gies and another 10% are plan­ning to use them in the future. In the study, which was conducted shortly before the Corona pandemic, 81% of the farmers surveyed confirmed that digi­tal­i­sa­tion primarily increases their produc­tion effi­ciency. Some 79% named phys­ical relief as another impor­tant advan­tage, and more than one in two (57%) also empha­sised a better work-life balance.

And most farmers strongly believe that the envi­ron­ment and animals can benefit from digi­tal­i­sa­tion: 93% firmly believe that digital tech­nolo­gies can help save on the use of fertilisers, pesti­cides and other resources. They facil­i­tate a more envi­ron­men­tally friendly produc­tion process – a robot does auto­mated hoeing, instead of spraying with crop protec­tion chem­i­cals. Given this assess­ment, it is not surprising that seven out of 10 farmers stress that digi­tal­i­sa­tion is in prin­ciple a great oppor­tu­nity for more sustain­able agri­cul­ture.

GPS-guided agri­cul­tural machines are popular: They are now used by many farmers. But it’s not just in the field – there is a lot of digi­tally controlled move­ment in the barn as well. Intel­li­gent feeding systems are already in use on almost every second live­stock producer. Some 40% of all farmers now work with agri­cul­tural apps on their smart­phone or tablet, and 40% also use farm or herd manage­ment systems. 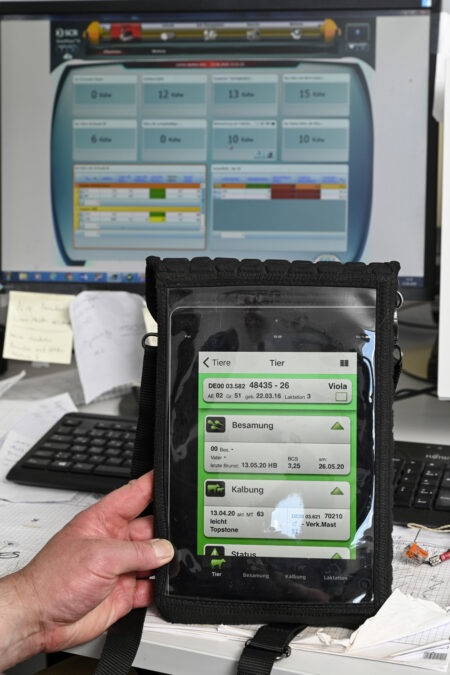 Rein­hold Koch of the LBZ in Echem is digi­tally “networked” with his cows: with the iPad in the stable and with several computers in the office.

It is obvious that all of these tech­nolo­gies have an impact on the work of veteri­nar­ians. “These are devel­op­ments of our time, there is no stop­ping them,” says vet Dr. Siegfried Moder. “Although by no means every­thing per se has to be approved of and digi­tal­i­sa­tion alone does not bring any advan­tages in animal husbandry, a profes­sional eval­u­a­tion of the data obtained by sensors and cameras offers great oppor­tu­ni­ties for prophy­laxis and thus ulti­mately also for animal health.

Thus Moder, Pres­i­dent of the Bundesver­bandes Prak­tizierender Tierärzte e. V. (bpt), (Federal Asso­ci­a­tion of General Prac­ti­tioners of Veteri­nary Medi­cine), in which around 9,000 veteri­nar­ians are organ­ised, is an avowed supporter of digi­tal­i­sa­tion. For the 63-year-old it is there­fore a matter of course to work on farms with his laptop under his arm. “But as I said before, in the end it always depends on what they do with the data they obtain from the digital appli­ca­tions in the end, and what measures they derive from them.”

Moder gives exam­ples: “In this way you can see in good time whether your calves are healthy or whether they are about to fall ill by measuring the temper­a­ture on the surface of the suction cup. Or the farmer can make use of ‘intel­li­gent ear tags’, which on the one hand allow a quick loca­tion of the animals, but on the other hand also indi­cate whether a cow is in heat or has an impending udder disease”. 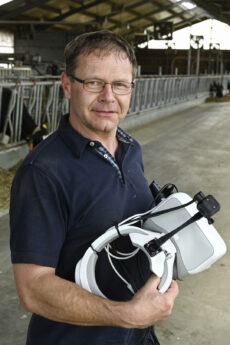 Benito Weise sees the world through the eyes of a dairy cow with digital cow goggles.

These new approaches to indi­vidual moni­toring of animals in a large herd, Moder continues, offer completely new options and qual­i­ties in veteri­nary care and diag­nos­tics. Provided, however, that the “master of the data”, the farmer, that is, also freely commu­ni­cates this data to the veteri­nar­ians. his data flow has suffered some­what in recent years for various reasons.

Progres­sive telemed­i­cine and digi­tal­i­sa­tion could there­fore help to bring vets and farmers closer together in the inter­ests of animal health. “What matters is the produc­tive life­time of the cows, which unfor­tu­nately is no longer than three lacta­tions on average,” says dairy expert Dr Moder, who predicts a move away from too one-sided a focus on perfor­mance to facil­i­tate greater longevity.

And with regard to focus… cow goggles devel­oped at the Agri­cul­tural Educa­tion Centre (LBZ) Echem defi­nitely offer a change of perspec­tive. Whoever straps this futur­istic-looking device in front of their eyes can see every­thing from the perspec­tive of a cow: Two-coloured, extremely contrasting, with a field of view of 330 degrees, of which however only a rela­tively narrow segment is sharp, on top of that, cows have a much slower adapt­ability of the iris. To simu­late all this opti­cally, highly complex soft­ware is required, as project manager Benito Weise reveals.

When he stalks around between the cows in the EBZ’s barn, it may look a little silly, but these goggles give every owner impor­tant insights into why the suppos­edly ‘stupid cow’ is not stupid at all.

Anyone who looks through these goggles will gain a deeper under­standing of the animal.

“Anyone who looks through these goggles will gain a deeper under­standing of the cow, and develop a new empathy for the animal,” says Mr Weise, who is intro­ducing the goggles to both agri­cul­tural trainees in Lower Saxony and hoof trim­mers. It is not only the cows’ different visual percep­tion that is impor­tant; the back­ground noise in the barn also plays an outstanding role for their well-being, which is why Echem is also working on the devel­op­ment of a ‘cow ear’. “It is precisely those frequen­cies that we humans simply do not perceive at all, that cows can expe­ri­ence as highly disturbing.”

Rein­hold Koch, a trainer who is jointly respon­sible for manage­ment of the 150 cows at the LBZ, is also funda­men­tally open to tech­nical inno­va­tions. This is mainly due to the fact that ‘Smart Dairy’ is firmly anchored in his daily work –apart from that, the robot is never in a bad mood. 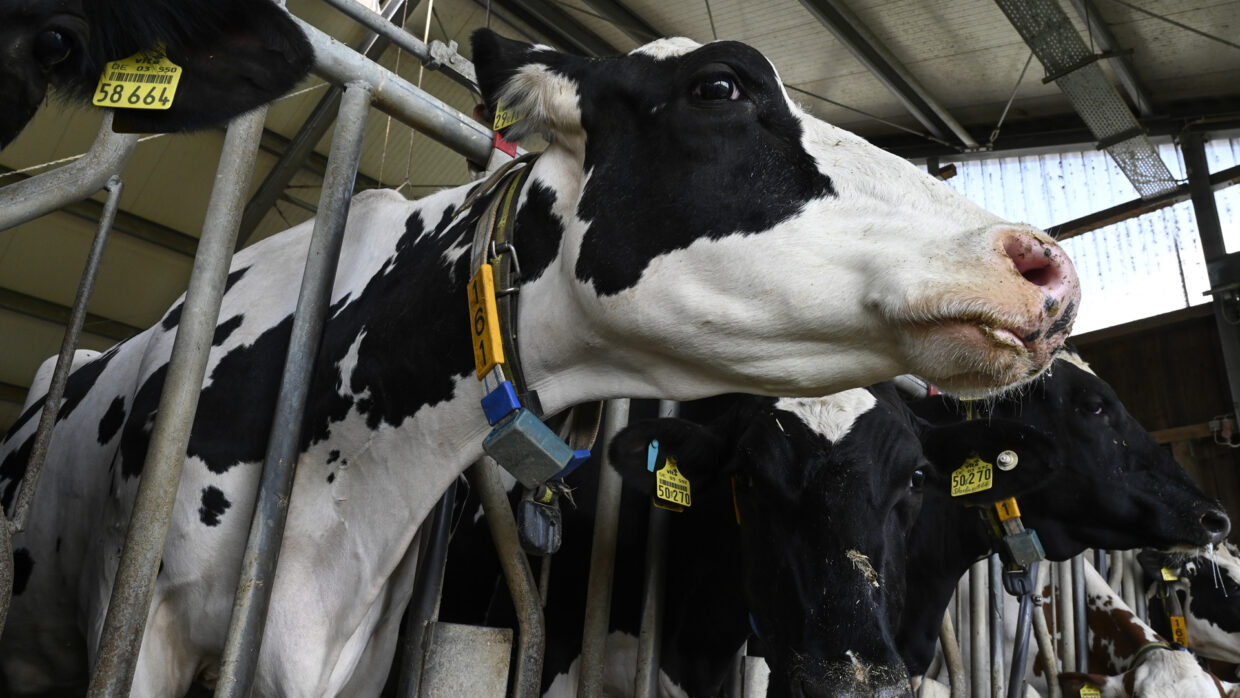 Dairy cows with sensors and motion detec­tors for oestrus deter­mi­na­tion on the collar. 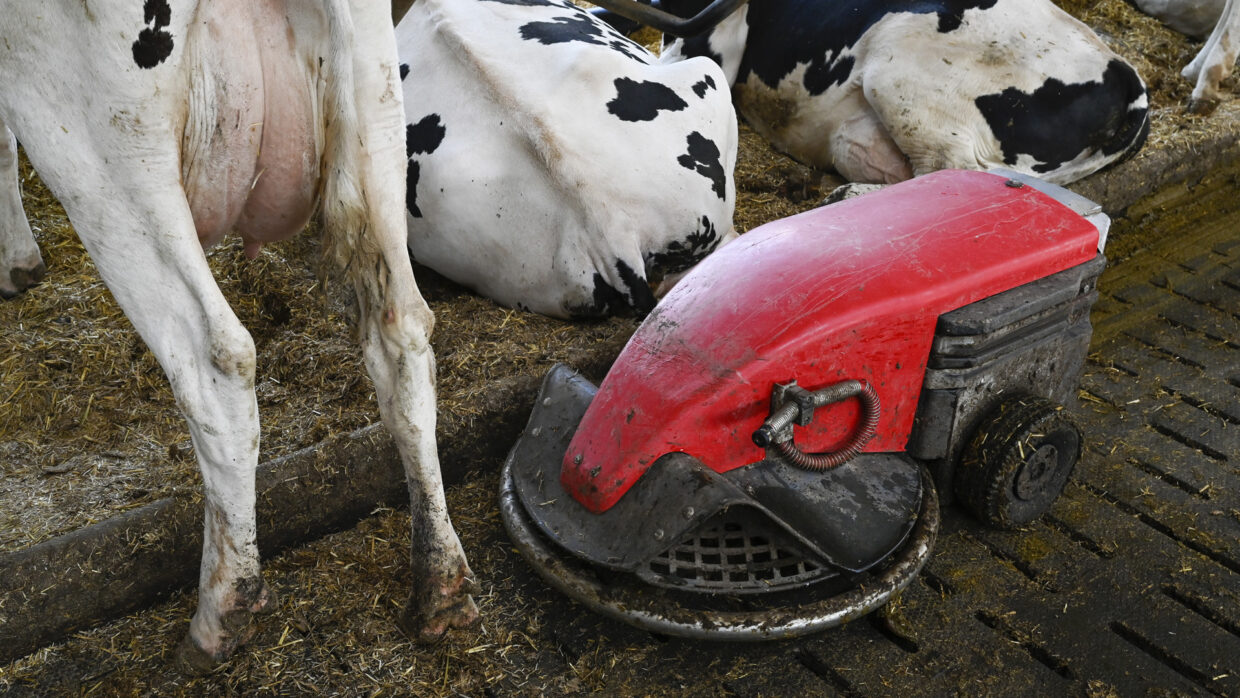 Sitting in front of several screens, Mr Koch explains how he handles combined oestrus and feeding programmes. “If the sensor on the collar reports falling jaw activity, we find out about it quickly and can take action,” he says. Topics like digi­tally cata­logued genomic breeding value esti­ma­tion, elec­trical conduc­tivity measure­ment of milk or ad hoc ketone measure­ment, show how diverse the digital fields of appli­ca­tion already are.

All these tech­niques provide a lot of data that was previ­ously not easily and quickly avail­able to dairy farmers. “Data is impor­tant, but it is not every­thing,” says the 57-year-old. “It cannot replace the trained eye of the farmer.” Mr Koch’s trainee Kristina Dralle, who wants to take over her family’s dairy farm in the Gifhorn district of Germany together with her brother in a few years’ time, does not contra­dict her boss at this point, but empha­sises unequiv­o­cally that “digi­tal­i­sa­tion is quite simply neces­sary.”

What was previ­ously only possible with different indi­vidual soft­ware tools, the John Deere Oper­a­tions Centre is combining into one easy-to-use solu­tion: All work oper­a­tions in the palm of your hand – on your desktop, tablet, and smart­phone.﻿