Brazil is known for its soya cultivation and rain­forest, however agri­cul­ture in this economic super­power involves more than that. A lot of Brazilian farmers also look at the longer term and work on ensuring healthy soil.

Farmer Rogério Pacheco is bent over amongst his soya plants. With a knife he pokes into the red soil as the sun burns on his straw hat. “Look!” he proudly points. “Just like I said: The soil is teeming with life.” Two worms snake across each other and try to find a way through with­ered plant mate­rial.

He grabs a handful of plant residues. “This is our humus.” Then he points to the half-rotted maize stalks, remnants of the previous crop. “We haven’t ploughed since 1991. It caused erosion. During torren­tial rains the soil was washed down from the hills and took our crops with it. By not ploughing we main­tain the struc­ture of the soil and the soil organ­isms remain intact. In addi­tion, this also improves the water-reten­tion capacity of the soil. I dare say that direct sowing is the salva­tion of Brazilian agri­cul­ture. “ 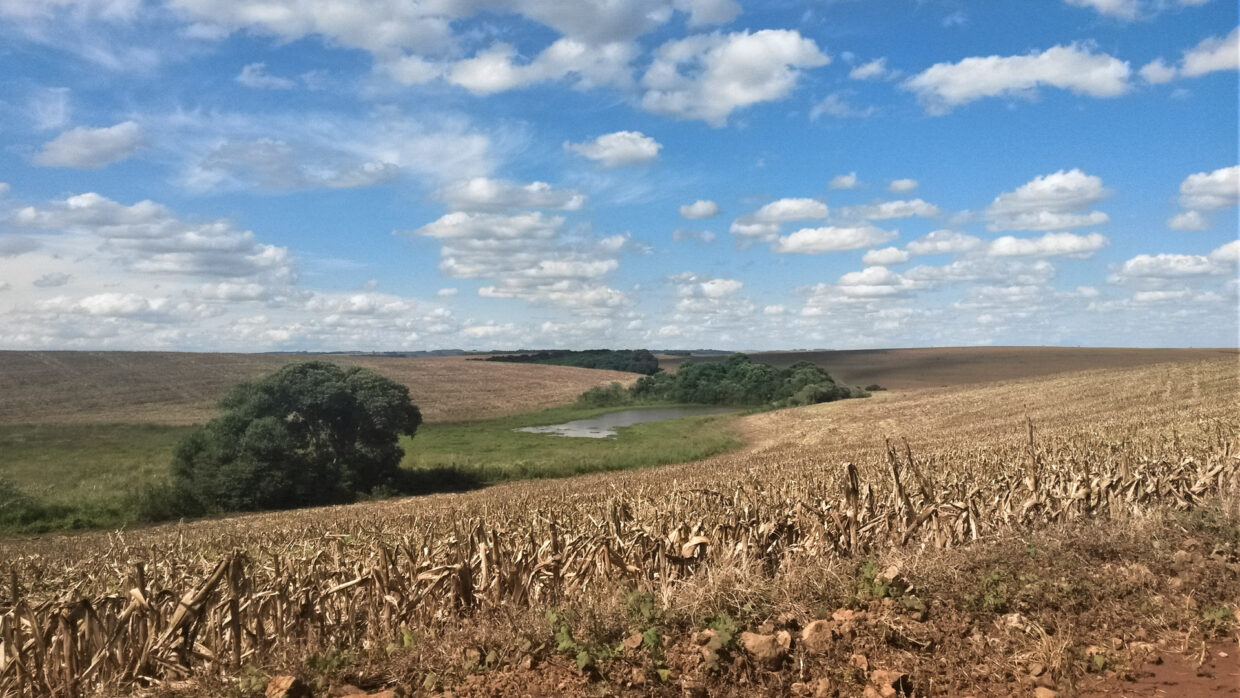 Brazil is well known for its vast soya fields. The country is about 8.5m km2. About 9% of the surface is used for agri­cul­ture.

Mr Pacheco has an arable farm in the southern state of Rio Grande do Sul, some 1,000km south of São Paulo, the largest city in Brazil. He has 1,000ha of land, of which 800ha is arable land and 200ha is uncul­ti­vated. He is the third gener­a­tion in the family busi­ness and is happy to take the lead. For the past 10 years his focus has been on preci­sion farming. He regu­larly takes soil samples, measures maize yields during combining, uses satel­lite data to visu­alise and assess his land and collab­o­rates with a local machine manu­fac­turer when it comes to testing preci­sion tech­niques.

His entire busi­ness is focused on improving soil quality. His crop choices are based on this: He grows oats to improve subse­quent soya rooting in the rota­tion. Prior to planting maize, he grows sorghum or wild peas as a green manure. Its straw supplies nitrogen. “That produces 90kg/ha of pure nitrogen for my own use. I only spread potash when the soil sample says it’s neces­sary and phos­phate as required. If neces­sary, I scatter lime after harvest.”

By not ploughing we main­tain the struc­ture of the soil and the soil organ­isms remain intact.

Over the past five years in partic­ular, he has noticed that more and more compa­nies are engaged in preci­sion farming. “Previ­ously, the required knowl­edge and suit­able machinery were not avail­able: Soil samples were taken haphaz­ardly, and GPS was too inac­cu­rate. If we still intend to farm here in 50 years’ time, we will have to focus on improving soil quality. ” 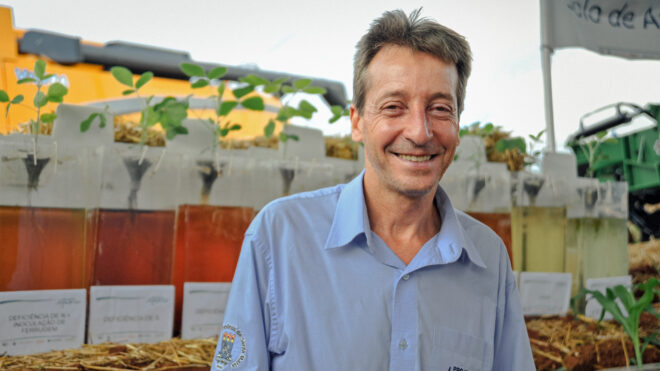 Professor Telmo Jorge Carneiro Amado: “We initially focused on reducing nitrogen use, now we are focused on the whole picture.”

Mr Pacheco is not the only one who under­stands this. As a member of the farmers’ co-oper­a­tive Cotrijal, he is closely involved with the latest devel­op­ments. In Não-me-toque, the city also known as the capital of Brazilian preci­sion farming, this co-oper­a­tive works closely with the Univer­sity of Santa Maria and a local machine manu­fac­turer, as part of the Aquarius project.

The aim is to raise Brazilian preci­sion farming to a higher level. “In 2001 our univer­sity was the first in Brazil to collect soil data,” says Professor Telmo Jorge Carneiro Amado. “That went pixel by pixel with soil sensors. The satel­lites and drones came later. They allow moni­toring the field during the vege­ta­tion period.

“We initially focused on reducing nitrogen use, now we are focused on the whole picture. After all, Brazil is the largest consumer of arti­fi­cial fertiliser in the world, so if we can refine preci­sion farming, the advan­tages will be enor­mous.”

The prin­cipal inves­ti­gator adds: “The Brazilian soil suffers every­where from a shortage of phos­phate and potas­sium. Arti­fi­cial fertiliser (NPK) is easily avail­able and ensures a high crop yield. But Brazilian farmers are trying to save money, they buy fungi­cides, but forget to invest in nutri­ents. They need to learn to look at the entire soil system. We need to bring our knowl­edge to those farmers.”

That works to a certain degree. The use of pesti­cides is declining, and soil maps show that the soil is more uniform and gener­ates more revenue than 10 years ago, according to Mr Amado. 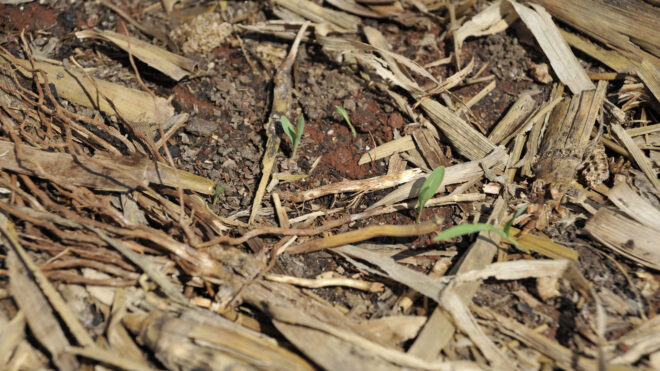 By not ploughing the soil life increases. The pres­ence of earth­worms is the evidence of that.

But that does not mean the sector can rest on its laurels. Although the members of the co-oper­a­tive are already convinced of the advan­tages of a healthy soil and are immersing them­selves in preci­sion farming, a large section of Brazilian farmers are scep­tical. “They are primarily focused on the short term,” says Mr Amado. They go for cash crops and only think of profit. They think that depleting the soil in this way is of secondary impor­tance. That´s really a shame. They use the argu­ment that their grand­fa­ther never worked with yield maps and soil analyses, so why should they,” sighs the professor. “Fortu­nately, the younger gener­a­tion of farmers are more open to it. That gener­a­tion is much more digi­tally orien­tated and sees the added value of it.”

Never­the­less, in a vast country like Brazil it is precisely that digital aspect which remains an obstacle to be surmounted. “The poor internet coverage leads to prob­lems. The connec­tion between the machine on the farm and the office is some­times lost.”

Looking after the soil

Agri­cul­tural engi­neer and farmer Fran­cisco Souilljee studied preci­sion farming for years. He measures yields during the maize harvest and has his soil analysed. He bases his fertiliser program on yield maps, and every 10 days he receives satel­lite images of his land.

As early as 1995 he decided to not plough and rather sow his crops without disturbing the surface. He carried out various tests on his 700ha of land, including the use of vetch as a catch crop. “By using vetch my fertiliser demand was greatly reduced. For example, with maize we can have two harvests and I now only need to spread 150kg/ha of nitrogen per crop instead of 400kg per year previ­ously. It is a natural form of fertiliser. We must first look after the soil prop­erly. Only then can we focus on higher yields.” 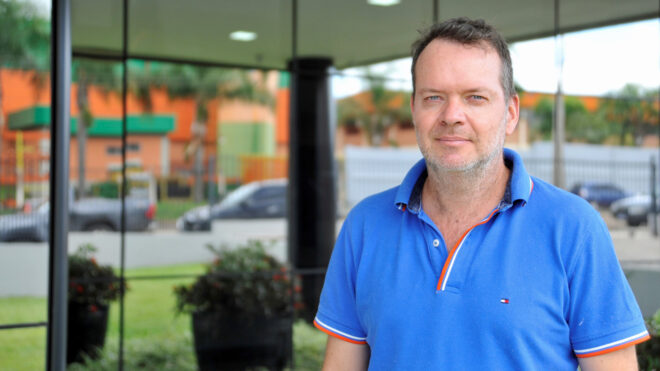 Mr Souilljee’s grows oats, maize and soya, and produces 12t/ha of maize: “In the US, the yield can be higher, and we should be able to reach that level too.” With soya, he achieves 5.8t/ha, but believes that 7t is possible if it is grown within a crop rota­tion. “Preci­sion farming is one thing, but there is a limit to what is prof­itable and what is not. You can invest more and more, but that also increases your risk. There­fore, crop rota­tion is very impor­tant to reduce risk and it leads to higher yields too.”

He knows mono­cul­ture is a problem. “Many farmers grow cash crops, but do not see what that does to the soil in the longer term. They sell the land again when the yields decrease.”

In addi­tion, corrup­tion is still a major issue. Seed traders mix bad and good quality seed and sell it at high prices as ‘good’ seed. “As a farmer, you only notice it when your crop hardly grows. These are addi­tional chal­lenges that farmers have to deal with here.” 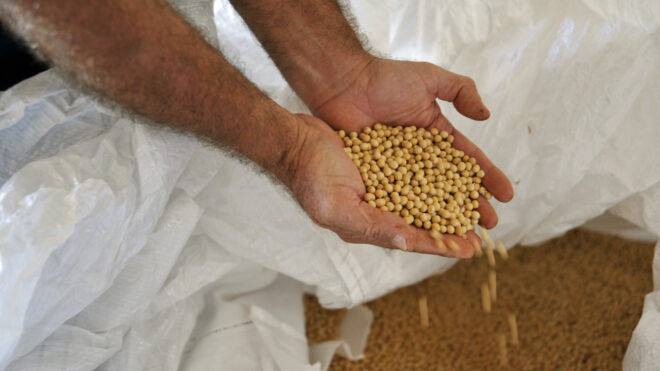 Soy is one of the main crops of Brazil. 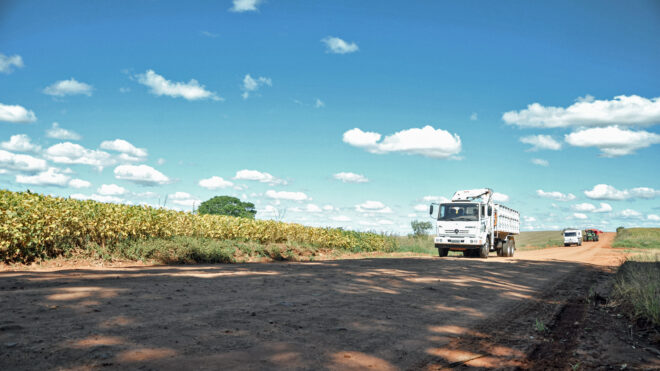 During harvest, a lot of trucks are needed to trans­port the soybeans.

Mr Pacheco has now returned to his office. If he has a good internet connec­tion, he can see exactly what is happening on his farm at that moment, and where his machines are. “This is really the future,” he points out. “Since I started preci­sion farming and paying more atten­tion to crop rota­tion, I have demon­strably higher yields.”

Since I started preci­sion farming and paying more atten­tion to crop rota­tion, I have demon­strably higher yields.

He first produced 3.9t/ha of soya, now it´s 5.1t. His maize yield has more than doubled: From 7.2t/ha to 15.0t. “I really owe that higher yield to three things: Direct drilling, a broad crop rota­tion and preci­sion farming,” he says. “I hope to be able to convince more Brazilian farmers with these figures, because if we want to continue to offer cheap food to the entire world, tech­nical and genetic improve­ments are neces­sary.”

Brazil in a nutshell

Brazil is, with 8.5m km2, the largest country in South America. It has a popu­la­tion of 208m people (2017). About 9% of the surface area of Brazil is used for agri­cul­tural purposes. 23% of the labour force works in agri­cul­ture. Brasilia is the capital, but São Paulo is the largest city in the country with over 12m inhab­i­tants. The offi­cial language is Portuguese.

Brazil has the largest economy in Latin America. The country has highly devel­oped agri­cul­tural, mining, indus­trial and service sectors. It has an abun­dance of natural resources such as oil and iron ore.

The prevailing climate is trop­ical maritime. In the North it is primarily a trop­ical rain­forest climate, with high average temper­a­tures of more than 26°C.

Cattle, pigs and sheep are the most numerous live­stock, and timber is also impor­tant. 45% of the total export revenue orig­i­nates from the agri­cul­tural sector.

Agri­cul­ture in Brazil is in partly well devel­oped, but improve­ments can still be made. Agri­cul­tural produc­tion in Brazil is expected to increase in the coming years, as millions of hectares of land are still avail­able for cultivation. Due to the climate, several crops can take place per year.