In southern Mexico, researchers have discov­ered giant maize with aston­ishing prop­er­ties. Other vari­eties can benefit from this.

Getting cereal crops to fix atmos­pheric nitrogen is a long-standing goal for plant researchers and breeders. Now, in the case of maize, this goal has unex­pect­edly been brought closer, with the discovery of an old Mexican variety able to cover between 30 and 80% of its nitrogen require­ments through bacte­rial symbiosis. Actu­ally, the variety has been known by Native Amer­i­cans for a long time. “Subsis­tence farmers in the Oaxaca region have been farming it for hundreds of years as a food crop,” explains Dr Jean-Michel Ané, who studies the features of the plant at the Univer­sity of Wisconsin in Madison, USA. “It is tradi­tion­ally sown in ‘clus­ters’ of five to six seeds and grown without fertiliser, reaching a height of up to five metres. This brought us to the ques­tion: How does this giant maize plant satisfy its high nitrogen require­ments under condi­tions like these?”

Eight years of testing have uncov­ered a trait which was previ­ously unprece­dented among the grass family. The Oaxaca maize’s aerial roots secrete a mucus-like gel which is colonised by Azospir­illum and Herbaspir­illum bacteria. These genera of bacteria other­wise live on the soil surface and are able to absorb nitrogen from the atmos­phere. 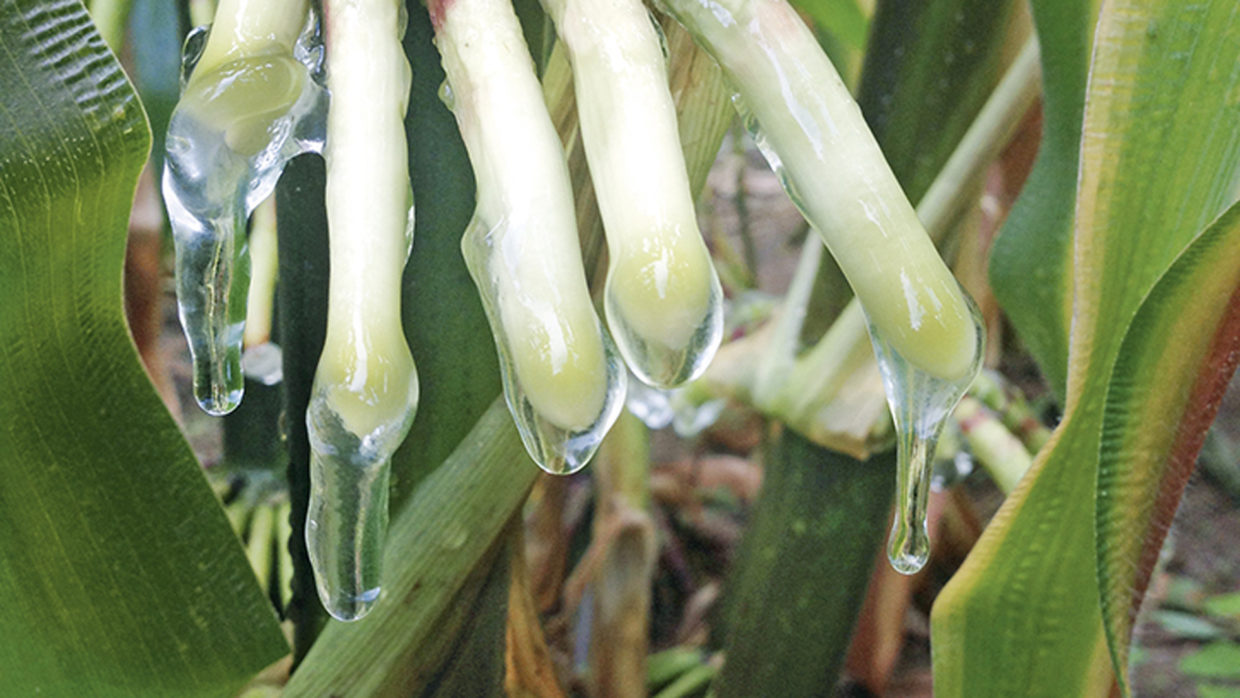 The project, in which the Univer­sity of Cali­fornia, Davis, and Mars Inc. are also involved, has now proved that it is possible to transfer this trait to common vari­eties through hybridi­s­a­tion. “The goal is to signif­i­cantly reduce the use of fertilisers, without affecting yields,” says Dr Ané. “Fertil­i­sa­tion before or during sowing won’t change, but it is the subse­quent appli­ca­tions that we will be able to cut back on.” Several breeding compa­nies are showing interest in this discovery, says the researcher, who expects a hybrid variety within the next 10 years. “Being able to provide 10% of nitrogen require­ments via symbiosis would be a major success. We are hoping to reach 20-30%.”

Impor­tant traits to main­tain are the high number of stem nodes and aerial roots, as well as the amount of gel produced by each aerial root. Another area of research is the selec­tion of the most effec­tive bacteria for devel­oping an inoc­u­lant.

The trop­ical Oaxaca maize variety produces a sugary mucus which is home to nitrogen-absorbing bacteria. Each aerial root secretes 1.5-2ml of this gel after a half-hour period of rain. The contained bacteria stays vital for up to three days without further water supply. The phenom­enon occurs for four months of the year. Previ­ously, only one further example of this mech­a­nism was known about, in the Brazilian giant rhubarb (Gunnera mani­cata).

Making Europe less depen­dent on imports of protein raw mate­rials is a chal­lenge for the future. We meet two producers who are doing their bit to improve Europe’s protein produc­tion.﻿

The coun­try­side is a space to live and to work. And thus often an arena of conflicts of how to use that space. A chal­lenge that needs to be tackled by farmers them­selves.﻿