AttachmentsHarvestersTractorsSpare parts for every age

What started as a hobby has turned into a bustling busi­ness for Dutch John Deere fan Guus van Daele and his son Stanny: The two collect and trade in old spare parts and in so doing ensure that a piece of history is preserved.

At the Van Daeles’ set-up in the Dutch town of Dronten, John Deere is all around. When you drive into the court­yard, the first thing you’ll spot is a green and yellow Amer­ican letterbox. Behind the house is a barn with the logo riveted to the outside wall, and inside you will find a sepa­rate room dedi­cated to green-yellow collector items.

The eye-catcher in the barn, which has been converted into a cosy ‘Bruin Café’, is a John Deere B from 1938. Father and son team, Guus and Stanny van Daele, came across the tractor by chance. “A trader put up a John Deere R for sale,” says Guus. “We had agreed on a price when it turned out that he had already sold the R to another inter­ested party. Then he suddenly came up with this John Deere B at a price we couldn’t refuse. We over­hauled the tractor ourselves. Now it’s a beau­tiful little old tractor.” 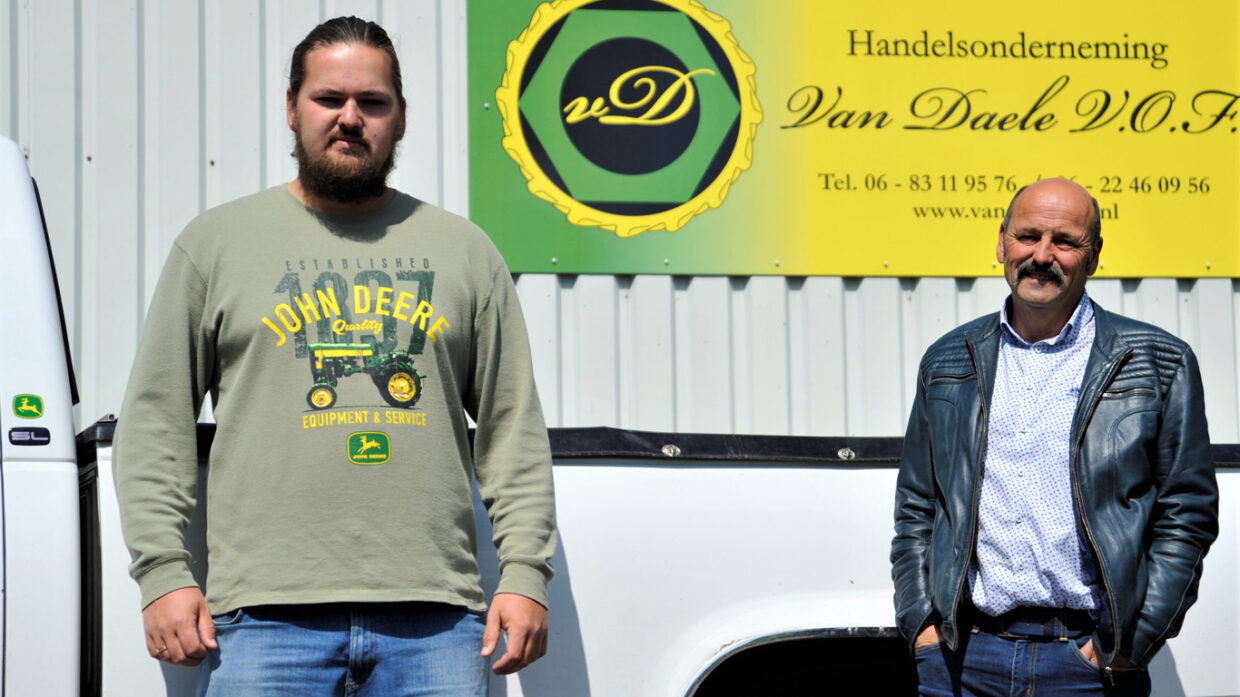 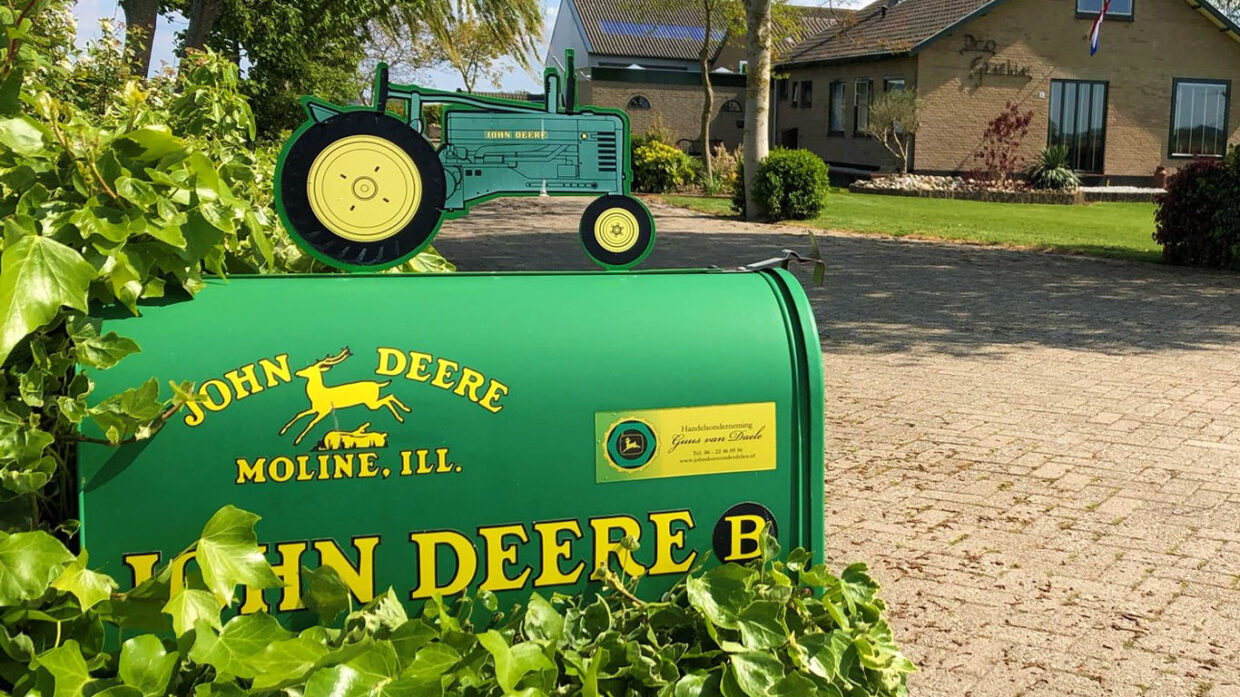 Even the van Daeles’ letterbox has received a fitting John Deere makeover. 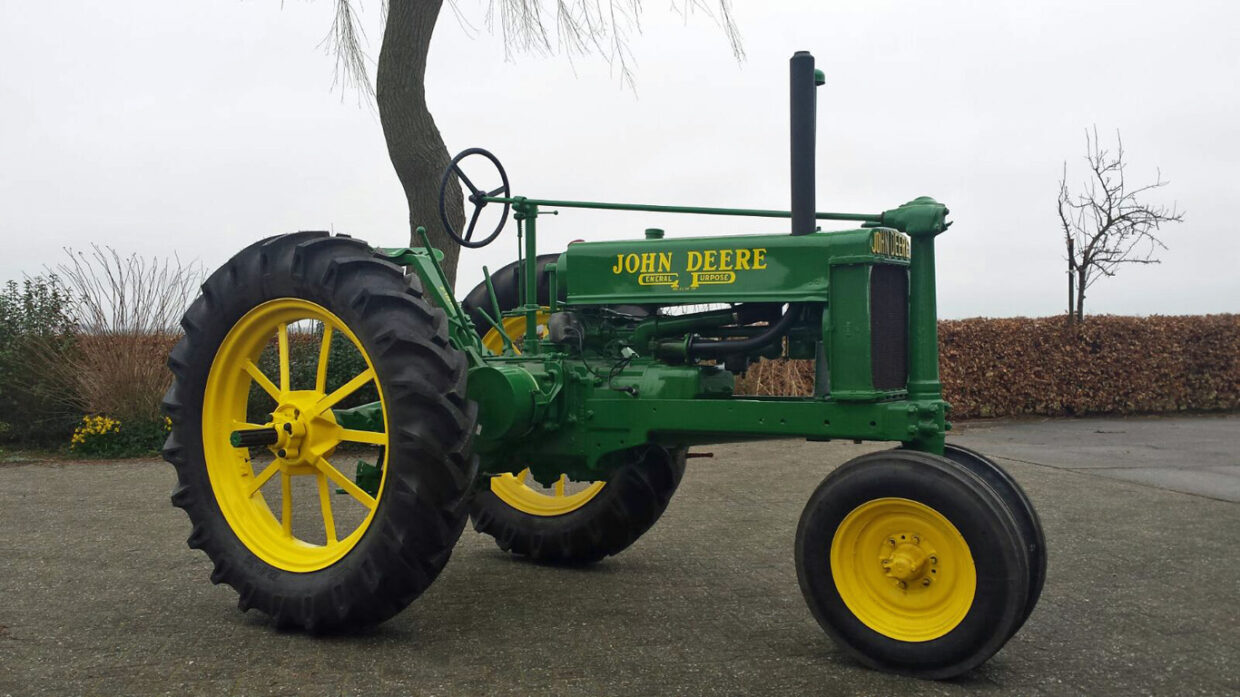 A John Deere B tractor from 1938 is the eye-catcher on the company grounds.

The pair’s passion for John Deere began in 1984, says Guus. “I worked at a dealer which was acquired by John Deere’s former importer Louis Nagel. After that, I switched to another dealer, who then also became a John Deere distrib­utor. Somehow, I just couldn’t escape it, I guess,” he laughs. “If you work there every day, you can’t help but auto­mat­i­cally get excited.”

His son also got swept up in his passion. Stanny sits at the table in a John Deere T-shirt. “It’s a true global brand,” he says. His mother shows off a picture of three-year-old Stanny on a green-yellow toy tractor. “All his nursery school projects were green and yellow,” she recalls. “He grew up with it.”

The start of a new busi­ness venture

The collecting of green and yellow parts reached a whole new level when a John Deere distrib­utor closed his busi­ness in Schild­wolde in 2003. Guus imme­di­ately seized the oppor­tu­nity to get his hands on all of their entire basic stock. “I always wanted to run my own busi­ness – and this was just the right moment. We were able to set up a small busi­ness. I had already noticed at work that there was a constant demand for older parts. But starting a busi­ness without basic stock avail­able would have been diffi­cult. So this was our chance.”

He started selling parts through the Mark­t­plaats online portal, but soon built his own website. After completing his agri­cul­tural studies, his son knew he wanted to continue working in this world, in addi­tion to working on the land during the busy spring and autumn seasons. 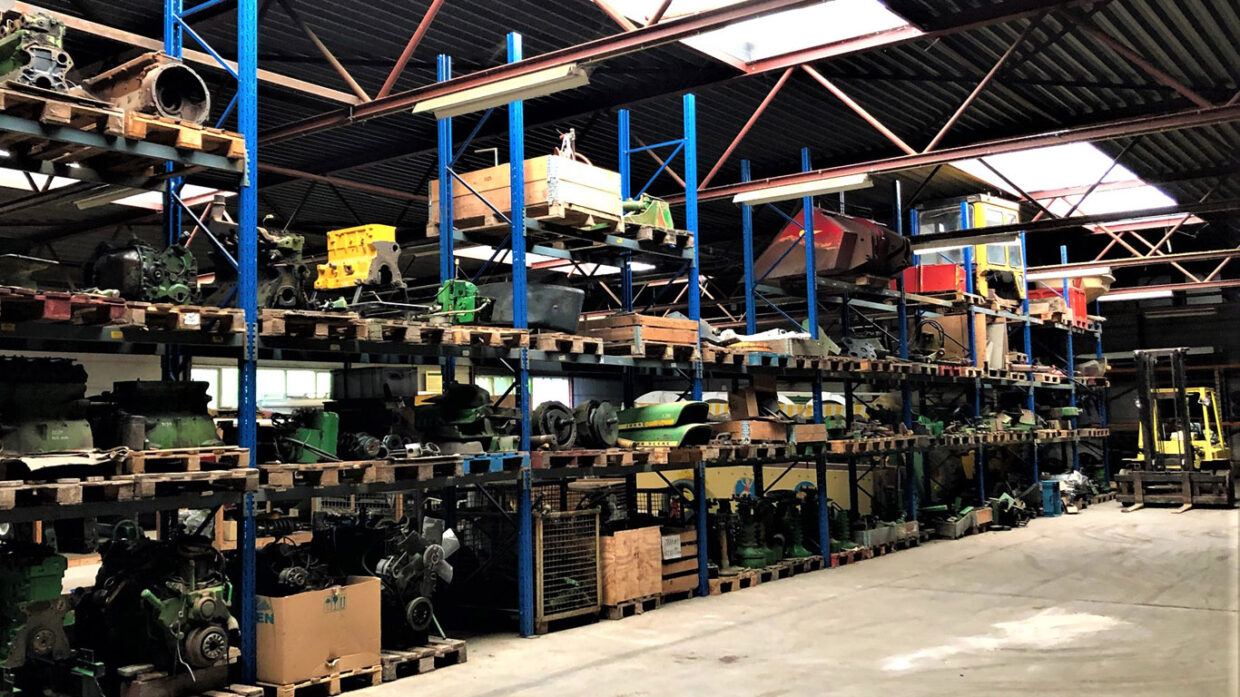 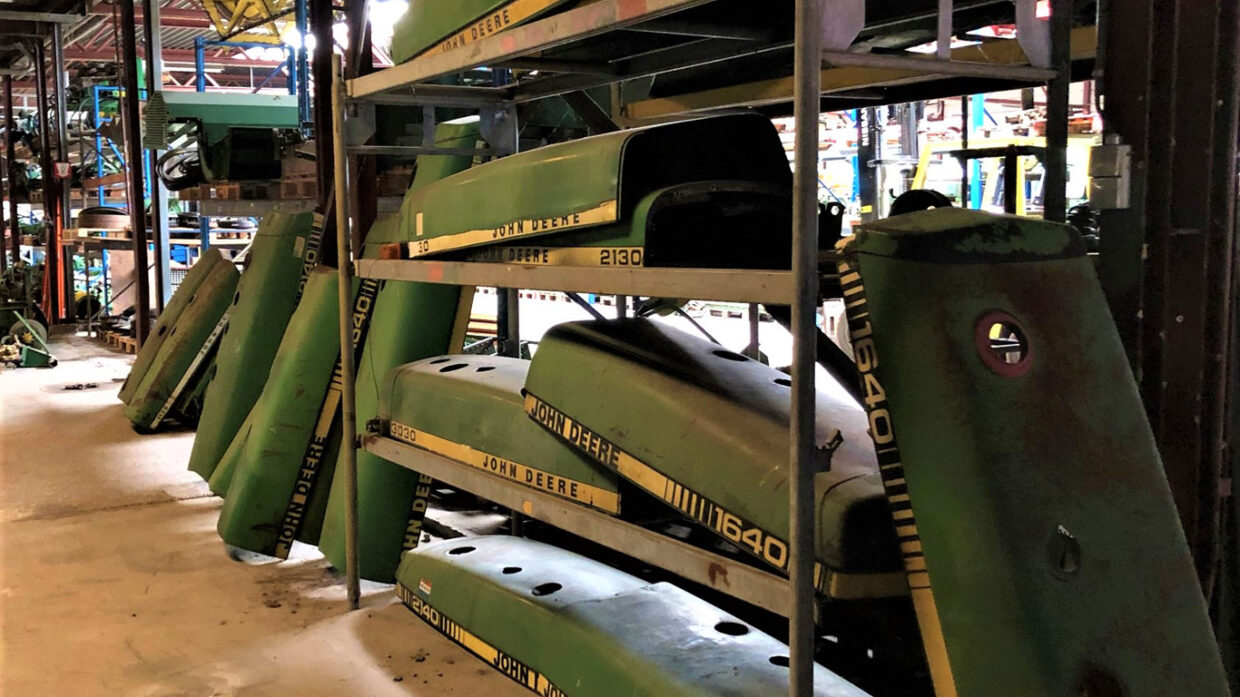 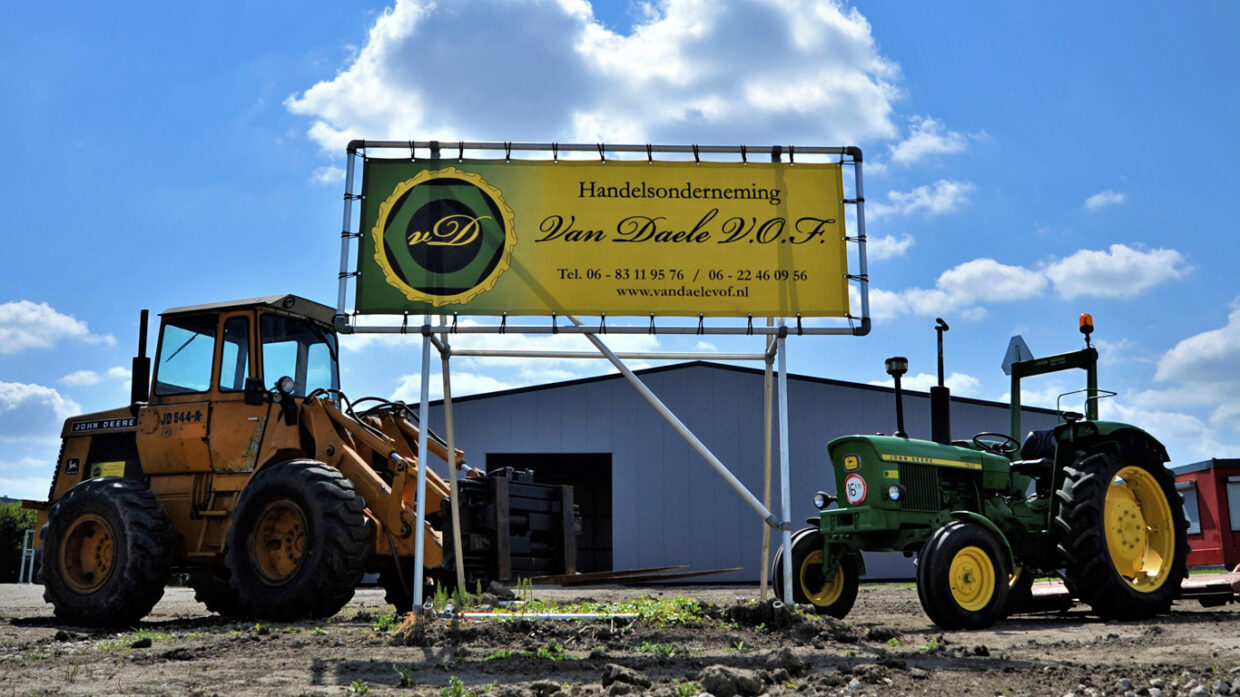 The spare parts trade has devel­oped signif­i­cantly in recent years.

Together, they started small and grad­u­ally became more and more successful. In 2012, they moved their stock from the barn behind the house to a larger shed on a nearby indus­trial estate. And they are already plan­ning their move to another building. “We browse internet sites and auctions at home and abroad in search of unique parts. We are partic­u­larly inter­ested in the older parts,” says Guus. “This is firstly so as not to get in the way of the local dealers. A dealer will only get in touch with us if they get stuck.”

“We don’t want to get in the way of the local dealers. A dealer will only get in touch with us if they get stuck.”

He also points out that there is a good market for older parts abroad. “In other coun­tries, trac­tors are gener­ally used for longer than here, so the demand for parts is higher. And we also don’t have that many hobby drivers here any more either,” he adds. “People now want their tractor to be ready so they can drive off in it imme­di­ately. They no longer feel like tinkering with it them­selves. And in addi­tion, labour in the Nether­lands is expen­sive, so people gener­ally don’t tinker as much here any more. This is different in coun­tries like Poland. As a result, we export a lot to former Eastern Bloc and African coun­tries.”

About 20% of their inven­tory doesn’t spend much time in storage. This includes engines, chassis, lighting equip­ment and hydraulic systems. The remaining 80% has a longer stay. This mainly includes hoods, end drives and models which are less popular in the Nether­lands, like the 5000 series and fruit-growing trac­tors. 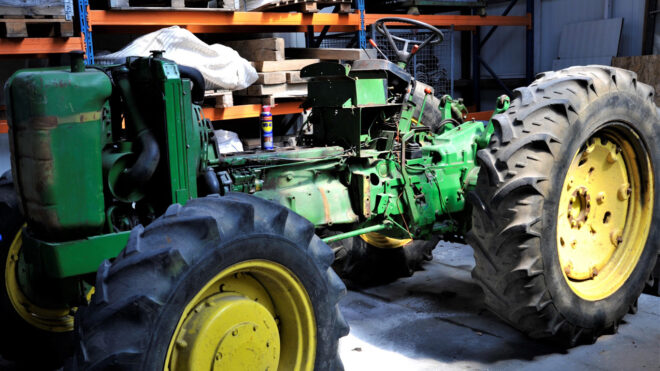 Getting old trac­tors back up and running is one of Guus and Stanny van Daele’s hobbies.

“It’s not just the trade, but also the tinkering that makes this busi­ness so inter­esting,” says Stanny. “The combi­na­tion of the two is what makes it fun. The things we do are quite diverse: Trading, tinkering, exporting, and tracking down parts.” And in some of their research, they come across real gems. For example, they found three trac­tors on an estate in Hilversum which had been standing still for five years, over­grown with moss. “The beauty of it is that we got them back up and running within a day. That’s perhaps the best thing about this job: Getting old John Deere trac­tors working again. Sustain­able recy­cling, so to speak.”

Buying a tractor can be a chal­lenge - keeping sight of oper­a­tional require­ments and budget while being wowed by shiny new kit. But with farms shelling out on average £83,300 on a new tractor (Defra, 2019), how can farmers be sure nothing runs like a Deere?﻿

John Deere has over 100 years of expe­ri­ence with harvesters – and the first combine is already over 90 years old. To date, we have produced over 750,000 combines, including over 120,000 single rotor machines. This is a short story about a long tradi­tion.﻿