Carsten Behr and Ulrich Löhrs’ fami­lies have lived next to one another for gener­a­tions. But being good neigh­bours means more than just that. One of these farm managers uses conven­tional means, the other organic. Last autumn, both farmers entered into a farm part­ner­ship for the FINKA biodi­ver­sity project. Will it succeed?

Ulrich Löhr and Carsten Behr from Denkte in the district of Wolfen­büttel, Germany, are good neigh­bours. Their rela­tion­ship is certainly not a given, since Mr Behr just completed a three-year conver­sion to organic agri­cul­ture, while Mr Löhr oper­ates his farm with conven­tional methods. Both men have known each other for a long time and get along so well that they regis­tered to partic­i­pate in the FINKA project (a scheme to promote insects in agri­cul­ture). They will now be working closely together for five years with support from researchers.

This project in Lower Saxony intends to inves­ti­gate how the diver­sity of bene­fi­cial weeds and insects develops on three groups of fields farmed in different ways: On fields farmed organ­i­cally, on conven­tional fields, and on conven­tional fields where herbi­cides and insec­ti­cides are not used for the dura­tion of the project. The project – which brings together 30 pairs of farm managers – will also research the economic effects of using fewer pesti­cides. Fungi­cides, growth regu­la­tors, and fertilisers can be used as normal. If possible, the same crops are to be grown on all three fields every year to make it easier to compare the data.

Farmers have their own interest in making sure that nature is doing well.

The goal is to increase biodi­ver­sity in agri­cul­ture. Farming plays an impor­tant role in protecting insects since it takes up large areas of land. The results will be used to derive prac­tical recom­men­da­tions for success­fully discon­tin­uing herbi­cide and insec­ti­cide use. “Farmers have their own interest in making sure that nature is doing well,” explains Dr Svenja Bänsch, who provides research guid­ance for the project. “They work with nature. We wanted to get an idea of how to promote biodi­ver­sity in conven­tional agri­cul­ture.”

The first FINKA season began in autumn 2020 with winter crops for all farm pairs. Messrs Behr and Löhr grew winter wheat. The conven­tional farmer did not use herbi­cides and insec­ti­cides on two hectares.

This meant he had to rely on mechan­ical means to control weeds, and this is where co-oper­a­tion with his neigh­bouring farm comes into play. True to the motto “together, you are never alone”, these two farms will support, advise, and help one another with equip­ment. Mr Löhr was lucky with his neigh­bour. Mr Behr simply harrowed his trial field since he was already out there working. “I think Carsten was on my field more often than I was,” Mr Löhr recalls. “At some point, he came over and said ‘we have to harrow now’.” Mr Behr often goes over his fields to find the best time to take action.

In the first year of the project, it was easy to inte­grate the removal of pesti­cides and the resulting addi­tional field­work into the overall work­flow. “I didn’t have much to do with that,” Mr Löhr jokes. Thanks to his helpful neigh­bour, he had no addi­tional costs at all in this year. If every­thing goes smoothly, it should stay that way. “There are only two hectares that directly border my fields. That keeps addi­tional costs in check,” Mr Behr says. 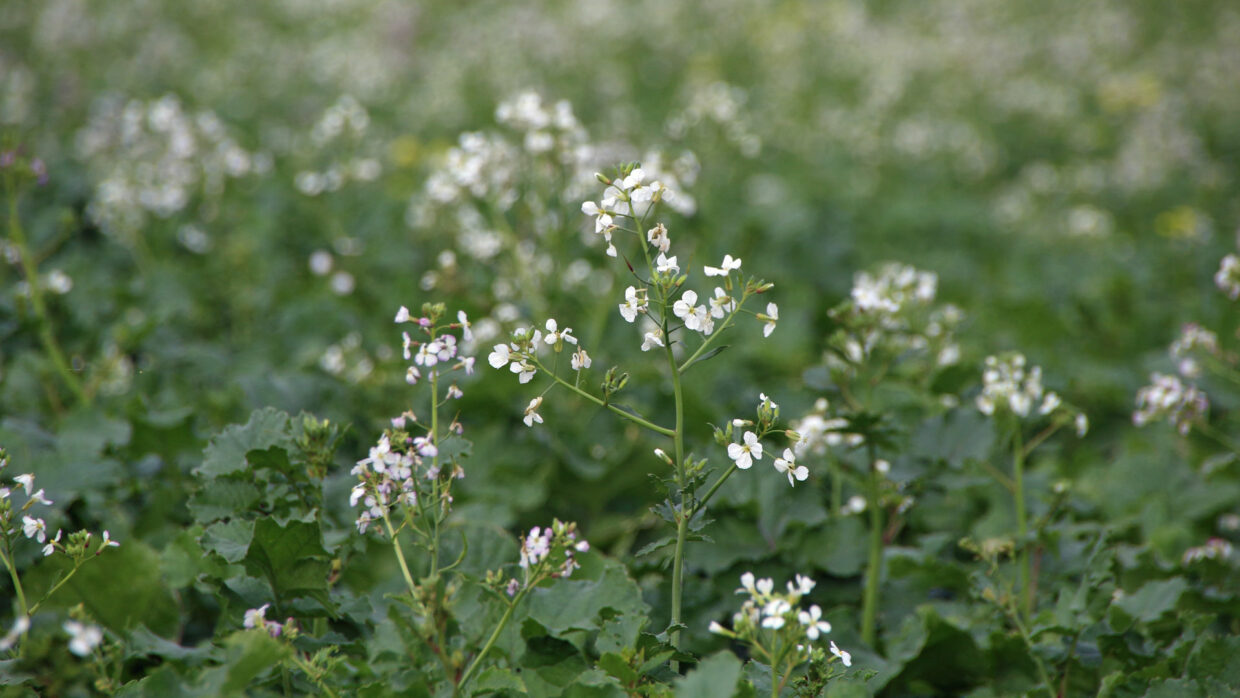 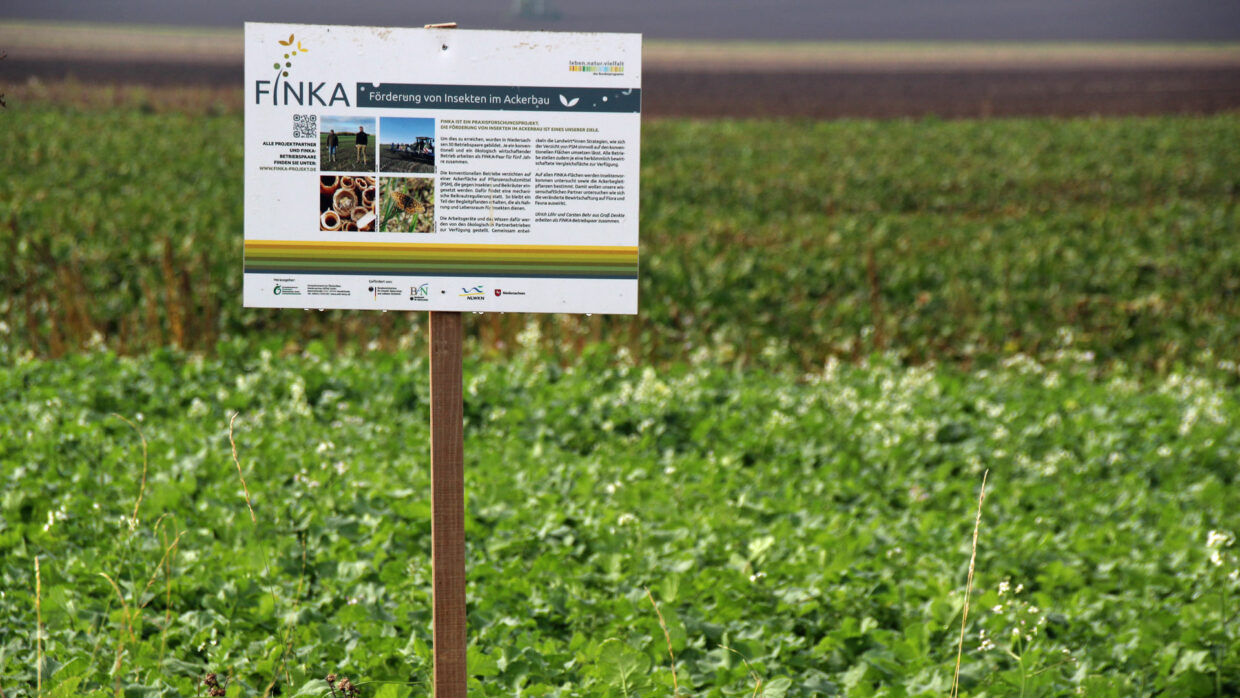 Over time, the FINKA project will increase biodi­ver­sity in agri­cul­ture. 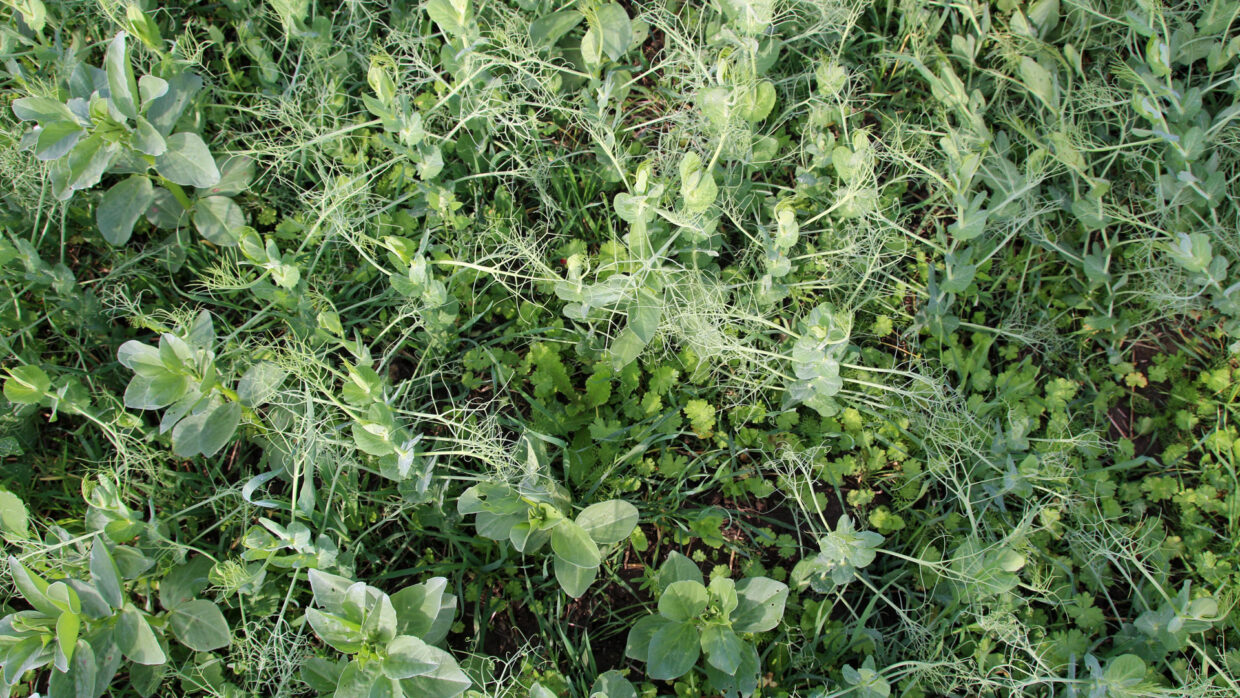 A legume catch crop after wheat will hold nitrogen in place on the organic farm.

Posi­tive results after the first year

Wheat is a rela­tively uncom­pli­cated crop when it comes to insects and weeds. Mr Löhr was also a little lucky since there were few insects about in the region last year. So not using insec­ti­cides did not have much of an effect. In addi­tion, weeds were kept in check, with two passes of harrowing proving enough to compen­sate for not using herbi­cides. 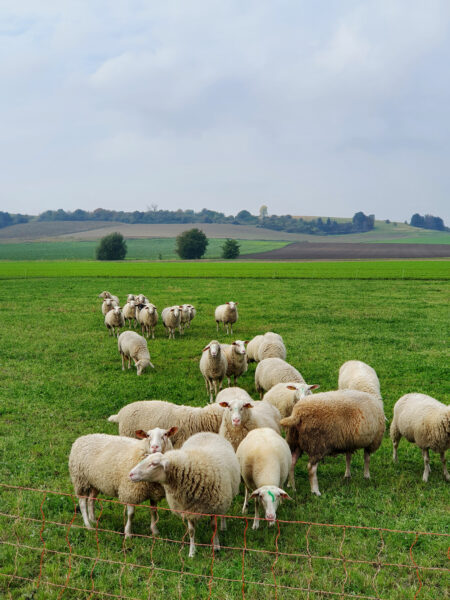 The first year was stress-free. Mr Löhr even suspects that the FINKA field had slightly higher yields than the conven­tional fields. And it cost less to grow because he was able to save on herbi­cides. He also did not have to sacri­fice in terms of protein content or weed seed stocking. “There was hardly any differ­ence,” Mr Löhr explains. Whether the data confirms his feel­ings remains to be seen until the results are in.

It helps that Mr Löhr’s field was in the right condi­tion when the project kicked off, without any chem­ical resis­tance and very few weeds. In addi­tion, the wheat stand was extremely thick thanks to the excel­lent black soil. “At the begin­ning, every­thing is always sunshine and rain­bows,” Mr Behr reports from his expe­ri­ence. “The weed stand builds up: The third year without herbi­cide is a real chal­lenge.”

In the spring after the start of the project, researchers set up nesting places on the fields, followed by yellow pan traps and ground traps to count the insects.

Scien­tific inves­ti­ga­tions are far from being finished. Never­the­less, Dr Bänsch has already made a signif­i­cant obser­va­tion on the trial fields: “As soon as the accom­pa­nying flora grow in number, you see more insects on the blos­soms.” Plants are a resource for the insects, and the more varied the buffet, the more likely it is that each insect will find some­thing to eat. To what degree this obser­va­tion reflects actual insect variety on the field cannot yet be said. Nocturnal species and those that live on the ground or in stems are not imme­di­ately visible when walking the field.

Learning from one another 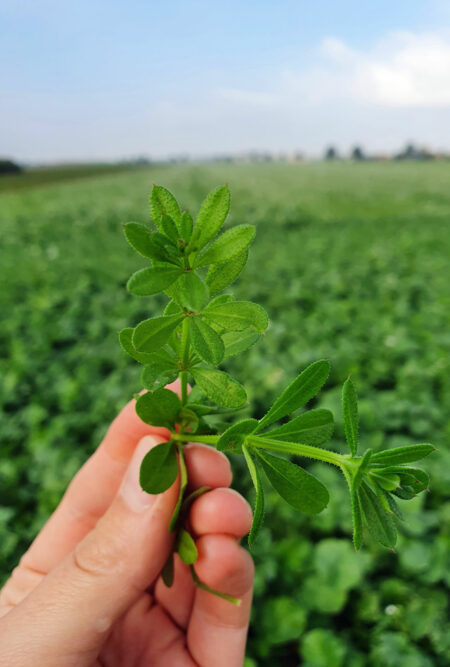 Because the bene­fi­cial weeds have been mapped out, Carsten Behr learned that two types of cleavers are growing on his farm.

Mr Löhr is not concerned that the full extent of stop­ping herbi­cide use will only become apparent in a few years: “The two-hectare field is very manage­able. The risk is clear to me, but this won’t kill me.” Further­more, project partic­i­pants receive a small reim­burse­ment and are assisted by an agri­cul­tural adviser.

Mr Löhr learned about the FINKA project early because he is an active volun­teer with the Land­volk Landes­bauern­ver­band [Rural Regional Farmers’ Asso­ci­a­tion] and has been chairman of the Netzwerk Ackerbau [Agri­cul­ture Network] for some time. Both organ­i­sa­tions are partic­i­pating in the project. Though Mr Löhr is convinced of the bene­fits of conven­tional agri­cul­ture, he was driven by curiosity: How can one get a handle on weeds and insects without using herbi­cide and insec­ti­cide?

“I named the project ‘Learning from Organic Farmers’ for myself. Nobody knows what the future holds. But pesti­cide approvals will become more and more rare. As such, we will inevitably have to resort to more tradi­tional measures”, he explains. He is still unwilling to switch to organic agri­cul­ture, though. “But I wouldn’t have started with FINKA if I had a funda­men­tally nega­tive opinion of organic.”

The research excites his colleague Mr Behr. For him, partic­i­pa­tion in the project has already been worth it. He has learned a great deal; for example, which bene­fi­cial weeds grow on his field. “It is always said that organic agri­cul­ture is more biodi­verse. I think it is impor­tant that the effects of discon­tin­uing herbi­cide use are supported by solid figures. It is also very inter­esting that this trial is planned for several years,” Mr Behr says, describing his motive for partic­i­pating in the project.

More farm oper­a­tors are excited for next year. They want to grow sugar beet. Without herbi­cide and insec­ti­cide, that means a great deal of work to keep this root crop free of weeds. But Messrs Behr and Löhr are certain that they will be able to master this chal­lenge together. “I would not do the FINKA project with just anyone,” Mr Löhr makes clear. “Everyone has neigh­bours. You have to look for friends. But, in our case, things went well.”

Waste­water minus water and cont­a­m­i­nants equals a very potent, and more impor­tantly, recy­cled, fertiliser. The Swedish company EkoBalans aims to capi­talise on this as it develops a more sustain­able NPK fertiliser.﻿