The grain that returned to the sea to feed the world

A chef and a team of scien­tists are the first to have domes­ti­cated the plant Zostera marina with the inten­tion of using it for food prod­ucts because of its high nutri­tional bene­fits. The growth of this plant is asso­ci­ated with great subaqueous biodi­ver­sity and a decrease in ocean acid­i­fi­ca­tion.

Juan Martín tells of the time when the native Seri or Comcaac people named the month of April “moon, when the seeds of marine wheat ripen.” The biol­o­gist goes on to tell us that, at that time, “released from the seabed, the plant was carried by the waves which arrived at the coast of the narrow Infiernillo Channel, between the Gulf of Cali­fornia and Tiburón Island.” The sandmen, who lived near the Cortés coast and in the eastern foothills of the Sonora desert, dried out the plants and shook them to harvest the grain.

Memoirs written by the explorer Álvar Núñez Cabeza de Vaca in the 16th century confirm that the flour acquired from the fruit of this aquatic plant played an impor­tant role in the tradi­tional diet of the indige­nous tribe. It was used for making cakes and hot drinks (atoles). Proof of Zostera marina’s nutri­tional value for the indige­nous Seri people could be found in a Science maga­zine article (July 27, 1973), a copy of which landed in Ángel León’s hands many years later, giving him the idea to make the most of these health bene­fits in his cooking. 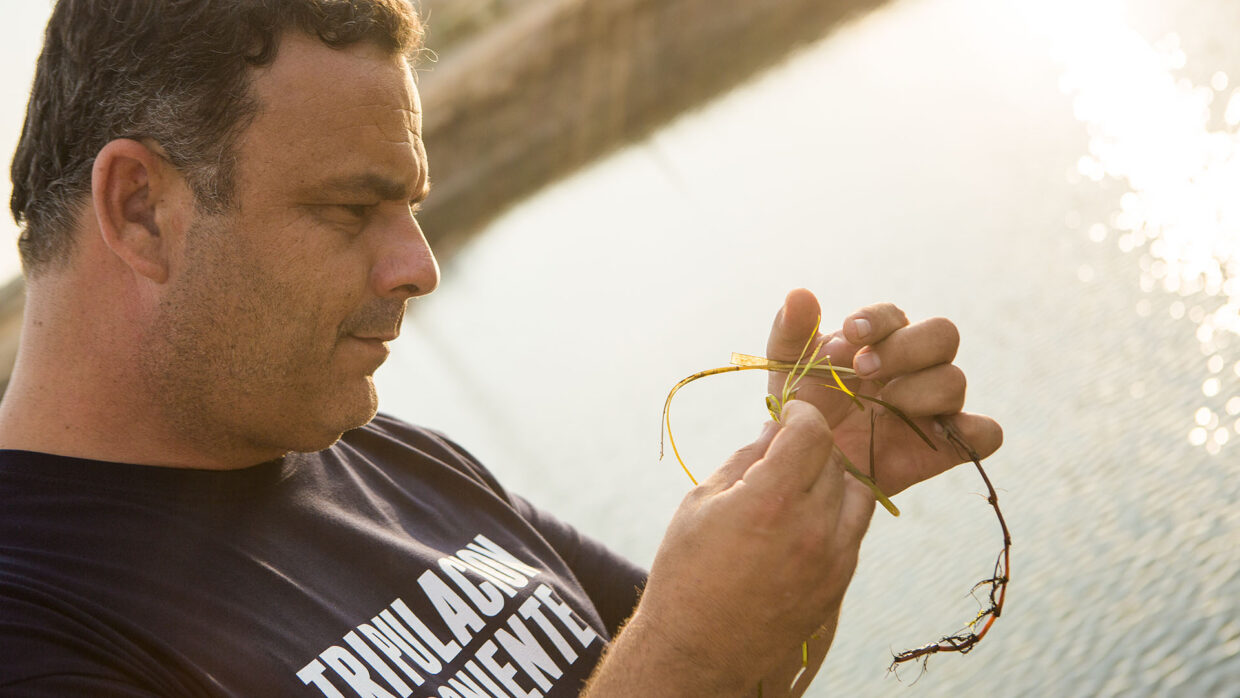 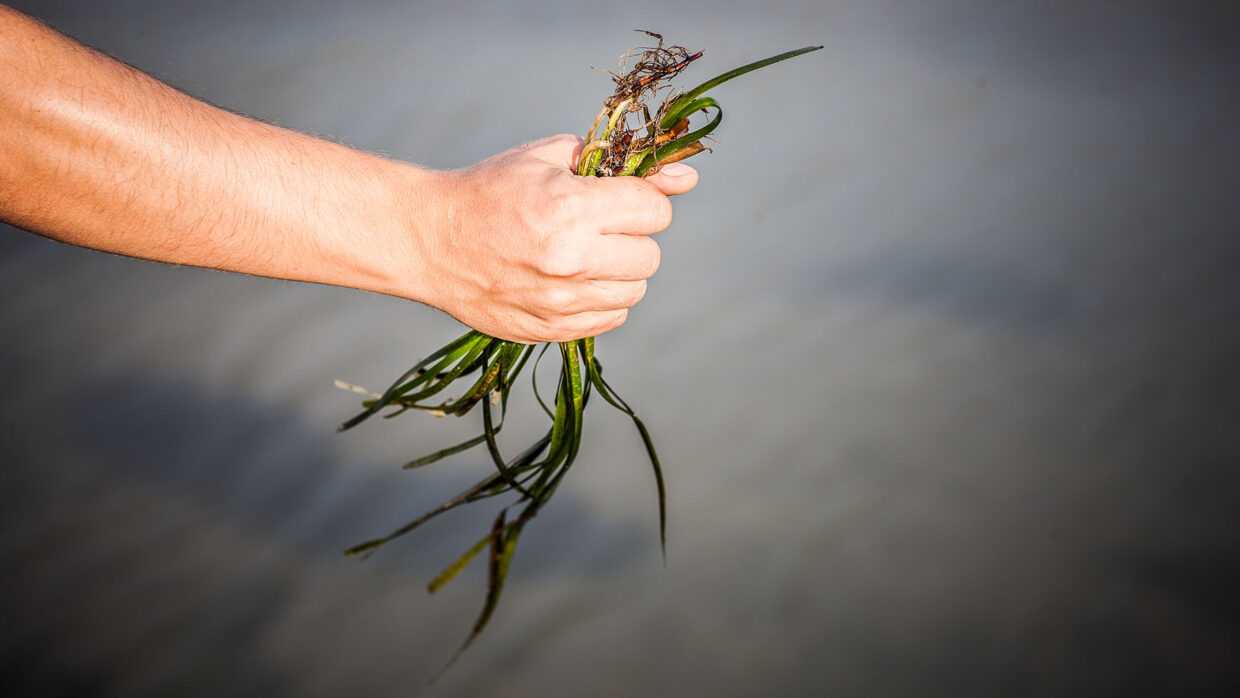 Up to 5 tillers per plant are grown. 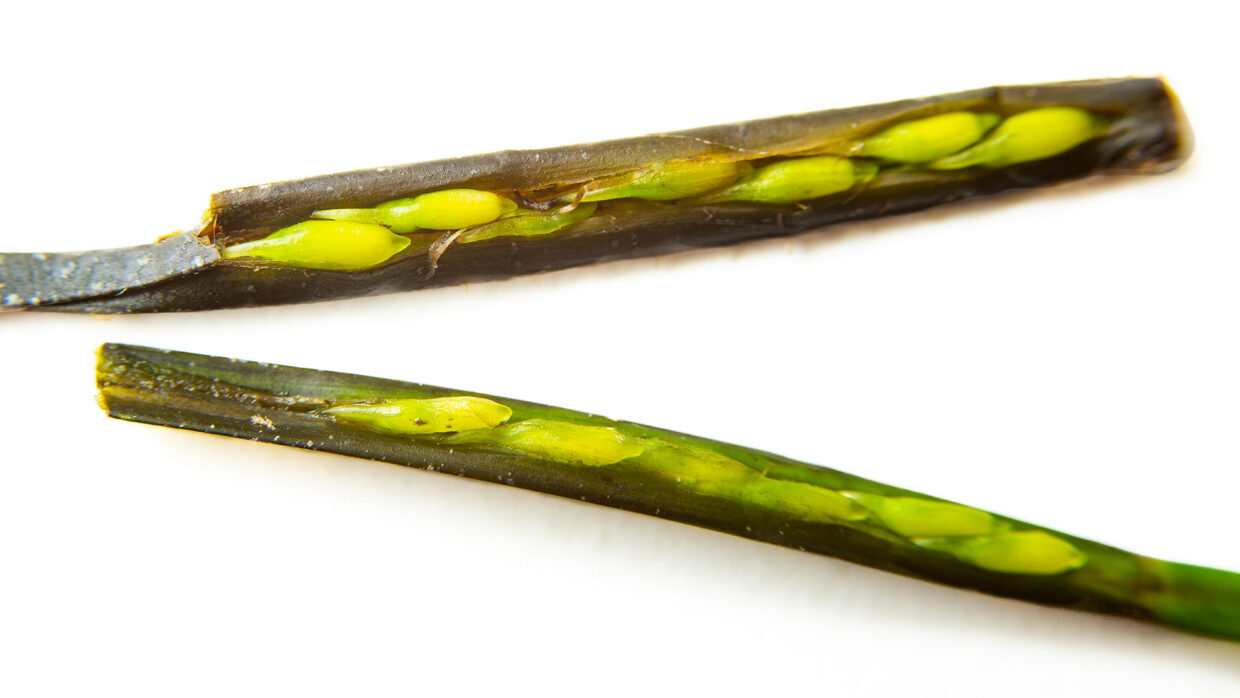 Each plant can produce up to 20 seed pods. 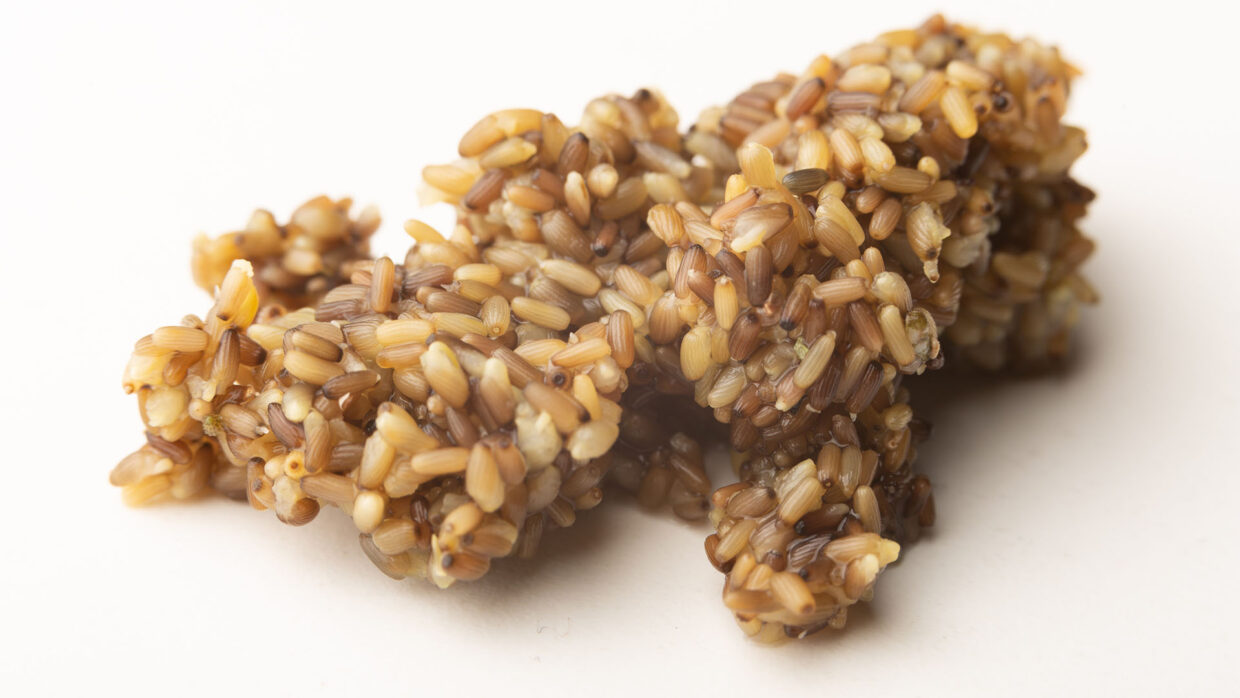 The grain that grows under the sea

Zostera wasn’t completely unfa­miliar to Mr Martin. It became known to him when he was working on restoring some marsh­lands four years ago. “It can be found along most coasts in the northern hemi­sphere, apart from at the North Pole,” says Mr León, who is known as the “chef of the ocean” and runs Aponiente, a restau­rant with three Michelin stars that specialises in seafood. 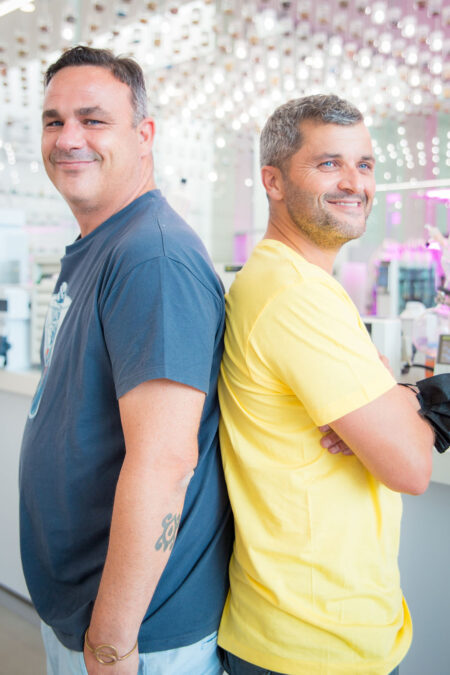 This is not a type of alga, but a seed-bearing plant, or phanerogam, of which 67 different types exist in the world. It is a kind of grass which has become accus­tomed to growing submerged in water, from which the plants evolved to repop­u­late the land. The grass gets its nutri­ents from the salt­water to produce seeds, which Mr León and his team have studied to check are safe to include in a human diet, too.

“We can confirm that the nutri­tional prop­er­ties of Zostera marina are supe­rior to those of rice and wheat,” confirms Mr León. He arrived at this conclu­sion after running exten­sive exper­i­ments over the past few years with his team, of which Mr Martín is a member. “We have to take into account the following factor: Only 2.5% of the water on Planet Earth is fresh­water, and this is the first time a plant with so many bene­fits has been harvested from salt­water,” the chef adds.

“We’ve copied the physic­o­chem­ical condi­tions in estu­aries, seas and oceans, from which the plant comes, so that we can recreate them in shore­line areas,” explains Mr Martin. “This is the first time that anyone has closed the entire life cycle of the Zostera plant, which grows within the controlled envi­ron­ment of the estuary.” The Puerto Real estuary is a deep body of seawater, harnessed by human hands to extract its salt and later to breed fish in the marshes of the Cádiz coast.

“We have already grown Zostera in three pilot exper­i­ments, where we recre­ated different condi­tions; changing the depth, current, and substrate,” says Mr León, who worked on the projects as a seagrass farmer. “We reused aban­doned spaces across the Cádiz province where we could bring in sea water through gates, thanks to the rising and lowering tides.” 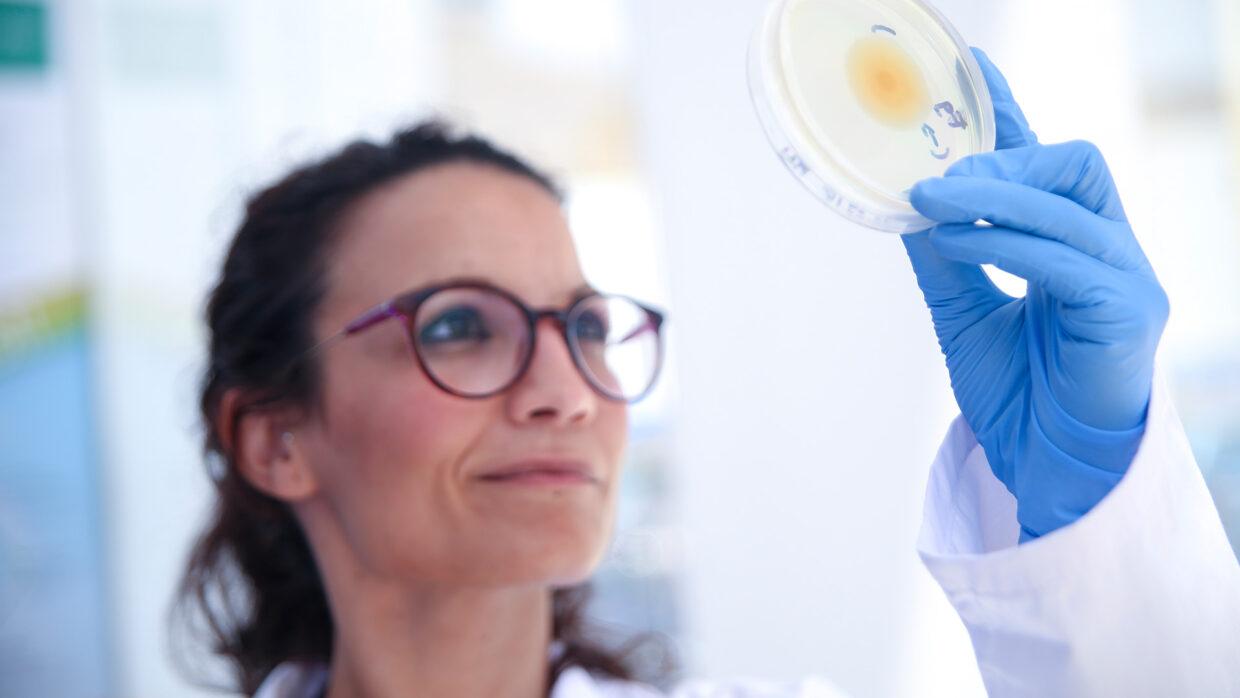 Researcher at the MAAVi Inno­va­tion Center, respon­sible for scaling the Zostera crop. 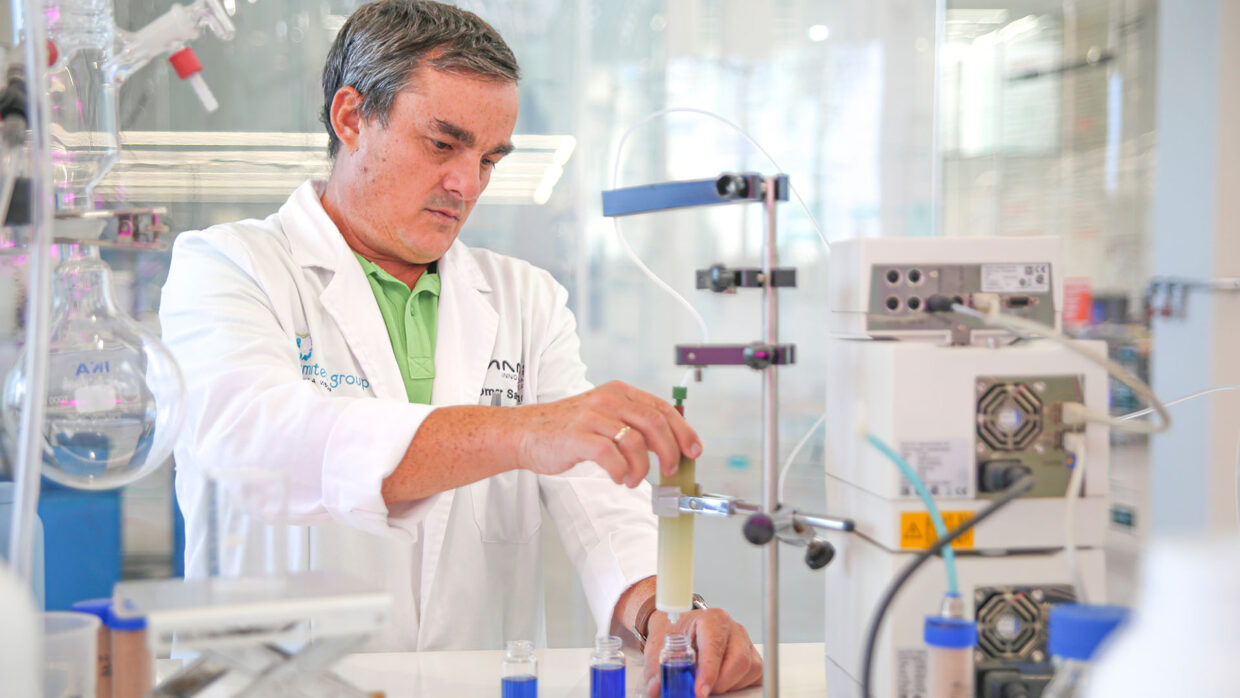 The plant is peren­nial, and its ecolog­ical processes occur by carbon fixa­tion. It produces oxygen which dissolves into the water and settles at the bottom of the ocean. It reduces turbidity (water cloudi­ness) by holding sedi­ments and solids in suspen­sion. When farmed, the plant is submerged in a mix of waters which imitates the effect of the tides, and just the pres­ence of Zostera creates a place of refuge for asso­ci­ated fauna, which favour the envi­ron­mental condi­tions below the water.

Throughout the plant’s entire root system grow micro-organ­isms whose meta­bolic activity takes place in the silt. And the above-ground part of the plant is home to species that are very impor­tant to the ecosystem, like needle­fish and seahorses, as well as several other species of fish, crus­taceans and other aquatic organ­isms. That’s why no fertilisers, plant protec­tion prod­ucts or addi­tional nutri­ents are used.

As with all areas where plants can be found in a high concen­tra­tion, Zostera attracts preda­tors that consume its grain before it is fully grown. To control these preda­tors’ carniv­o­rous fish have been inte­grated into the system. When the water temper­a­ture increases suddenly, or the heat from the summer sun is too much, the plant gets covered in epiphytes or macroalgae – to avoid this, they are combed out every day. 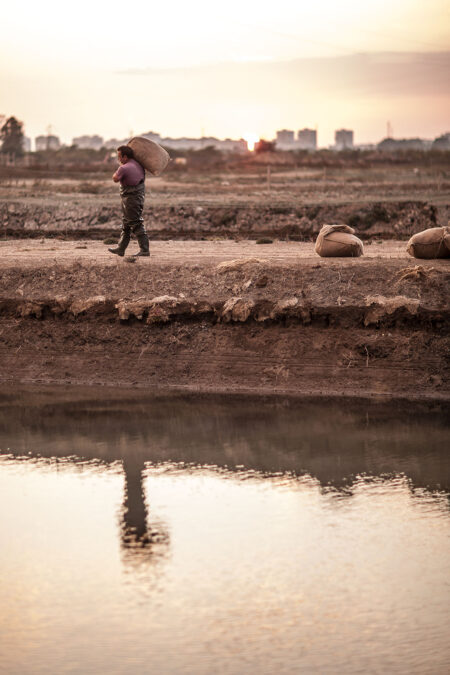 Salt and fish were the fruits of the “esteros” in Cádiz. Some popu­la­tions have culti­vating Zostera marina.

The Zostera marina farmer harvests the seed by hand. The plant’s exis­tence is at risk, and, in its first pilot crops, repro­duc­tion of seeds was preferred. “There isn’t enough stock, and we are depen­dent on our own seeds,” says Mr Martin, the biol­o­gist. “We have focused on repli­cating the plant mate­rial by selecting different geno­types we found inter­esting with regard to size, germi­na­tion stage, and nutri­tional prop­er­ties.”

Mr León high­lights the upcoming chal­lenges: Main­taining the natural distri­b­u­tion of the plant; keeping the crops within reach of any aqua culturist, salt trader, marine or seafood farmer; and increasing the scale of exten­sive produc­tion.

“This last chal­lenge is what we are working on with Aponiente: Turning the idea of harvesting Zostera into an indus­trial reality, which is part of the project we have on the go with Ángel,” says Félix García, CEO of Kimitec and pres­i­dent of the MAAVi Inno­va­tion Centre.

This is the largest centre of bio-tech­no­log­ical inves­ti­ga­tion into natural solu­tions in Europe. The two have already begun their collab­o­ra­tion, inves­ti­gating vari­eties of the aquatic plant in vitro. Both part­ners have set up a plat­form to extract substances and mole­cules from the sea, and to use them for food supply as alter­na­tives to those grown inland.

WHY IS THIS A SUPERFOOD?

Its average carbo­hy­drate content is around 82% – more than 50% of which is starch. It has 13% protein (FAO score 71), less than 2% fat, and the rest consists of fibres and a high mineral content. These plants also hold high concen­tra­tions of B vita­mins (B1, B2 and B3 at least) and essen­tial fatty acids like Omega 3 and 6.

There are few places in the British Isles as remote as the Outer Hebrides; 24 miles off the west coast of Scot­land with little between them and Newfound­land, these islands are truly unique. Breath­tak­ingly beau­tiful but with noto­ri­ously volatile weather, farming here is chal­lenging – yet these resilient people are not only surviving but thriving.﻿