Crofting in the Outer Hebrides

There are few places in the British Isles as remote as the Outer Hebrides; 24 miles off the west coast of Scot­land with little between them and Newfound­land, these islands are truly unique. Breath­tak­ingly beau­tiful but with noto­ri­ously volatile weather, farming here is chal­lenging – yet these resilient people are not only surviving but thriving.

It is said that the further away you travel from power, the more self-reliant you become; and that is certainly true of the island of Lewis and Harris. Living here, nearly 700 miles distant from London, this close-knit commu­nity works together for the benefit of all. Rooted in agri­cul­ture and rural skills, they are marrying the old with the new, adopting modern tech­niques to keep their history alive and kicking.

“Old houses are being brought back to life on the crofts and that’s really impor­tant,” explains Iain Riddell – a crofter himself and head of busi­ness consulting at SAC; part of the Scot­tish Rural Agri­cul­tural College. “People want to come back and croft here like their fami­lies did.”

So what exactly is crofting? An ancient form of land tenure in the High­lands and Islands of Scot­land, crofts are small agri­cul­tural units located on large estates with the tenancy typi­cally handed down through family gener­a­tions. There are around 17,000 crofts in Scot­land, at an average size of 5ha. Most crofts are part of a town­ship and tenants usually have access to large areas of common grazing, on which flocks and herds are ‘hefted’ – ie, when live­stock know the grazing area without being fenced.

Over the years, tenants have aban­doned their crofts and moved away, but now EU-funded crofting schemes are providing finan­cial support to help crofts become more finan­cially viable. And without such support both the farming and commu­ni­ties would be at threat, warns Mr Riddell. “Without crofting it would create a desert – it main­tains the commu­nity.” 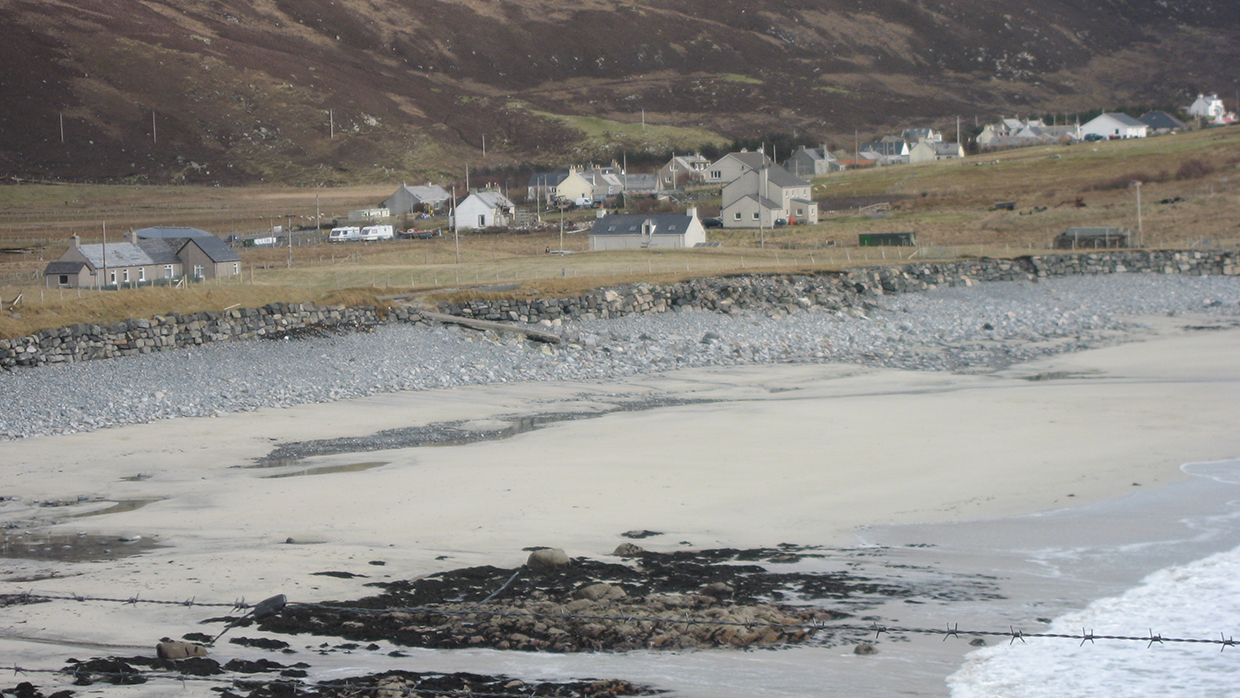 On the island of Lewis and Harris the old tradi­tion of crofting is prac­ticed. 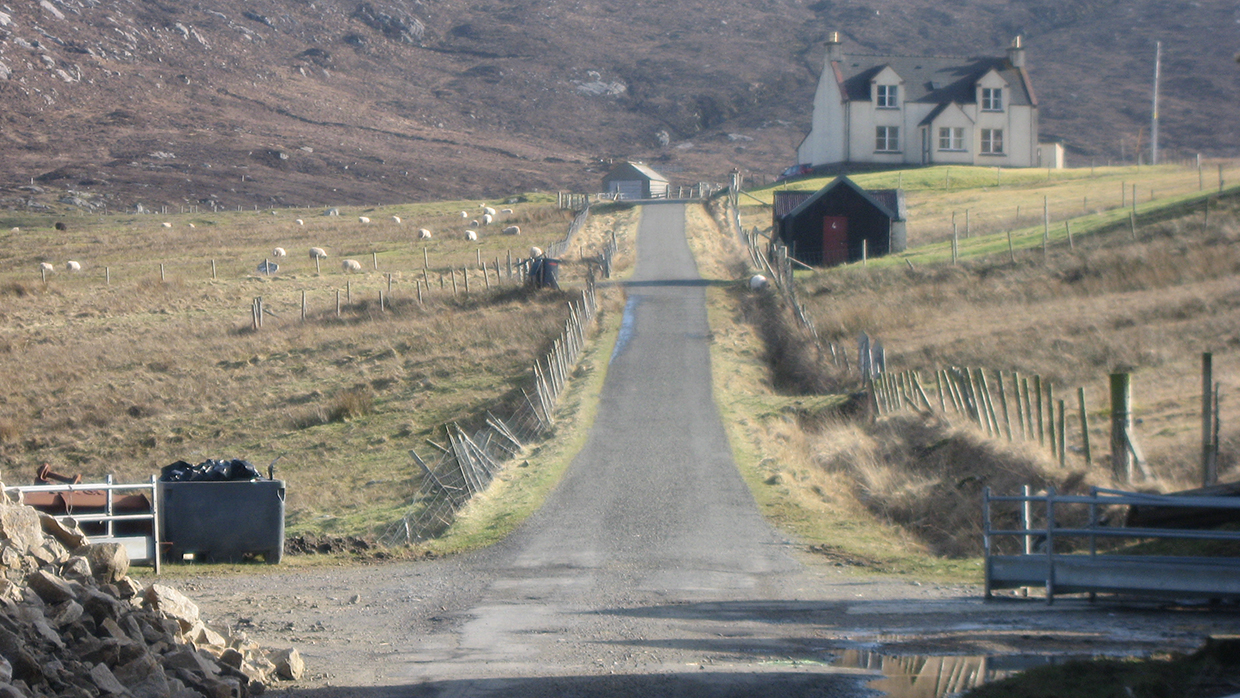 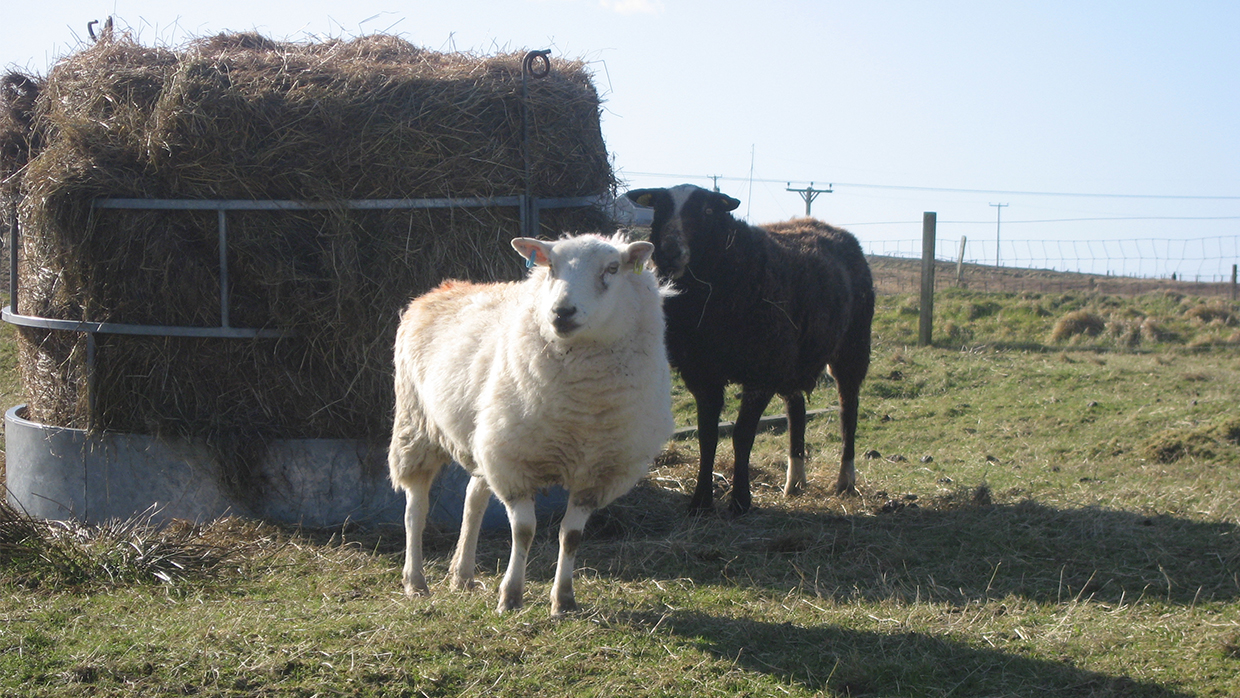 There are sheep on the island... 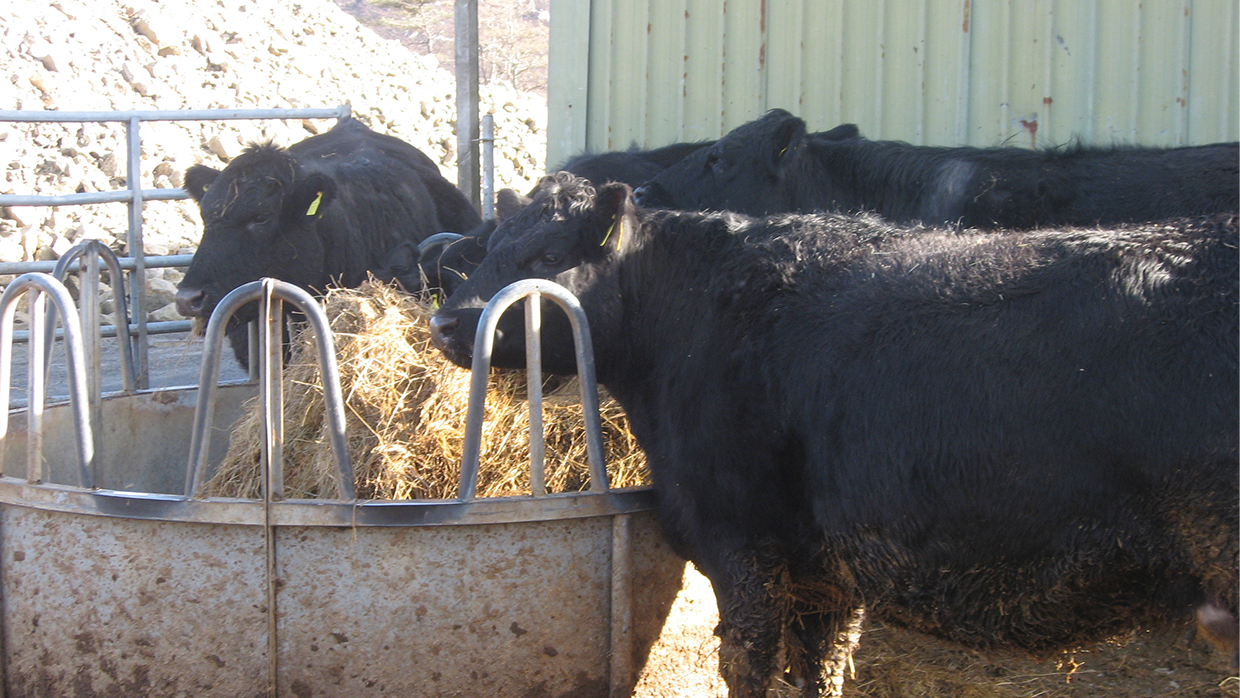 Ness, on the northern island of Lewis, is a good example of how strong the commu­nity links are. Here, the local resi­dents clubbed together to buy the 22,260ha Galson Estate and put it into a commu­nity-owned char­i­table Trust to support sustain­able regen­er­a­tion of the area. More than 400 local busi­nesses operate on the estate, including a commu­nity school, sports centre, social club, shop, museum, and three wind turbines which provide power to the several thou­sand local houses. 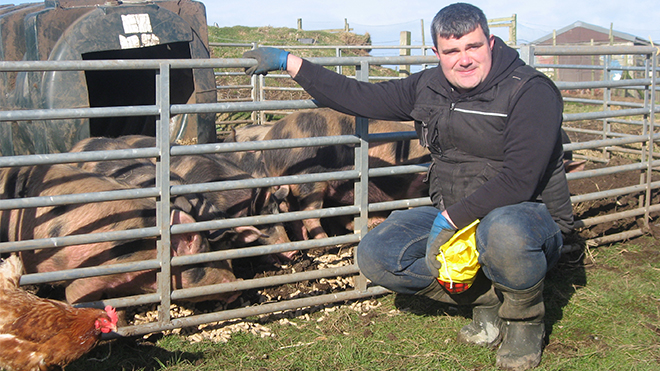 At 36 years of age, Donald Macsween has 100 sheep, three High­land cows with calves, four sows and one boar plus final fattening animals and 500 to 600 laying hens.

“We’re very self-suffi­cient here – I think it’s in the mindset of people to work together,” explains Donald Macsween, who runs three crofts aver­aging 2.8ha each and has access to 22,672ha of common grazing. His family croft is 25m wide and 0.9 miles long, encom­passing a mix of machair land (a rare, fertile, low lying grassy plain) and heavier peat – the idea being that each croft gets a similar tongue of land.

Although there are 23 crofts in the area, only four or five are active – and this has enabled Mr Macsween to grow his enter­prises across a larger area. He is one of the few full-time crofters on the island – most have a full-time job as well as managing their land. At the age of 36, Mr Macsween now has 100 sheep, three High­land cows and followers, four sows and a boar plus finishers, and 500-600 laying hens.

Everyone helps out to gather and handle live­stock when needed – for example at shearing time. “My 75-year old neigh­bour wouldn’t have sheep if I didn’t do what I do… we all have to work together.”

In a bid to make the unit prof­itable, Mr Macsween sells as much of his produce direct as possible: Eggs go to local inde­pen­dent shops, restau­rants and hotels, Hebridean and Shet­land sheep are slaugh­tered locally and sold through butchers or as meat boxes, and even the wool is now being spun by local busi­nesses into premium value Harris Tweed.

Mr Macsween is using the crofting grants to improve the viability of his land: He has invested in a poly­crub – a robust green­house which has been adapted for live­stock use. Designed and made in Shet­land, poly­crubs are based on disused plastic tubing from fish farms. The U-shaped tubes are concreted into the ground and the frame then clad with poly­car­bonate sheets, making for a poly­tunnel that’s robust enough to cope with this extreme climate and winds of up to 120mph.

The 12m ridge allows plenty of head­room, while opening windows provide venti­la­tion on warmer days. The aim is to lamb indoors, and Mr Macsween plans to buy another two poly­crubs in which to store machinery and keep pigs. Ulti­mately, he wants to erect a larger live­stock shed, but needs to save the money first – at that point he will then re-clad the poly­crubs in trans­parent sheets and use them as green­houses.

Further south, on the wild yet beau­tiful coast next to little Stornoway airport, that’s exactly what Karen Macleod is using her poly­crub for. At the family’s aptly named ‘Allwynds’ croft she grows all manner of fruit and vegeta­bles, including exotic fruits like olives, lemons and grapes.

“We’re completely off-grid, but I can provide my family with at least six months’ of organic fruit and vegeta­bles,” she says. “There are no food miles, and it’s better for the envi­ron­ment. People are wanting more local food, and to know where it comes from.”

I can provide my family with at least six months’ of organic fruit and vegeta­bles.

Mrs Macleod has adopted a no-dig system to preserve the natural soil struc­ture and biota, makes her own compost, and covers the soil with local seaweed mulch to keep weeds down and the soil moist. She co-grows herbs and flowers for pest control – with every­thing grown from seed – and makes her own fermented and preserved food and drink from any surplus. “I don’t think we’ll ever make lots of money selling veg, but it is enjoy­able and shows that a croft is not just for sheep.” 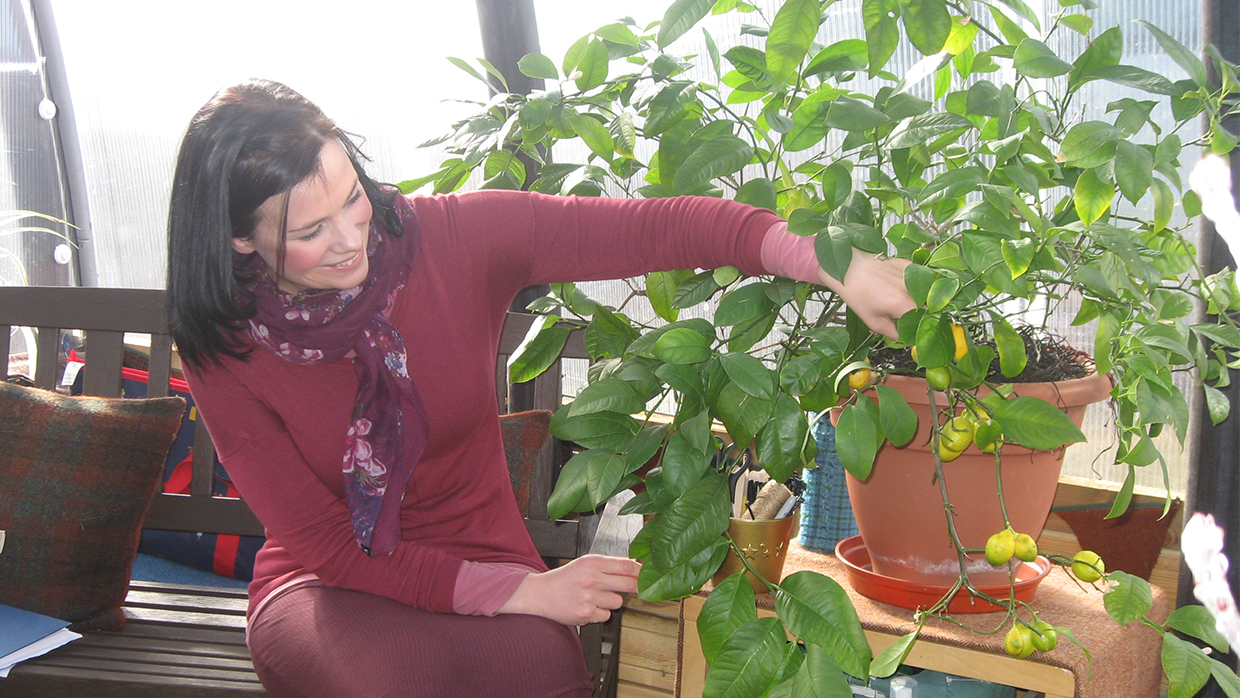 Karen Macleod uses her Poly­crub to grow a variety of different fruits and vegeta­bles ... 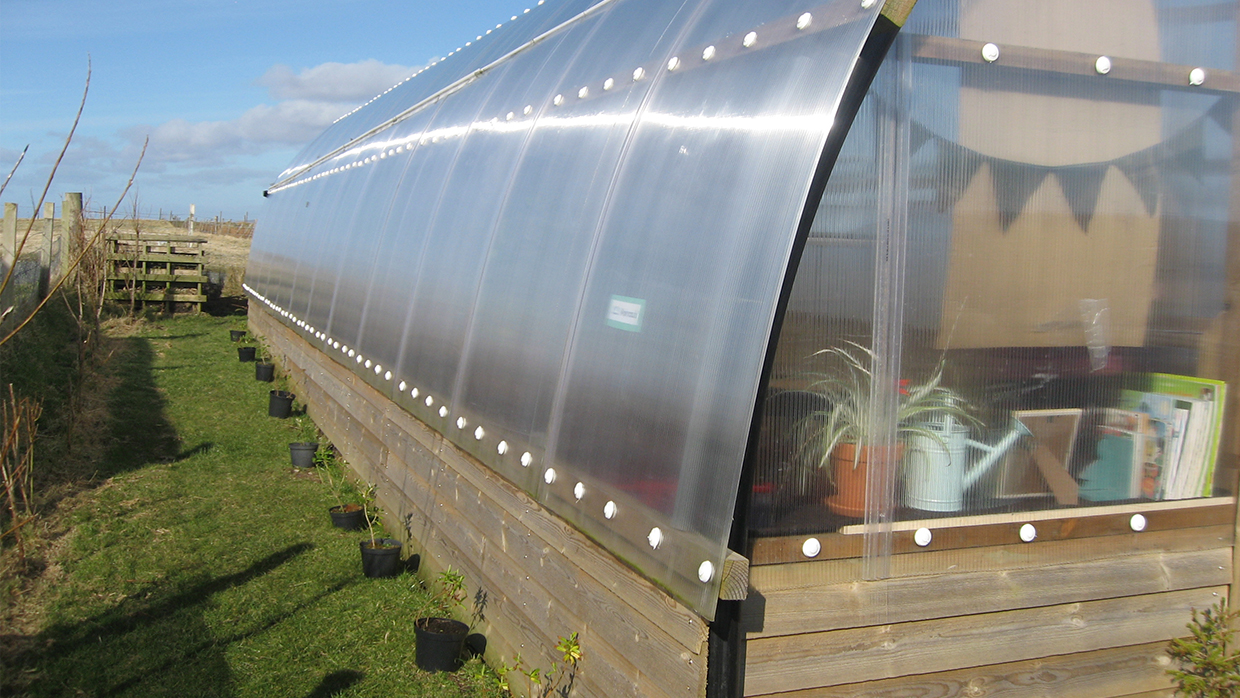 ...including such exotic fruits as olives, lemons and grapes. 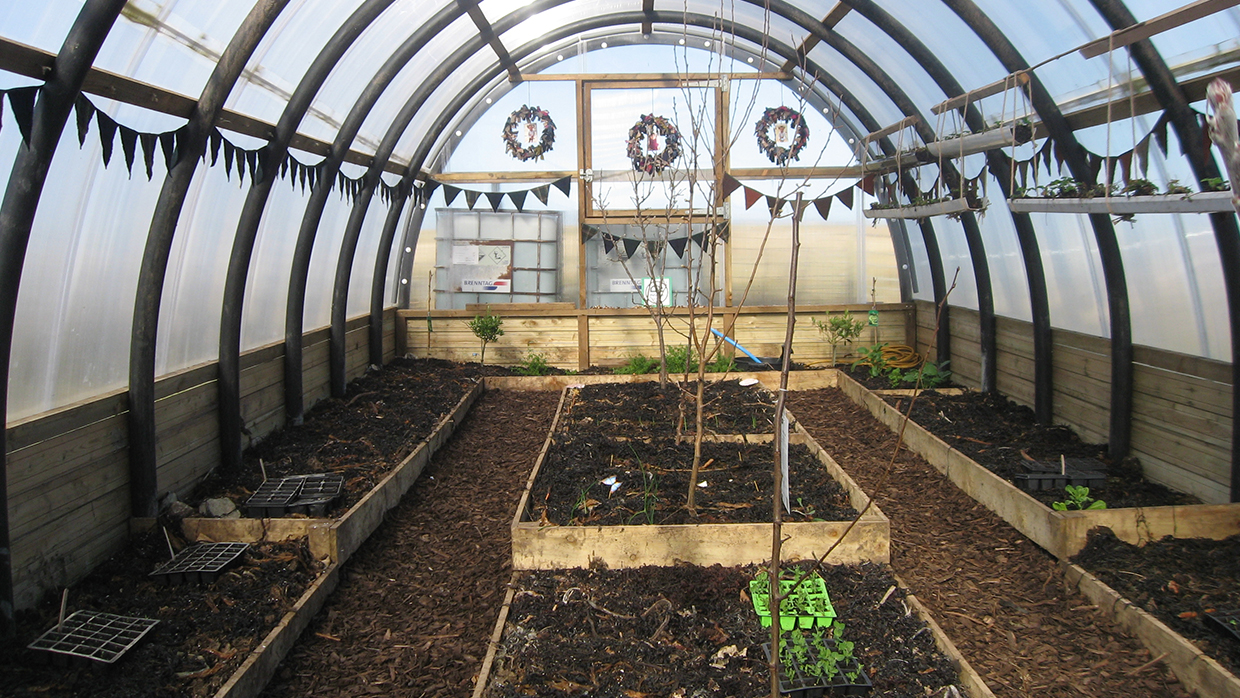 Mrs Macleod has adopted a no-dig system to preserve the natural soil struc­ture.

Caribbean in the UK

Tourism is a big deal on the island – which is no surprise given the stun­ning white beaches and clear seas which look more like the Caribbean than the UK. Towards the south-western tip of moun­tainous Harris, Angus Mackay has used the grant schemes to estab­lish five-star holiday lets – but he’s also investing in his live­stock. “We got a 60% grant to build a new cattle shed so we can bring them inside for the winter,” he explains. “Because of climate change it’s just getting too wet to keep them out.”

Mr Mackay has nine pedi­gree Angus cows plus calves and around 350 Scot­tish Black­face and cross­bred sheep; numbers have dropped sharply in recent decades due to changes in farm support payments and labour. “We used to take 1,000 ewes and 75 cattle by boat to the common grazing on nearby Taransay Island but labour is very diffi­cult to get; 25 years ago there were 10 crofters, now there are only four,” he says. “But there are a lot of young folk coming back – if there wasn’t any money they wouldn’t come.” 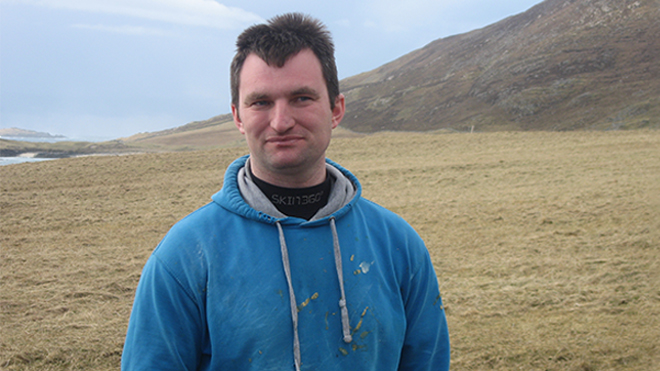 Kenny Mackay took over his own Croft in 2011.

Kenny Mackay is one such young­ster: Although his parents have a croft near Northton, in southern Harris, he took on his own croft in 2011.

A full-time joiner by trade, at 29 he’s now looking at using the grant scheme to build his own house and join together with the other four active crofters to invest in a ‘fank’ or sheep handling facil­i­ties. With a croft of 8ha and access to 1,214ha of common grazing, he runs 140 Scot­tish Black­face ewes which lamb from 10 April.

The ewes and lambs are turned onto the common from 15 May, and are brought back for weaning in August. “The in-bye machair is managed for species rich grass, wetland and salt marsh, so it’s cleared of stock from 15 May to 15 August for nesting birds,” he explains. “We have big issues with sea eagles, golden eagles and ravens – we lose a good 20% of lambs to preda­tion.”

Stornoway holds live auctions in August and September – with store sheep and cattle often heading to main­land Scot­land for finishing on lower, better land. “It’s good to support your local market,” says Mr Mackay. “Crofting is kind of a hobby – all of the money you take out you put back in; we do it for the lifestyle and to keep the tradi­tion going. Once you take the hefted live­stock off these hills there’s no going back.”

Søren and Helle Sven­nesen run the only farm on Barsø in the southern part of the Little Belt, Denmark. Summers are busy here with lots of activity and visi­tors, and there are chal­lenges all year round, both inescapable and self-imposed.﻿