Søren and Helle Sven­nesen run the only farm on Barsø in the southern part of the Little Belt, Denmark. Summers are busy here with lots of activity and visi­tors, and there are chal­lenges all year round, both inescapable and self-imposed.

It is a quiet morning like any other at Bjerggaard on the small island of Barsø, just east of Løjt­land in Southern Jutland. Helle Kreiberg Sven­nesen has the radio tuned to P4 while she gets the 150 or so black and white dairy cows through the herring-bone milking parlour

Mean­while, her husband Søren Sven­nesen drives the wheel loader around and feeds up with the mixer wagon before going to insem­i­nate two cows that Mrs Sven­nesen sepa­rates from the herd during milking. An appren­tice with a skid steer loader is bedding up the cubi­cles and calves.

It is outside of the tourist season and no visi­tors apart from the jour­nalist from Furen are expected today. It is not like the busy period from mid-May to early September, when the small ferry to Barsø is often fully loaded with up to 24 passen­gers and three cars for the 15-minute journey. 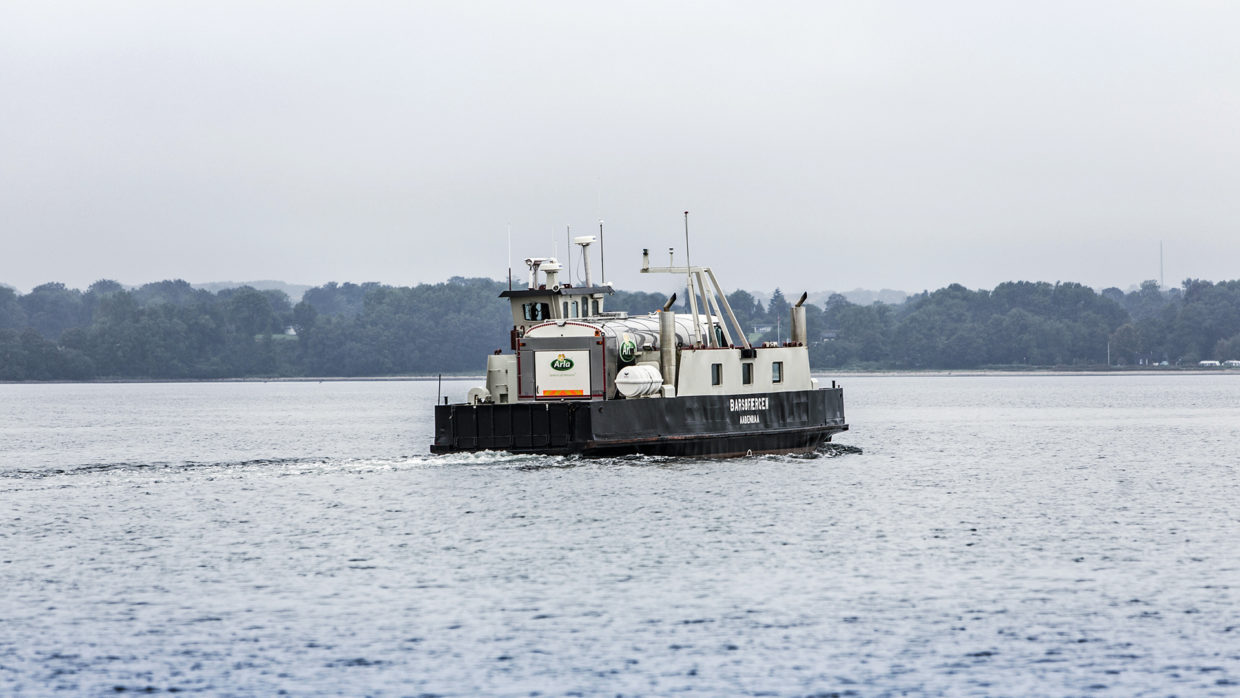 A small ferry connects Barsø with the main­land. 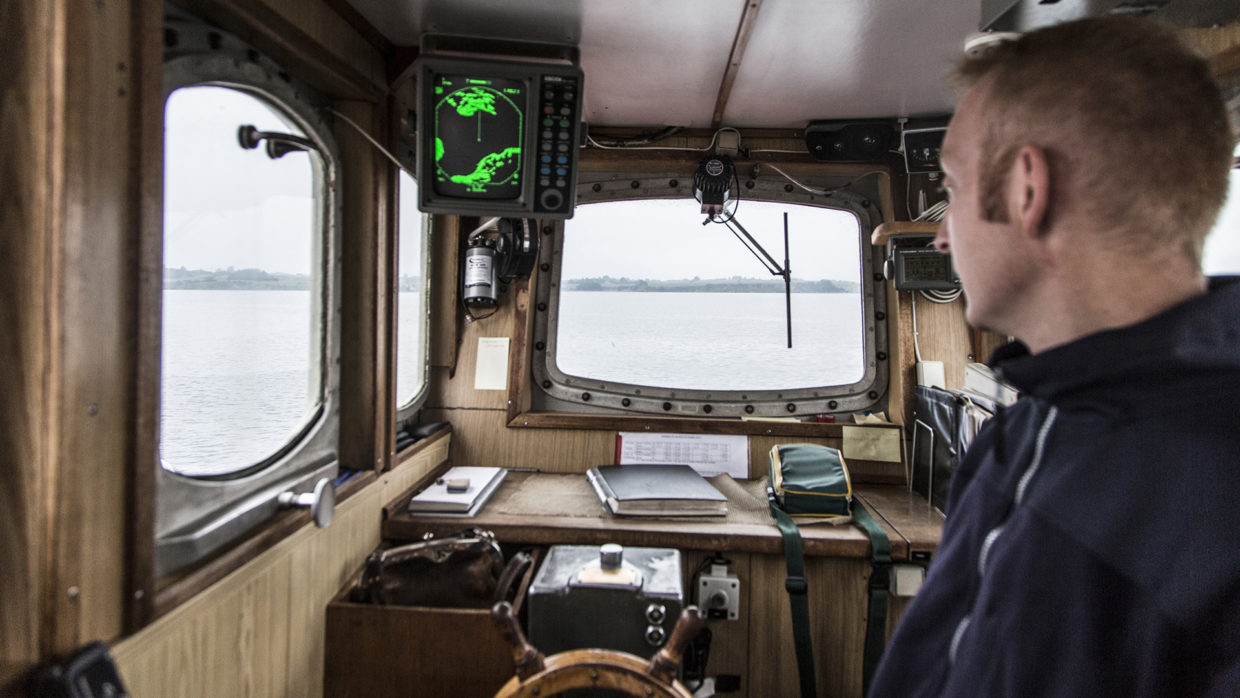 The ship can accom­mo­date up to 24 passen­gers and three cars. 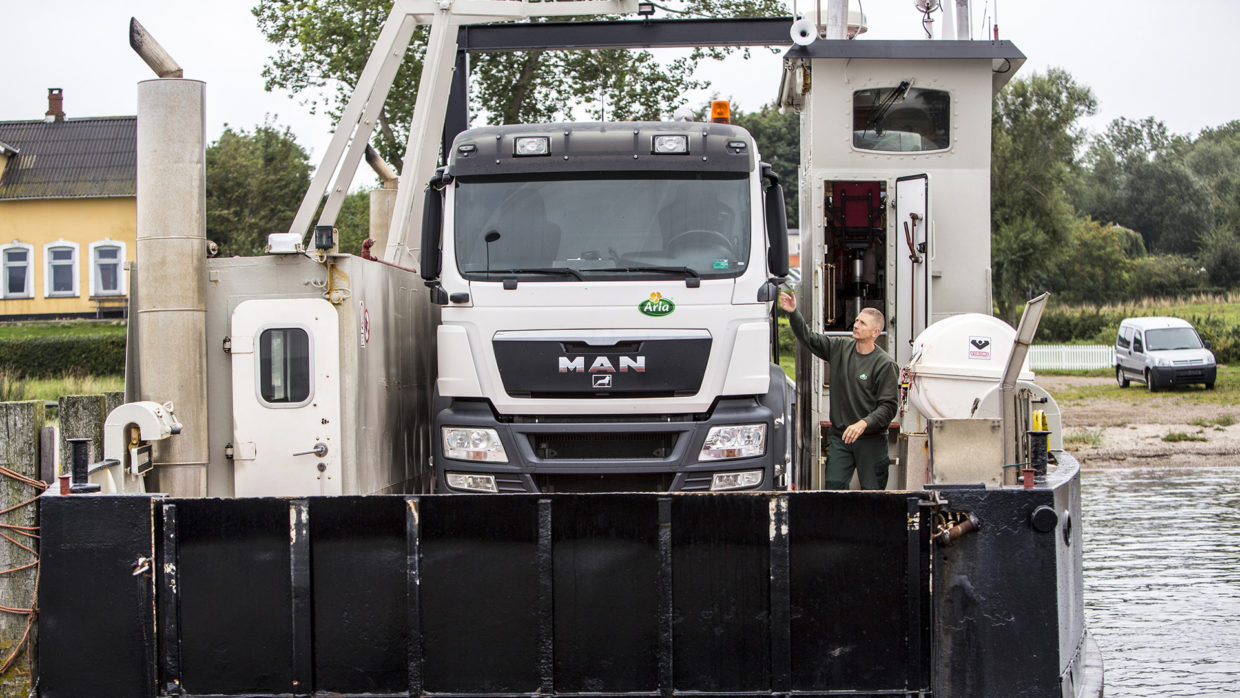 Within 15 minutes the ferry reaches Barsø.

There is a big summer rush of primarily day-trip tourists on Barsø, and this is felt at Bjerggaard, the island’s only remaining farm. Over the season, at least 1,500 people take advan­tage of the oppor­tu­nity to visit the farm and see the cows, calves and farmers.

“It’s usually school and day care centre groups or parents with chil­dren on day trips to Barsø, or perhaps spending the night in the facil­i­ties we have for school camps and the like,” explains Mrs Sven­nesen as she prepares a break­fast of bread with cold cuts, coffee and tea after the morning jobs.

Desig­nated a farm attrac­tion by the Danish Agri­cul­ture & Food Council, the Sven­nesens receive an amount for each school-going child who comes to visit with their class. There is no money in the other visi­tors. “But they should be allowed to visit and see a cow as well,” says Mrs Sven­nesen with a hospitable smile.

The many visiting chil­dren are a major reason why the sow, Olga, is enjoying her annual litter of piglets in an outdoor pen. It is fun for the chil­dren to see the tiny piglets, and later in the year there is pork aplenty to fill the Sven­nesens freezer, as well as those of their friends and family members.

All kinds of water sports

On the whole, summer is very busy on the small island. Not only because of the visi­tors, but also because the Sven­nesen family and their appren­tices enjoy outdoor activ­i­ties during the light and warm months. “We enjoy sailing, swim­ming, water skiing, and all kinds of water sports in general,” says Mr Sven­nesen. “If we finish work early one day, we might take the whole family and the appren­tices on a trip on our motor­boat to Sønder­borg or Aabenraa, for example, and either take food with us or go ashore for a pizza and ice cream.” 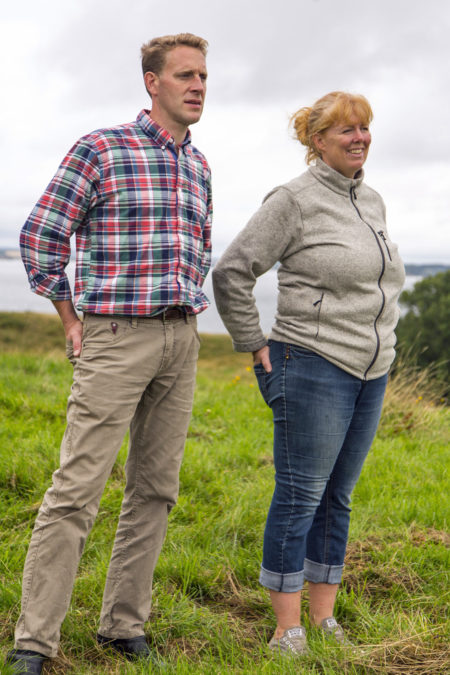 Søren and Helle Sven­nesen run the only farm on Barsø in the southern part of the Little Belt.

The situ­a­tion is quite different on Barsø during the winter. There is no city life to lure anyone out on to the dark roads; instead, they spend quality time at home with board games and shared TV viewing. Oh, then there’s Mr and Mrs Sven­nesens’ annual ski trip they take together with their adult daugh­ters, Caro­line and Fred­erikke, while the appren­tices look after the farm for the week.

What­ever the season, farming on a small island like Barsø presents unique chal­lenges. The small size of the ferry can make things partic­u­larly diffi­cult. “When we built a new cowshed in 2004, we had to mix all the concrete over here because the ferry wasn’t big enough to carry a concrete mixer,” says Mr Sven­nesen. “And the big arches for the roof had to be trans­ported sepa­rately in eight pieces rather than in the more usual two pieces.”

Today, it is the trans­port of straw that causes the islanders the most hassle. When Mr and Mrs Sven­nesen switched Bjerggaard to organic produc­tion in 2016/17, they stopped growing grain. Now the entire – but limited – area of the island has been given over to grazing and the produc­tion of coarse fodder, which is why they buy all the straw they need from a colleague on the main­land.

But straw is flam­mable and there­fore falls under the cate­gory of “dangerous goods”. This means that there cannot be any passen­gers on the ferry when straw is being trans­ported to Barsø. That is, apart from the one person who, according to the rules, must accom­pany the straw when it is being trans­ported by water in case any of the bales catch fire during the crossing.

“We need straw over here during the tourist season as well, at a time when there are often a lot of ferry passen­gers. That’s why we some­times have to pay for an extra crossing without any passen­gers. The straw also has to be wrapped in plastic during the crossing,” says Mr Sven­nesen.

The couple have to collect purchased fodder like corn­meal and soya either from the fodder company or the ferry berth on the main­land using their own truck. The compa­nies won’t send a truck to Barsø, meaning that the Sven­nesens cannot get a bulk discount.

Conversely, the trans­port of milk is not partic­u­larly prob­lem­atic. The milk tanker’s route is planned so that it arrives and returns with the last ferry of the day, and there is an agree­ment with the ferry to wait if the milk collec­tion from Bjerggaard is delayed. Fortu­nately, milk can’t burn, meaning there can be other passen­gers on that crossing! 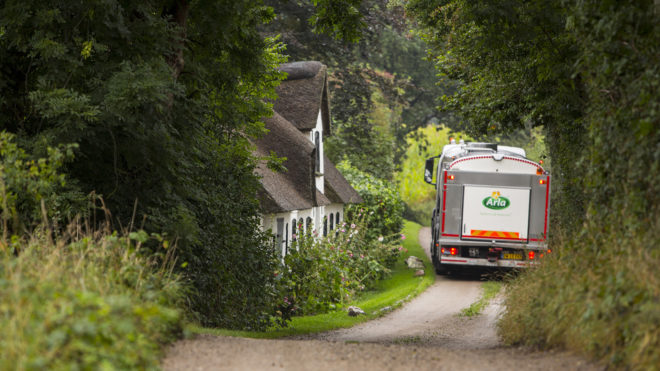 The route of the milk tanker is planned so that the vehicle leaves the island on the last ferry of the day.

However, not all chal­lenges are hassle-free and inescapable. There are also some that are self-imposed and fun. One of them is an elite grazing compe­ti­tion in which the Sven­nesens partic­i­pate along with 47 other organic farms. It involves getting as much grass into the cows as possible during the summer season, thus lowering fodder costs.

“We’ve always come out on top so far, so it’s pretty exciting,” says Mrs Sven­nesen. “We do well because the cows can come and go as they please 24 hours a day. We only bring in the ones who haven’t come back of their own accord for milking.” 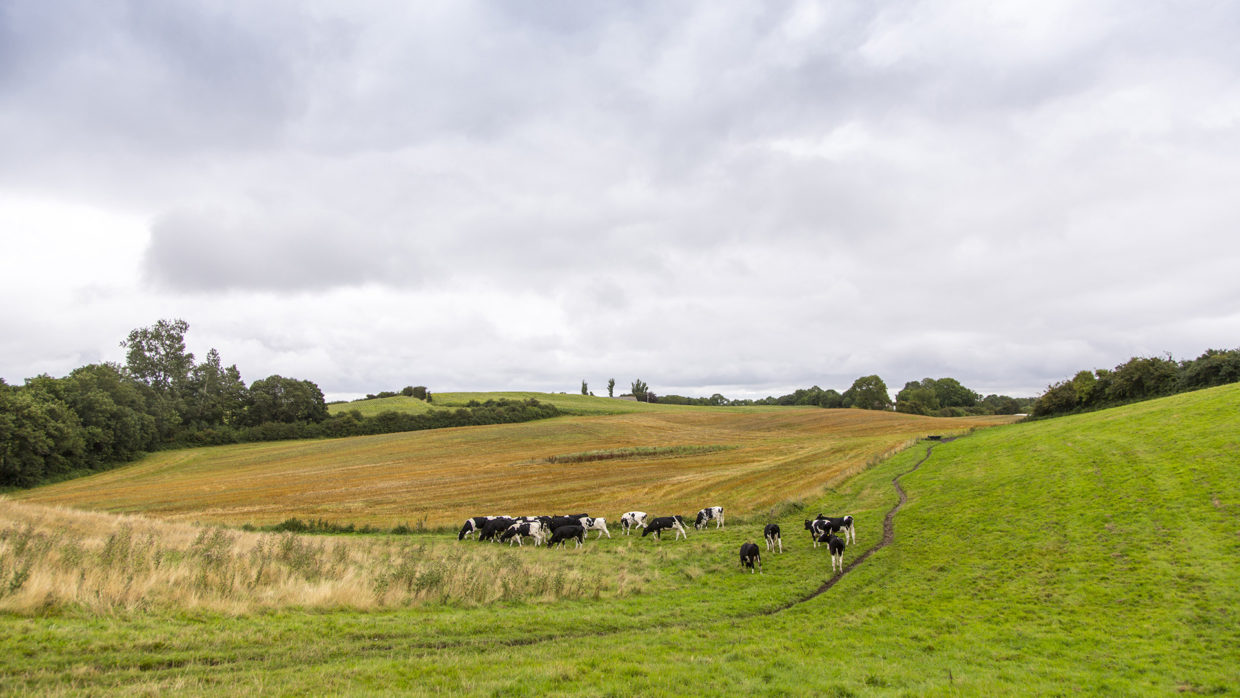 Bjerggaard Farm volun­tarily takes part in a renowned "grazing compe­ti­tion". The aim is to let the cows eat as much grass as possible during the summer in order to reduce feed costs. 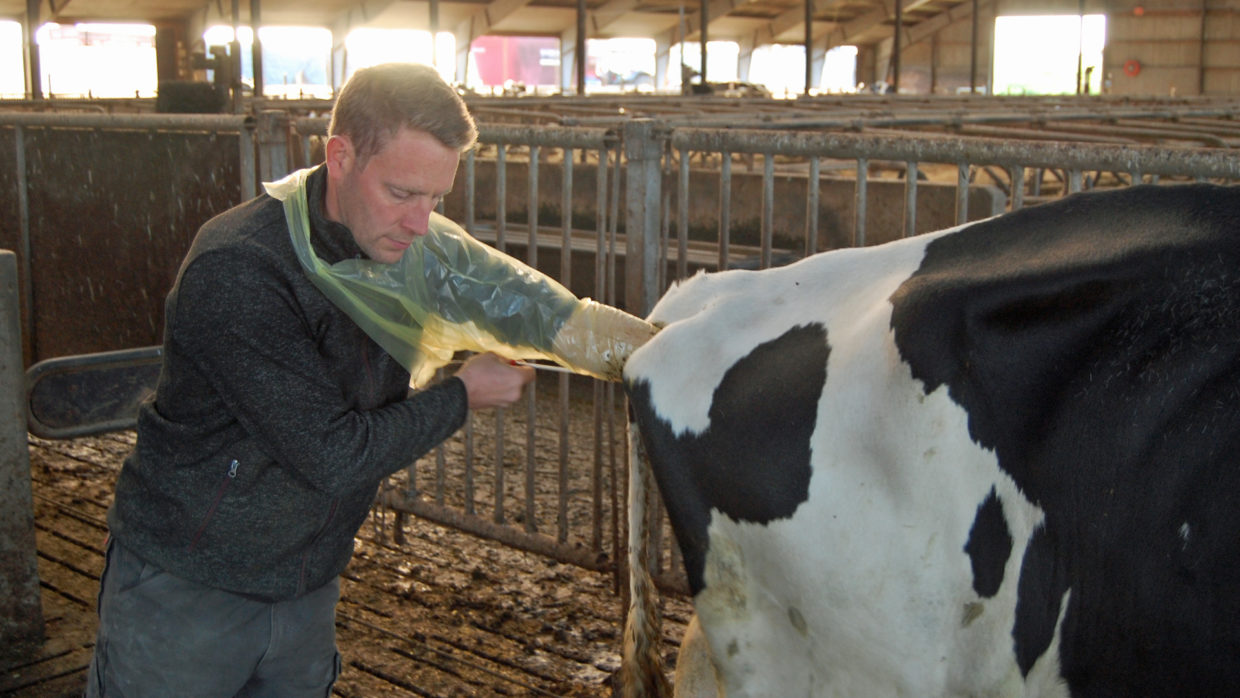 In breeding, the farm pays atten­tion to health char­ac­ter­is­tics and is not afraid to go its own way and try some­thing new. 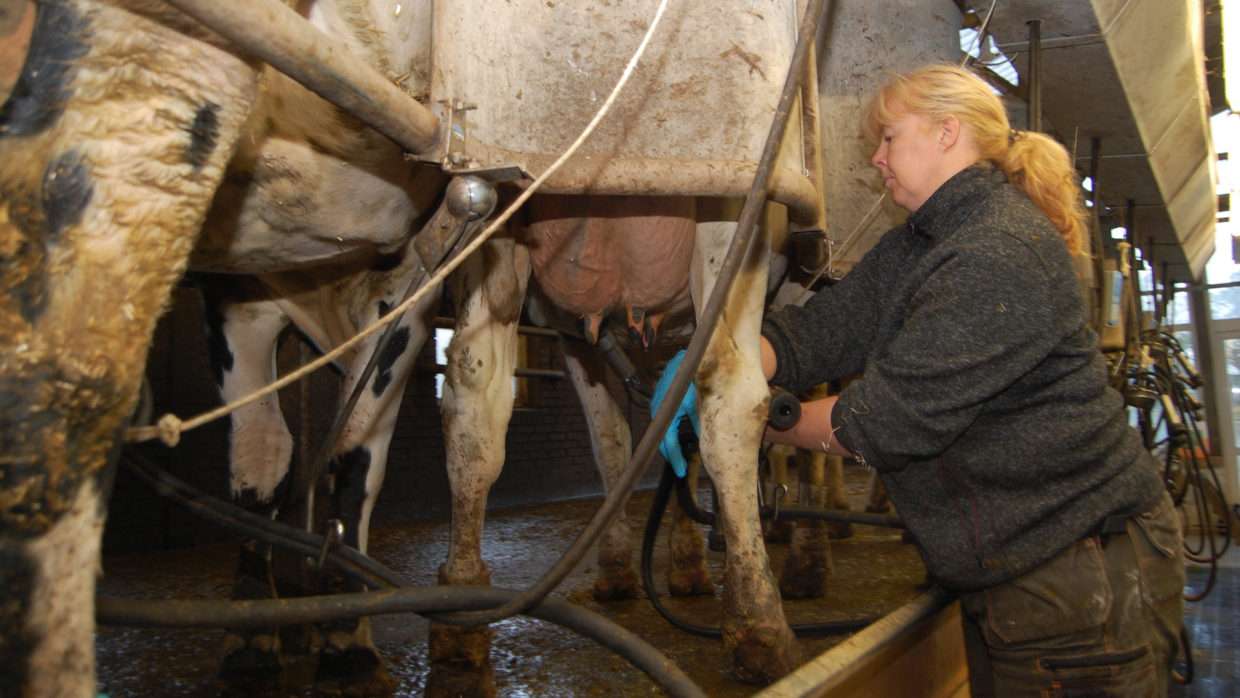 The cows are only brought into the barn if they do not come back for milking on their own.

Bjerggaard Farm is the only farm on Barsø.

Another exciting chal­lenge is the breeding work, for which Mrs Sven­nesen is respon­sible. She does this so well that Bjerggaard has deliv­ered three bulls to the cattle breeding asso­ci­a­tion Viking. “We’re very focused on health in breeding, and we’re not afraid of trying some­thing different,” she says.

“Our first bull to Viking was VH Barso. For him we used semen from the Amer­ican bull Blind­side, which no one else had used in Denmark or else­where, and insem­i­nated one of our best heifers. We still have her and she is now on her seventh lacta­tion. We average about 4.5 lacta­tions per cow.” Mrs Svennesen’s interest in breeding has led to her becoming a member of Viking Denmark’s board of repre­sen­ta­tives. Mr Sven­nesen is also active as a member of the board for Land­boSyd. 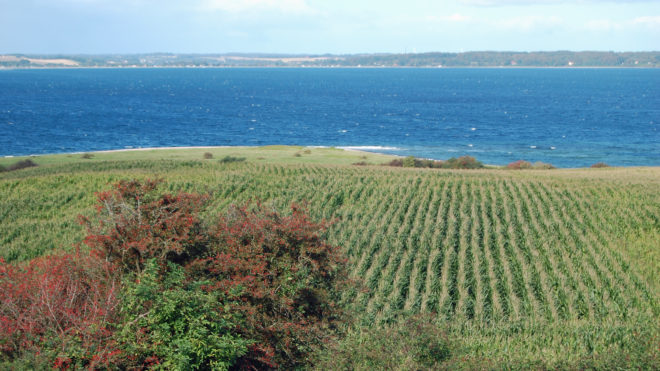 Maize is grown on approx­i­mately 30 hectares on Barsø.

Of course, this means they have to attend some meet­ings on the main­land. But as Mr Sven­nesen explains, this is not a problem: “We have our own boat, which can cross to the other side in just four minutes, and we have a car parked over there. So it’s just as easy for us to get around as it is for everyone else. And if you’re like me and you were born and raised on the island, it’s completely normal to take your boat out when you need it.”

Mrs Sven­nesen is from Hader­slev and lived on the main­land until she met Søren at Gråsten Agri­cul­tural School and decided to become an islander with him. 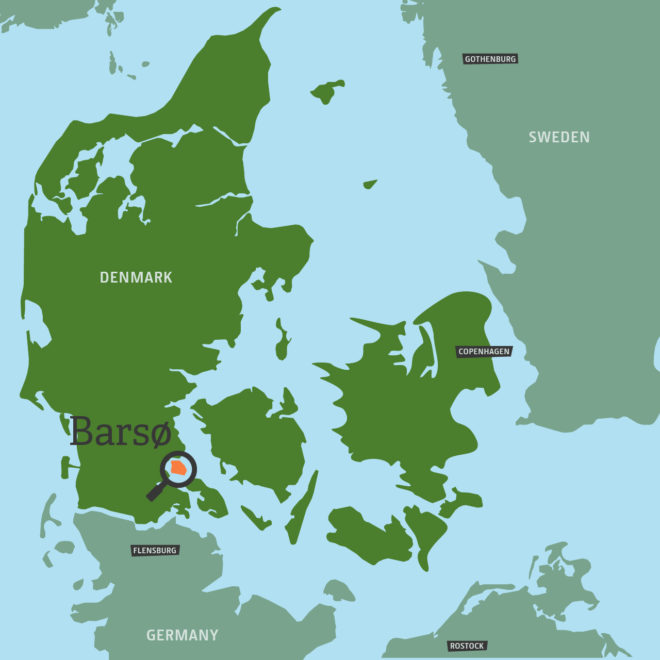 The sound is both exhil­a­rating and deaf­ening. This is Switzer­land at its tradi­tional best: Hundreds of brown cows – complete with cow bells - returning from the alpine pasture to their winter homes, creating a festival for tens of thou­sands of people. Welcome to the Alpa­b­fahrt - the Alp Descent.﻿