The sound is both exhil­a­rating and deaf­ening. This is Switzer­land at its tradi­tional best: Hundreds of brown cows – complete with cow bells – returning from the alpine pasture to their winter homes, creating a festival for tens of thou­sands of people. Welcome to the Alpa­b­fahrt – the Alp Descent.

As Swiss tradi­tions go, this has to be one of the most stir­ring. Seeing the pride on farmers’ faces as they parade their animals – bells clanging – through the streets of the local town, the joy with which onlookers cele­brate the occa­sion, and the tradi­tional music, food and clothing – it’s an atmos­phere never to forget.

And it’s a tradi­tion that goes back hundreds of years – the cows graze the alpine pastures over the summer months, producing rich fresh milk for their calves or to be made into Swiss moun­tain cheese, and are then brought down to their lowland homes for the winter. The move­ment takes place every autumn, involving nearly 1m animals across Austria, Germany and Switzer­land – and in many areas it has become a major tourist attrac­tion.

In Entle­buch – which is one of the world’s 669 bios­pheres, including Yellow­stone National Park and the Gala­pagos islands – the event holds a special place in farmer Hans Felder’s heart. His family have been bringing the cows down from the Alps since 1910 – and it’s a tremen­dous occa­sion.

“It makes me feel very proud that people appre­ciate us and come out to see us – it’s quite impres­sive,” he says. “This is the fifth gener­a­tion to do the Alpa­b­fahrt – the youngest is a year old – and it’s very impor­tant that it continues.”

Mr Felder grazes 33 suckler and milking cows at Mittler Farnere near Lucerne, with 30ha of alpine pasture (4,600 feet up) and 8ha down the moun­tain. His is one of seven farms to take part in the local Alp Descent, which ends up in the town of Schüpfheim, where tens of thou­sands of people turn out to cele­brate.

With his son, five daugh­ters, and grand­chil­dren – who get the Friday off school to prepare for the big event on Saturday – there are around 25 family members taking part in the descent. Prepa­ra­tions include weaving flowers into deco­ra­tive sashes and head-dresses for the cows, polishing the cow bells, and making sure the tradi­tional dresses and suits are clean and pressed. 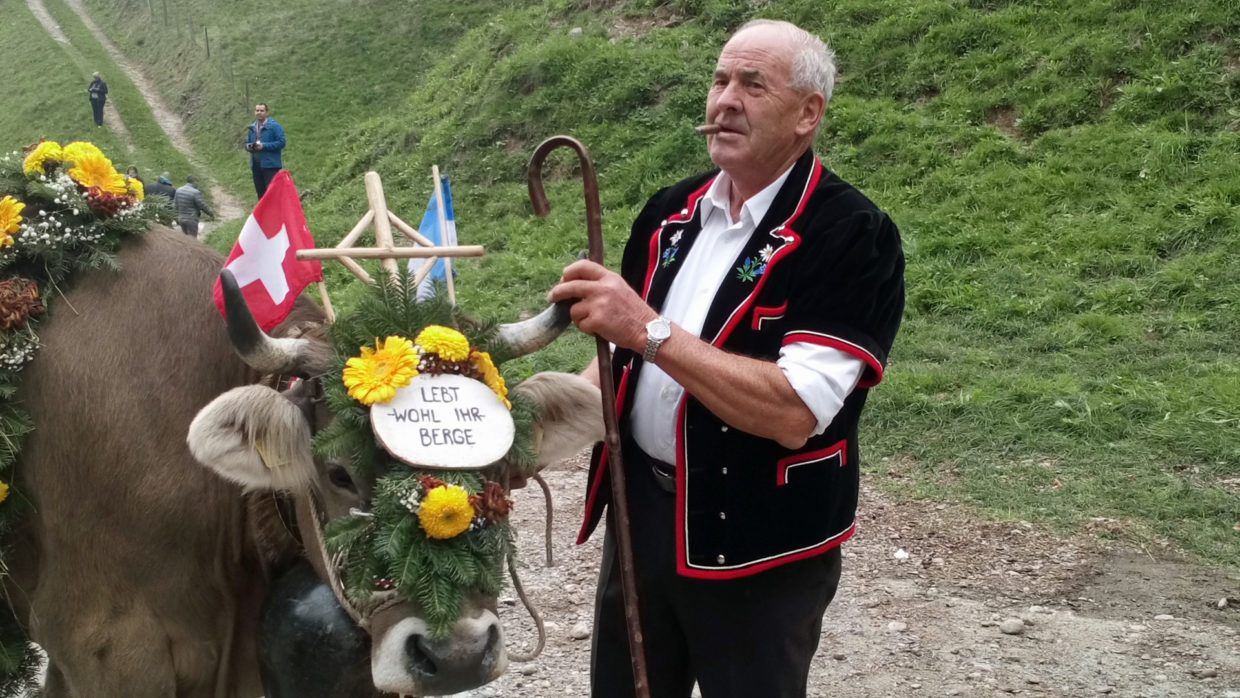 Hans Felder’s family have been bringing the cows down from the Alps since 1910. 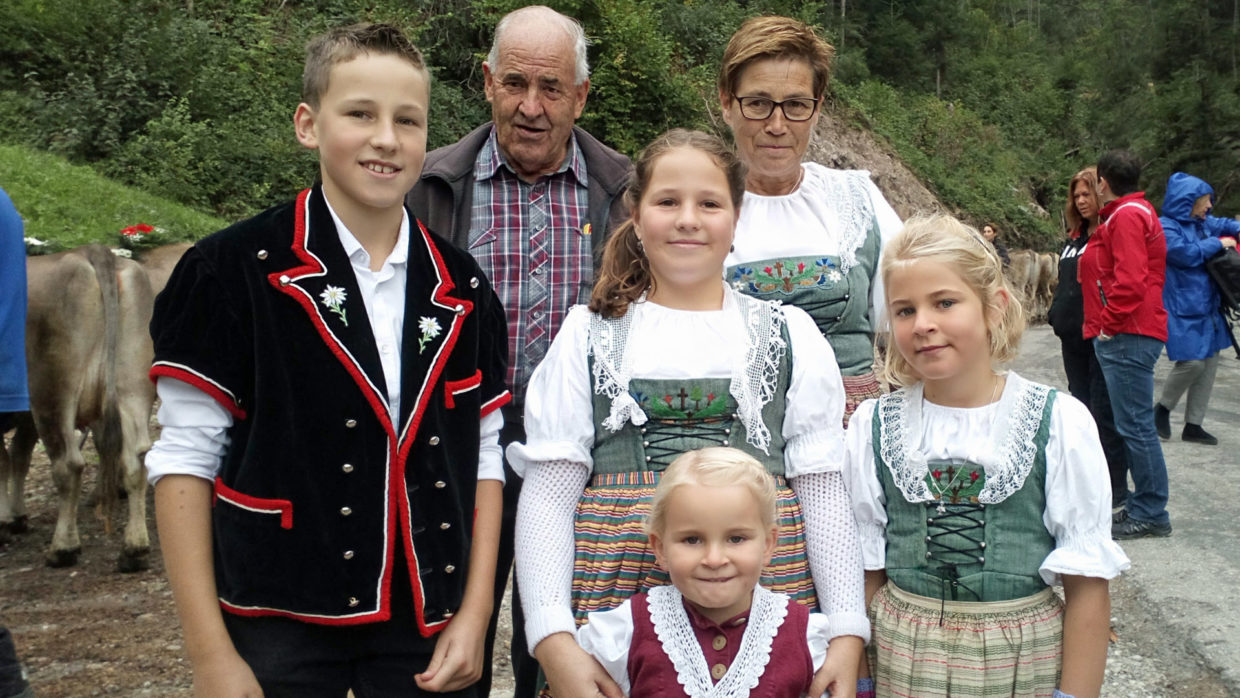 With his son, five daugh­ters, and grand­chil­dren there are around 25 family members taking part in the descent.

The big day arrives, and there is a nervous buzz in the air. With the cows teth­ered in a long line, Mr Felder and his family wash them before attaching the cere­mo­nial cow bells – much larger than those worn while grazing in the fields – along with the flower sashes and head-dresses.

Things get some­what chaotic as another farmer passes by with his own herd of Swiss Brown cows, deco­rated with sunflowers and herded by men in short-sleeved black velvet jackets and women wearing green dresses with pale pinafores. Merry greet­ings are exchanged as the fami­lies sepa­rate their rather friendly cows, and the other family go on their way down the moun­tain.

It’s time to leave. Mr Felder’s grand­chil­dren Robin (12) and Ellie (11) lead the way with two hand­some brown goats, decked out with appro­pri­ately tinkling bells. Next in line comes 78-year old Hans leading the grand-dames of the herd, which are the most heavily deco­rated, followed by the younger cows and calves. 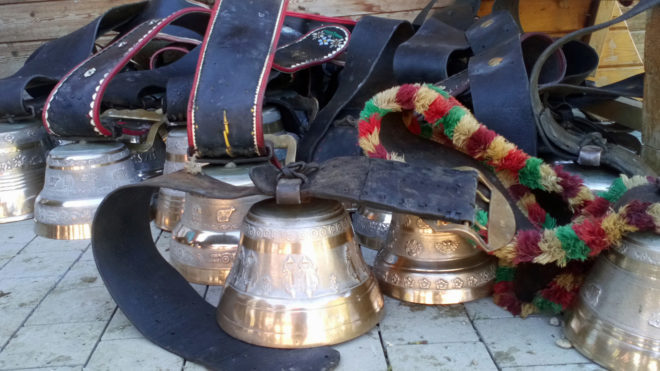 The cere­mo­nial cow bells are much larger than those worn while grazing in the fields.

It could be a health and safety night­mare, as local resi­dents and tourists line the road, snap­ping photos and video of the smiling and waving farmers. But these cows are well handled in their small herds and seem unper­turbed by the inces­sant jangling of the cow bells or their ornate head-dresses.

More than five miles – and nearly 2,300 feet in alti­tude – later, the Felders enter the picturesque town of Schüpfheim. Although it only boasts just over 4,000 resi­dents, today it attracts over 10,000 visi­tors, who throng the streets, frequenting local food and craft stalls and enjoying tradi­tional music and dancing performed by Swiss adults and chil­dren alike.

There is an impor­tant aspect to this local tradi­tion – it really helps to build links between farmers and the general public. Farming in the Entle­buch region is not econom­i­cally viable, so producers rely on govern­ment support as well as adding value to their produce and selling direct. 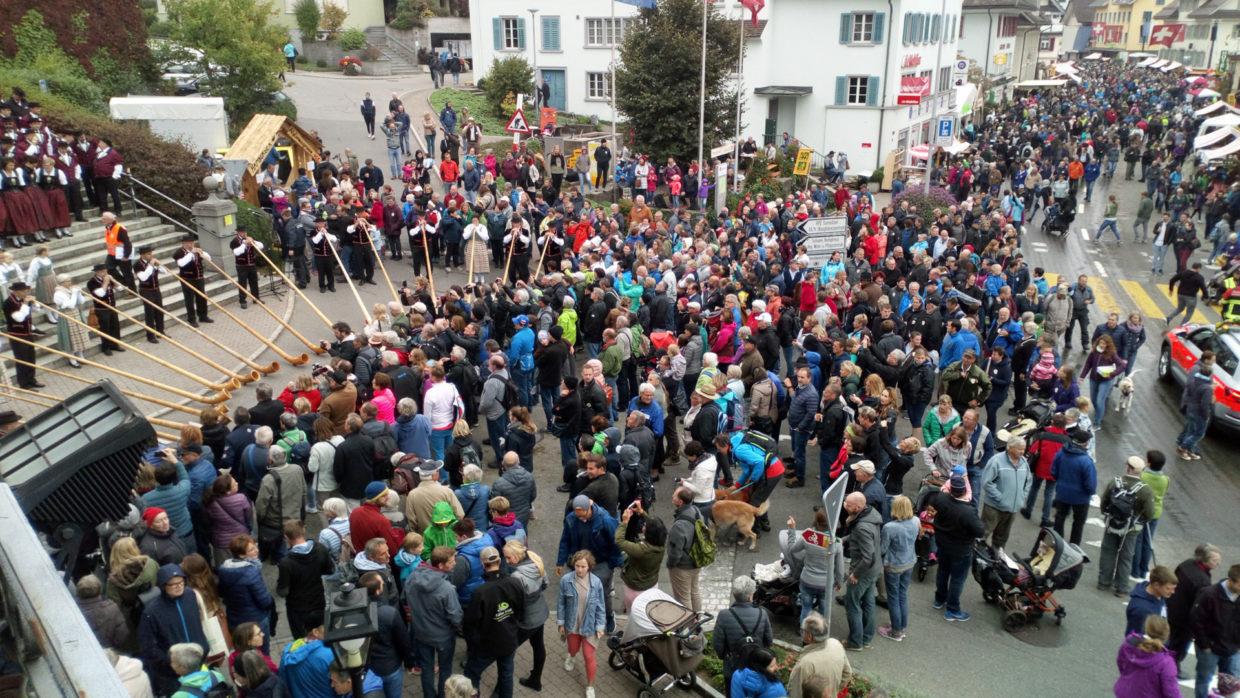 Although the picturesque town of Schüpfheim only boasts just over 4,000 resi­dents, on the day of the Alp Descent it attracts over 10,000 visi­tors.

By bringing the public in direct contact with farmers – and in such a jovial atmos­phere – they see the cows and the pride their owners take in them. They taste the local cheese, meats, bread and beer, and witness the impor­tance of rural tradi­tions. Nestled in the stun­ning Swiss coun­try­side, it’s a festival which cele­brates the wider value of farming as well as the cows them­selves.

As they wave to the crowds and pat their cows on the back, the Felder family look much more relaxed as they enter the final stretch, having success­fully guided their live­stock down the moun­tain roads, ready to head back to their home farm at Steimät­tili, on the outskirts of Schüpfheim. Some farmers even dismantle their milking parlours and relo­cate them in time for the evening milking.

But first it’s time to unwind, knock back a beer and tradi­tional sausage, and enjoy listening to the alpen­horn orchestra and yodeling choir, assem­bled on the steps of the town church. The festiv­i­ties go on well into the evening, but the good­will engen­dered by the Alpa­b­fahrt will last for a life­time.