Adapting farming prac­tices to boost insect life can have massively bene­fi­cial effects on farm produc­tivity and chem­ical require­ments. So how does it work?

Growing pres­sure on pesti­cide use has put inte­grated pest manage­ment (IPM) at the centre of regen­er­a­tive and sustain­able agri­cul­ture.

That pres­sure comes from several sources, including consumer concern, which has led to more strin­gent envi­ron­mental regu­la­tions and removal of prod­ucts from the market­place. There are also fewer new pesti­cides in the pipeline to replace them, with no entirely new chem­istry on the horizon. Worse still, pest resis­tance to certain active ingre­di­ents has rendered other prod­ucts inef­fec­tive.

The long-term outlook then, points to using chem­ical controls with care, ideally as a last resort, within a wider IPM strategy.

Most conven­tional growers already employ at least some IPM tech­niques like pest-resis­tant crop vari­eties and diverse rota­tions. But researchers are now urging conven­tional growers to boost natural pest control using bene­fi­cial inver­te­brates. While growers may think this will reduce yields there is growing evidence, based on prac­tical research, suggesting other­wise.

Researchers from the UK Centre for Ecology & Hydrology (UKCEH) and Rotham­sted Research have been working with farmers to increase popu­la­tions of crop pest preda­tors in the centre of large arable fields. This work is part of a large, govern­ment-funded programme called Achieving Sustain­able Agri­cul­tural Systems (ASSIST). 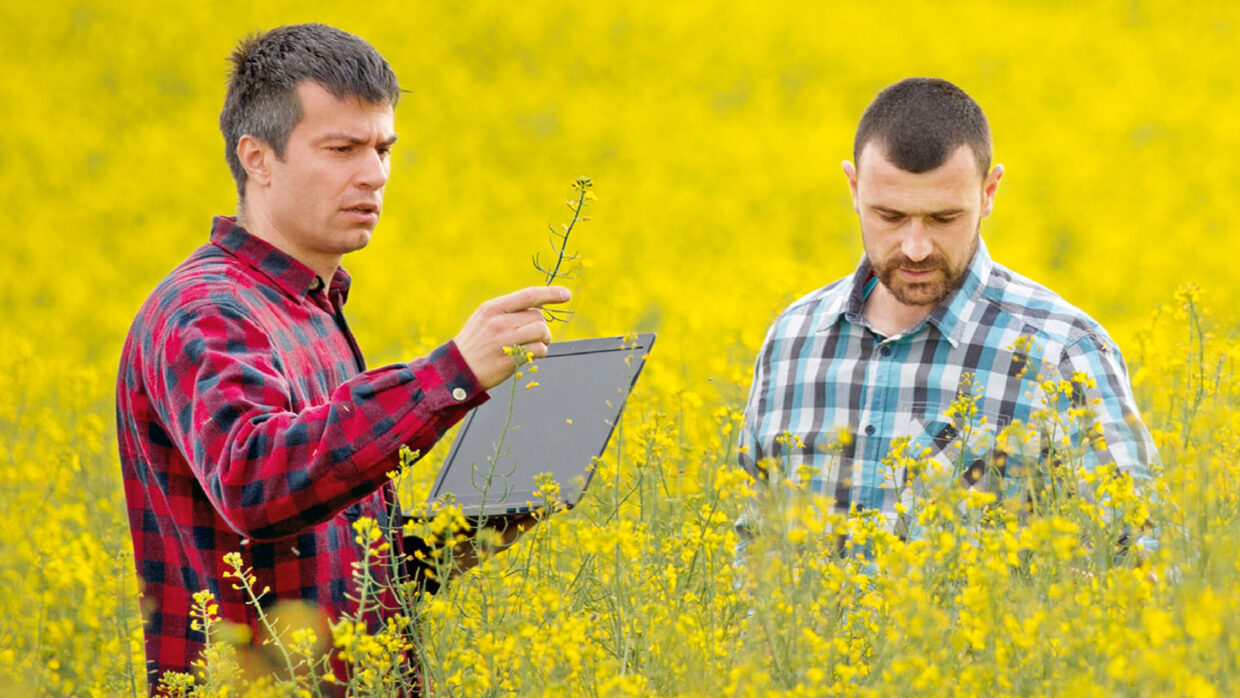 Researchers looking at how to increase the popu­la­tion of crop pest preda­tors. (Photo | Adobe)

Modern agri­cul­tural prac­tices have caused a decline of crop polli­nating insects, aphid-killing lady­birds and spiders, along with ground beetles which previ­ously attacked slugs and other larvae.

Beneath the soil, worm popu­la­tions which had improved the fertility and struc­ture, drainage and work­a­bility of land, have been reduced by pesti­cides, over-cultivation and a lack of organic matter. “The loss of these bene­fi­cial species has added to the over-reliance on pesti­cides and fertilisers required to main­tain yields,” says Prof Pywell.

However, research has demon­strated that restoring habi­tats rich in certain wild­flowers that encourage these species can help redress the situ­a­tion, rela­tively quickly.

And the creation of wildlife habitat doesn’t have to be detri­mental to profit margins. Virtu­ally all farms have low-yielding or awkward areas, including head­lands, in-field pylons and trees. Removing these areas from produc­tion to create wildlife habitat can actu­ally increase overall prof­itability.

“But, while many growers already drill field edges with wild­flower seed mixes under stew­ard­ship agree­ments, there is a need to go further,” Prof Pywell says. The bene­fits of natural pest control provided by preda­tory insects diminish rapidly 50m from the flower-rich field margins, so the crop centre can still become a pest haven.

To tackle this issue ASSIST has trialled wild­flower strips in field centres to maximise natural pest control. The strips work within farm oper­a­tions, fitting in with tram­lines and drilling, and are not connected to the head­land. This allows effi­cient farming around the end of strips and avoids adding awkward corners to the field. 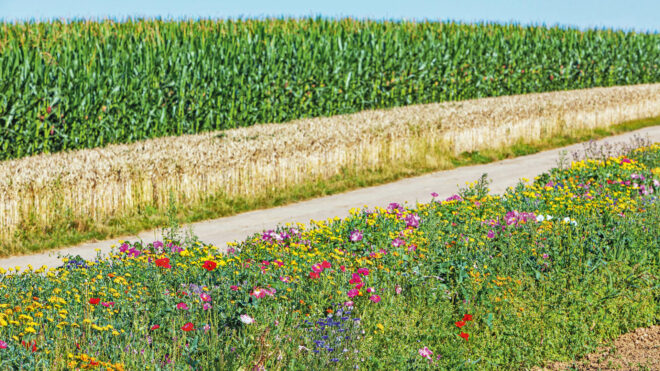 As well as in-field flower strips, other tech­niques are being eval­u­ated including estab­lishing oilseed rape in long cereal stub­bles and sowing companion crops like buck­wheat and berseem clover. Together these show promise in reducing damage to the crop cause by cabbage stem flea beetle.

“The combi­na­tion means crops are less prone to drought stress while being better able to support traffic, allowing field­work to be carried out in a more timely manner.”

Arable grower Tom Sewell has adopted organic farming and no-till tech­niques with huge success. Sewell Farms is a family-run part­ner­ship, managing about 567ha in the Medway Valley, Kent, for 15 landowners under various tenures. It also owns a small propor­tion of land. 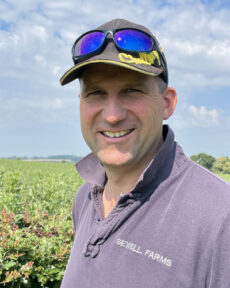 The land has not needed any insec­ti­cide for four years and no seed treat­ments have been used for the past two growing seasons. Despite the lack of chem­ical inputs, wheat yields are between 10t and 12t/ha. Mr Sewell, a former Nuffield Scholar who studied regen­er­a­tive and no-till prac­tices in 2013, says the farm’s strategy began by ques­tioning every long-held, routine method used. As a result of that review, all non-essen­tial culti­va­tions have been cut out. There are no second wheats, with a break crop always following in the rota­tion – which also includes barley, oats, beans and grass­land. Variety choice is pivotal to the strategy with Extase winter wheat chosen for its good disease-resis­tance prop­er­ties and its high-yielding char­ac­ter­is­tics.

Mr Sewell uses compost from soft fruit farms, rather than bagged fertiliser, with companion and cover crops helping to boost soil fertility and reduce weed species. He routinely moni­tors soil nutri­ents to ensure he only applies what the soil needs. Because of this he hasn’t used any bagged P or K for almost 20 years.

Liquid nitrogen appli­ca­tions are minimised because Mr Sewell says the stim­mu­lated growth leads to thinner, weaker cell walls in the plant, increasing its vulner­a­bility to pest and disease attacks.

He chops straw stubble and sprays off any volun­teers within 24 hours of drilling, ensuring cover is main­tained up to the last moment. A devel­oping tech­nique is to leave the stubble about a foot high, which has impor­tant bene­fits. Firstly, the long stubble provides a break from the wind, which would other­wise dry out the surface and result in erosion. It also helps retain mois­ture at the soil surface.

In a way we have become live­stock farmers, producing insects above ground and worms beneath the soil surface.

“Even during dry periods there is mois­ture in the soil helping to main­tain its struc­ture – which is tilthy and crumbly,” says Mr Sewell.

The third crucial benefit is to act as a haven for insects across the whole field. The result has been spec­tac­ular. “In the morn­ings the field surfaces are silver with dew on the webs of wolf spiders,” Mr Sewell says. The spiders then take out the aphids, keeping numbers below spray thresh­olds.

“In a way we have become live­stock farmers, producing insects above ground and worms beneath the soil surface,” he says. “Ground beetles tackle the slugs and larvae in the soil so that we no longer have any problem with these, removing the need for seed treat­ments.” 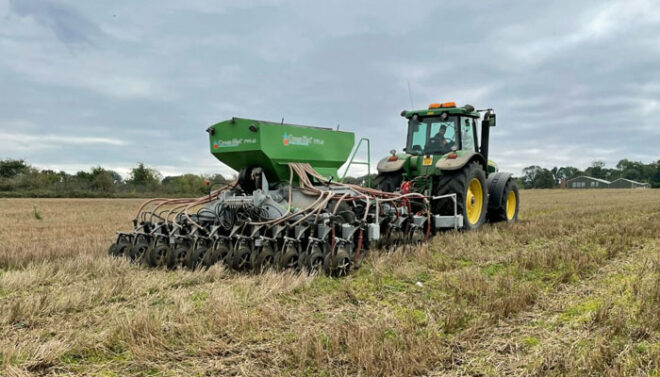 A recent worm count revealed a stag­gering 12 million worms per hectare. “The worms do a fantastic job for us by drag­ging organic matter deeper into the soil and recy­cling nutri­ents. Their action bene­fits soil stability and struc­ture so that while soil is free-draining and provides a solid base for drilling, it retains mois­ture in the organic matter,” he explains.

Despite the lack of chem­i­cals on the farm, glyphosate is used once a year to provide a clean slate for the crops to go in. “We need to retain certain chem­i­cals for the future and that is another good reason for using them so spar­ingly,” Mr Sewell says. And using as little as possible bene­fits the bank balance, too. 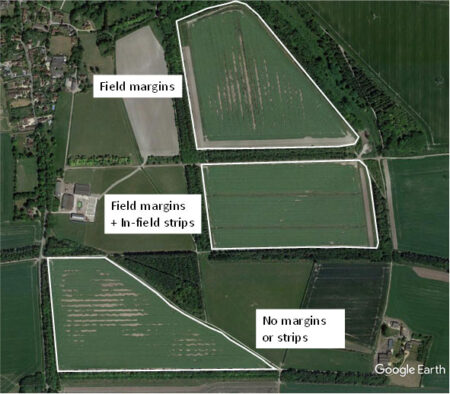 UKCEH has recently released a free, web-based tool called the E-Planner which maps the suit­ability of every field across Great Britain for the creation of a range of wildlife habi­tats, including wild­flowers, wild bird food, buffer strips and wood­land. Farmers can then use the free UKCEH phone app called E-Surveyor to easily assess how successful habitat creation has been. The app uses image recog­ni­tion tech­nology to iden­tify the plant species and compare them to the seed mix.

Farmers in Sweden, France and Germany are striving to retain water when there is plenty avail­able so they can use it during dry summer months. Water is stored in ponds, marshes, or in the ground. The Furrow reports.﻿