Bees as helpers in crop protec­tion

Preci­sion agri­cul­ture conjures up visions of satel­lites, computers, sensors, and other wonders of the elec­tronic age. But a new fungi­cide appli­ca­tion tech­nology rolling out across the America’s main berry growing regions uses a slight vari­a­tion of one of the world’s oldest agri­cul­tural prac­tices, beekeeping. It’s possibly the most precise appli­ca­tion tech­nology yet. “The process is called bee vectoring,” says Dr. Sue Willis Chan, manager of the Univer­sity of Guelph’s 2020 Bee Vectoring Project. “Bees pick up small parti­cles that contain biocon­trol agents as they leave their hive and dissem­i­nate them to flow­ering crops. It works for straw­ber­ries, rasp­ber­ries, apples, coffee, cucum­bers, and poten­tially sunflowers and some canola too. Essen­tially, it can be used with any flow­ering crop that uses bees for polli­na­tion.”

Plant protec­tion from flower to flower

The concept, first pioneered at the Univer­sity of Guelph in Ontario back in the 1990s, is simple. Biocon­trol agents are diluted in powder-based diluent and placed in dispensers. Some dispensers are cartridges designed to snap into specially constructed bumblebee hives, others are mounted onto honeybee hives. 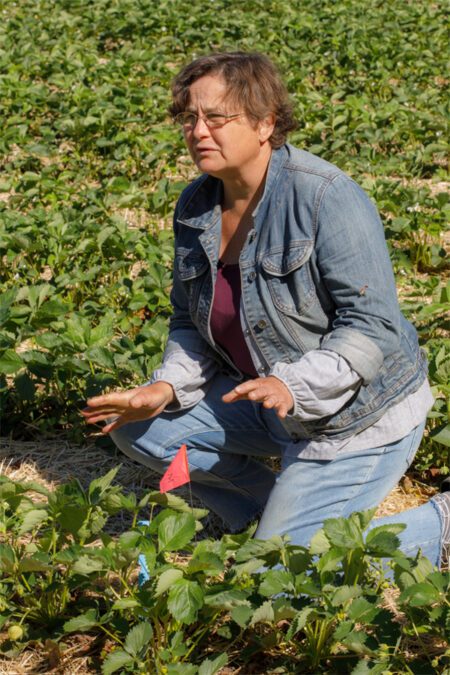 Dr Sue Willis Chan, head of the Bee Vectoring project at the Univer­sity of Guelph, believes the process is applic­able to all crops where bees are used for polli­na­tion.

The bees pass through them as they leave the hives and the diluent clings to their body hairs. It’s carried with them when they fly off to collect pollen or nectar from flowers. Once they land it rubs off onto the flower, where it protects the blossom from pathogens like botrytis (grey mold). Other polli­na­tors can then spread it further as they flit from flower to flower.

Biocon­trol agents work really well in controlled green­house envi­ron­ments, Willis Chan says, but it’s less known how they’ll work outdoors in crops like straw­ber­ries. Chan’s study with both beekeepers and berry producers will deter­mine how well it does and will make sure the prod­ucts being used won’t adversely affect wild bees and other polli­na­tors.

Currently one company, Bee Vector Tech­nology (BVT) based in Missis­sauga, Ontario, has a system regis­tered by the EPA for field use in America’s main berry growing regions. Only a few growers were able to try it out in 2020, but BVT’s CEO Ashish Malik expects it will be widely avail­able in 2021. They plan to have it regis­tered in Switzer­land and Mexico for 2021 and hope to get approval for the Euro­pean Union and Canada.

“Our system uses bees to disrupt the grey mold cycle by deliv­ering a strain of Clonos­tachys rosea, BVT-CR7 combined with a diluent called Vectorite, directly to the source of the infec­tion on the flowers,” Malik says. “Since it’s very targeted, it’s very effi­ca­cious. You’re not wasting any product. We’ve been able to demon­strate that you can reduce the amount of product over the course of the blooming season by up to 98%. Plus, CR7 is a biolog­ical product, it can be used in either conven­tional or organic berry produc­tion.” 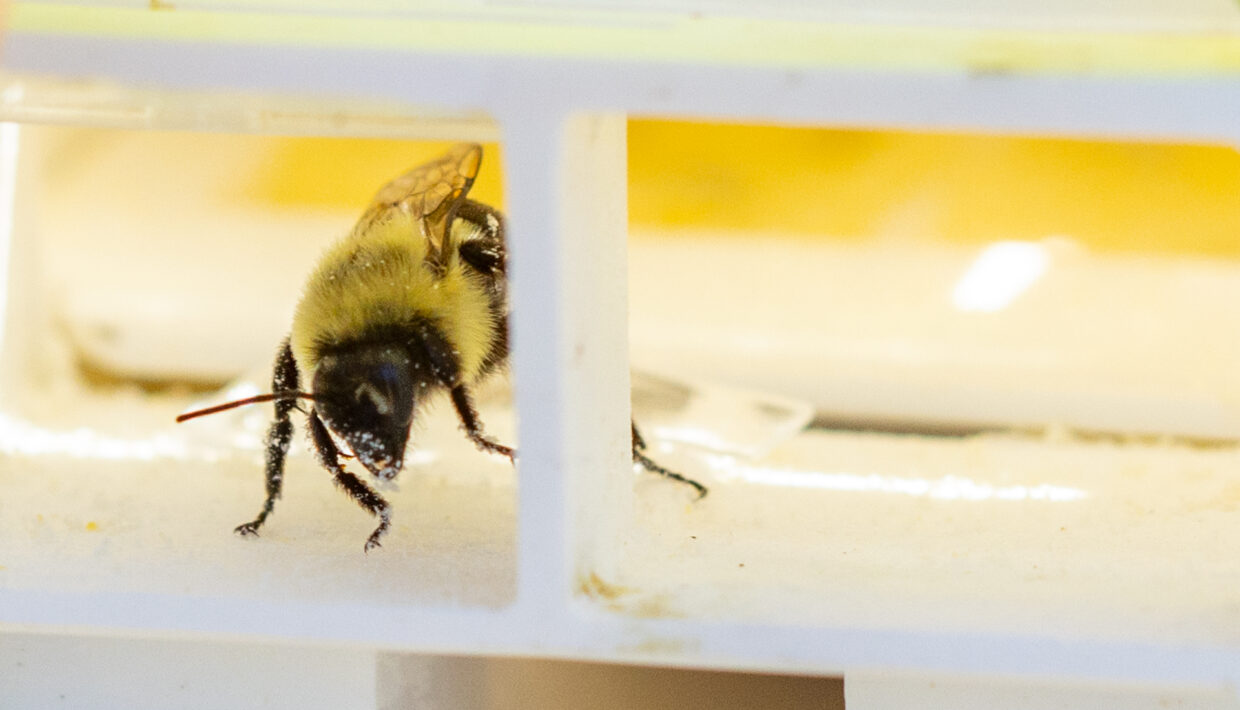 The product is placed in special cartridges that the bees have to pass through as they leave the hive. Su Willis Chan says that the process works for any crops that use bees for polli­na­tion.

Bees and farmers working together

Many pluses. The biggest advan­tage to bee vectoring is its simplicity; it’s only a slight vari­a­tion from what producers using bees for polli­na­tion are already doing. But it cuts down on the urgency to spray fungi­cides on a crop like straw­ber­ries every 7 to 14 days to control grey mold. Since CR-7 is biolog­ical, it isn’t one of the prod­ucts that contribute to straw­ber­ries’ noto­rious posi­tion on the “Dirty Dozen” list.

“This means that bee vectoring should reduce the machinery, fuel, water, and manhour costs asso­ci­ated with spraying fungi­cides on these crops,” Willis Chan says. “The bees are the ones doing all the work. Biocon­trol prod­ucts are expen­sive and quite short lived; but bees aren’t deliv­ering the biocon­trol agents willy nilly, they’re applying it directly, contin­u­ously, and where it needs to be.”

BVT’s Vectorite cartridges have to be replaced every fourth day throughout the flow­ering window but bees use the product so effi­ciently that the price is competi­tive, on a per acre basis, to conven­tional fungi­cide spray programs. It offers solid economic returns, Malik says. Growers have report­ed 28 to 30 percent higher yields in blue­ber­ries because the diam­eter of berries on treated plants are 10 to 11 percent bigger than those in conven­tional spray programs.

Another big advan­tage is that biocon­trol prod­ucts applied by bees have a zero-re-entry interval (REI). Workers can be in the field harvesting or performing other tasks while the bees are working. That’s huge for straw­berry grow­ers who must contin­u­ally balance the need to have workers in the field harvesting berries around conven­tion­ally applied prod­ucts’ 4-hour to 2-day REIs. 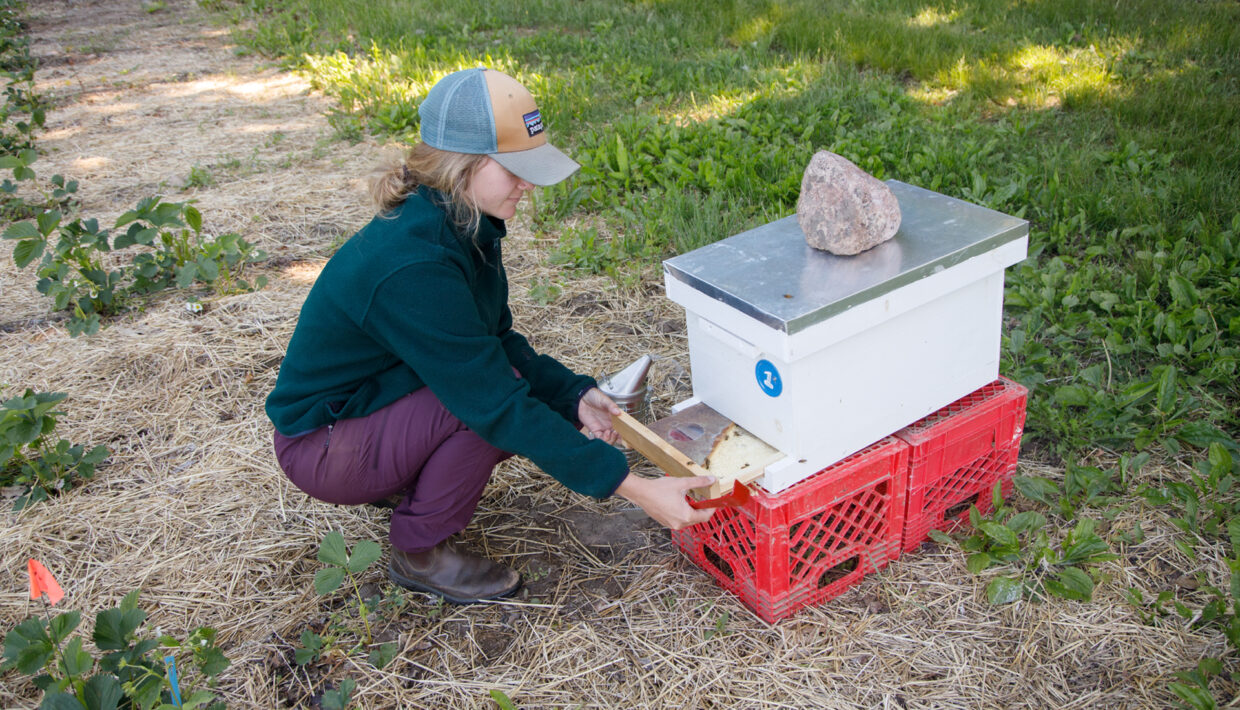 Wiilis Chan’s study is testing a variety of honeybee hive modi­fi­ca­tions for bee vectoring. BVT is the only company that has received approval by the EPA to deliver biocon­trol agents via bee vectoring for field crops in the United States.

No panacea. Willis Chan cau­tions producers not to expect bee vectoring to be a panacea since it’s only useful for diseases and insects that affect blos­soms. It’s not a solu­tion for leaf, stem or root dis­eases. There is also some vari­ability between hives. Bees are smart living crea­tures, she adds. Some hives spend a lot of time kicking the diluent out of the dispenser onto the ground in front of the hive.

Another issue is that bees don’t like to forage in the rain. So, if you get into an extended period of rainy weather, they’ll be less likely to be carrying the biocon­trol agent to the flowers. “I can see producers might develop a system that gives them the best of both worlds,” Willis Chan says. “Under a convention­al system they could apply fungi­cides and insec­ti­cides with a sprayer prior to flow­ering and switch to bee vectoring once they start to flower. This elimi­nates any possi­bility of getting fun­gicide or insec­ti­cide residue on fruit because there is no fungi­cide applied during the flow­ering and fruit develop­ment period. Plus, producers will use much less fungi­cide overall; it might just hit the sweet spot.”

Heliotropic sunflowers (which follow the sun’s move­ments) are resilient to scorching summer weather. And high yielding vari­eties which are rich in oleic acid are the prime mate­rial in healthy and sustain­able vegetable oils.﻿