Targeted N fertiliser appli­ca­tion in wheat using NIRS tech­nology on slurry can boost yields by up to 5%, with addi­tional yield after just one appli­ca­tion. Holger Huffel­mann attended a prac­tical test at Haus Düsse and explains the setup and possi­bil­i­ties offered by NIRS tech­nology.

Holger Huffel­mann is a trained, state-certi­fied and learned farmer. At the Haus Düsse Trial and Training Centre, Bad Sassendorf, Germany, he is respon­sible for agri­cul­tural field oper­a­tions as well as plan­ning and imple­menting the arable trials. He is still fasci­nated by the range of diverse tasks on the farm, in the trials and in the office. At Haus Düsse, he is trying to counter the increasing admin­is­tra­tive and organ­i­sa­tional work­load created by legal regu­la­tions – like fertiliser docu­men­ta­tion – by using digi­tal­i­sa­tion and automa­tion processes.

We speak to Mr Huffel­mann about the programme:

How did the idea for the slurry appli­ca­tion trials come about? 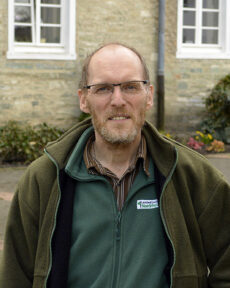 Holger Huffel­mann is in charge of the field trials at the Haus Düsse Trial and Training Centre, among other things

As part of the Water Frame­work Direc­tive, we have already exper­i­mented with NIRS tech­nology at the Chamber of Agri­cul­ture, measuring the amount of nutri­ents in the slurry as it moves between the storage tank and the slurry drum. However, this way we only get a total value for the nitrogen (or other nutri­ents) contained, which is then applied to a specific area from the drum content. There­fore, we came up with the idea of using NIRS tech­nology to measure and control the applied amount in-line.

What has come out of your wheat field tests so far?

We were able to deter­mine that, compared to the constant volume flow by m³, the total-N variant based on NIRS delivers a yield advan­tage of approx. 3%, and the ammo­nium-N option delivers an advan­tage of 4-5%. With an average yield of 7.5-8.0t/ha, this means addi­tional revenue of €40-70/ha (£35-60/ha). In addi­tion, the targeted N appli­ca­tion makes the supply to the crop more uniform and reduces lodging. Another advan­tage is that the farmer can better comply with fertiliser regu­la­tions and keep up with the rele­vant docu­men­ta­tion. 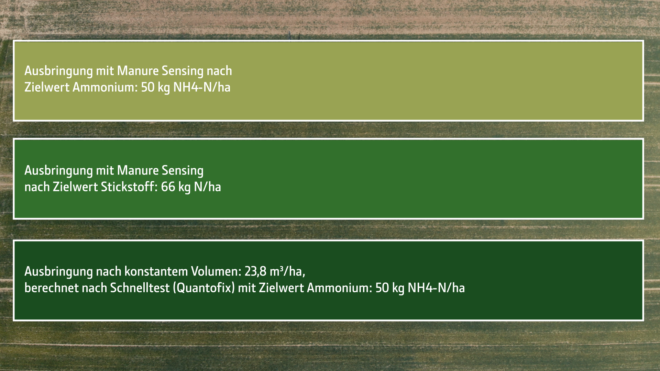 Can you tell us a little more about your trials and inves­ti­ga­tions?

We have been conducting slurry trials in wheat using NIRS tech­nology for four years. Over that time, we have come up with different trial designs for both maize and wheat. In the 2021 season, we will also inves­ti­gate pre-sowing appli­ca­tion in maize for the first time.

When applying the slurry, we do not dose based on cubic metres, but on the amount of nitrogen it contains. There are several options for this: Firstly, according to the travel speed. This means that we drive a little faster with thick slurry and corre­spond­ingly slower with thin slurry. On the other hand, the appli­ca­tion rate can also be regu­lated via the pump speed, in that the pump rotates faster when the slurry has a higher nutrient content and slower when the content is lower. So far, we have adjusted the slurry appli­ca­tion by changing the travel speed. In the trials in 2021, we will initially make adjust­ments by changing the pump speed. We hope this will reduce the time delay between the ingre­dient quan­tity measure­ment and the actual appli­ca­tion, which should lead to more accu­rate results. 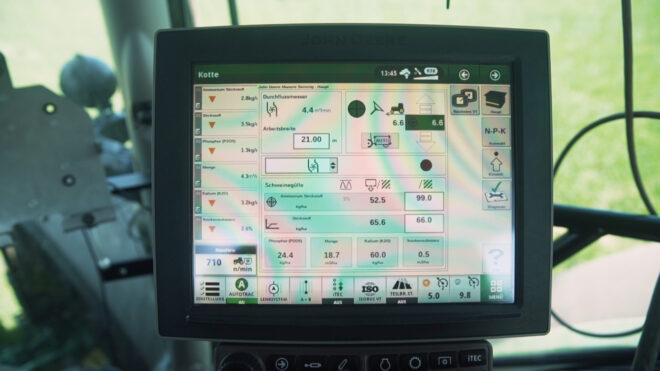 The amount of slurry applied, and its nutrient content can be read on the display

How do farmers view this tech­nology and is it offi­cially recog­nised?

NIRS tech­nology is also used in the analysis of animal feed and is there­fore not unknown to farmers. However, they are still some­what scep­tical about the tech­nology. On the one hand, this is because they know and trust tradi­tional labo­ra­tory analysis. On the other hand, there are manure-exporting and manure-receiving farms. The receiving farms have a great interest in knowing exactly what is in their manure. For the manure-exporting farms, on the other hand, it is simpler and more cost-effec­tive to work with offi­cial figures. Because of the large number of samples, both NIRS and the offi­cial rule-of-thumb figures can provide good average values.

However, NIRS offers the advan­tage of contin­uous adjust­ment in the appli­ca­tion rate. Slurry and diges­tate can be very vari­able prod­ucts, depending on what they are made from, and the nutrient content can deviate greatly from average values. When spreading slurry or diges­tate using NIRS tech­nology, a certi­fied cali­bra­tion curve approved for the substrate must there­fore be stored so that the values are recog­nised for legisla­tive docu­men­ta­tion.

Further­more, I also see an accep­tance beyond agri­cul­ture and among consumers, because I have the impres­sion that every­thing that is regu­lated by tech­nology and not by humans is seen as more accu­rate and reli­able in many areas. For example, we trust navi­ga­tion systems and do not ques­tion when we are shown a certain route or a traffic jam. I can imagine the day when this is the case with a certi­fied NIRS tech­nology. 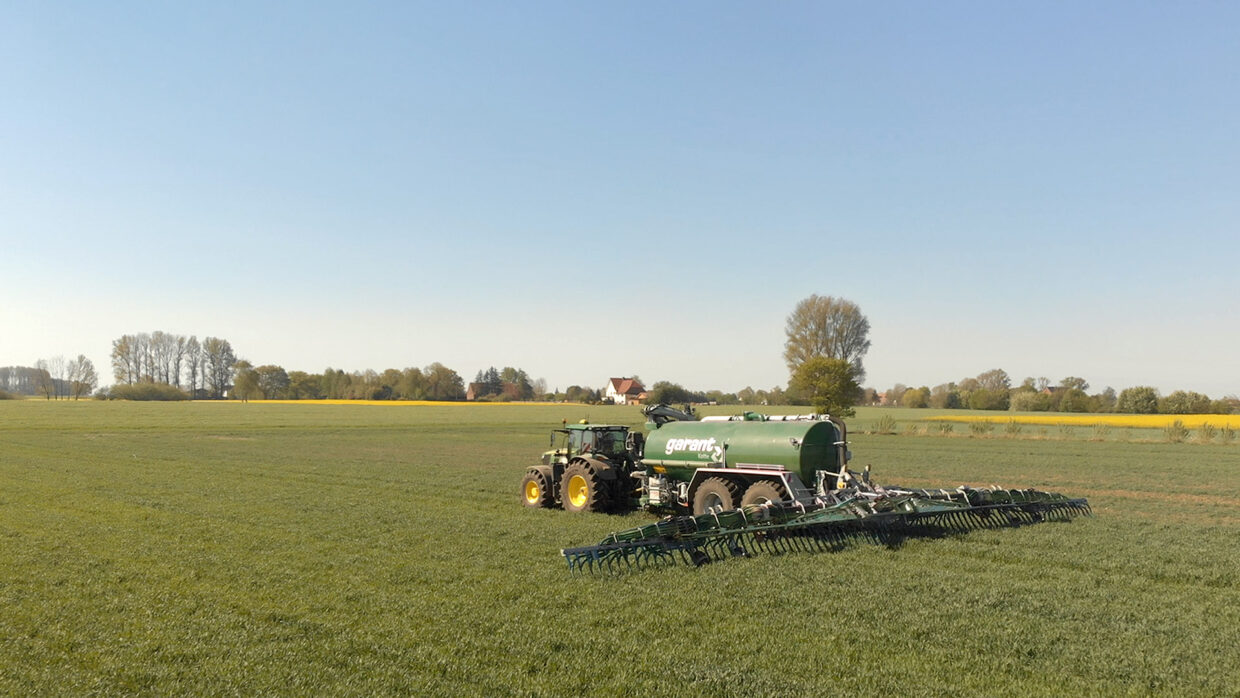 What would be the fastest way for this tech­nology to enter prac­tice?

I can see NIRS being used more by contrac­tors than by farmers. Contrac­tors, as service providers, can take over both the slurry spreading and docu­men­ta­tion. On the one hand, the tech­nology is asso­ci­ated with costs, and on the other, there are constant changes both in the appli­ca­tion tech­nology – for example from drop hoses to injec­tors – and in the sensor tech­nology. Only larger farms can afford the speed of change. Added to this is the high work­load of live­stock farms.

Further­more, contrac­tors can offer addi­tional services like creating appli­ca­tion maps, bringing even greater bene­fits to their clients. Many farmers can also see the advan­tages of using a contractor. For example, they don’t have to invest in such tech­nology before a gener­a­tional change is due. And the addi­tional appli­ca­tion costs are only incurred for the area worked, while the finan­cial advan­tages (through higher yields) deter­mined in our trials can still be felt.

Today, the Haus Düsse Trial and Training Centre serves the North Rhine-West­phalia Chamber of Agri­cul­ture as a central educa­tional and trial facility for animal and plant produc­tion. The Haus Düsse site is also home to other agri­cul­tural facil­i­ties.

Agri­cul­ture is gener­ating more and more data, and more and more farmers are engaging in preci­sion farming. Insightful facts and figures on the topic of digi­tal­i­sa­tion.﻿

Agri­cul­tural contractor AIS Schier has been focusing on core fertiliser and lime appli­ca­tions for many years. General manager Holger Schier describes how they even out the pH value of a field and why this approach is a good starting point for preci­sion agri­cul­ture.﻿