Working grapevines on steep slopes is as tradi­tional as it is demanding. Three students are looking to simplify the process, and to save wine­makers time and effort with the help of “Bacchus” soft­ware.

The cham­pagne is already chilled and waiting. And it won’t be long before Philipp Bletzer, Maxi­m­ilian Dick and Julian Herrlich can raise a glass in toast to making their first customer’s life as a wine­maker easier. And sooner or later, the three of them will even enjoy a drop of the cold stuff that they have helped to culti­vate. Admit­tedly, their contri­bu­tion will be more indi­rect than it had been in their younger years, when they worked in their homeland’s vine­yards. But it will be an equally impor­tant contri­bu­tion nonethe­less. The three students have devel­oped soft­ware that lightens wine­growers’ work­load: Bacchus. The soft­ware promises to provide a quick overview of the complex processes involved in making good wine.

Currently, grape growers are still having to juggle copious amounts of pens, paper and lever arch files to manage their admin.

“Currently, grape growers are still having to juggle copious amounts of pens, paper and lever arch files to manage their admin,” explains Mr Bletzer. “This is where digi­tal­i­sa­tion can offer a number of advan­tages. For example, the data can be accessed, anytime and anywhere.” He came up with the idea for the soft­ware in a course on “Entre­pre­neur­ship” at the Univer­sity of Mannheim in Germany, where he studies Busi­ness Infor­matics.

But his interest in wine­making goes back much further: To the grapevines of Bad Dürkheim along the German wine route, the Wein­straße. “My grand­fa­ther is a wine­maker, so I saw a lot of the day-to-day work that goes into grape growing from an early age,” says Mr Bletzer. It is this child­hood affinity to vine­yards that he shares with his colleagues. Mr Dick also grew up in the Palati­nate region, while Mr Herrlich comes from the vine­yards of Saxony, where, just like in the South West, wine has been grown for centuries. 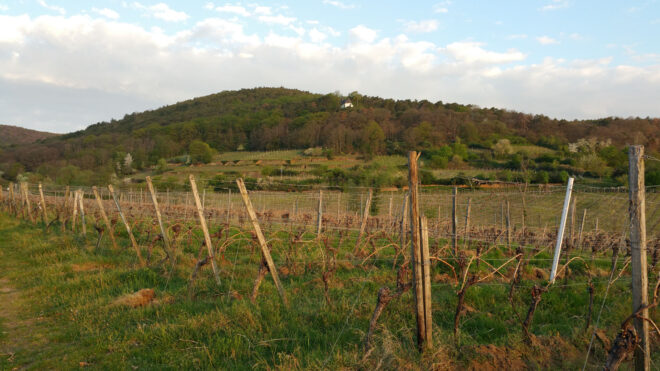 With their app, the young men want to save wine­makers time and nerves – and enable them to concen­trate on the essen­tials.

For the three 25-year-olds, the fact that the grape growing trade is one char­ac­terised by tradi­tion does not nega­tively impact their software’s chances of success. “There’s a gener­a­tional change happening in many wineries, and younger wine­makers are starting to see the bene­fits of digi­tal­i­sa­tion,” says Mr Bletzer.

To develop Bacchus, the three budding soft­ware devel­opers worked with wineries big and small and of distinct growing philoso­phies, finding out about the diffi­cul­ties they face as well as their needs. The result: A ‘fruitful’ soft­ware that allows vine­yard processes to be co-ordi­nated via an intu­itive user inter­face. Mr Dick explains: “If, for example, part of a wire fence in a vine­yard is broken, growers can track it by setting GPS markers in the app. Wine makers often keep a record of damage like this by colour-marking corner posts – they then have to drive all the way back across the vine­yard or explain to the staff where the spot is so they can mark it for them. With our soft­ware, there is no loss of infor­ma­tion.” 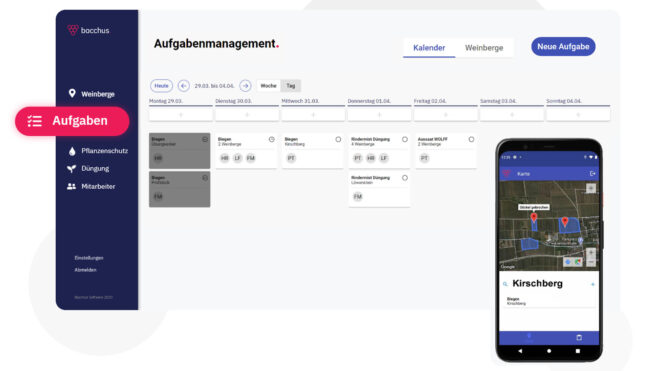 The inter­face of the soft­ware: The programme should func­tion simply and intu­itively.

Pivotal in preventing this loss of infor­ma­tion is vine­yard geodata from the land registry office, which wine­growers can import into the app “with just a few clicks,” Mr Bletzer says. Above all, it is impor­tant to the three digi­tisers that the Bacchus soft­ware works simply and intu­itively. Mr Herrlich sees the soft­ware bene­fiting future users by saving them both time and effort: “A wine­maker with 60 indi­vidual vine­yards spread gener­ously around the region has to co-ordi­nate all the sepa­rate jobs that need doing: Who does what, when and where?”

To name just one example, Bacchus enables precise and paper­less docu­menting of the pesti­cides wine­makers use, some­thing which they are obliged to do. The same applies to fertilisers. All employees who have the app installed on their devices can see exactly where records need updating.

We continue to develop the soft­ware in collab­o­ra­tion with our customers so that it meets wine­makers’ needs.

Currently, Messrs Bletzer, Dick and Herrlich are also consid­ering the possi­bility of Bacchus versions in other languages. “We continue to develop the soft­ware in collab­o­ra­tion with our customers so that it meets wine­makers’ needs,” says Mr Bletzer. Long term, he and his colleagues would like to develop an oper­ating system which can be used to oversee and control all vine­yard processes. Short term, however, there is only one thing on their minds: Popping open a bottle of cham­pagne.

The family-run organic farm Bio Alberti combines tradi­tional farming with modern processing tech­niques – and produces goods both for the nearby village and the global market­place.﻿