The family-run organic farm Bio Alberti combines tradi­tional farming with modern processing tech­niques – and produces goods both for the nearby village and the global market­place.

Imagine all that is good about Italian food: The best pasta, beef, olive oil, pulses and risotto. A wide variety of prod­ucts – and yet one farm in the rolling hills of Umbria produces them all. Welcome to Bio Alberti, a family-run organic farm that is enough to make your mouth water.

For the region, this is a big farm: 560ha, much of which is in a rota­tion of cereals, pulses and grass leys, along­side more ancient olive groves. Organic for the past 21 years, this farm is a pleasant combi­na­tion of ancient and modern: Tradi­tional farming prac­tices meet modern processing tech­niques, while the burgeoning busi­ness both regen­er­ates the tiny stone-built village around it and reaches out to the global market­place.

This is a true family enter­prise – it’s been in the family since 1940, passing through the hands of Guido and Paola Alberti towards their chil­dren, Andrea and Benedetta. “My father studied agri­cul­ture at univer­sity and is an agron­o­mist – he knows a lot of stuff which I have to learn,” admits Andrea. “But I studied economics and busi­ness admin­is­tra­tion at Rome Univer­sity, and I’m doing the inter­na­tional sales, trav­el­ling to London and other places as well as working on the farm. It’s nice, because you’re not doing the same thing every day.” 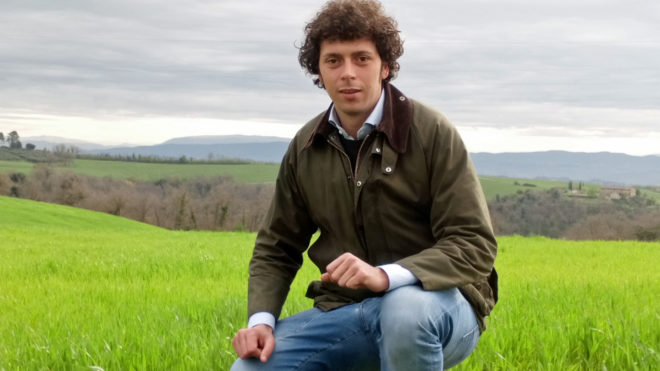 Andrea Alberti studied in Rome, trav­elled through Europe and now looks after the farm, which has been family-owned since 1940.

Benedetta handles the Italian sales, and recently trained as an olive oil somme­lier in order to improve the quality of the farm’s olive oil. “It’s more diffi­cult to produce than a field crop as you can’t control the pests and diseases – some years you don’t get any crop at all as you don’t want to sell a bad oil,” says Andrea. “Yields vary wildly from one year to the next, but we are trying to improve the quality and consis­tency.”

The farm has 4000 olive trees, the fruits from which are hand-picked and cold pressed locally within 48 hours to preserve their quality, but we press them within 12 hours. “You should choose your olive oil like you choose wine – you need a different oil for fish than a salad, and we have four different vari­eties. We sell extra virgin olive oil through a distrib­utor to the UK, France, Norway, US, China, and Czech Republic – around 40% of our sales are over­seas and 60% domestic.” 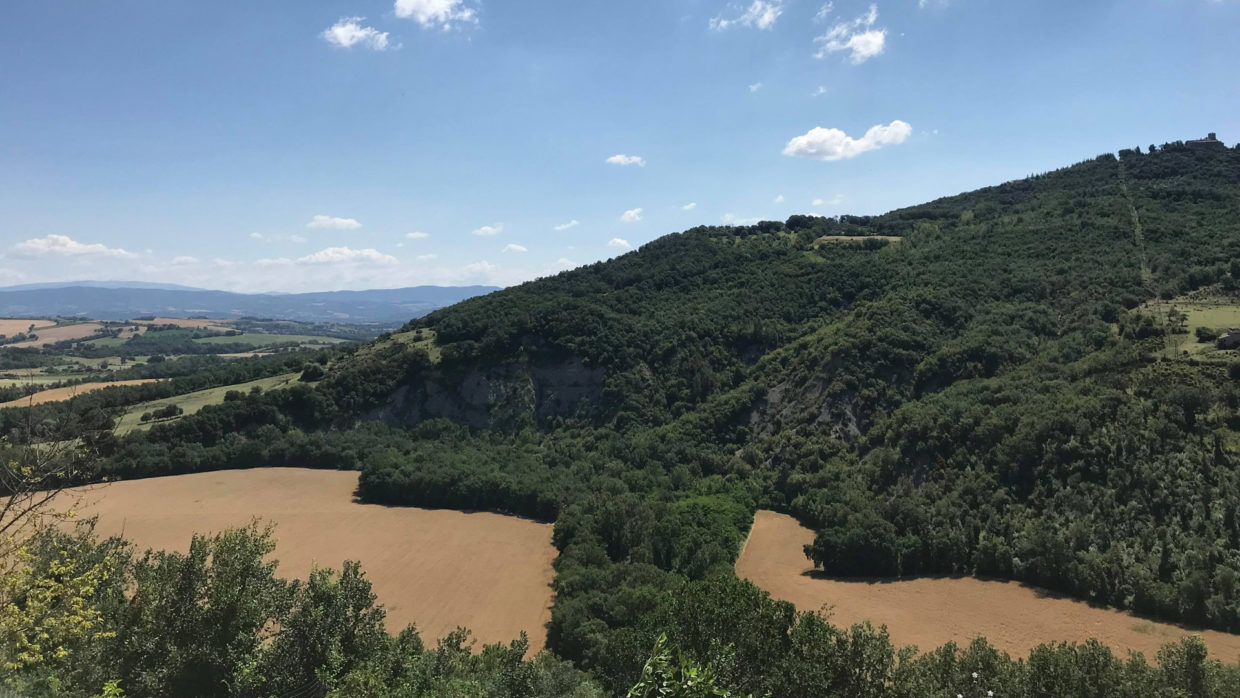 Alberti Bio grows a lot of tradi­tional wheat vari­eties – but not by them­selves. Instead, they prefer to co-crop them in the field. 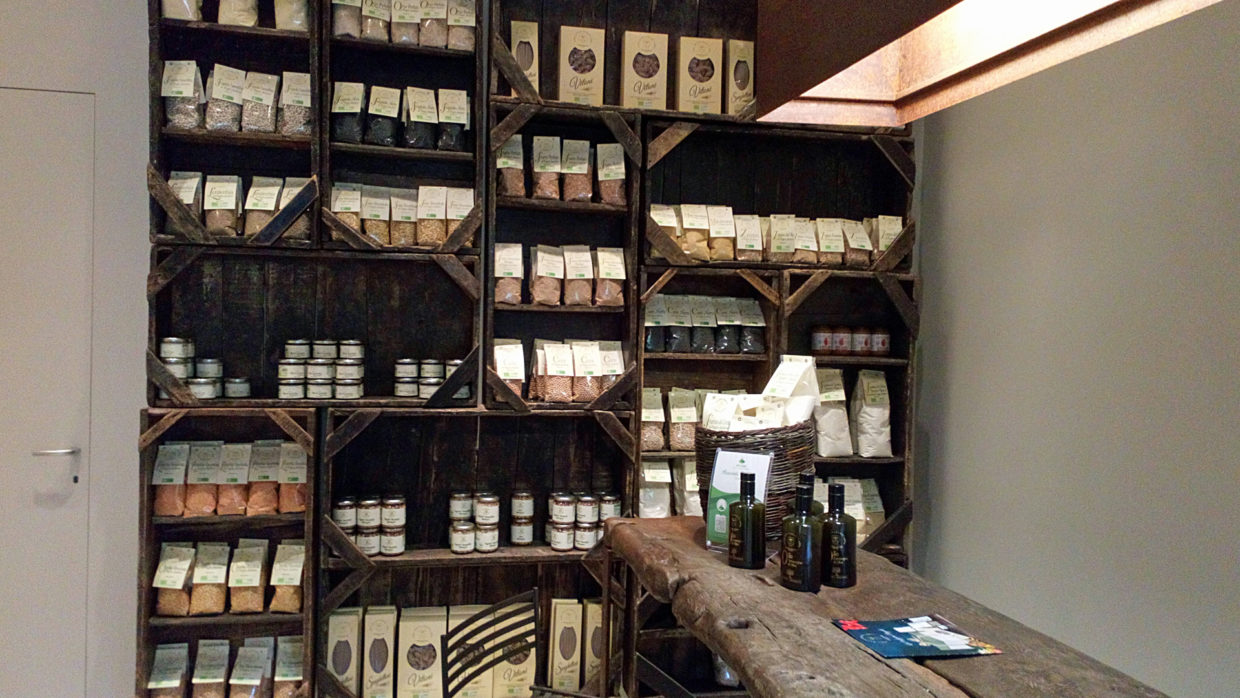 All prod­ucts on sale are produced locally and packed by hand.

Due to a mixture of good marketing and a respect for the envi­ron­ment, the family has adopted a range of tradi­tional farming prac­tises, including growing monoc­cocum spelt – the oldest cereal in the world. “It was grown in Roman times, and has a small grain with a low yield, but it is good for risotto and an alter­na­tive to wheat flour. We started out by growing 1x1m trials for a project with the Univer­sity of Perugia and now we grow 20ha of it.”

Andrea also grows a lot of tradi­tional wheat vari­eties – but not by them­selves. Instead, he prefers to co-crop them in the field. “It’s better to mix in the field than in the mill – it outcom­petes the weeds and you can get better yields.” One such mix this year is a third each of Verna, Gentil­rosso soft wheat and durum wheat – the resulting flour is ideal for breads, pizzas and pastas.

The busi­ness sells through its own website as well as through retailers, whole­salers and restau­rants, and a jewel in its crown is Sena­tore Cappelli, an ancient durum which was redis­cov­ered only a few years ago. “We used to produce a lot in southern Italy, and although it has lower yields than modern vari­eties, at around 2-2.5t/ha, it makes a great pasta – you can really see the differ­ence in the colour alone,” says Andrea.

It’s better to mix in the field than in the mill – it outcom­petes the weeds and you can get better yields.

Given its organic status, the farm has a strong rota­tion including lentils, chick­peas, chick­ling, borlotti, black and cannellini beans, and millet. “We use the same drill for them all, but each year we try different tech­niques. Last year we drilled the lentils one month early to see if they’ll be any better, while with the spring-drilled millet we left the autumn regrowth and harrowed before drilling,” says Andrea.

“We also use the same combine for every­thing but we need to clean it care­fully.” Cereals are cut around the end of June, while the legumes are cut in July. “At the moment we don’t have sepa­rate cleaning machinery for gluten-free legumes, so that will be the next invest­ment.” 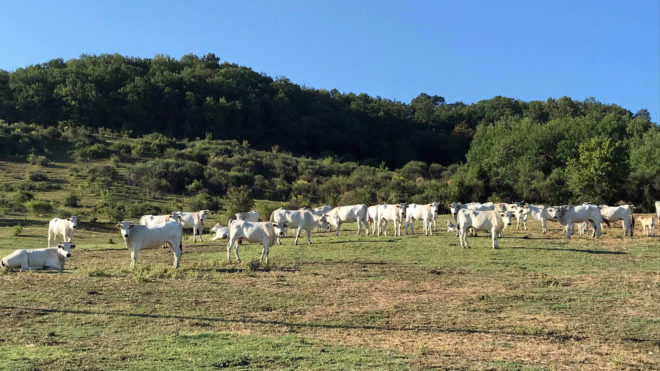 Around 250ha of the farm goes down to a herbal grass mix, which is either grazed or cut for hay to feed the 200 Chianina beef cattle.

The grain store sits along­side the small processing facil­i­ties, with 10 silos for different prod­ucts and temper­a­ture-controlled storage at 18°C. All of the prod­ucts are produced locally and packed by hand.

In keeping with its organic status, the farm hosts 50 beehives for a local beekeeper. It also has access to irri­ga­tion through two lakes, although the cereals and legumes gener­ally don’t require it, given that Umbria is one of the wettest coun­ties in Italy, earning it the moniker ‘the green heart of Italy’.

Around 250ha of the farm goes down to a herbal grass mix, which is either grazed or cut for hay to feed the 200 Chianina beef cattle. This ancient breed is prob­ably best known for its use in the recipe Bistecca alla Fiorentina (Floren­tine steak) which use a thick-cut porter­house steak, cooked rare and flavoured simply with salt and pepper.

We believe in organic for our food, and feel it’s really impor­tant for the envi­ron­ment – we hope it will be the future for our people.

“We calve all year round and keep two dairy cows as suck­lers as the Chianina don’t produce much milk – the calves just suckle the dairy cows direct,” says Andrea. “We’ve got two bulls and finish the progeny at around 20 months old off grass – we don’t feed any concen­trates.”

In a bid to close the loop, the family plans to open a restau­rant in the tiny village of San Venanzo, where they already run farm-stay accom­mo­da­tion. “There are only 24 inhab­i­tants in the village; we’ve got five agri­t­ur­ismo apart­ments and are reno­vating the dilap­i­dated old house too. We believe in organic for our food, and feel it’s really impor­tant for the envi­ron­ment – we hope it will be the future for our people.”

The sound is both exhil­a­rating and deaf­ening. This is Switzer­land at its tradi­tional best: Hundreds of brown cows – complete with cow bells - returning from the alpine pasture to their winter homes, creating a festival for tens of thou­sands of people. Welcome to the Alpa­b­fahrt - the Alp Descent.﻿