Together with Saaten-Union, John Deere is looking for new ways to opti­mise drilling. To do this, tech­nical exper­tise and agro­nomic knowl­edge must go hand in hand.

What do the machinery company John Deere and the plant breeding company Saaten-Union have in common? Customers of both compa­nies expect their prod­ucts to increase farming produc­tivity. And both compa­nies have product devel­op­ment cycles which last longer than 10 years. There­fore, they must both recog­nise market trends early, allowing these to feed into product devel­op­ment. With this in mind, the two compa­nies started a large-scale seeding project, in an attempt to maximise the poten­tial of high-value seeds by making storage more precise and improving growing condi­tions.

The trend towards growing hybrid cereals has been increasing consis­tently for years. Barley and rye already come in a wide variety of culti­vars, there aren’t many conven­tional vari­eties of oilseed rape left, and it goes without saying that maize, soya and sugar beet are hybridised. The bene­fits are evident. “For the most part, hybrids can cope better with diffi­cult envi­ron­mental condi­tions and can achieve 10% higher yields or more,” says Daniel Husmann, product manager at Saaten-Union.

To provide the best tech­nical support for such trends, increasing agro­nomic capa­bil­i­ties using machines, digital solu­tions, and other services is an impor­tant aspect of product devel­op­ment at John Deere. To keep up with the customers’ high expec­ta­tions of improved machine produc­tivity, the machines are thor­oughly tested in the produc­tion depart­ment and in the field.

Every seed must become a success

In addi­tion to improved genetic poten­tial, success of the crop also depends on the seed and crop manage­ment. Since seed rates are so low for hybrids, it is impor­tant to make sure sophis­ti­cated tech­nology is used. A good fertiliser and plant protec­tion strategy is also neces­sary to accom­pany the plant stock success­fully through the season. Only if every seed and drop counts can agri­cul­ture have a more effi­cient and sustain­able future. 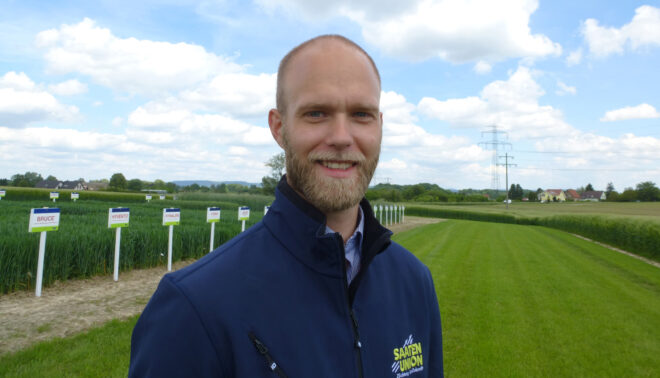 Daniel Husmann in front of a field exper­i­ment.

For row crops like maize, John Deere already offers excel­lent tech­nology to opti­mally posi­tion the seeds. Now it wants to bring this level of preci­sion to small grains. With this in mind, John Deere together with Saaten-Union set up a field exper­i­ment which worked with a huge variety of seed quan­ti­ties and drilling vari­a­tions. The part­ners involved the entire produc­tion system. “The more specific the grain prop­er­ties and seedbed condi­tions, the better we have to adapt the fertiliser and plant protec­tion measures,” explains Mr Husmann.

How were the trials designed?

The trials were designed so that the effects of reduced seed rates could be analysed while adjust­ments were made to crop manage­ment as well. “We wanted to achieve the maximum economic yield, as well as the desired quality, with the lowest possible input use,” explains Stefan Kübler, agron­o­mist at John Deere.

The loca­tions chosen for the trials have very good soils. However, both fields are located in the rain shadow of the Harz moun­tains, meaning the average annual precip­i­ta­tion is only around 470–550mm – and often lower – with a remark­ably dry early summer season.

The more specific the grain prop­er­ties and seedbed condi­tions, the better we have to adapt the fertiliser and plant protec­tion measures

The plan for the trials included a conven­tional type and hybrid type of wheat, up to five seed rates, from 60-280 seeds/m², two fertiliser treat­ments with urea or nitrate-enhanced fertiliser (KAS), and three different plant growth regu­la­tors. Low seed rates were drilled with a Monosem NG planter, whereas for higher rates conven­tional volume-based drilling tech­nology was used.

For half of the plots, a readily avail­able ammo­nium nitrate fertiliser was applied as needed in three doses. The other plots received two early doses of urea, the effects of which are quite slow, which saved doing another drive across these trials and coun­ter­acted the increasing dryness of early summer. The diagram shows nitrogen quan­ti­ties next to the fertiliser treat­ments.

We wanted to achieve the maximum economic yield, as well as the desired quality, with the lowest possible input use

Preci­sion seeding showed signif­i­cant bene­fits compared with volu­metric dosing. But there are currently no machines avail­able to put this into prac­tice.

There are clear differ­ences between the combi­na­tion of fertiliser and plant growth regu­lator treat­ments. Higher yields in the urea treat­ments were due to the damp, cool weather of 2021, which reduced the escape of ammonia and facil­i­tated good perme­ation into the soil. Regarding the plant growth regu­lator treat­ments, the yield increase of 4dt/ha between KAS/Prodax® and Harnstoff/Prodax® was partic­u­larly remark­able. With this variant it is also possible to save one appli­ca­tion work step.

The protein values of the fertiliser treat­ments showed no major devi­a­tions from the mean. On the whole, this means a better effi­ciency in nutrient util­i­sa­tion in areas with higher nitrate concen­tra­tion in partic­ular, a change to the strategy should be consid­ered.  Correctly applied urea reduces nitrogen run off and ensures long-term supply of plant-avail­able nitrogen through hydrol­ysis and nitri­fi­ca­tion processes in the soil. 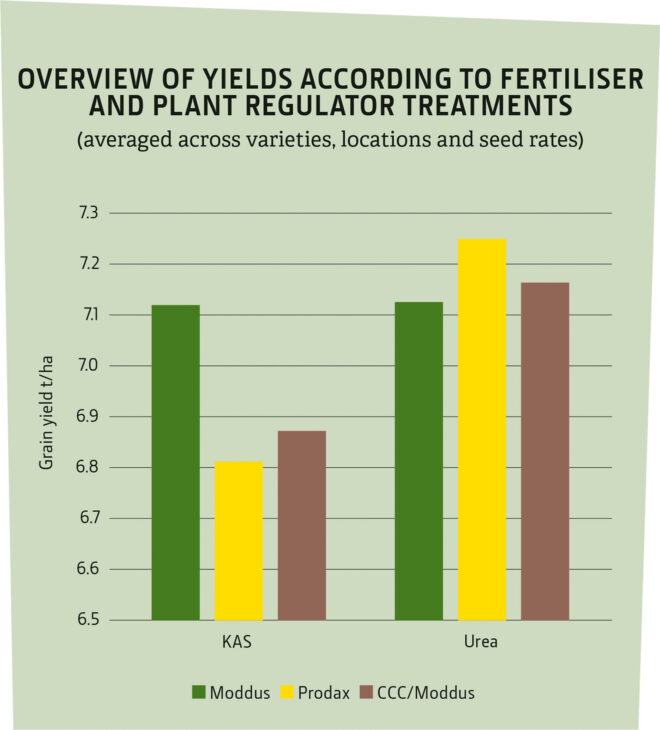 Another inter­esting result can be seen in the compar­ison of yield perfor­mance in rela­tion to the number of seeds/m2. In the compar­ison of seed rates (100, 160 and 220 seeds/m2) against both fertiliser types and strate­gies and plant regu­lator vari­ants, the middle seed rate proved to be the most effec­tive. An average addi­tional yield of 0.2–0.3t/ha was achieved, which, assuming wheat is priced at €220/t (£183/t), amounts to an addi­tional revenue of around €44–66/ha (£37-55/ha).

Combined with the approx­i­mately 27% saving on seeds, it is possible to achieve an increase in the gross margin of €50–90/ha (£42-75/ha) and more. Thanks to their genetics, most modern wheat vari­eties are able to compen­sate for differing seed rates and to achieve consis­tent results. This is espe­cially the case for the preci­sion seeding process, which was also inves­ti­gated. However, preci­sion seeding with extremely small seed quan­ti­ties also carries a large risk – each plant must have a successful result. By contrast, sowing rates over 250–300 seeds/m² are only required or viable with very unfavourable condi­tions (preceding crop, seedbed, pests, etc).

The tighter the envi­ron­mental constraints and more cost-inten­sive the produc­tion systems, the more precise the tech­nology must be to favour optimal plant devel­op­ment. There are also high-performing vari­eties yet to be discov­ered. John Deere and Saaten-Union are working on making the most of this poten­tial.

Carsten Behr and Ulrich Löhrs’ fami­lies have lived next to one another for gener­a­tions. But being good neigh­bours means more than just that. One of these farm managers uses conven­tional means, the other organic. Last autumn, both farmers entered into a farm part­ner­ship for the FINKA biodi­ver­sity project. Will it succeed?﻿