Soya imports are becoming more and more expen­sive and get increas­ingly crit­i­cised, espe­cially for organic live­stock farms. In Scan­di­navia, feed and seed manu­fac­turers are about to commer­cialize a protein feed concen­trate made from grass, clover, and alfalfa for non-rumi­nants such as pigs and poultry.

“We’ve managed to produce an organic protein concen­trate from grass, clover and alfalfa with a raw protein content of 50-60% that we can substi­tute for soya-meal (46%) on a one-to-one-basis,” says Vagn Hunde­boell, managing director of BioRe­fine. He runs the company’s produc­tion facil­i­ties set up in Varde on the Danish western island of Jutland. BioRe­fine is jointly owned by the three Danish ag groups DLG (50%), Danish Agro (25%) and DLF (25%).

Mr Hunde­boell has a long personal history of extracting protein from alfalfa and similar crops. “I started working with this in the 1980s within the DLG group, but the time wasn´t right and we had tough global compe­ti­tion, so I went into the field of logis­tics and supply chains. But when this chance came up, I did not want to miss it,” Mr Hunde­boell recalls. 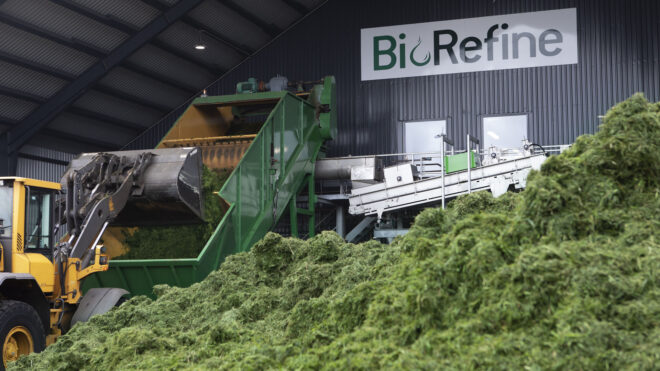 The produc­tion is based on estab­lished bio-refinery tech­nology – but without the advances in modern biolog­ical research it would not have been such an easy task.

The pres­sure on Euro­pean feed producers and espe­cially organic live­stock farms to come up with alter­na­tives to imported soya – which is not widely produced in Europe – has increased in recent years. This has added to the incen­tives to find domes­ti­cally produced protein sources. So, in 2019 BioRe­fine was created and last year it acquired and remod­elled an old feed plant in Varde, where it started up trial produc­tion. “Last year (2021) we produced a couple of hundred tonnes of our protein concen­trate,” says Mr Hunde­boell.

The produc­tion is based on estab­lished bio-refinery tech­nology – but without the advances in modern biolog­ical research it would not have been such an easy task. The process relies on freshly cut grass from a specific seed mix. Within a few hours, the finished protein concen­trate, which has a texture similar to ground coffee, is ready to be shipped to feed producers for feed compound produc­tion. 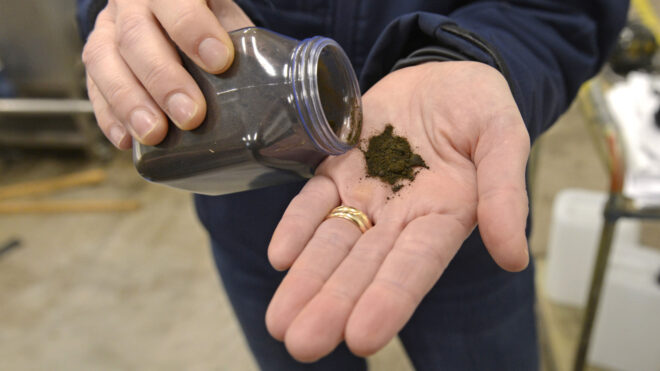 Within a few hours, the finished protein concen­trate, which has a texture similar to ground coffee, is ready to be shipped to feed producers for feed compound produc­tion.

In Denmark, grass reaches its highest protein content in early May, red clover at the end of May, white clover at the begin­ning of June and alfalfa at the end of June. “Tailoring our seed mixes to that helps to main­tain good quality raw mate­rial throughout the season,” Mr Hunde­boell explains.

Timing is of the essence here and it contrasts starkly with the much less time-sensi­tive grain produc­tion that it is partly expected to replace. Contracted farmers are respon­sible for seeding and crop manage­ment during the growing season, but BioRe­fine takes care of the harvesting with a well-organ­ised logis­tics chain from field to produc­tion plant. This ensures a time-sensi­tive harvest in the best possible condi­tion. “You have to have a quick produc­tion process, other­wise you risk losing too much of the protein,” explains Mr Hunde­boell. “After 13-14 hours you may have lost some 40% of the protein.”

From some hundreds of tonnes produced in 2021 from roughly 500ha, Mr Hunde­boell expects BioRe­fine to increase produc­tion this year to 7,000t from contracted farmers culti­vating about 3,000ha. The goal, however, is set much higher. Denmark imports about 2m tonnes of soya-meal per year, of which roughly 70,000t are organic. And to replace that amount of organic imports with domes­ti­cally-grown protein is real­istic, he says. “It will take some acreage from grain farming, but not in any substan­tial way,” he adds.

The raw mate­rial is cut and chopped as fresh as possible. It mainly consists of clover, grass, and alfalfa, and is usually collected within 30 km of the plant.

At the receiving plant, the raw mate­rial is pressed to produce two sepa­rate parts. One is the so called “green juice”. The other is a green fibre mass. The liquid part contains proteins digestible by pigs and chickens.

The green fibre can be used for biogas produc­tion and in the long term it is expected to be used for pack­aging, textiles, insu­la­tion, and other forms of upcy­cling.

As the green juice is heated inside the processing plant, the proteins clump together - just like when you boil an egg. Then the juice is centrifuged, sepa­rating the liquid frac­tion and the proteins.

After centrifuging, the proteins are dried, which produces a brown powder. The product is then filled in big bags and can be used for chickens, pigs and cows, replacing, for example, soya cake.

The last bi-product from the centrifuging and drying process is a so called “brown juice”. That could be re-cycled as a fertil­izer on the fields, as well as used in a biogas plant.

Hover over the numbers to learn more about the produc­tion steps. (Source: BioRe­fine)

While organic food prod­ucts have strug­gled at times in the consumer market, the produc­tion method is gaining a foothold as a more sustain­able way of farming. In Denmark, organic food has achieved an impres­sive market share in some niches. Organic eggs, for example, account for 40% of the market and milk, some 33%. The number of organic pigs is stable at around 460,000. 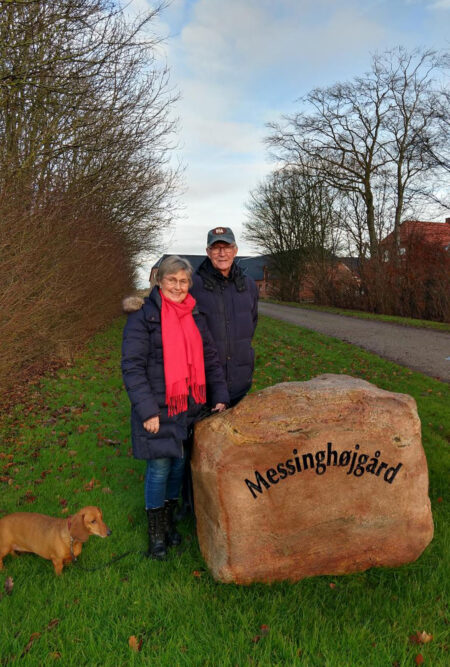 Nils Erik Nielsen, based in Vard on the west coast of the island of Jutland, is one of the farmers who worked with BioRe­fine in 2021.

Mr Hunde­boell agrees BioRe­fine will have to offer growers compa­rable or better income for taking deliv­eries from their contracted farmers compared to grain crops. In addi­tion growers must meet the required spec­i­fi­ca­tion, mainly concerning protein content. “We aim for a protein content of 20% but we can accept it from 18 to 22%,” says Nils Erik Nielsen, a farmer based in Vard on the west coast of the island of Jutland, who worked with BioRe­fine in 2021.

Mr Nielsen runs an organic farm of 70ha, comprising 20ha of oats or barley and 50ha of grass. “It has worked well so far and I have no complaints. BioRe­fine cut the grass promptly when the weather allowed,” Mr Nielsen says. He had hardly any prob­lems with the crop: “As soon as it had estab­lished it devel­oped very well and we reached an accept­able protein content and a rela­tively good yield. We’re paid according to dry matter and protein content. Although you would like to be paid as much as possible, I am ok with the payment I received in 2021.”

During a good year, BioRe­fine hopes to be able to cut the grass at Mr Nielsen’s and other partic­i­pating farmers’ farms five times during a season. If alfalfa is in the seed mix, it aims for four cuts.

Produc­tion of a premium protein concen­trate that matches the qual­i­ties of soya, could create a busi­ness oppor­tu­nity for BioRe­fine and its stake­holders. But it was never intended that its knowl­edge should remain the exclu­sive prop­erty of BioRe­fine, according to Morten Bye-Jensen, researcher at the Depart­ment of Biolog­ical and Chem­ical Engi­neering at Aarhus Univer­sity. “There was a lot of talk among the Danish part­ners that we would not hide our expe­ri­ences. We need to learn from each other, so we want it to stay open.”

Researchers at the Swedish Univer­sity of Agri­cul­tural Sciences (SLU) took a different approach to the tech­nique and carried out trials on six-to-12 weeks-old weaners at the Sötåsen Farm School. Instead of using fresh-cut grass, they used juice from grass silage, producing a protein powder. “We reduced the protein from conven­tional feed sources by 10% and replaced it by with grass protein,” says Anna Wallen­beck, live­stock produc­tion lecturer at SLU. “So, if the juice didn’t add anything to the feed, the weaners should have performed worse than the control group, but they didn´t. They grew as fast and some even faster.” Dr Wallen­beck says the trials at Sötåsen farm school will continue, with machines and equip­ment for producing the final protein powder purchased for further devel­op­ment.

“We have some 1m ha of culti­vated farm­land in Sweden,” says Christel Ceder­berg, professor in advanced energy at Sweden´s Chalmers Univer­sity of Tech­nology. “Producing green protein on some 100,000ha would not be impos­sible and we would have a good carbon sink source. This project has a double aim; to offer farmers the possi­bility to grow and use a domes­ti­cally produced feed as an input, and to create a protein product for organic producers that fits into a circular agri­cul­tural economy. We´re just at the begin­ning of what we can do,” she adds. 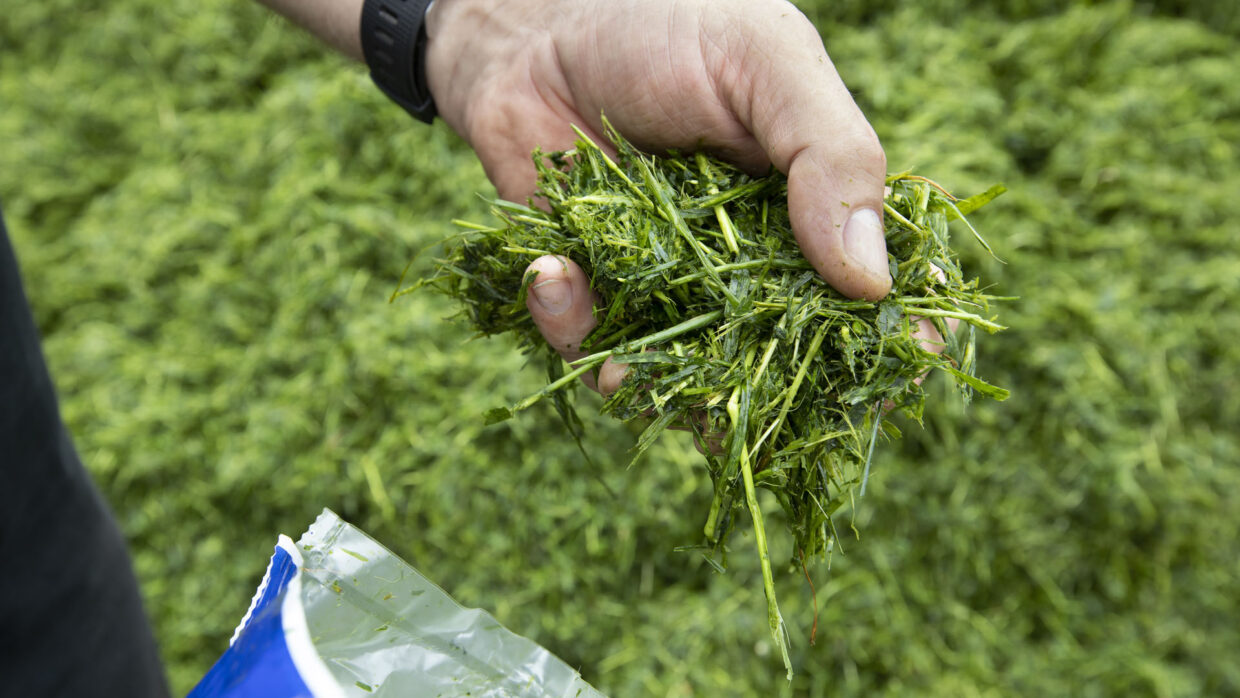 Biore­fine wants to obtain a high-quality protein concen­trate from grass that corre­sponds to the prop­er­ties of soy.

On the way to more sustain­ability

Mr Hunde­boell agrees the envi­ron­mental bene­fits are impor­tant, espe­cially as Denmark has strug­gled to meet the EU Water Direc­tive require­ments. Peren­nial crops are better at retaining soil carbon and will also reduce run-off from farm­land. So far, in Denmark, the protein concen­trate has been used in feed for egg produc­tion, resulting in a more yellow, appetising-looking yolk.

In pigs, trials have been showing good results, according to Mr Bye-Jensen, with equally matched growth and health to control groups, and no adverse effects on the eating qual­i­ties of the pig meat.

And with rising feed costs as organic soyabeans become scarcer, finding an alter­na­tive to these imports has become increas­ingly impor­tant. In December 2021, soyabeans were trading at $12.60/bushel on the Chicago exchange, and organic soya costs twice that.

“We find it more and more diffi­cult to buy organic soyabeans and we have to look at exotic markets like China and Kaza­khstan, some­times Romania,” says Mr Hunde­boell. He envi­sions BioRefine’s protein concen­trate could match conven­tional soya, espe­cially if all the envi­ron­mental bene­fits are taken into consid­er­a­tion.

As the produc­tion also creates large volumes of green fibre-mass, a market for this product is vital, econom­i­cally. Currently it is used for bio-energy produc­tion, but BioRe­fine hopes to be able to produce other prod­ucts such as textiles and pack­aging.

“We are currently co-oper­ating with a Swedish egg producer, making their egg pack­ages,” says Mr Hund­boell. “This could replace the use of paper and you could return it directly back to the fields. It´s grass!”

The autonomy level of Euro­pean animal husbandry varies depending on the protein group. Fact is: Europe will remain depen­dent on imports. However, in the long term, breeding and tech­nical advances will increase inde­pen­dence. See our inter­ac­tive graphics to find out what is happening where.﻿