Farm-produced hydrogen could provide a new revenue model for the agri­cul­tural entre­pre­neur. In the Nether­lands, a proto­type has already proven the feasi­bility of this tech­nique. The next step will be to demon­strate its economic viability and its influ­ence on the crop and the soil.

A self-propelled machine that steers itself across the fields, harvests solar energy and a H2 harvesting system that converts it into hydrogen. That is the idea behind the H2arvester (for hydrogen harvester), the first proto­type of which was tested last year in the Nether­lands. “We were looking for new ways to combine energy and agri­cul­tural produc­tion,” says co-initiator Wouter Veefkind. “In this respect, multi­func­tional land use is of great impor­tance.” 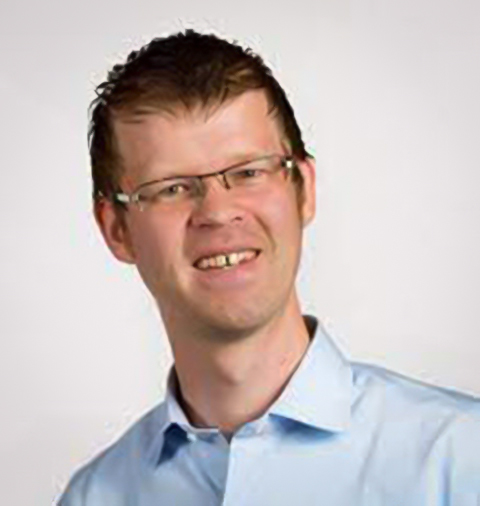 Produc­tion of H2 by elec­trol­ysis

This is where the H2arvester comes in. In 2017, this inno­va­tion was awarded a sustain­ability award by the Dutch Ministry of Economic Affairs and Climate. Since the proto­type has been in the field, interest has picked up. “There is a lot of interest from the market,” says Mr Veefkind. “On the one hand, it is a policy solu­tion as a response to the solar parks. That’s why there is now a certain urgency; we need a proof-of-concept.” This year there will start a trial at a strip cultivation plot at the ‘Farm of the future’ of the Wageningen Univer­sity & Research.

The harvesters are composed of solar panel segments supported by motorised wheelsets, which allow them to move autonomously on arable fields and grass­land; even getting across ditches, as former trials revealed. The idea here is to achieve double land use; the maximum surface covered by the moving panels would amount to 10% of the field. The yield from the solar panels is then used to produce H2 via elec­trol­ysis, the process of using elec­tricity to split water into hydrogen and oxygen. H2 could be stored on house lot of the farm and could be used to be self-suffi­cient or to share it with a co-oper­a­tive organ­i­sa­tion. 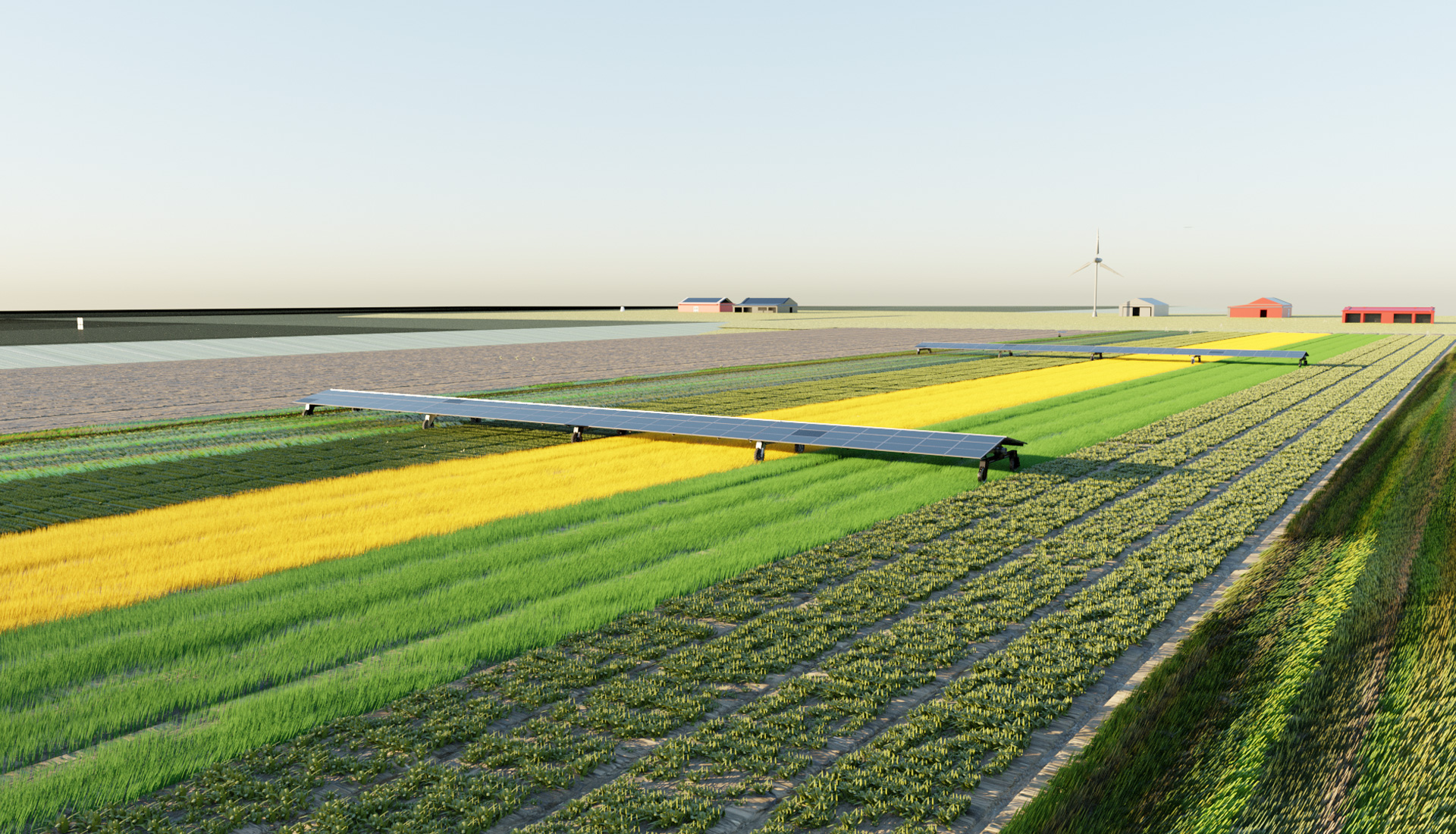 After storage H2 can be used to produce elec­tricity by fuel cells. “However this is from an ener­get­i­cally point of view, unprof­itable”, says his companion Marcel Vroom. “It would be better to apply H2 directly as fuel for trans­port, mech­a­ni­sa­tion and heating. Storage of H2 and the collected solar energy are also meant to use as seasonal storage by which the farm could func­tion energy neutral.

The next step would be to use this tech­nology during cultivation, so that it gener­ates energy and can carry an imple­ment.

The stacks that are needed for elec­trol­ysis, are getting devel­oped. Mr. Vroom explains: “The proto­type has proven itself tech­ni­cally. Now, we need a viable plan. Our system is often compared to solar panels on the roof and in terms of pricing, we are in a higher bracket. However in the Nether­lands, the H2arvester is seen as an agri­cul­tural appli­ca­tions, so we can apply for subsi­dies concerning agri­cul­tural appli­ca­tions as soon as 2023.“ He empha­sizes that H2arvester is more than only ‘mobile sun on land’. „It stands for a chain of sustain­able energy solu­tions. There­fore we are looking for part­ners and investors to jump into the role of chain director. That’s why we need to a proof of concept too.“

“The agri-industry needs to bring down its CO2 foot­print and, in that light, invest in sustain­able elec­tricity,” Mr. Vroom adds. “That’s certainly the case when it comes to logis­tics; lorries, for example, will have to run on hydrogen in the future. So if a farmer makes their land avail­able for such a tech­nology, then they can supply hydrogen to their dairy farm, for example. That gives them a new revenue model and the dairy farm can operate in a more sustain­able manner.” 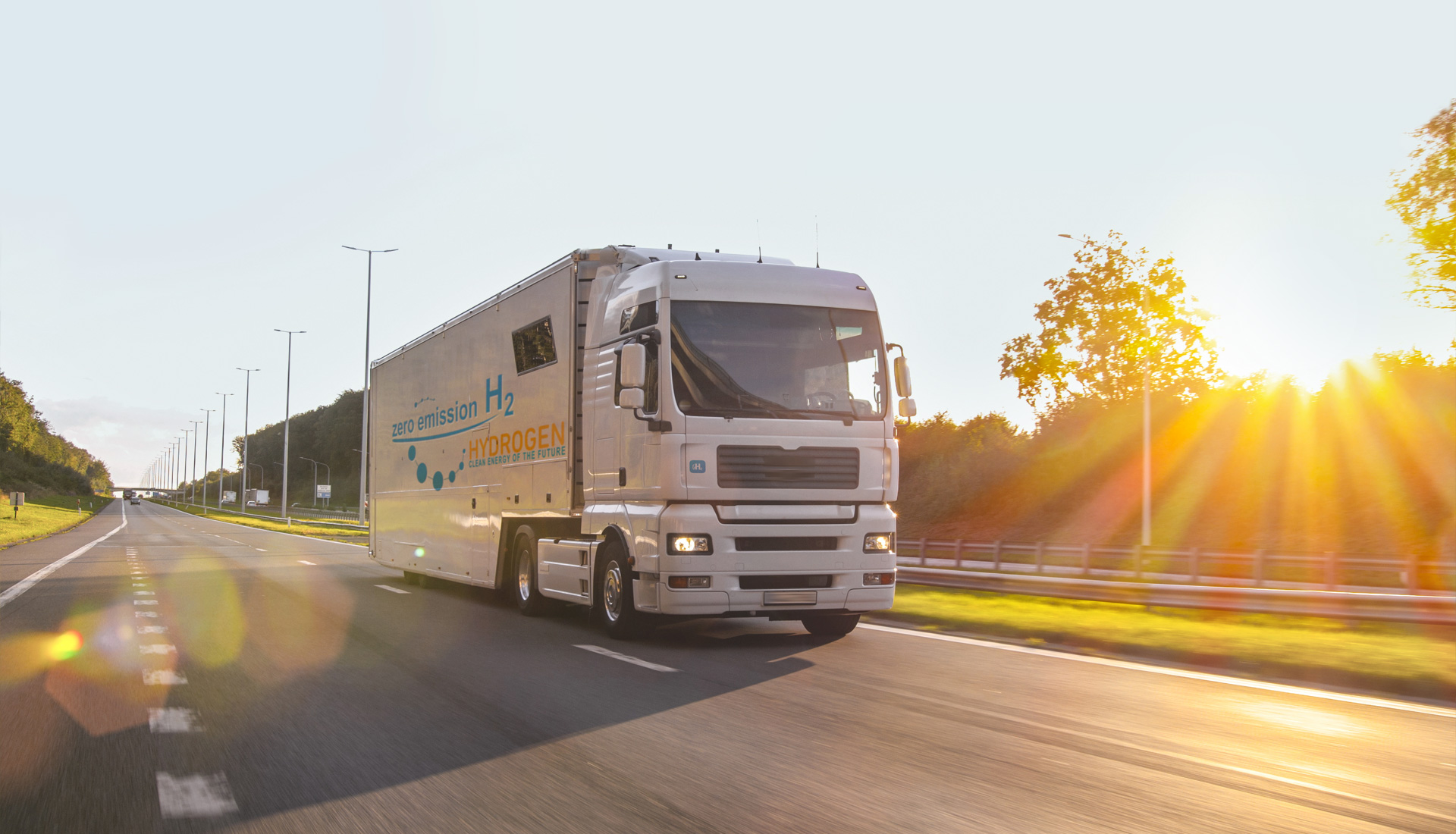 Trucks will also run on hydrogen in the future.

Or think of an arable farmer who grows a dormant crop like a winter cereal. “At this time of year, the farmer has little income, so it would be great if they could generate more income by producing energy and selling it. In this way, you build a new chain together.”

Another advan­tage is that this way of gener­ating energy does not put pres­sure on the existing elec­trical grid. “In the Nether­lands, we are already facing an capacity problem in the network, so if the energy that is produced doesn’t have to be distrib­uted on the elec­tricity network, but can be converted into hydrogen that the farmers use them­selves and suppliers can buy, then the network will not be burdened any further. It’s a win-win for both parties.”

The initia­tors are busy working out a second track. “The best thing would be if our inno­va­tion could also be used during cultivation, so that it gener­ates energy and can carry an imple­ment, for example,” says Mr Veefkind. “In arable farming, which is increas­ingly working with strip cultivation, that would certainly offer oppor­tu­ni­ties, but that is the next phase.” Mr Veefkind is feeling hopeful. “Bringing some­thing new to the market is always a chal­lenge, so we’ll just have to assume that’s part of the deal. Its about building an ecosystem. The future will tell if it is possible to sell green hydrogen at a premium.“

The conver­sa­tion around envi­ron­men­tally friendly trac­tors is gaining momentum in the agri­cul­tural industry. However, it's diffi­cult to move away from heavy depen­dency on the tradi­tional fuel, diesel. In the mean­time, ideas which could help reduce CO2 emis­sions from agri­cul­tural machinery have been put forward. ﻿

Geot­hermal, solar and wind energy, methane extracted from manure to produce high-quality natural gas and elec­tricity - there is plenty of green energy in a valley in the middle of the US desert. ﻿